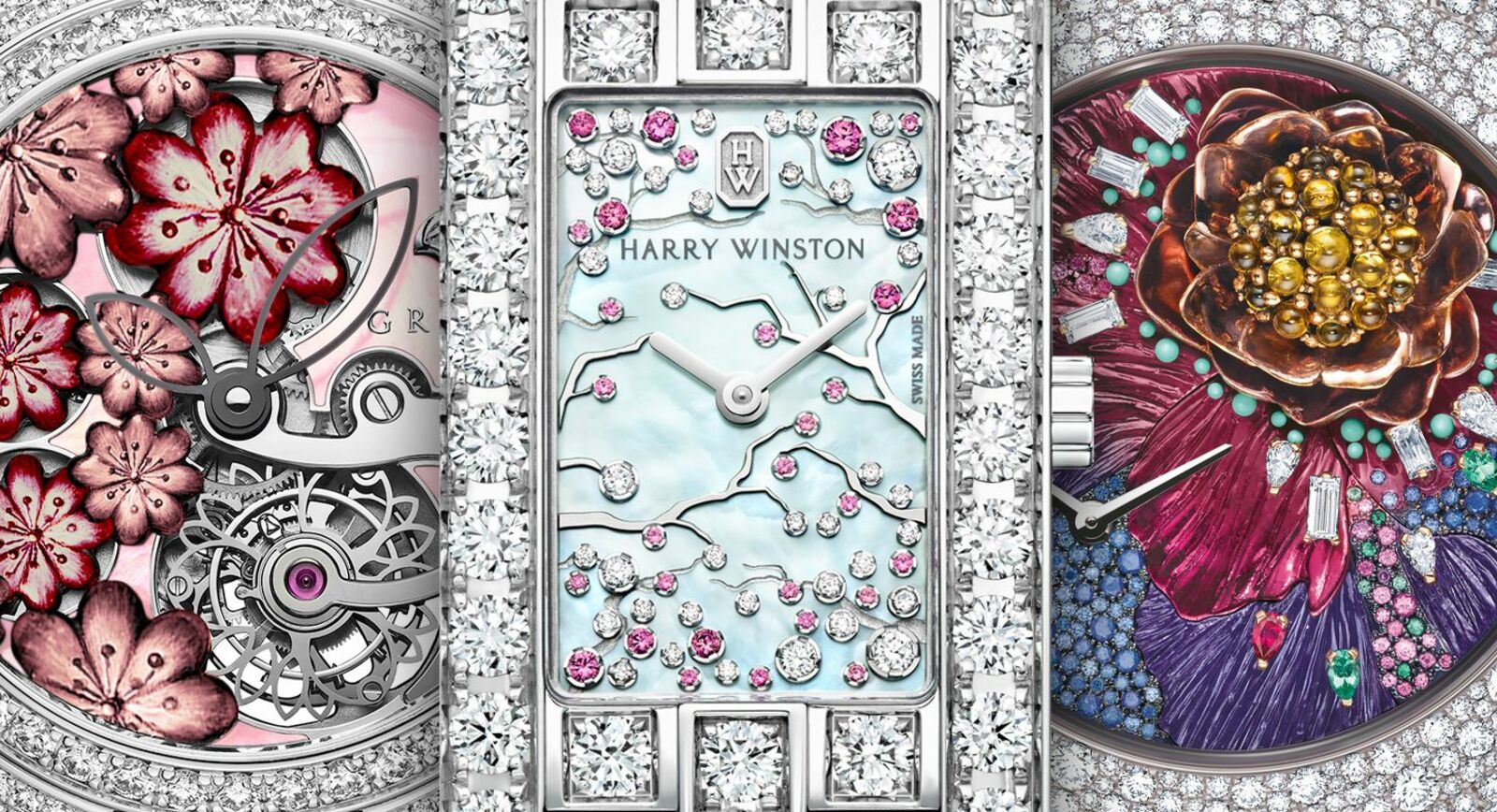 This year’s Baselworld was dominated by the theme of nature. Wherever you looked watches and jewellery were decorated with all possible types of flowers, animals, insects and inhabitants of the deep sea. They were featured on watch dials as enamel paintings, sculptural forms made from gold and decorative elements made from ornamental stones. Flora and fauna were also reflected in various collections made using gemstones. Having had a chance to see the new items of various brands, I came to the conclusion that the most beautiful watches at Baselworld were those decorated with floral motifs, and it would be unforgiveable not to write about them here.

A floral motif has been featured in the British brand’s jewellery on numerous occasions, and now has found its reflection in watchmaking. The brand new Floral Tourbillon model, the dial of which is decorated with a bouquet of flowers, has been produced in three colour variations: red, blue and violet. The dial is decorated with blossoming buds of enamel, which are hand-painted onto white gold. Creating each dial takes about fifty hours of work, as the craftsman has to correctly select the appropriate shade of enamel, something which isn’t always possible on the first attempt. The watch’s movement causes the blossoming buds to rotate, just like a dancing waltz of flowers. 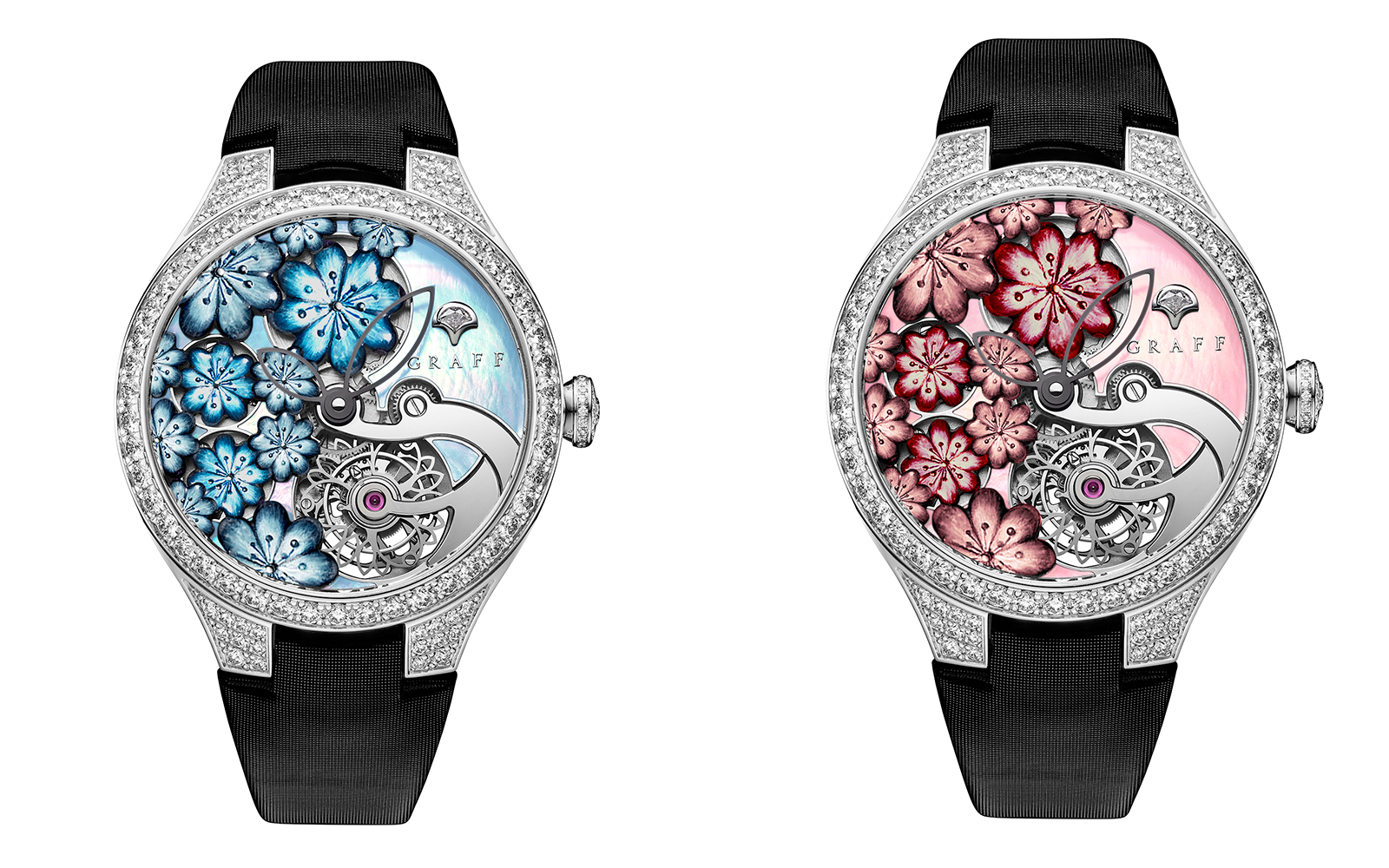 Dior never ceases to amaze with the far-reaching fantasies of its designers. For the Swiss exhibition, they created eight one-of-a-kind watches, the dials of which are decorated with fairy-tale-like flowers. All of them look three-dimensional and appear to bloom in front of people’s eyes under sapphire crystal. The dials are decorated internally with elements of polished gold, mother-of-pearl, opals, multi-coloured sapphires, emeralds and an entire palette of other gems, whilst a pavé of diamonds adorns the outer part. To stop the Dior Grand Soir Botanic looking like a strictly evening watch, its strap is made in leather covered with blue fabric. 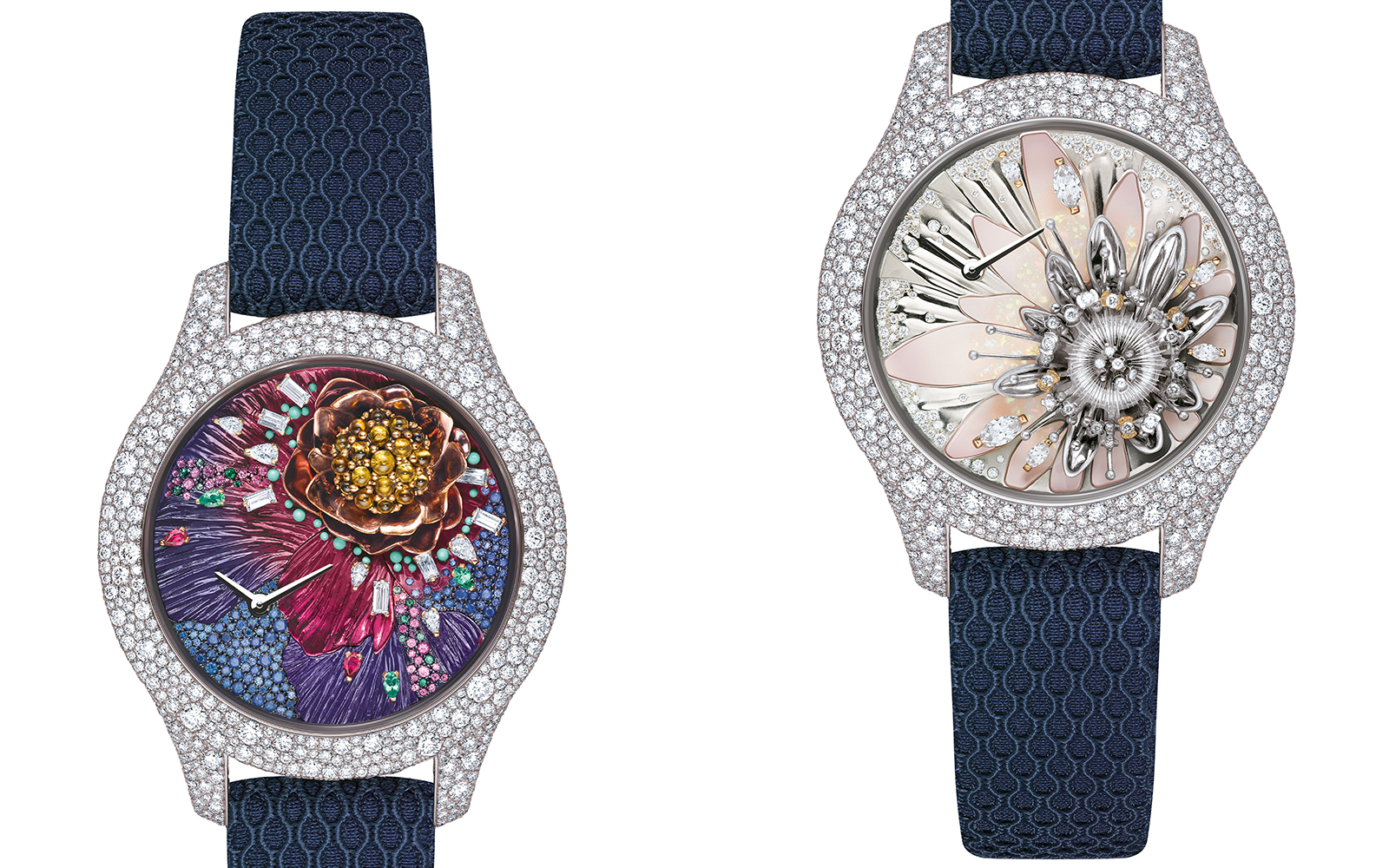 Each year for the last three years Chopard has released a limited-model ladies’ watch L.U.C. XP for true connoisseurs of the art of luxury watchmaking. For the 2017 version the Swiss brand demonstrated the heights of expertise of their gold engravers. They created miniature blooms of peonies with curved petals from 18-carat yellow gold, using them to decorate both the dial and mechanism on the back of the watch case. The round 35-millimetre dial is encircled with a pavé of colourless diamonds, miniature sparkling stones can also be found on the stamens of the peonies. The L.U.C. XP Esprit De Fleurier Peony watch was released in a limited quantity with only eight pieces available for sale. 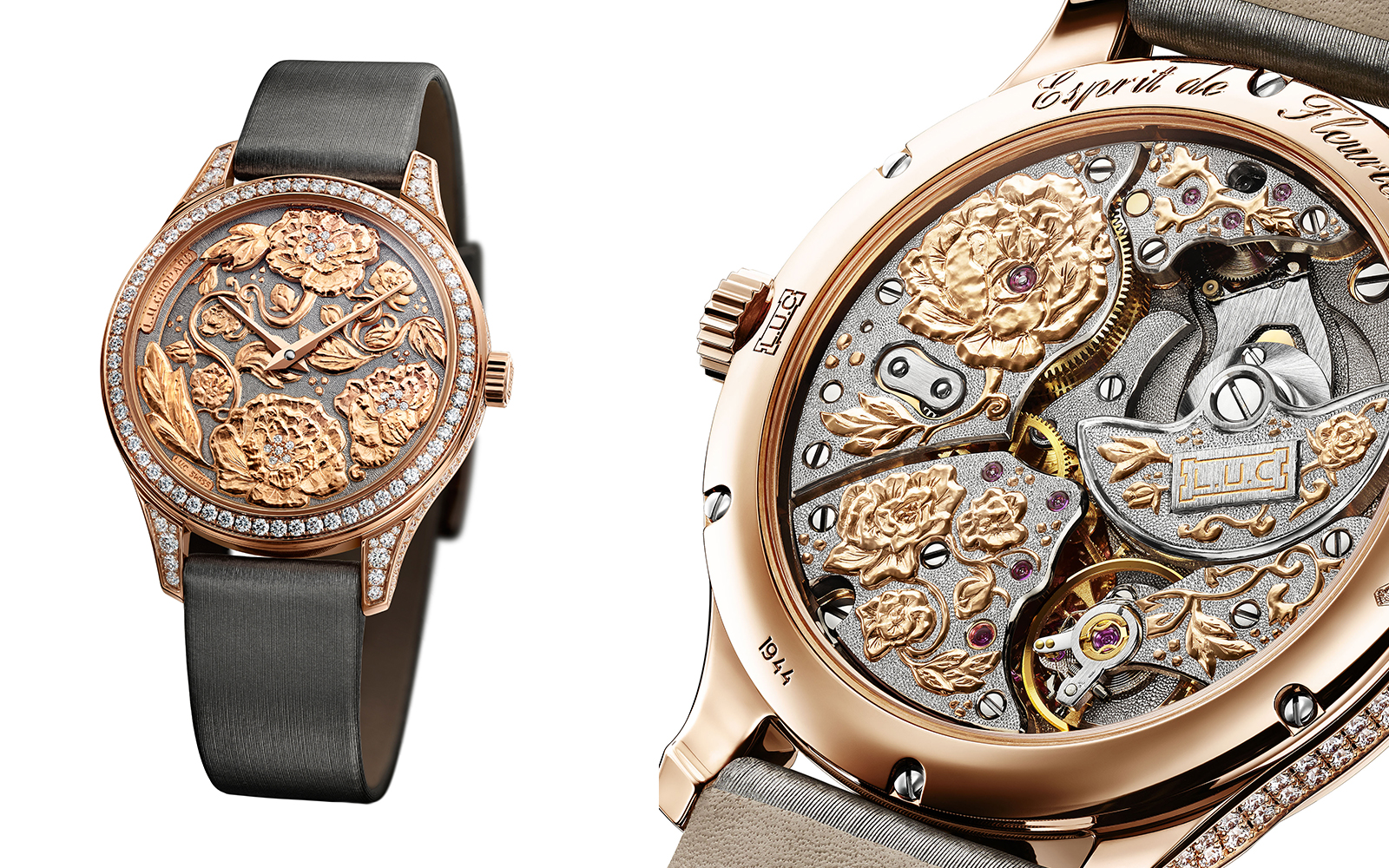 The brand Cvstos has expanded its Re-Belle Sakura line of ladies’ watches following the overwhelming success of the diamond model. Now, new shade combinations have appeared in the collection with blue, pink and yellow sapphires, as well as green tsavorites, bordering the dial. The watch’s case is made from pink gold or steel and the dial is decorated with a cherry tree blossoms, which have been skilfully painted in enamel. In regards to Re-Belle Sakura, two new models were brought out especially for Baselworld. These were the Re-Belle Papillon with a butterfly and the R-Belle Rose with a rose. 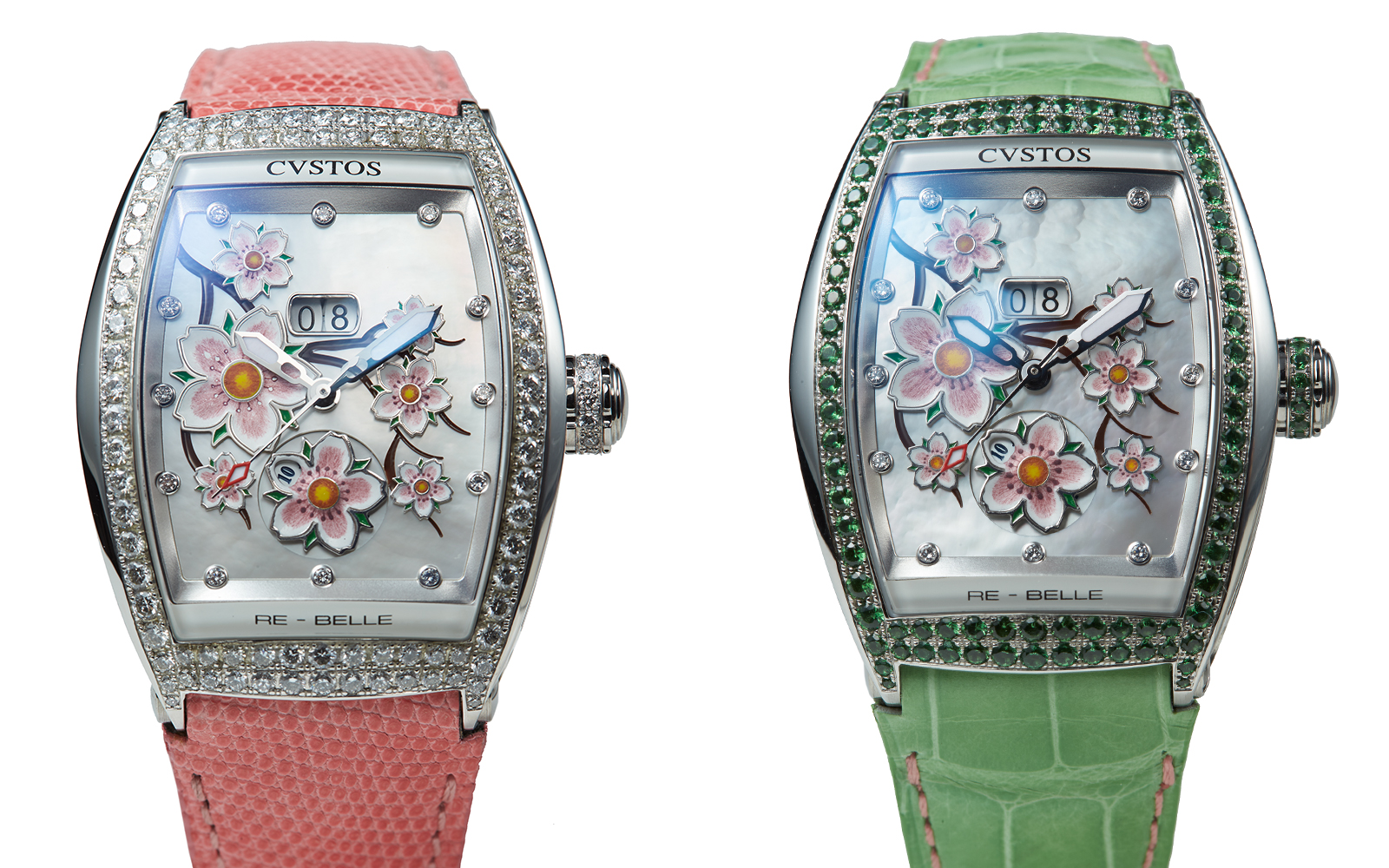 The beautiful blooms of Japanese cherry plums inspired the designers of Harry Winston to create their new cocktail watch, Avenue Classic Cherry Blossom. Its rectangular dial is decorated with light blue mother of pearl, upon the surface of which sprout branches of white gold, as well as 39 diamonds and 29 pinks sapphires that imitate the flowers of the cherry tree. When creating the landscape, the designers used stones of different sizes and placed some of them on the branches, and others around them, to create the illusion of both blossoming and falling flowers. 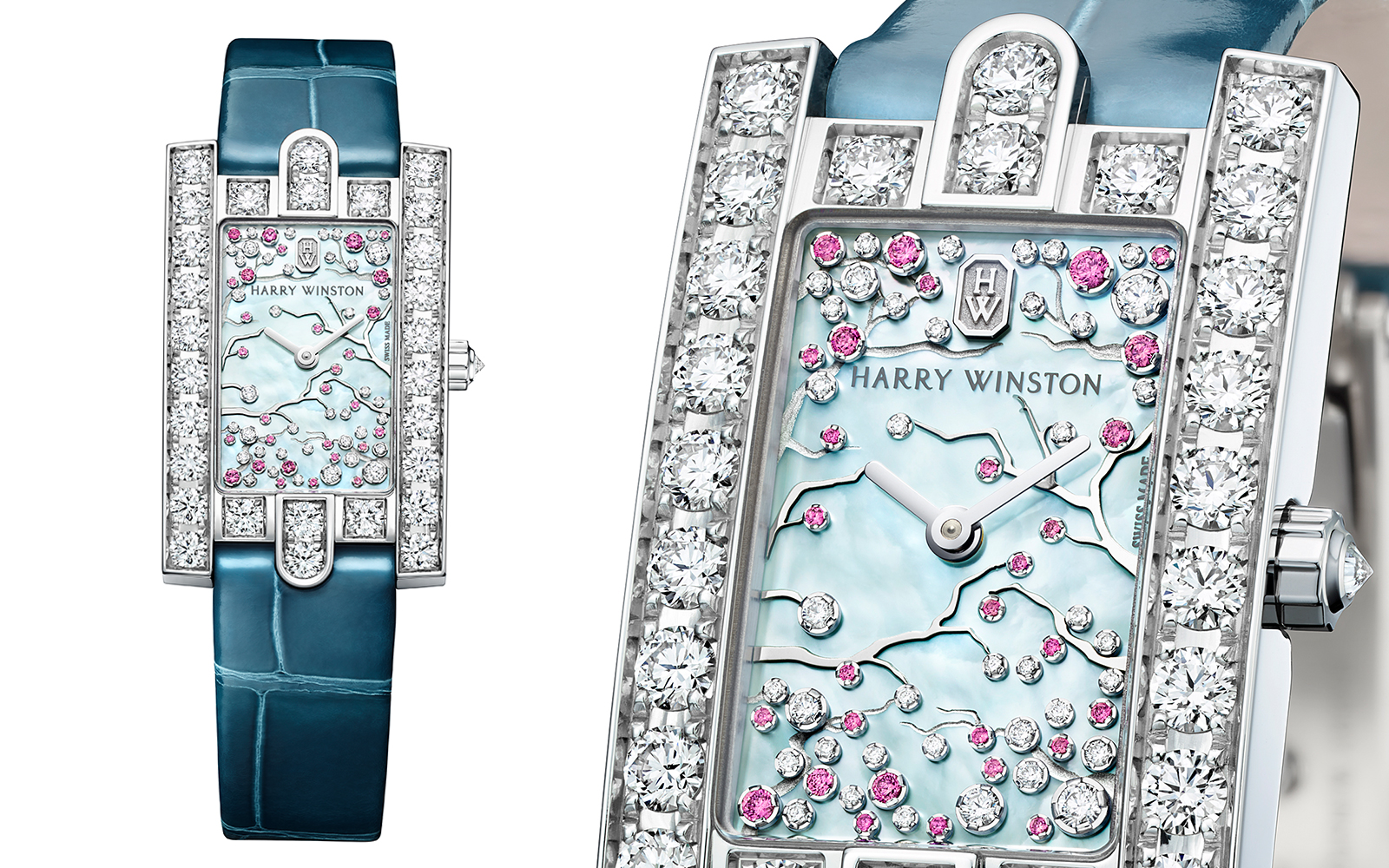 This year Chanel celebrates the thirtieth anniversary of the Première watch, which they have honoured by releasing the Première Camélia Skeleton model. Three different versions were released: the first, the most “modest”, with a minimal amount of diamonds, the second – with a baguette around the dial and round diamonds across the entire surface of the Camellia, and the last model – a sparkling firework of a watch, fully encrusted with colourless precious stones. The Première Camélia Skeleton watch is equipped with the Calibre 2 mechanism, which takes the form of the iconic Chanel flower. It is the second mechanism to be developed in-house by the French Maison. 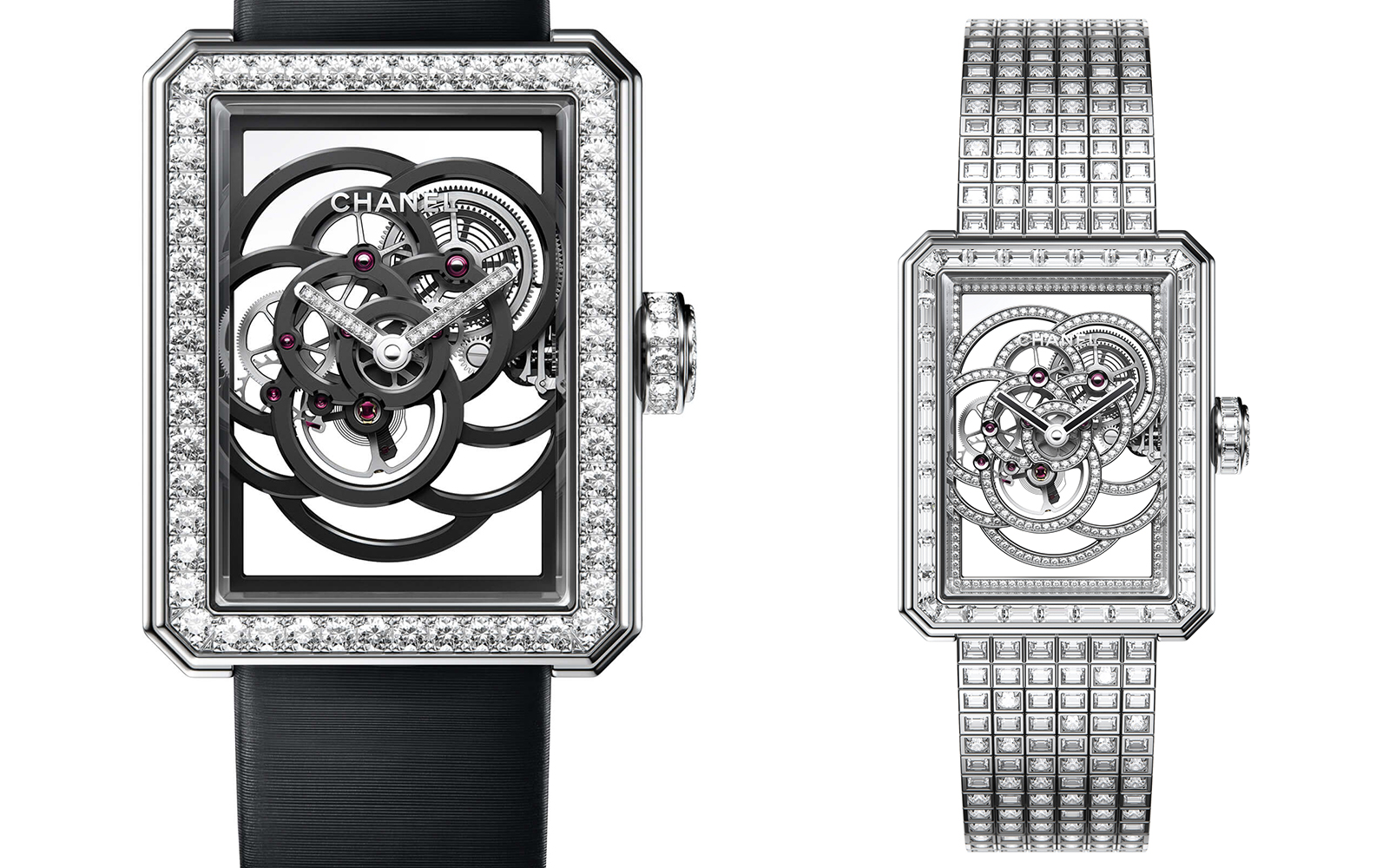