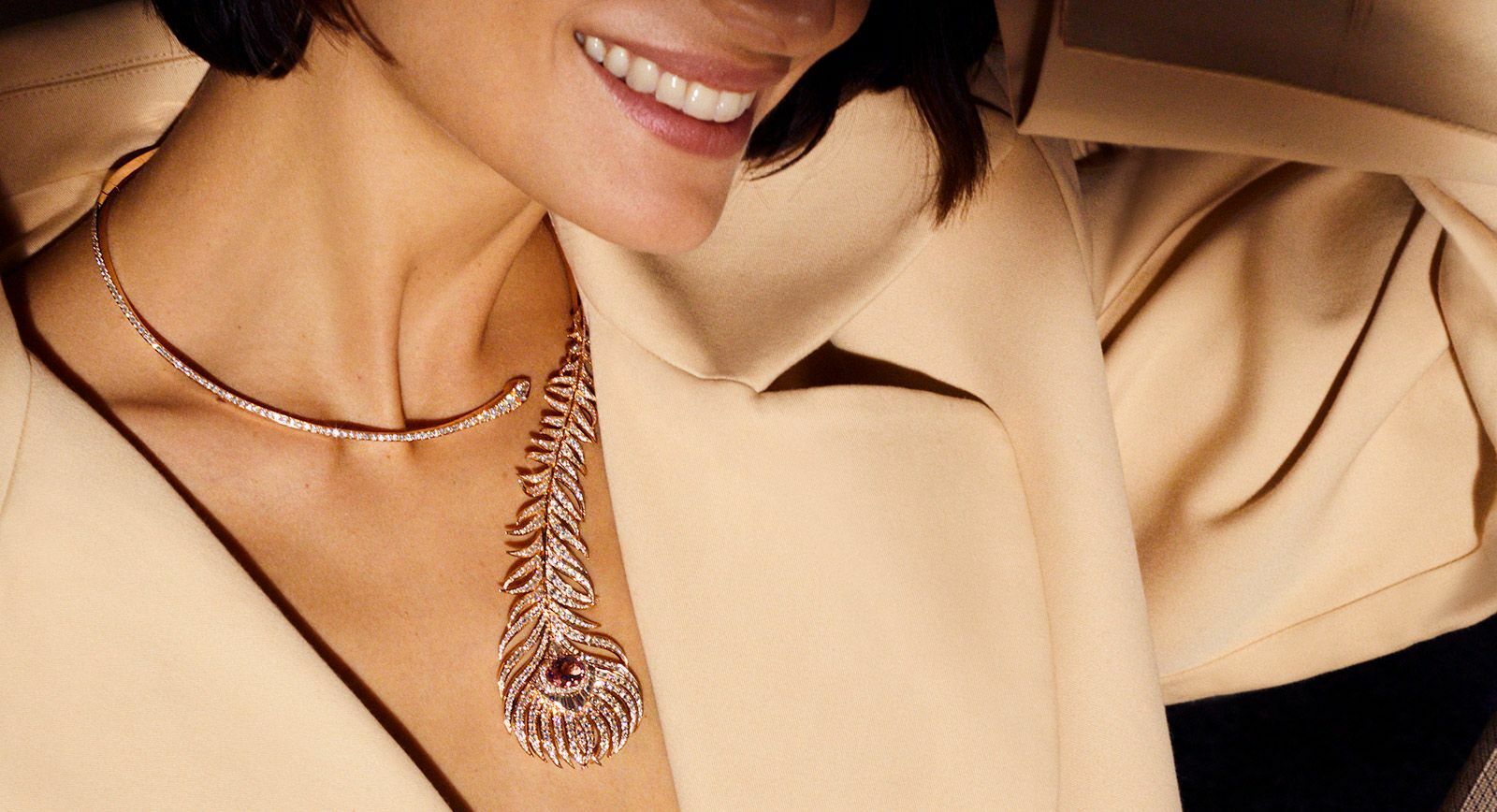 As jewellery houses on the Place Vendôme present their latest collections, Paris Haute Couture Week becomes a time for discovering jewelled treasures. Some brands offer collections based around entirely novel themes, while others chose to reinvent their most iconic works. This is exactly what creative director Claire Choisne has done in her new Boucheron ‘Haute Joaillerie Signature’ line.

The French jewellery house which was founded by Frédéric Boucheron famously presented a necklace in the form of a question mark all the way back in 1879. It was not easy for women to put on their luscious necklaces themselves, so the ever innovative Frédéric decided to design a solution to this technical hindrance, by offering a piece of neck jewellery without a clasp on the back. One could easily put it on or remove it without the assistance of another person. 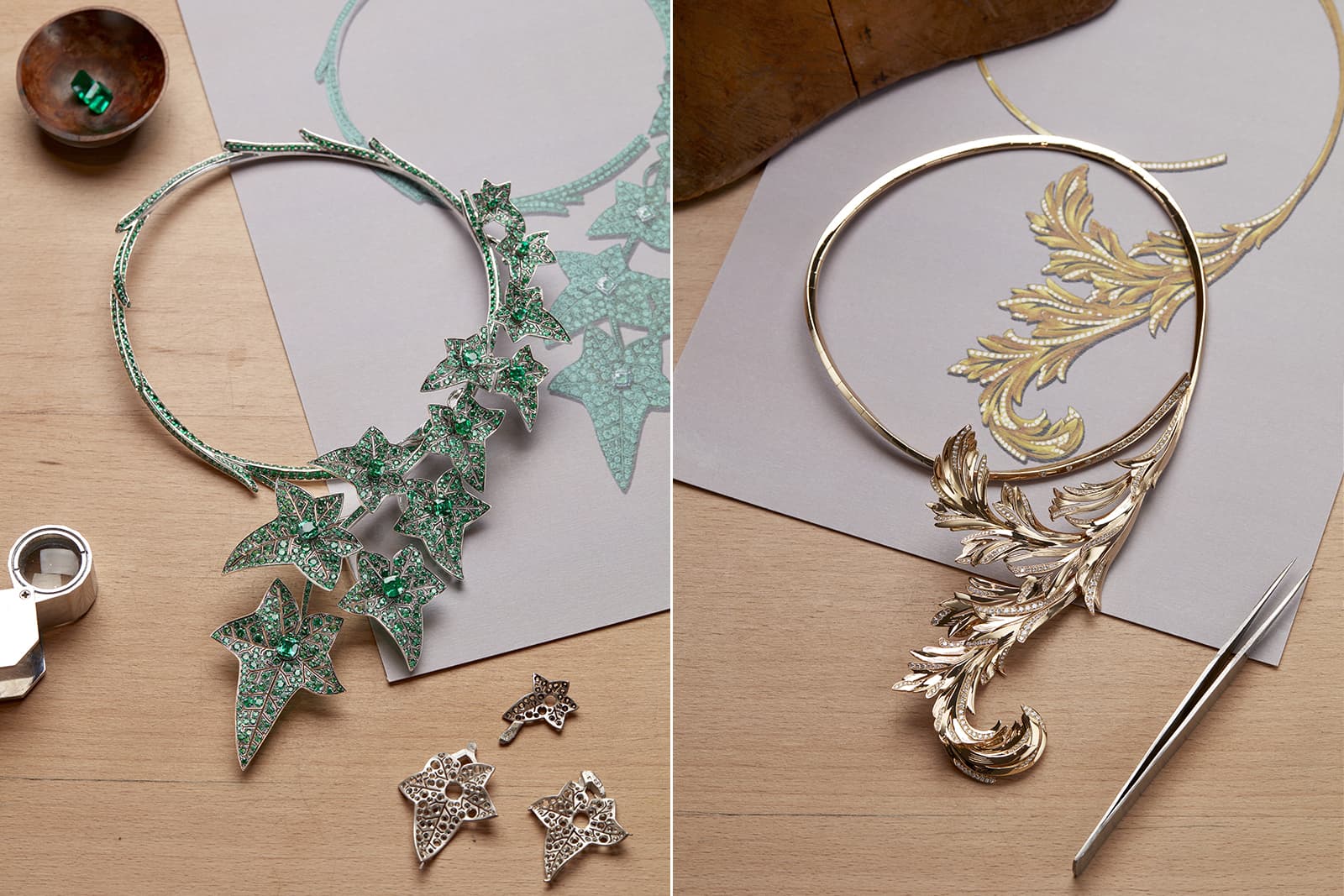 The original shape of the necklace embodied simplicity and prosperity: clean lines around the neck, descending elegantly into the neckline. The main adornment changed over time – variously depicting lotus flowers, a bunch of grapes, poppy petals, a peacock, and even a snake. Since then, this question mark form has returned periodically to the collections of the Boucheron House. In 2020 the design was once more been revived under the watchful eye of Boucheron’s creative director, Claire Choisne, who has presented us with eight magnificent variations on the design.

“The apparent simplicity of the choker combined with the shifted centre of focus were the exact opposite of the fashion for naturalistic jewellery pervasive at the time,” says Claire Choisne. “This novel stylistic approach, based on asymmetry, abundance and the aesthetics of curved lines, was augmented by a truly innovative technical feat: the necklace’s lack of clasp.” 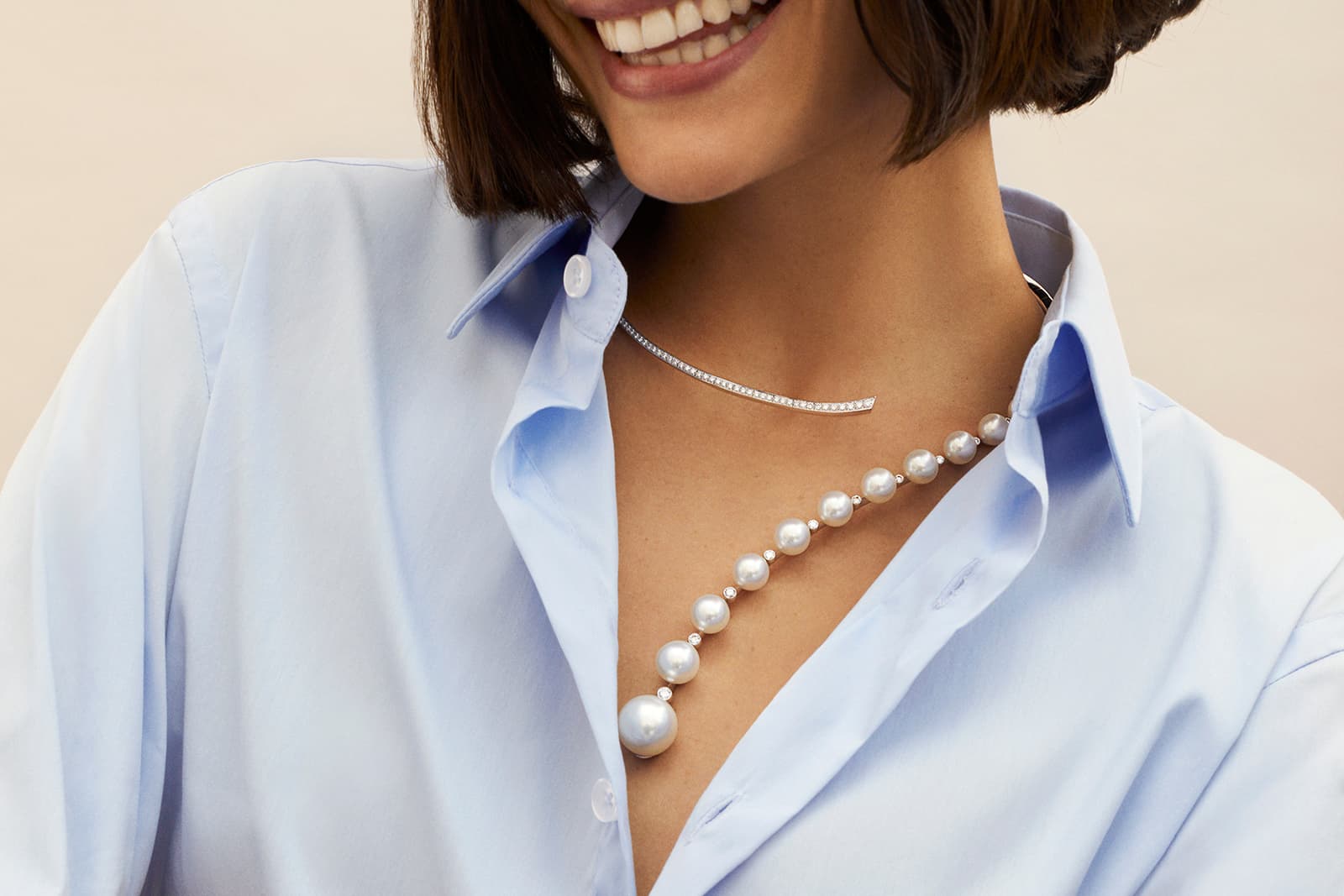 Claire Choisne admits that she has always been inspired by the interrogative shape of the necklace. It was this lifelong fascination that lead her to take the bold step of creating a whole collection that combined necklaces of a similar structure, as well as earrings that echo the iconic design. Almost all of the variations are an interpretation of motifs that have previously been featured in Boucheron collections: feathers, ferns, wheat, spikelet. Among them, I found my eye drawn to a necklace with 11 South Sea pearls with a total weight of 98 carats and 197 diamonds – brilliant for its conciseness. 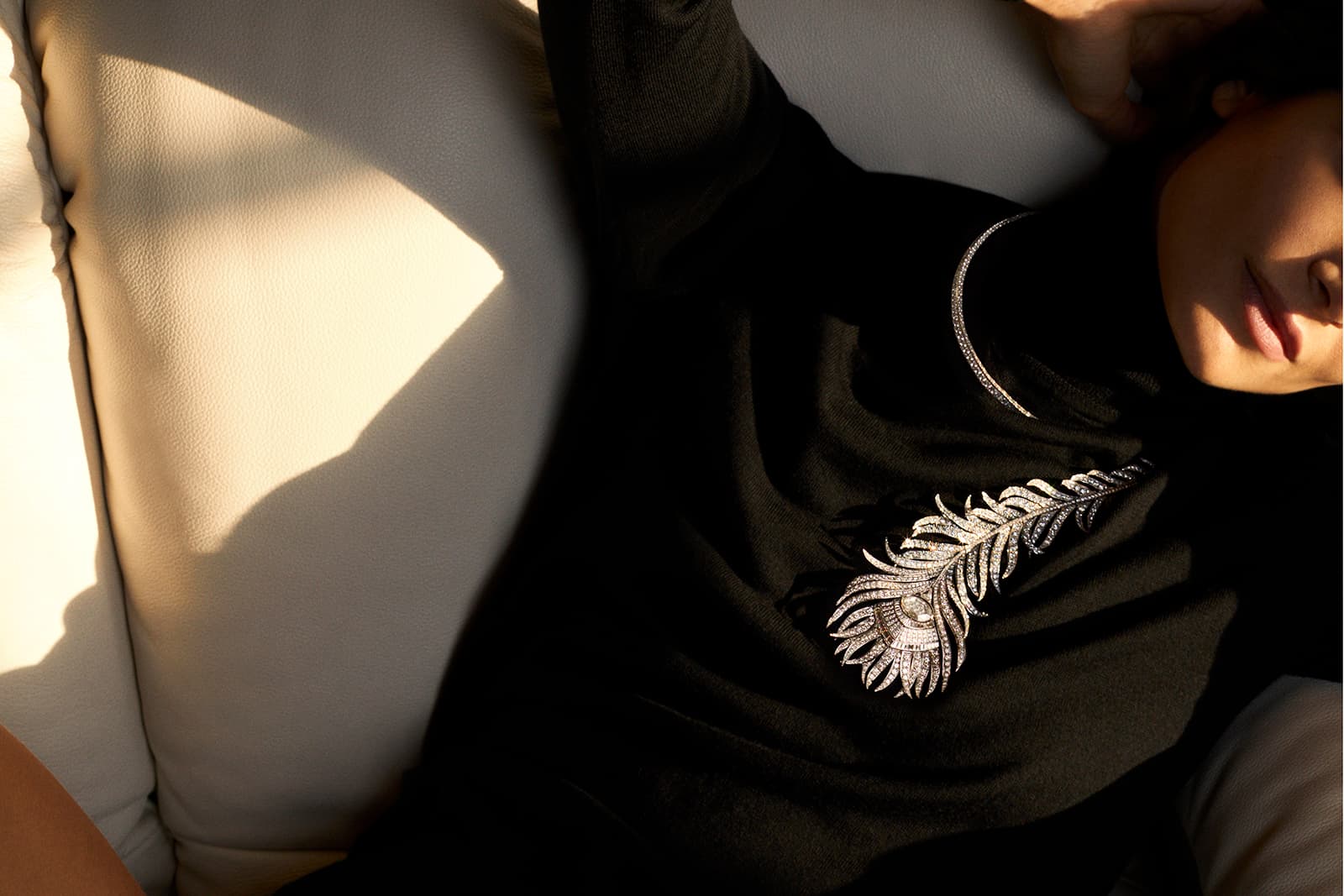 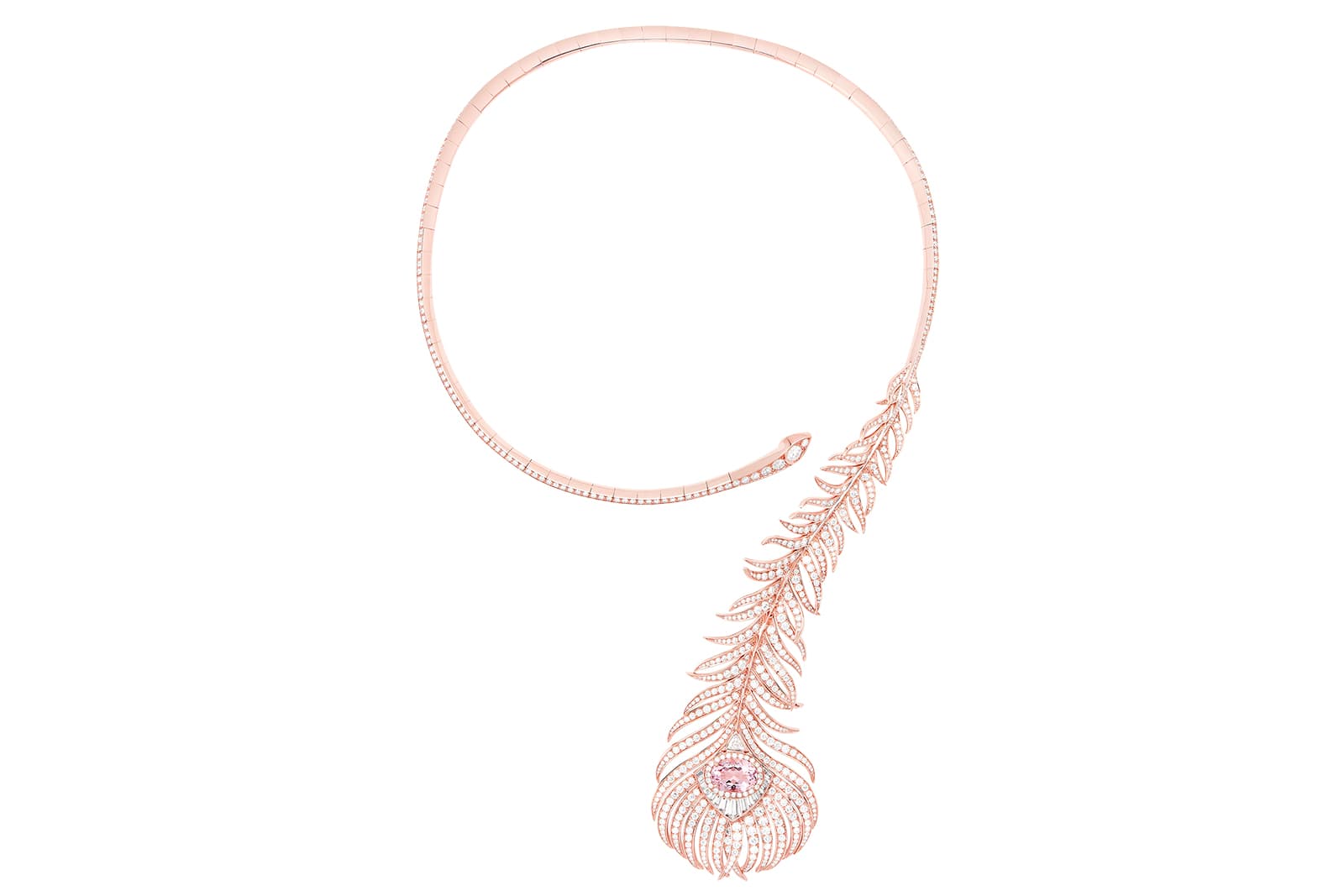 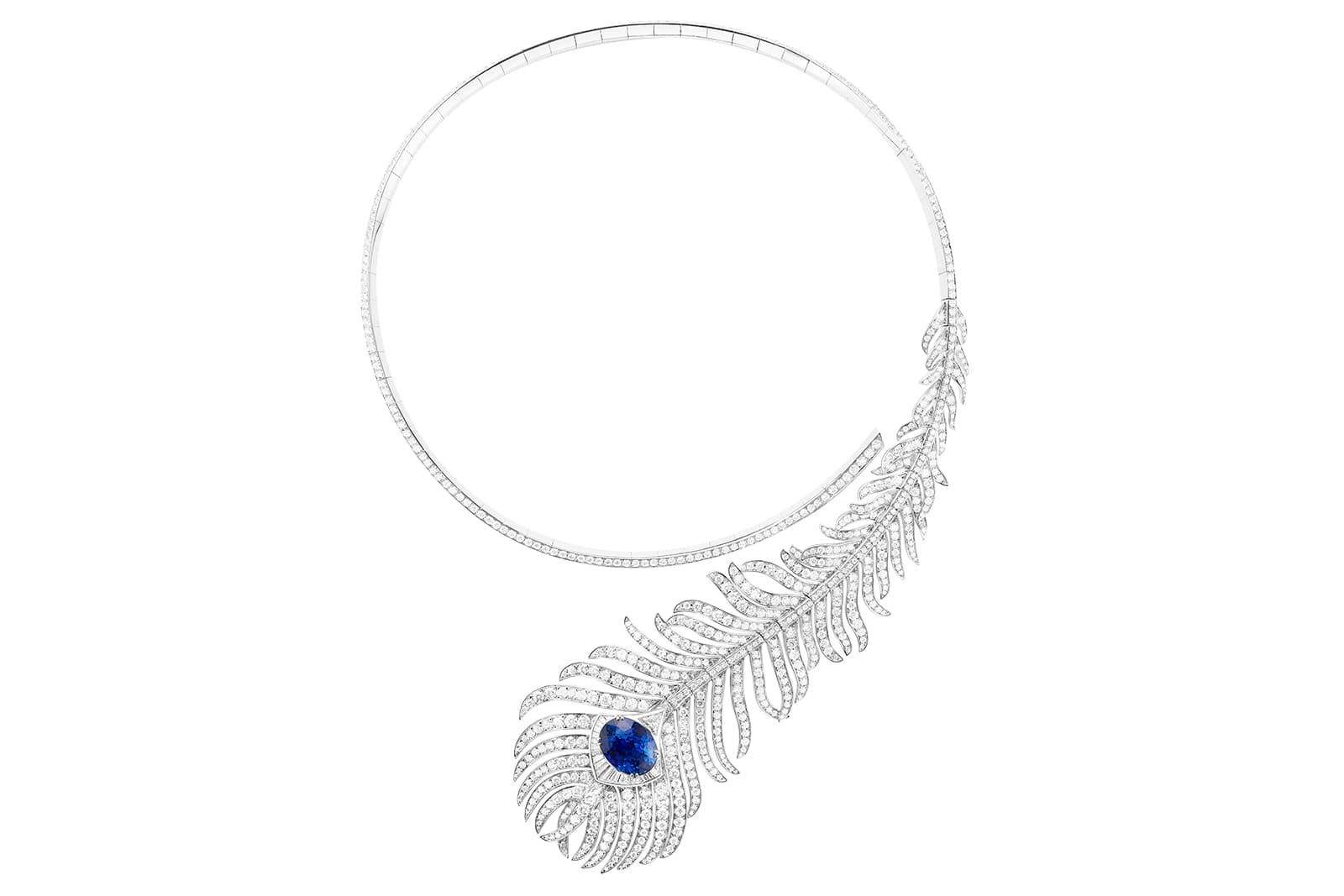 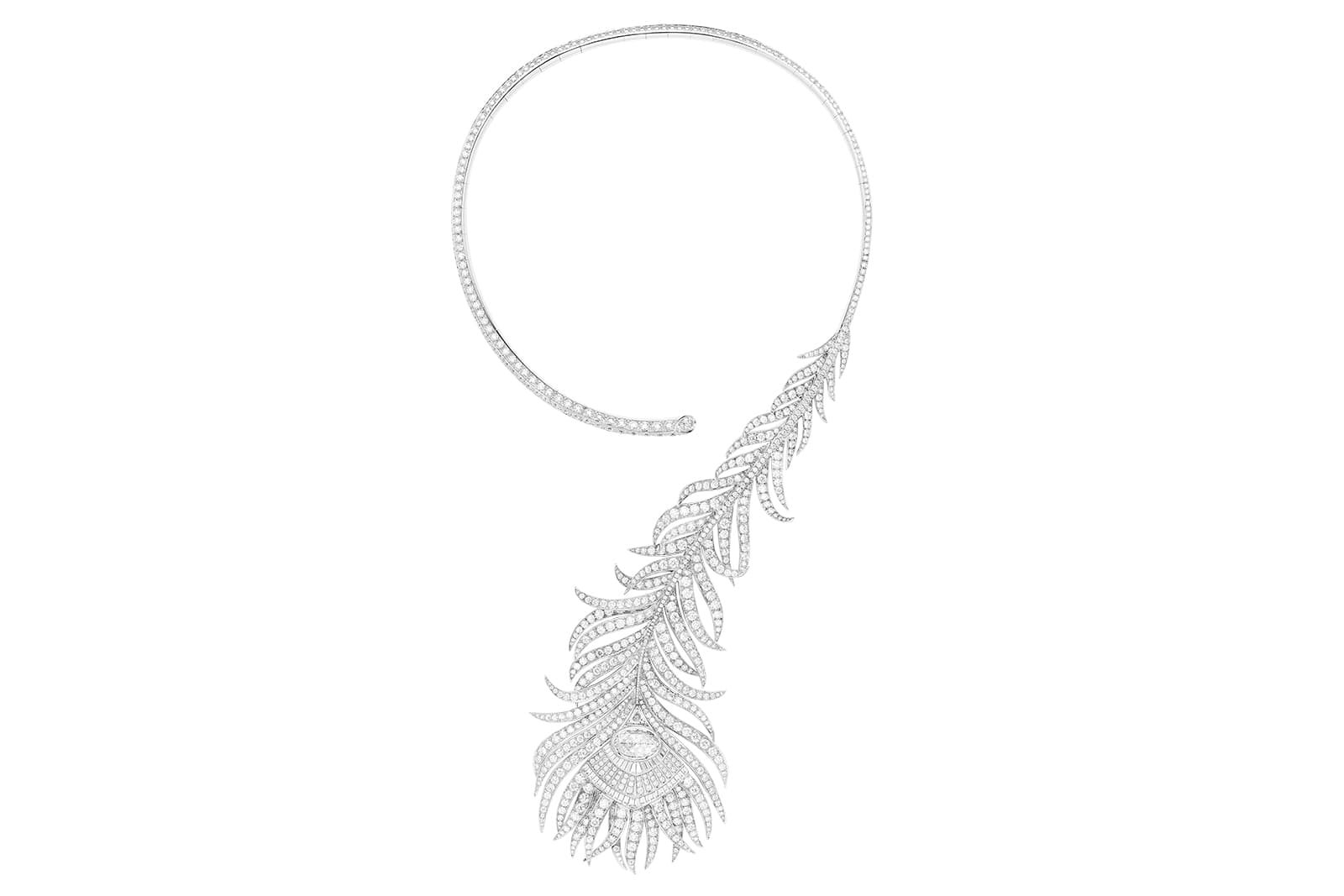 A carefully crafted natural motif, realistic shapes and flexibility resonate harmoniously in a feather-shaped Plume de Paon necklace. Claire Choisne has designed a large necklace and made use of 19th century metal working techniques in order to create something beautiful. The design is presented in several different colours: one necklace is comprised of rose gold with a softly shining tourmaline, another - the most expensive of the collection - is offered in white gold with an intoxicatingly velvety Burmese sapphire of 10.98 carats. 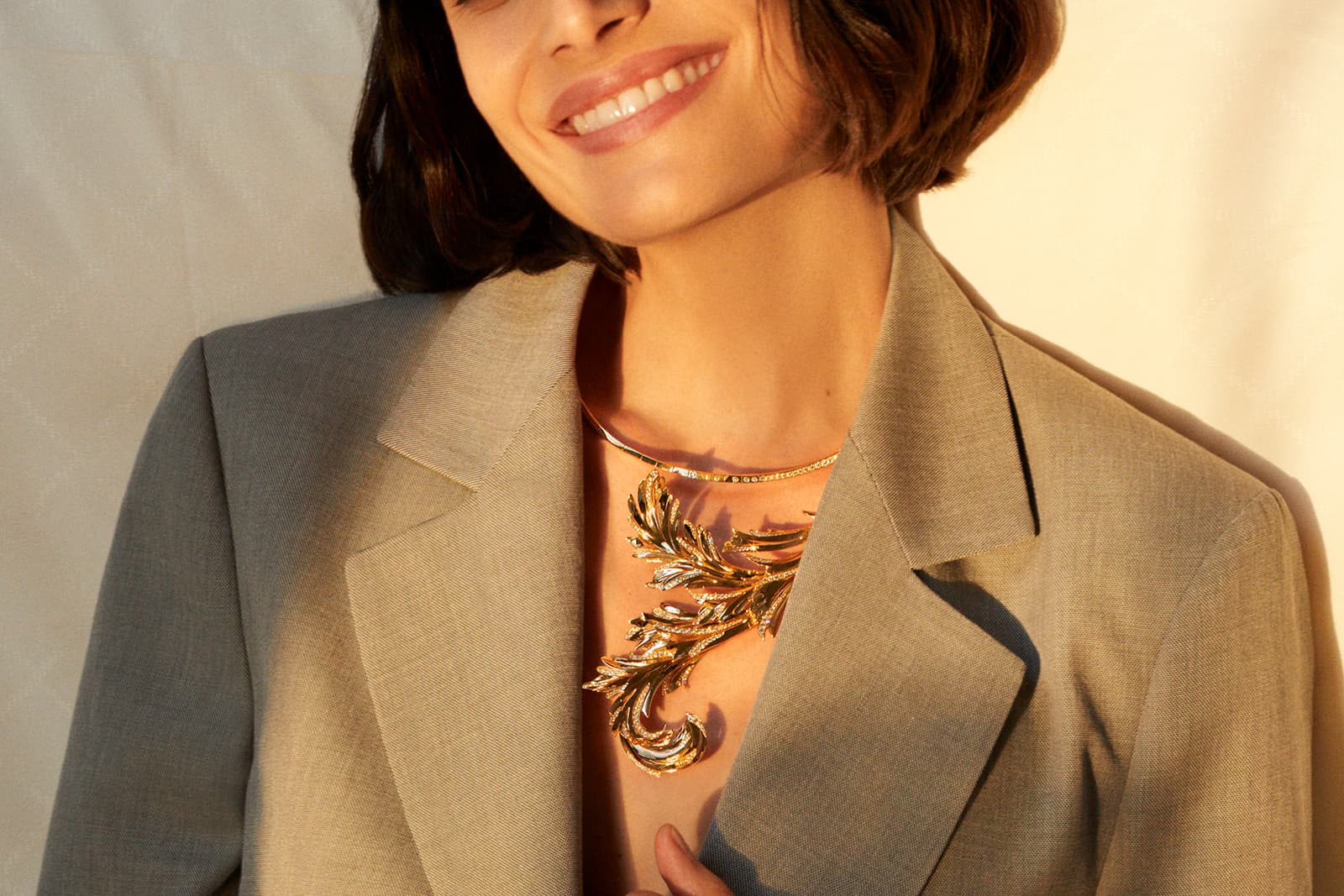 The Lierre de Paris necklace - adorned with en tremblant emerald leaves - is perhaps the greatest demonstration of the House’s technical skills. This foliage motif, made only of white gold with colourless diamonds, draws to mind the previous Nature Triomphante collection. The newer green version was also designed using sophisticated techniques that allow for the impression of volume as well as the movement of the leaves. All of this is of course in line with Boucheron’s historical ethos of innovation, as well as Claire Choisne’s personal fascination with realism. 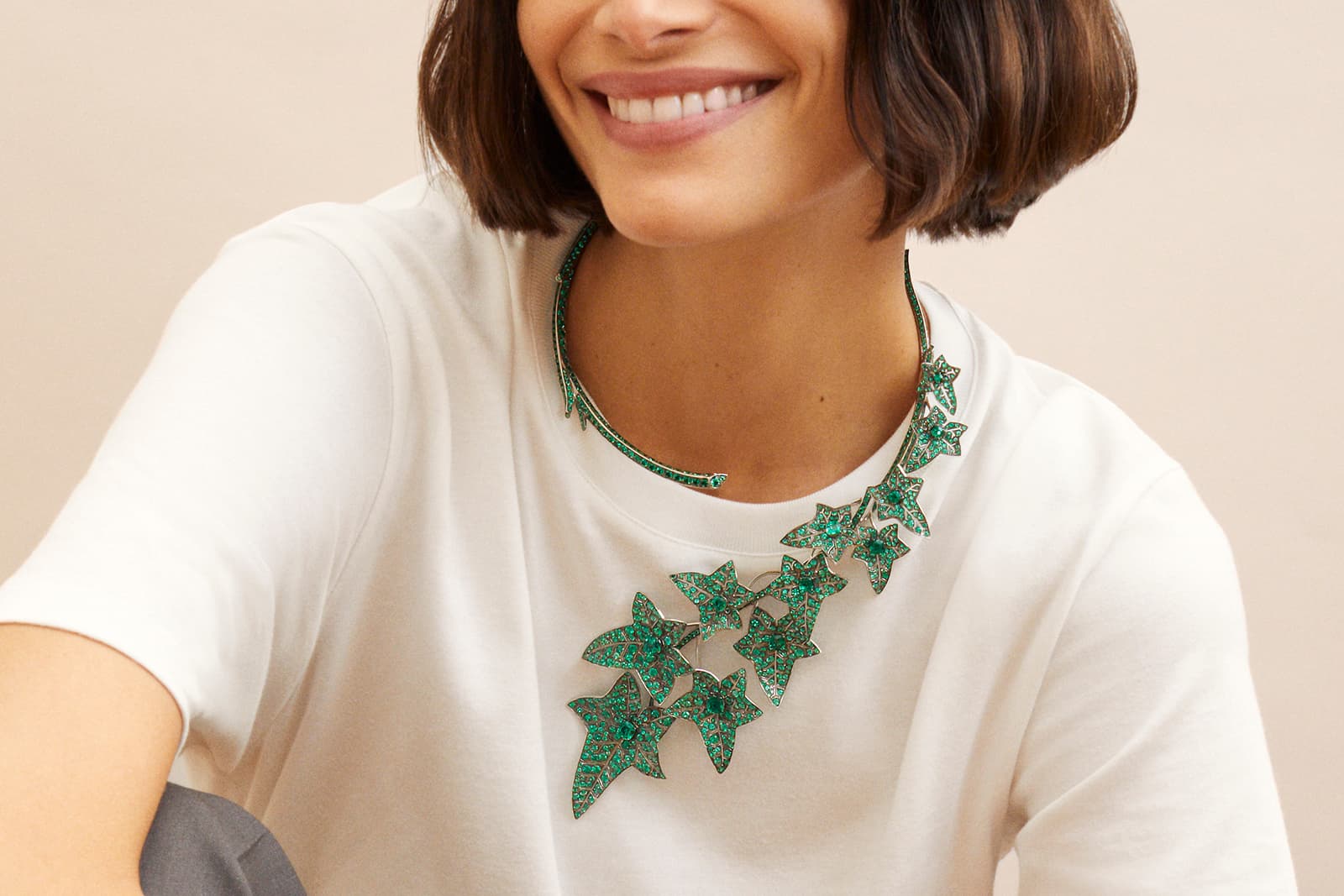 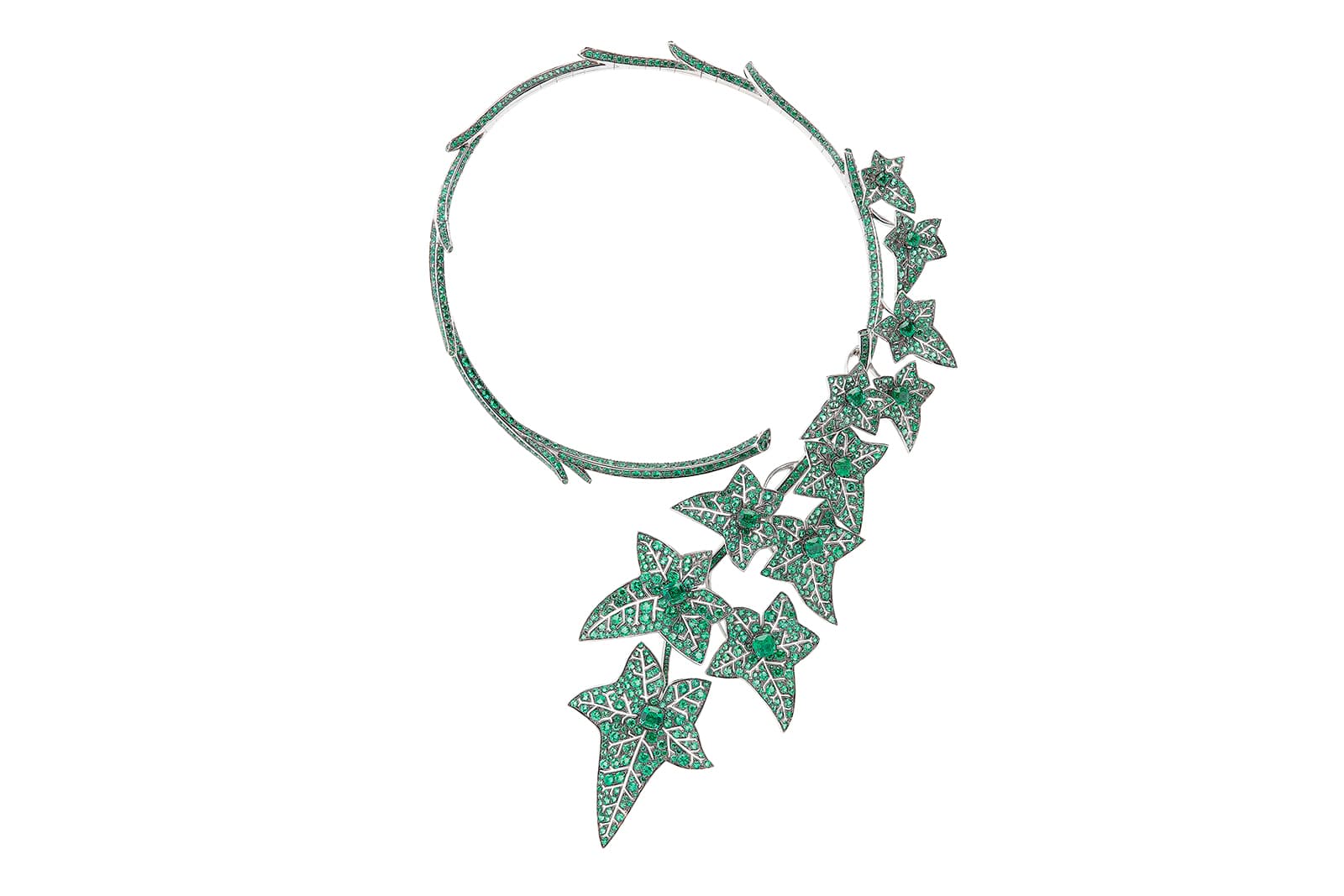 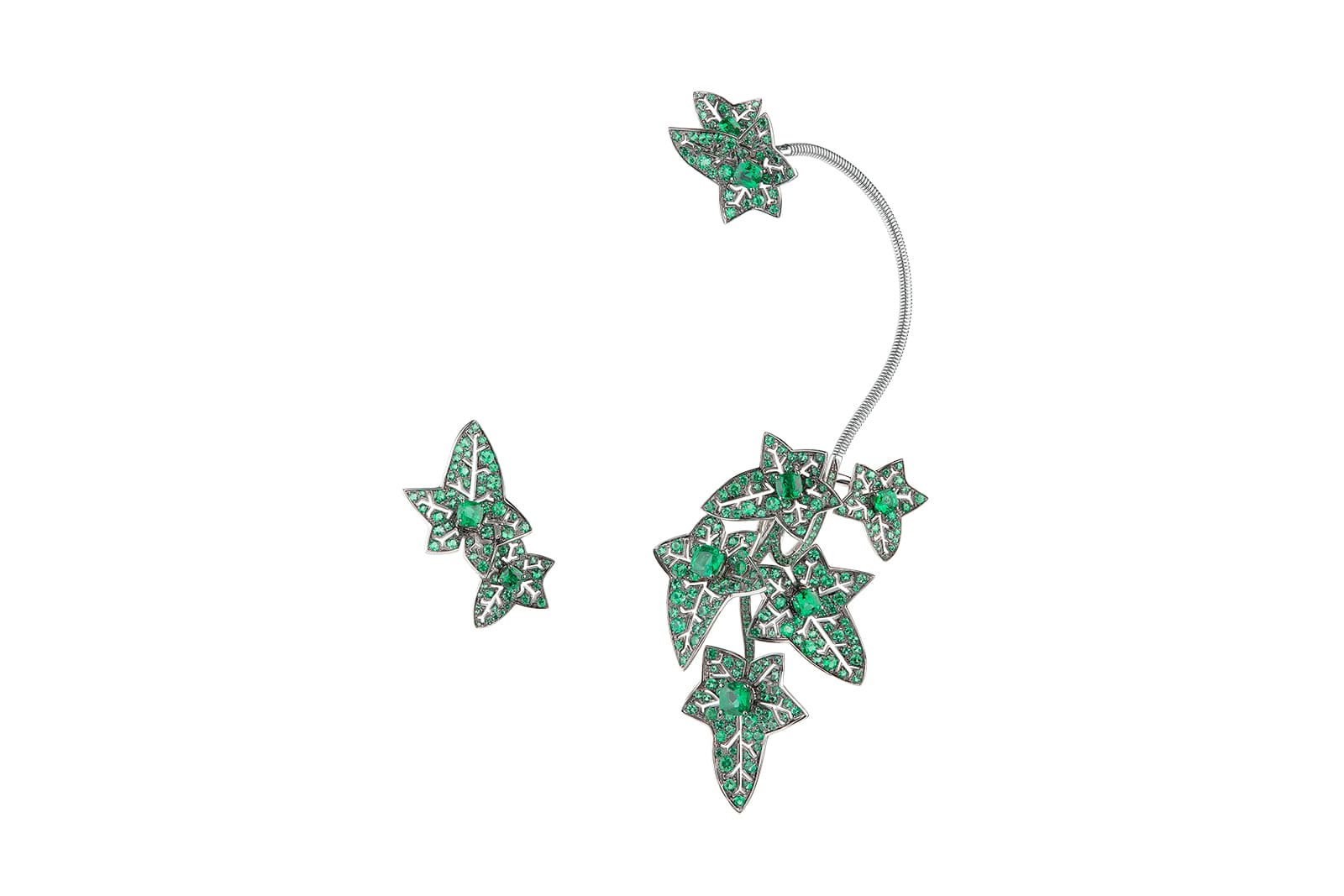 Incredible similarities with plants that exist in the natural world can be found throughout the collection. The sensual hydrangea was another source of inspiration for Choisne, and the flower is the central decoration on the stunning Nuage de Fleurs necklace. “This is the first flower my daughter gave me. I find myself drawn to its simplicity,” the Creative Director told me. When creating the necklace, each hydrangea petal was individually scanned as to ensure that the ephemerality of nature could be reproduced in mother of pearl. 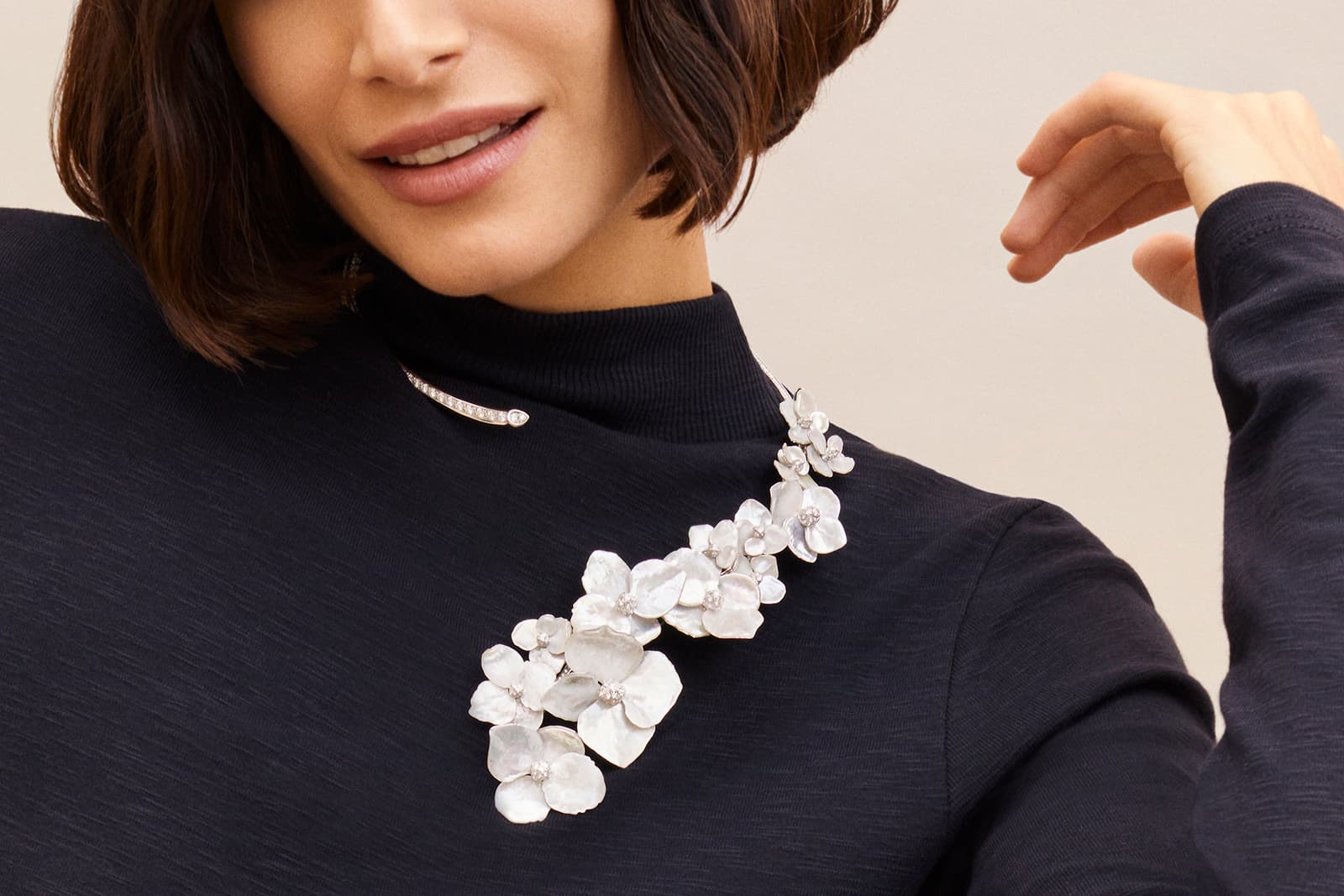 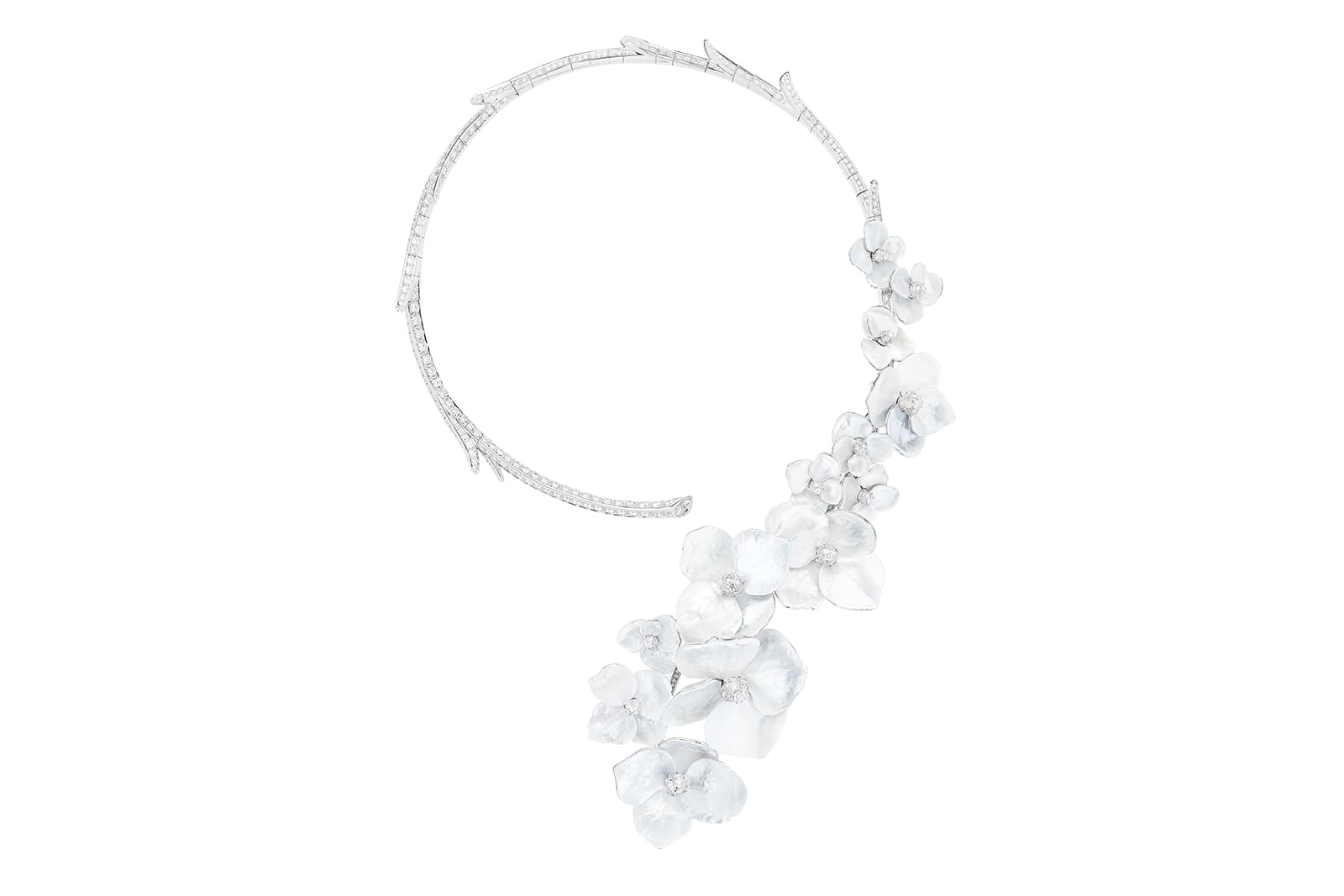 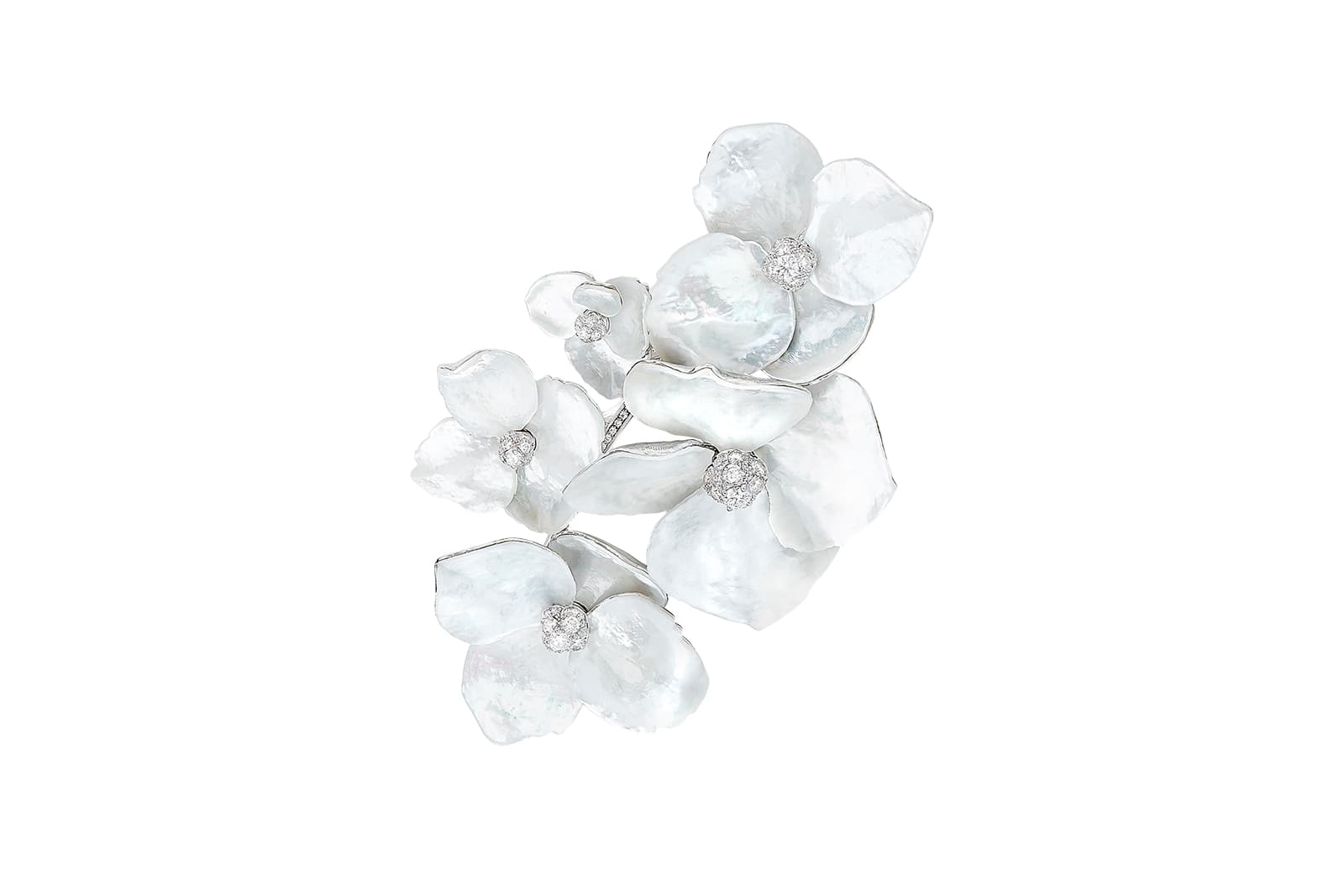 Until now, I have never met a craftsman who would carve voluminous designs from mother of pearl. Usually, the shell is cut in fragments with a flat or rounded surface, and the presentation of Boucheron’s designs are the only time I’ve come across such naturalistic decorative elements depicting the curvature of petals. It is very difficult to work with mother of pearl due to its fragility - in this case, it's no wonder that it took 520 hours to create the Nuage de Fleurs question mark form necklace. 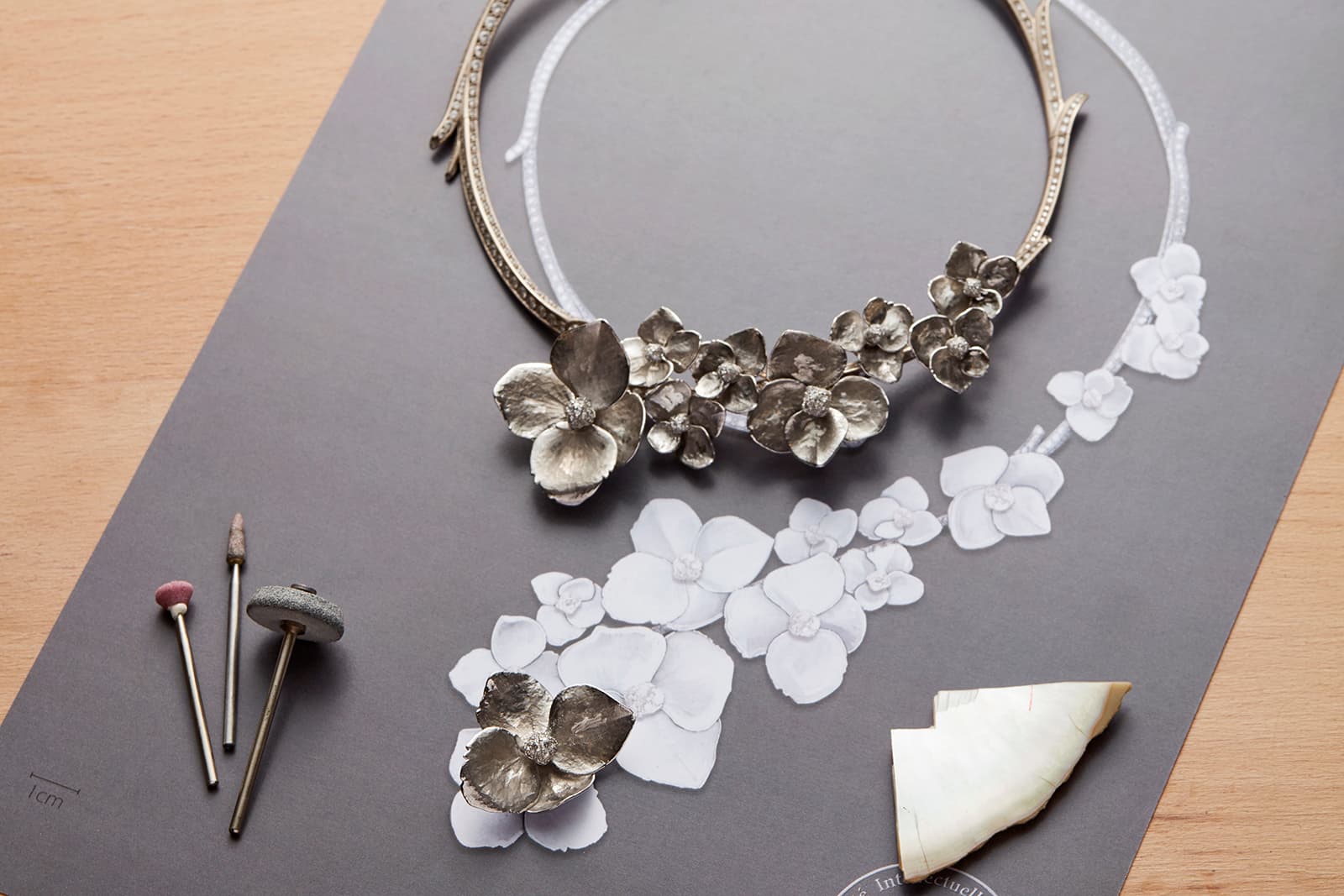 Two of the necklaces are accompanied by equally original earrings: Lierre de Paris – a set of asymmetric 'leaves' – and the Feuilles d'Acanthe – a ‘mono-earring’ (a neologism that, much like the question mark necklace, encapsulates the House’s spirit of innovative freedom). The new jewellery collection is due to go on sale in February or March of 2020.