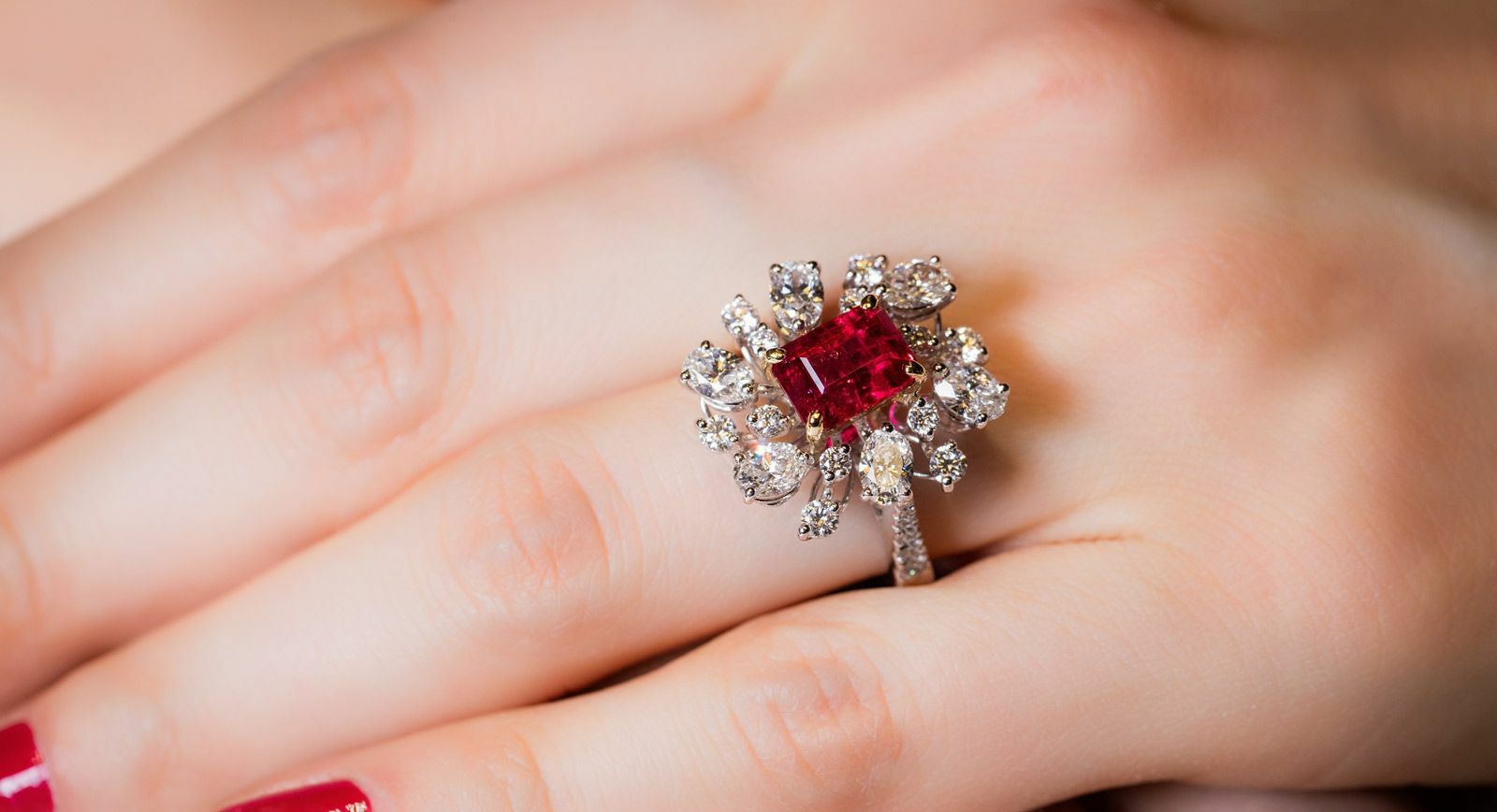 Nature has produced so many precious stones that not even comprehensive gemmology books include detailed descriptions about them all. Collectors have, for some time now, been hunting down one such precious stone: the red beryl. This is an incredibly rare stone – you simply won’t find it in the high jewellery collections of the world’s renowned maisons; indeed, it doesn’t appear at auction more than once every few years. So why have I decided to talk about red beryl now? Because I have finally seen it in the flesh as part of Caratell’s high jewellery collection.

This red stone is a “brother” of emerald, aquamarine and other stones in the beryl family, distinguished by its crimson colour and value – it is the most expensive one. Sometimes its colour can be more reminiscent of ripe raspberries, although it is considered to be most attractive when the colour is a saturated red colour with a hint of dark blue. 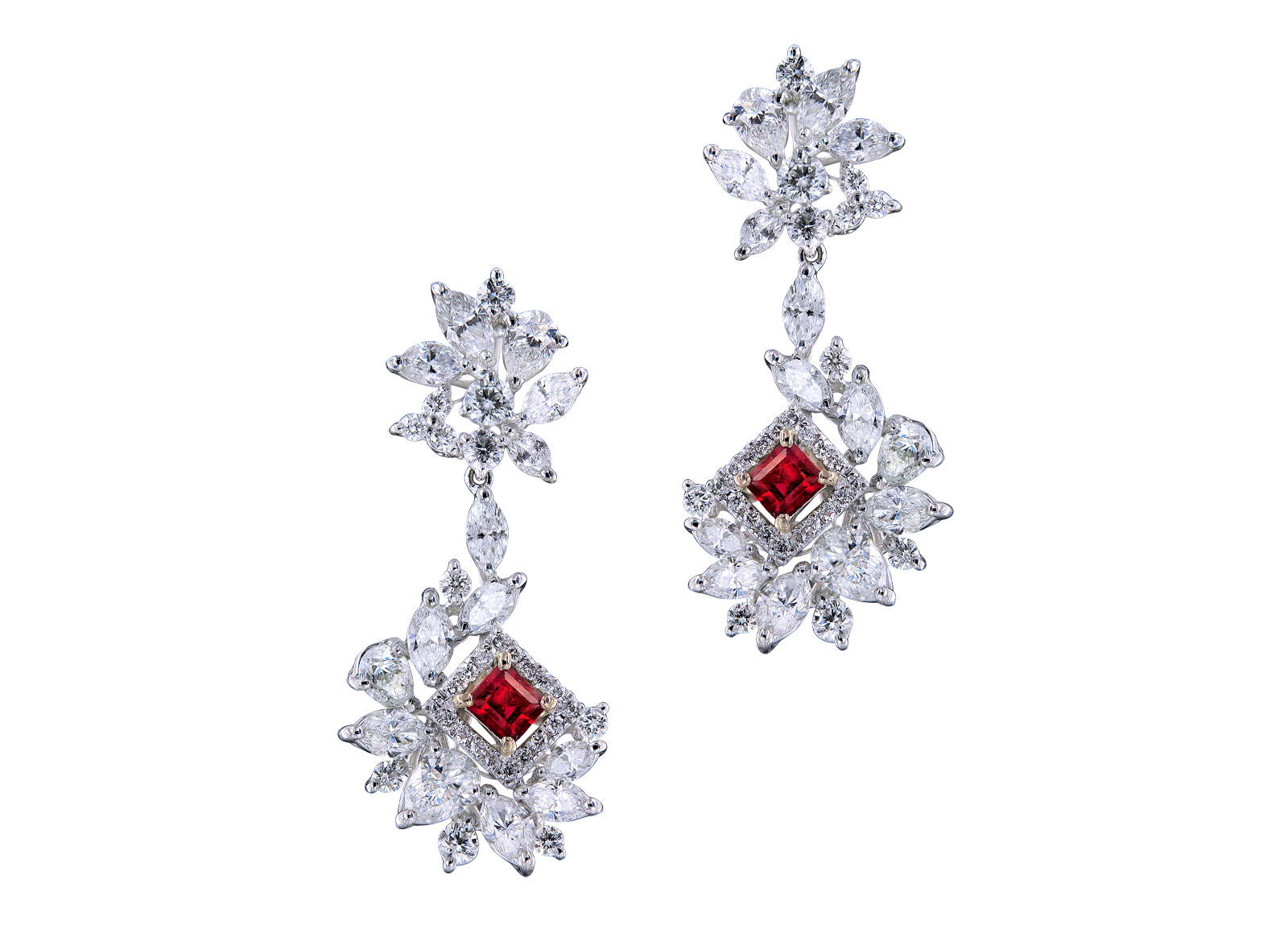 Red beryl’s other name, bixbite, was given to it in honour of its founder, a talented self-taught geologist Maynard Bixby. The American was the first to find the pinkish red stones and in the first edition of the Mineral Collector magazine in 1896 announced that he was ready to sell his discoveries.

Until 1912, the unusual gemstone didn’t have a scientific description until the German scientist Alfred Eppler decided to immortalise the name of the innovative American geology enthusiast, naming the pink red stone “bixbite” in his honour. Eppler didn’t take a moment to consider the fact that the mineral bixbyite already existed in nature as a combination of iron oxide and manganese. This caused confusion and so in gemmology the name “red beryl” has been used much more often. 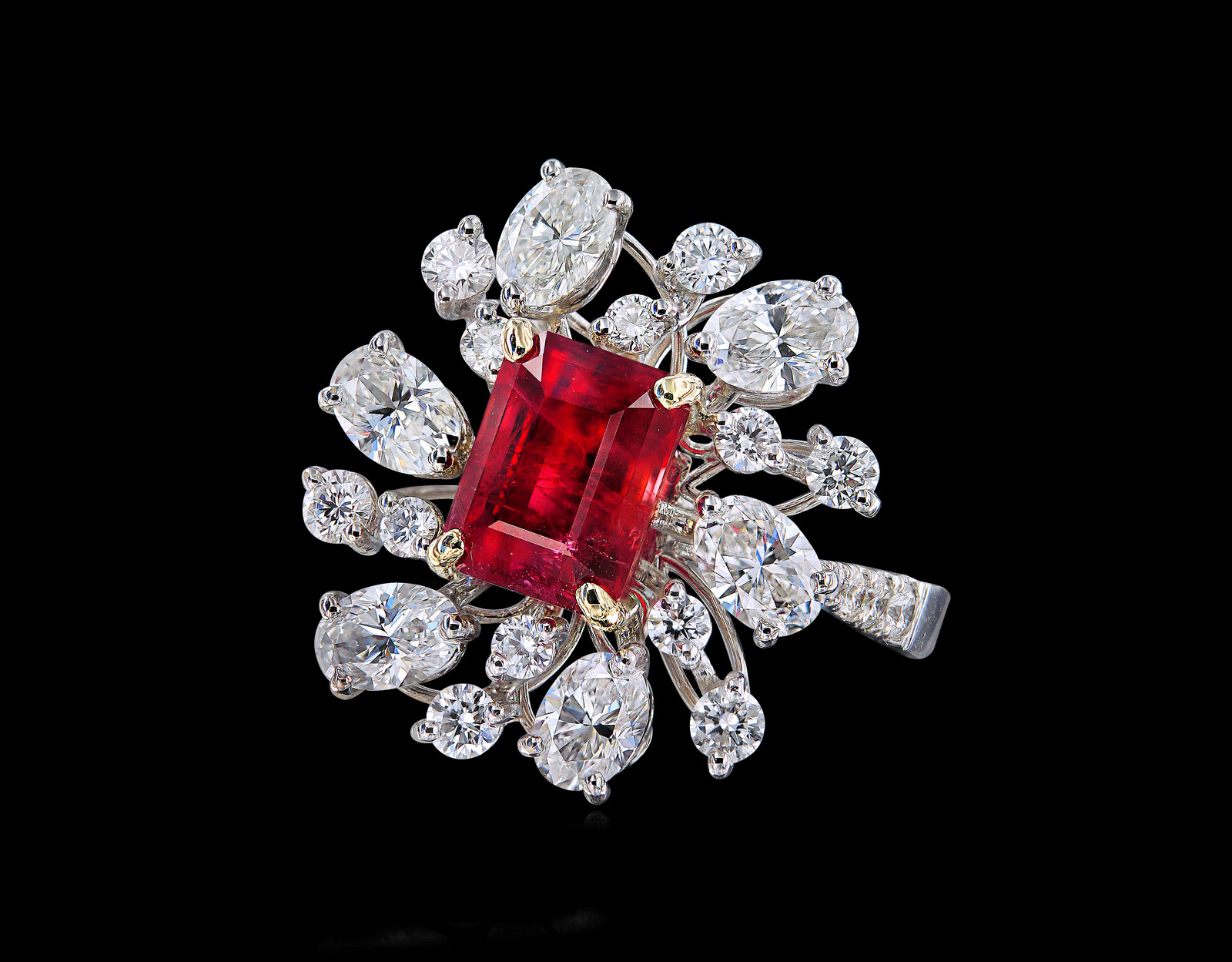 Today, bixbite is only extracted from mines in Utah and New Mexico in the USA. The amount of mined material which is of jewellery quality is quite scant, so a large proportion of red beryls that are found don’t even reach the jewellery market, falling into collections of precious stones. “I have been hunting bixbite for the past 13 years, however we only managed to start collecting these rare gems during the last 5.. Now we have decided to share our precious finds with the world,” says Michael Koh, the founder and designer of the Singapore-based brand Caratell.

Jewellery with particularly valuable gemstones has already become a signature of Caratell in its ten-year history. Now the brand’s collection is comprised of six pieces that include red beryl: four rings and two pairs of earrings. For bixbite, that’s a huge figure; even just having a few in a collection is an achievement for a stone of this calibre!

“We know that bixbite is one of the top 10 rarest gems in the world since the deposit yield is about 0.5 carats of facetable red beryl per ton of ore,” comments Michael. 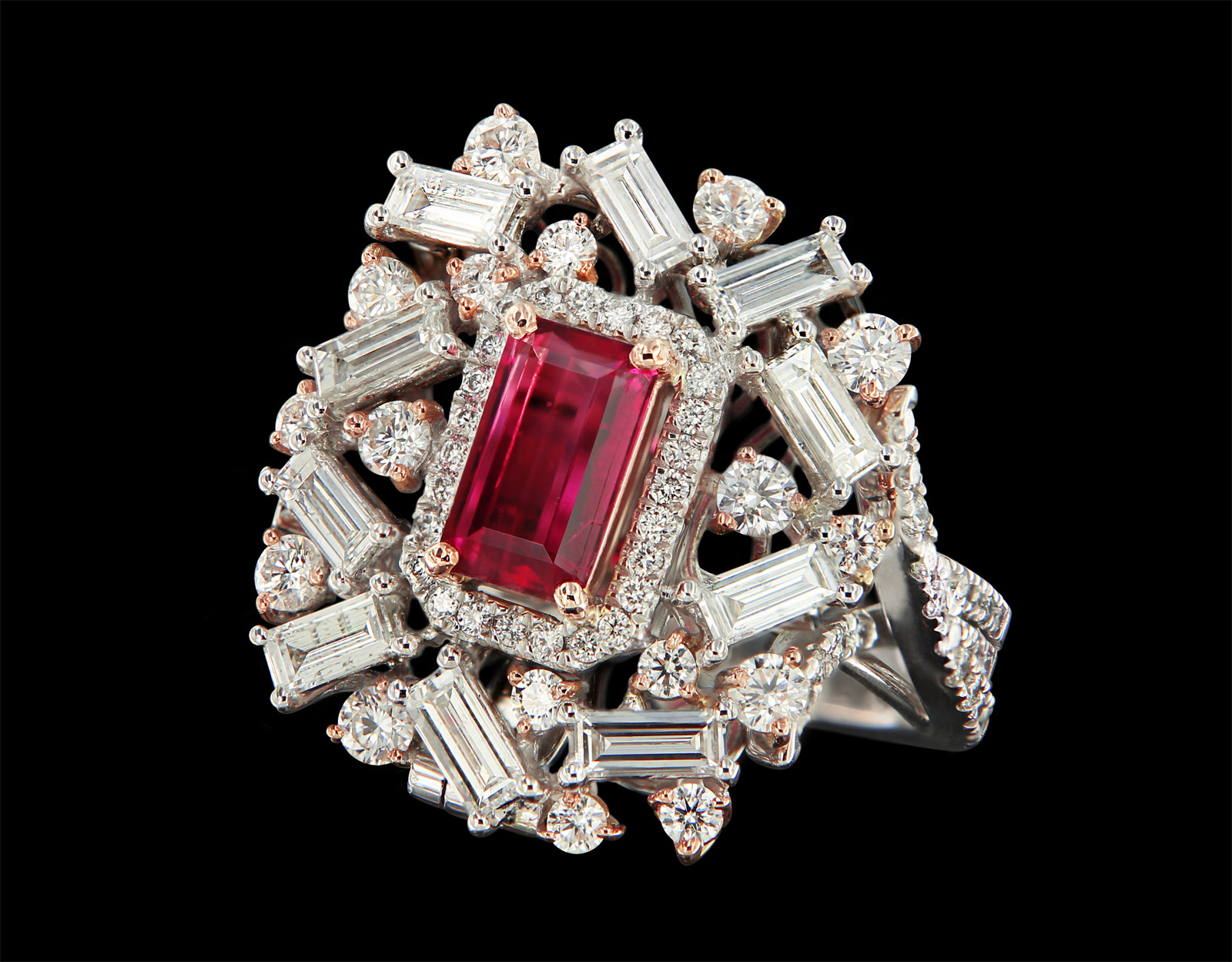 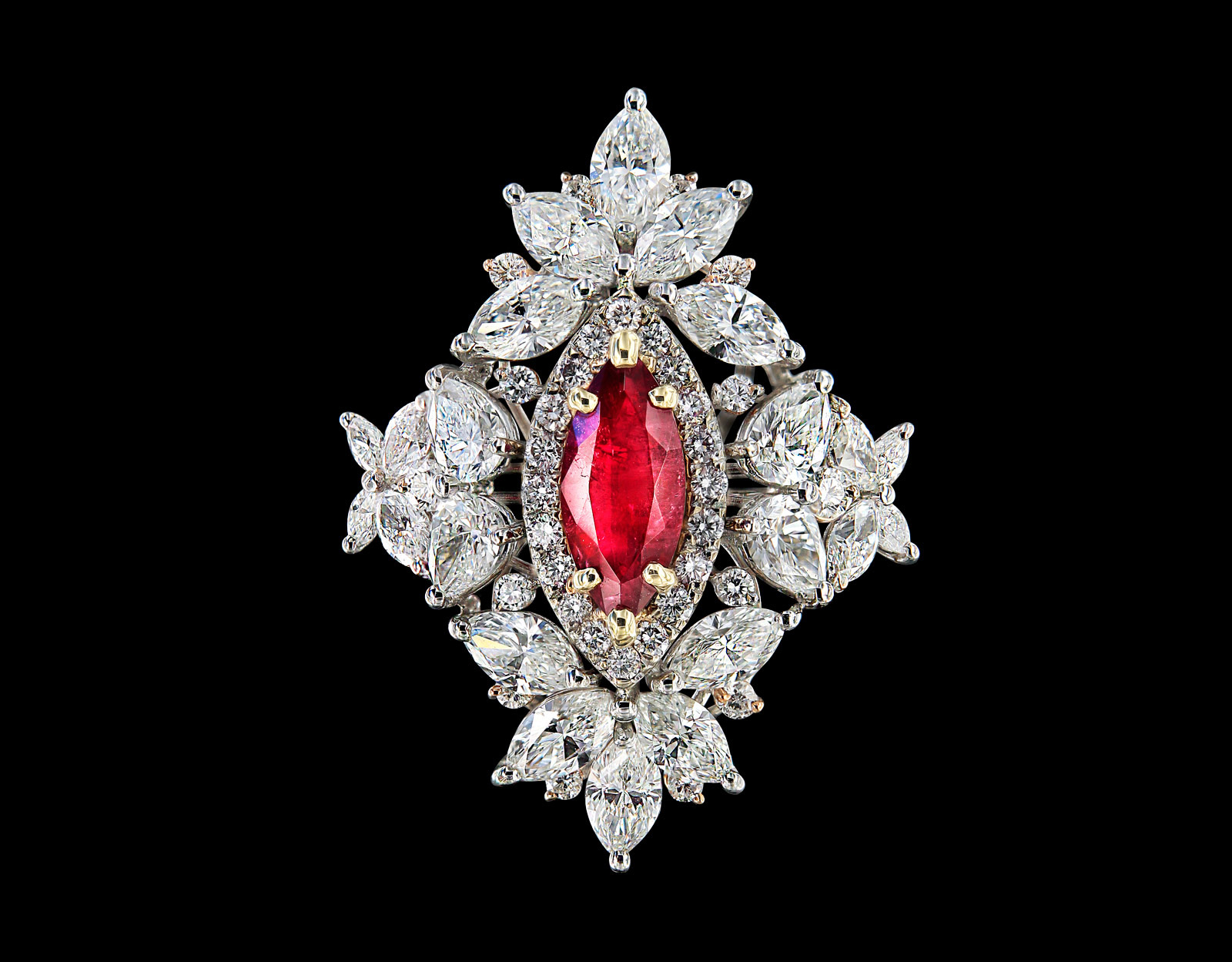 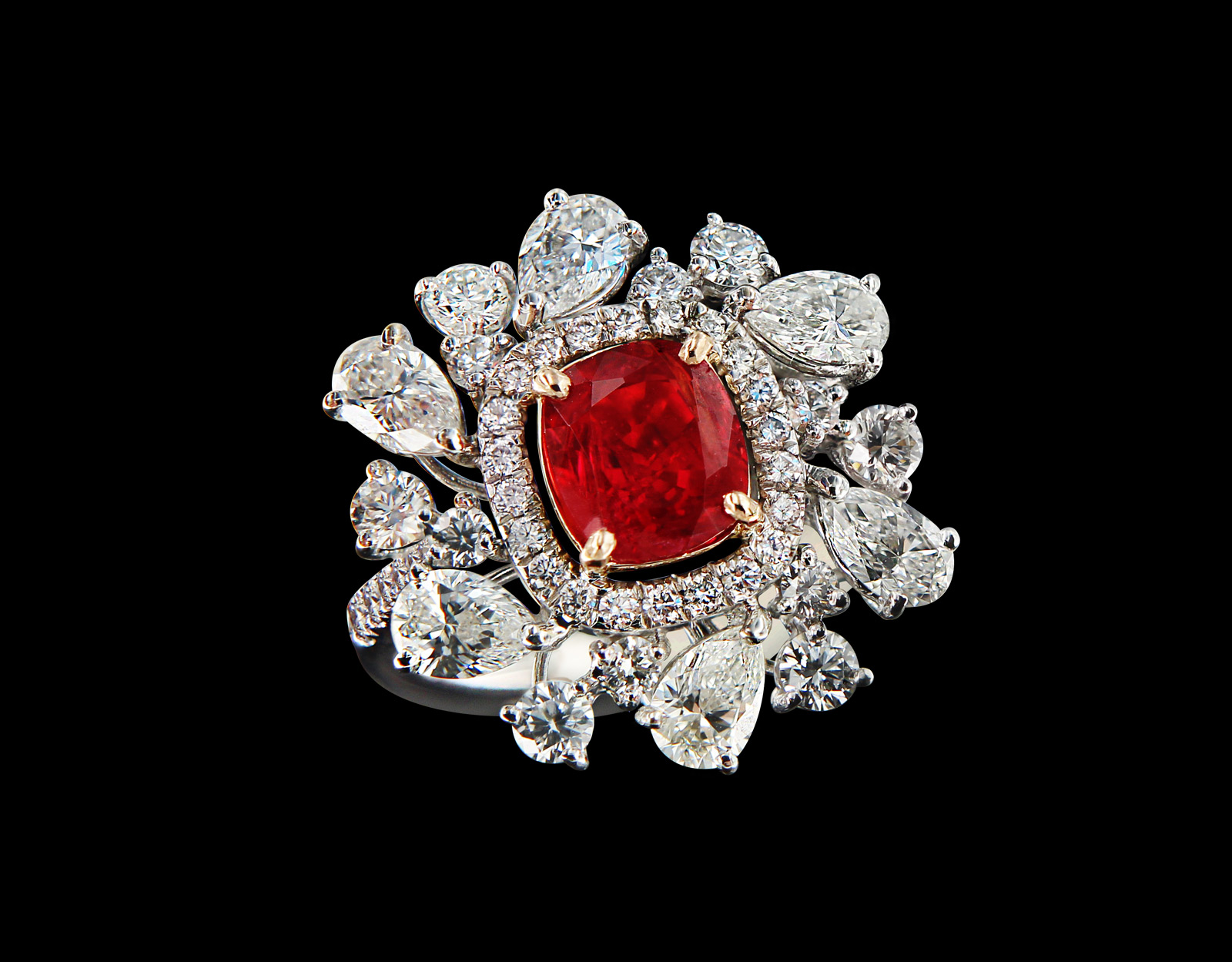 The abstract design of the magnificent six is in no way attached to a particular creative trend or an obvious source of inspiration. The visual make-up of the unbelievably rare bixbite was created to delicately highlight its beauty. The very biggest stone amongst Caratell’s work is a 2.20 carat emerald cut bixbite which adorns the Sun Ray ring; the most “modest” examples are two 0.41 carat stones in a pair of earrings from the same collection.

Michael Koh explained that “most red beryl gemstones are under half a carat in weight, so a 2-3 carat gem would be considered huge. This is why there is an exponential jump in price from 1 carat to a 2 carat bixbite, it is estimated at 5-7 times higher.” A high price indeed – this is probably the biggest disadvantage of this stunning gemstone. 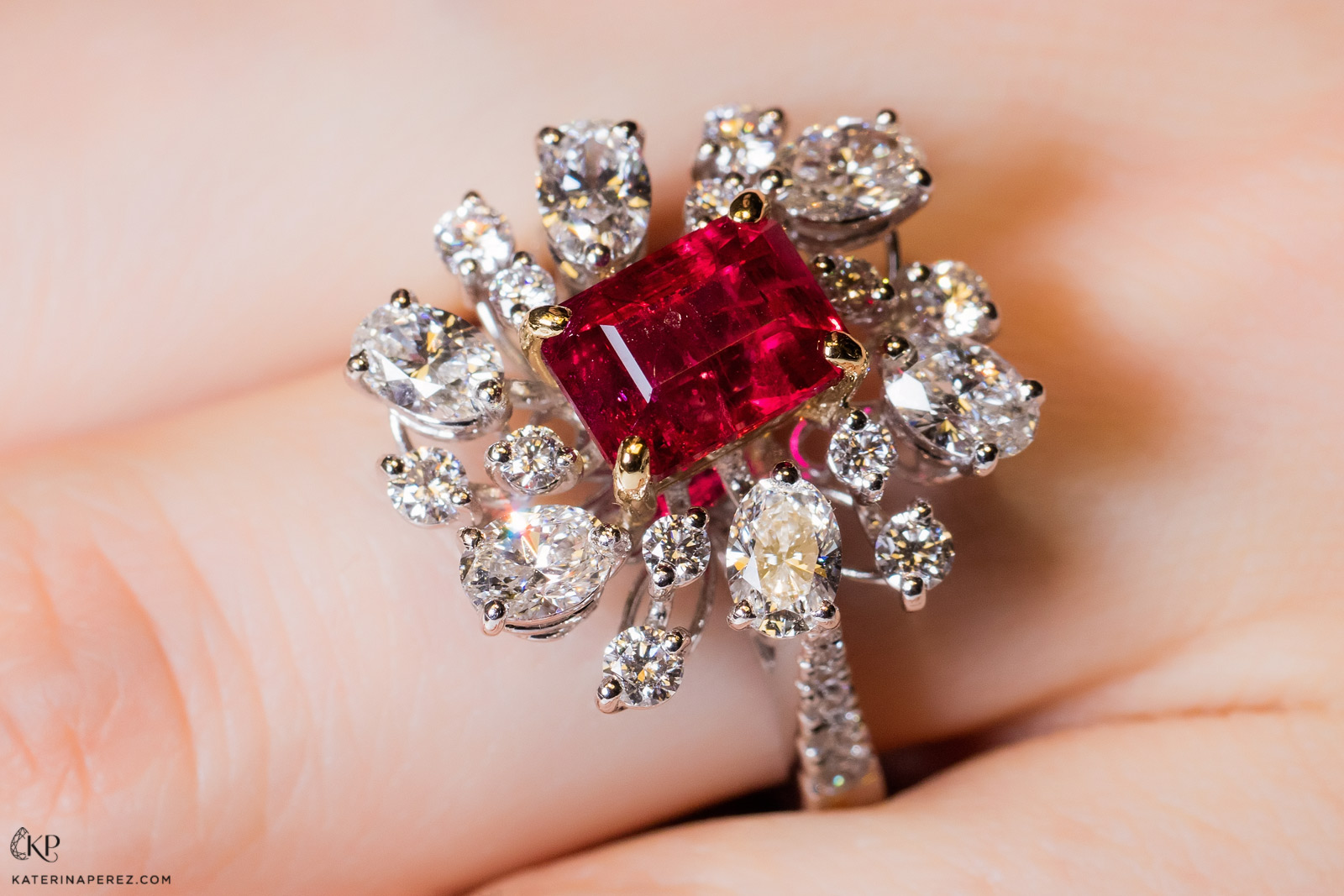 So that you can have an even better idea of how rarely red beryls are found in nature, let’s compare them to diamonds: 2 carat bixbite is just as rare a find as a 40-carat diamond! “It is also said that only one crystal is found for every 150,000 diamonds that are mined,” adds Michael.

So, what accounts for the fact that man has only managed to find this stone in one place on earth? The fact is that the formation of these red crystals demands specific geochemical conditions: firstly, an extensive number of beryllium; secondly, the presence of manganese in exactly the same place; thirdly, the natural conditions that enable the beryl crystals to form. It turns out that, in practice, this is a very complex combination that mother nature rather struggles to duplicate.

Nowadays, the jewellery markets have experiences a real boom in red gemstones, with jewellers more and more frequently designing their pieces with spinel and rubellites, as well as beautiful rubies. 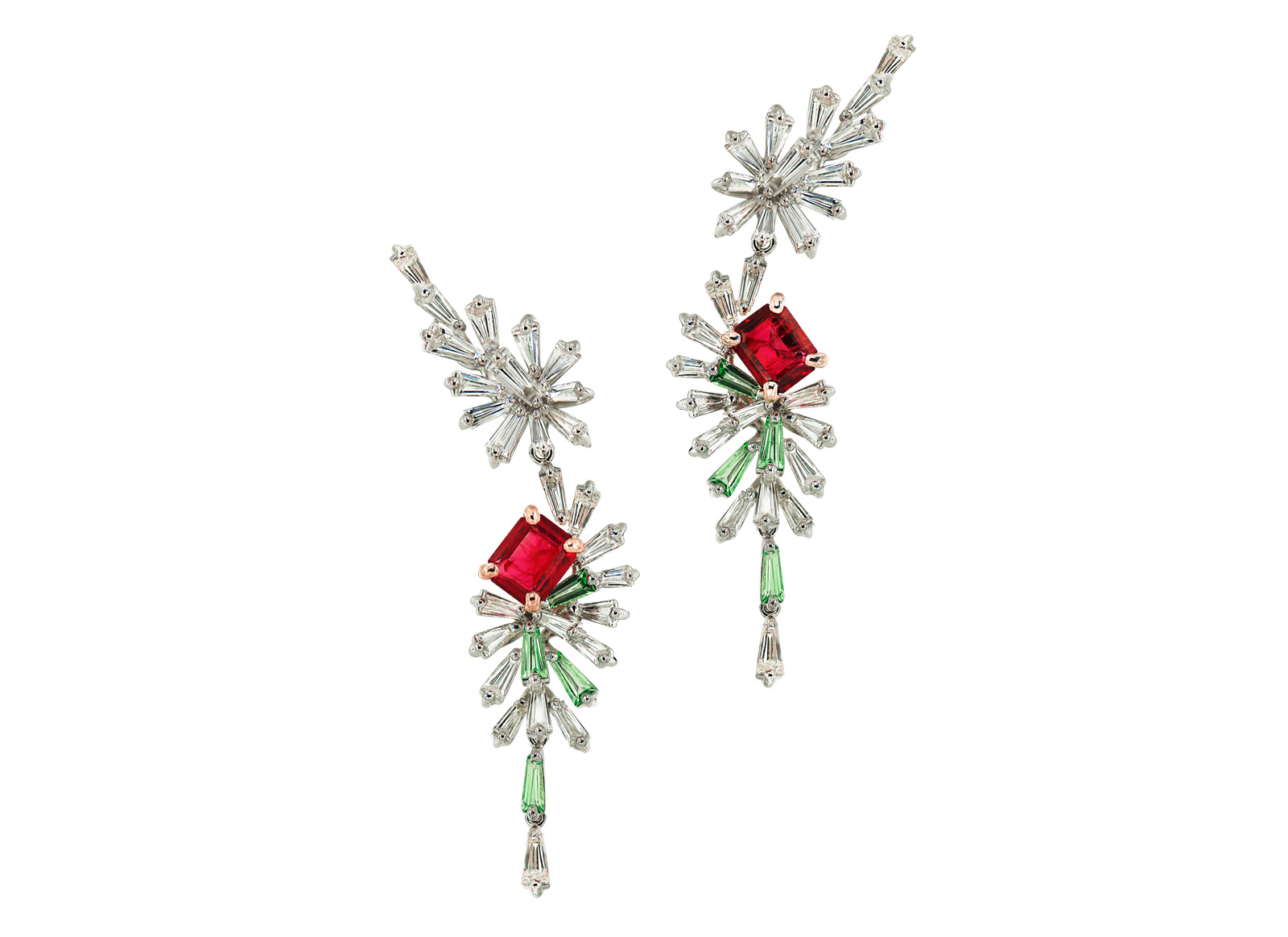 “Bixbite can be easily confused with a ruby, especially if it is of gem quality. However, its inclusions can be a way to differentiate this stone as one coming from the beryl family; its inclusions will be similar to those of emeralds. If looking at those doesn’t help, another way to establish the nature of the stone is by conducting an RI (refractive index) test,” explains Michael when discussing how to distinguish this stone from those of a similar colour.

“Bixbite can be easily confused with a ruby, especially if it is of gem quality. However, its inclusions can be a way to differentiate this stone as one coming from the beryl family; its inclusions will be similar to those of emeralds. If looking at those doesn’t help, another way to establish the nature of the stone is by conducting an RI (refractive index) test,” explains Michael when discussing how to distinguish this stone from those of a similar colour.