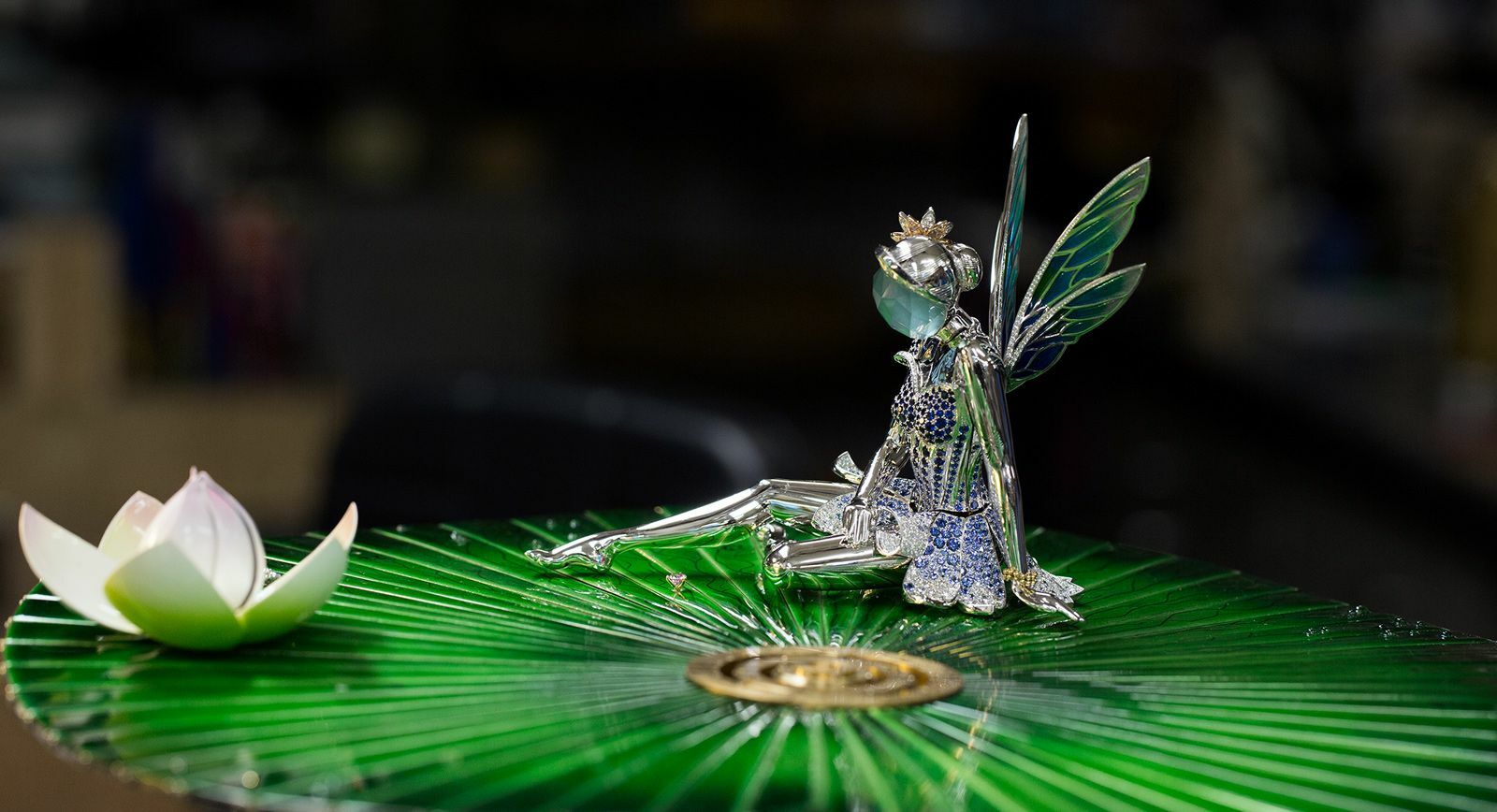 Van Cleef & Arpels consistently surprises with the height of its craftsmanship and freshness of its ideas. This held true at the Salon International de la Haute Horlogerie 2017, where the jewellery house debuted models that demonstrate the fusion of high jewellery with the art of watchmaking, together with an unconventional approach to design and functionality. The unique watch creations of Van Cleef & Arpels extol time, stopping a moment of or opening its secret. Here I want to show how they do this using the example of the most striking models which I saw at SIHH.

The Automate Fée Ondine, which represents a unique combination of mechanic automation and a table clock, was undoubtedly the most attractive exhibit in the Van Cleef & Arpels showroom. Crowds of people constantly gathered around it in expectation that the mechanism would start working. When you switch it on it comes to life in 45 seconds and awakening lily leaves of silver, enamel, yellow gold and yellow and orange sapphires, open before your eyes. To the sound of tiny crystal bells an elegant butterfly of white gold soars. Simultaneously an exquisite Undine fairy made of white gold clad in in a glittering, jewelled outfit made from sapphires and a diamond hat, unfurls her wings, decorated with enamel, and welcomes the delicate lilies. 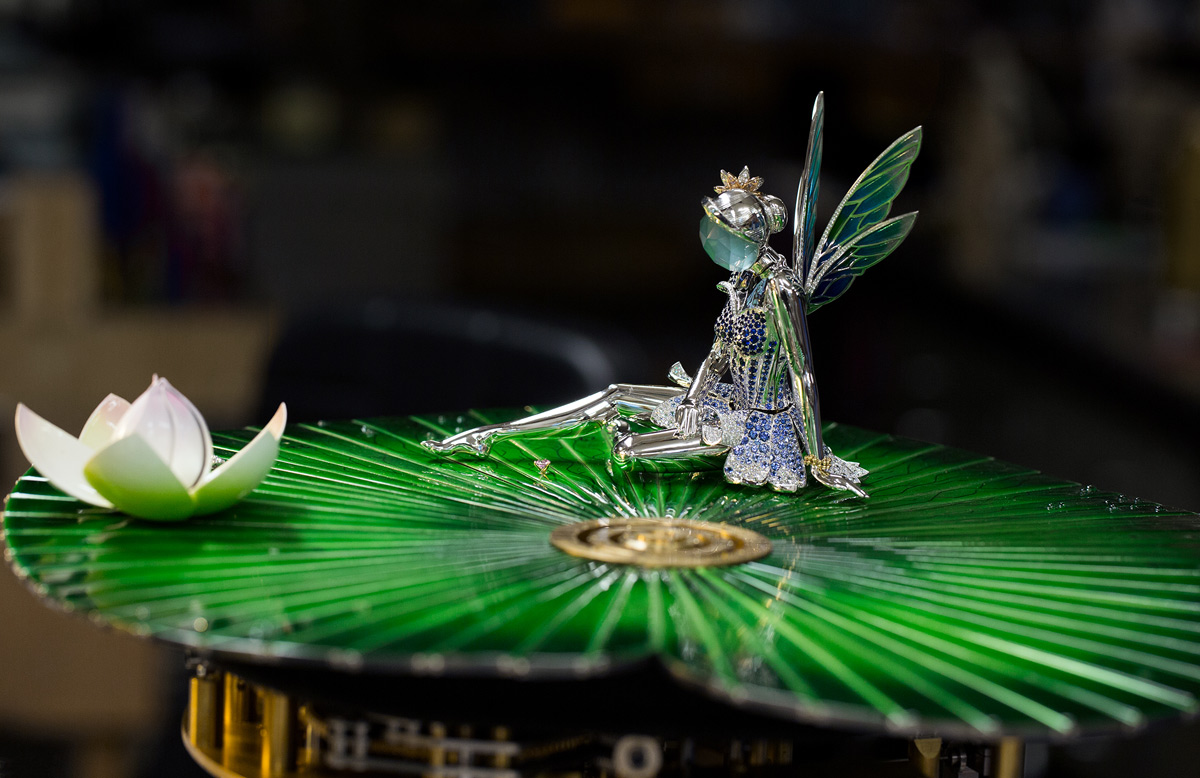 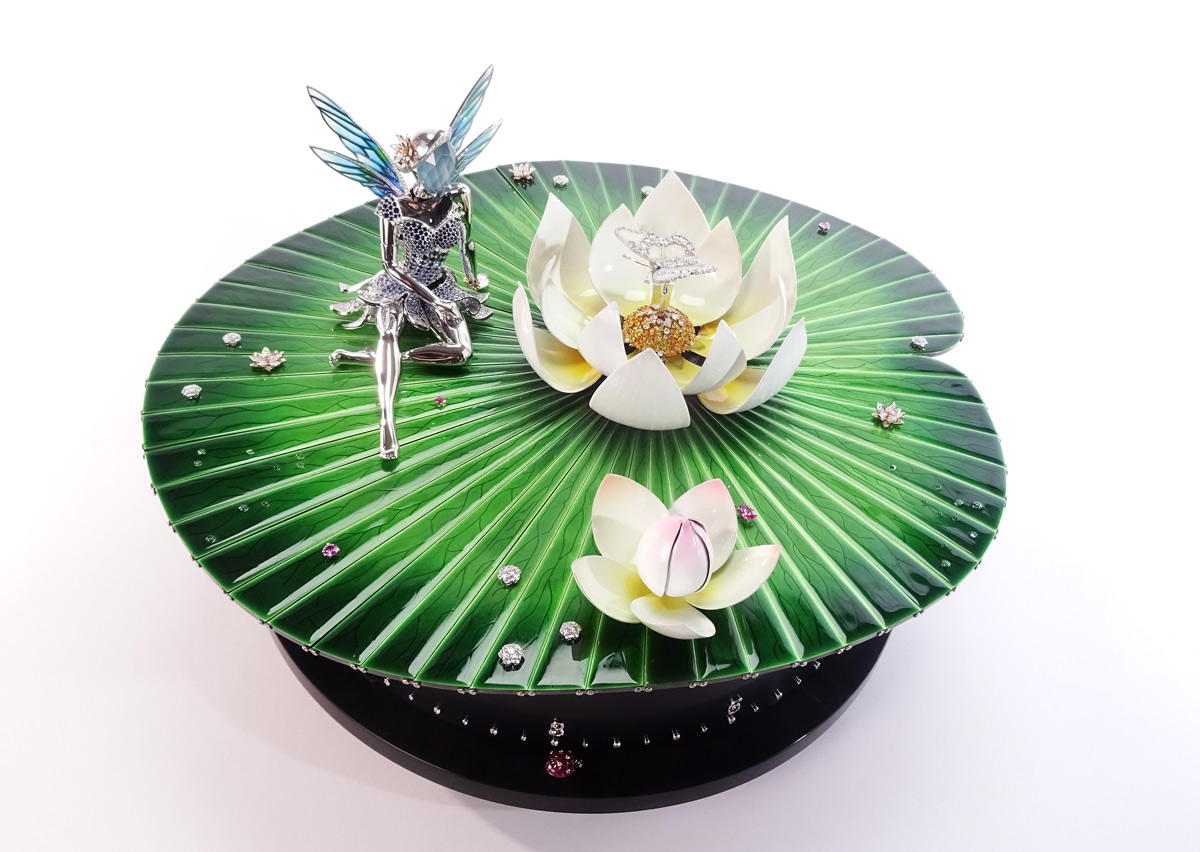 Beneath the platform, in the form of a water lily leaf is the dial, along which runs a ladybird made of rubies in the invisible rim that is traditional for Van Cleef & Arpels. She counts down the hours and upon reaching the 12 mark returns to the starting point in order to start her path over again. The fairy-tale-like composition was produced as a one-off piece under the direction of the mechanism specialist, François Junod, together with the best specialists from 20 workshops in France and Switzerland. Continuing to explore the theme of fairies and butterflies I turned my attention to the Lady Arpels Papillon Automate watch, which shows a moment from the life of a Lepidopteran. A butterfly sits on mother-of-pearl flower next to which grass rises towards the sky.

A poetic dial was created with the aid of round and pear cut diamonds, blue, pink and purple sapphires, mother of pearl, champlevé enamel, paillonné (enamel using gold or silver foil) and glass enamel (including on the surfaced of the curved shape) and also miniature painting. 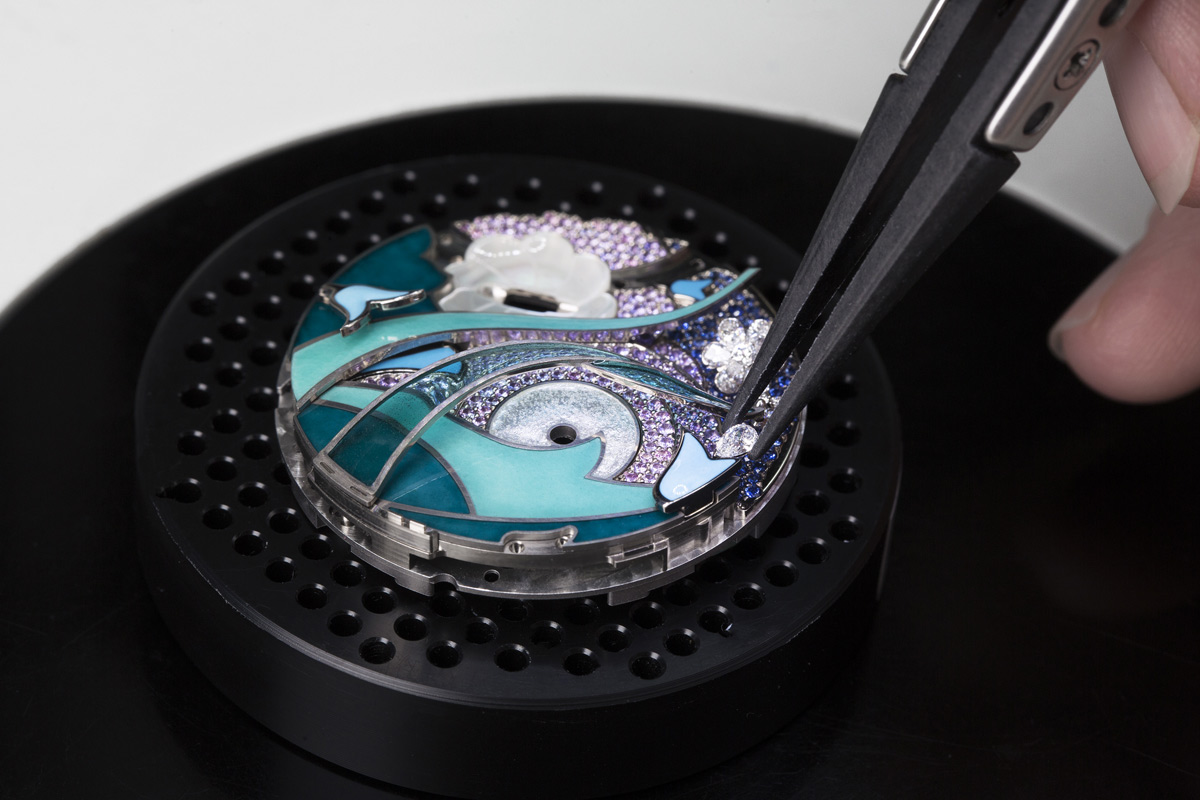 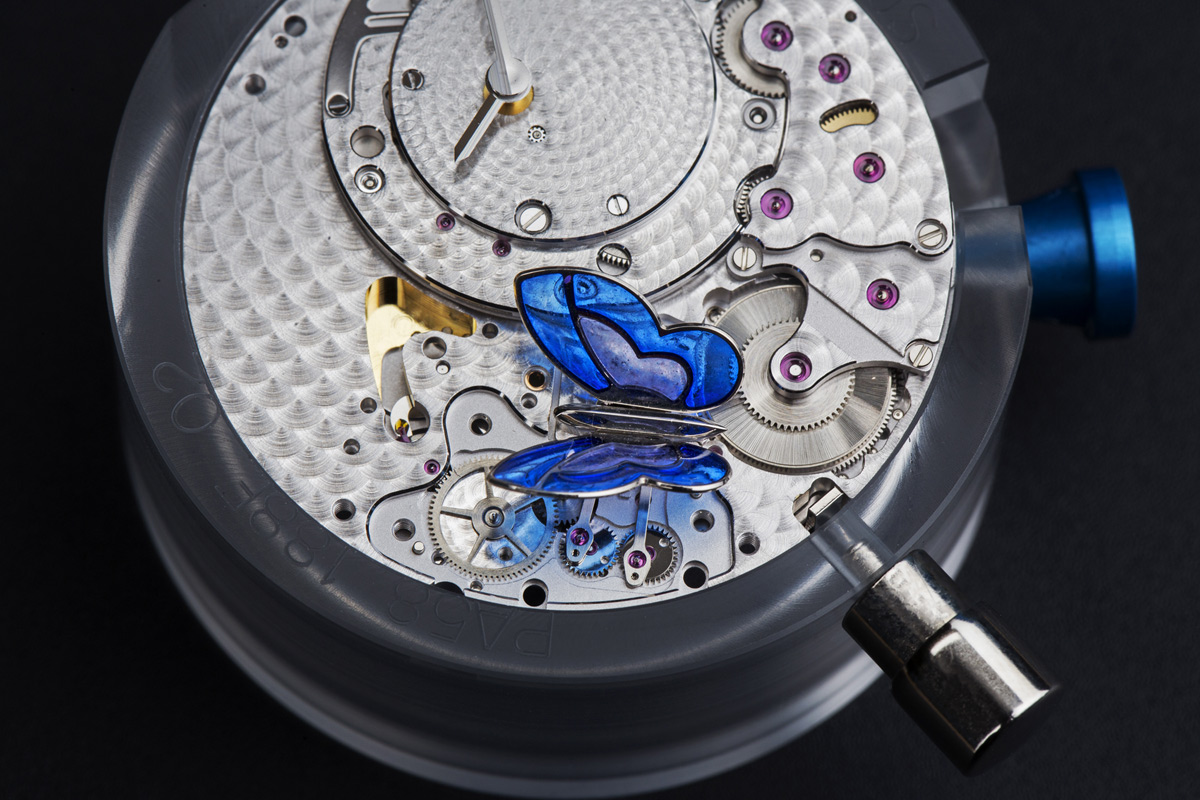 A complex watch module allows the butterfly to flap its little wings in time with the movement of the owner’s hands. This spectacle on the wrist which takes place behind sapphire crystal can also be arranged “on-demand” – all you have to do is press a button on the body and the butterfly begins to flap its wings. The passage of time itself is measured by the hour and minute hand of the small dial. The watch case is made of white gold encrusted with diamonds using the serti neige technique, the bezel and crown is also adorned with diamonds.

When releasing a high jewellery collection, Van Cleef&Arpels does not always present all pieces at once. For example, the watch Heure Marine, debuted at SIHH 2017 – is part of the “Seven Seas” collection, which was released in 2015. Then the watch only existed in the form of a sketch, but at the exhibition I succeeded in seeing a working model, which is a lot more impressive in real life. 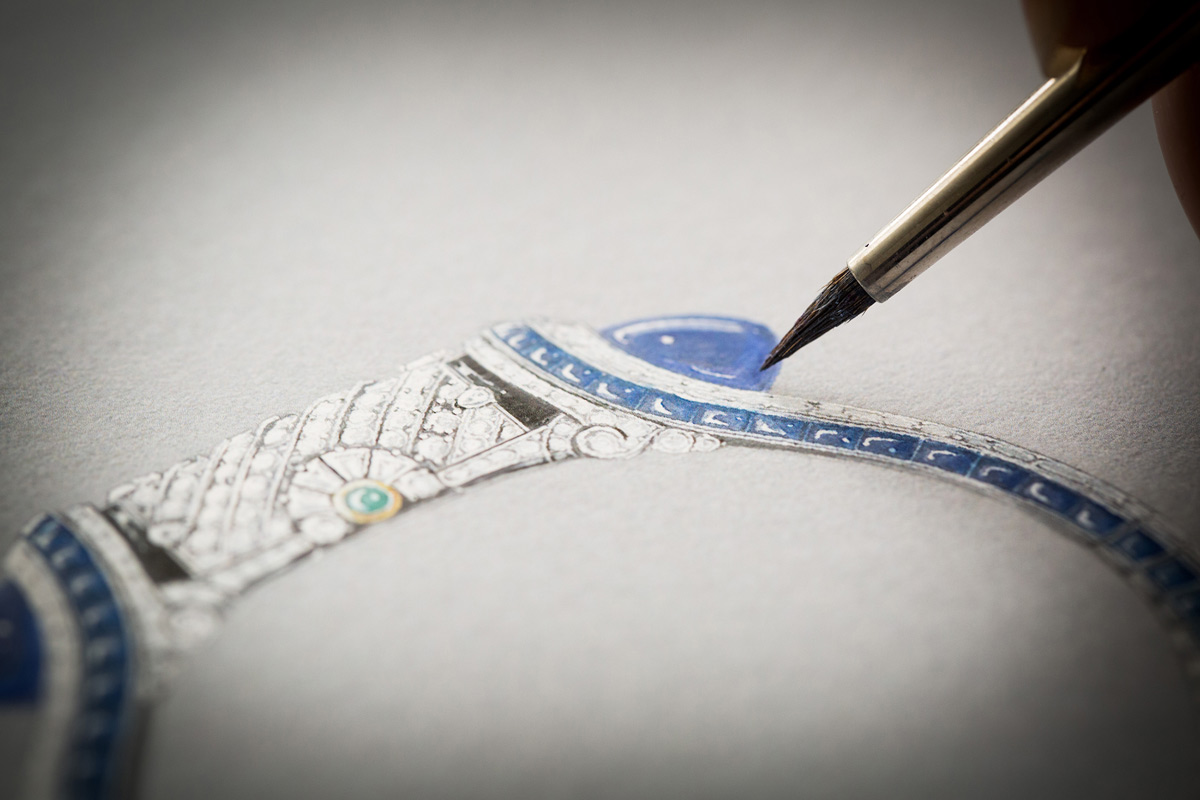 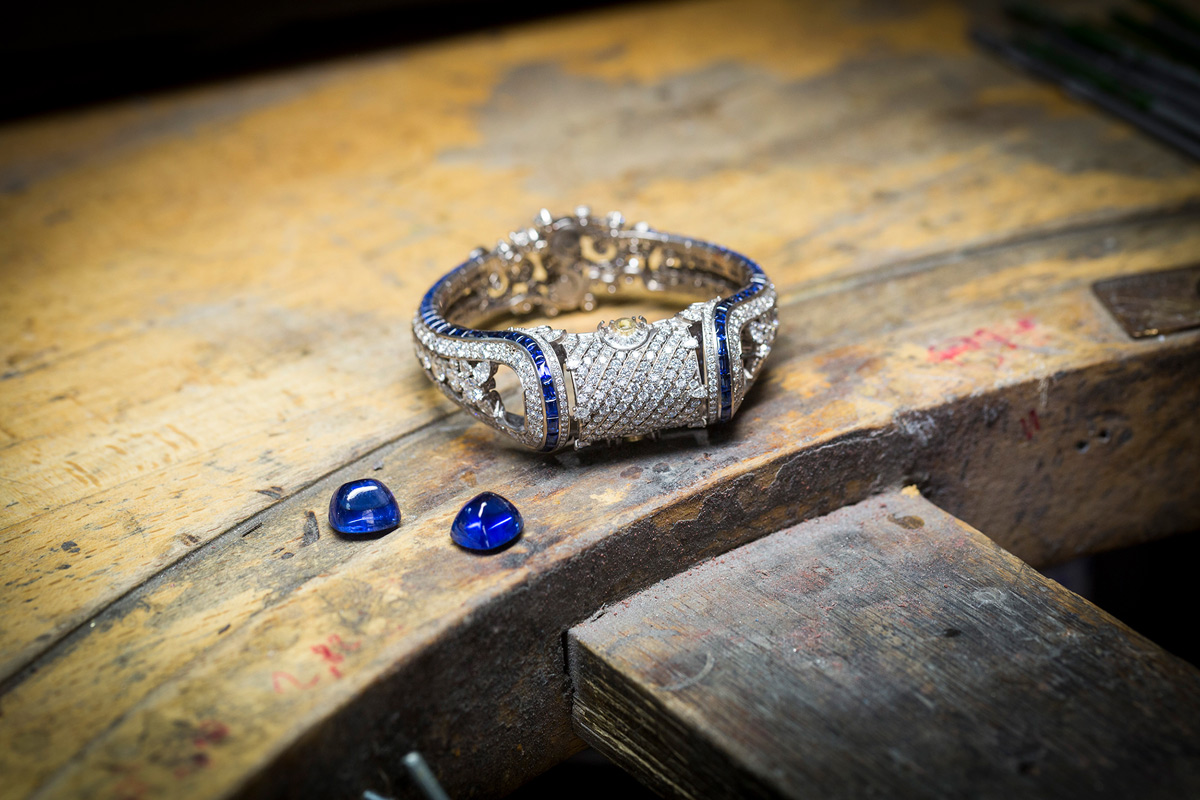 The secret of the bracelet is a diamond cap, under which is hidden a dial, that opens upon the pressing of an emerald cabochon. The model is made from white and yellow gold, round, pear and baguette-cut diamonds, onyx, baguette-cut sapphires and cabochon, and the dial – from white gold, mother of pearl and cabochon-cut sapphires. However, most impressive of all are two Sri Lankan sapphires at the edges of the dial, which are cut in the “sugarloaf” from and have a total weight of 27.34 carats.

And the last masterpiece of watchmaking art, which it is impossible to ignore – is the necklace with the Cerf-Volant pendant watch. It is made of shiny black spinel and onyx, white diamonds, cultured pearls and rubies. A long necklace crowns a pendant watch that has an original approach to telling the time: you can open the casing, which is suspended on a moveable structure made of onyx beads, and look into a built in mirror which reflects the watch’s dial, decorated in onyx, mother of pearl and rubies. The original way of displaying the time became possible thanks to the quartz movement, which shows the time in the opposite way to the classic dial movement of hands. It is only by the mirror that you can see the habitual passage of hours. 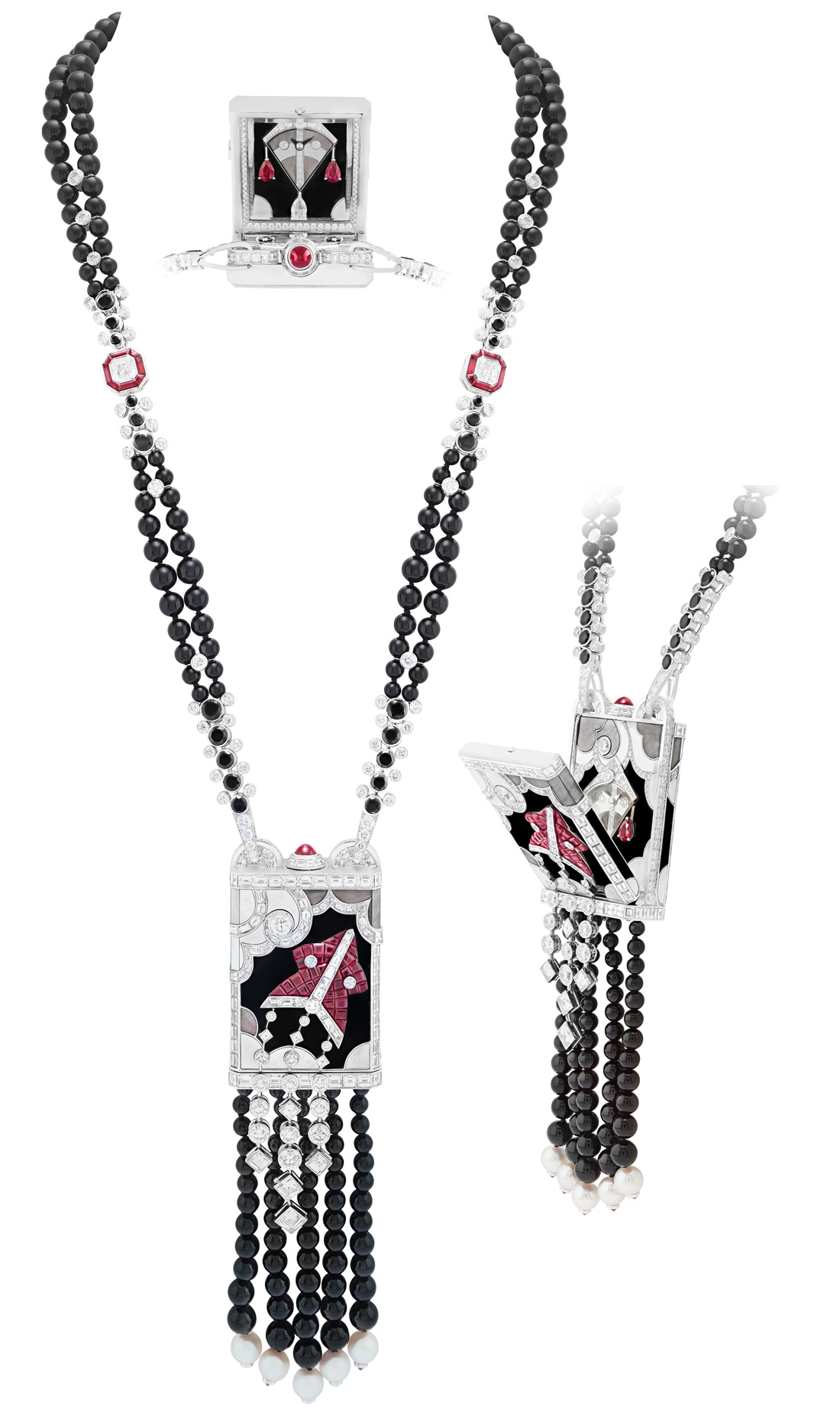