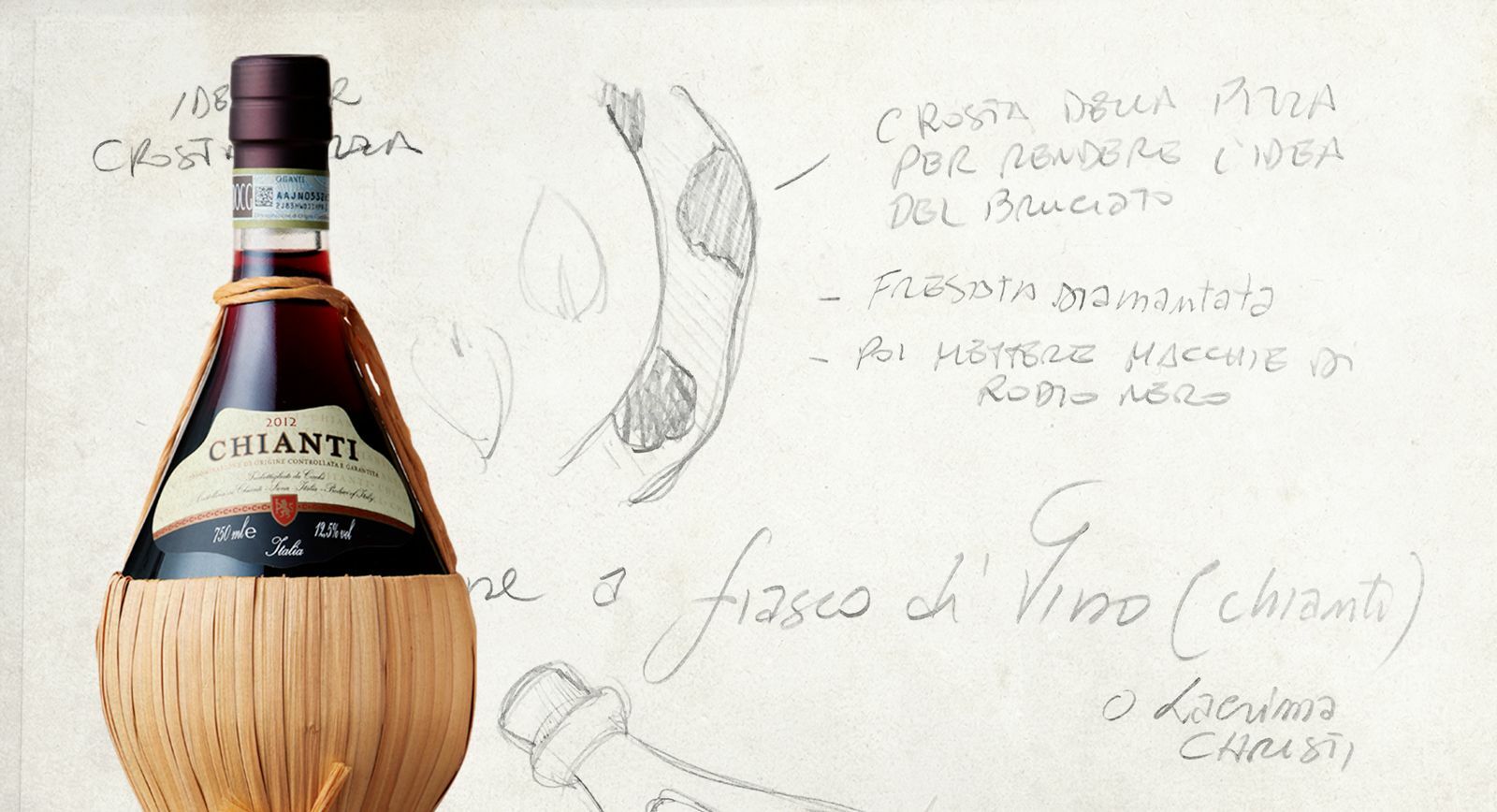 Alessio Boschi is known for creating spectacular fine jewellery designs which incorporate multitudes of concepts. The complexity of his creative endeavours is perfectly exemplified in his latest masterpiece - the 'Bella Napoli' necklace. Every possible facet and angle of this creation features a symbol of Naples: the food, coffee, music, dance, colours, theatre, traditions and folklore of the city are all paid tribute to in gemstones, enamel and precious materials.

Alessio will be exhibiting at VicenzaOro 2018 - and to mark the occasion, the designer chose to debut a creation that would be the quintessential representation both of Italian culture and its folklore, as well as Alessio Boschi’s style and design philosophy. Alessio continues on the inspirational avenue of the 'Grand Tour' of Italian cities, the monuments, and most recognizable icons related to those places within the 'Bel Paese’. 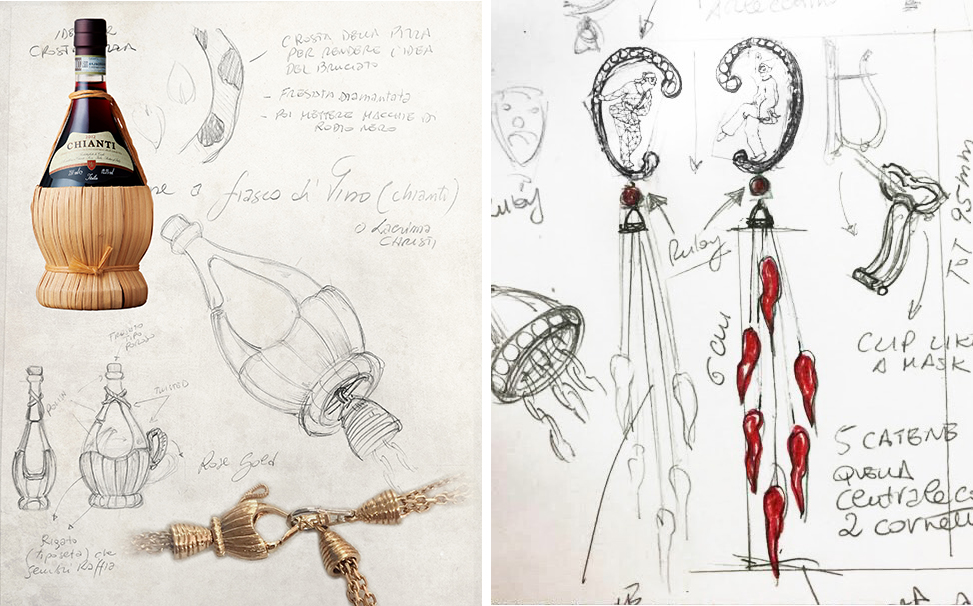 Firstly, the feature gemstone of the ‘Bella Napoli’ necklace is a morganite which displays a peach tone, and contains needle inclusions that give a lively nuance to the design. The gem was specially cut to emulate a theatre stage; with one large facet and one smaller behind which allowed any image positioned next to the smaller surface to be magnified. This characteristic gave Alessio the idea to create a small stage, like those in the street theatres of Naples.

These ‘Commedia dell’Arte’ were filled with comic and tragic characters such as Pulcinella - the main character of Neapolitan Puppetry - and Arlecchino the harlequin, both of which are represented here, cast in gold and hand enamelled with the colour of their traditional costumes. An intricate system of two pins passing through those chains and fixed with two keshi pearls on their extremities allows the opening or closing of the curtain, disclosing the scene of the two main characters of the Commedia Dell’Arte trembling behind the screen created by the cutting of the morganite. 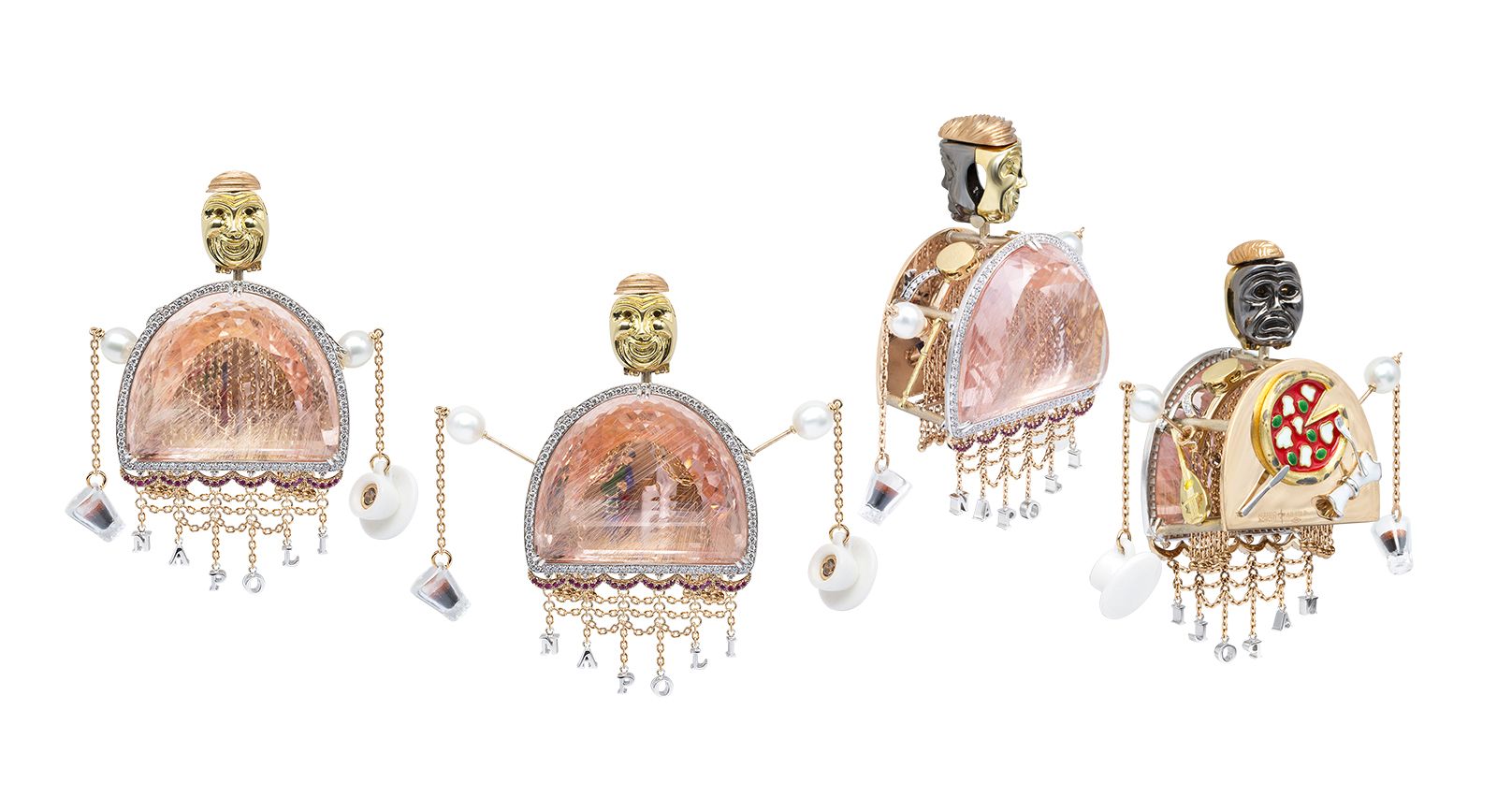 The large gemstone is framed by a line of white gold encrusted with diamonds, and connected to a semicircular plate of gold engraved with a scene picturing the gulf of Naples - it was the historical background of the port which provided the context to allow Alessio to use Roman columns to attach the plate to the frame of the stone.

When examining the high point of the morganite and diamond arch, you will see that it is crowned by theatre’s laconic ‘comedy and tragedy’ masks - one in black rhodium coated white gold and the other one in yellow gold. The two masks rotate - giving the wearer the choice to decide which one to show, and atop of the masks is another figural representation of Naples: the sfogliatella pastry, which has been textured by hand to reproduce the crisp ruffles of this traditional treat. Popular instruments of the Neapolitan region also decorate the sides of Alessio’s ‘theatre’: tambourines, a flute and a mandolin. 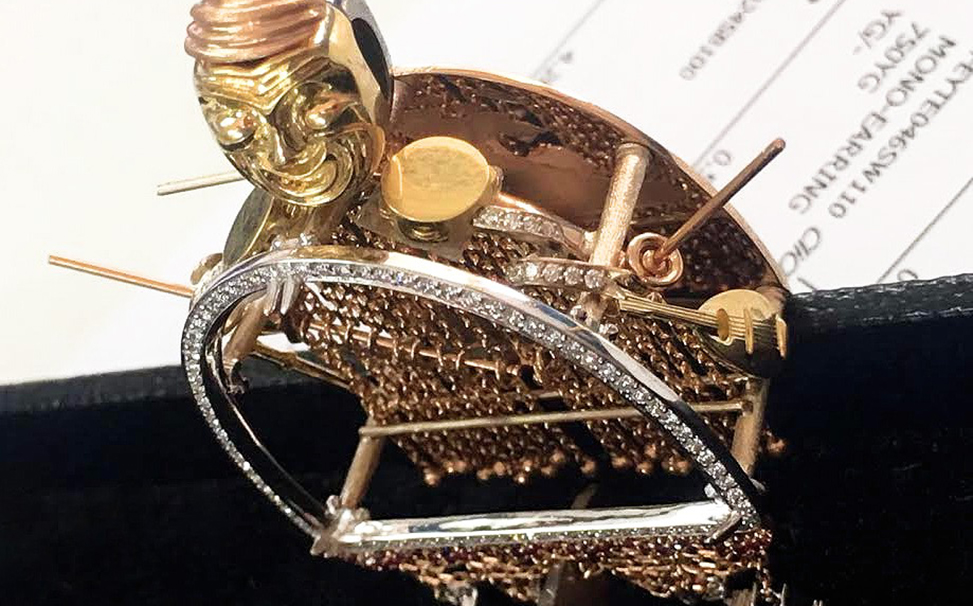 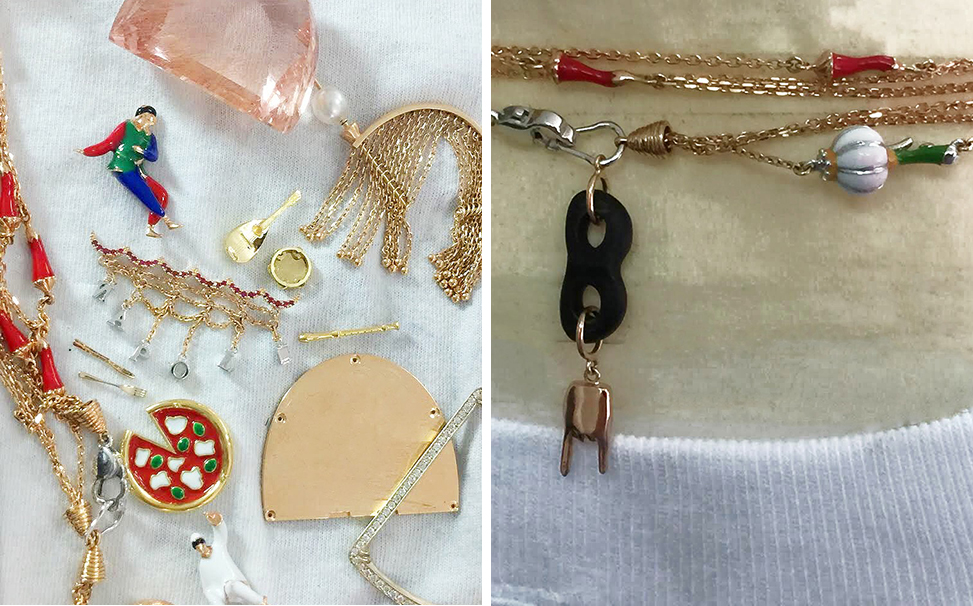 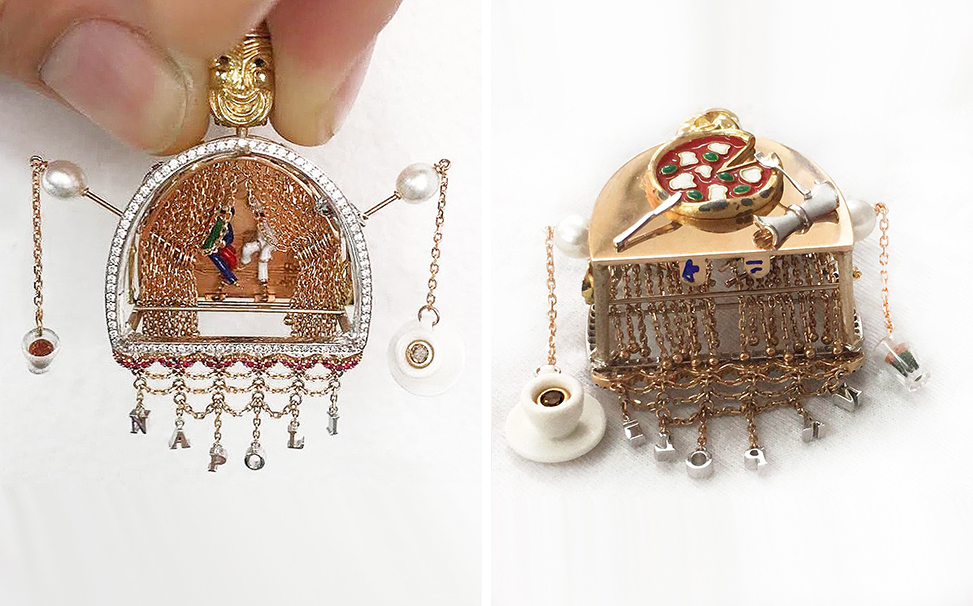 The food of Naples is celebrated in extraordinary detail and variety in the 'Bella Napoli' - from bulbs of garlic, miniature espresso cups, pastry, wine and even the most famous Neapolitan food - pizza! This invention of the Neapolitan people in its simplest form was decorated with enamel in the colours of the Italian flag, and the level of detail in this design is epitomised by the black rhodium spots which imitate the burned crust caused by the wooden oven!

25 curnicielli adorn the chains of the necklace: the curniciello is a red horn which is symbolic of luck, and according to the traditions of Naples will ward off evil. The red enamel of the horn is used to signify both power and victory, and the power of the talisman is determined by the design: it should be twisted, rigid and pointed. The final detail of the ‘Bella Napoli’ necklace is the golden hand which is forming the gesture of the ‘horn’- the hand is closed, except the index and the little fingers, and the fingers are pointed down. This gesture is known in the South of Italy is used to drive away bad luck and evil spirits. 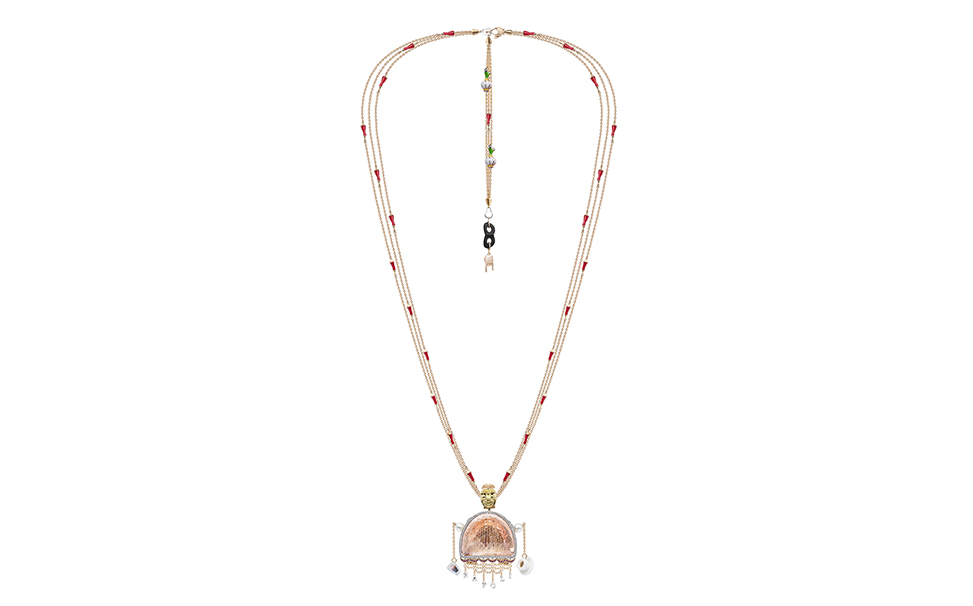 Finally, the crowning detail of the necklace are the bold, capitalised letters which dangle from the chains around the ruby garland base of the ‘theatre’ within the necklace - proclaiming the ultimate inspiration for the entire creation: ‘NAPOLI’. If you are visiting VicenzaOro, make sure to visit Alessio Boschi in the Design Room at pavilion 7 booth 280, and witness this fine jewellery homage to Naples for yourself.