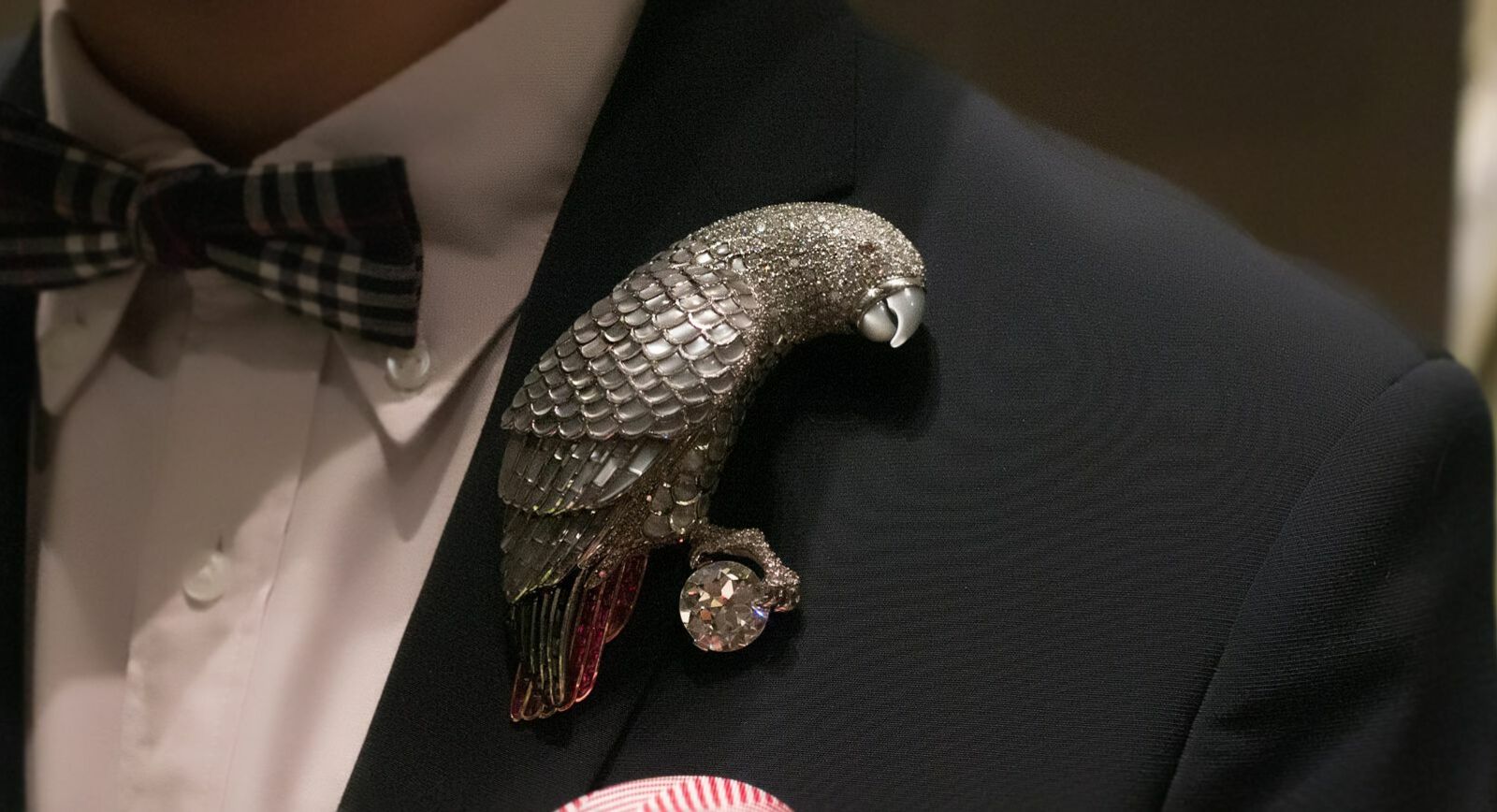 Every year I return to Masterpiece London Fair that runs for around ten days from the end of June until the beginning of July. Why have I not missed any of its four latest editions? Because of spectacular jewellery of course! Antique dealers present some unique pieces created by the great masters of the past, modern jewellers prepare special one-of-a-kind creations and participating brands bring out their most spectacular jewels. Without further ado, I suggest we take a look at the masterpieces that caught my eye this year.

Wallace Chan’s ‘Music on my Mind’ necklace is befitting of the Masterpiece title, wielding rare Burmese rubies, opals, pink sapphires and diamonds. It has lapis lazuli backing the opals to enhance their vibrancy, and blue topaz atop of the opal to protect it. Wallace Chan chose to marry the intense red of the Burmese rubies with the combined blue of the opals and topaz, because “people are excited by the red, and calmed by the blue.” The name alludes to the form of the necklace, with the titanium setting oscillating like sound waves in music, or indeed, as Wallace Chan himself described it “Pulses, like a heartbeat.” This necklace is certainly not a piece for the faint of heart! 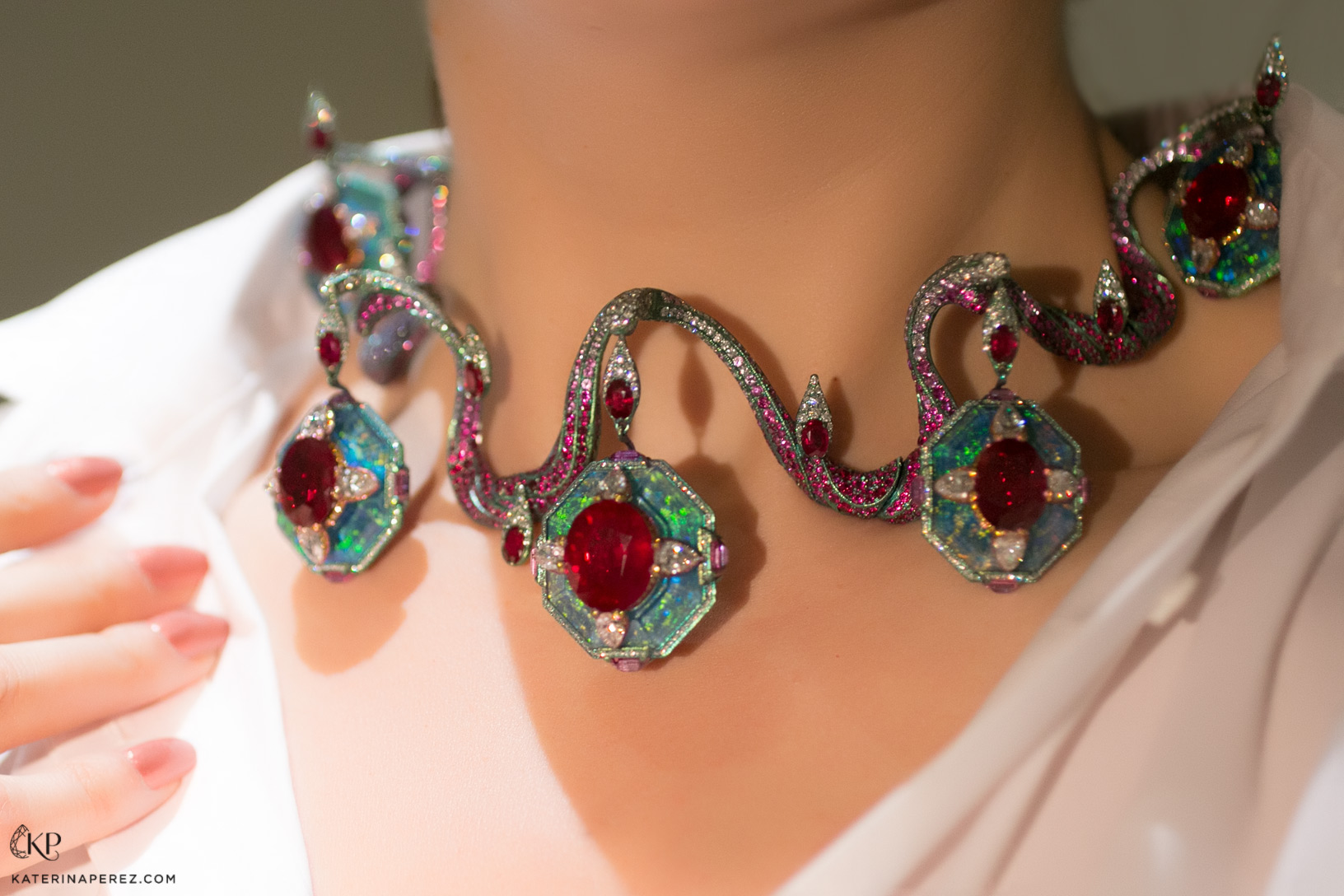 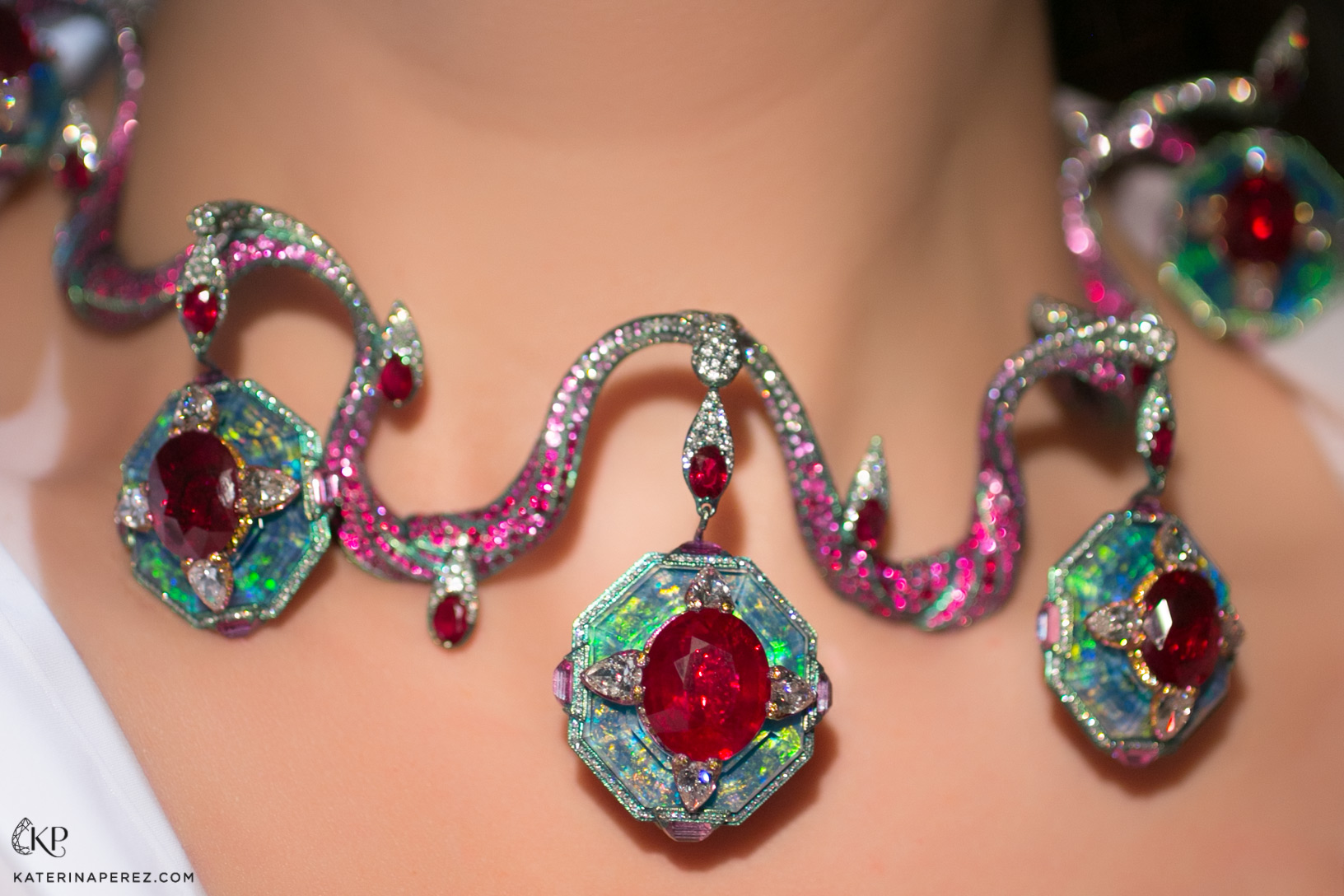 This Chatila bracelet is extraordinarily special as it features one of the largest certified rubies in the world. The stone in the centre is cleverly accentuated with diamonds and ruby beads, that burst from the decorative motif in the centre as if they were beams of light shooting from the sun. The oval Burmese ruby weights impressive 61.37carats, and with such a vivid, intense colour it truly becomes a real find for jewellery collectors. 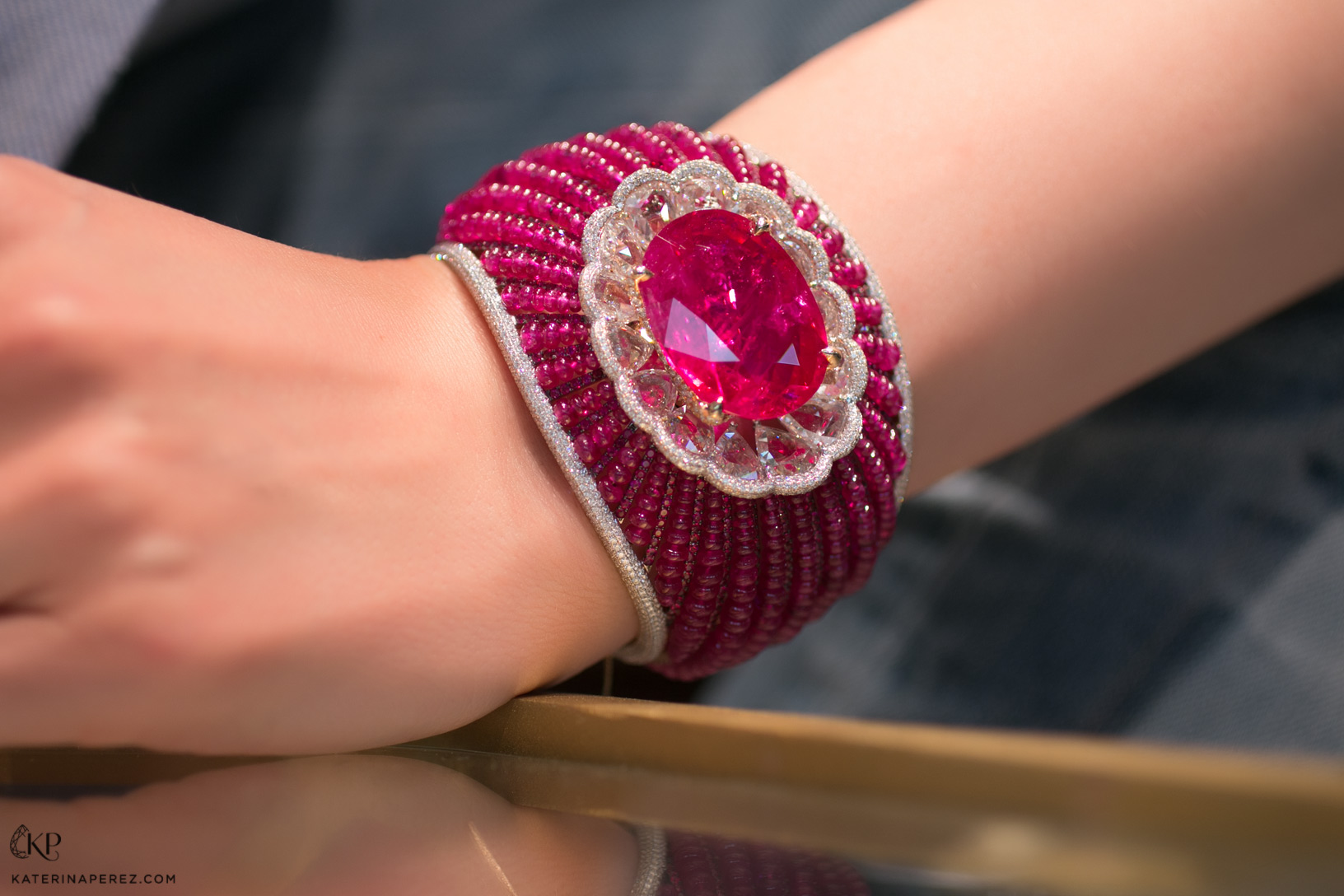 The Boghossian Merveilles collection rings were designed to perfectly show off the amazing saturation of colour in the central gemstones as well as the unique technique of setting diamonds around them. The contemporary and unique Merveilles mount allows 8.26cts blue sapphire, 9.92cts Brazilian Paraiba tourmaline and 8.15cts purple sapphire to engage with light to maximum and demonstrate their colour to its best. Neither of the gemstones have been enhanced by the heating process so that they can demonstrate their genuine natural potential. 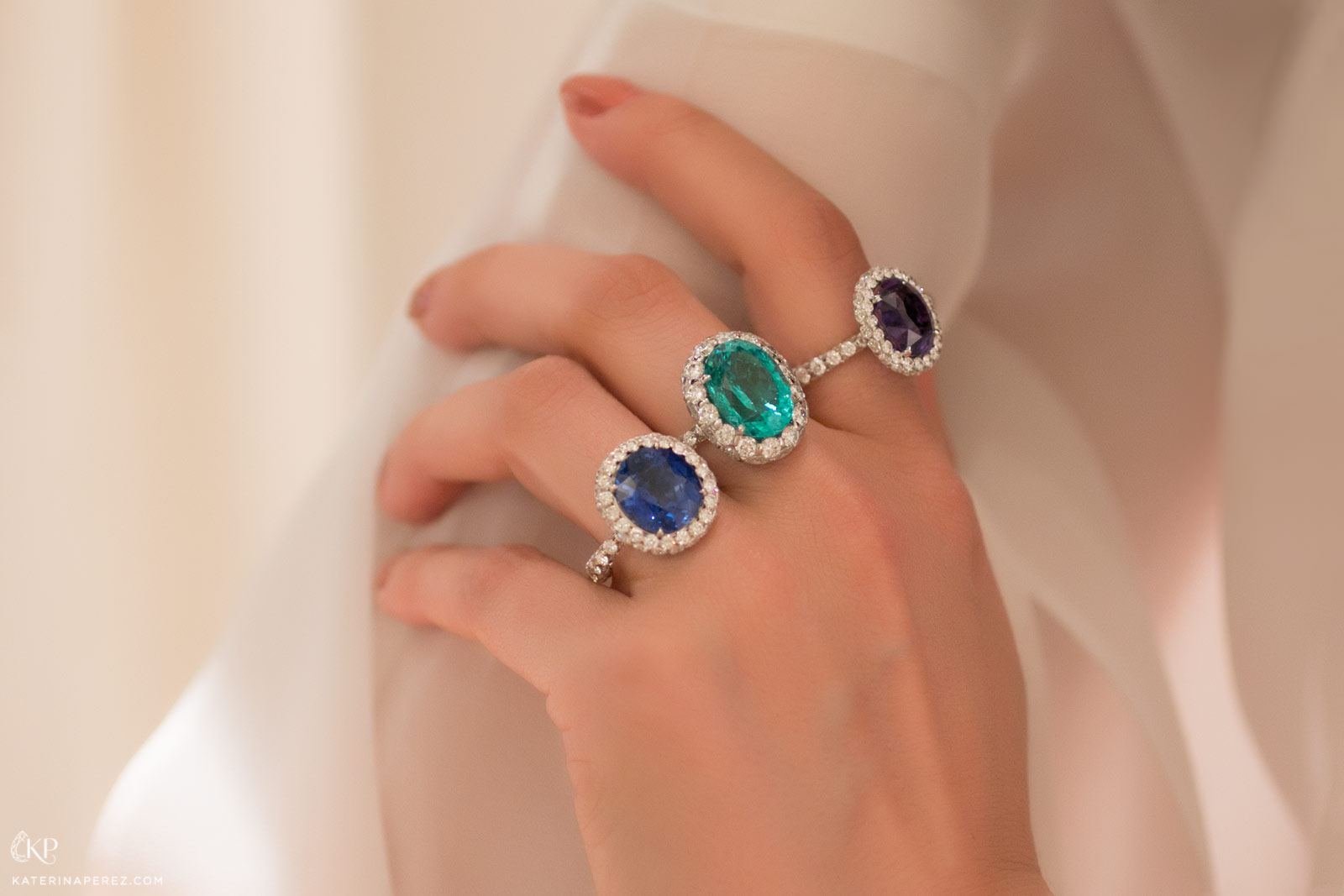 Véronique Bamps has devoted herself for more than twenty-five years to European and American jewellery dating from the early 19th century to the 1950s. A true specialist in antique pieces, she selects jewellery for its style, originality, striking aesthetic qualities and techniques. All of those qualities are reflected in statement JAR ear clips I chose to feature. They are created in TOI&MOI style meaning that the earrings are not identical but look perfect together. Indeed, egg-shaped garnet and tourmaline look striking surrounded by amethysts and diamonds. 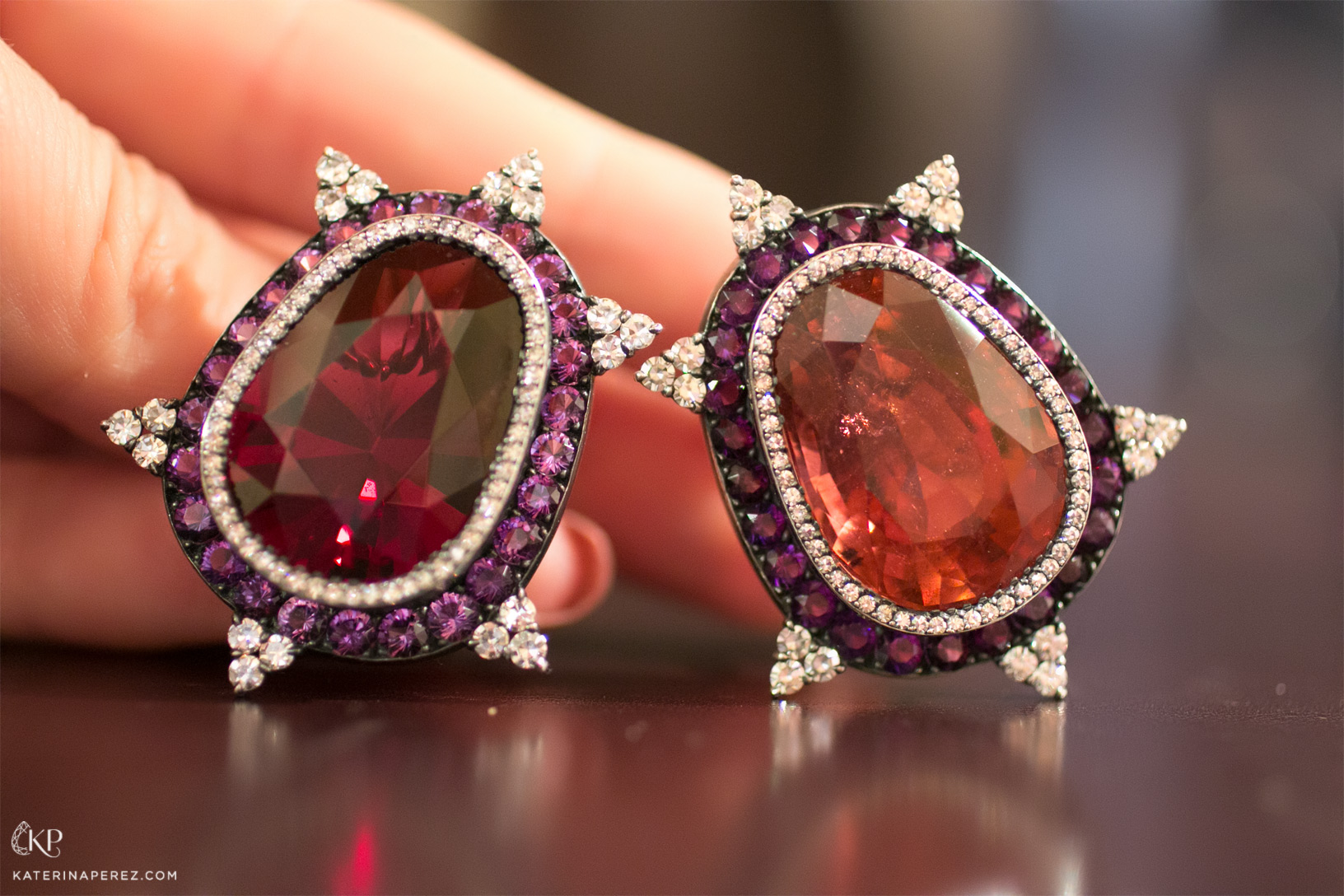 Wartski presented their ‘Cicada’ brooch, created by Frederic Boucheron circa 1900. This piece boasts incredible craftsmanship that is required to achieve the intricate enamelling technique which creates the fine plique-a-jour on the wings. They are so translucent that you can view light coming through the colourful enamel - to accomplish such fineness of enamel is a skill which not many in the world have. The body of the Cicada is set with sapphires and diamonds, meaning that the Cicada takes flight and transforms into a piece of high jewellery. 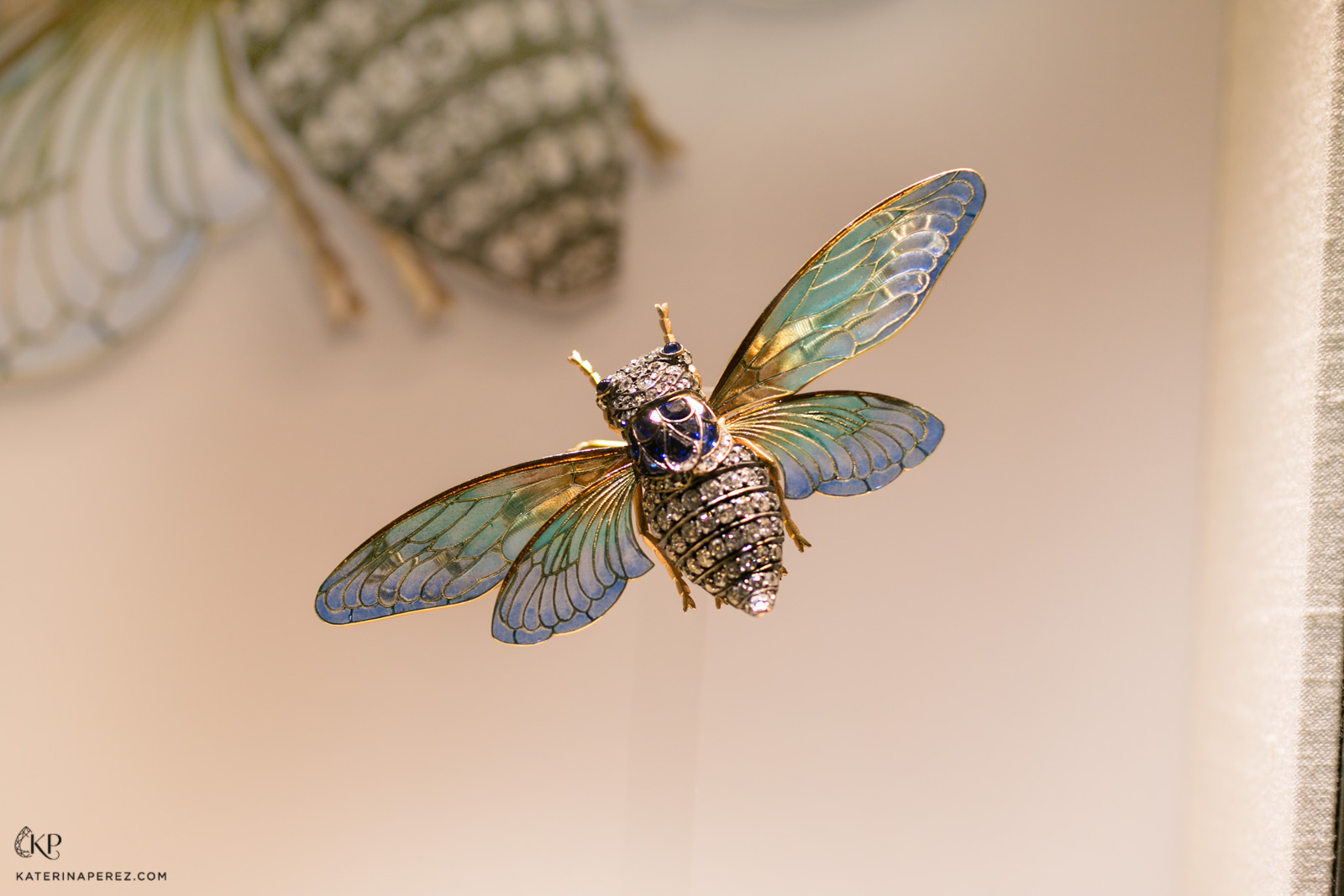 The most eye-catching pieces are not always the ones with the largest gemstones - as proved by this pendant from A La Vieille Russie - created by Paul Templier in Paris at the turn of the twentieth century. 2 natural pearls and ten triangular diamonds, weighing between 5-6ct are set in platinum, in a fairly unique Edwardian setting. The most fascinating part of this exhibit is the use of triangular hand cut diamonds, the shape of which were rarely ever seen to exist before modern diamond cutting techniques evolved. Templier was a specialist in gem set jewellery, and became the president of Paris’ Chambre Syndicale for jewellery. 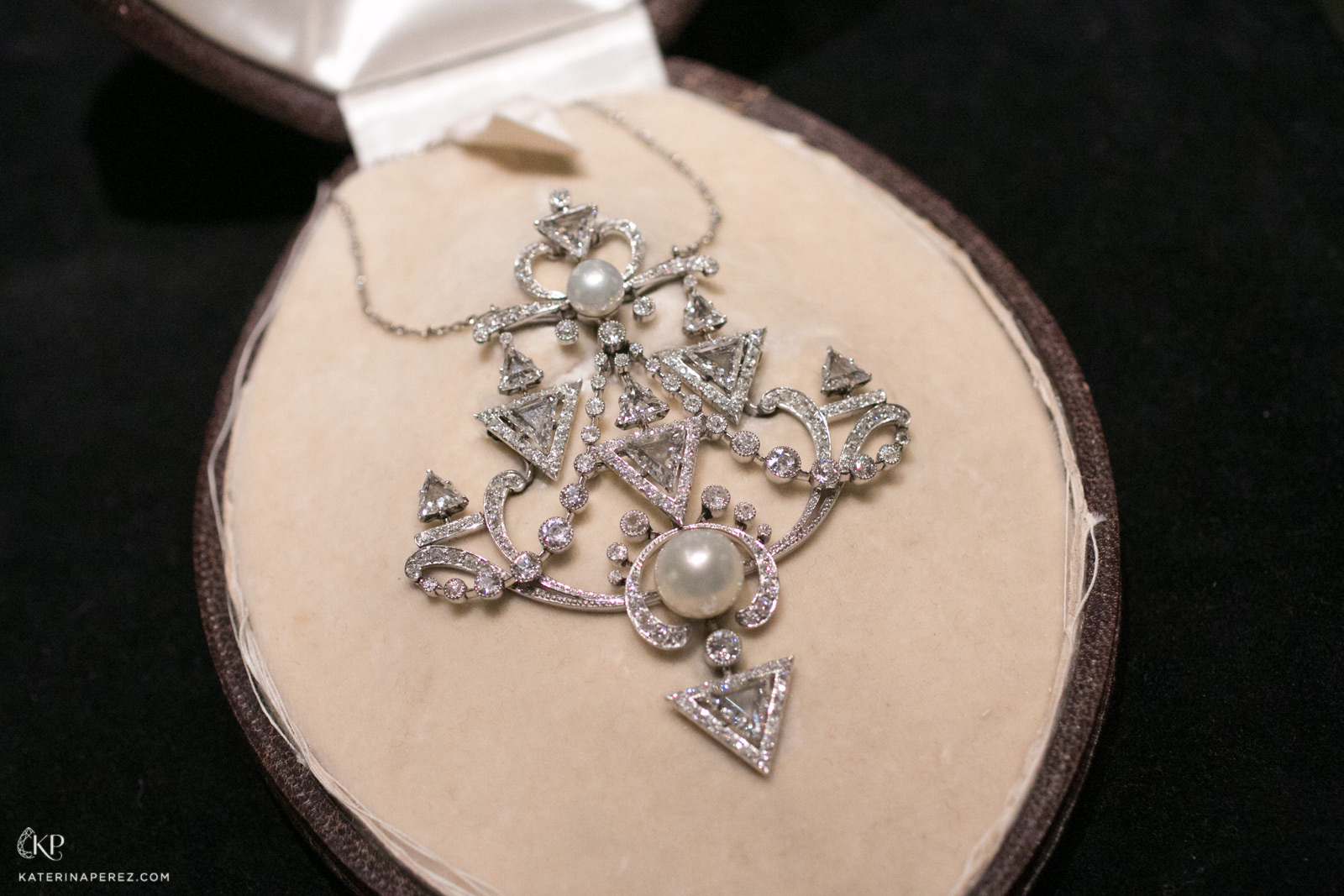 Van Cleef & Arpels presented an enchanting ‘Op’Art’ bracelet which hides an intriguing secret, an optical illusion. Bedecked with 67 sapphires, 1700 diamonds and turquoise beads, the 18k gold setting is completely articulated, meaning that the bracelet’s appearance transforms when worn, revealing the turquoise beads underneath the sapphires and diamonds. When laid flat, the bracelet looks to comprise of only interlocking circles of diamond and sapphire. The complex mechanics of the bracelet took 10 craftspeople – the brand’s ‘Mains d’Or’ - over 500 hours to create, and in doing so they ensured that the bracelet comes alive when worn and captures the dynamic excitement of fine jewellery. 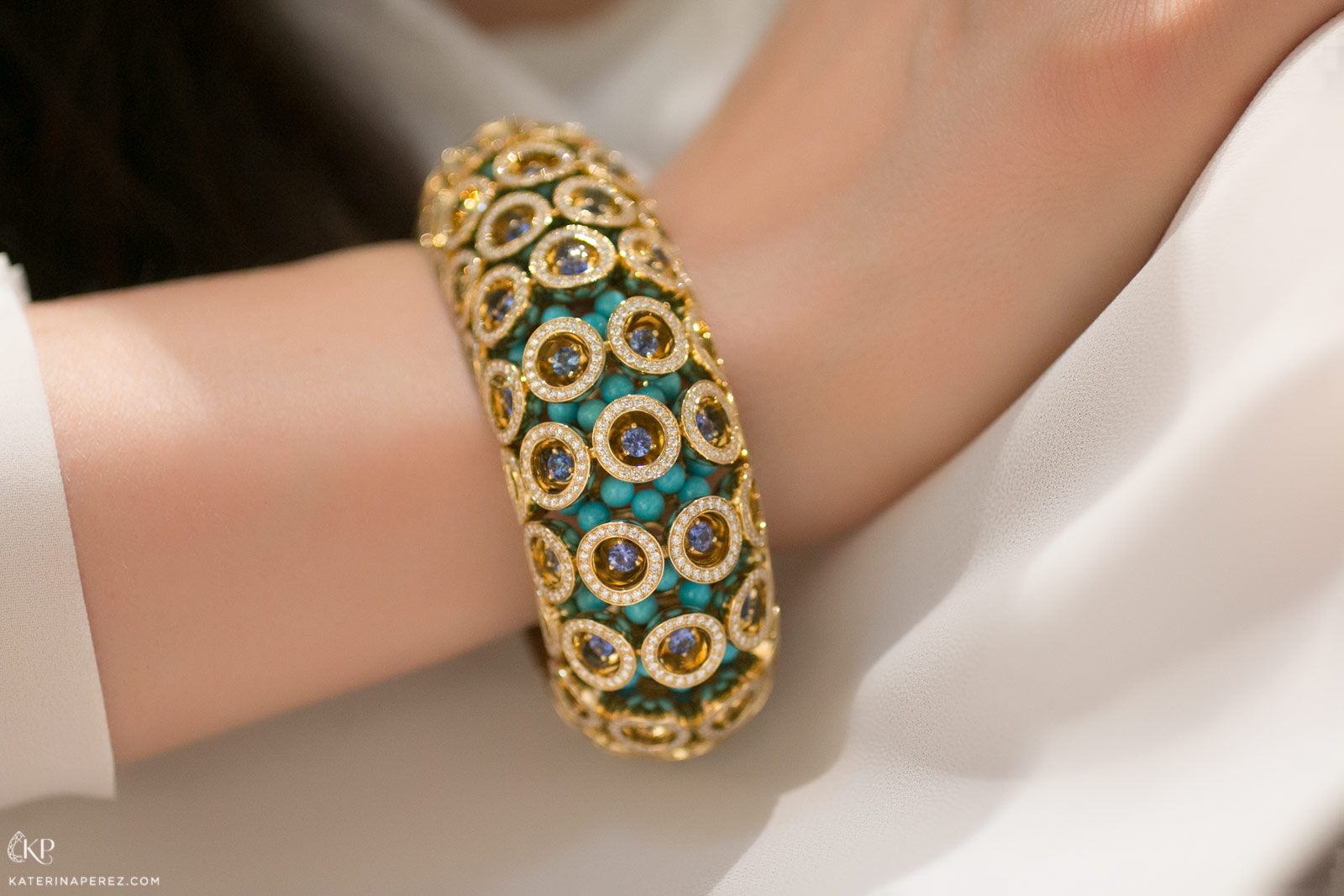 The audacious design of this necklace by Sabba that I came across at Symbolic and Chase caught my attention with its contemporary interpretation of the amethysts and coral. The lack of traditional setting and the abundance of large, uninhibited gemstones is reminiscent of post-modern art and design, and seems inspired by the Memphis collective, whilst remaining a true work of art within the fine jewellery world. This piece was created with those who appreciate details in jewellery and craftsmanship, as on close inspection, the large, faceted coral beads are endowed with a pave set diamond disc to either side. 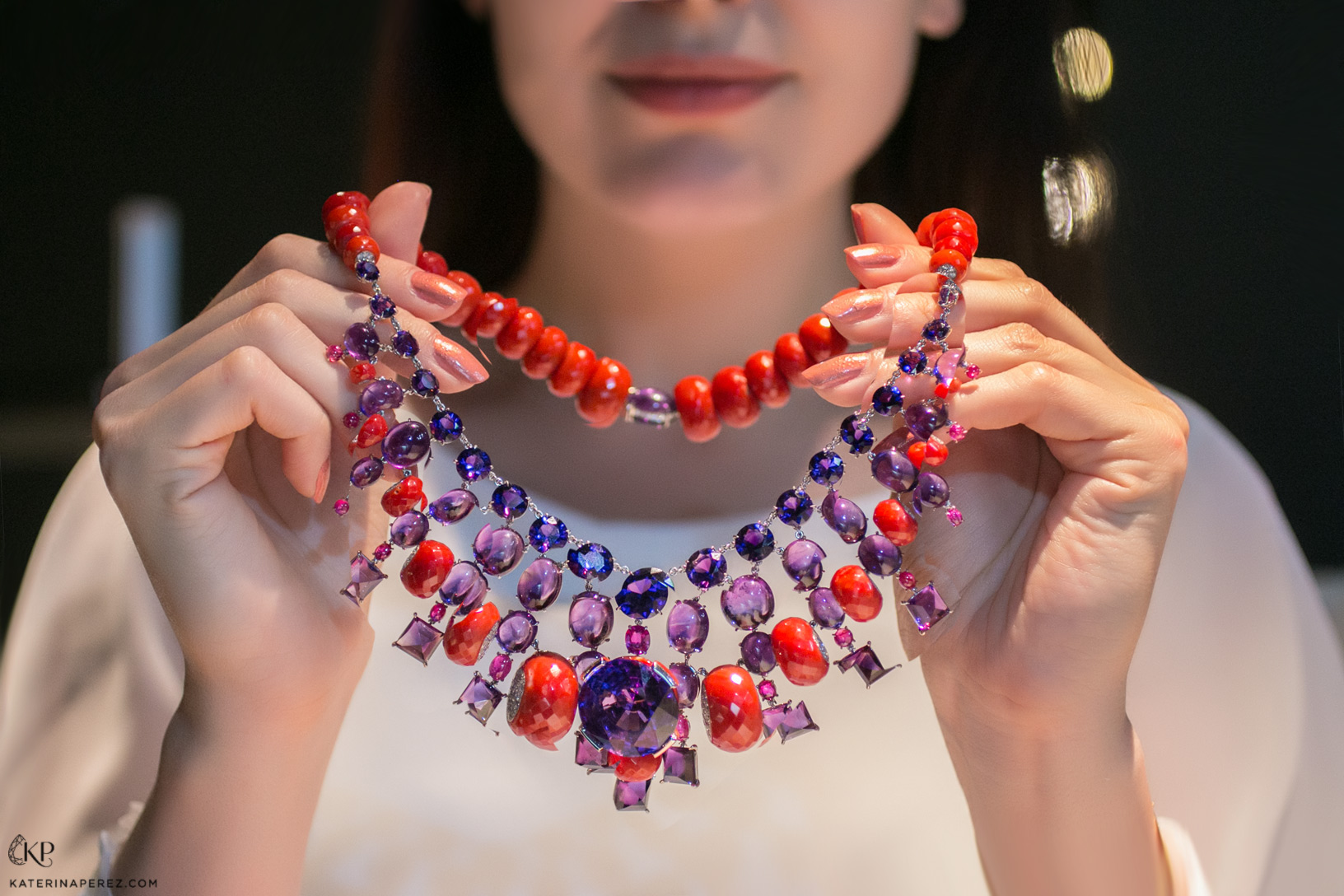 Hemmerle prepared an impressive number of new pieces for the Masterpiece fair, but I chose to feature a jewel from the jeweller’s archive. It is a majestic parrot that belongs to Art of Nature series. They include one-of-a-kind jewels inspired by the enchanting world of flora and fauna: spiders, birds and flowers. The parrot is studded with diamonds, rubies and moonstones that decorate his feathers. It grasps the most impressive stone of all - an old mine brilliant cut diamond. The form of the bird is so lovingly and precisely recreated, that he charmed me, and many of the other visitors of Hemmerle salon! 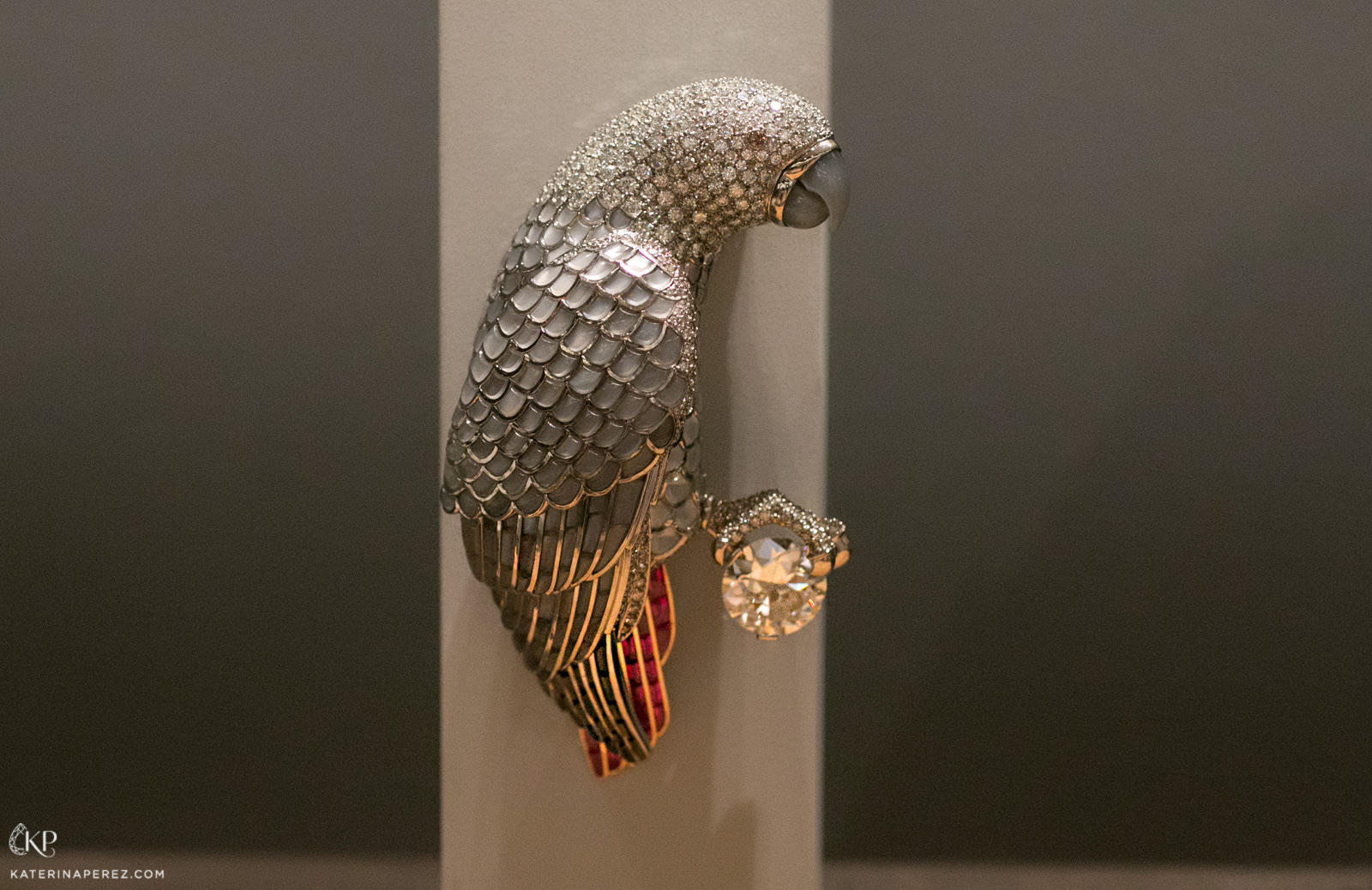 Hancocks diamond crossover ring - which was created by by Amy Burton, Hancocks resident jewellery designer - features two central diamonds, each weighing just over 20ct, which is exceptional enough in itself! The quality of the match between the diamonds, along with the extraordinary cut of each stone, elevates this ring above others. Both old mine diamonds are cut from the same piece of rough – meaning that Hancocks can lay claim to having the jewel which features the best quality of diamond match in the world. 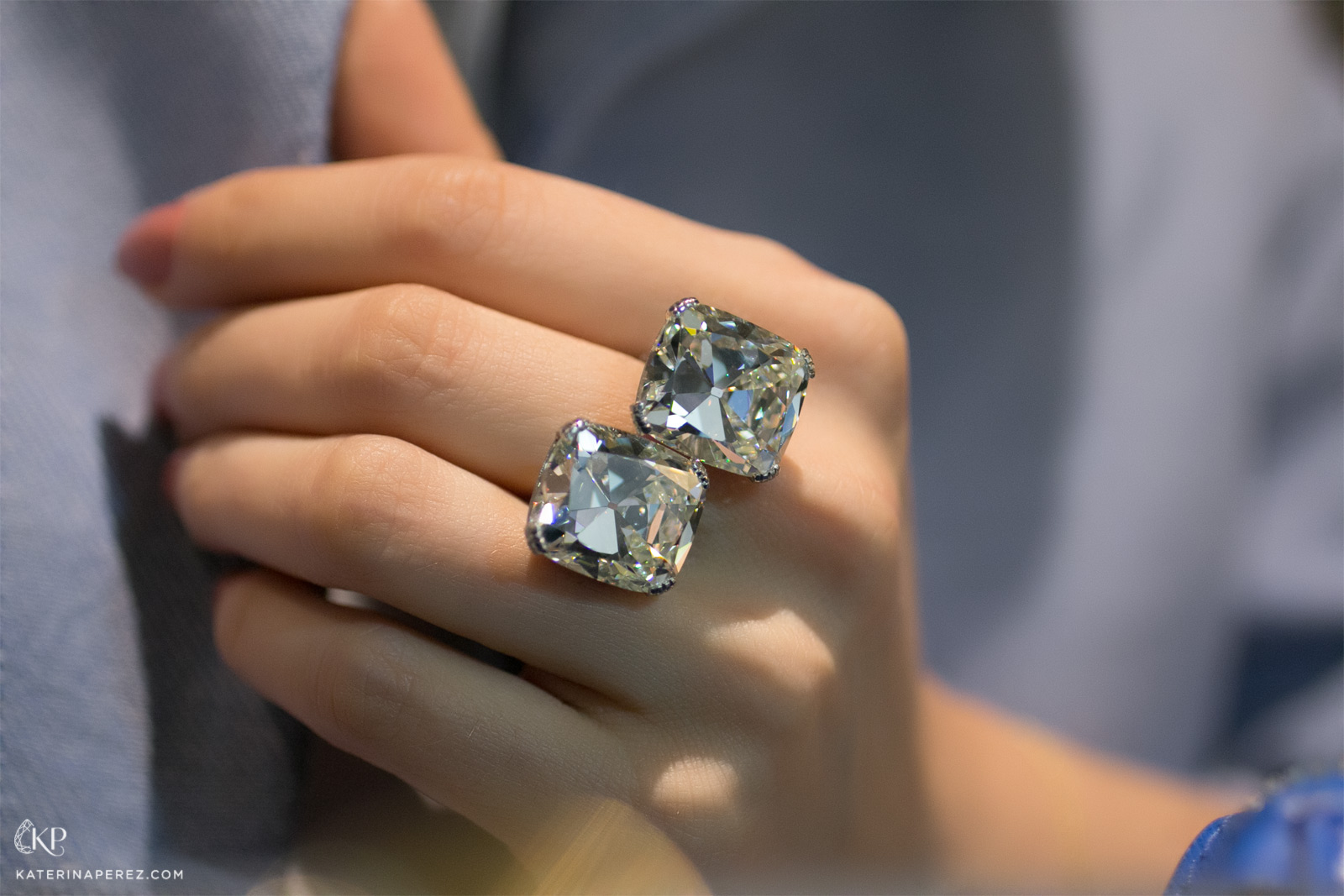 Theo Fennell’s charming ode to artists was presented in the form of this Artist’s Palette brooch, featuring a 44.32ct Australian black opal at its centre. The central stone is surrounded by tsavorites and multi-coloured sapphires in a graduating spectrum of colour to reflect the flashes of light in the opal. I adored the witty use of the central stone to mimic the paint swathes across the palette. 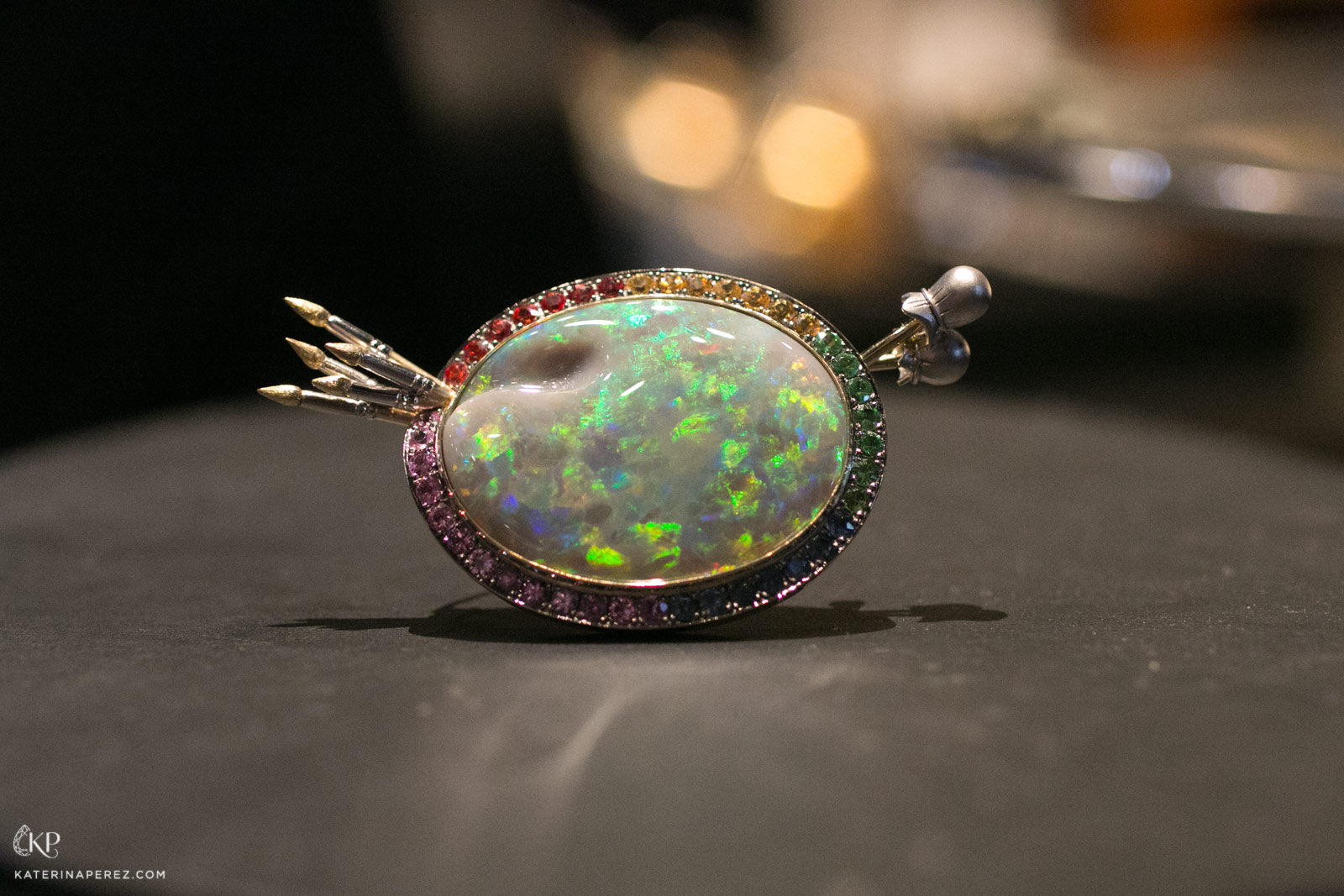 Masterpiece is always an inspiring an enchanting showcase of the best and most interesting pieces that the jewellery world has to offer. From exceptional craftsmanship, to the highest quality gemstones, and the most ingenious use of materials to create a work of art, Masterpiece and the jewels that are shown there never cease to amaze me.