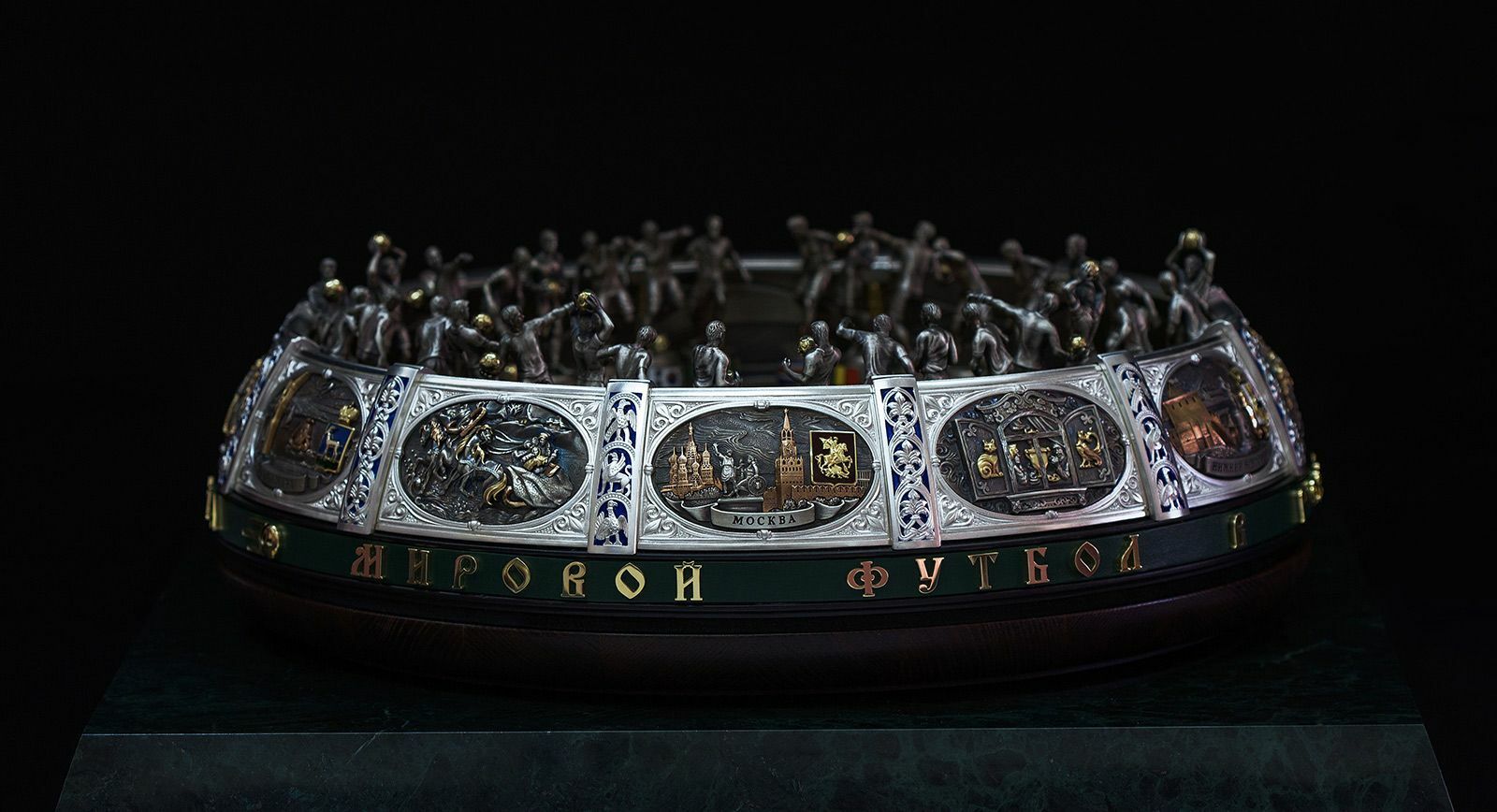 Stadium 13: Ode to the 21st World Cup from MYAGKOV and Mark Kremer collection

MYAGKOV jewellery has high artistic value: young and experienced designers alike work side by side in the studio, and their singular approach allows the brand to create jewellery of the highest quality with an innovative vision ever-present in the design. The principal motto of MYAGKOV is to be open to the world and to new ideas – this has aided in the conceptionof the unique art object ‘Stadium 13’: created in honour of the 2018 World Cup.

The idea behind creating this jewelled art object belongs to a private client Aleksandr Kremer, owner of the unique Mark Kremer collection, named after his son. Aleksandr decided to combine his passion for sports – especially football – with his desire to start a private collection of jewellery. Arriving at the MYAGKOV studio with these thoughts in mind, he was pleasantly surprised: the idea was greeted with enthusiasm and developed! Over the course of lengthy discussions, the decision to launch this jewellery creation at the same time as the 2018 World Cup emerged – the competition will be held in 11 Russian cities from 14th June until 1st July – making the theme of this high art creation accessible to all. 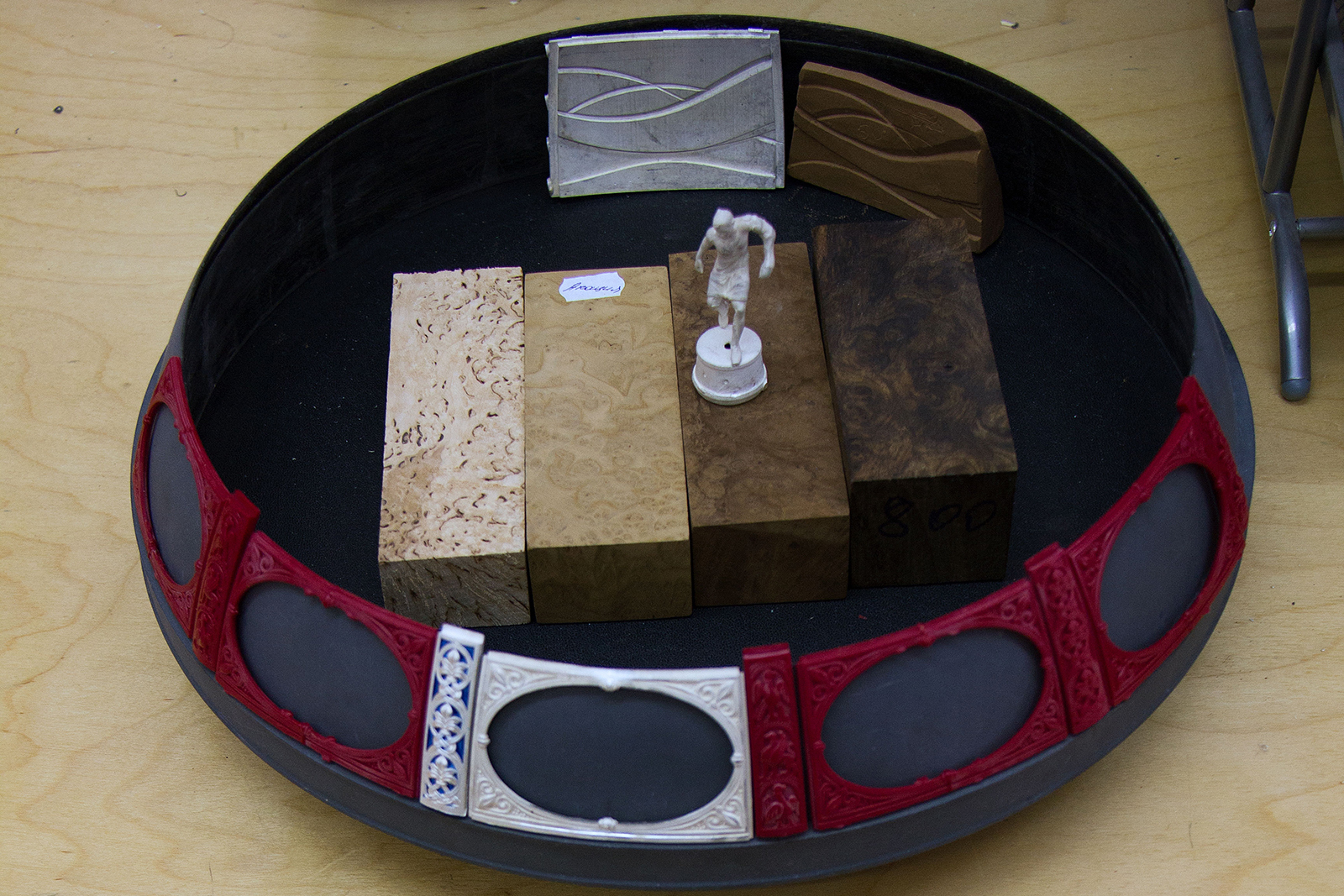 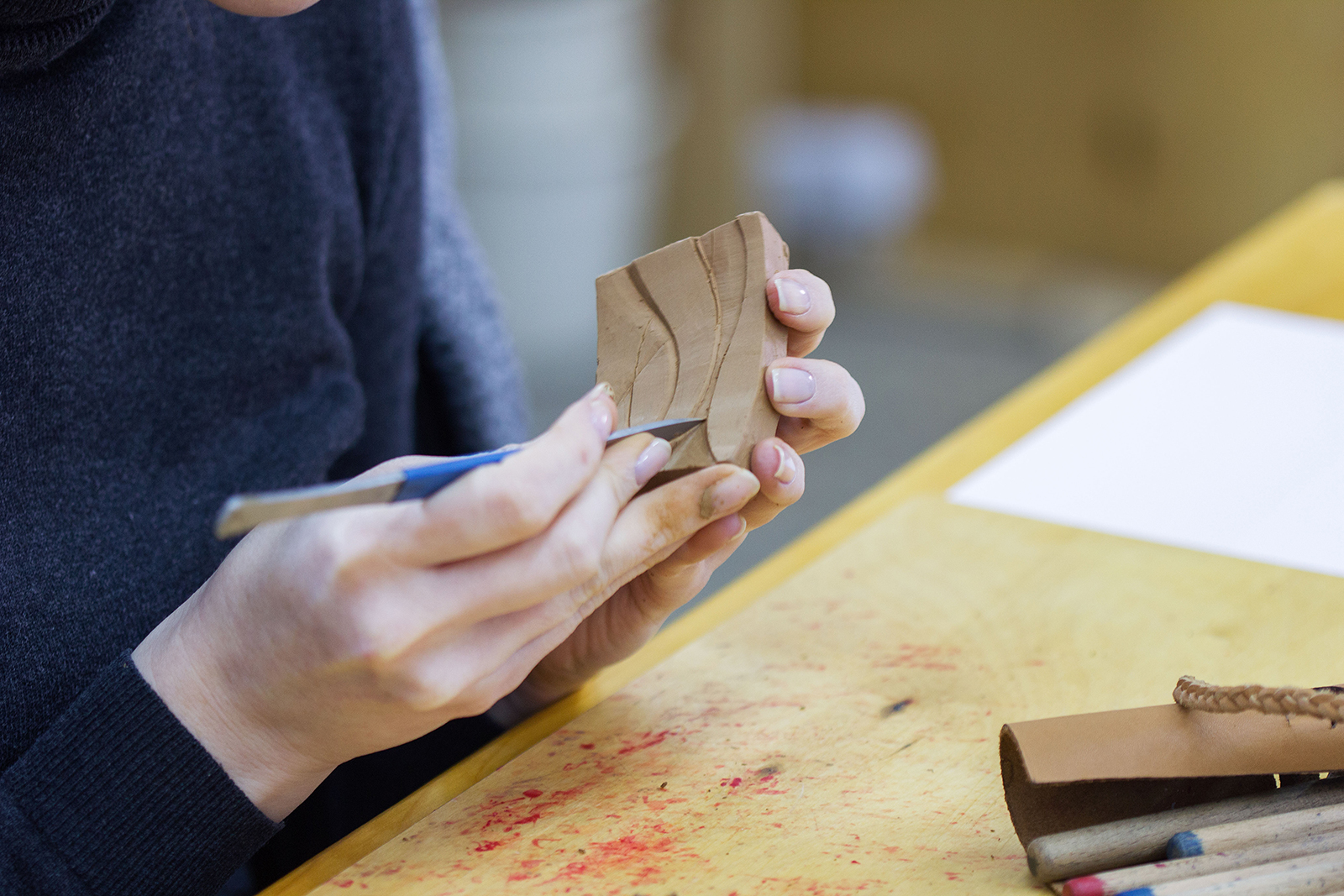 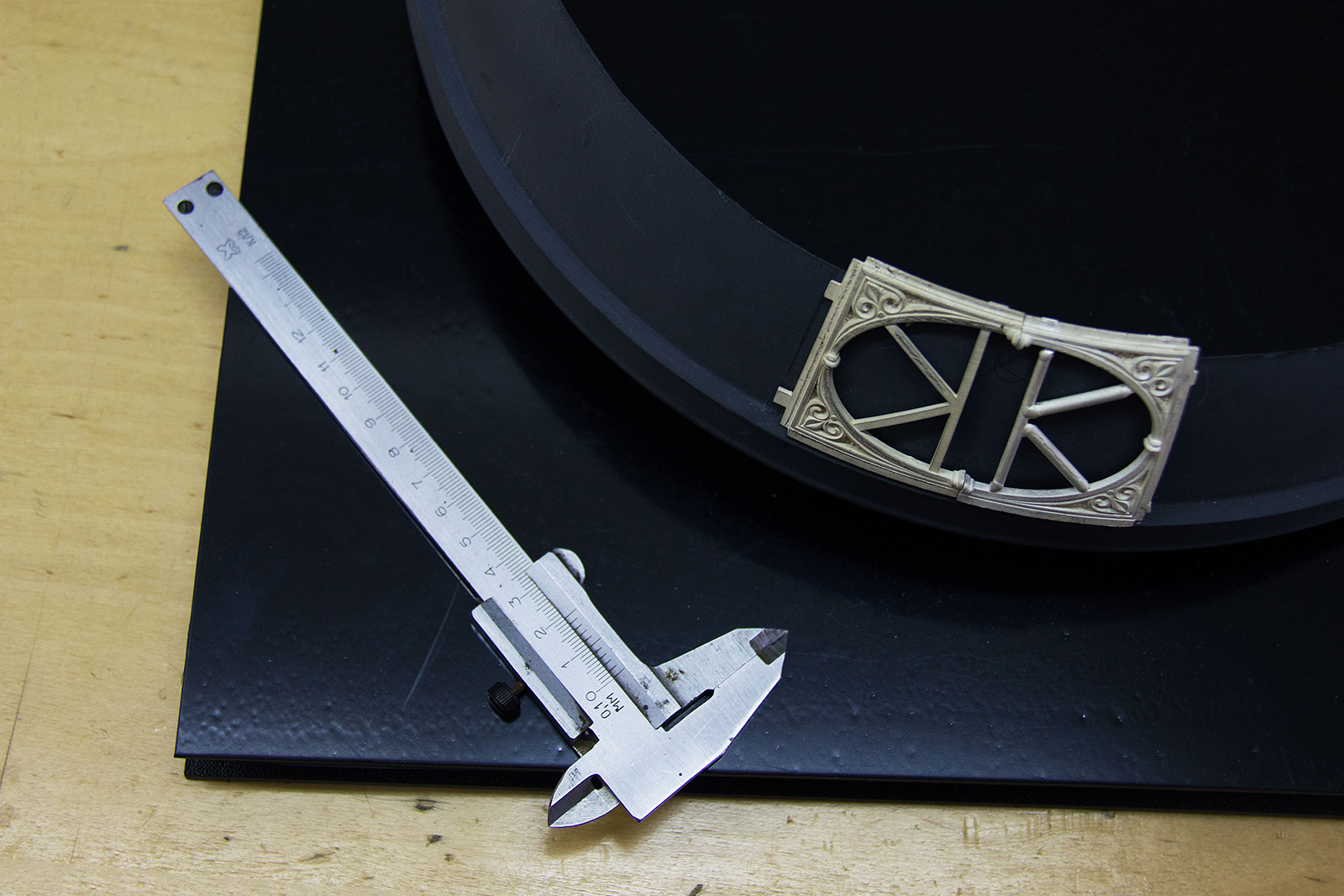 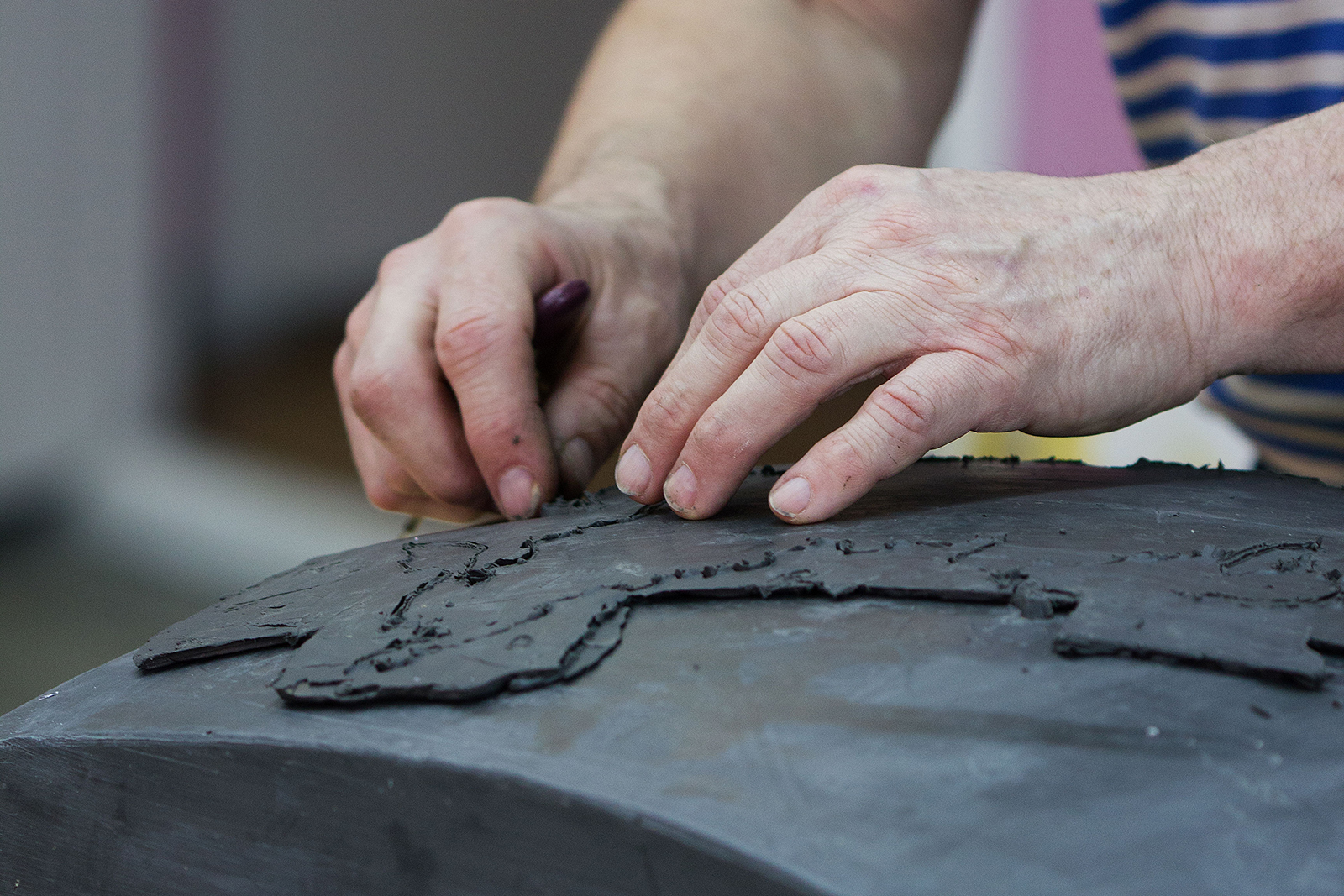 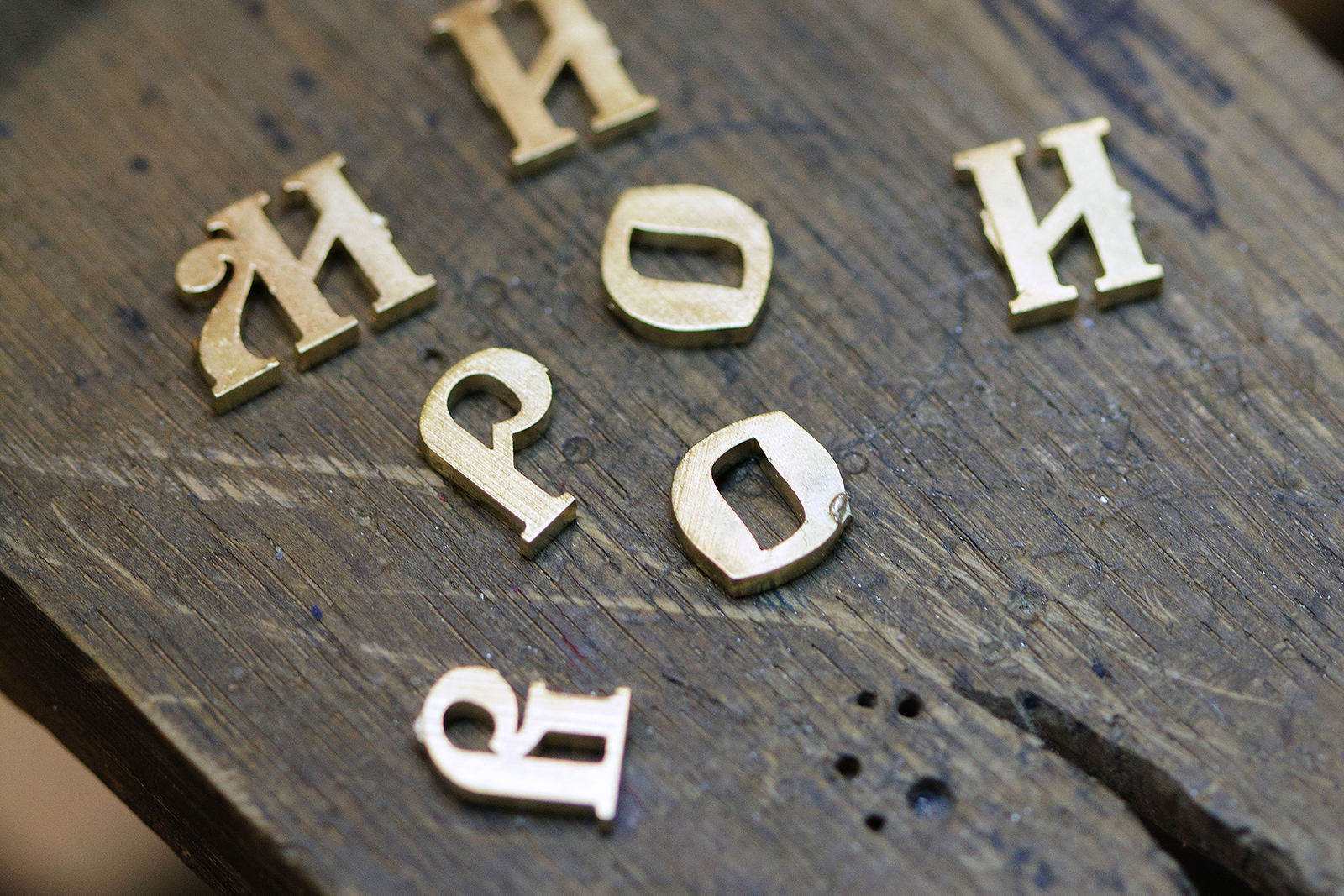 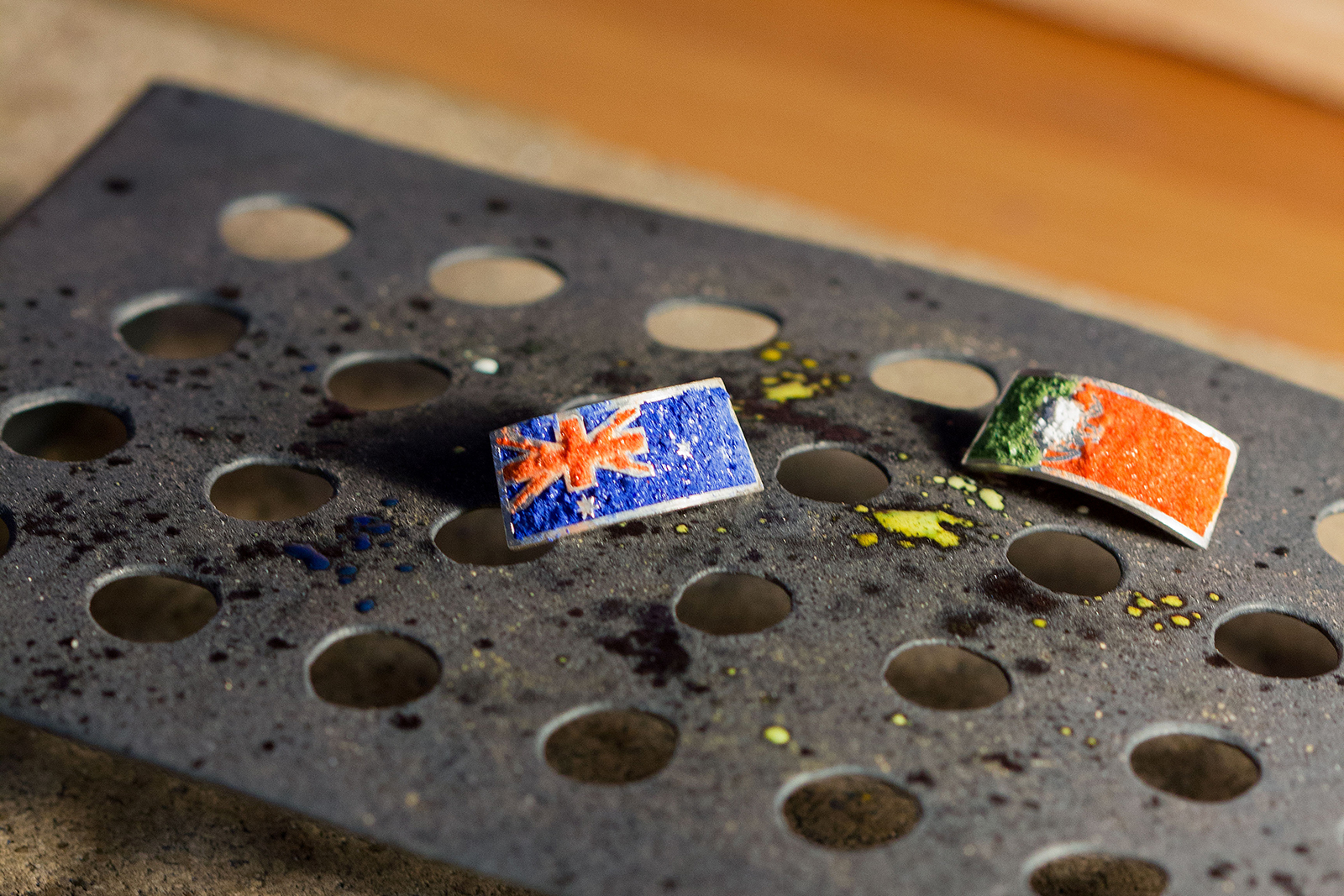 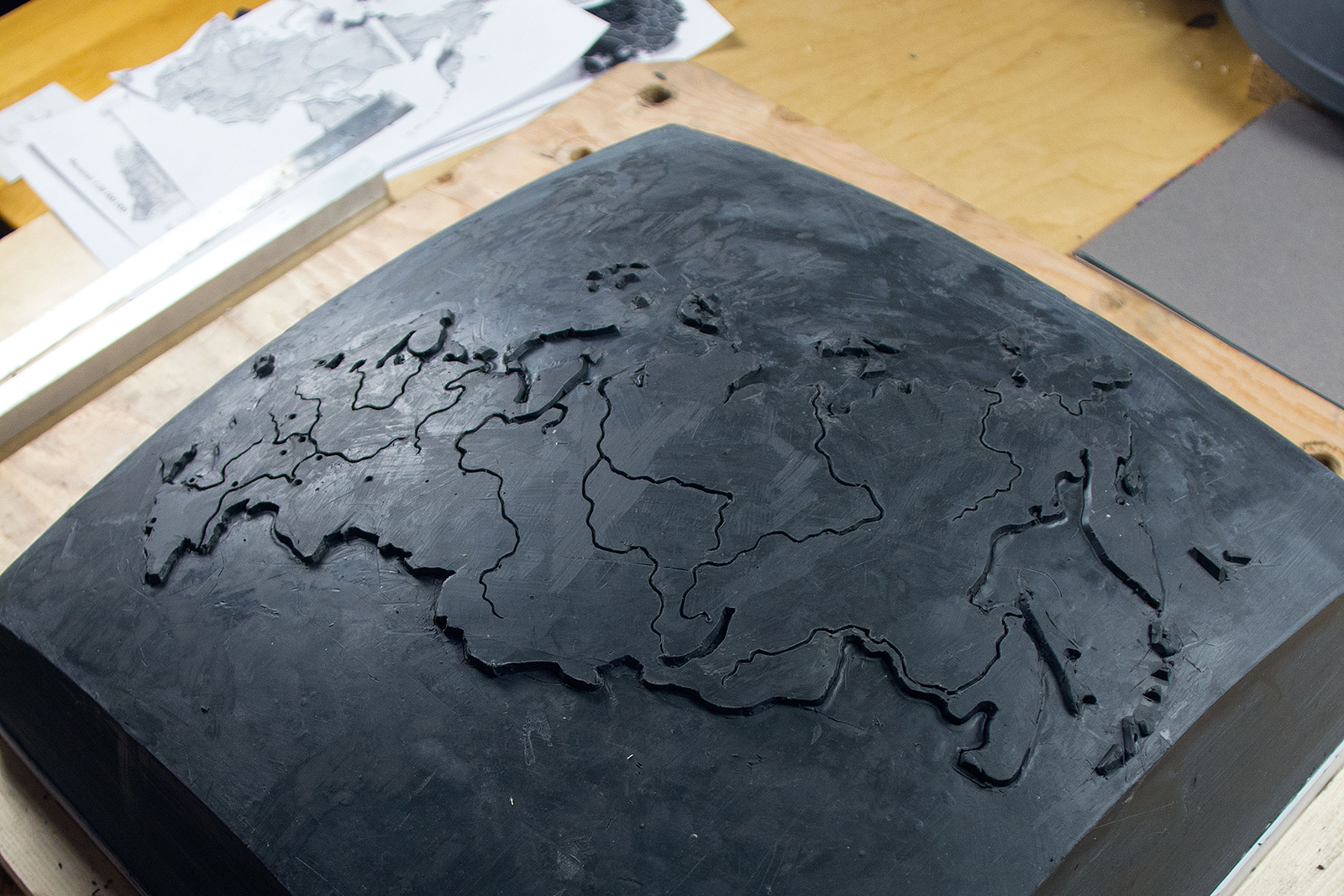 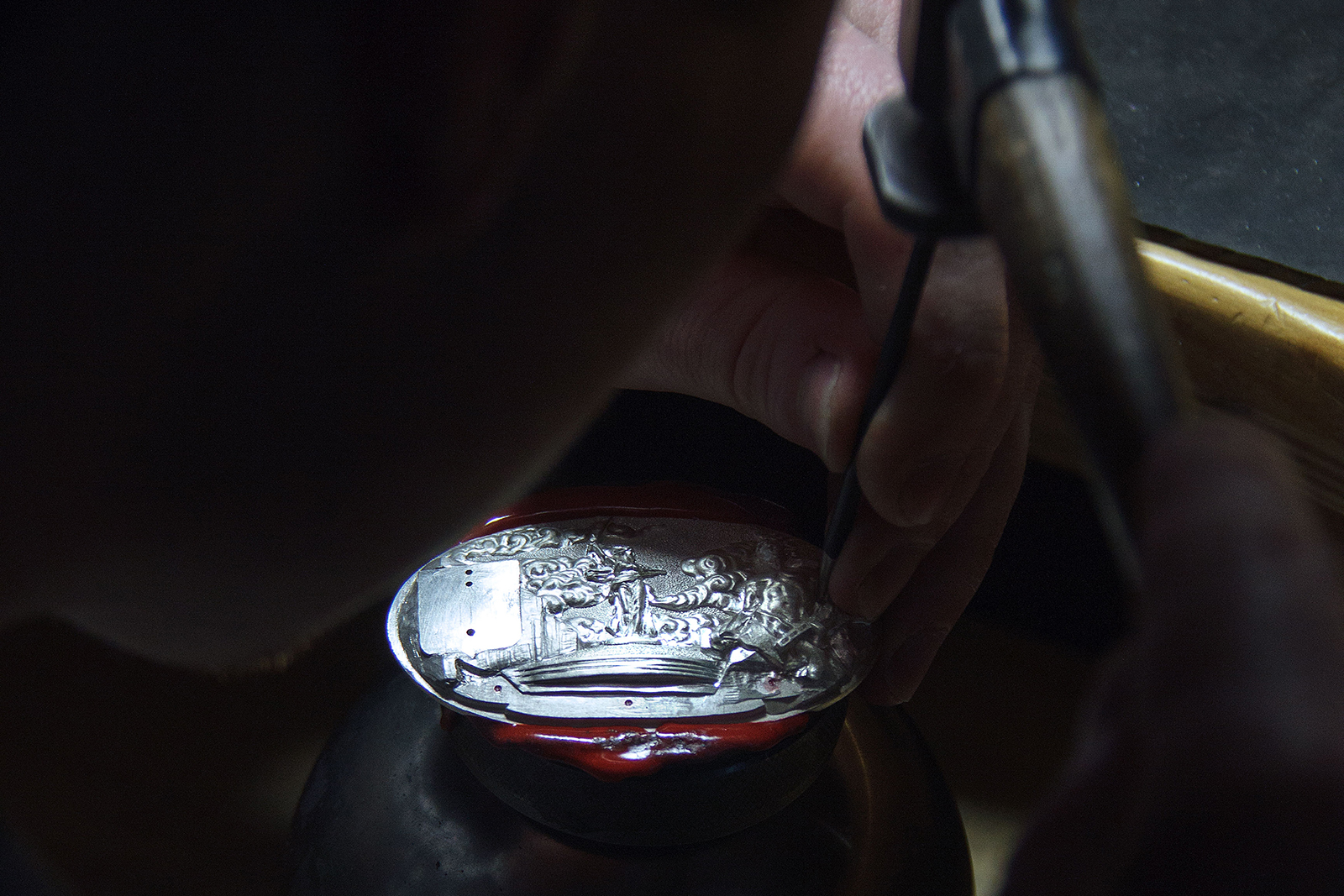 “Hosting the 2018 World Cup in Russia is a unique event unlikely to take place again the coming decades. Therefore, we felt a desire to capture the moment not just in a memory, but in an art object of silver, gold, hot enamel, leather, and the barks of birch, acacia, walnut and maple – an object as unique as the event itself,” says Alexander Kremer, founder of Mark Kremer collection. 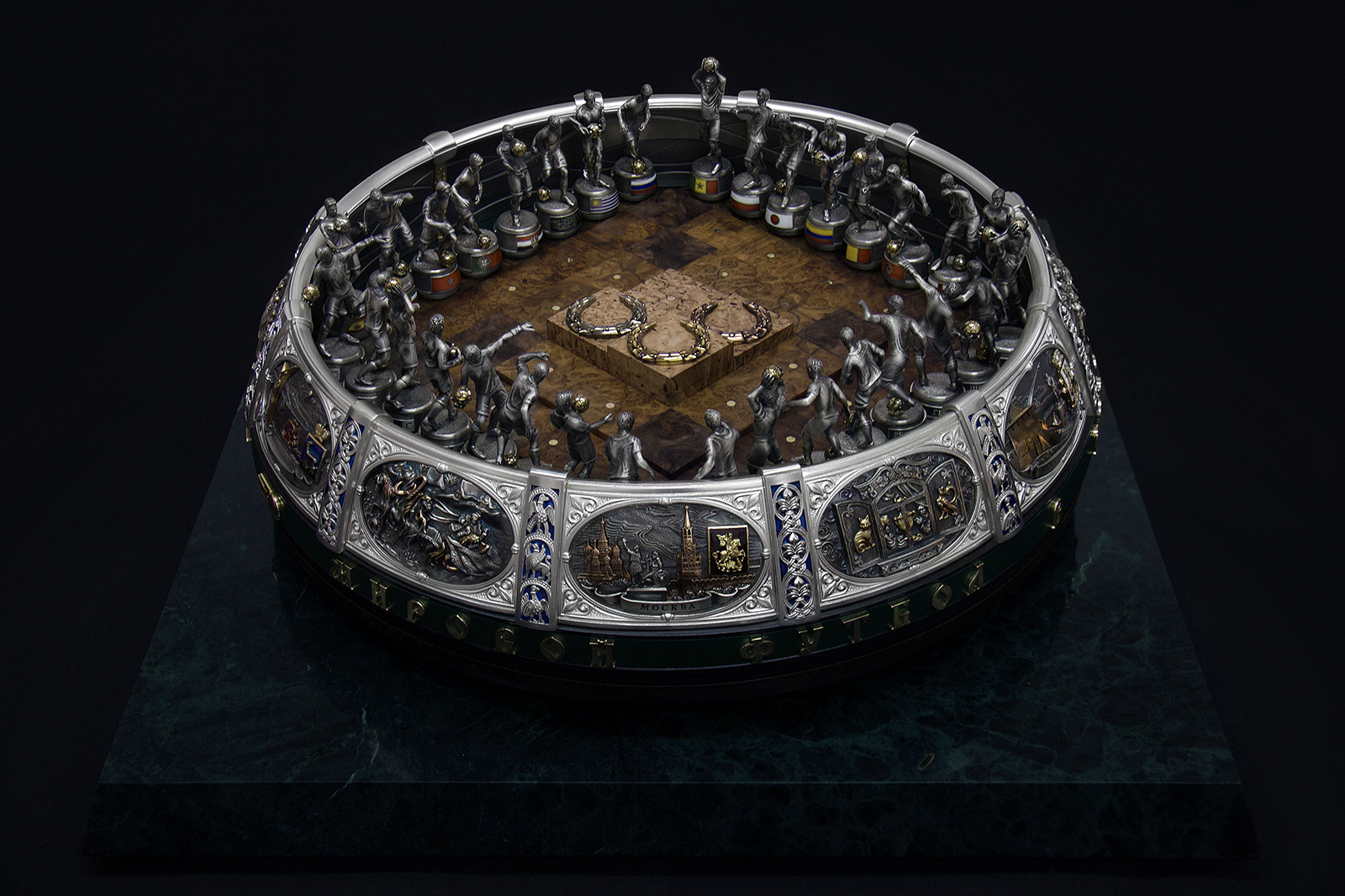 Assigned the task of manifesting this idea into a reality was a team of 12 craftsmen, each equipped with various skills: jewellers, designers, artisans, and more. The first sketches were created on 1st January 2018, and here is where this colossal body of work commenced. This short time frame meant that the project initially started at an accelerated speed, that was maintained right until the final flourish.“All the work was done holding our breath, and mistakes simply weren’t an option,” recalls Grigory. 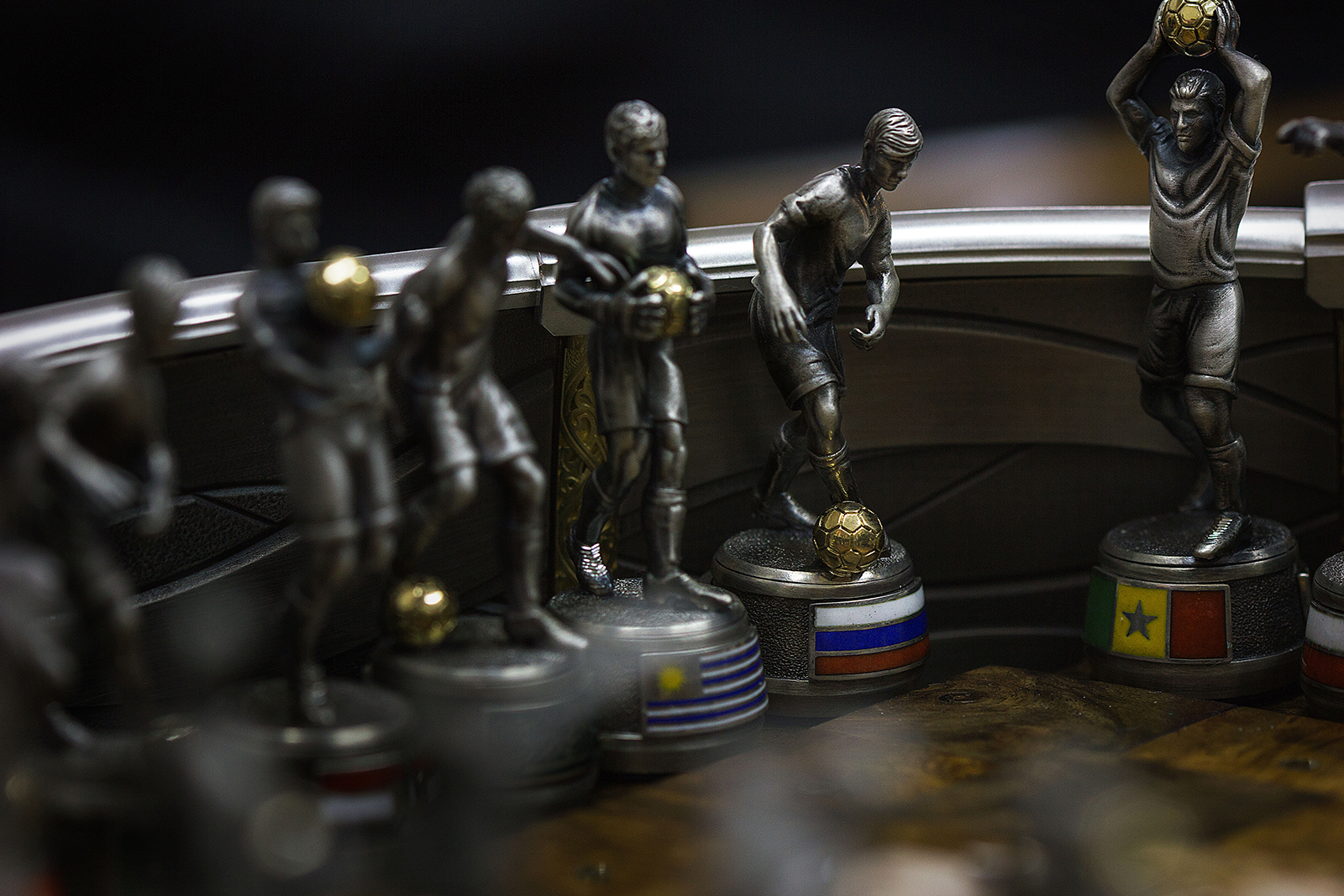 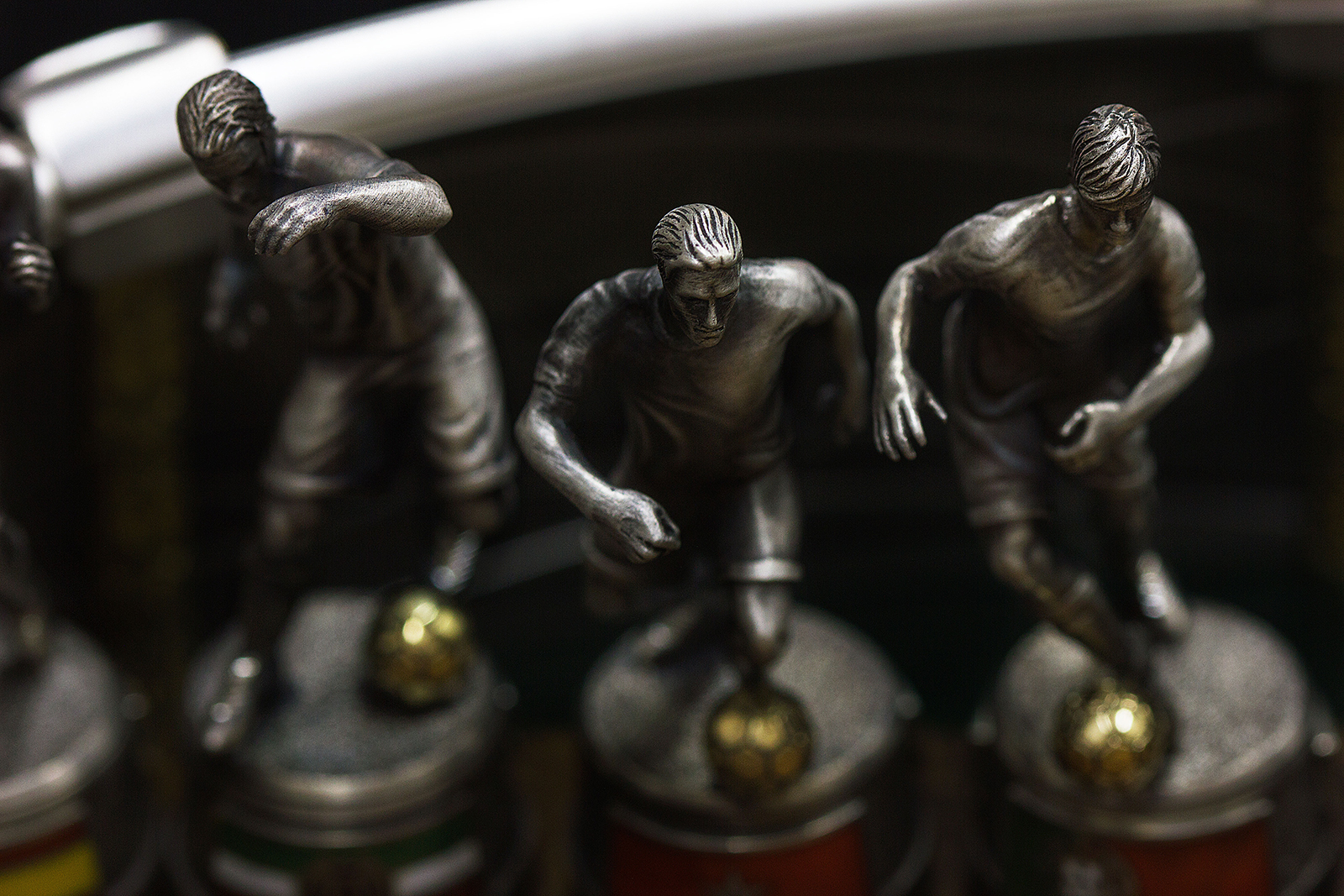 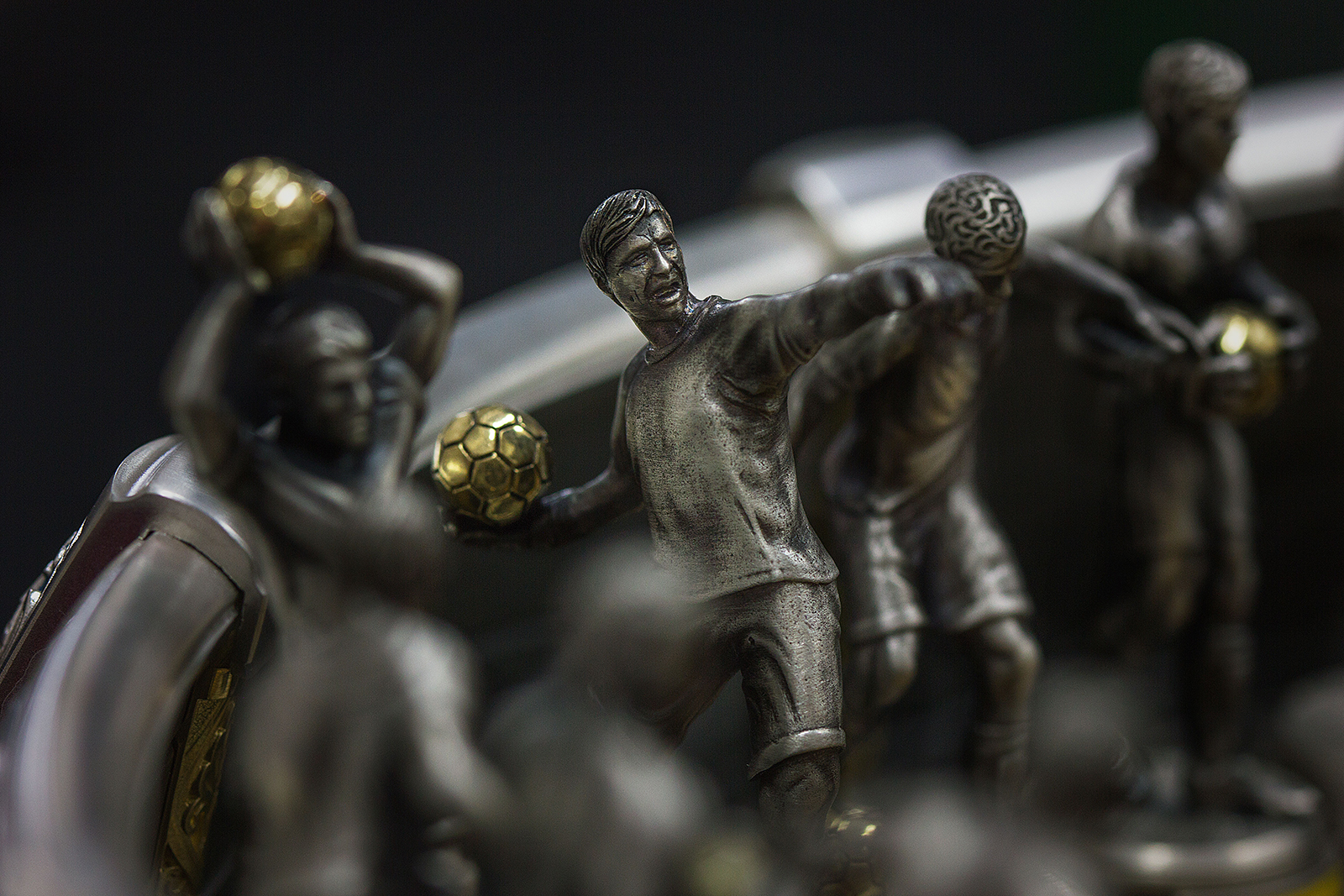 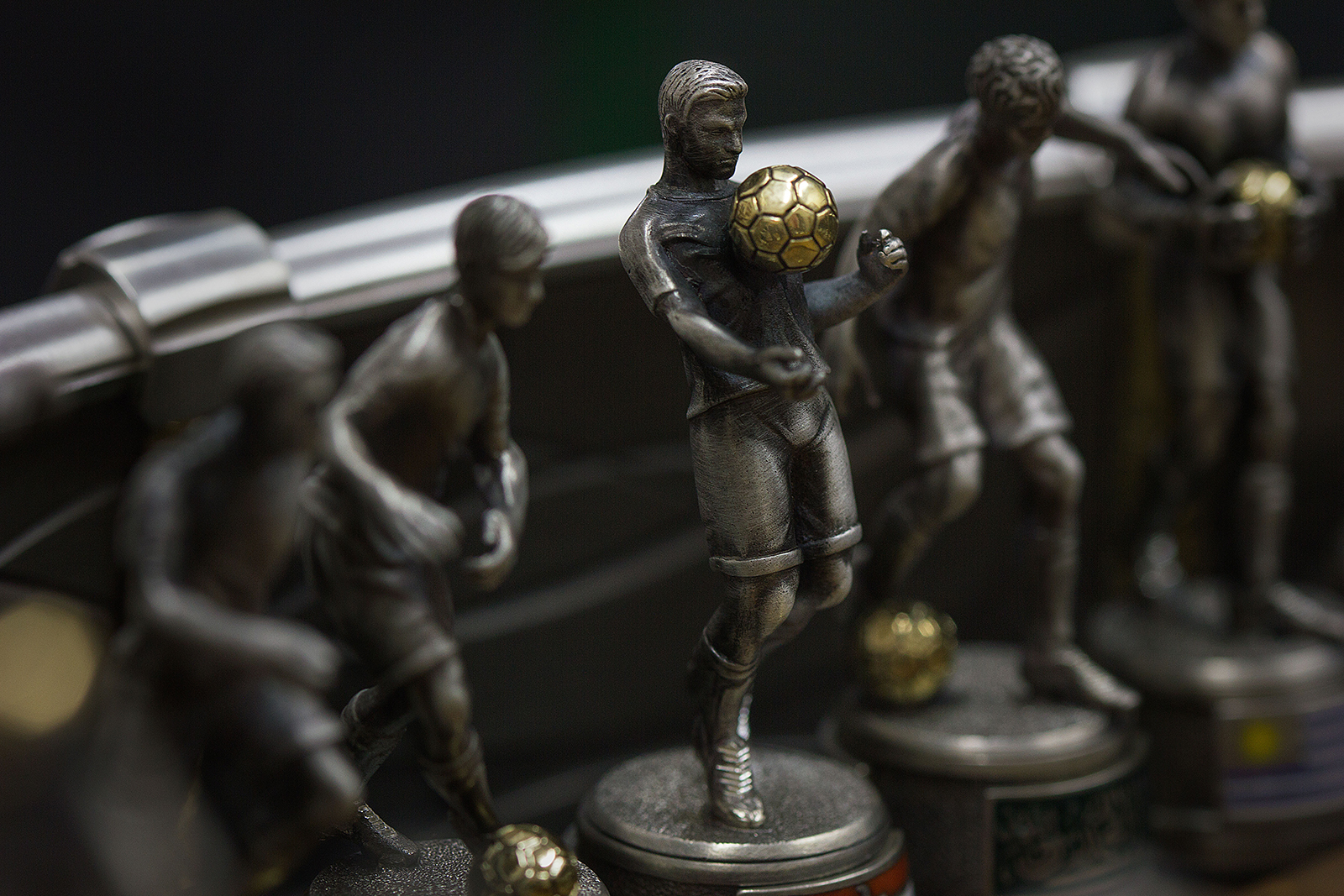 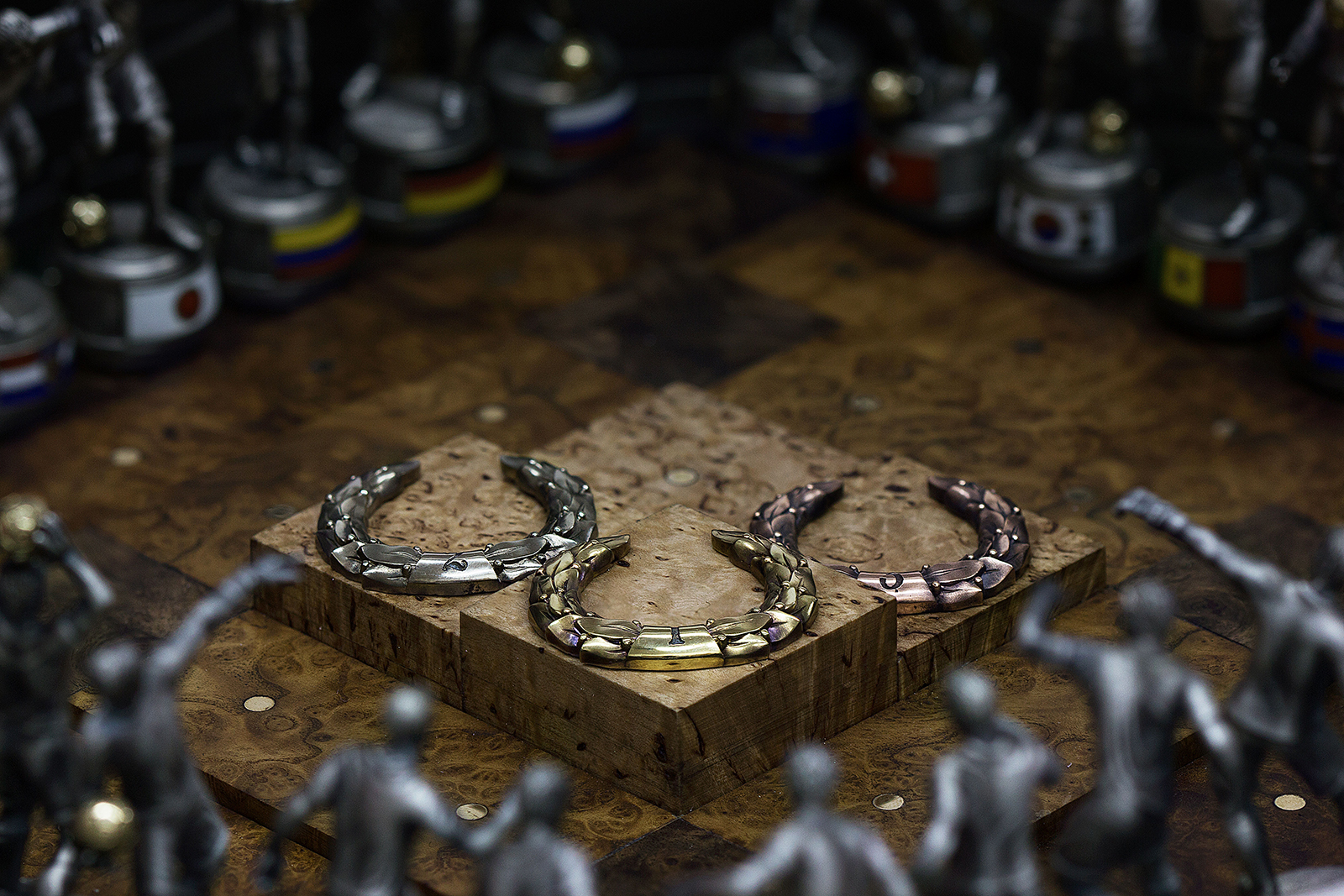 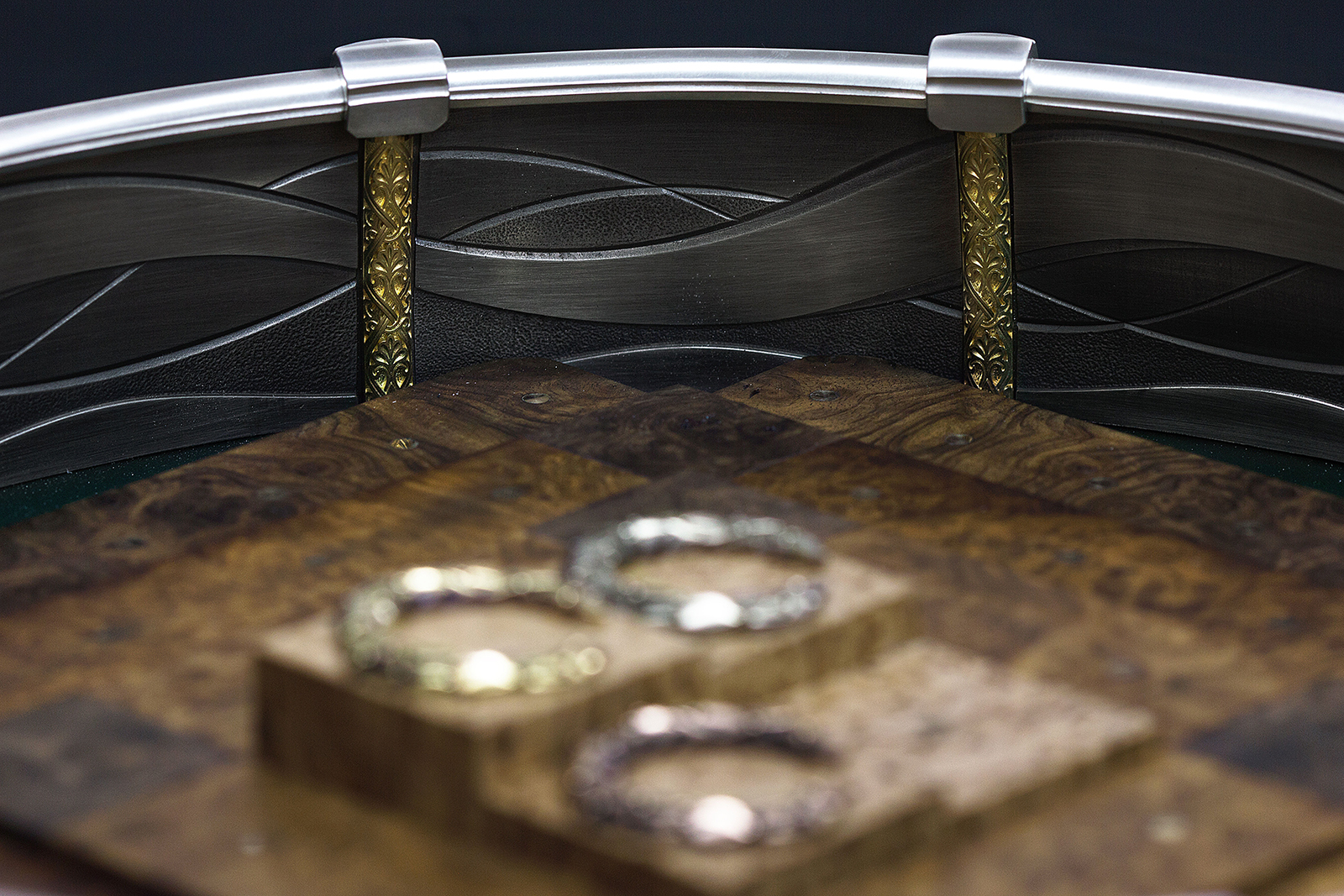 The 2018 World Cup will be played in 12 stadiums, so the collectively made jewellery object was named ‘Stadium 13’. In its centre, there are 32 players in one of eight poses with their flag above them and the name of their country – a representation of each of the 31 teams participating in the competition. Each of them takes his place according to his starting position in the standings, so each player is in one of the 8 possible positions to begin the match. In line with to the results of each match, the position on the field will change interactively: the winners will move forward, until the champion emerges. 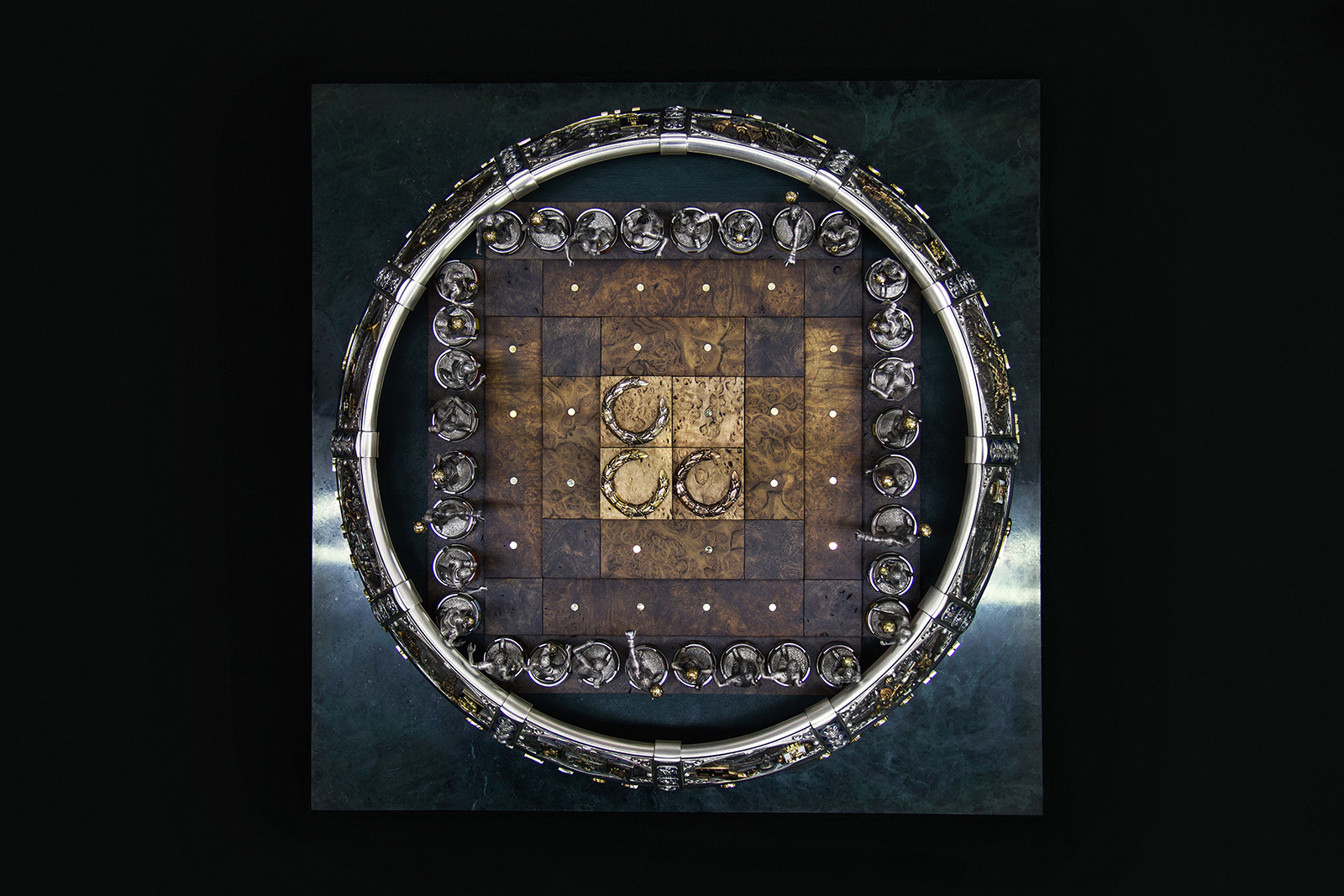 The walls of the stadium are not dedicated to the game itself, but to its host country – Russia. Of course, it proved impossible to set out the entire rich history of the nation on the walls of the jewelled object, so a discussion took place to decide what was depicted here, which turned out to be very long and very emotional. The result: 12 images to include the two capitals Moscow and St Petersburg; 4 megacities located on the banks of the Volga – Samara, Kazan, Nizhny Novgorod, Volgograd; 6 original ethnic Russian fairytale motifs – the Troika (three-horse sled), Platbands (decorative wooden carved frame), Lukomorye (a fictional land of Russian folklore), Kizhi Pogost (17th-century historical site recognised by UNESCO), Khovorod (traditional circle dance with choral singing), and the Three Bogatyrs (an animated franchise following 3 medieval heroes). The frame of the columns outlining these 12 themes is based on the white stone carvings on the Dmitrievsky Cathedral in Vladimir, built over 800 years ago, and it symbolises Russia’s ancient traditions and history. 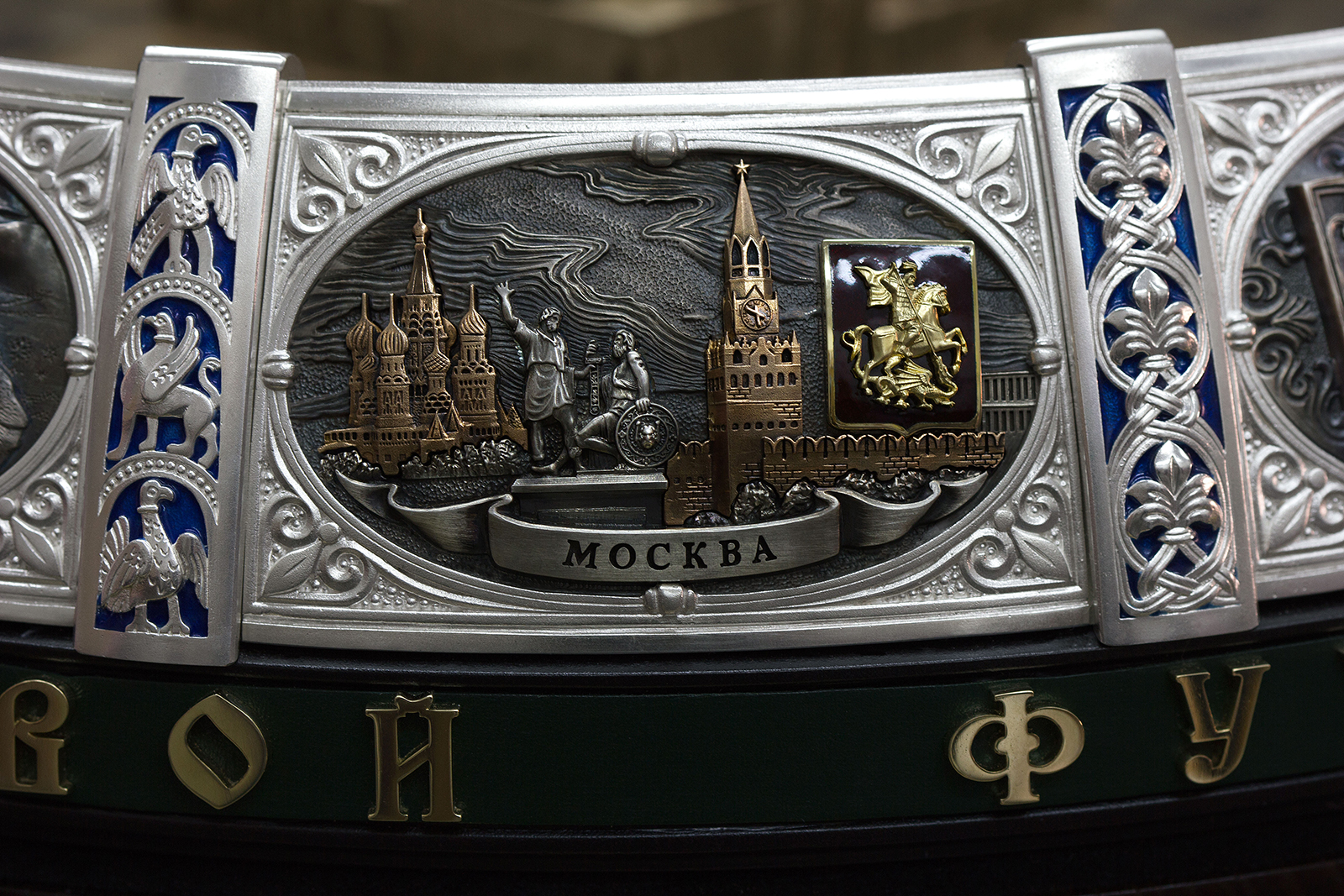 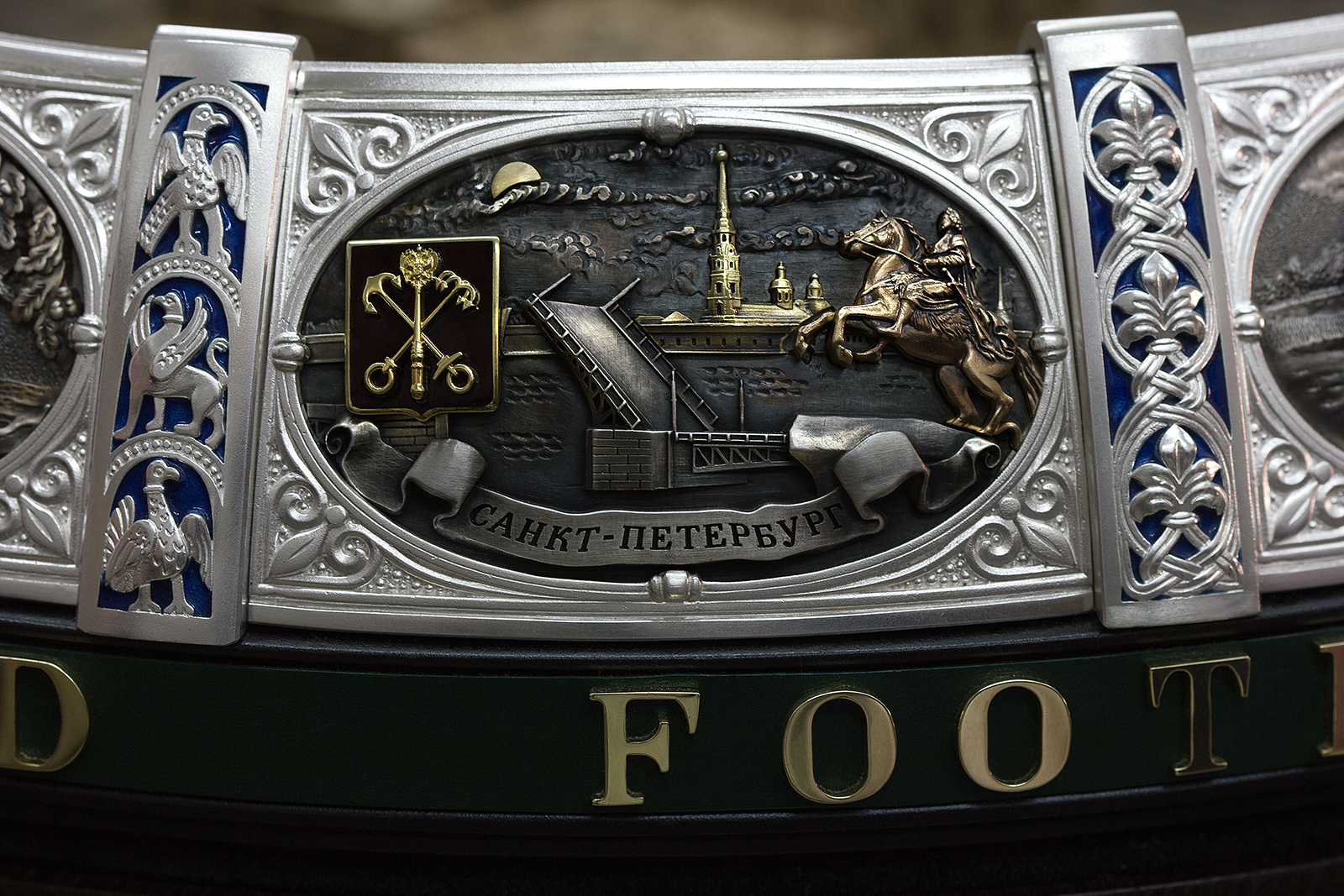 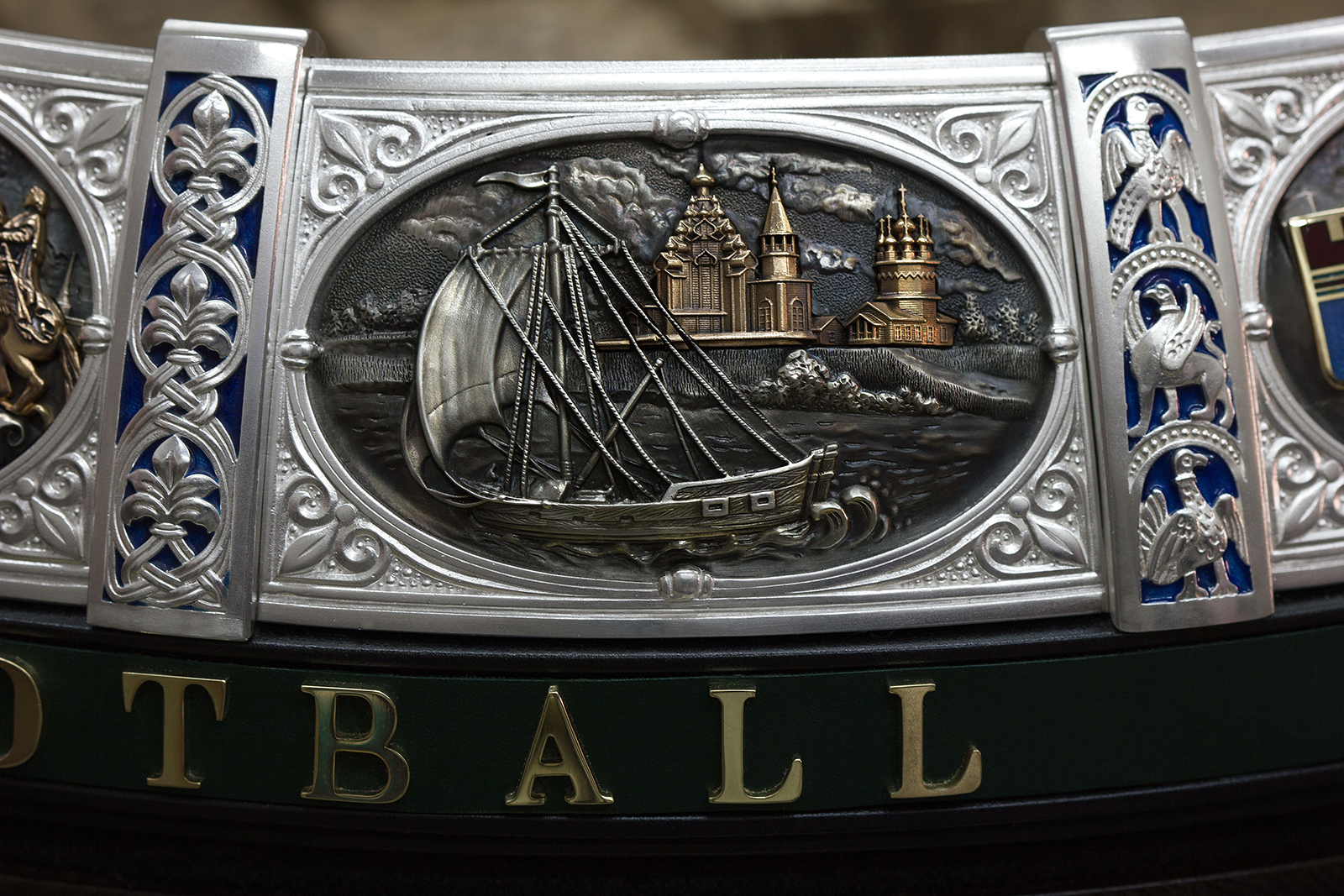 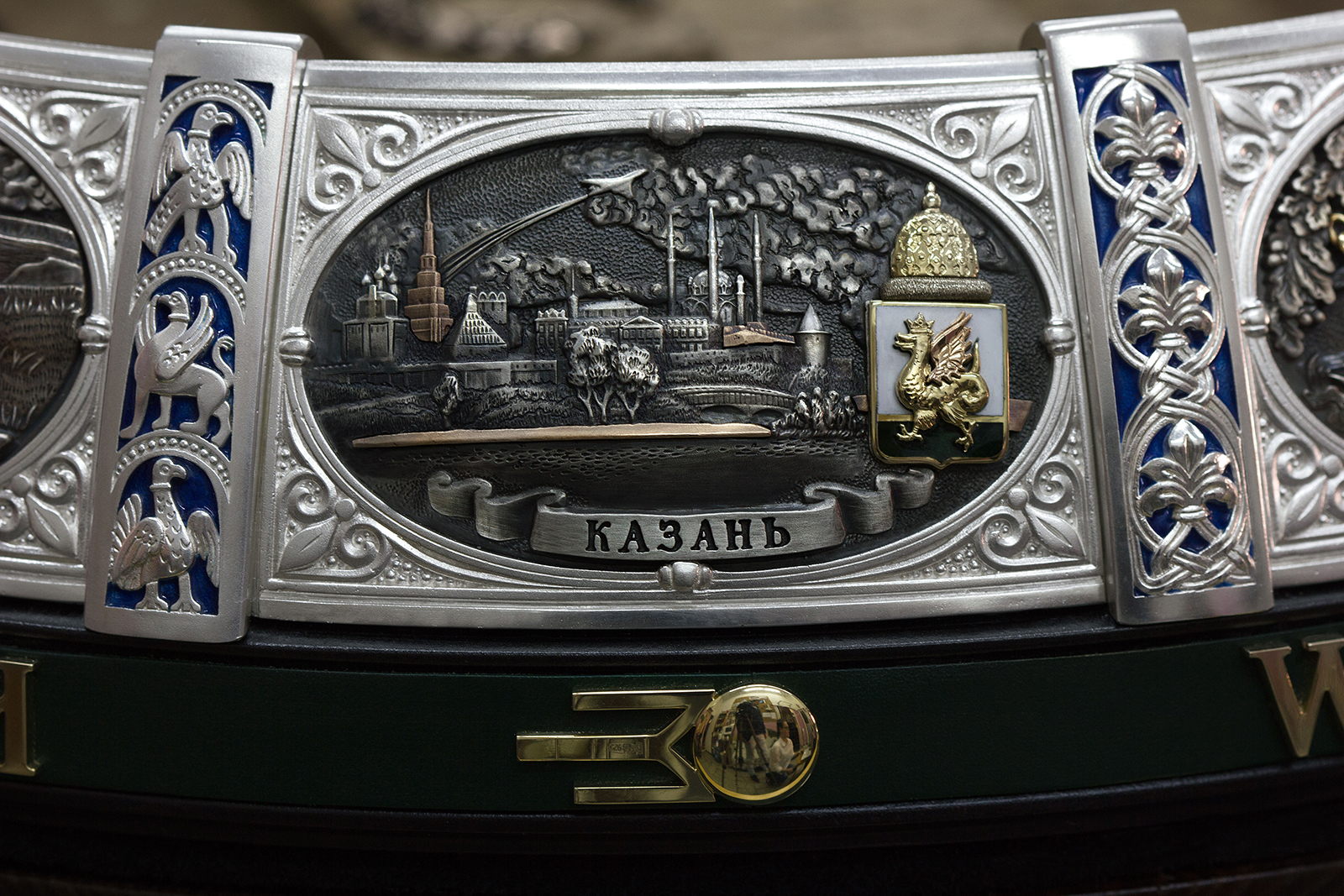 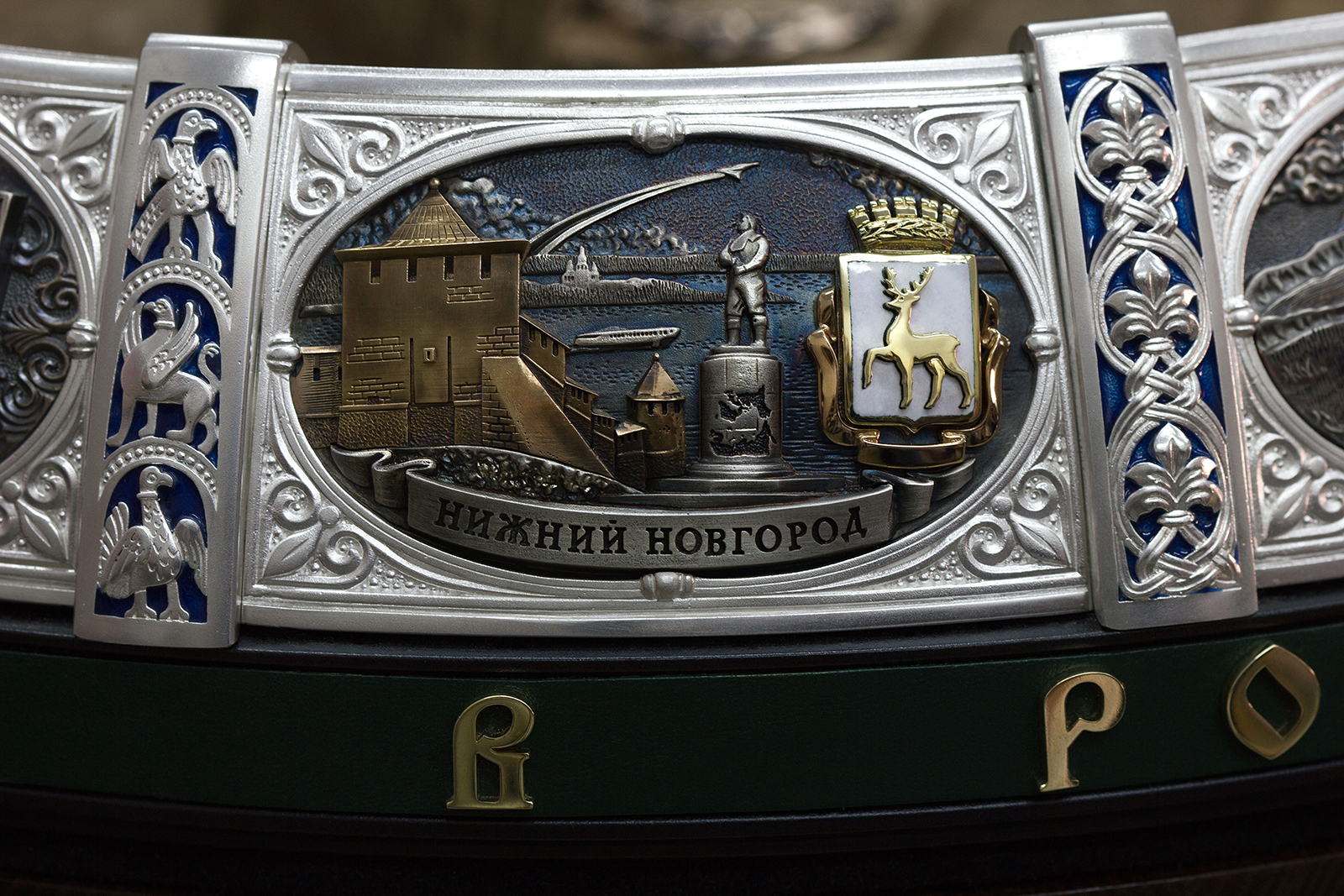 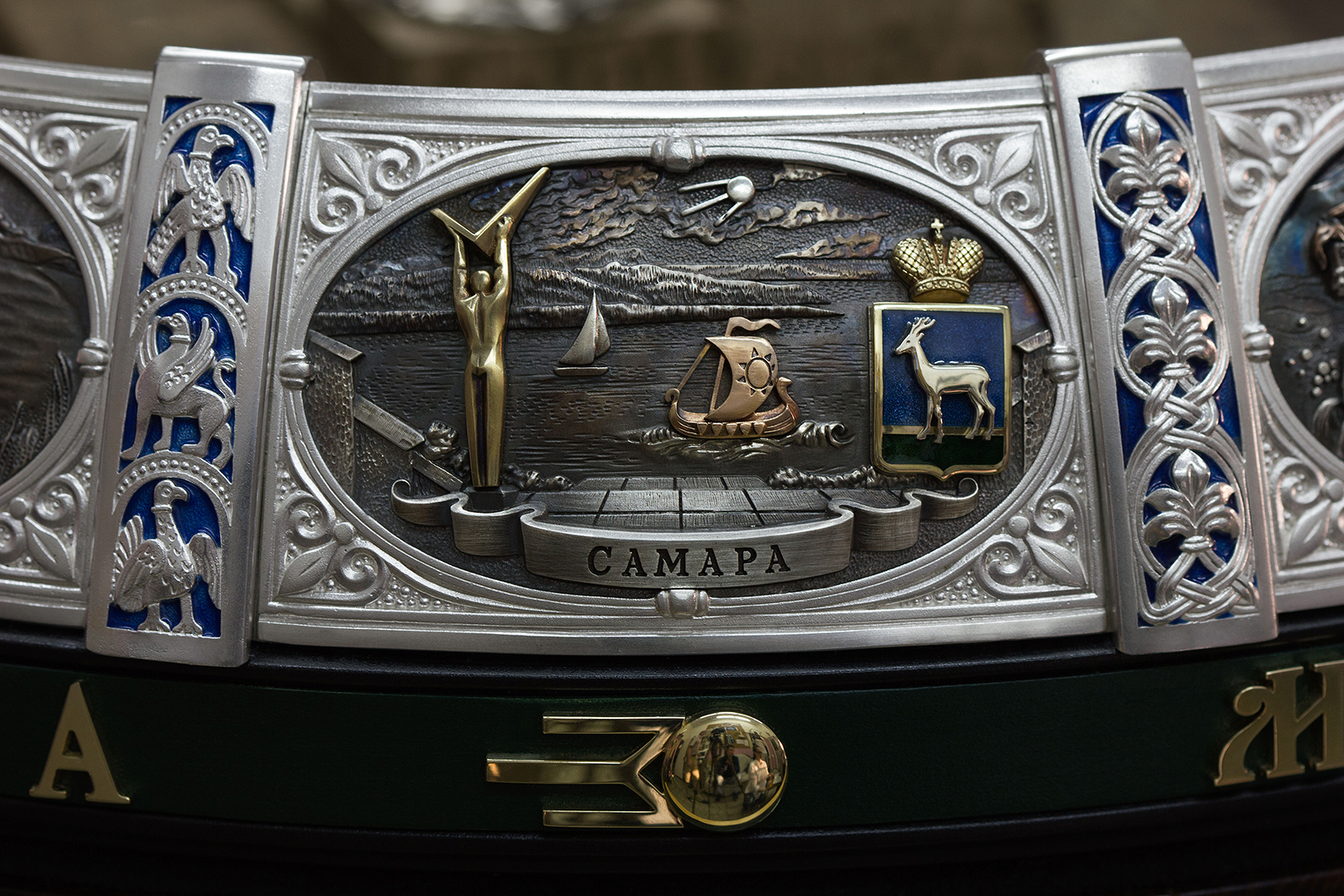 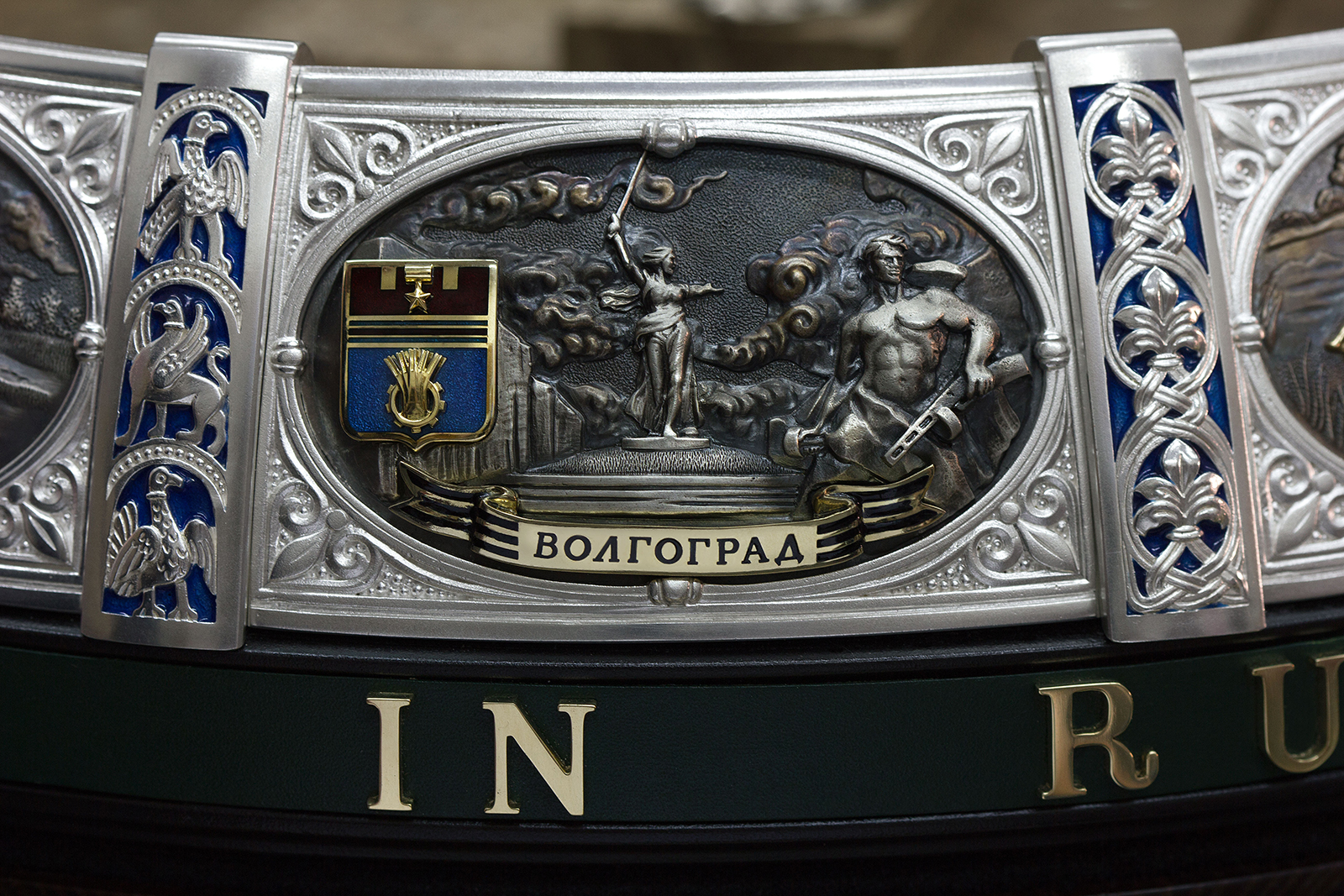 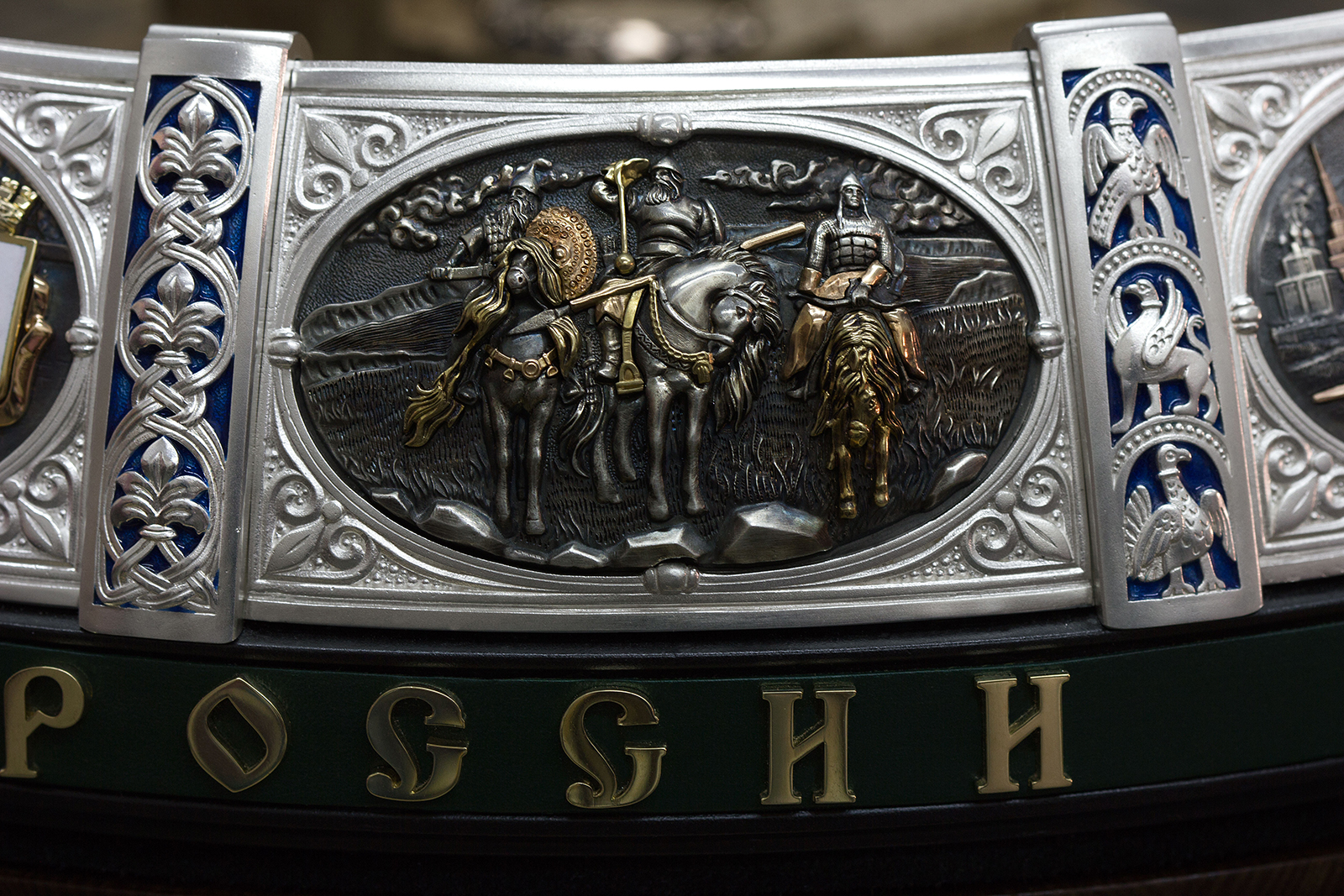 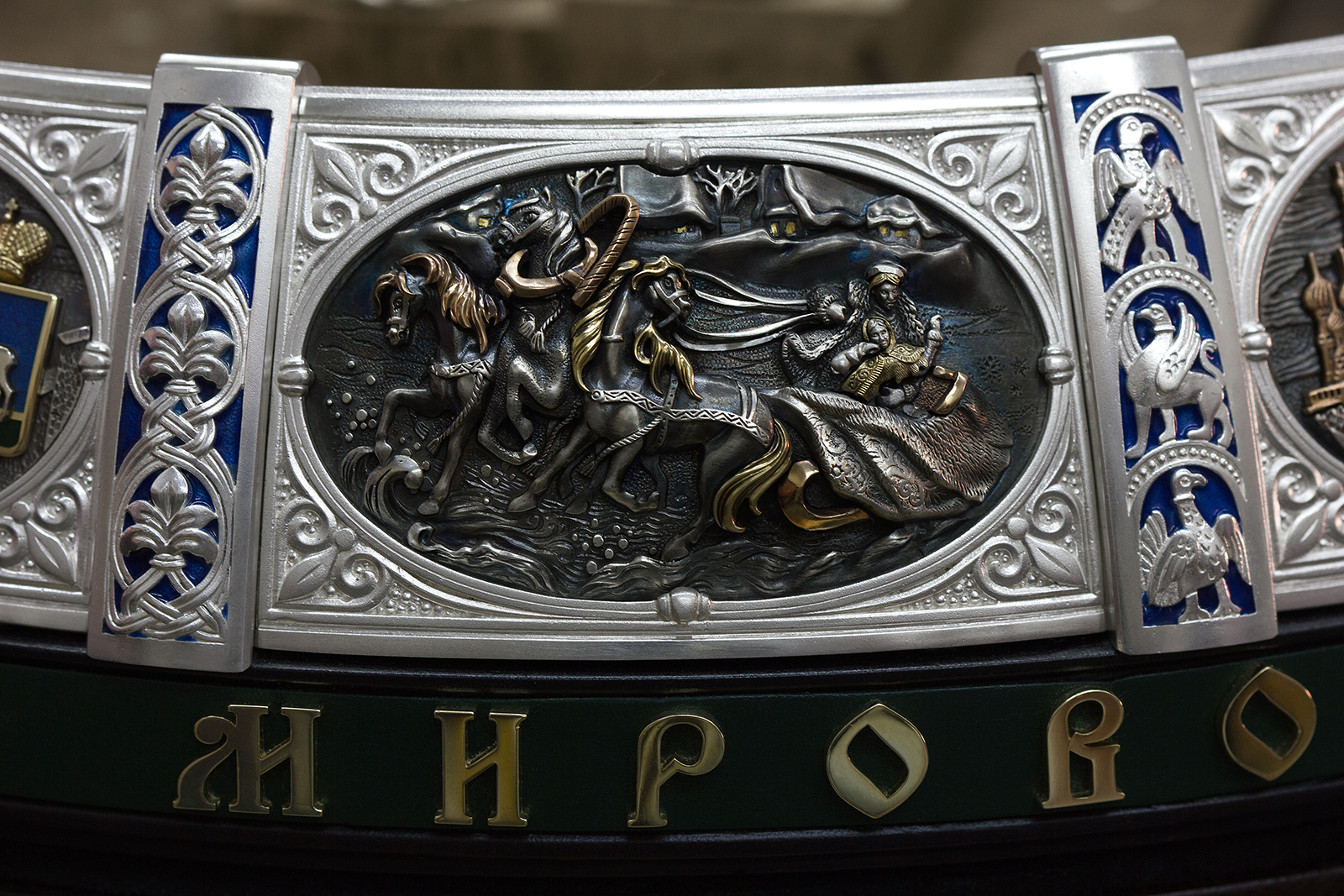 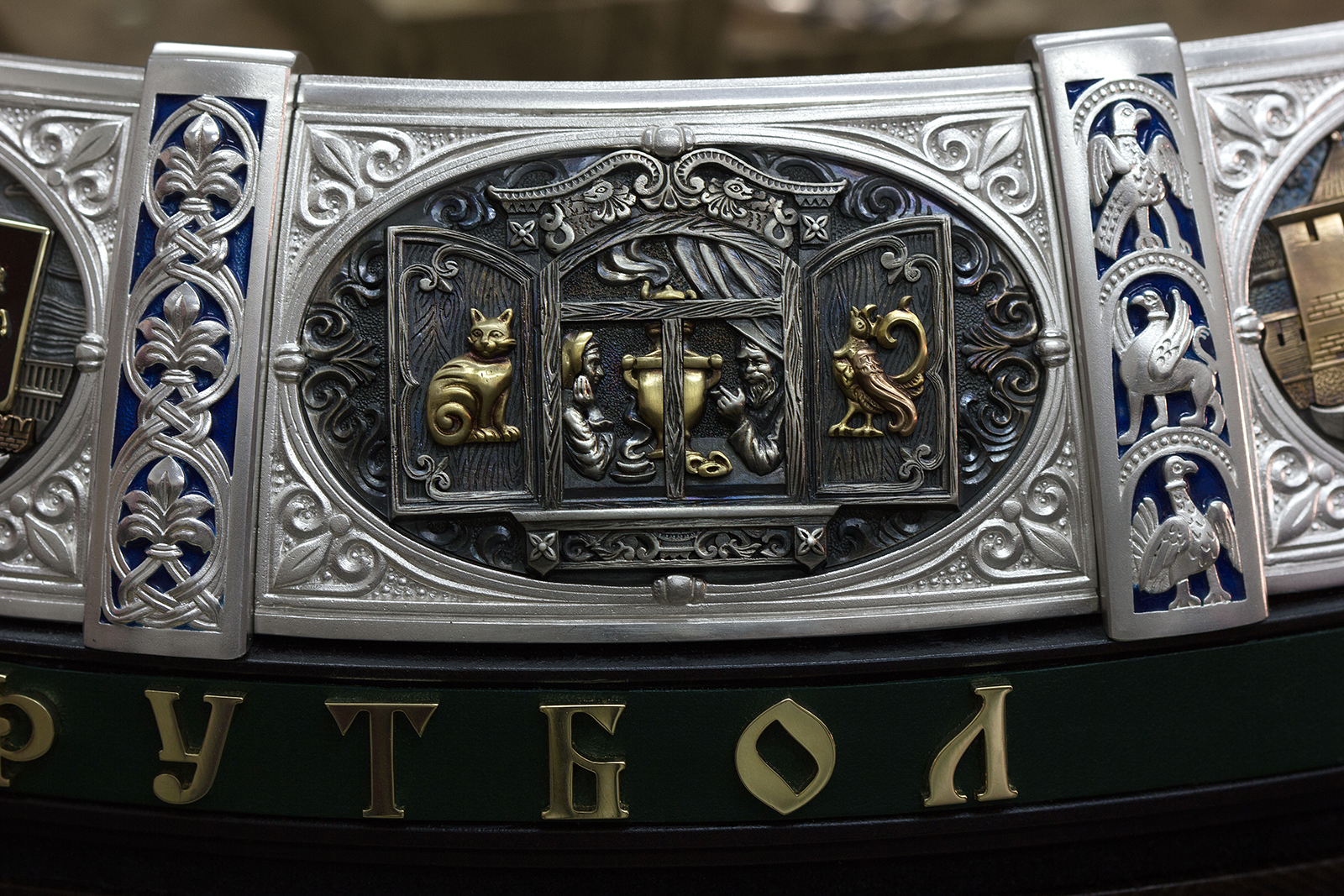 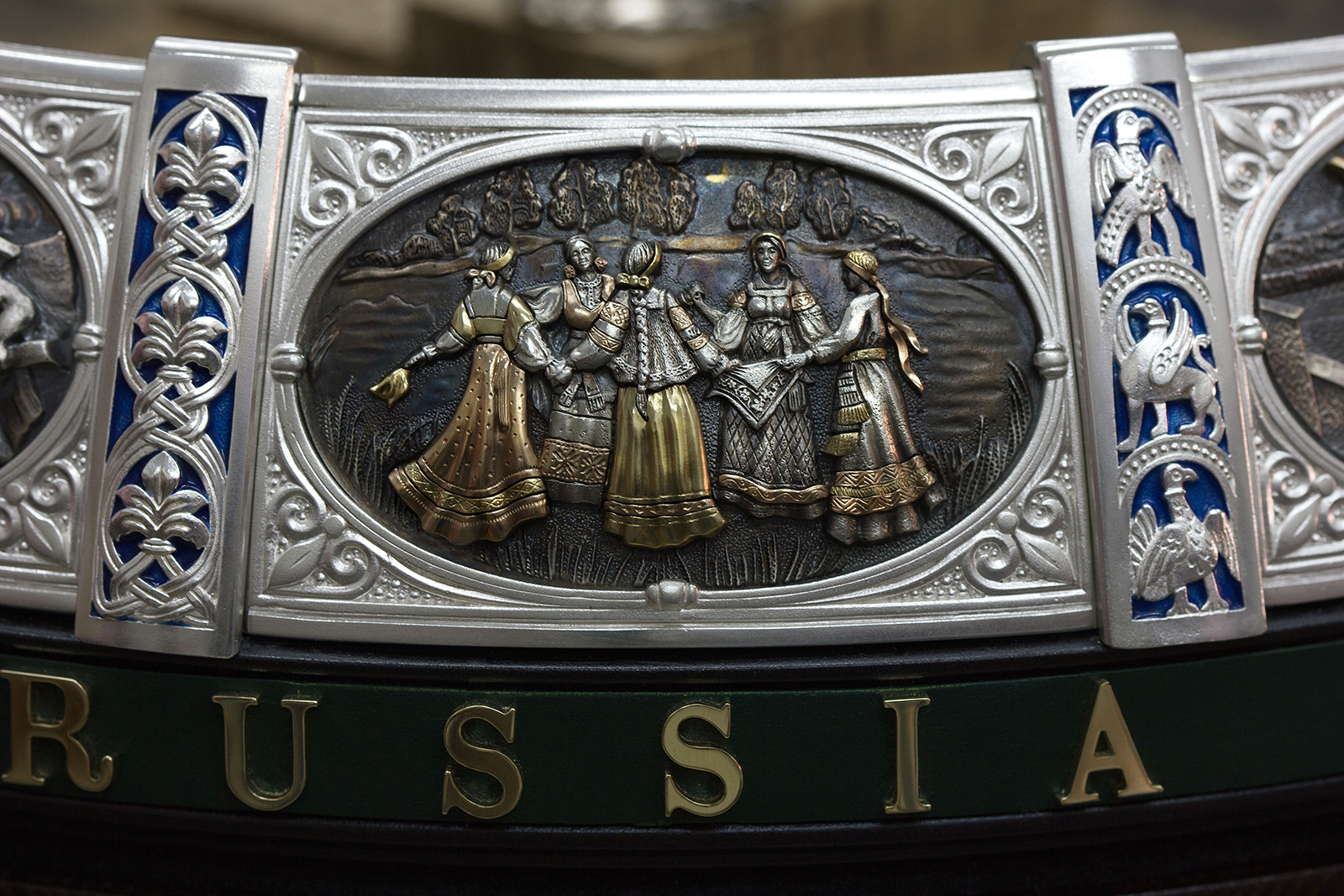 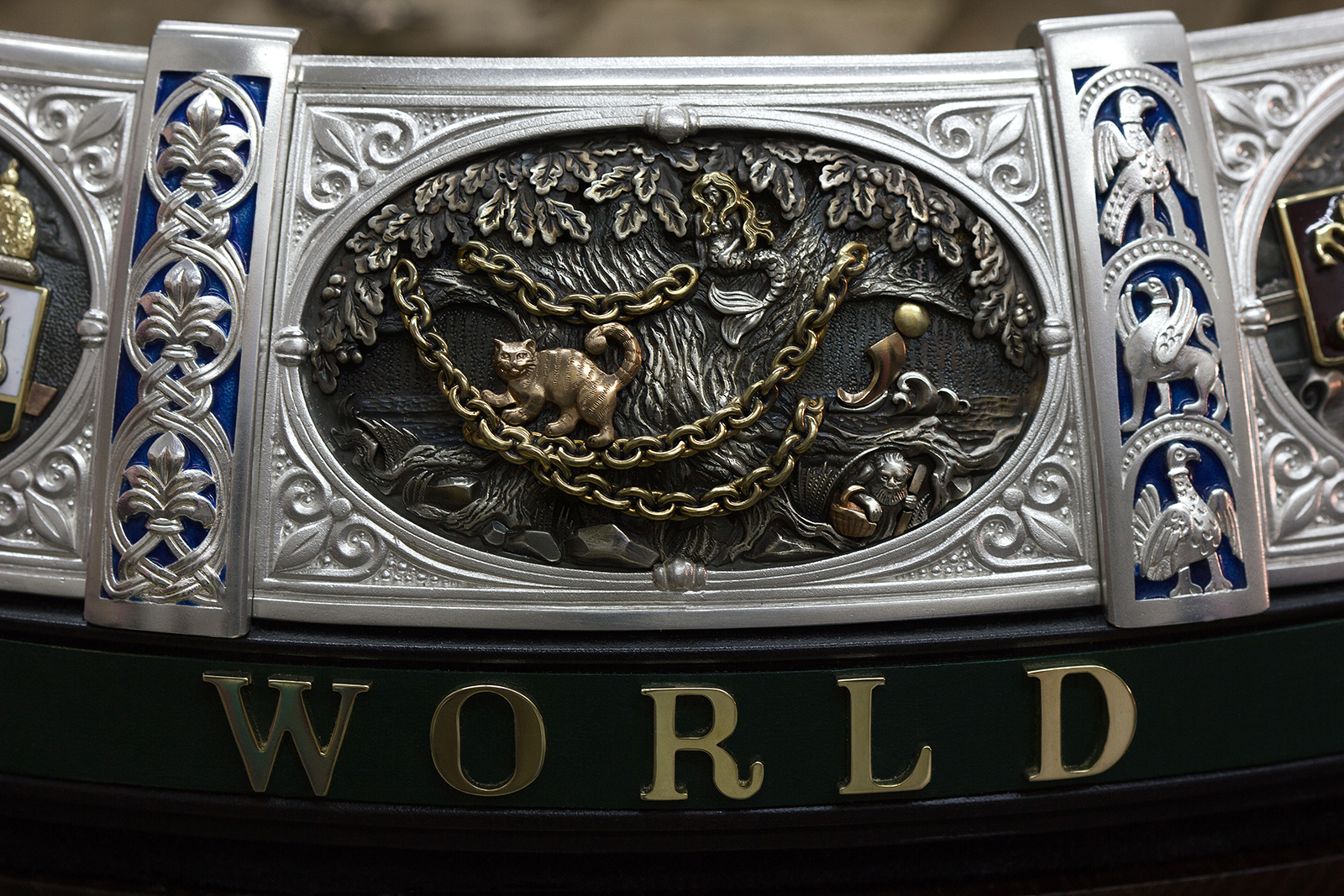 ‘Stadium 13’ became the embodiment of the skill and experiences accumulated by the MYAGKOV jewellers over the course of the studio’s existence, and its manufacture included reviving traditional techniques like engraving, hot enamel and the author’s cut. Enjoy the artistic value of the piece, and you can also get to know the leaders of the 2018 World Cup teams through the ‘Private Collection’ art jewellery salon by Nina Mikhailovna Glushakova, located in Sochi at Hyatt Regency Sochi at 17 Ordjonekidze street.