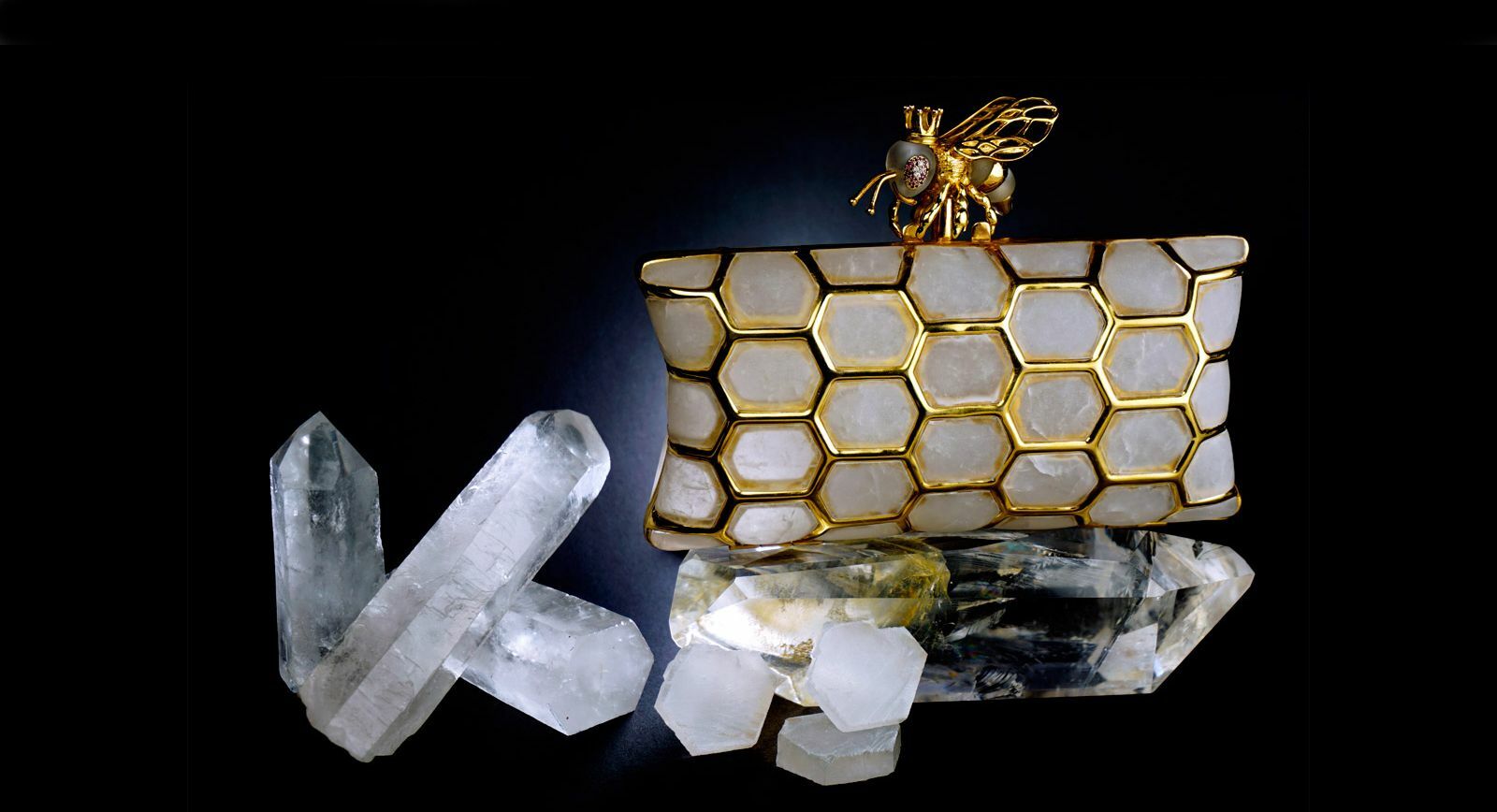 Every time I meet a new jewellery artist, I am deeply convinced that having immense talent and great craftsmanship is not enough to create something truly extraordinary. Indeed, possessing these qualities enables one to create an object of unimaginable beauty, but this creation might seem ‘lifeless’ if the master does not ‘inject’ passion into the art.

It is passion that has become an integral part of the Peruvian lapidary artist Luis Alberto Quispe Aparicio. He is the creative director of L’AQUART, the brand that specialises in creating sculptural objects from precious and semi-precious stones and metal. One of Luis Alberto’s works – the original clutch bag adorned with rubies – caught my eye recently, and I want to share my newest discovery with you. The Queen Bee clutch – crafted from gemstones and vermeil – was inspired by the ancient Greek nymph Kleodora, whose upper body resembled that of a woman and the lower part, a bee. The development and creation of this unusual accessory took Luis Alberto nearly three years. The result – Tanzanian rubies and diamonds adorning Kleodora Queen Bee clutch – is simply stunning.

“I did a lot of research before putting my ideas on paper; I wanted to ensure I was creating something that doesn’t look like an object that had already been created,” he says. 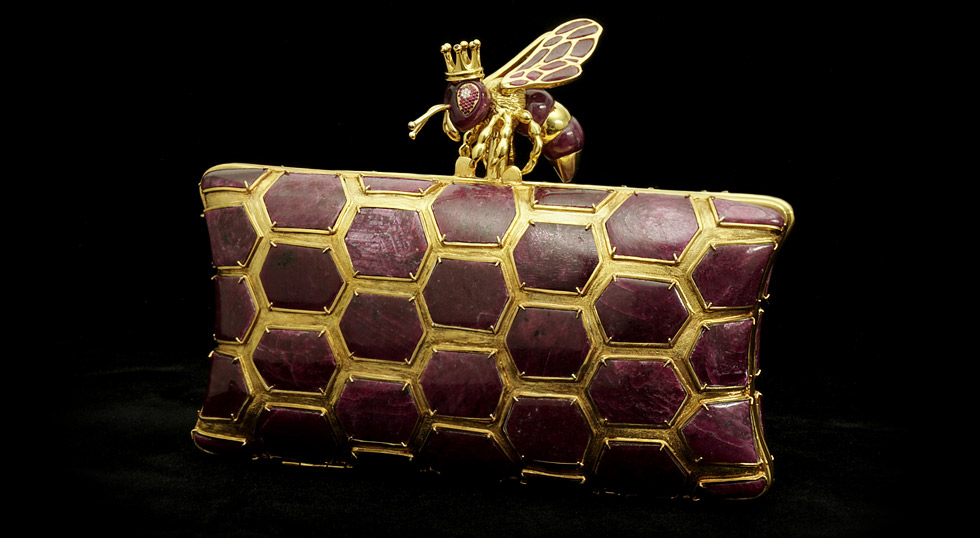 The beginning of the concept development goes back to 2012, when the stone cutter lived and studied in the French fashion capital Paris. It was there that he realised his desire to create something new – a piece of art that would combine both the elements of fashion and the art of lapidary. Indeed, fashion and lapidary is not a combination you see often. However, it turned out to be very impressive!

“I love creating objects that are unexpected no matter how difficult. They are for people who have it all. While in Paris, I avoided being influenced by trends and that sense of complete freedom gave me a flow of ideas. In fact, an MBA in International Luxury Brand Management showed me exactly where I should head to,” explains Luis Alberto.

Having formed the final idea and having sketched it on paper, the master started the manufacturing process of the Queen Bee. First, he carved the bee figure in wax and cast it. Then, he cut out the metal frame and shaped it. Later, he carved out honeycomb hexagons from ruby slabs and set them into the already crafted metal fame. It is worth mentioning that choosing rubies to decorate the clutch was no accident. Luis Alberto used this precious stone, both carved and faceted, as it is believed to bring prosperity and protection to the owner. 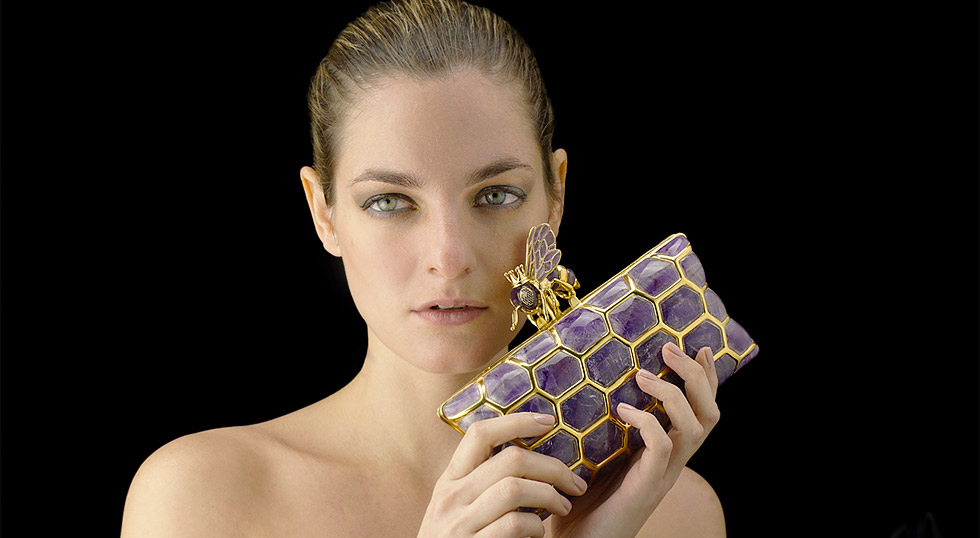 Besides the intricate manufacturing stages, there were many small steps that made the process much more complex. “The hardest thing was to obtain harmony in the combination of the techniques like lapidary, several ways of working with metal and technical planning. When it came to stone carving, the level of precision for every piece of honeycomb had to be really high. If you take a closer look, you will see that every hexagon is not flat, it has a 3-dimensional form. This is why it took a long time to carve each stone by hand and set it, one by one, into the metal frame without damaging it,” he explains.

It took nearly 500 working hours to create one clutch, since it was made by hand from start to finish. After the success of the Kleodora Queen Bee model, Luis Alberto came up with five more colour combinations: a blue clutch with lapis lazuli, a white one with quartz, a purple one with amethyst, a green one with jade and a brownish-gold with tiger’s eye. Being very exclusive, these clutches can be bought  only from the lapidary master himself. luisalberto@laquart.com