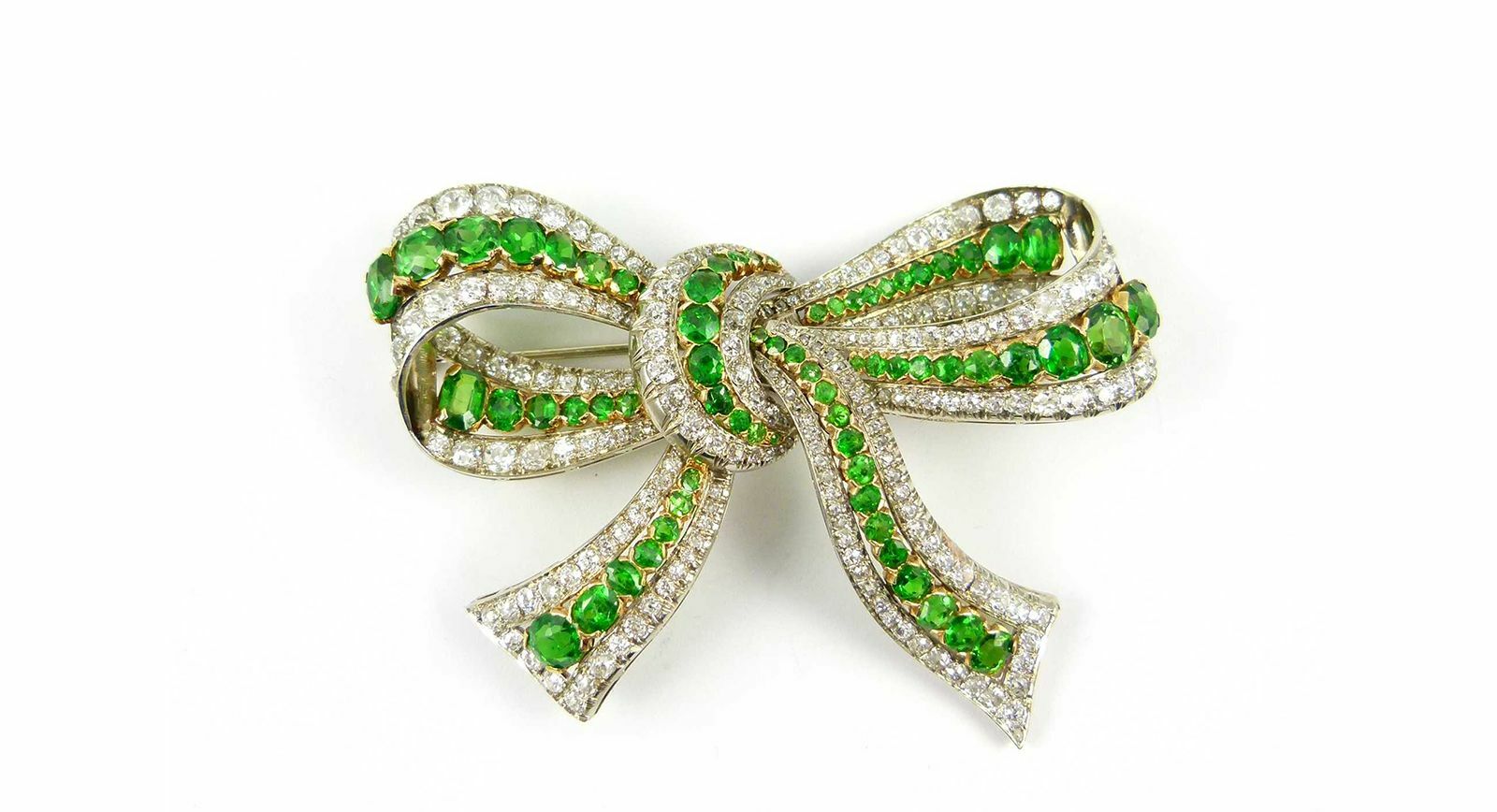 Demantoid Garnet – the Gem of Czars

The fascinating garnets have had devout connoisseurs for centuries and these gemstones were quite common and affordable. However, the term ‘garnet’ refers to the large family of silicate minerals, among which are the very rare and expensive gemstones. The most precious of them all is the demantoid garnet.

One of the reasons why I chose to write about this stone is that it is the birthstone for January. The other reason is that I received a lovely surprise for Christmas, which is a book about garnets by noted gem hunter Vladyslav Yavorskyy. I asked Vladyslav for his insight into the world of demantoid garnets; for he is a far better expert of these gemstones than I am.

1871 – the year the sitting of the Russian Imperial Mineralogical Society took place is when the demantoid garnet got its name. It is composed from the German word ‘demant’ (‘diamond’) and the ancient Greek word ‘eidos’ (‘alike’) in a reference to its rare characteristic known as ‘fire’ (rainbow-coloured flashes of light in the stone), usually specific to diamonds. However, sometimes the demantoid’s green body colour can render this effect less noticeable.

Like diamonds, demantoid garnets look best in daylight; incandescent light makes them appear slightly more yellowish-green. What then is gem’s ideal colour? Well, it really depends on individual taste. “The best colour for me is the vivid rich green; a pure green without yellowish tint and not overly dark,” says Vladyslav.

Demantoid garnets were discovered in the Ural Mountains around the mid-19th century and mined there up to the First World War. When Carl Fabergé discovered the gem, he could not resist its beauty and often used it to make jewellery and art objects for the Tzars and nobility. During the Soviet times the mines were almost forgotten. However, the situation changed drastically at the end of 1996 when demantoid garnets were discovered in Namibia. The largest mining area, ‘The Green Dragon,’ still exists there and extends over more than a 100,000 hectares, while producing ones of the most precious coloured stones.

The most valuable of garnets are the Russian demantoids that differ from the Namibian ones by way of colour and inclusions. “The main difference is the colour spectrum. The Namibian garnets have colours that vary from green, bluish-green to olive-green and yellowish-brown,” explains Vladyslav. Demantoid garnets from Russia’s Ural Mountains alone boast a vivid emerald green colour and this is what they are most valued for. They can also be differentiated by the characteristic inclusion of bissolite that resembles very fine threads radiating from the same point. This inclusion, also called the ‘horse tail,’ exemplifies one of the rare cases when an impurity in a stone adds only to its advantage. 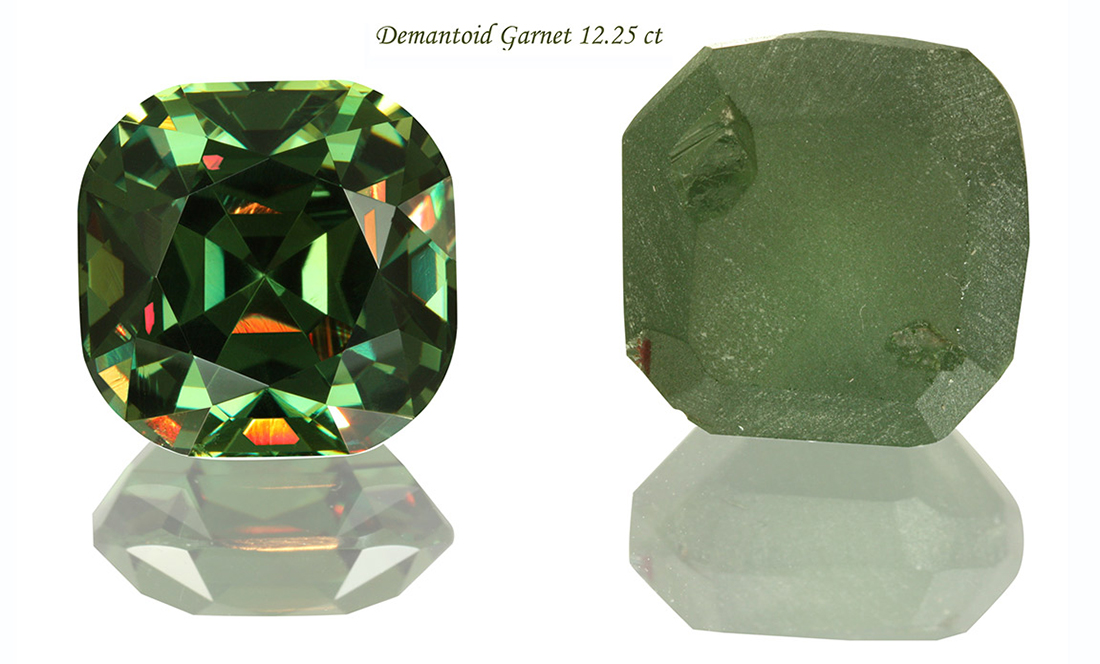 Green garnets of large sizes and high quality are hard to find and usually the size of a faceted gem does not exceed 0.50 carats. Demantoid garnets weighing over 2 carats are very rare and those over 5 carats are rather impossible to find (if gathered together, they would fit into the palm of one’s hand). Like with any coloured gemstones, the price for garnets varies considerably depending on its size and quality. Sometimes, prices may reach as high as US$10,000 per carat. In 2008, a ring featuring a 5.5 carat Russian demantoid garnet was sold at the Christie’s auction in Hong Kong for a whopping $170,876 ($50,000 higher than the top estimated price).

High quality garnets are so rare that gem collectors invariably always get their hands on these gems even before jewellers have had a chance to see them. Demantoid garnets are not very hard and this is perhaps why these stones are not often seen in jewellery. Only the top designers and brands, including Tiffany&Co, IVY New York, Hemmerle, Fabergé and JAR, have used demantoid garnets in their designs. Tiffany&Co’s gemmologist Dr. George Frederick Kunz, who worked with the company in the past, loved rare gems and was enchanted by demantoid garnets. Dr. Kunz acquired the finest garnets he laid his eyes upon. This accounts for the large green garnets (up to a few carats) found in Tiffany&Co jewellery made in the beginning of the 20th century. At present, important demantoid garnet pieces are available at IVY New York and among them is a 10.69 carats garnet ring featured on the very top image. Other brands I mentioned above also have created some spectacular jewellery with melee garnets (very small gemstones generally used in a pave technique).

I do hope you will soon begin appreciating the beauty of demantoid garnets and fall in love with these priceless gemstones like I have. 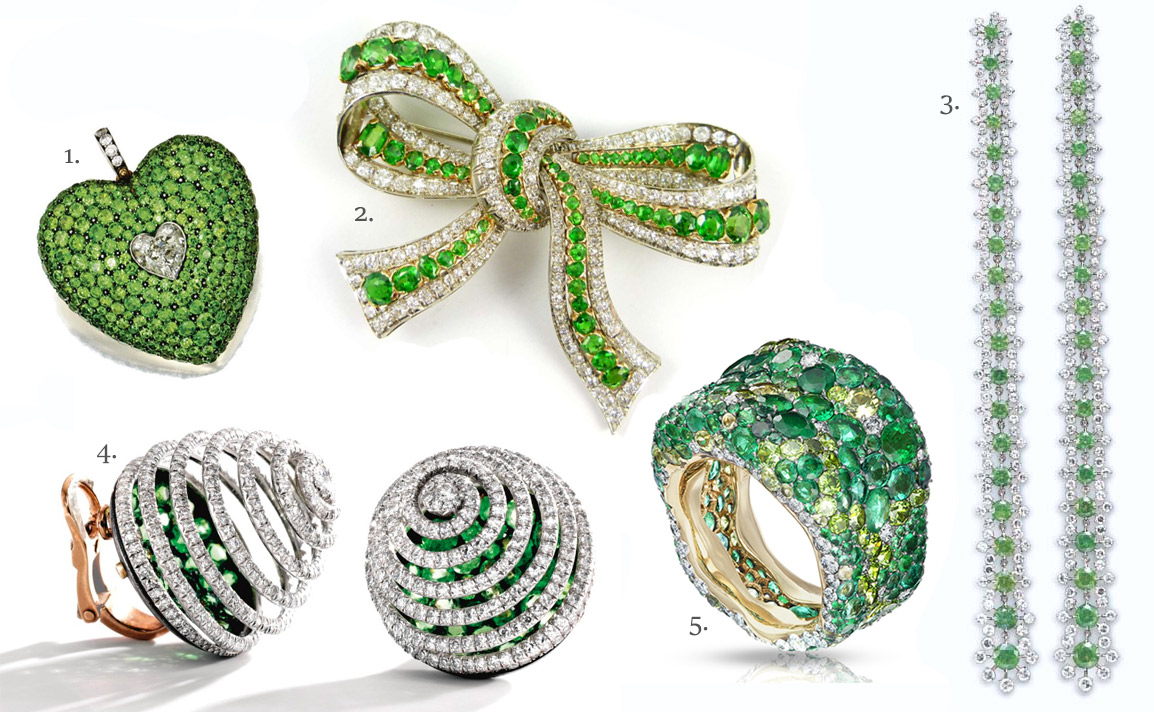 Special thank you to Vladyslav Yavorskyy who provided the images of loose demantoid garnets.