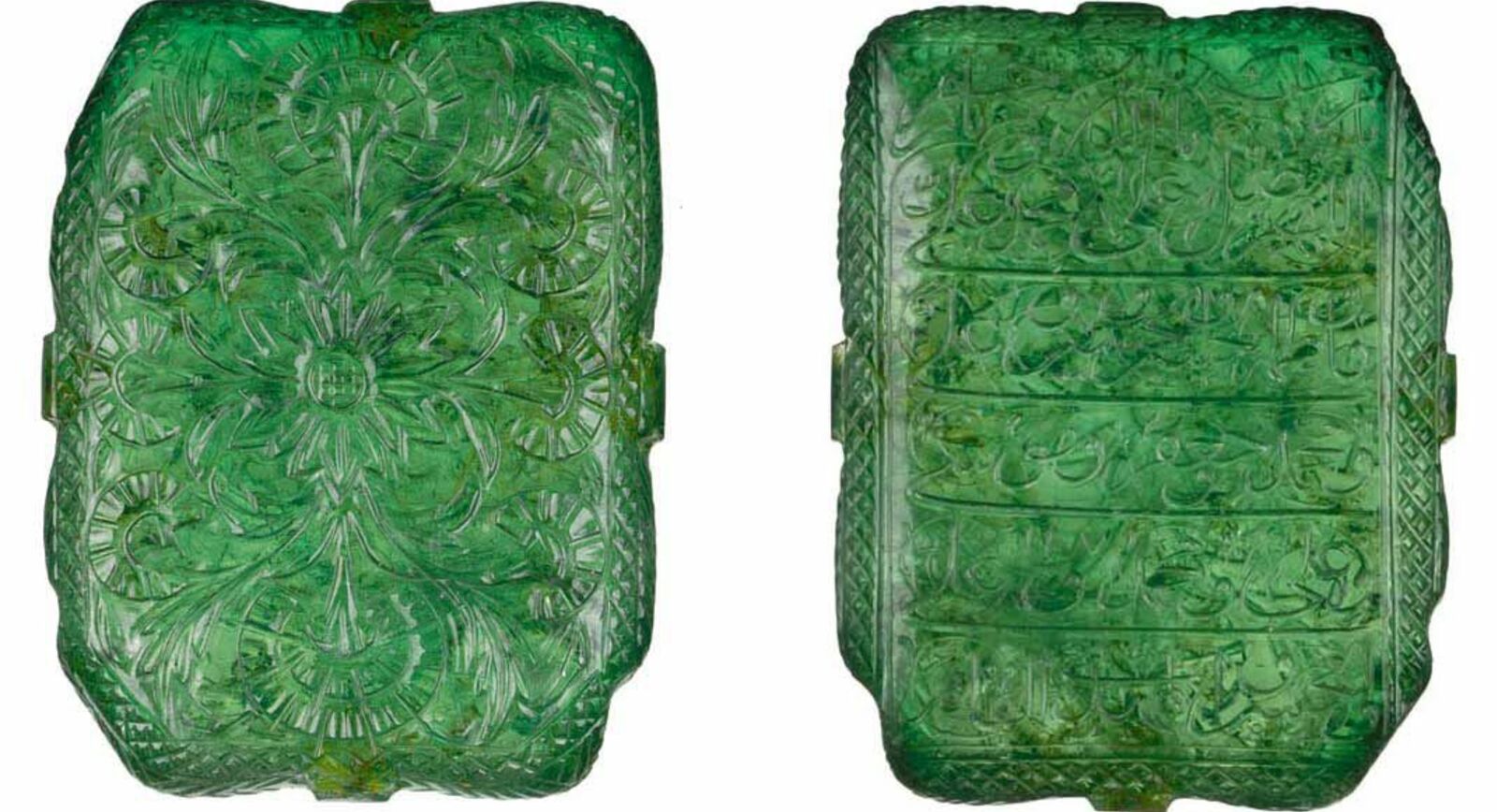 The Mogul Mughal Emerald of 217.8 carats 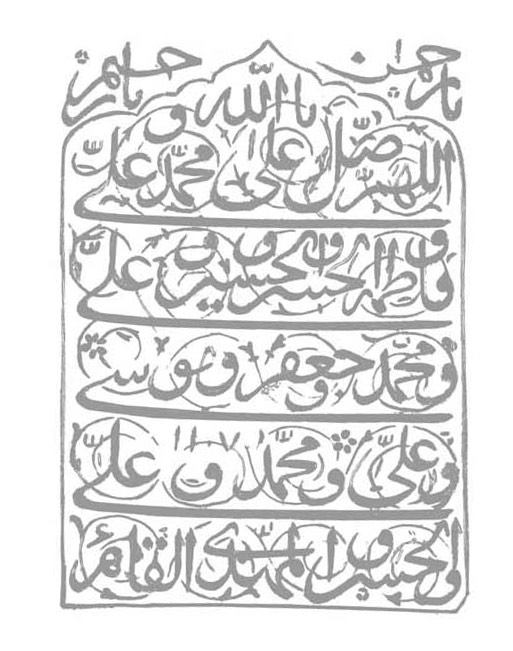 Inscribtions on the Great Mughal Emerald

“Esmeralda” belongs to a trio of the most valuable and highly sought-after colourful stones. This gem is not rare and I have encountered various types of this stone. Previously I told you about the benchmark of emerald’s beauty – Colombian emeralds and promised to list 4 important Colombian emeralds that are engraved on my memory. So here they are…

The first of these is the largest faceted emerald recorded: “The Mogul Mughal”, coming in at 217.8 carats. It was named in honour of the Mughal dynasty that ruled in India in the 16th-17th centuries. The stone was extracted in Columbia and sold in the second half of the 17th century to Aurangzeb, the last of the Great Mughal rulers. The emerald is about 10 centimetres long, on one side engraved with five lines of Islamic text written in calligraphy and on the other with flower patterns. After the stone was bought in 2001 at a Christie’s auction for $2.2 million, nothing much was heard about it. The GIA website states that the Mogol Mughal can be found at the Museum of Islamic Art in Qatar.

The second largest Colombian emerald to have come from the Muzo mine weighs 206.09 carats and belongs to a family of jewellers that run the American brand Bayco. The Hadjibay family has already for generations practised the trade of unusual precious stones. The family business was started by Amir Hadjibay. He happened to spot the stone amongst those belonging to one of his private clients. Stunned by the clarity and incredible colour of the stone, Amir waited 40 years for the moment when he could buy this amazing gemstone. The Hadjibay family presented it for the first time to the public at the World Watch and Jewellery Show Baselworld 2013 which I have already written a piece about. 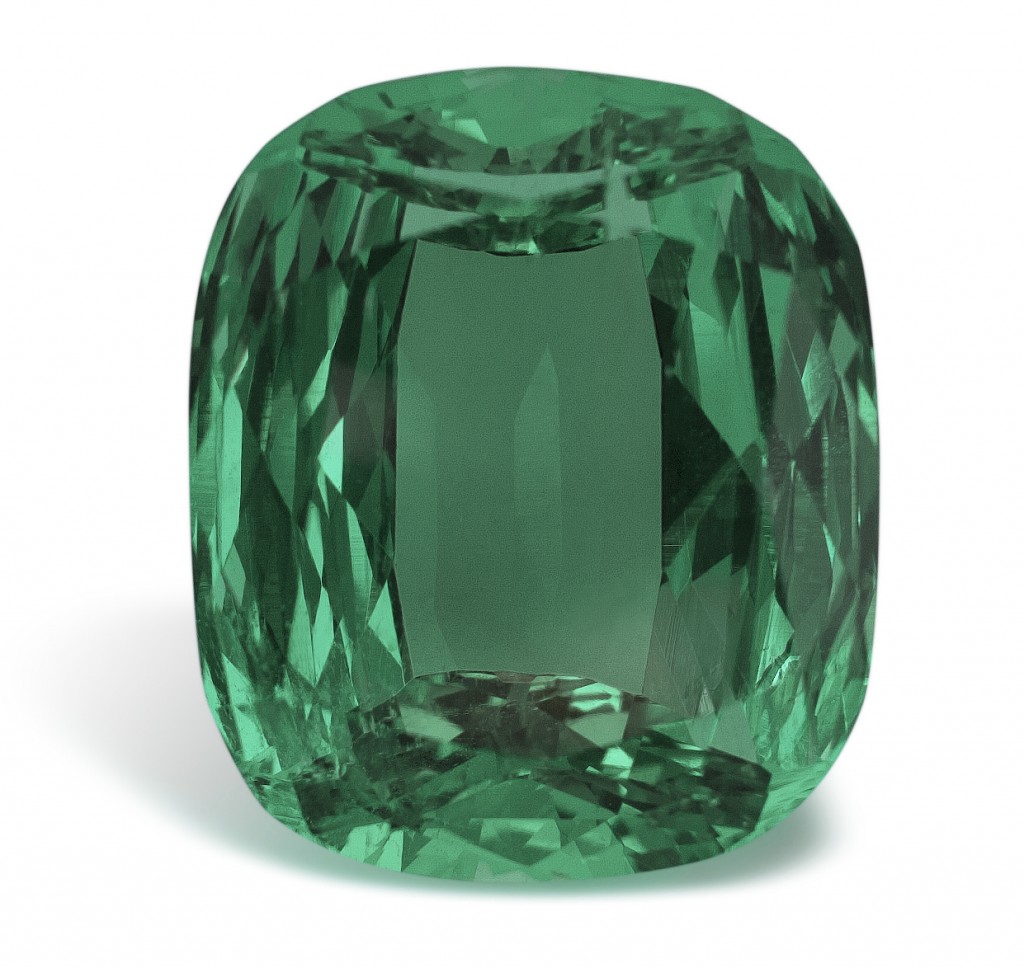 Hooker Emerald set in Tiffany&Co brooch. The photo is from the website of Smithsonian Institute, photographer – Chip Clark 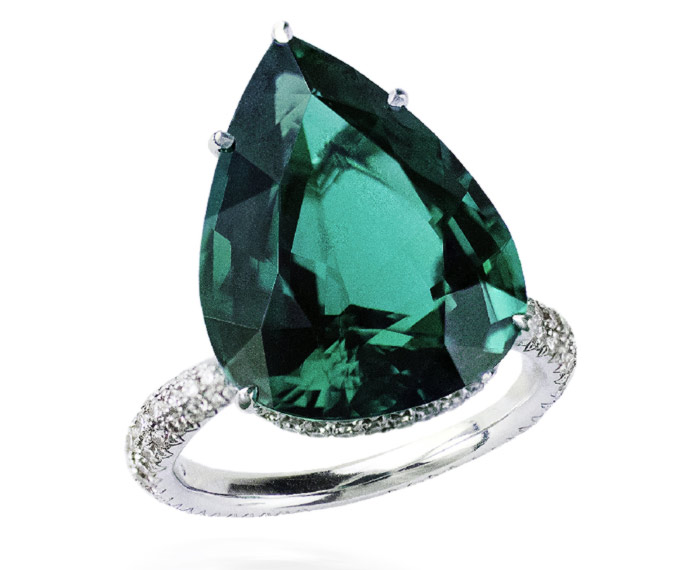 In third place comes the Hooker Emerald that is inimitable for its clarity and perfection. Weighing 75.47 carats, the stone was brought to Europe from Colombia in the 16th-17th century by Spanish conquistadors. At a later stage, the stone was faceted and polished to be shaped like a square. It became an Ottoman crown jewel during the reign of Abdul Hamid II, one of the last sultans of the Ottoman Empire. In 1908, his crown jewels were illegally shipped to Paris with the aim of being sold to the dealer Salomon Habib but he eventually auctioned off the Hooker Emerald to cover his debts. It was the American jewellery company Tiffany&Co that acquired the jewel at the auction in 1911 and created a tiara for which a willing buyer was never found. Consequently, the emerald was re-set into a brooch and featured with matching earrings. In 1955, a philanthropist Janet Annenberg Hooker bought the brooch from Tiffany&Co for an undisclosed price before her husband, James Stuart Hooker, donated it to the Smithsonian Institute in Washington, D.C. where it remains to this day.

And last but not least I mustn’t forget to mention the emerald I saw at Swiss maison BOGH-ART. A pear-cut stone and weighing 10.23 carats, it boasts as good a clarity as a tear with no indication of its enhancement (which is particularly uncharacteristic of emeralds). Since the gem is flawless it is impossible to indicate its origin, but the colour is very close to the of emeralds mined in Columbia. Of course, I’ve seen some stones which are bigger that this BOGH-ART gem, but the “golden combination” bestowed by nature on this gemstone of extremely good transparency, a juicy colour and a bright, completely undimmed glimmer, makes this stone especially unforgettable.

Now that I have shared my top four with you, I would like to know about your favourite jewellery pieces that are also made with emeralds. Send me your photographs by e-mail to info@katerinaperez.com. I’ll be posting them as part of a separate article.