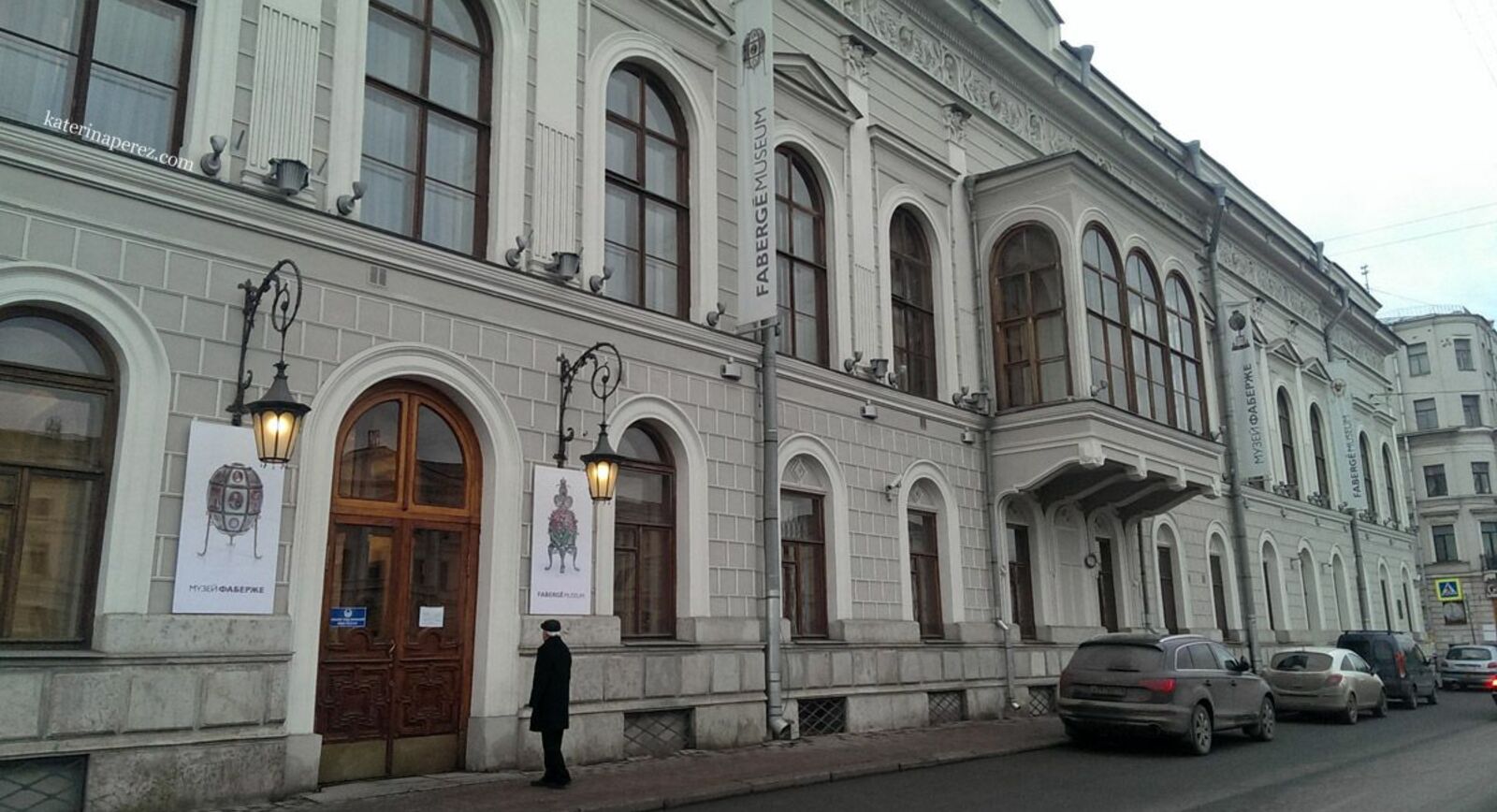 The Fabergé Museum in St.Peterburg and its Treasures 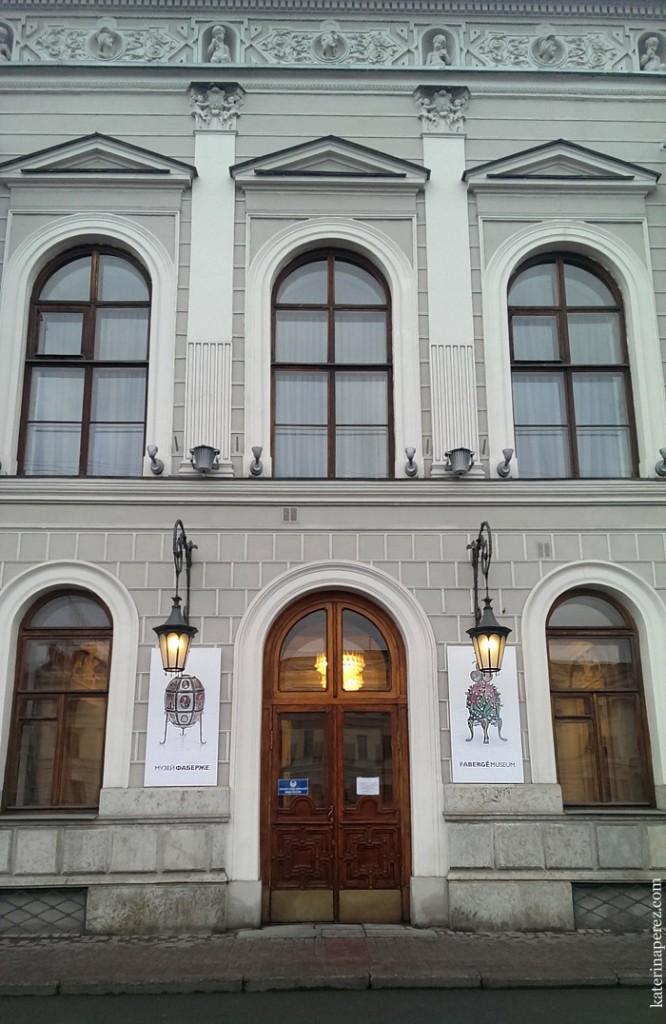 A historically important event took place in St. Petersburg at the end of 2013: the Fabergé museum was opened at the Shuvalov palace. Primarily, the museum is a place for the display of the largest collection of works by Carl Fabergé’s maison, including nine famous imperial Easter eggs.

Currently, only pre-booked groups can visit the palace and so not everyone can see it. Since I was lucky enough to visit its exhibition halls and enjoy gazing at the pieces on display with my own eyes, I, with the museum’s permission and thanks to the collaboration of the best interior photographer in St. Petersburg, Alexandre Grekov, can offer you a virtual tour of the Fabergé museum.

Proudly positioned on the bank of the river Fontanka, the Shuvalov palace is considered one of the grandest and most majestic private palaces in St. Petersburg. It was here that magnificent balls, receptions and celebrations were held, usurping the attention paid even to the most imposing neighbouring buildings. St. Petersburg’s artistic elite of the day and the aristocracy spent much their time at the palace.

The palace is named after its last owners: the noble Shuvalov family, who were preceded by the Vorontsovs and the Naryshkins. After suffering enormous damage during the First World War, the once splendid halls were in ruins and, to recreate its magnificence, the fund for cultural history “The Link of Times” undertook the complex restoration work that was needed and lasted for more than five years.

Now, the rooms of the Shuvalov palace are back in their original condition. They have become the ideal setting for Fabergé’s Easter eggs and a collection of ornamental works from between the second half of the 19th century and the beginning of the 20th century. Initially, almost all of Carl Fabergé’s creations displayed in the palace belonged to the collection of the media magnate Malcolm Forbes. His collection was threatened by a “split-up” for collectors at Sotheby’s but, to stop this from happening, Victor Vekselberg bought all 215 pieces in 2004 for which he deserves to take a bow. 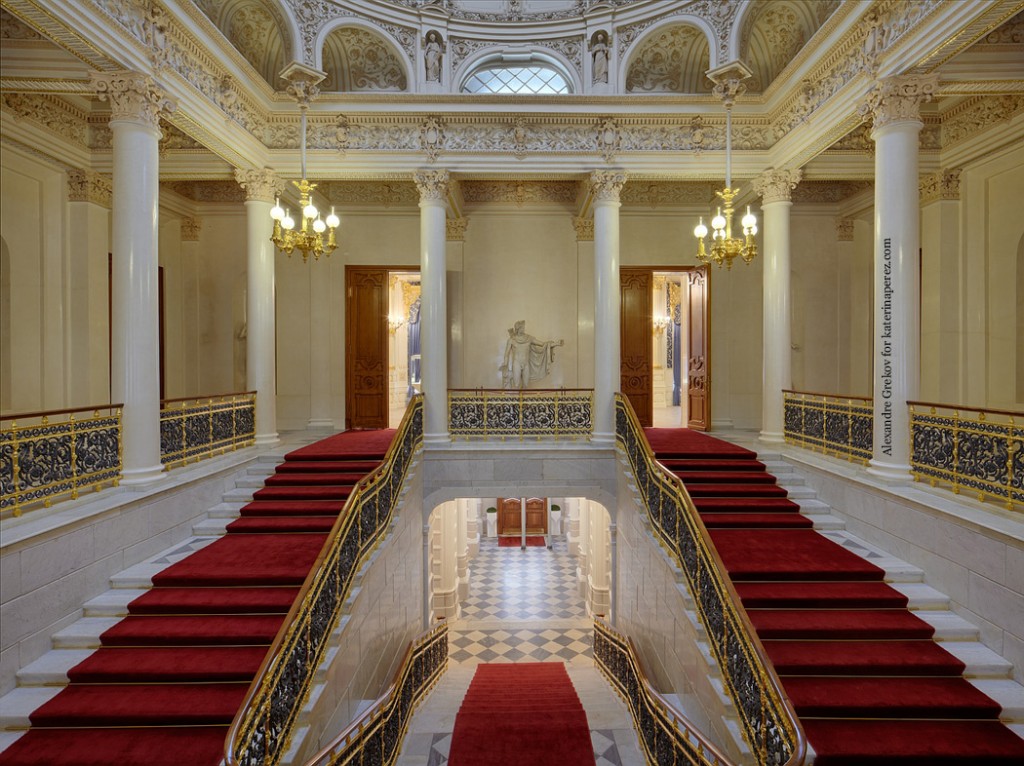 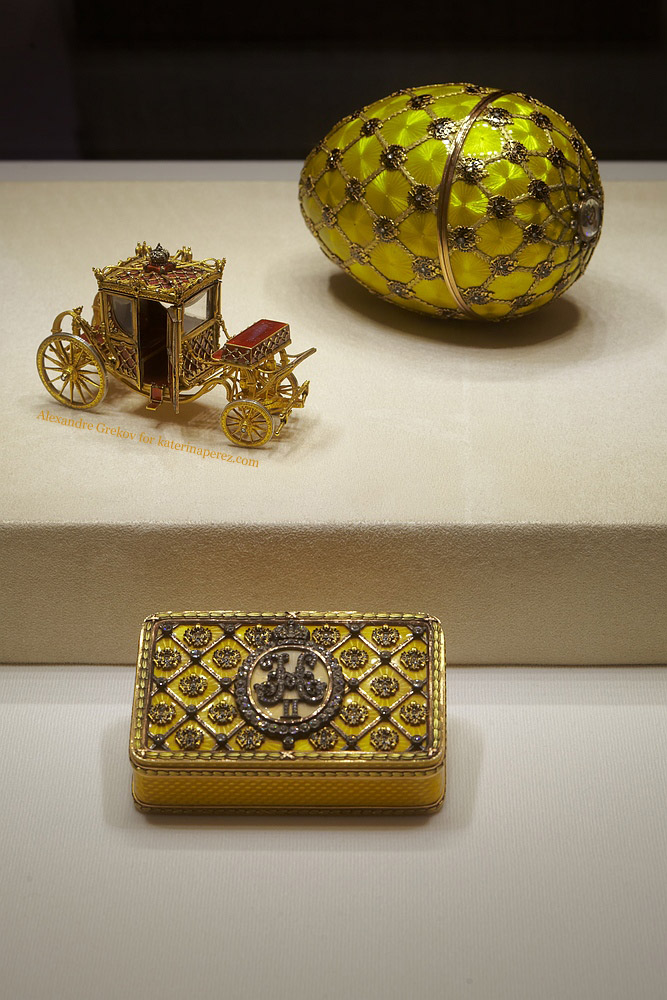 Faberge “Coronation” egg made in 1897 for Empress Alexandra Feodorovna

So, let’s go up the grand staircase of the palace. Until the end of the 18th century, there used to be a grand entrance hall here instead of a staircase, but now there’s a wonderful view of the dome, columns and a gallery above. After going up the staircase, you can see the entrance to the main hall, a dark blue lounge where the heart of the collection lives: nine imperial Easter eggs.

This is the second largest collection of Easter eggs in the world, the first being that which is displayed in the Kremlin Armoury museum in Moscow (where there are ten). Nevertheless, the Shuvalov collection includes some key pieces, not least the very first “Hen” egg commissioned in 1885, the last egg in the “Cross of St. George” series, the last egg ordered by Alexander III for his wife and the first egg made for Nicolas II for his wife. One might say that these imperial eggs on display at the palace are enriched by their political subtext and several important moments in history, meaning the collection doesn’t fall a bit behind the Kremlin’s in Moscow.

Probably one of the most important Easter eggs at the Fabergé museum is the “Coronation” egg made in 1897 for Empress Alexandra Feodorovna. The egg includes a medallion on which her monogram was printed. The egg was made in honour of the most important political event in the lives of the last Romanovs: the coronation of Tsar Nicolas II. The golden egg, which is covered in gold enamel, serves as backdrop to a lattice pattern, copying the design of the imperial cloak worn by the Romanovs. The ‘surprise’ inside the egg is a miniature model of the carriage designed by Buchendal in 1785 for Catherine II. It is an absolutely precise copy which took fifteen months to create.

The snuff box below belongs to an entire series of objets d’art made by Fabergé for the coronation of Nicholas II. It was designed with similar embellishments but not made for a member of the royal family. Rather, it was commissioned by one of the guests at the coronation: the Austro-Hungarian Minister of Internal Affairs.

The last egg, “Renaissance” (see photo above), created by Mikhail Perchin was made in 1894 for Tsar Alexander III as a gift for his wife Empress Maria Feodorovna. This piece has its own prototype: an agate casket with a standard horizontal lid modelled with a “cage work” design. Fabergé noticed it whilst studying his craft at Dresden’s Green Gardens gallery. Incidentally, the casket is still there to this day. 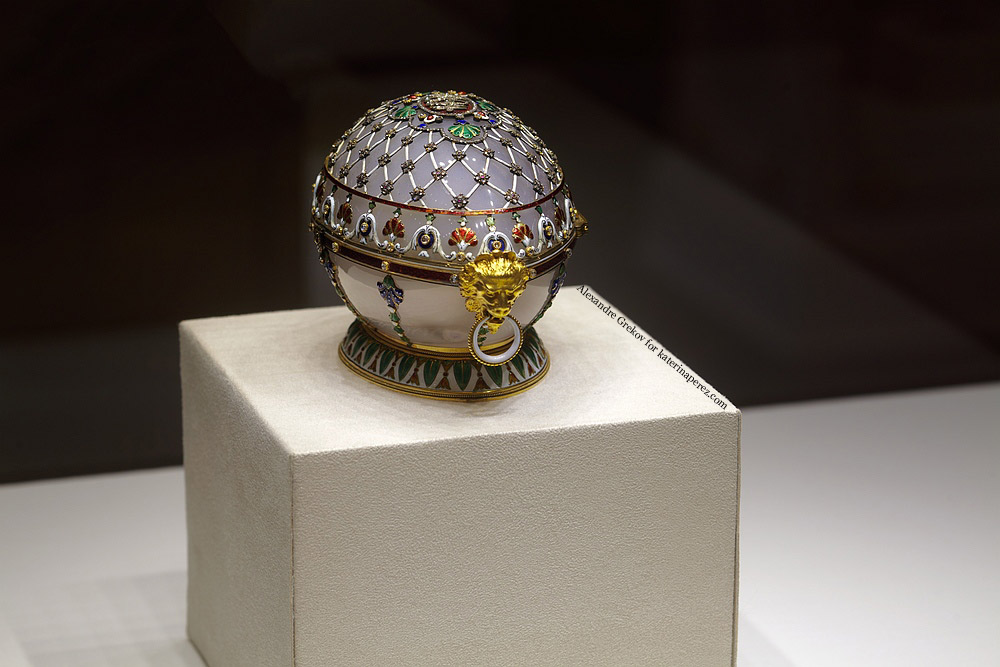 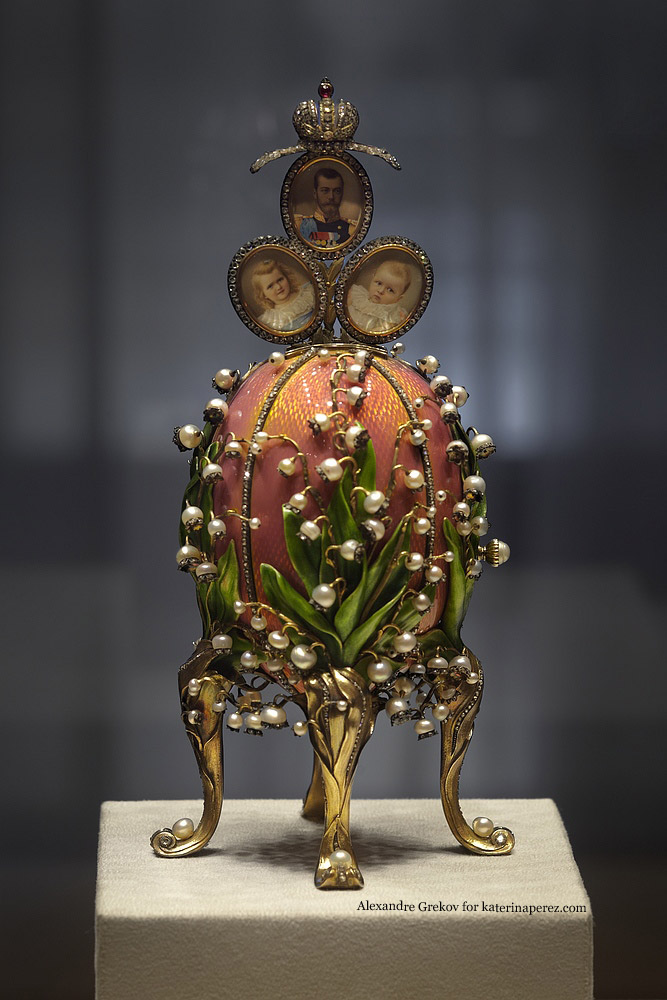 The “Lilies of the Valley” egg (the one on the left), made in 1902 for Nicholas II (again for his wife Empress Alexandra Feodorovna) is especially symbolic. The pink colour signifies the Tsar’s devoted love for his wife and the lilies represent female purity. This egg was made in honour of their two daughters, Princesses Olga and Tatiana. The ‘surprise’ inside is a mechanism with a triple frame which rises from the bottom of the egg when you turn the small lever to reveal three scrimshaw watercolours.

The favourite egg of the collection’s former owner, Malcolm Forbes, was the “15th Anniversary” (see below). This egg’s ‘surprise’ is not hidden inside but on the surface in the form of fifteen watercolour miniatures by Vassily Zuyev depicting the most important moments in the fifteen year reign of Nicolas II and his family.

The “Orange Tree” (the one on the right) egg was also made in 1911 at the bequest of Dowager Empress Maria Feodorovna. It appears to be more of a symbol of an egg as it depicts the crown of a tree.

325 jade leaves were individually cut from Carl Fabergé’s favourite ornamental stone: Sayan jade. The trunk of the tree and the soil are made from different colours of gold, the pail from Mexican onyx and the plinth is also made from Sayan jade. This work of art is dappled with citrine quartz, almandine garnets and rose cut diamonds.

Its ‘surprise’? Unfortunately you can’t see it in the photograph. On the crown is hidden a bird and on the back there’s key which works the mechanism.

The last finished work of the imperial egg series is made of silver and known as “The Order of St. George” (see below). This was a significant medal, awarded only for military valour, bravery and service. The egg was made in 1916 for, judging by the monogram, Dowager Empress Maria Feodorovna. Its ‘surprise’ is two miniature portraits of Nicholas II and Tsarevich Alexei, on one side showing with the Order of St. George (III class) and, on the other, the Cross of St. George which Nicholas and Alexei were awarded for their presence at the front. 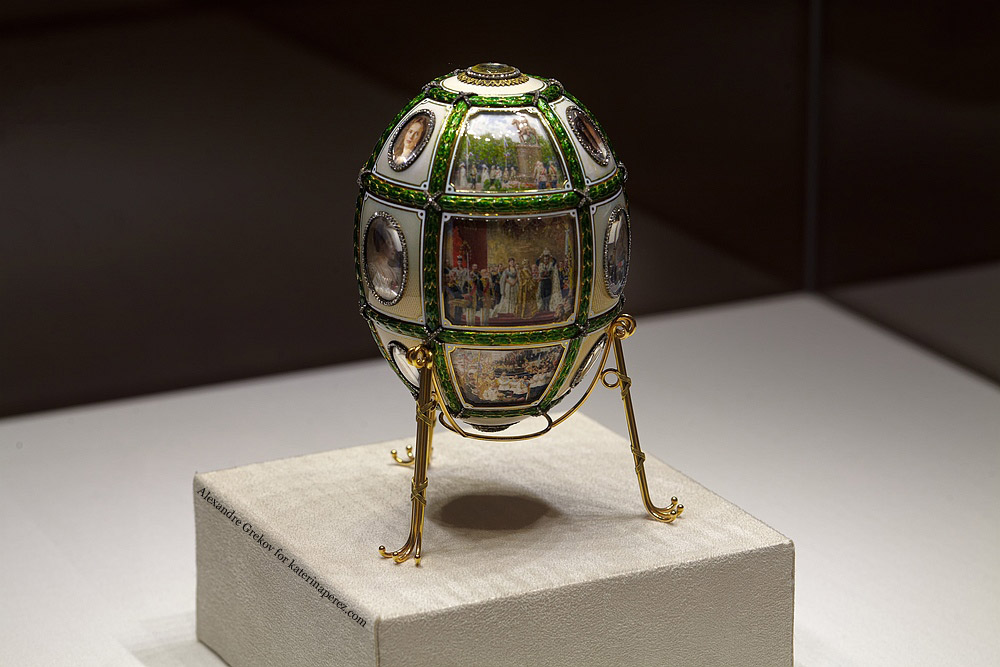 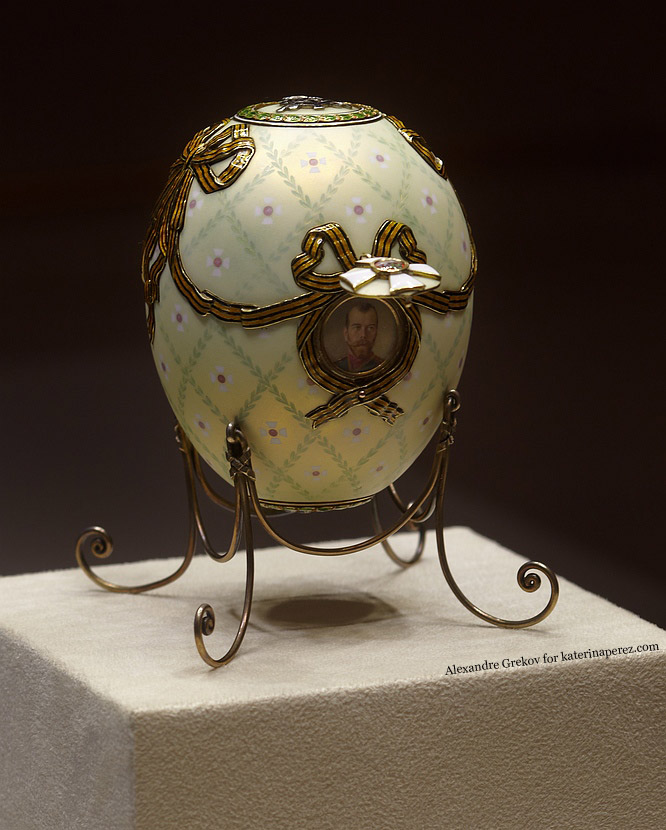 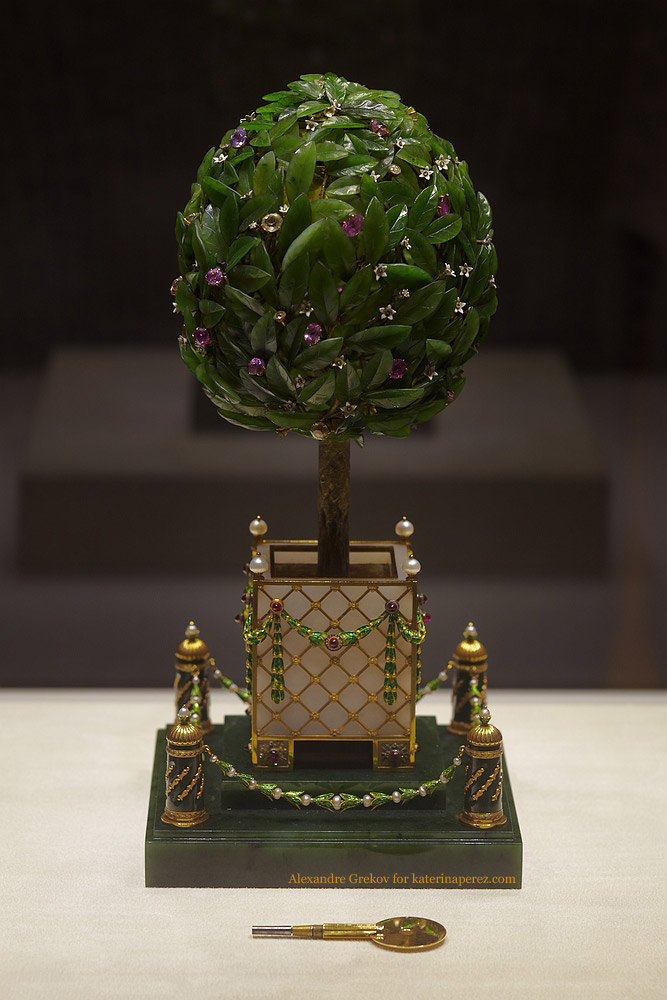 So now you have seen six magnificent imperial Easter eggs. That leaves three more for you to see when you visit the museum yourselves along with the other creations of Fabergé, including the Easter eggs that have belonged to other grand and reputed families of the world’s elite. KP