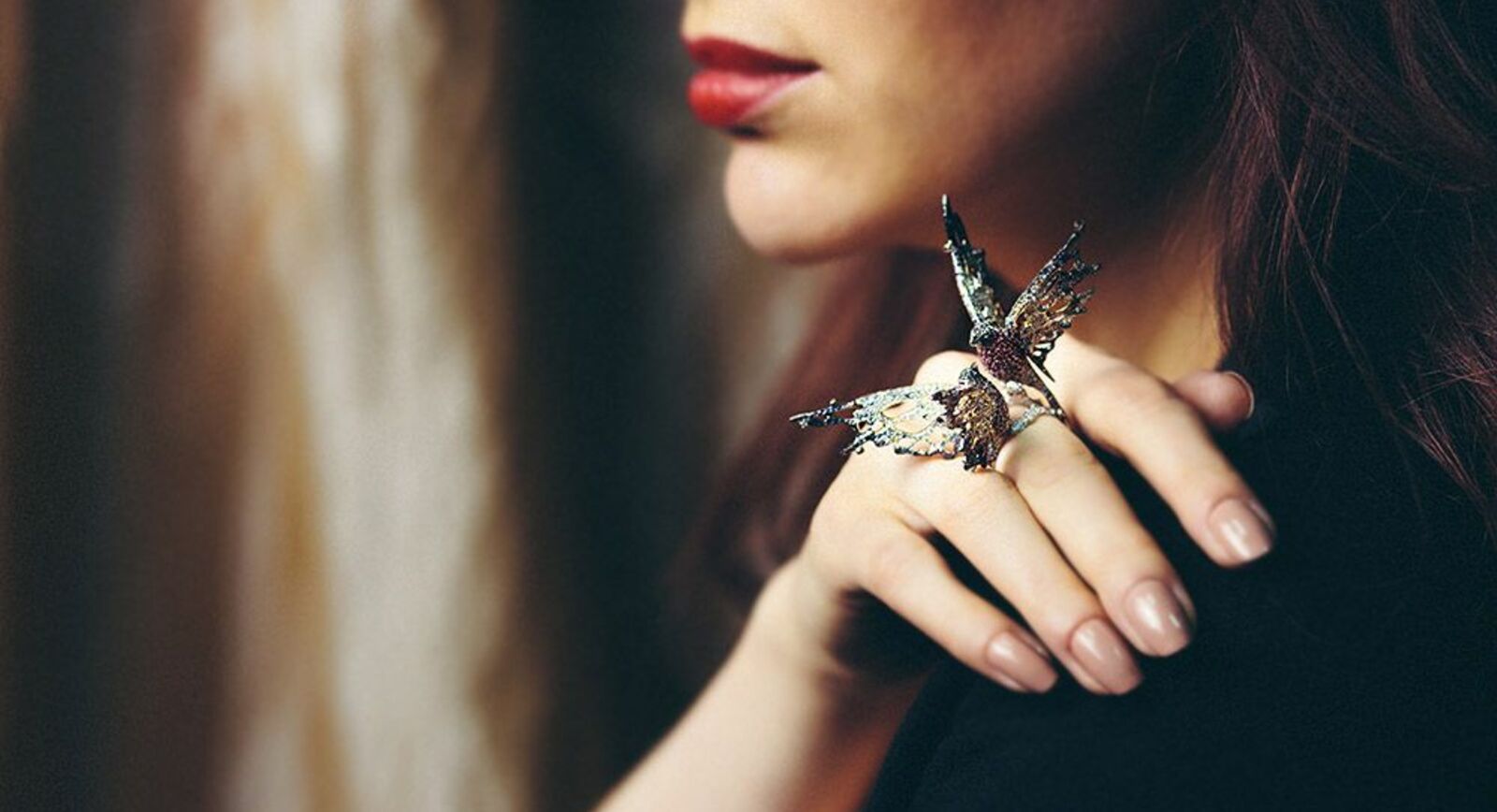 An Enchanting Bullfinch Ring from the ICHIEN’s Fantasy World 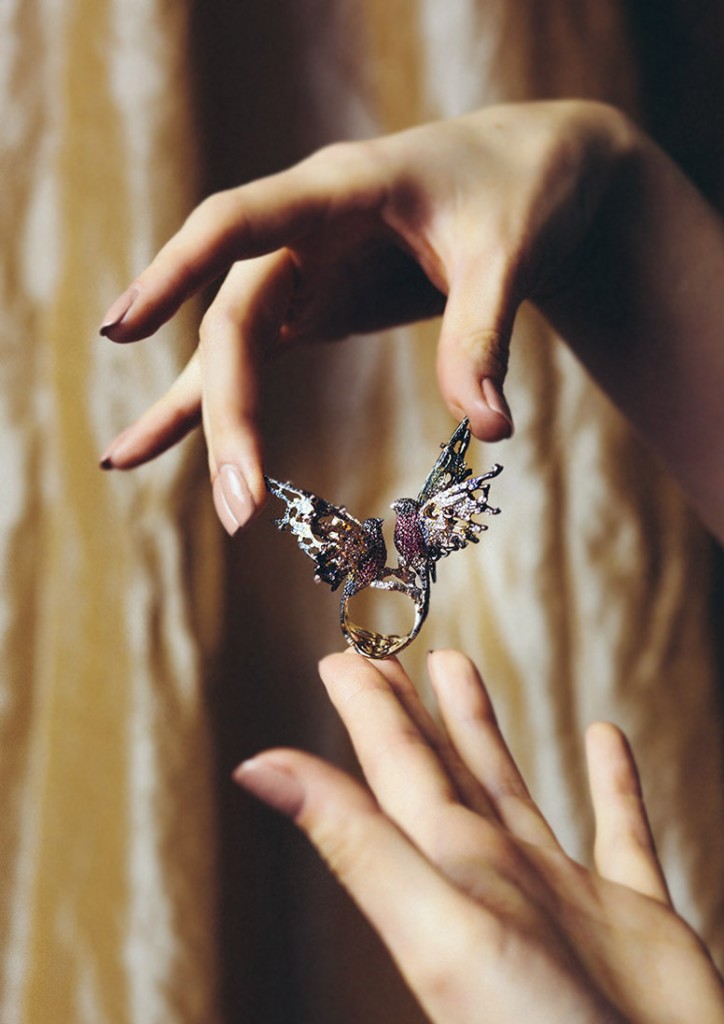 After only just returning from Moscow, I cannot wait to share my next discovery with you: a charming ring with bullfinches created by the ICHIEN team.

ICHIEN is a Moscow based atelier where miracles are made: the imagination of ICHIEN’s founder, the artist Ichien Ballaga, constantly produces high jewellery art that, at first, appears on the artist’s drawing pad as a simple pattern. As the drawing begins to acquire a definitive form, a particular colour palette and a certain technical unity, Ichien passes it into the capable hands of his jewellery team. Together, they turn his fantastical ideas into a reality… Thanks to presence of Ichien himself at every stage of the creative process, from the idea’s conception to the very final touches made to the all but finished pieces, the connoisseur puts a bit of his soul into every ring, bracelet, necklace and earring that the ICHIEN brand produces.

This probably explains why these bullfinches of diamond, ruby and sapphire seem so alive. As I held them, I wanted to cover the birds with the palm of my hands so as to hold on to them for longer. Look how grandly their pointy wings are unfurled as if ready to launch the birds upwards, allowing them to tear through the air currents and fly on to freedom. That said, they, with their wings outspread, might simply wish to twirl about in the air, dancing in a favourite way that only they can understand. It’s something we’ll never know as the bullfinches, after opening their wings, are now forever fixed in that motion facing one another… so close and yet so far.

I first saw the concept for this design as a drawing on the top of ICHIEN website’s homepage. It immediately intrigued me how the designer had successfully worked several contrasting elements into a single piece. The realistic form of the birds’ reddish black bodies somehow look even more convincing alongside their miraculous wings which are more like those of a moth. 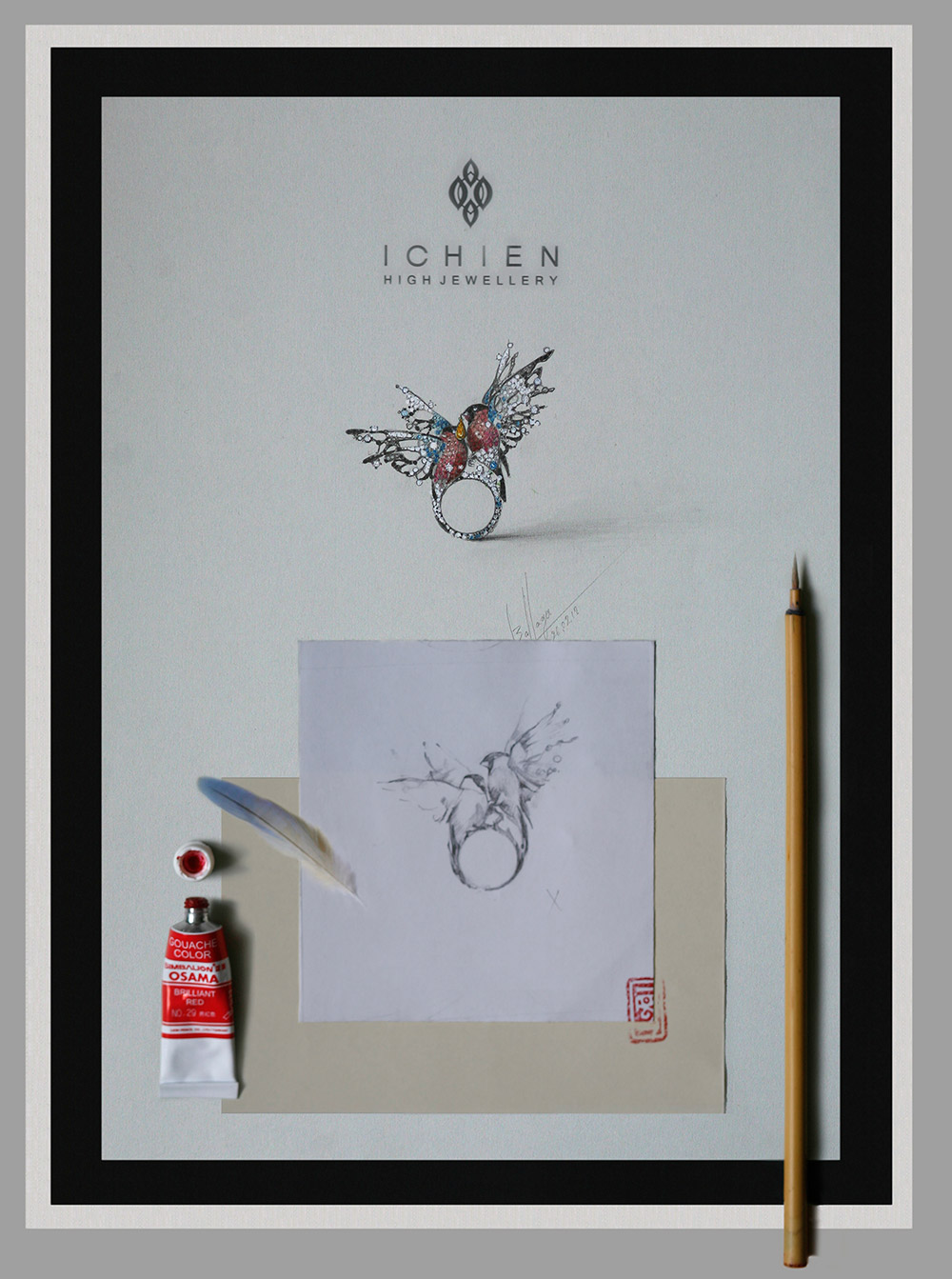 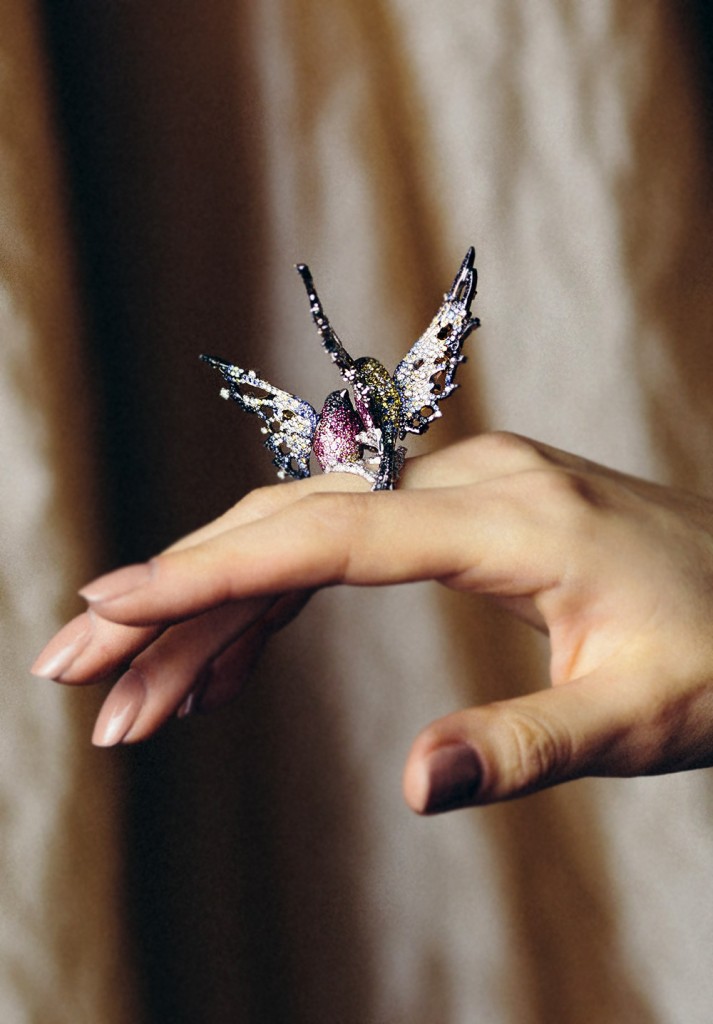 It seems that wasn’t enough for Ichien who, in this work, wanted to blend romanticism (as the birds reach out for each other) with a certain cynicism expressed in the signs of decay on the sharply frayed wings (as if the bullfinches have been shaken by a snowstorm). I have noticed that antithesis is a regular “guest” in Ichien’s high jewellery work. He explains this as follows: “I try to see two things at once: where there is illusion, there is also reality; where there is birth, there is also death. We’ve all got so used to fixating on one thing when we should really be looking at the bigger picture.”

When analysing any piece of high jewellery art, it is not only the front that should be looked at but also the rear side of the piece. If both sides complement each other and are equally well detailed, that is an indication of artistic coherence. Ichien has not left a single millimetre of the ring unnoticed and the romantic motif of the piece knows no bounds: on the side where the ring band touches the base of the finger, the bullfinches’ tails are knotted in a beautifully ornate pattern. This finishing touch is taken from the world of fantasy: the bullfinches have short straight tails and, in ICHIEN’s interpretation, they are like the interweaving spirals of exotic birds.

If you have not heard of the ICHIEN brand before, then the Katerina Perez’s website has served its purpose: to endorse jewels and designers that deserve more attention. I hope you like the ring as much as I do and that you will eagerly read my interview of the artist who has given both his name and a part of his soul to each one of ICHIEN’s creations – coming soon to katerinaperez.com. KP