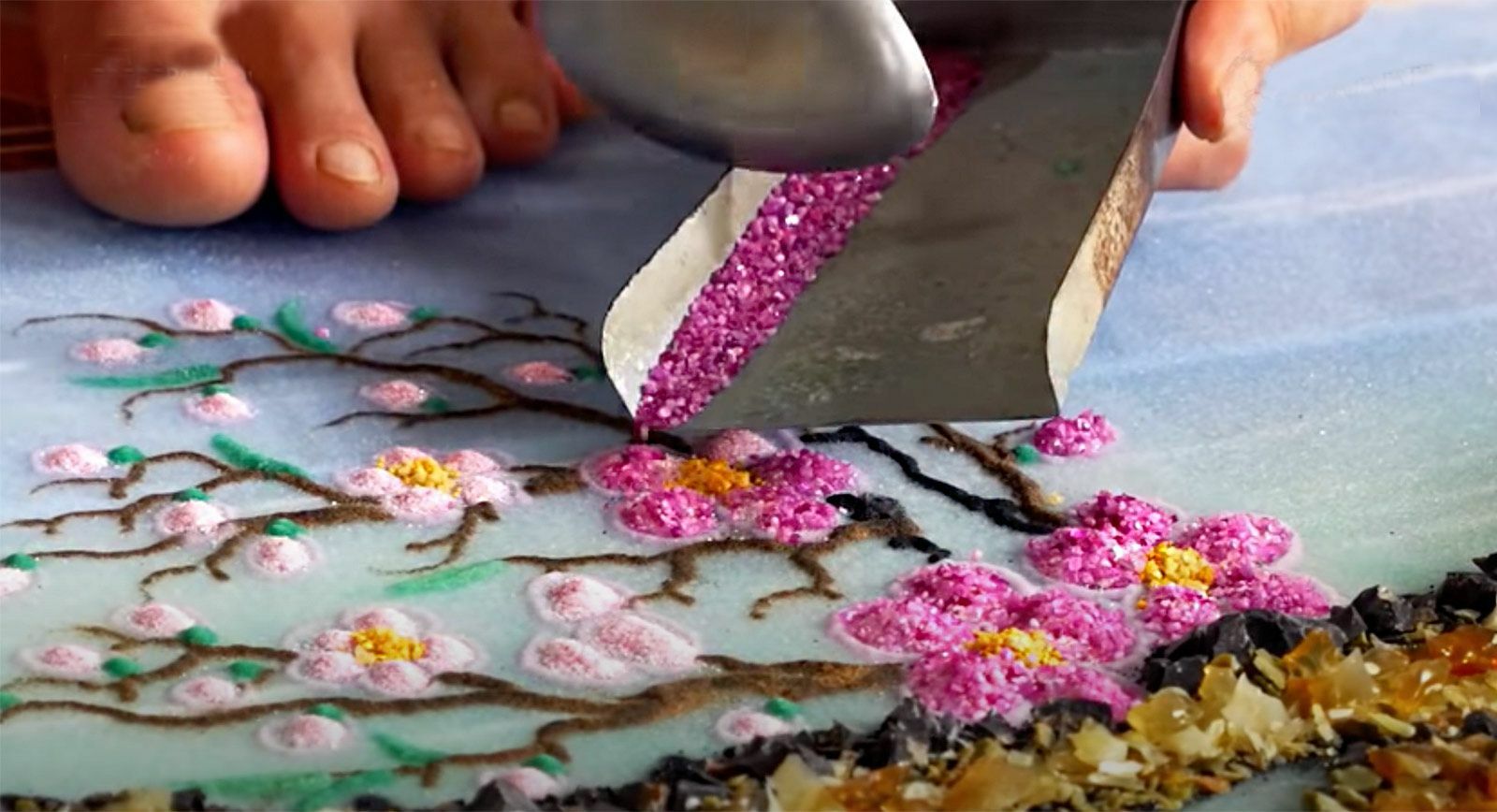 In the Luc Yen province of Vietnam there’s a facet of the gemstone industry that’s the true backbone of the local community: gem paintings. These colourful and meticulously hand-crafted works of art use gemstones sourced directly from miners and dealers, helping to prop-up families as they continue to search for elusive gem-quality material. In my opinion, reader, gemstone paintings deserve far more recognition, not only for their beauty but the important role they play in people’s lives. Fortunately, a new short film on the subject is helping to raise awareness and I would like to share this with you here.

When my friend Vincent Pardieu, an eminent field gemmologist, tells me that something is deserving of attention, I will always listen. In recent months, he has been working alongside a group of talented filmmakers to spotlight the art of gem painting in Luc Yen, Vietnam. The result is a wonderful short documentary film, Gem Painting, which uncovers the craft of using gemstones, both crushed into powders and in their rough form, to create paintings of people, landscapes and magical scenes. 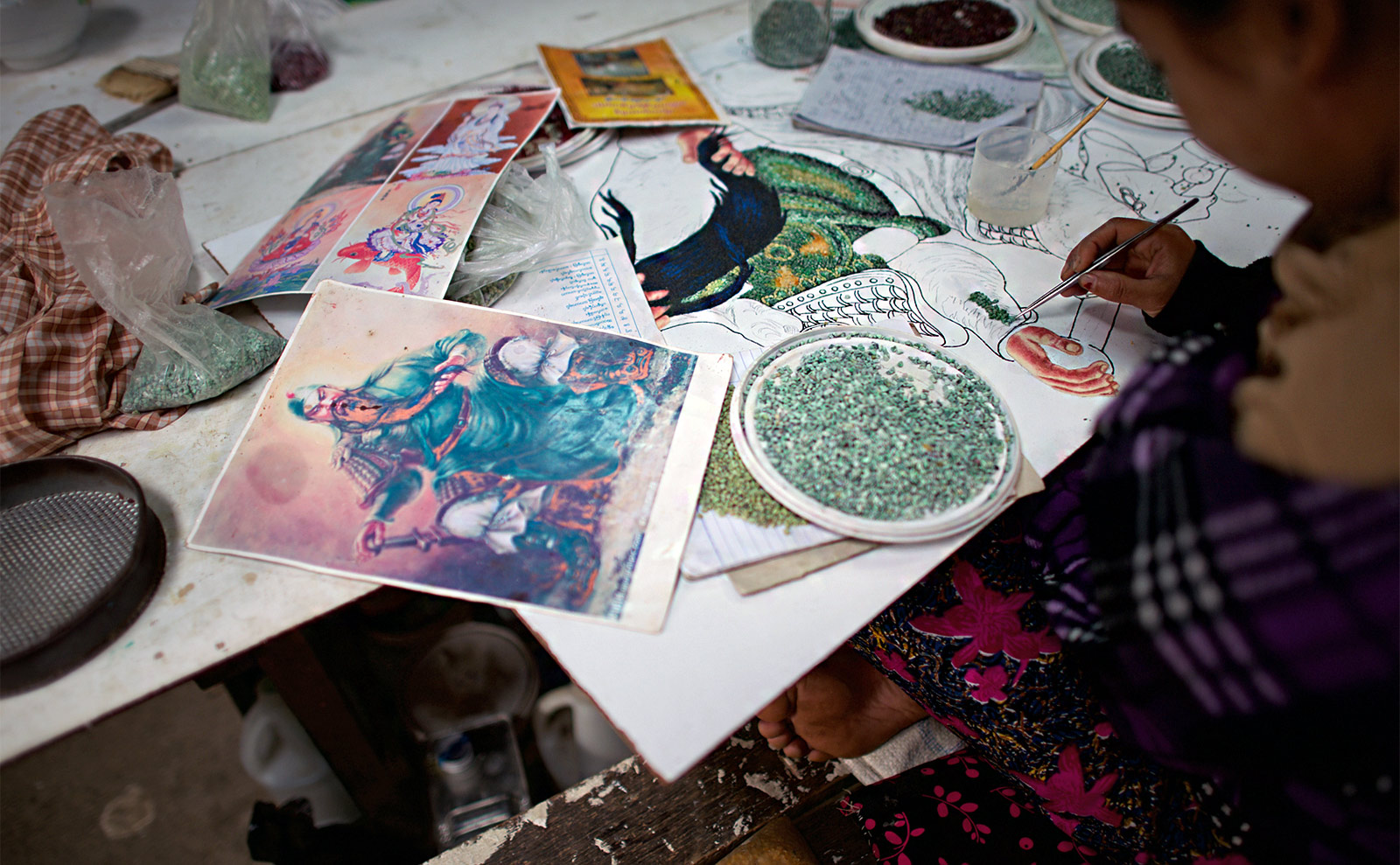 ‘The gem painting technique originated in Jaipur according to Henry Ho, whose family introduced this art in Thailand in the later 1970s. From there, it spread to Vietnam in the 1990s and to Myanmar just before 2010,’ shares Vincent. 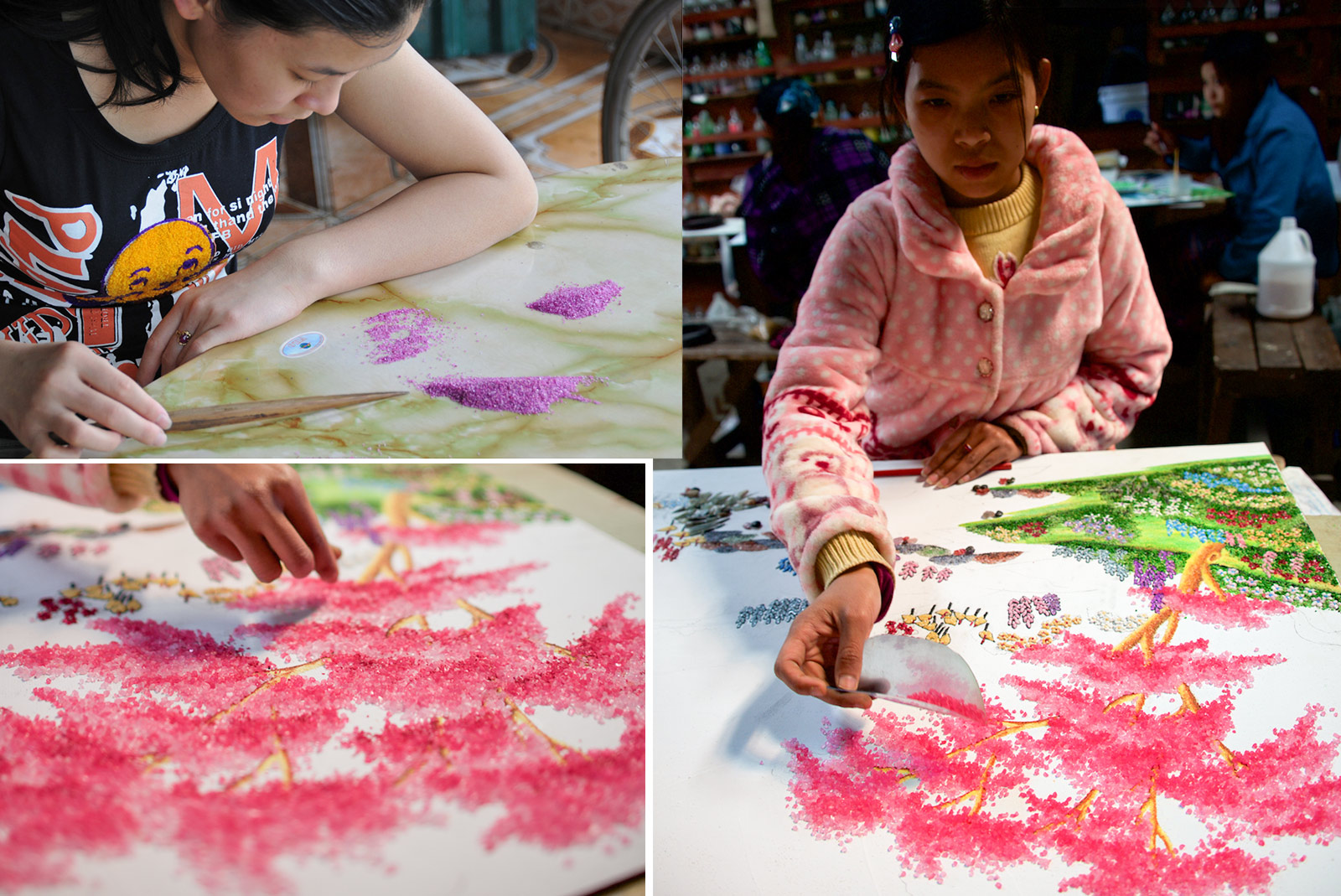 Gem painting has existed for a few dozens of years but, in the context of the gem trades in Vietnam and Thailand, it is still a niche profession. The artists who practice this craft are either self-taught or trained as an apprentice by a fellow gem painter. It’s meticulous, skilled and patient work that requires many hours and days of careful placement of gem materials, whether they’re ground into a silky powder or left coarse as shards or chunks of gems. Remember, this isn’t paint, so colours cannot be mixed to create tonal hues… as one of the gemstone painters mentions in the documentary, if he requires a coffee-coloured shade, he must find gems with that shade. This is the definition of using nature’s colour palette, isn’t it? 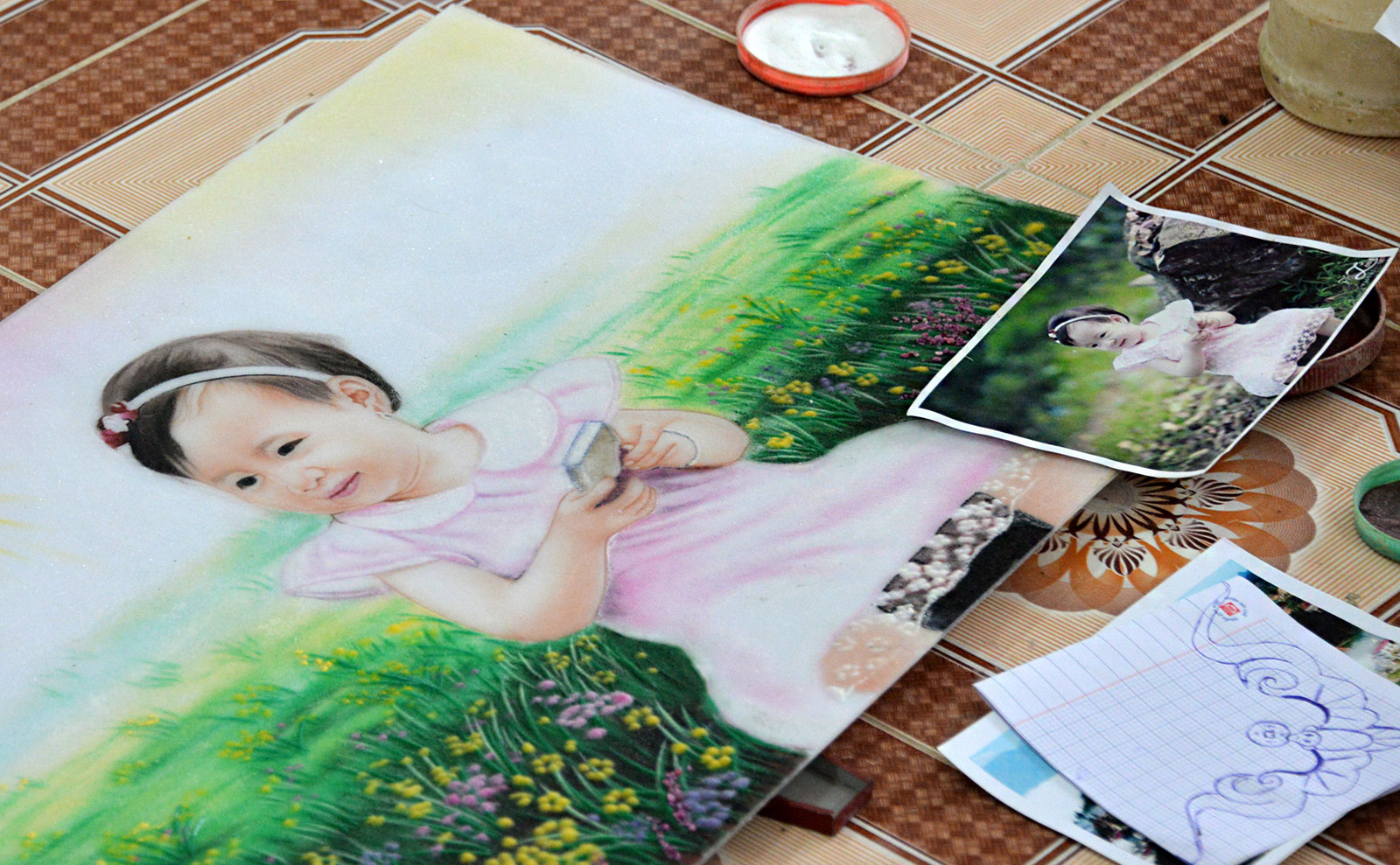 One thing that struck me in the video was the incredible dexterity of the gem painters. Through a tapping motion with a gemstone scoop, they can ‘dispense’ just the right amount of coloured powder onto their canvas. If they are working with larger stones, they must place each one individually over the course of many hours or weeks. Some artists have their own specialisms, like creating skin and facial features (the most challenging part of gem painting), and they work together to complete human portraits that are remarkably photo-realistic. 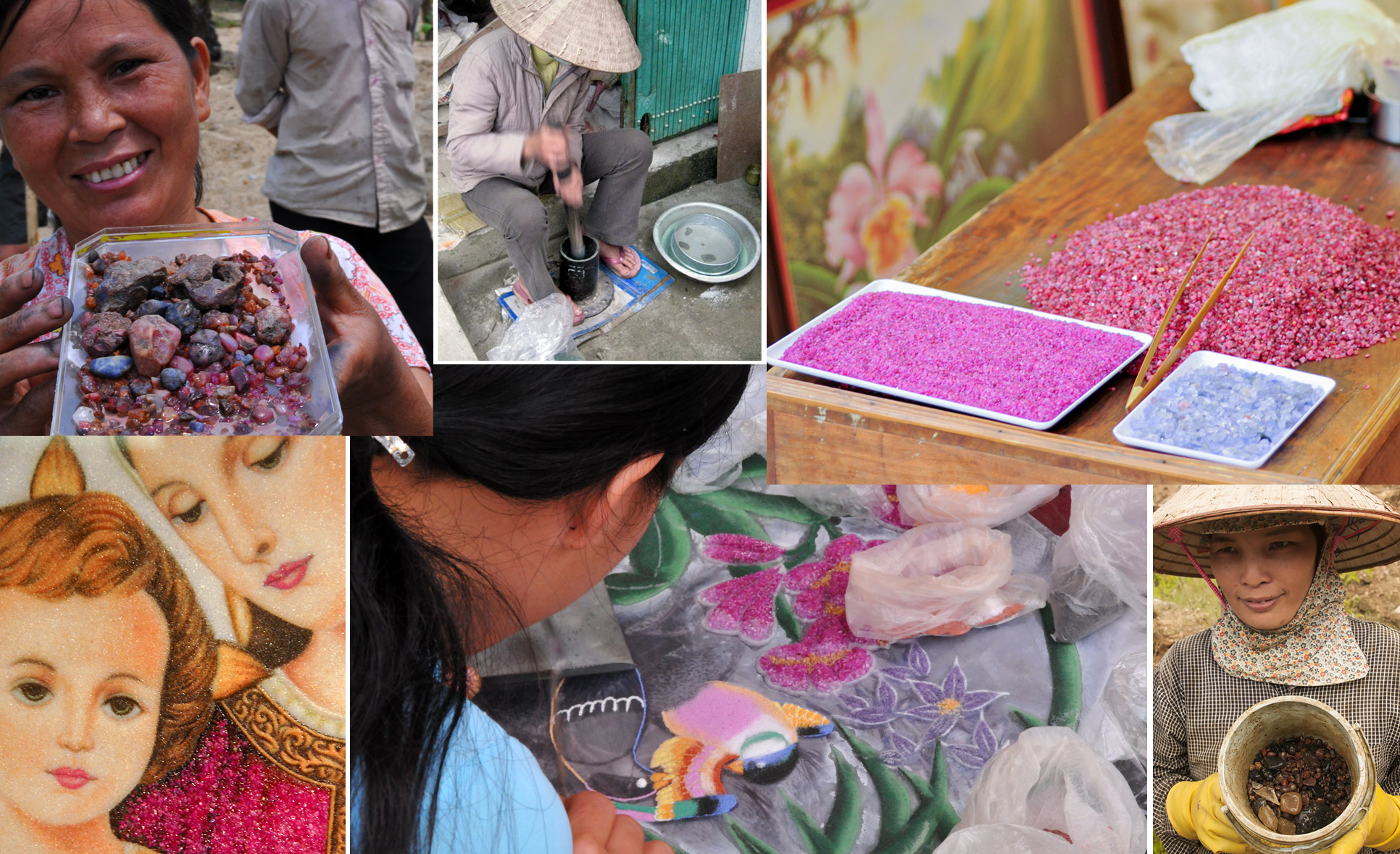 There are a surprising number of stages in the gem painting process, starting with buying gemstones direct from mines and local dealers. These must then be sorted and classified by quality, size and colour. Next the stones are crushed, and the resulting powders are used to create an image based on a line-drawing or an existing photograph, like a family members’ face or a vase of flowers. Once all the stones are in place, transparent glue is added and the whole thing is left to dry. The final stage is washing the canvas to bring out the natural intense colour of the gemstone pigments. It was wonderful to hear gemstones described as “eternal” materials in the film, referencing their durability, the longevity of their colour and the fact that, with care, the image they form will stay intact for many generations to come. 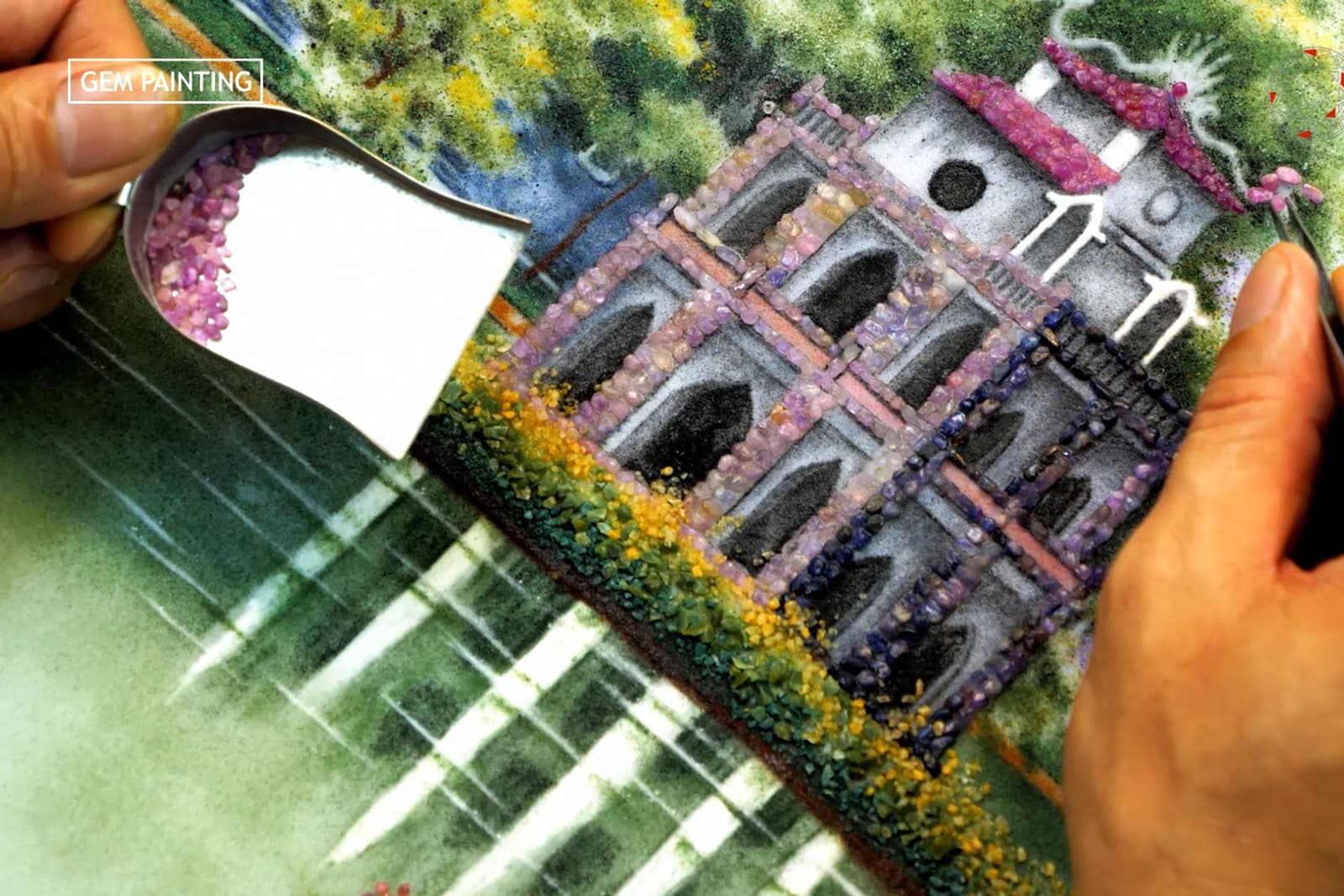 What is so perfectly articulated in the film, however, is the important place that gemstone paintings play in the ecosystem of Luc Yen: imagine a cog in a grand machine that simply would not work without it. This artistic industry isn’t just producing artworks, it is helping local communities thrive and find a home for the gemstones they unearth that can’t be used in jewellery. It provides a steady source of income and creates more transactions and competition among gemstone miners, dealers and painters, which is good for local economies. Plus, every new painter who enters the profession is part of a community and can develop his or her own specialism and share their skills. In a county like Vietnam, where gemstones play such an important role, the thriving gemstone painting industry is an example for countries in a similar position to follow. 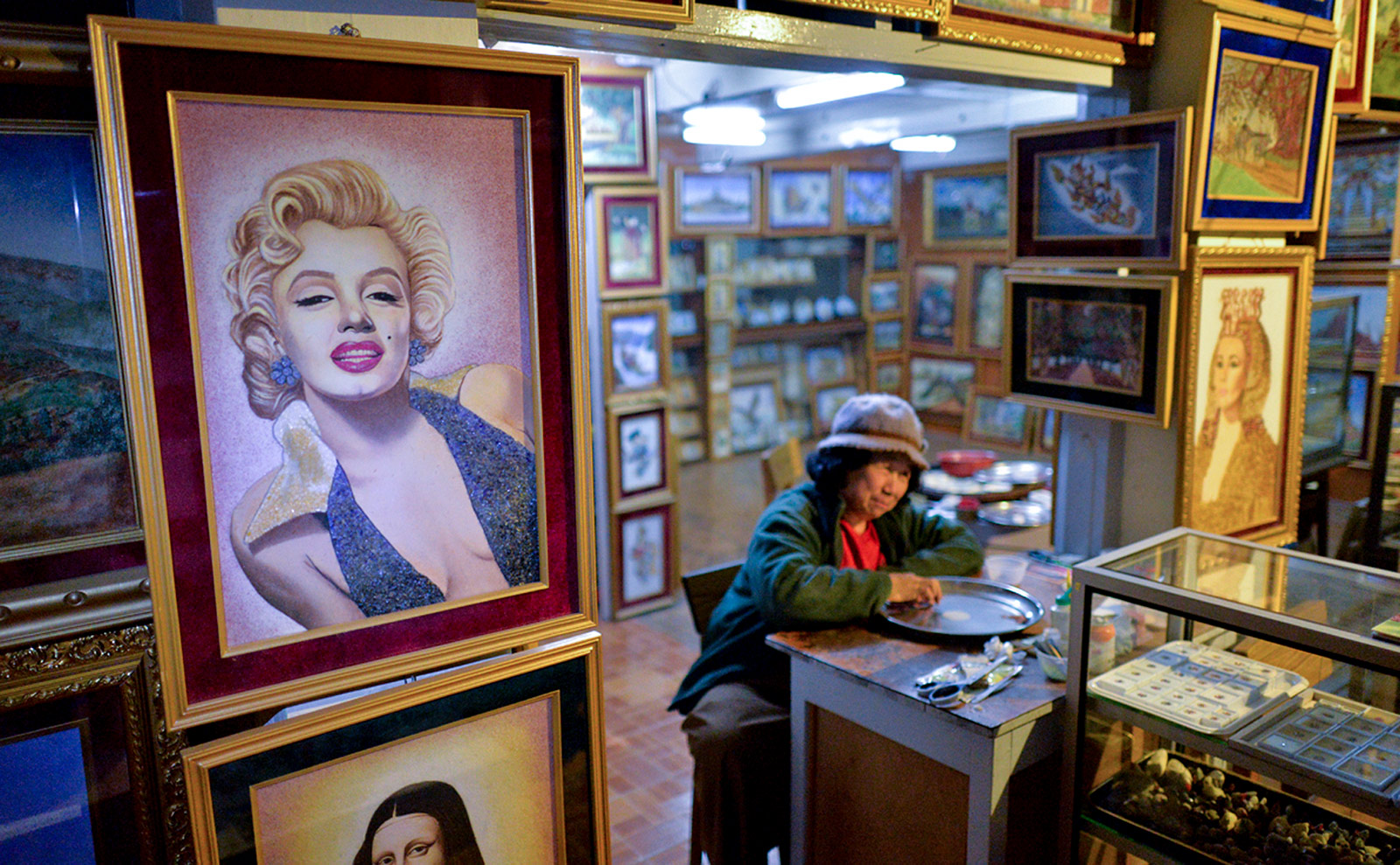 And it’s not just people like me who are beginning to appreciate this art form. Gem Painting recently won the award for ‘Best Short Documentary’ at the Paris Film Festival. 'I decided to produce this film and asked my old friend Philippe Brunot, the author of “Follow the Zebra” documentary, to work on the project with me. The result was first presented at the ICA Congress in 2019 as an illustration of my talk about the benefits of gem paintings for mining areas, and after Philippe submitted it to the “Paris Film Festival”, shares Vincent. 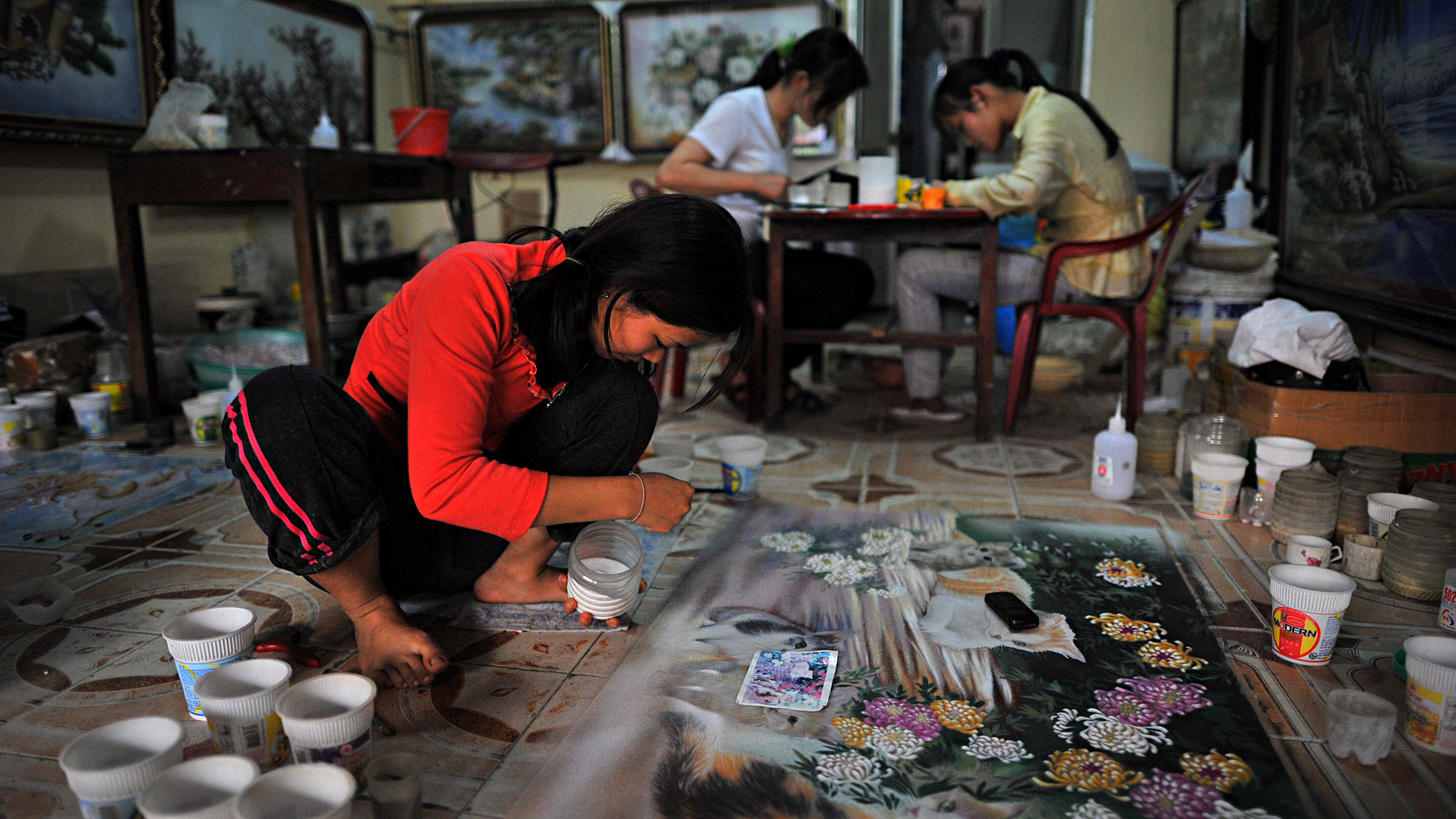 This award means that the story of  Luc Yen’s artisans is reaching an even wider international audience and Vincent hopes that “this award will enable gem paintings to get more visibility and that this will enable the art to spread to other gem-producing areas. I believe that it could be a great tool to support local communities near the gem mines, as gem painting will provide miners with regular income from their daily production and will enable them to keep going and be more likely to find, from time to time, that exceptional facet quality stone they dream to find.”

SPECIAL THANKS: VINCENT PARDIEU FOR PROVIDING ALL PHOTOS