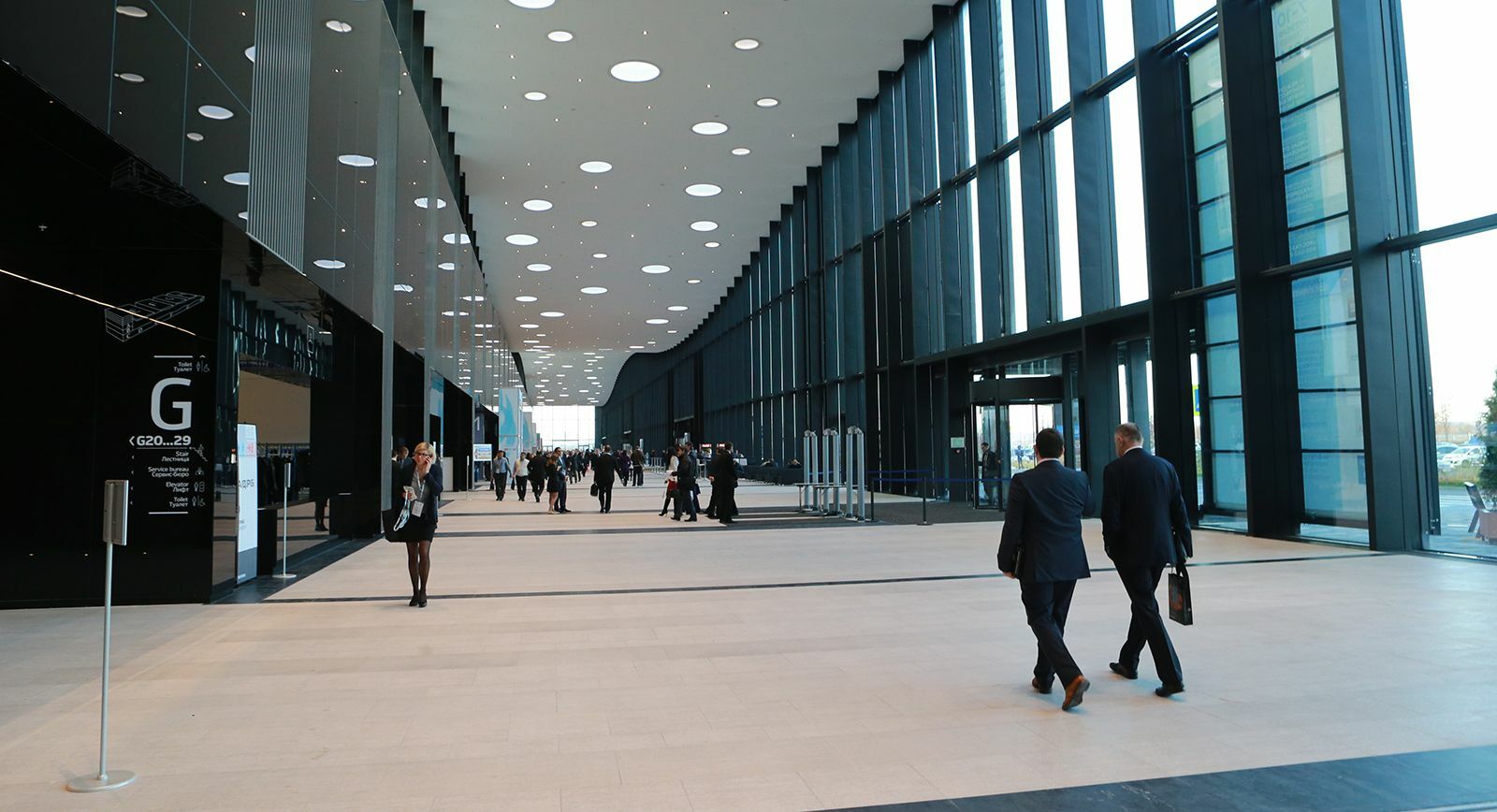 Between 4th and 8th February the Junwex annual jewellery exhibition took place in St Petersburg. I visited it for the first time to find out about the latest work by tsome Russian designers and companies, and as usual I have selected ten of the best pieces to write about here.

Before we get on to talking about the best of the jewellery, I want to tell you a bit about the exhibition itself. It took place in the new Expoforum building, which held the event as part of its efforts to get itself on a level with the scale of the big European shows and open up the event space to more exhibitors. The exhibition complex itself is very large so the organisers of Junwex split the room into three halls. In the first hall a number of big companies set up closed-off salons; in number two private jewellery studios displayed their work, along with brands who have points of sales around Russia; and the third hall taken up by independent designers and small businesses whose jewellery was of interest to individual customers rather than wholesale buyers. 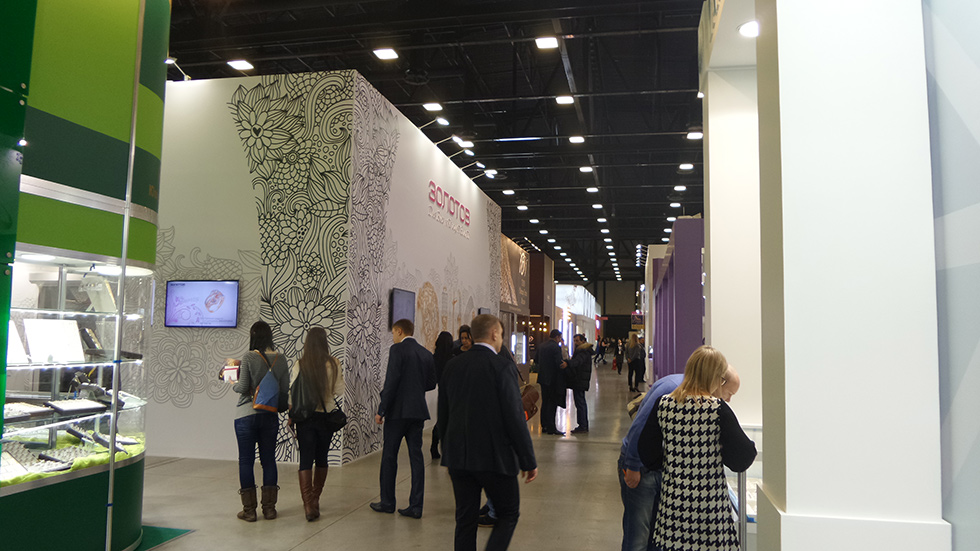 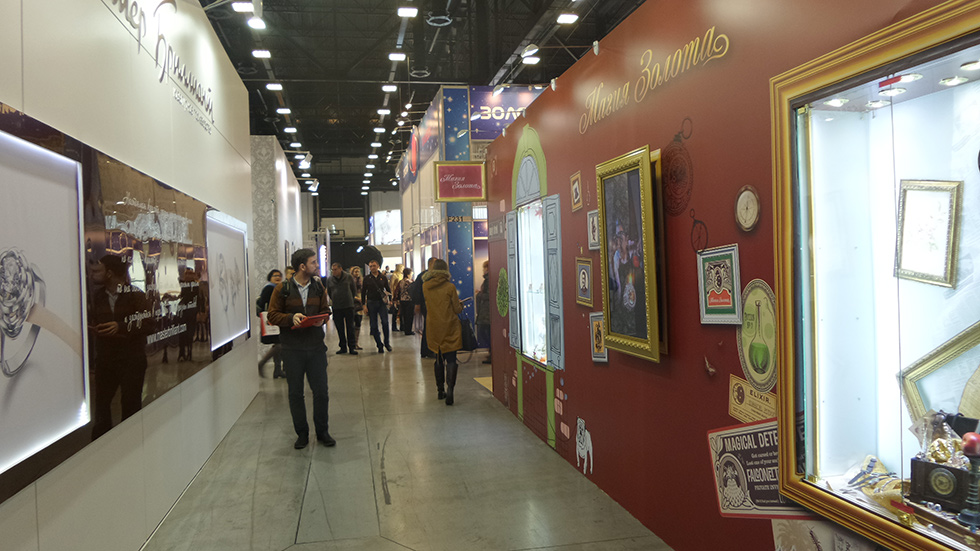 The exhibition itself was frequented not just by people directly connected with the industry but also by jewellery aficionados interested in making individual purchases. On the 7th and 8th they took the stalls by storm, desperate to get their hands on something they liked.

The first piece of jewellery to be included in the TOP10 is the Gevorkyan ring from the Symphony of Colour collection with a luscious 3.5 carat green tourmaline. 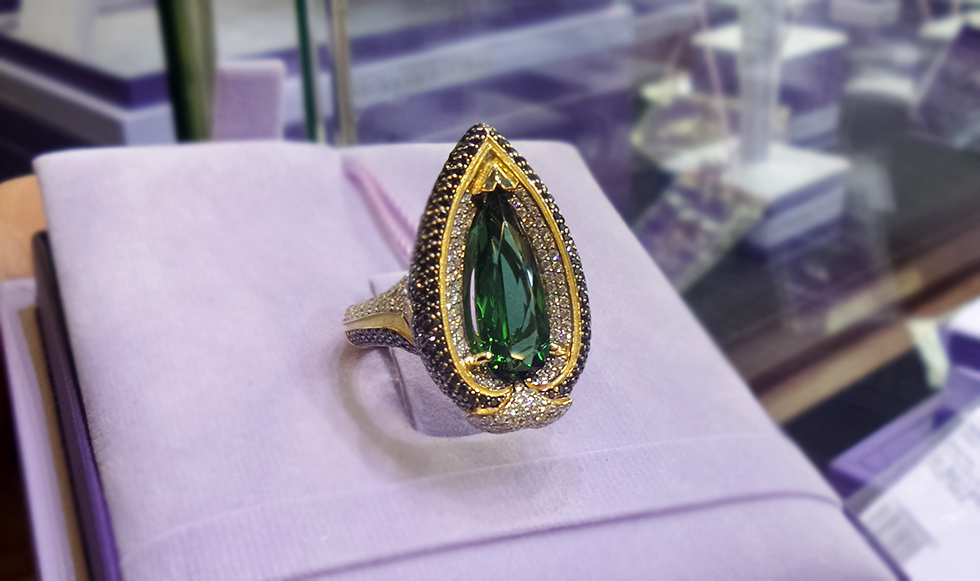 The Sarkisian ring also owes its place on this list to a tourmaline, but this one has a polychrome stone. I liked that the body of the cocktail ring is decorated with multi-coloured sapphires that mirror the changes in colour on the central stone. 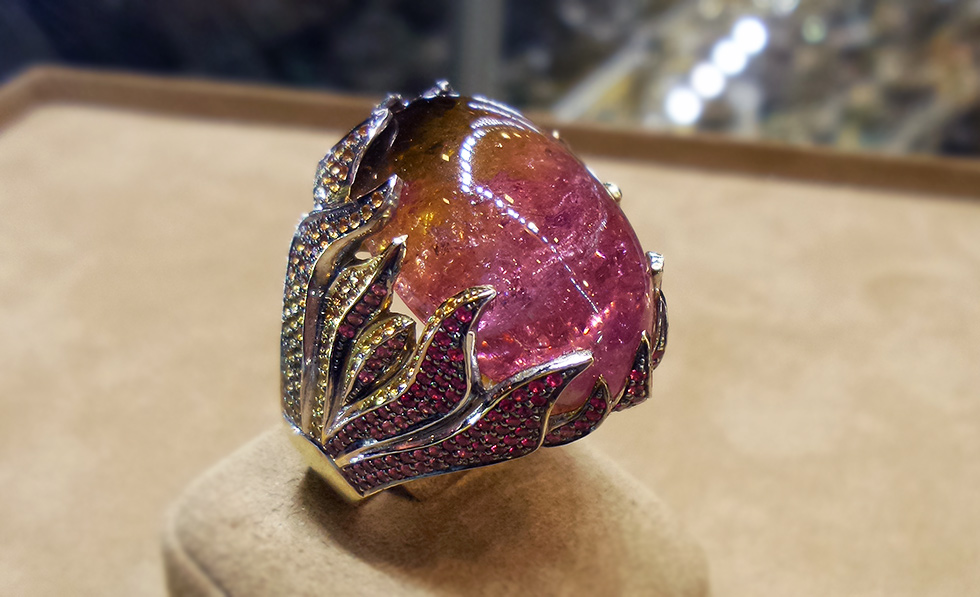 I just couldn’t leave out the third piece on the list, even if it is technically artwork rather than jewellery. Each one of the silver figures on the Battle on Ice chessboard has been crafted with precision and carries a nominal reference to Russian history. It is hardly surprising that that Amber Kostroma’s chessboard took first prize at the Junwex awards last year. 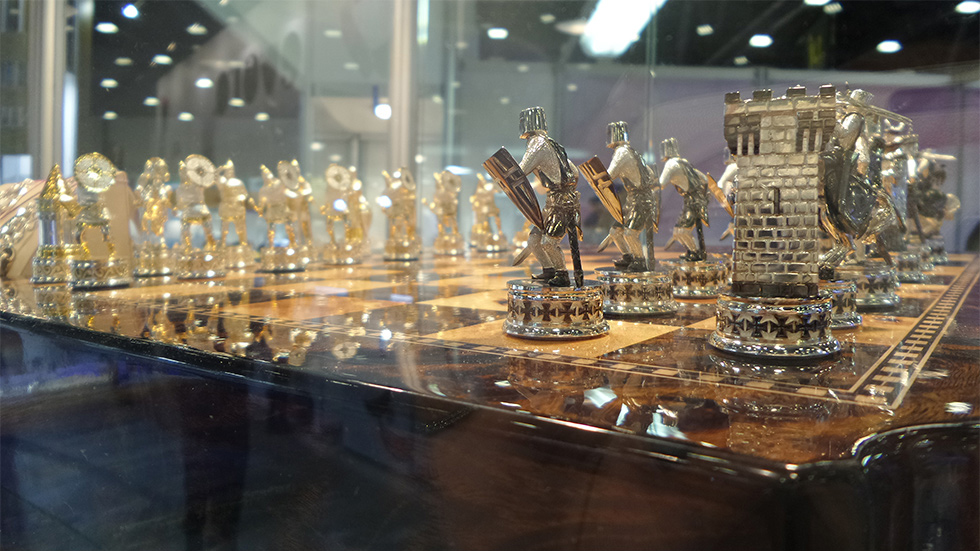 Practically all of Igor Orlov’s work is sculptural – it is very much his forte. A jewel for him – the Dragon ring that features a 1.37 carat ruby, forms part of his Different People collection, which represents the seven different types of man. Igor earns his place in the top ten through his interesting idea, complex design and beautiful execution. 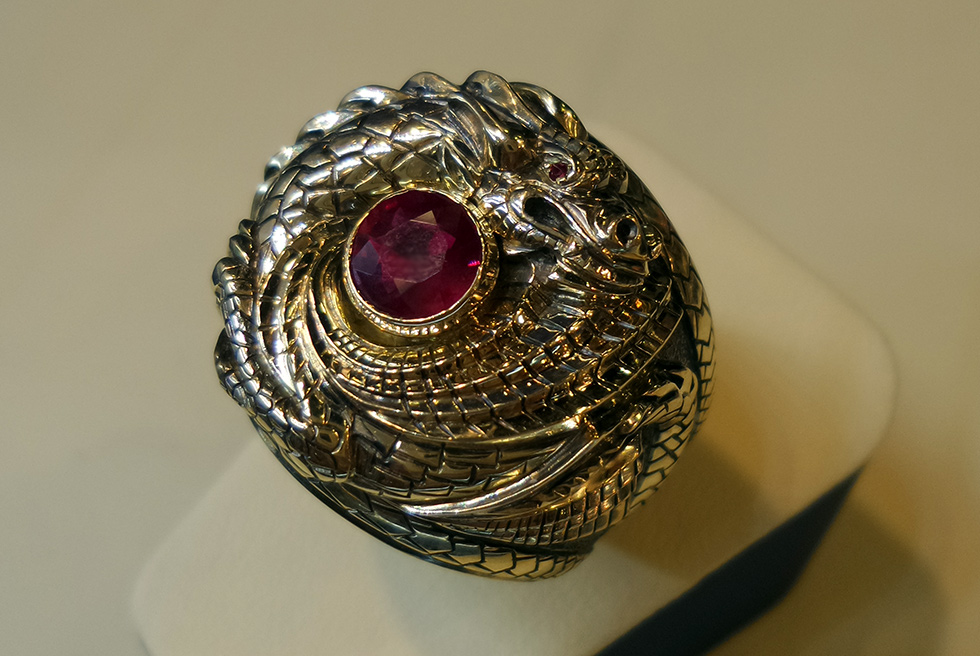 The thing that made me choose the Small Business necklace, made out of bronze and brass by Andrei an Anna Zuev, students at the jewellery school of Shape and Form, was its humour. The smile that lit up my face when I first laid eyes on this amusing little sheep design would be worth any number of diamonds. 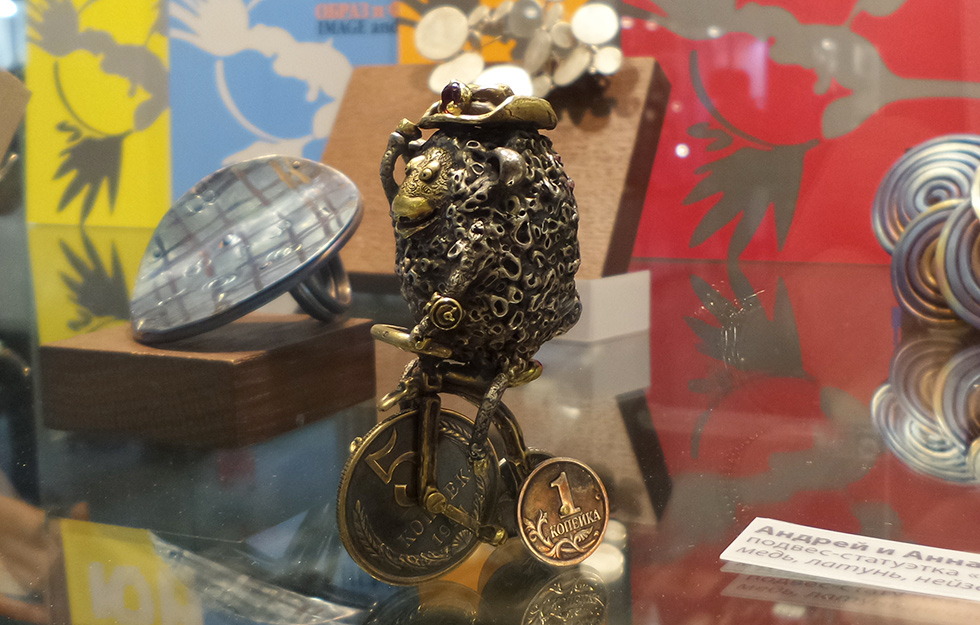 A pair of gold earrings with enamel, tourmaline and diamonds from the collection Scenes from the Russian Ballet by Sasonko just had to be a favourite. Light and fine, they perfectly match the theme, and their geometric decorative enamel element call to mind a pair of ballerinas. 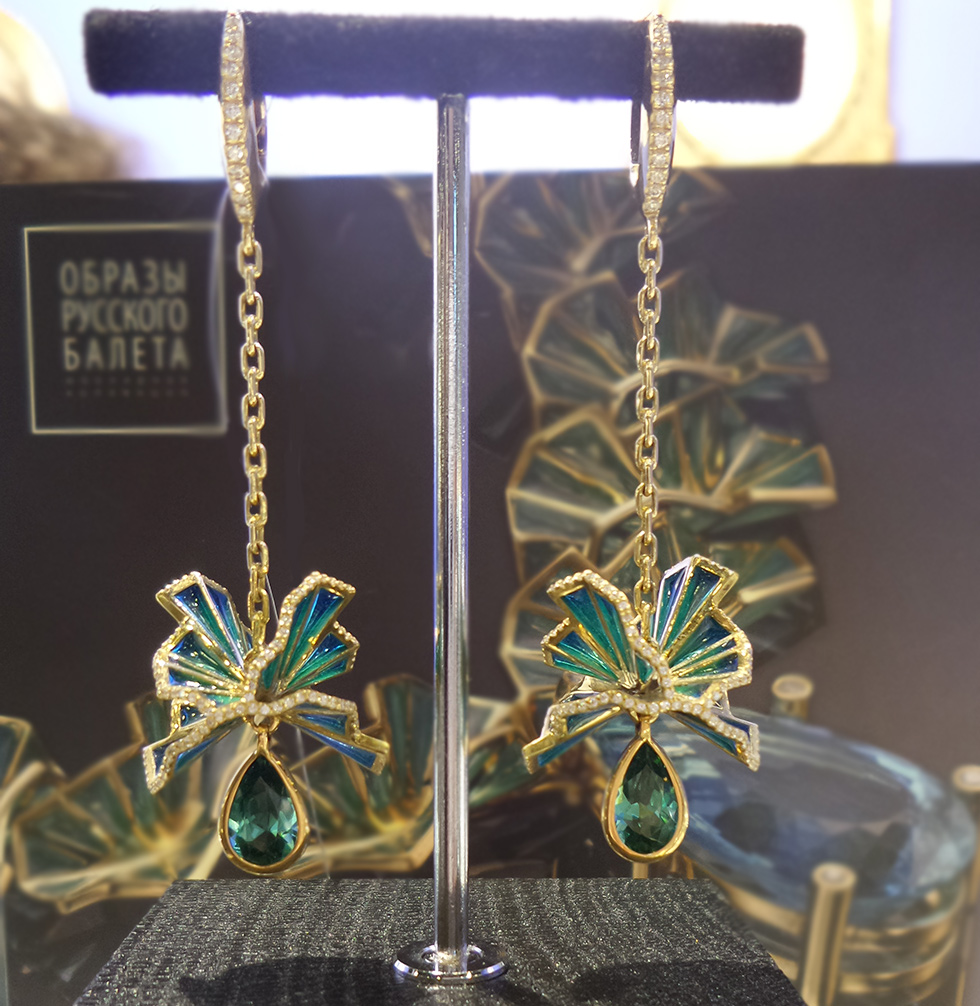 Mark Baldin is one of few jewellers in Russia to work with titanium. Titanium is a metal which is very difficult to work with, so the carefully realised patterns on the wings and body of the insects demonstrate the designer’s outstanding technical skill. You could say that the Ladybird brooch is a refined interpretation of the Steampunk trend. 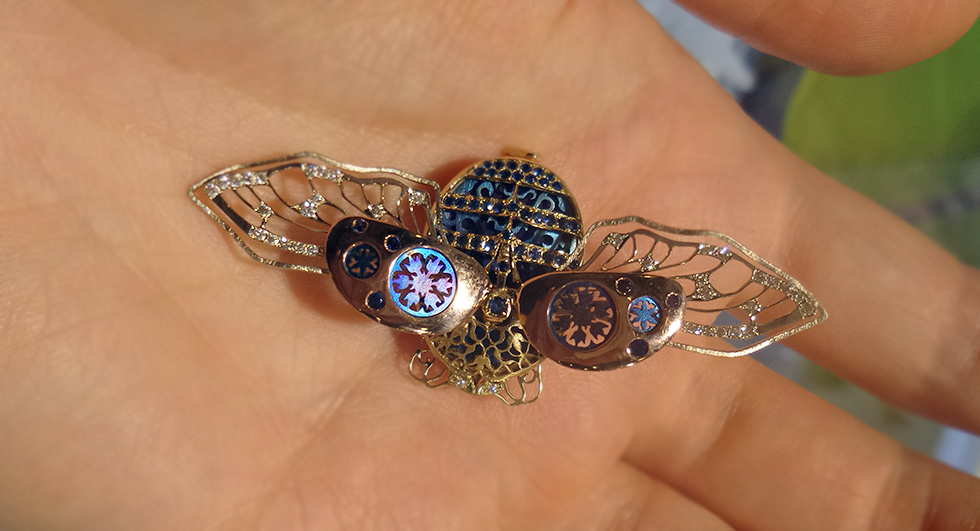 Practically all of the A.R.T Collection from Yekaterinburg stand was taken up by statuettes skilfully cut from ornamental stones. A few pieces of jewellery quietly stood out from the rest, one of which, a medusa with a 12.35 carat star sapphire, it would be hard not to include in the top ten. This piece combined a rare precious stone, an original idea and excellent craftsmanship. 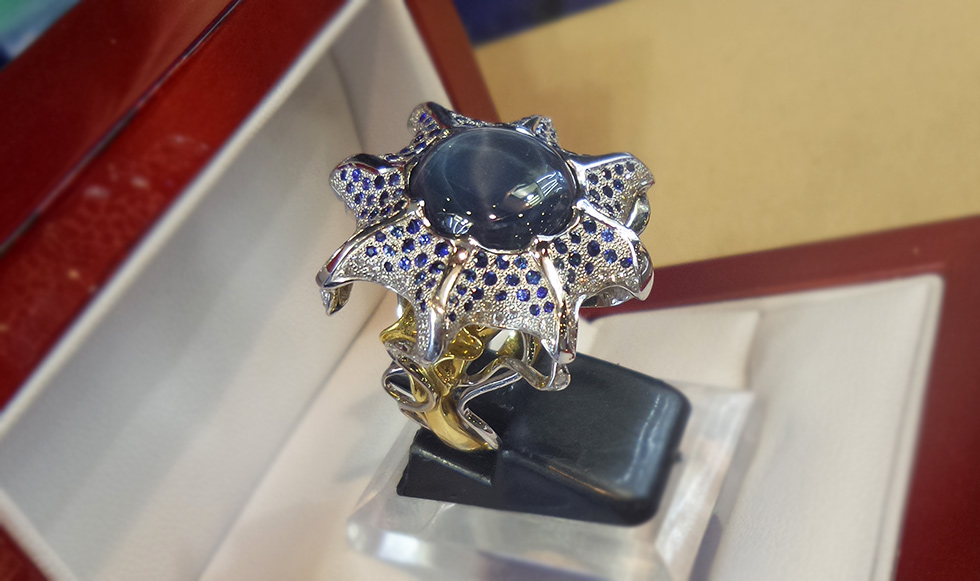 The designer brand Chrysos have had the interesting idea of making a pair of rings: Mars and Venus. The ring for her, made with a magnificent Ethiopian opal, beautifully complements the Australian analogue of the man’s ring. Symbols of the origin of man and woman have been woven into the ring’s complex design of the shank. Mars and Venus designs are featured on the cover of the box which was specially made to store both rings at once. 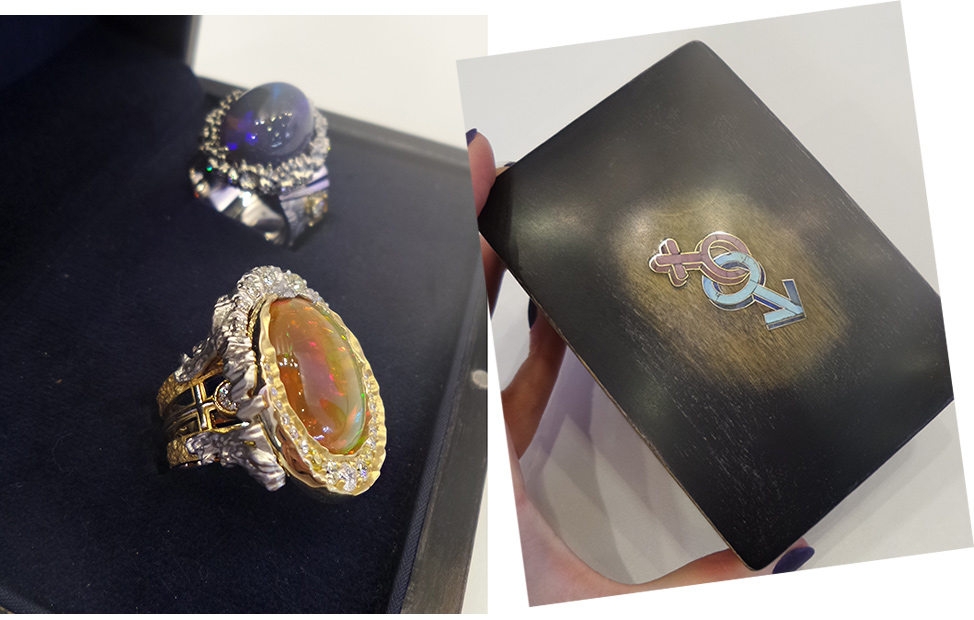 It was very hard to choose one favourite from the Mousson Atelier stand: they were all so different and beautiful in their own way. In the end, the winner as far as the list is concerned was a brooch studded with diamonds and sapphires. The veining all looked very natural and the transition of colour between the precious stones created the illusion that you are holding in your hands an autumn leaf freshly fallen from the tree. 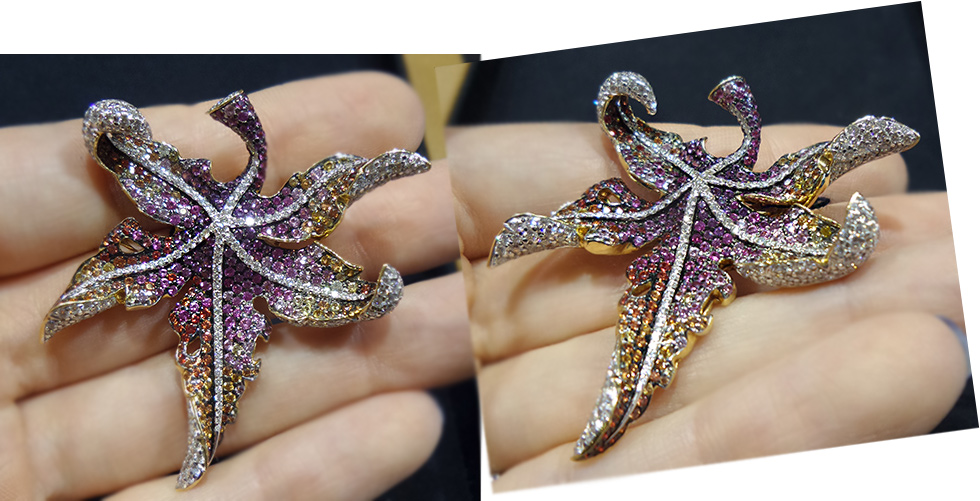 The ten pieces of jewellery which I have talked about here are by no means the only ones worthy of note. In picking my favourites I have tried to convey the sheer variety of the jewellery and art on offer, created by masters of the industry from all over Russia.