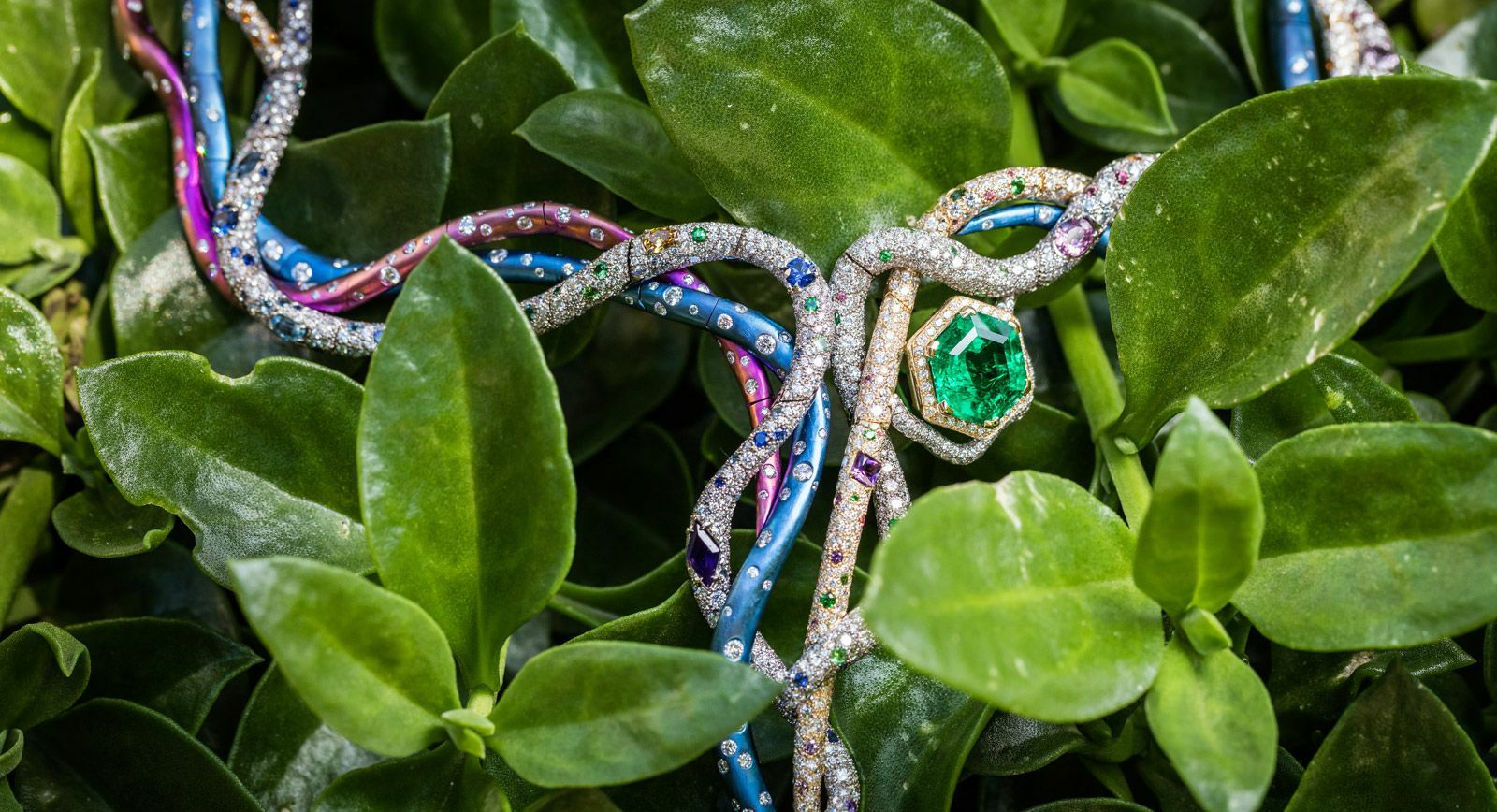 For several years now, I have observed a certain trend in jewellery art: a tendency has emerged for designers to expand collections after their initial launch. This is hardly surprising - the jeweller reveals an exciting, multifaceted theme, and finds themselves wanting to return and delve further into the potential of the collection. Last year, the Moroccan jewellery house M Haute Joaillerie presented 9 unique new pieces inspired by William Shakespeare’s ‘A Midsummer Night’s Dream’. Earlier this year, two new pieces of the collection came to life, which I was invited to see for myself in Marrakech.

Before I discuss the jewellery, I’ll briefly elude to how the collection - conceived of by Her Royal Highness Princess Lalla Meryem of Morocco - came to fruition. Borrowing motifs and characters from the canonical play ‘A Midsummer Night’s Dream’, the country’s finest jewellery maestros created an enchanted world in which the trees, flowers and forest dwellers were the featured characters. With the help of magic spells, these enchanted creatures bring about the ultimate triumph of the protagonists’ true love.

One of the protagonists of the play is the forest spirit Puck, a character taken from English folklore whose role – heightened in this particular work by Shakespeare - plays the trickster, the prankster and loveable rogue. It is Puck’s cunning face that is depicted gazing at a miniature fairy at work on the dial of the first ever tourbillon pocket watch by M Haute Joaillerie. 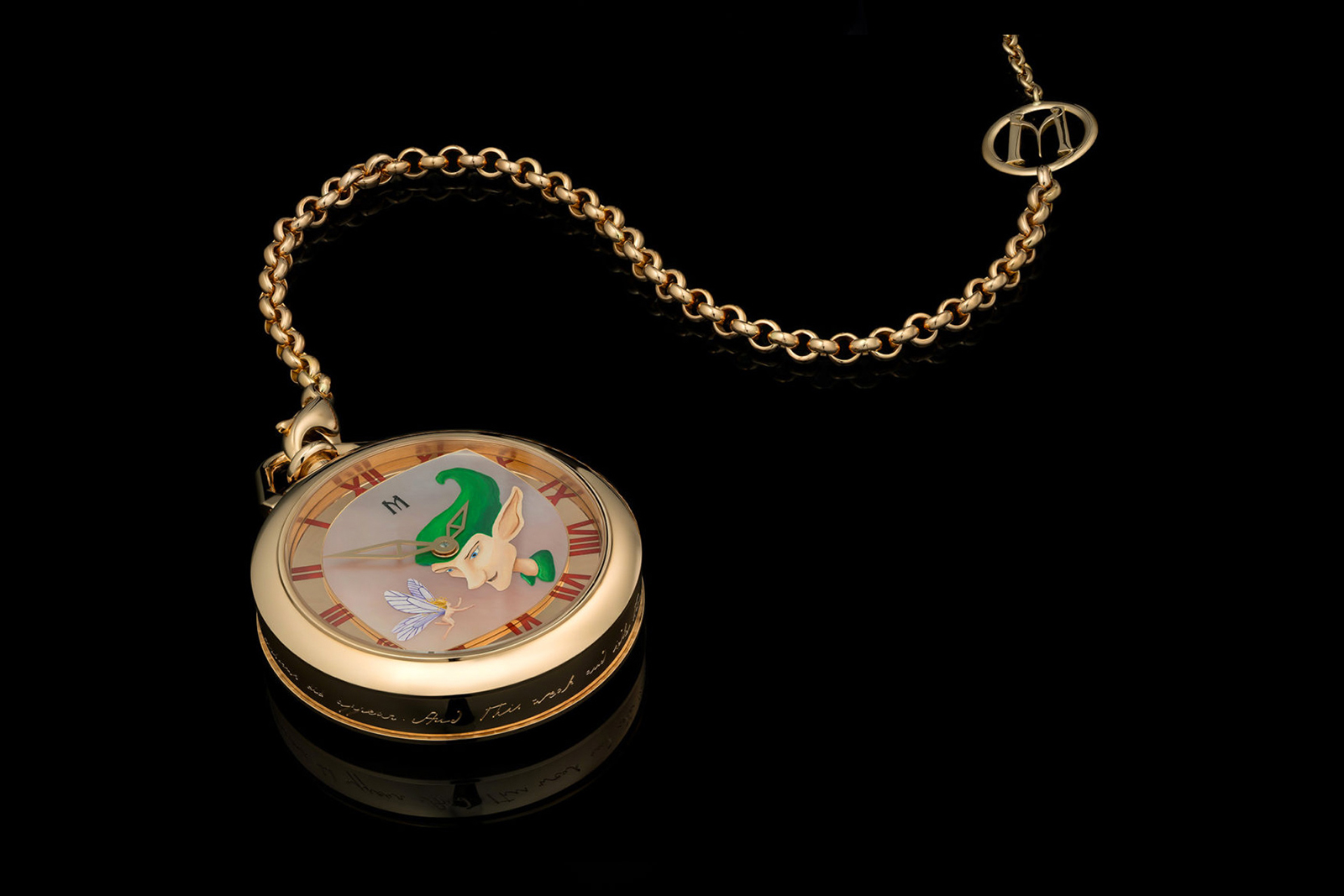 This enamel image had to be produced so neatly that the process could only be done by hand. Therefore, to bring HRH Princess Lalla Meryem’s idea to life, M Haute Joaillerie representatives travelled from Morocco to Switzerland. Switzerland is known for having a high number of expert enamelers, whose high standard of work is renowned worldwide. One of them, Blandenier, was chosen to paint the mother-of-pearl disc of the Maison’s first fine jewellery watch. Look closely at the dial and you notice something… unusual. Yes, the Roman numerals are all present, but in what order?

“All of the numbers are positioned counter clockwise, so they are written the opposite way to what we’re used to, and the hands move anti-clockwise too. Therefore, when we set the time, the hands wind backwards. This unconventional way of telling the time was inspired by Puck’s reputation as a trickster. 'With this watch your perception of time is being played with',” says Her Royal Highness. 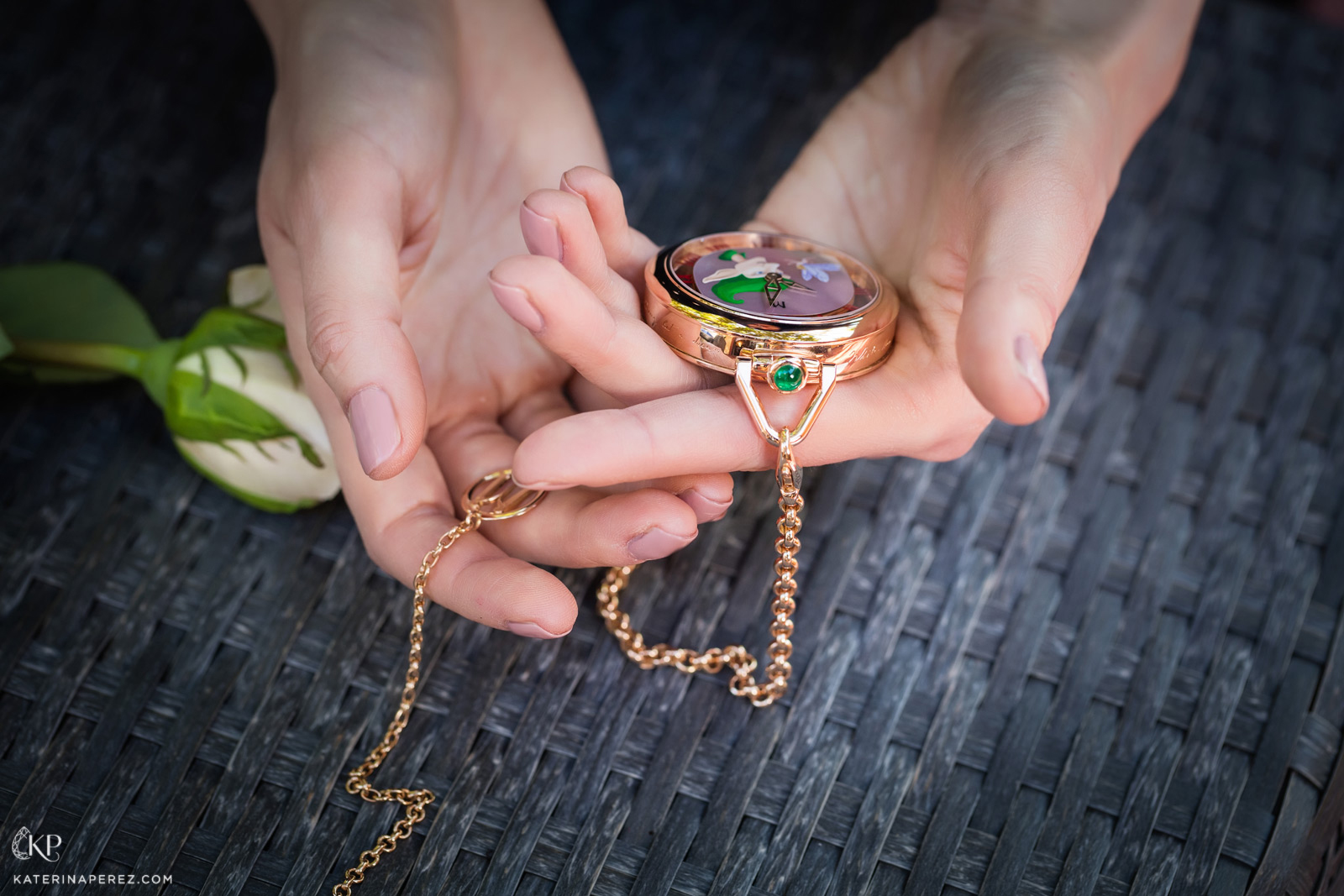 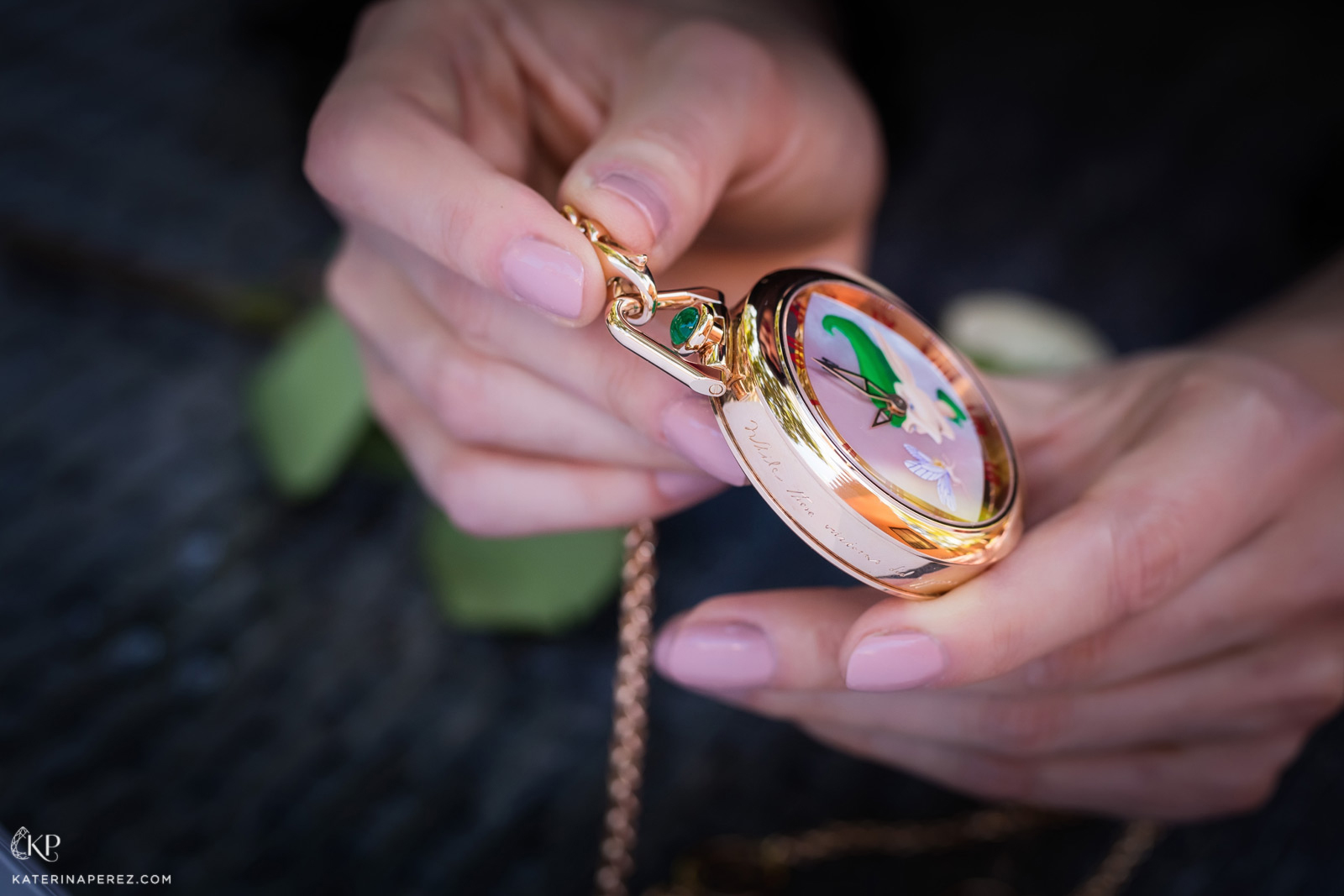 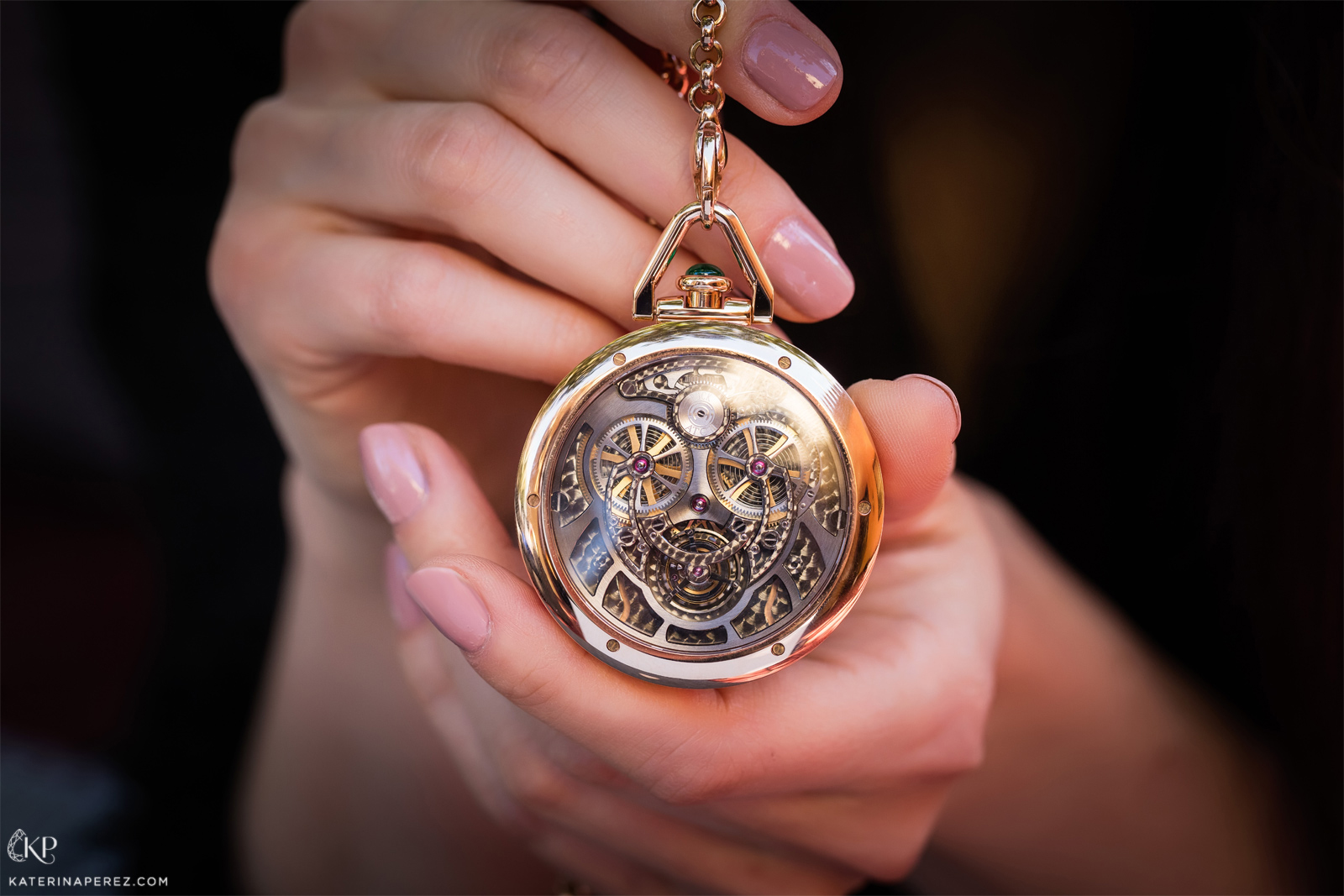 Every millimetre of the watch is bedecked in unique features. If you turn the tourbillon sideways and look at the 18-karat pink gold bezel, your gaze is met by a delicate handmade engraving - the final lines of ‘A Midsummer Night’s Dream’: “While these visions did appear … No more yielding but a dream.” Rotate the watch even further and you will see a fastener for the chain, embellished with a cabochon emerald.

The watch was manufactured in Switzerland by Armin Strom - who M Haute Joaillerie chose for their modernity and understanding of luxury. It is a younger brand that they felt had a similar spirit and was capable of translating their ideas. 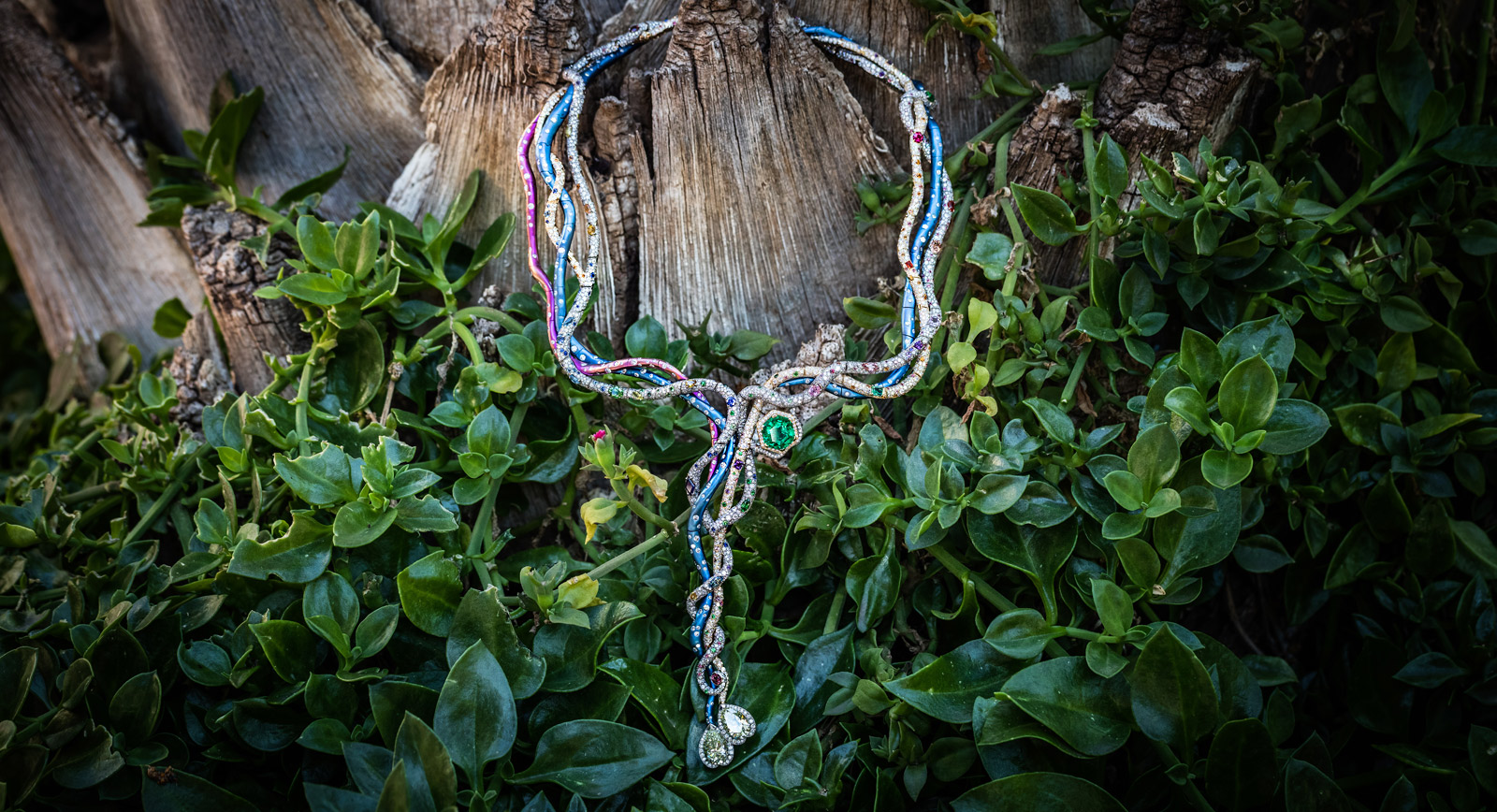 Next, I turned my attention to the Titania necklace, dedicated to the queen of the fairies. Made from various shades of titanium and gold, its surface is covered with a myriad of brightly coloured gems in a cacophony of cuts. Hexagonal emeralds, sapphires, spinels, tsavorites, amethysts, tourmalines and, of course, diamonds encrust the vines that creep around the neck. Interwoven among them, branches descend the neckline led by two pendants, both large yellow pear-cut diamonds. One cannot help but notice that the shades of every individual stone have a unique vibrancy, even those which are modest in size. Later, I discovered that the smaller gemstones with the most saturated colour are the most difficult to find. 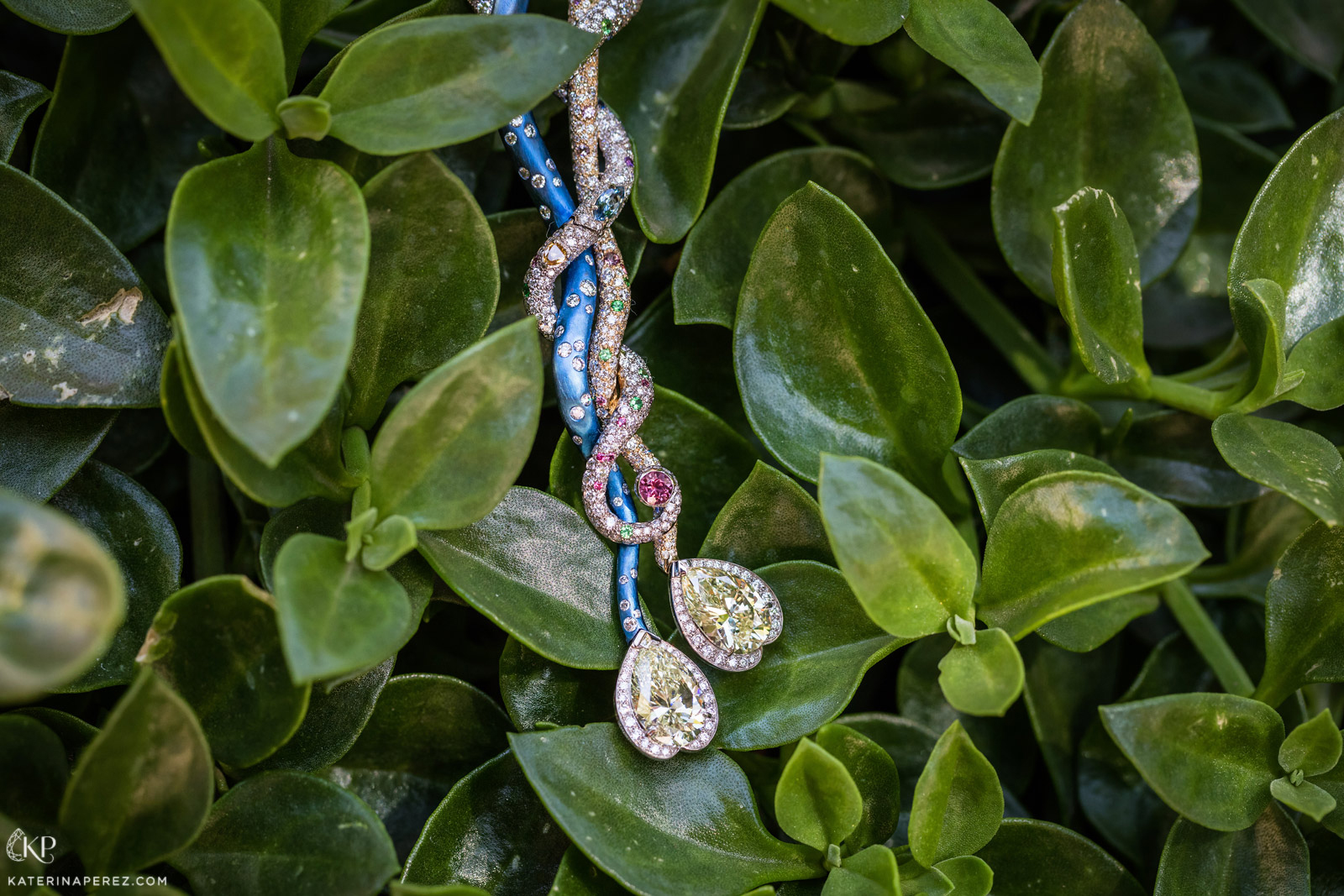 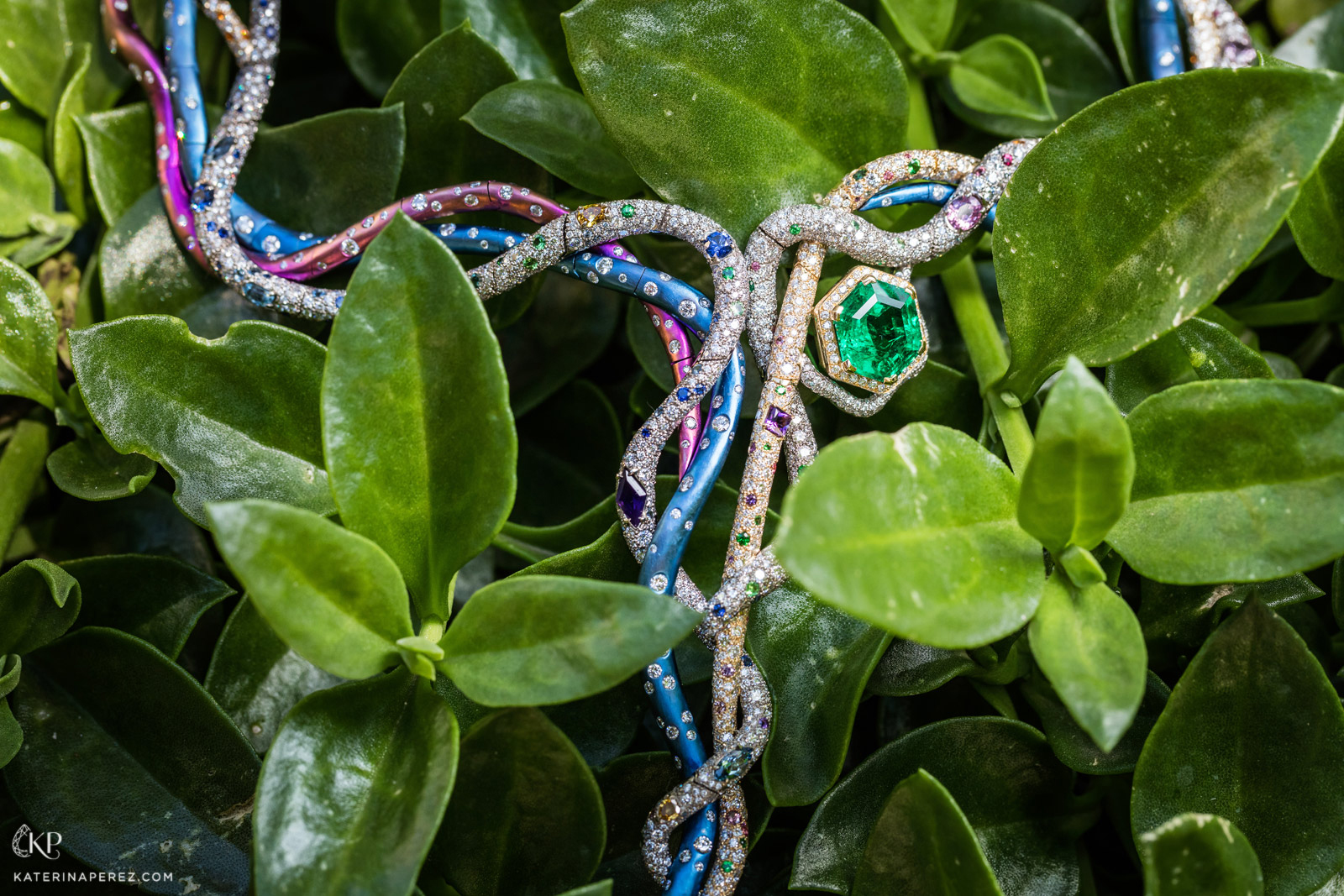 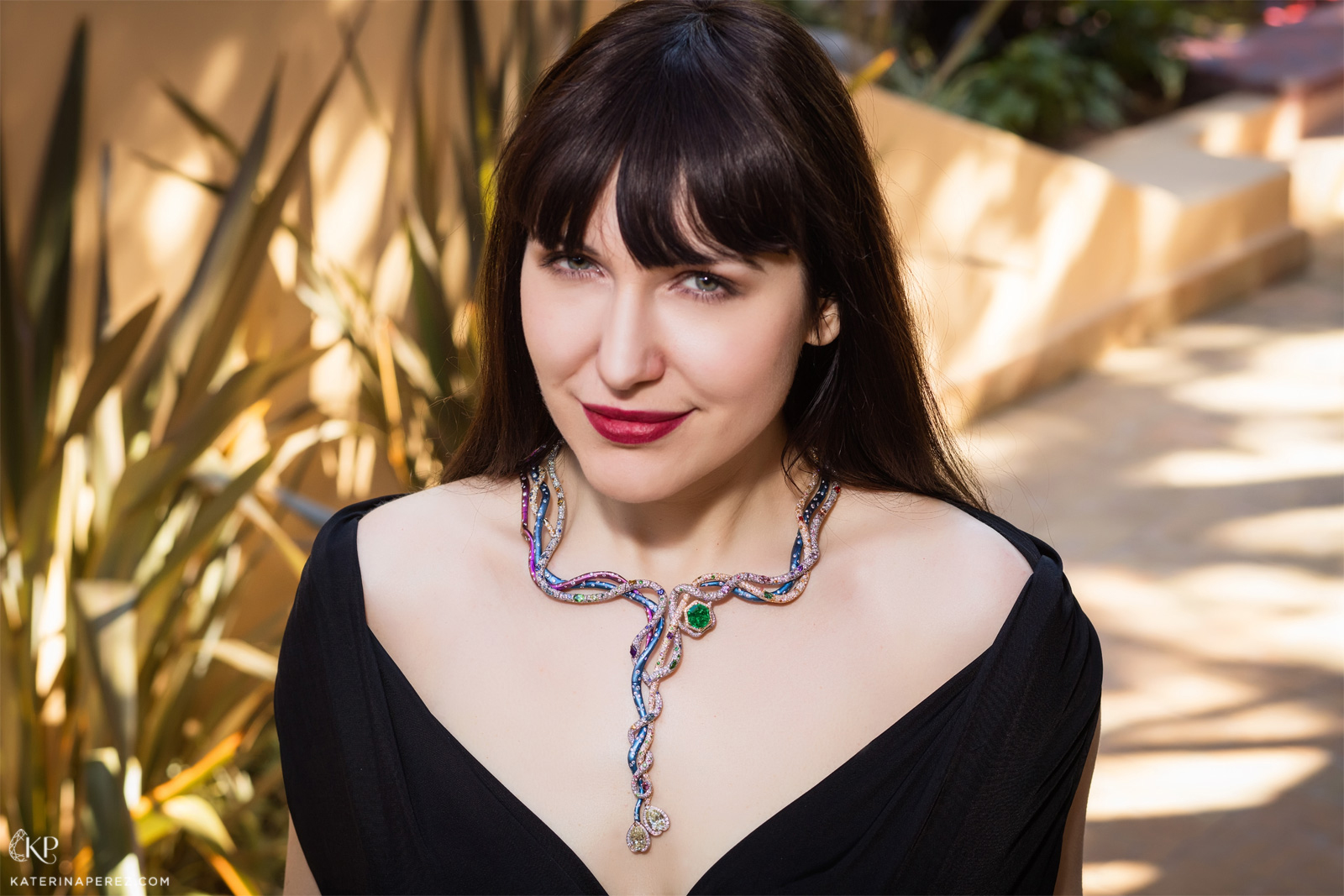 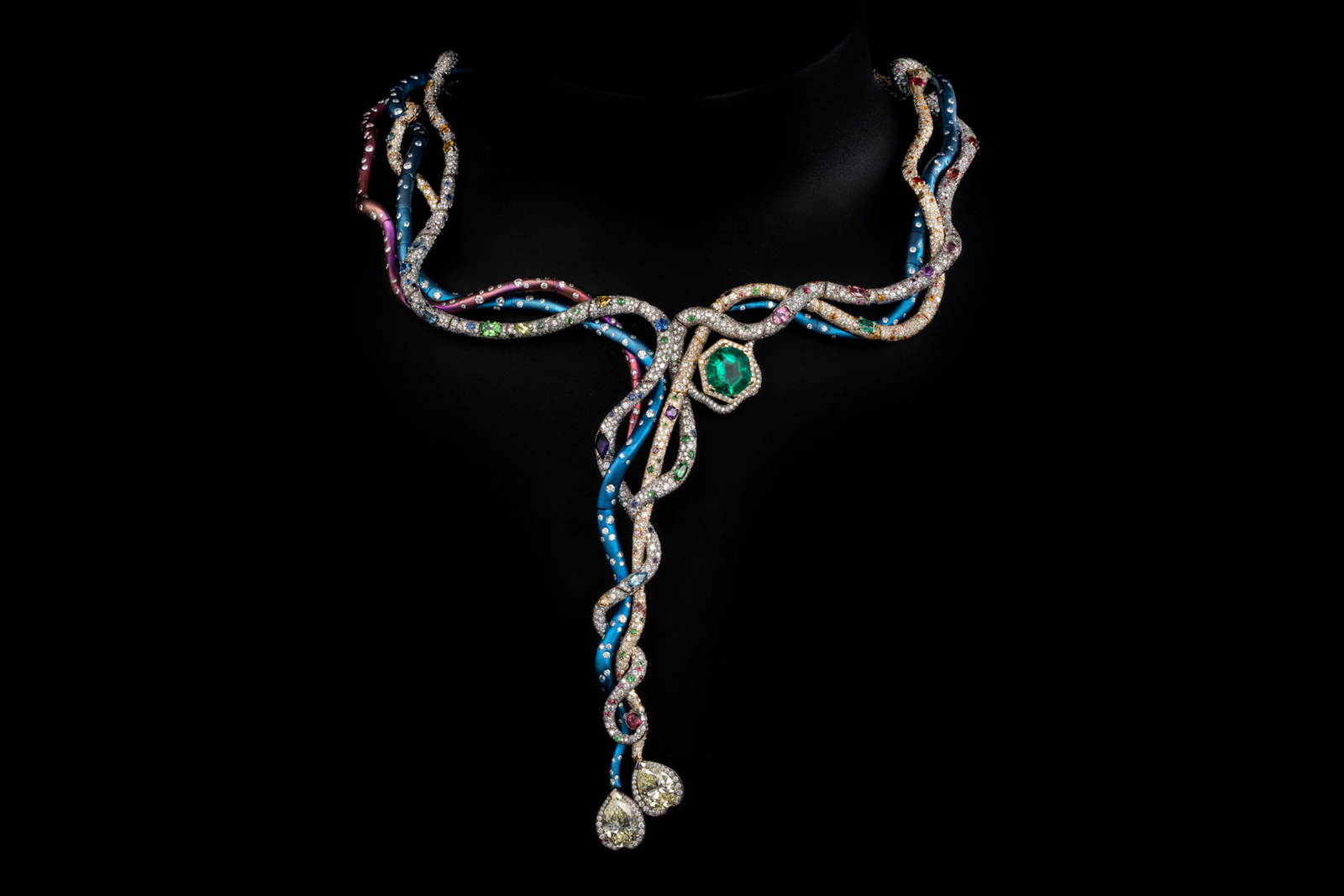 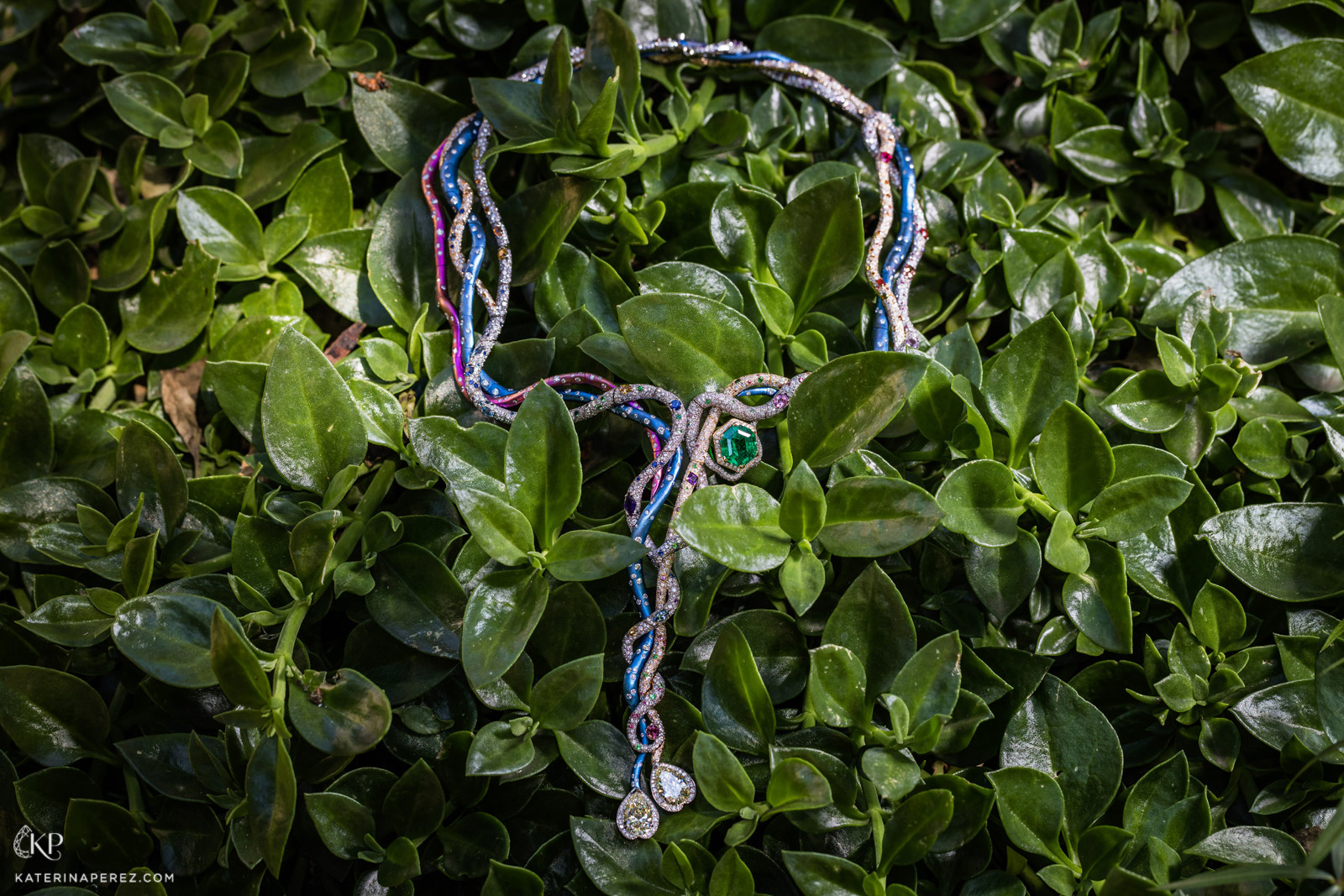 M Haute Joaillerie is always trying to find new cuts, and something out of the ordinary which you don’t see on a daily basis. One of the examples of this is the hexagonal cut Colombian emerald that they used to accentuate the necklace. It later transpired that Her Royal Highness had kept the stone for four years, and when the sketch for this piece emerged it became immediately and abundantly clear: this treasured emerald should sparkle at its centre. 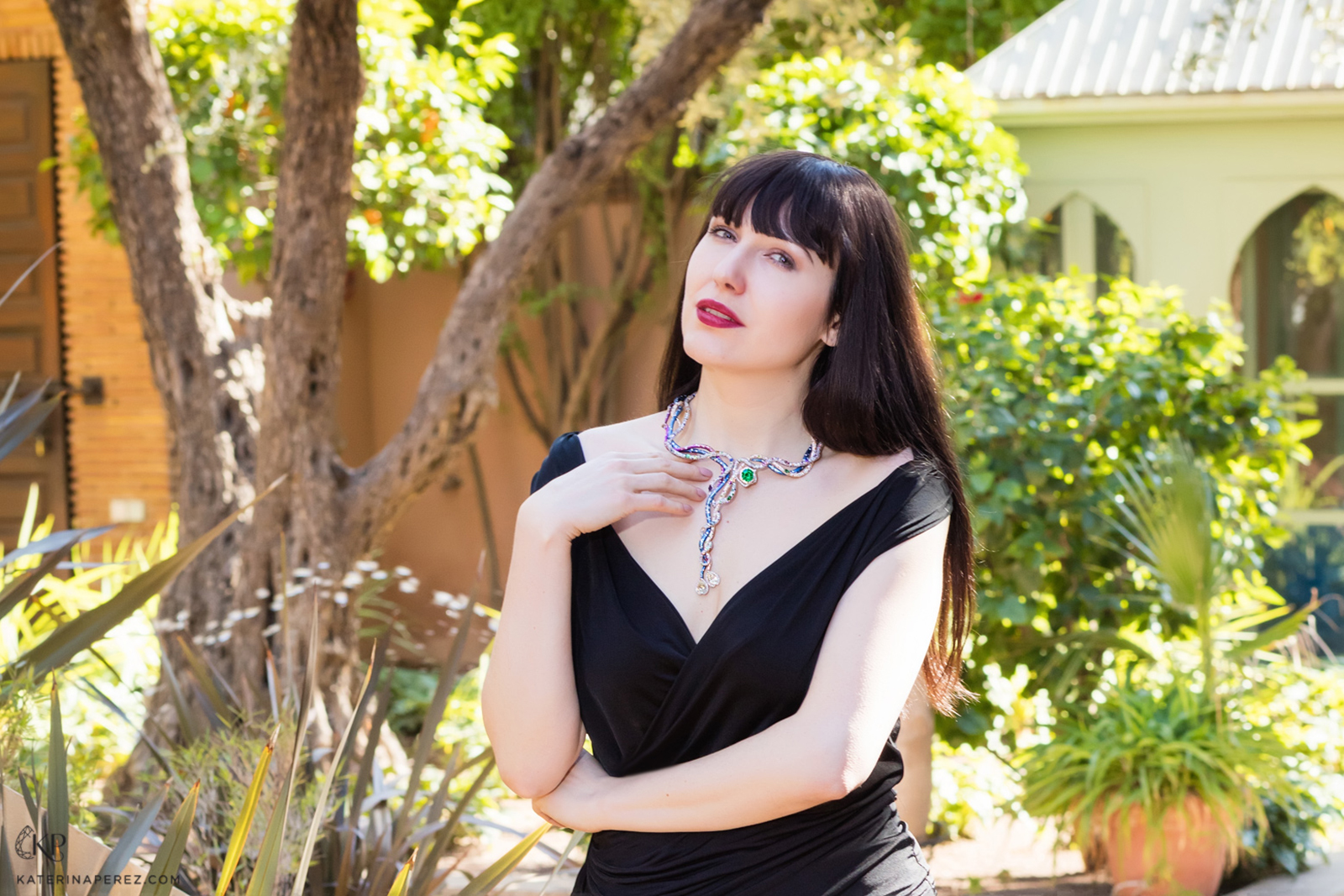 Her Royal Highness told me that work on the necklace dated back to 2016, along with the rest of the pieces from the ‘A Midsummer Night’s Dream’ collection, but to embody her own dreams in jewellery was not as easy the final piece would suggest. They chose to use Titania’s namesake titanium for this necklace, which they feel embodies the characteristic combination of strength and femininity of the Queen of Fairies. Also, titanium is a very difficult metal to work with and tame, due to its complex nature as a material. The articulation of the necklace was very difficult to achieve, as it has four intertwined lines with a very complex mechanism. Her Royal Highness wanted to create something sensual and feminine, and this made the production of the necklace even more complicated. 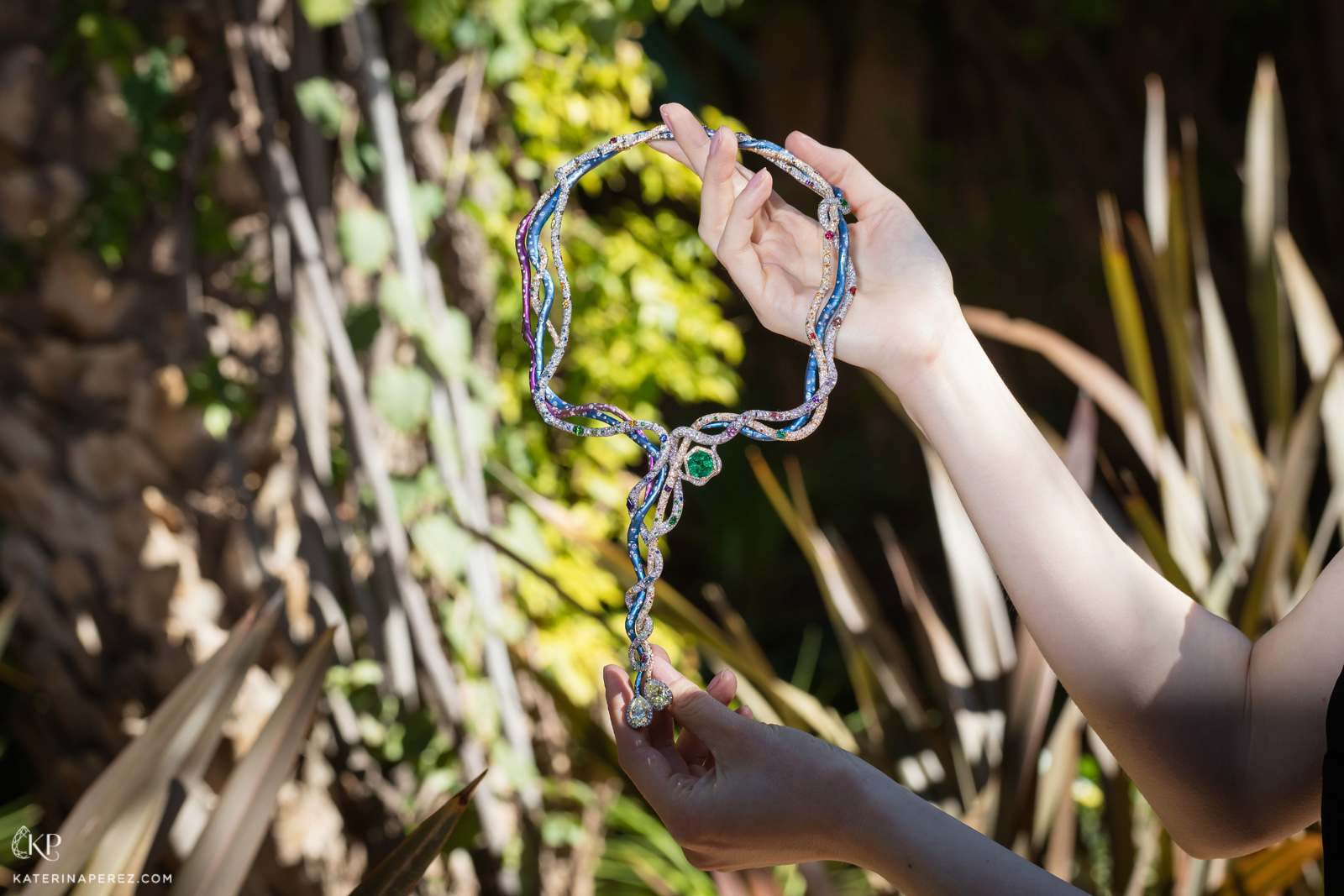 Her Royal Highness’ creative talent, together with the unrivalled craftsmanship of master jewellers in Morocco and France, made it possible to create an original interpretation of one of the most revered works of literature in history – in this collection of jewellery, each item is a work of art.