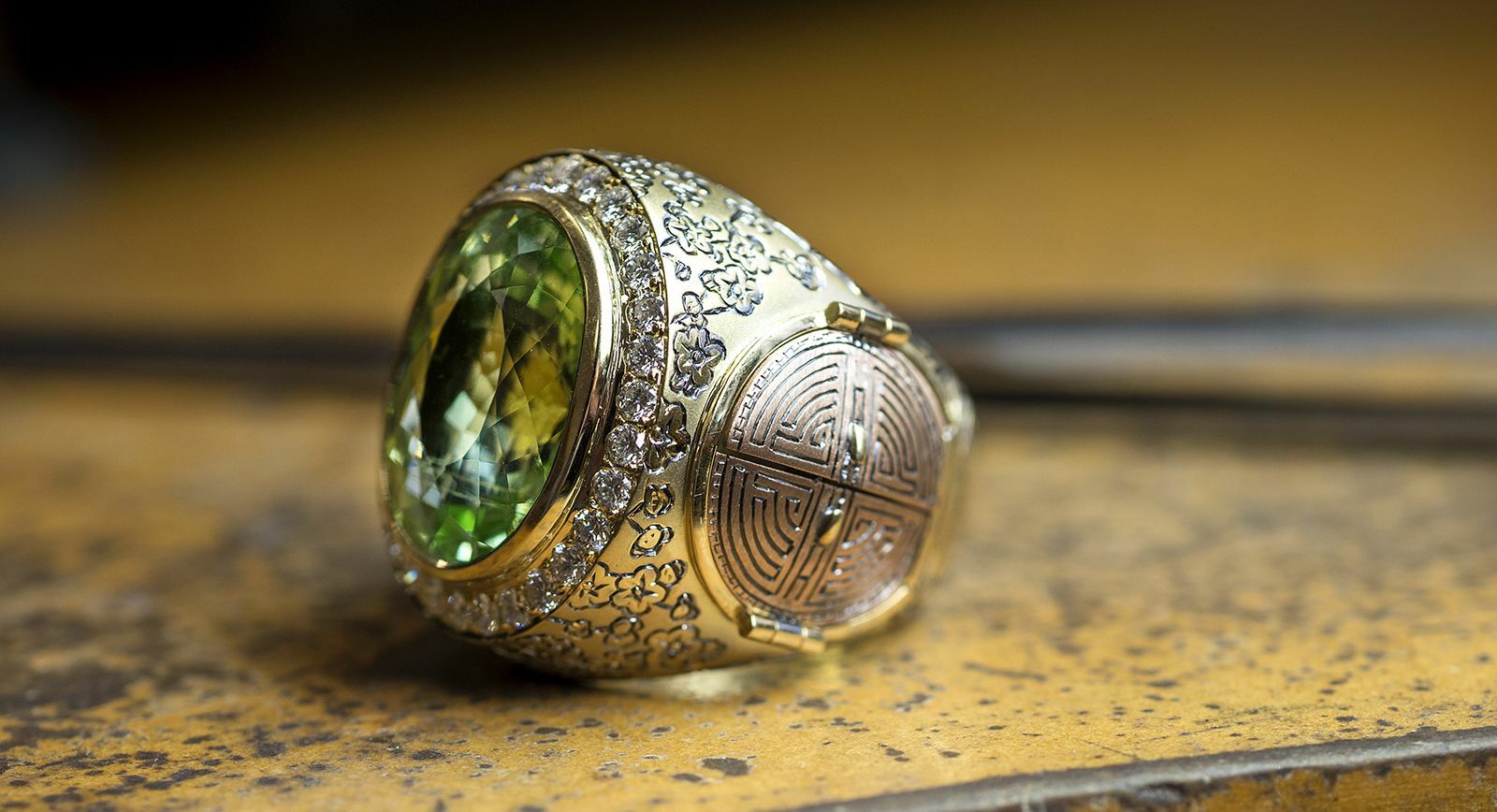 In the first in our series of articles exploring modern jewellery icons, we take a look inside Theo Fennell’s dramatic, domed opening rings, each of which is a masterwork on a miniature scale.

I remember the moment I first encountered a Theo Fennell opening ring at Masterpiece Art Fair in Chelsea, London. In the darkened booth I was handed a magnifying glass, which was absolutely essential for a closer inspection of what lay beneath the transparent rock crystal dome on Fennell’s Empty Quarter ring. With the dome prised open, a miniature scene was revealed: that of three camels, walking across an undulating, textured-gold desert, the so-called “Empty Quarter”. Little larger than a pinhead, these humped creatures were barely discernible with the naked eye. Beneath the magnifying glass, however, the shimmering sand dunes came alive, and each camel came sharply into focus, created with extraordinary attention to detail by the famous English micro-sculptor Willard Wigan MBE. 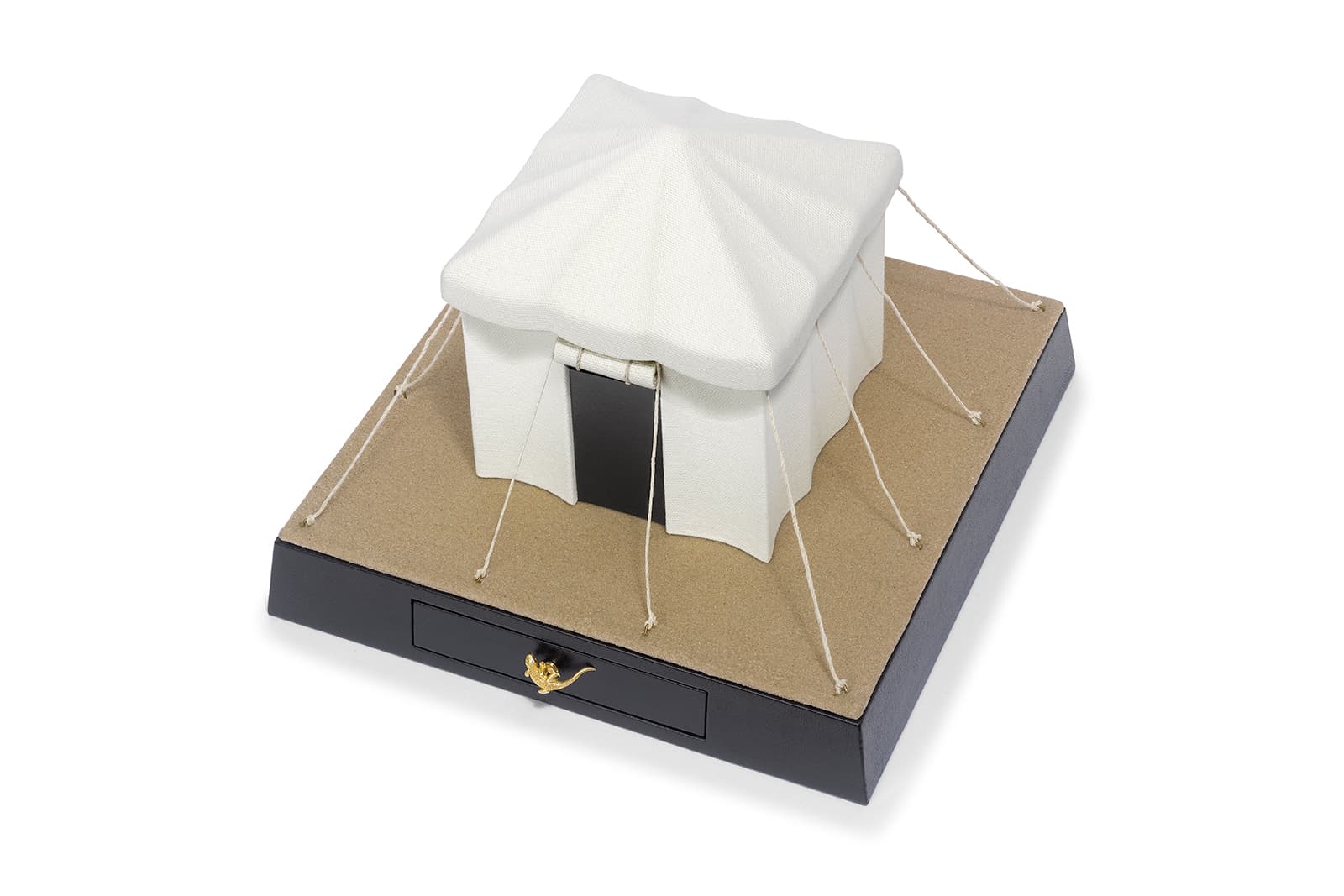 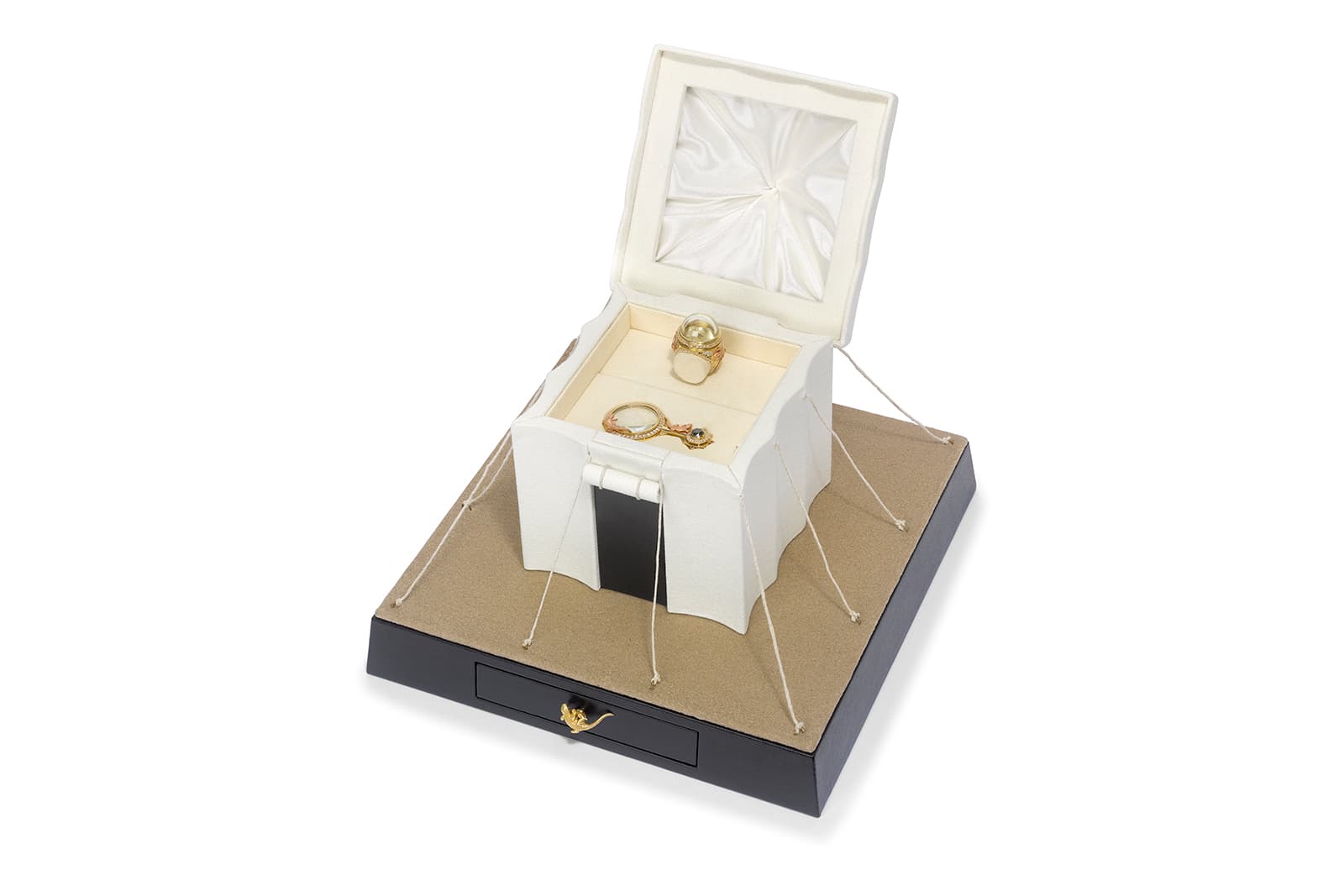 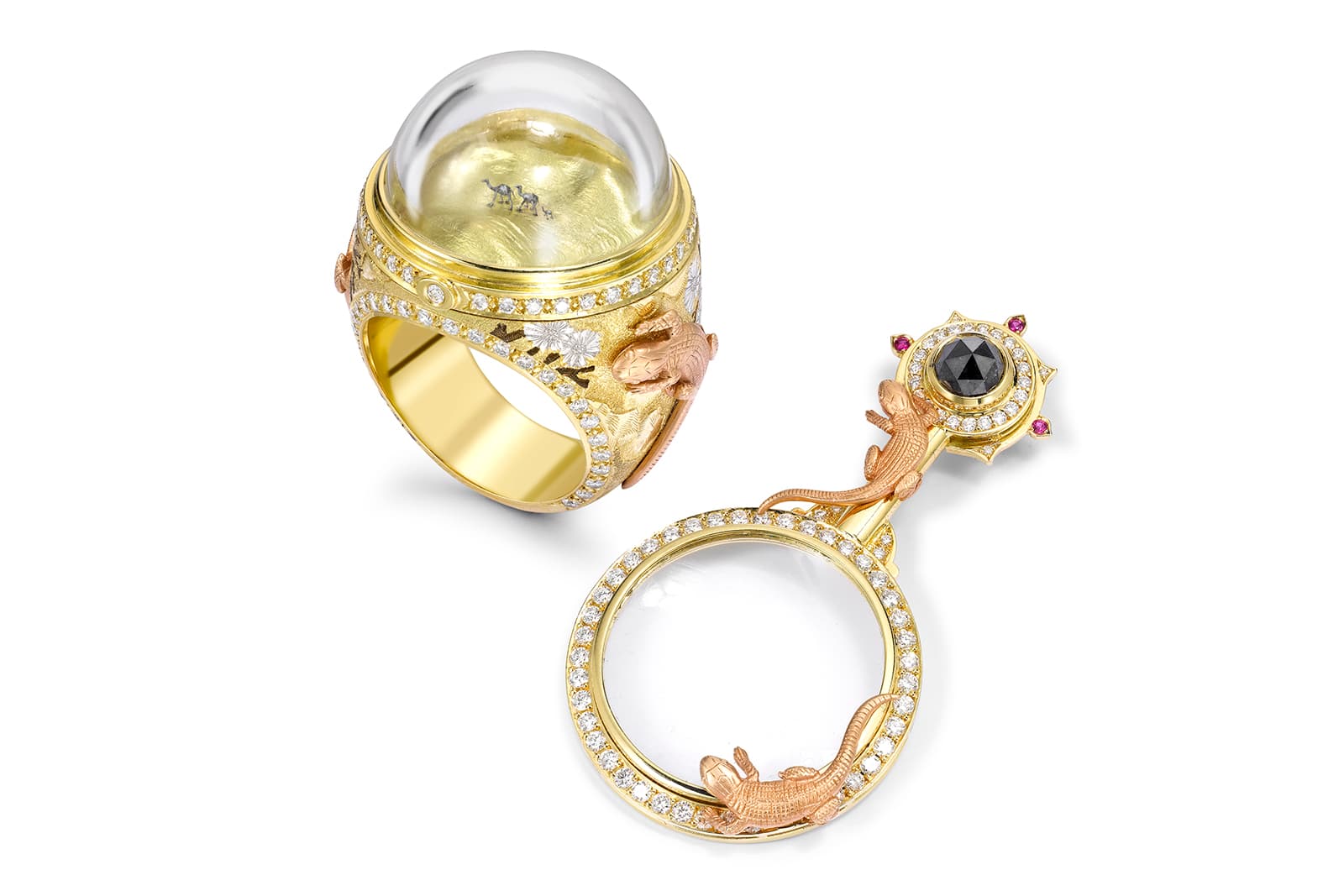 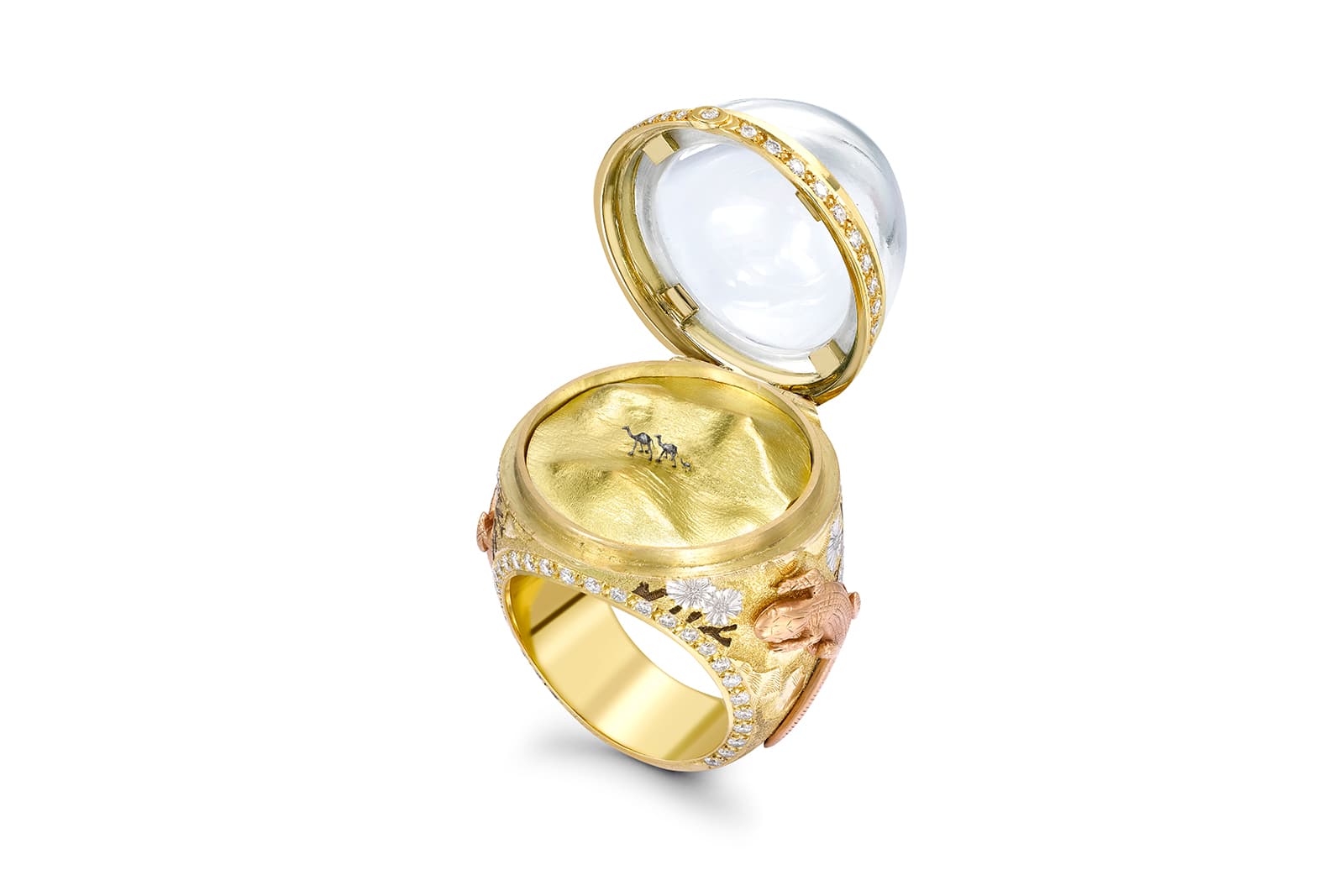 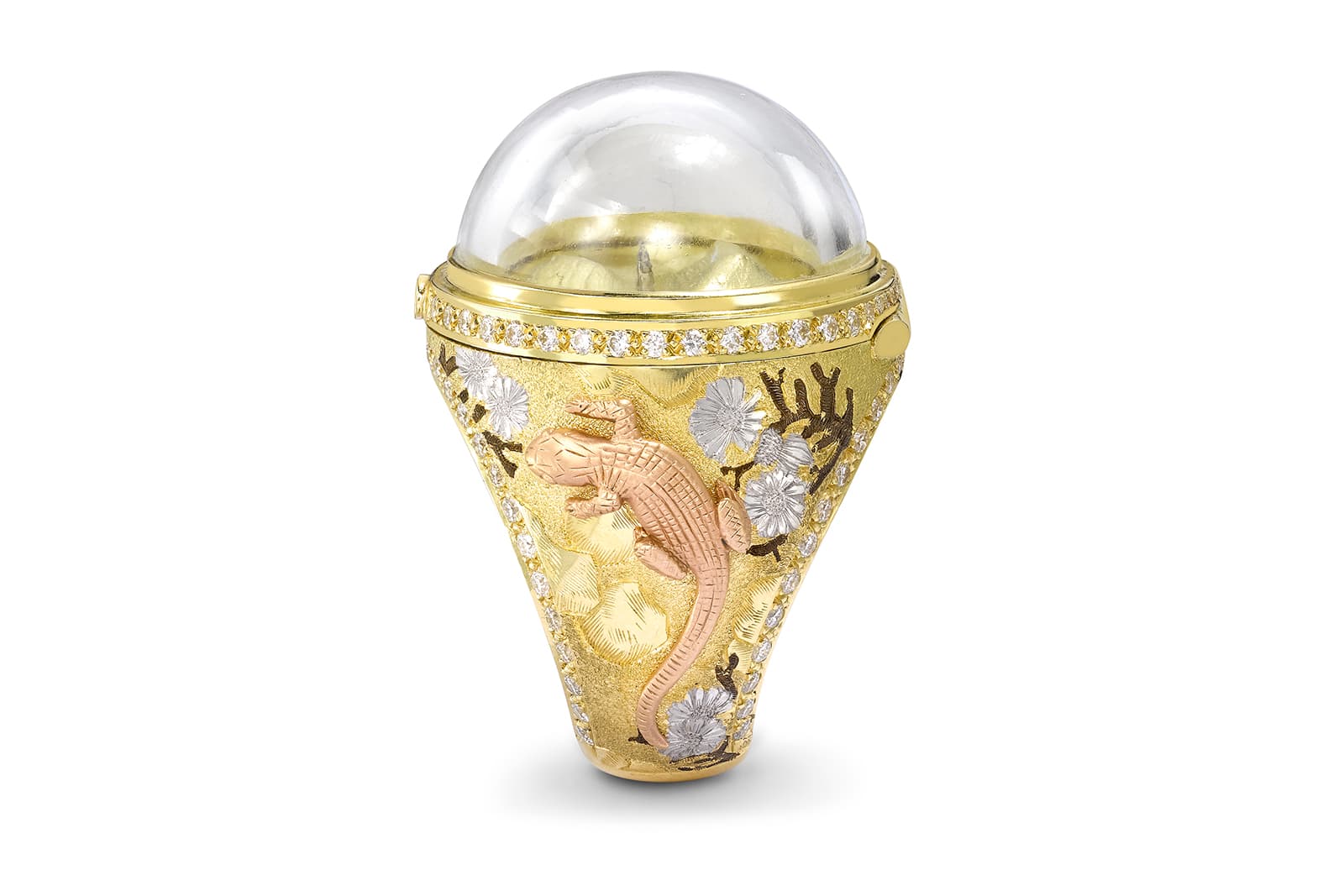 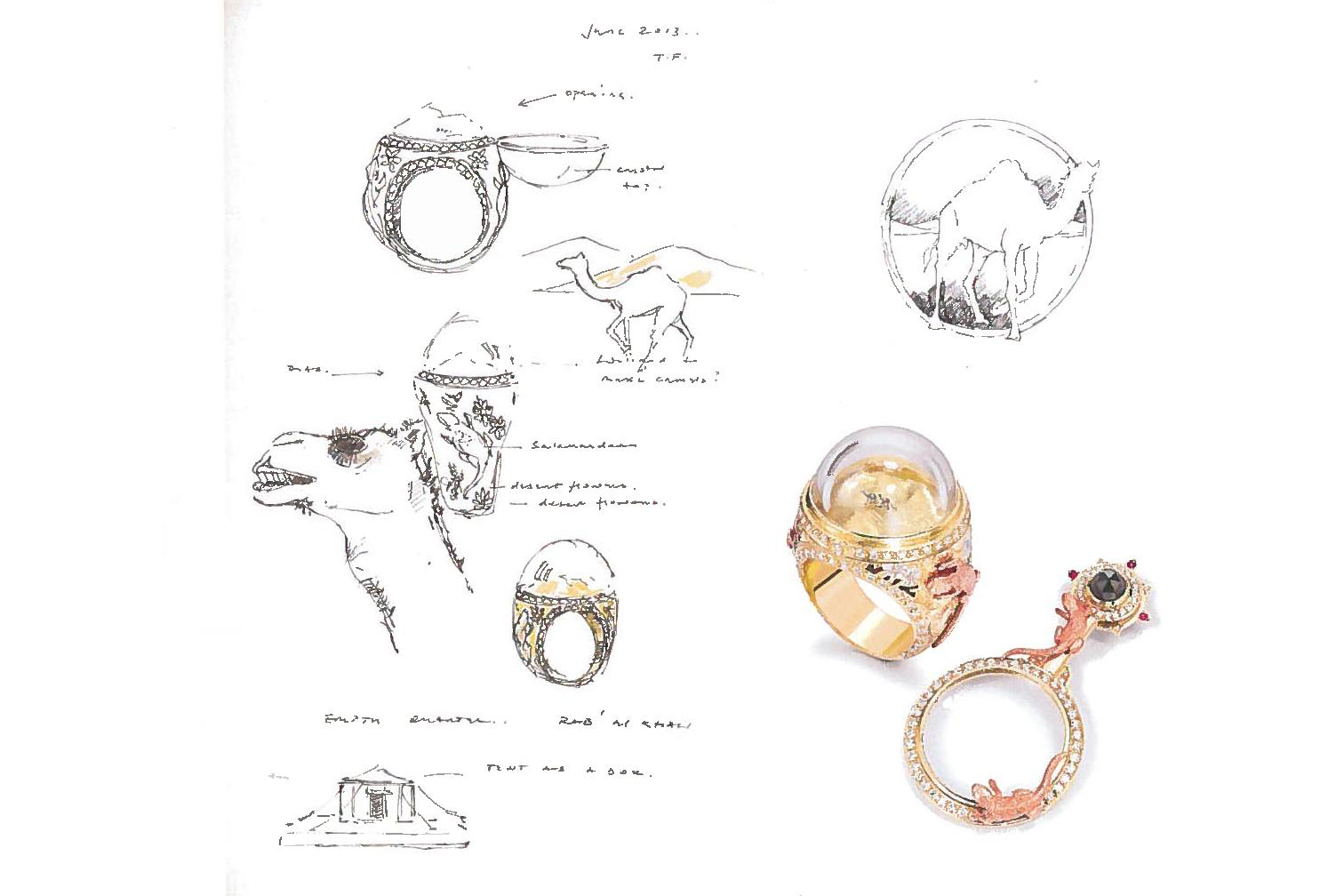 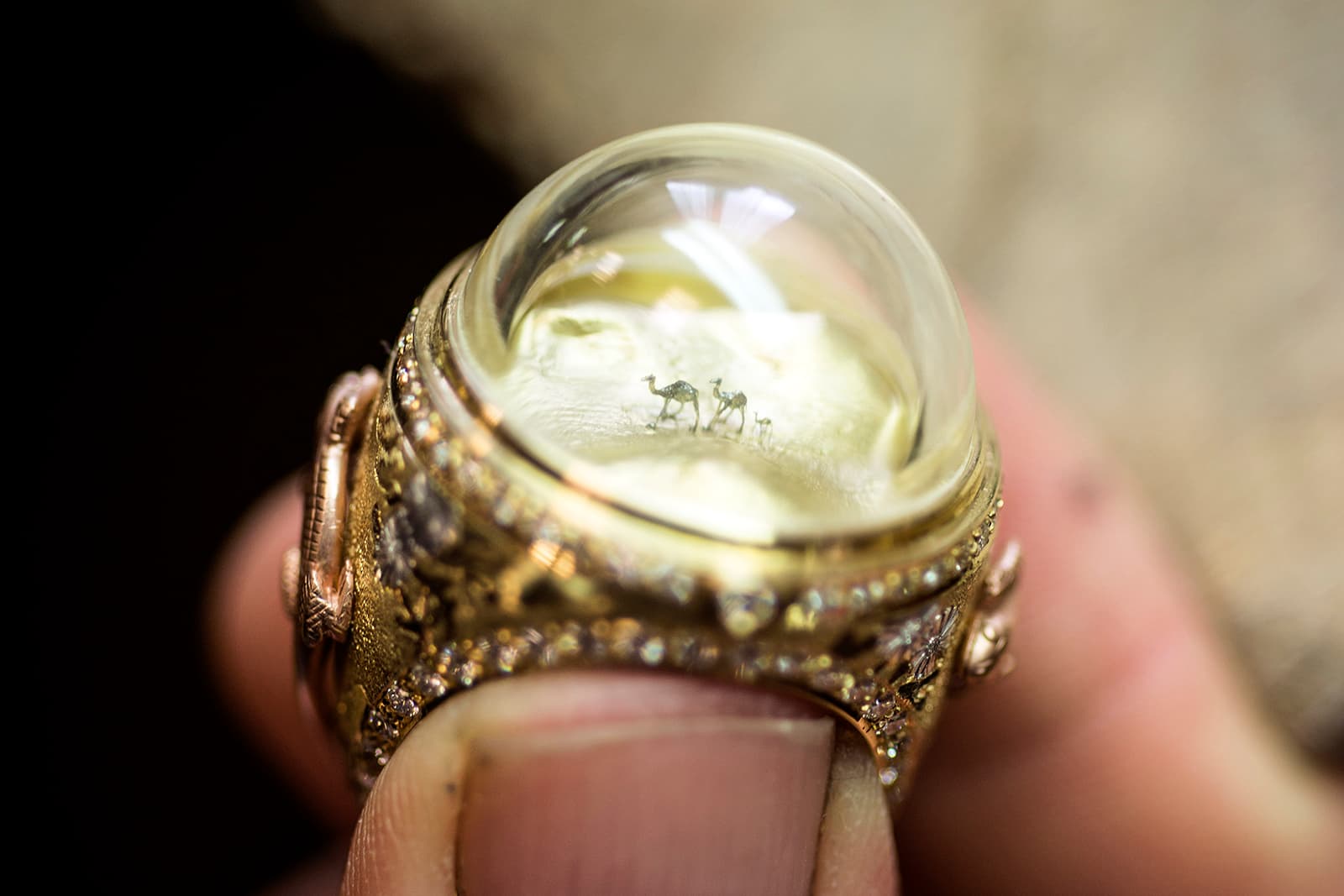 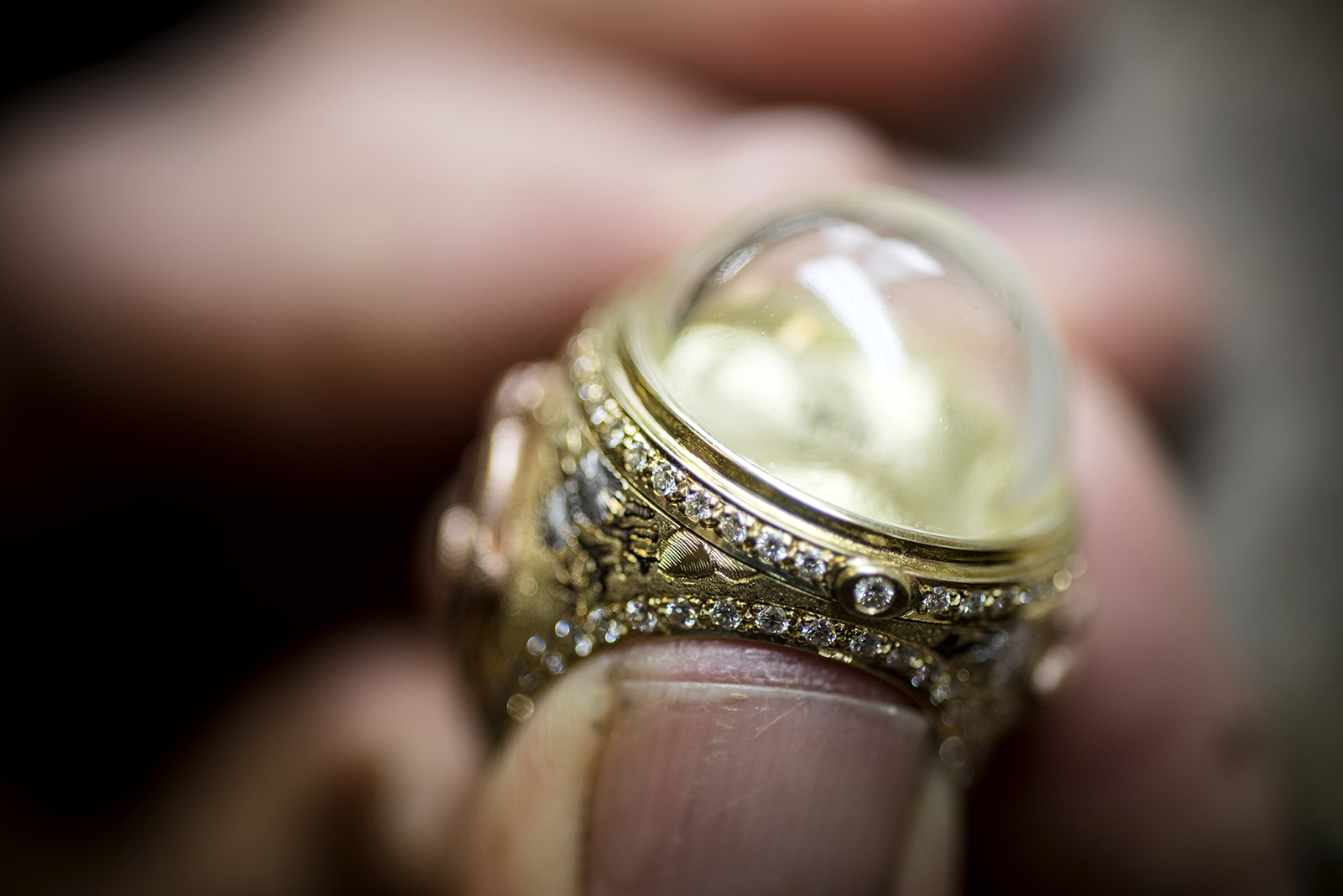 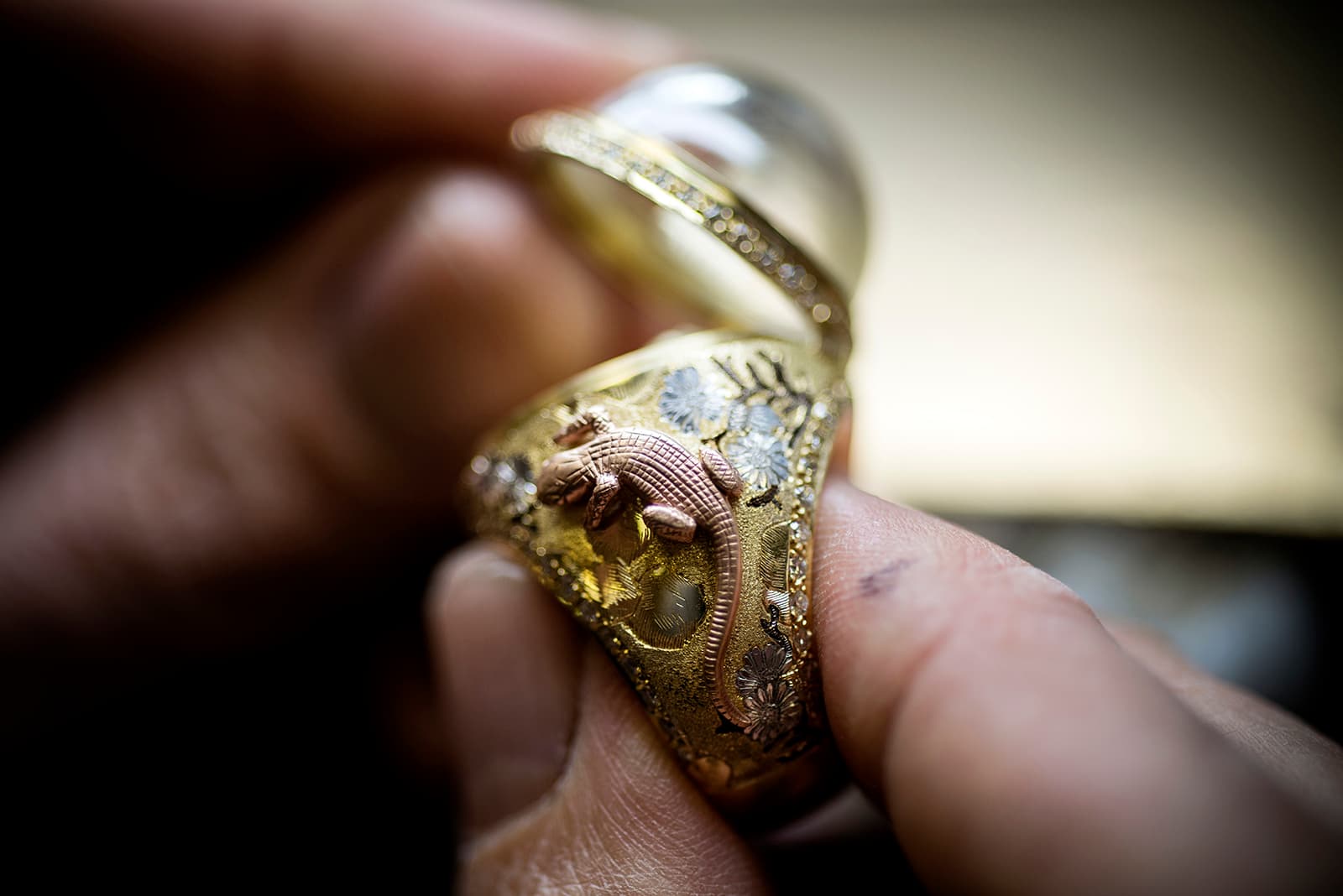 Theo Fennell launched his Secret Garden ring in 2011 – the first in a very limited series of opening rings featuring moving parts. He was inspired to create the design while staying in France with friends. “The ivy on a wall in their garden was just the colour of a stone I had just bought,” he explains. “In the middle of the wall was a door which led to a garden. The idea came to me to make opening doors in the side of the ring with an enamelled garden scene behind them and the lush, green stone on top.” The design quickly became one of his creative hallmarks, evolving into ever-more theatrical designs featuring intricately realised scenes, with the myriad details designed to be revealed and appreciated slowly, layer by layer. 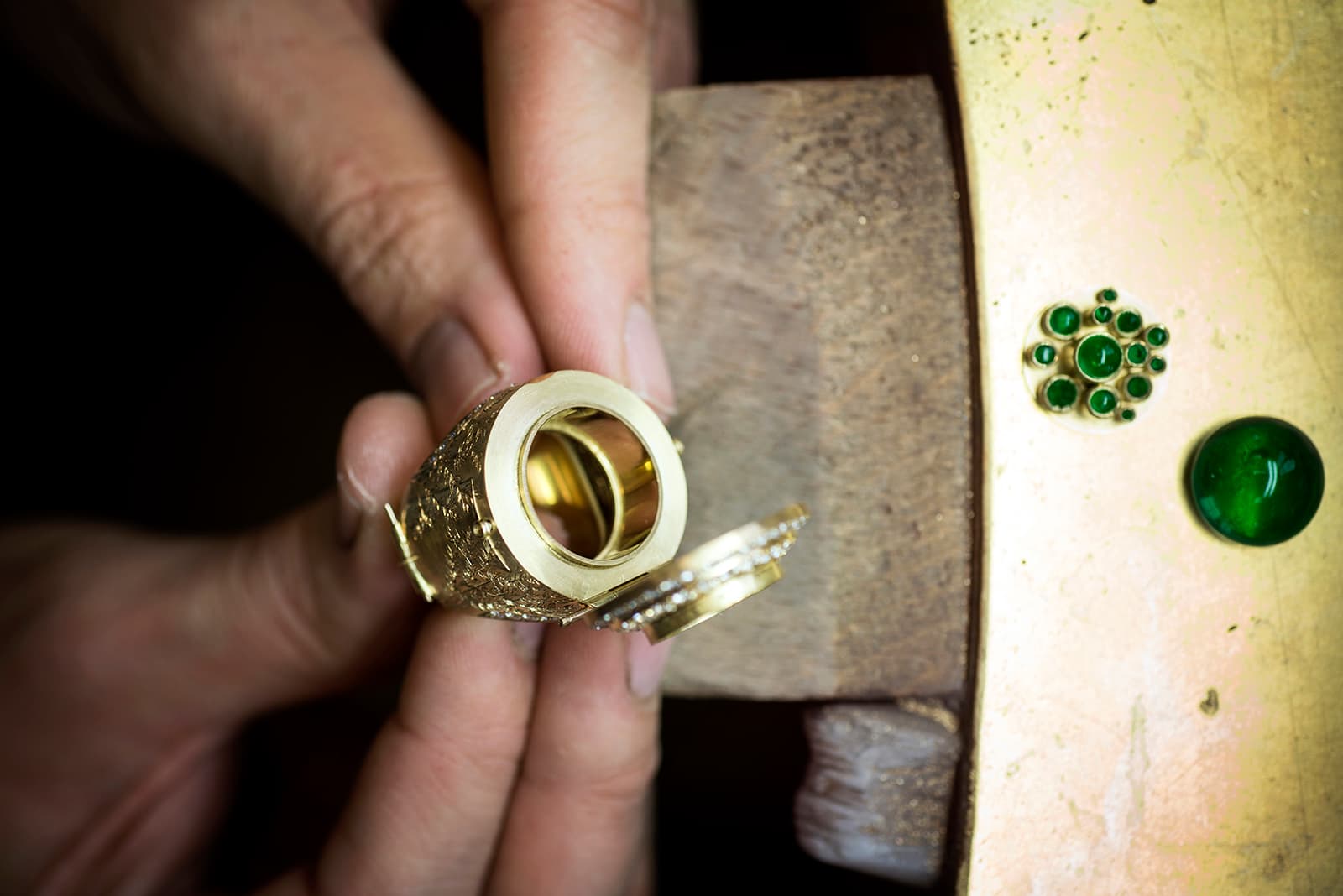 Imaginative, innovative and whimsical, Fennell’s opening rings are also incredibly complex creations. Among the most challenging to create was the Emerald City ring. Inspired by the Wizard of Oz, it features numerous decorative elements, including a beautiful 13.14 carat Zambian cabochon emerald, elaborate engraving and enamel paintings hidden behind the opening doors depicting Dorothy, Toto and the Yellow Brick Road. “I have always been drawn to Renaissance and Elizabethan jewellery, and objects that require incredible skill to make,” explains the London-based designer. “I am lucky that I have a workshop with those skills to make these sorts of pieces.” Often taking months to make, these sculptural, three-dimensional creations are as much works of art as wearable jewels. Fennell agrees: “I think there is a distinction between ‘jewellery’, which is only for decoration, and ‘a jewel’ which is both to wear and to be looked at in great detail.” 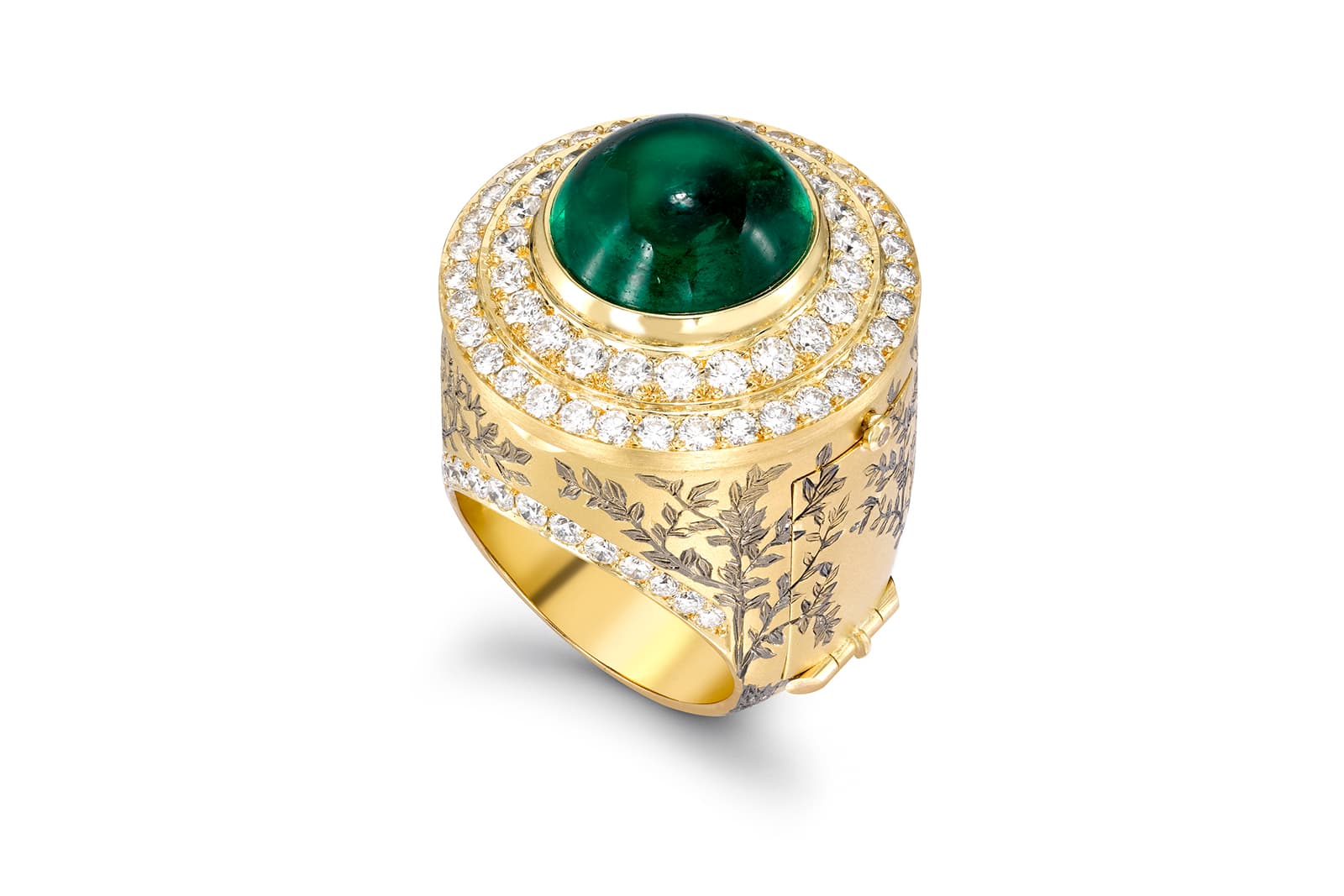 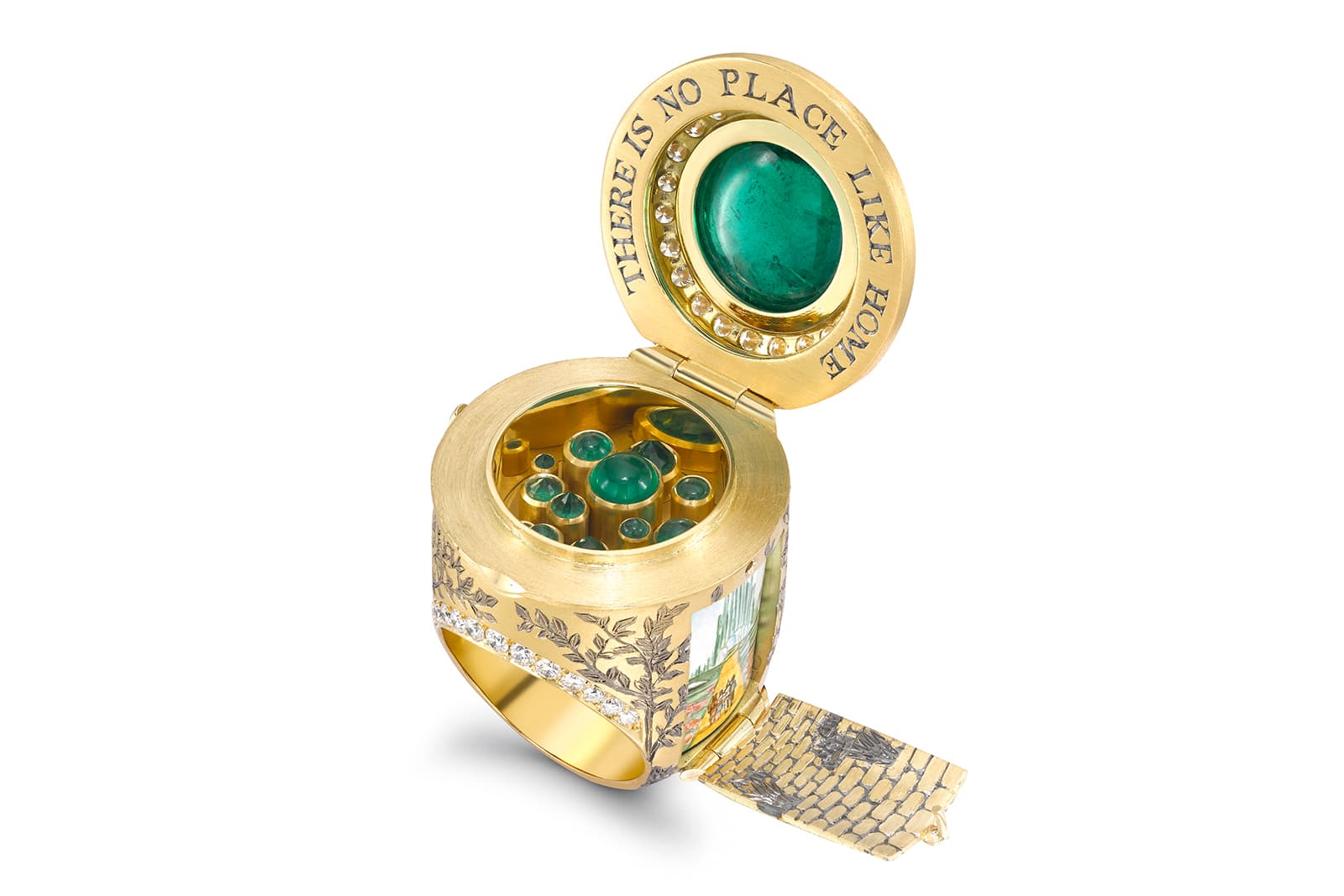 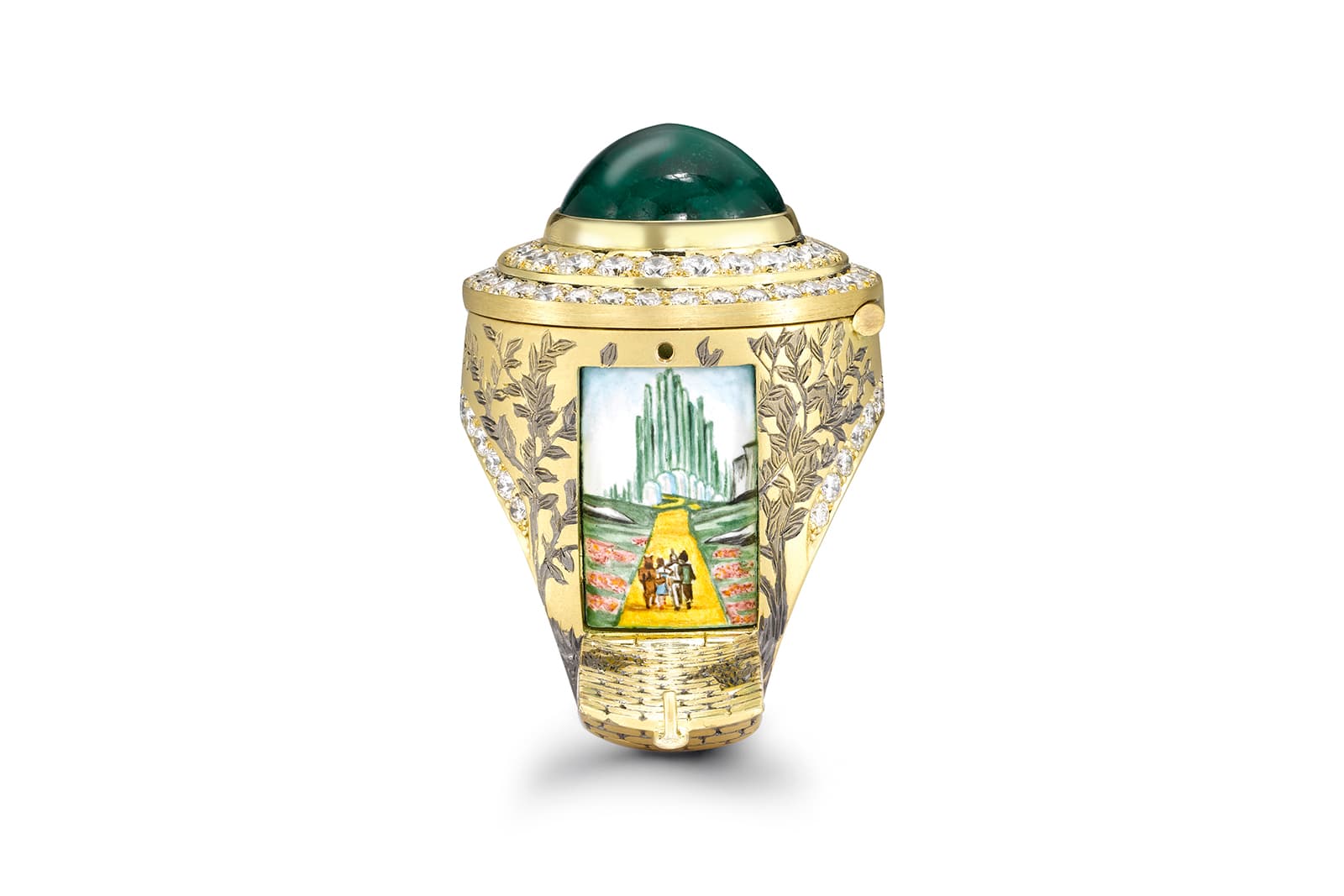 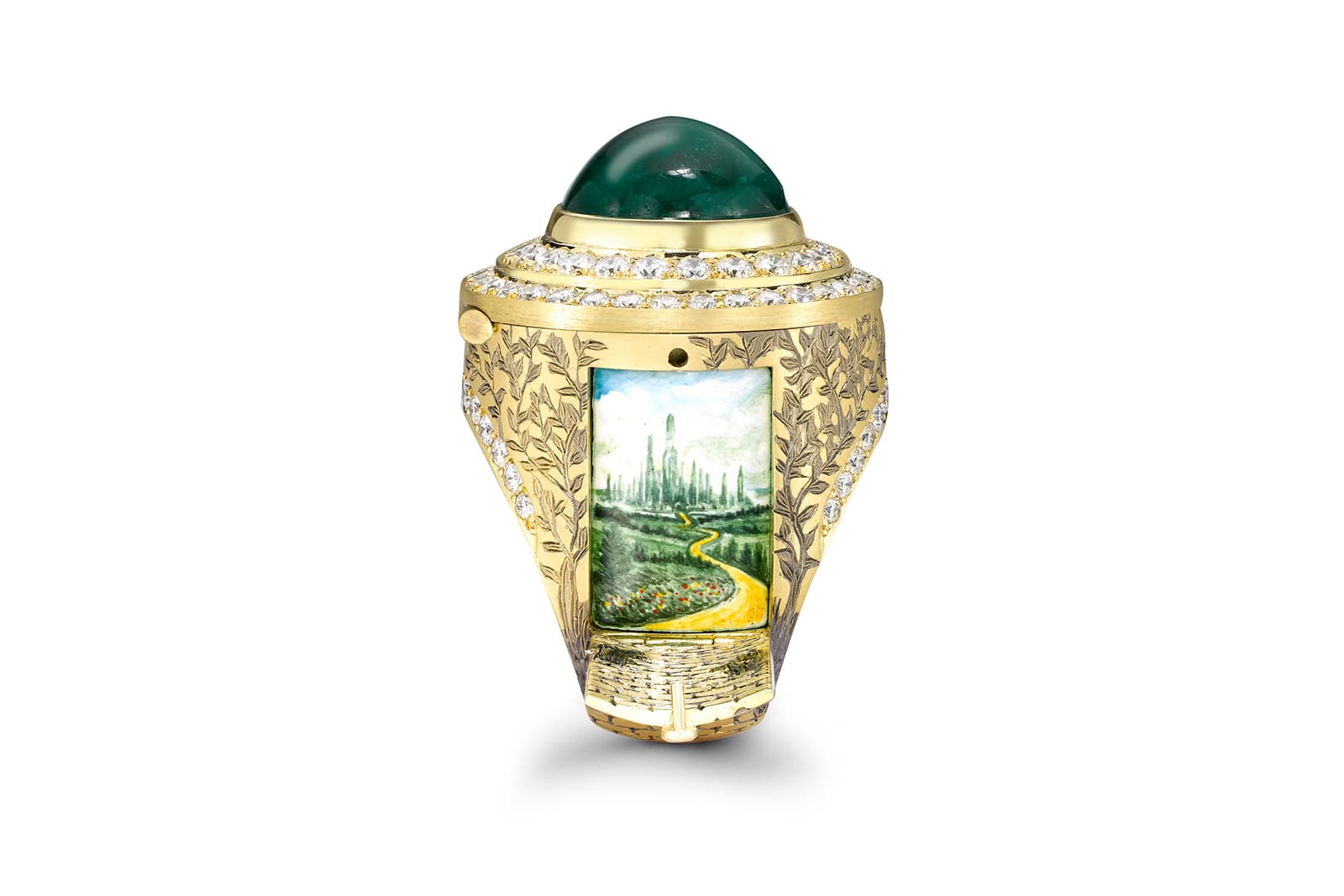 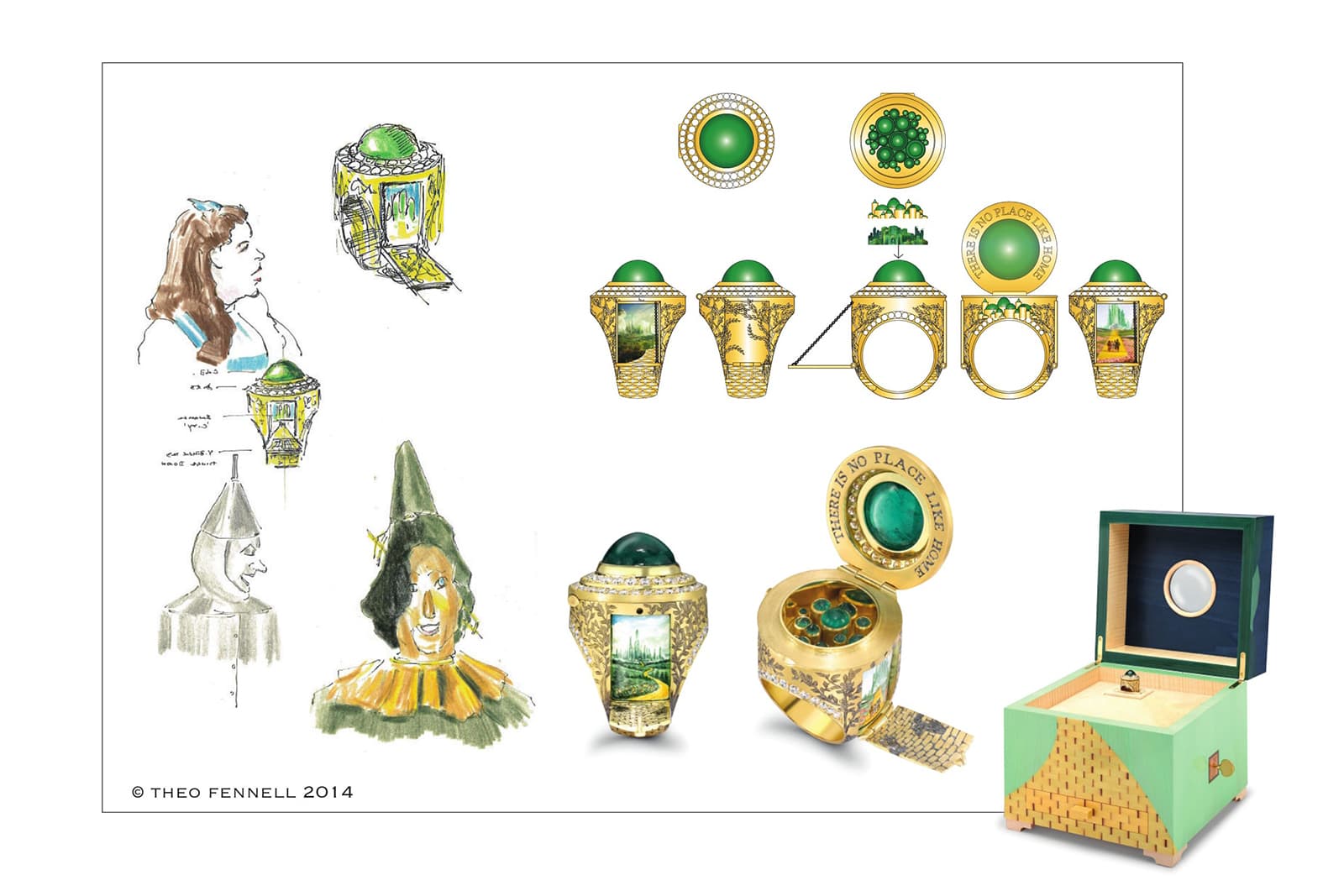 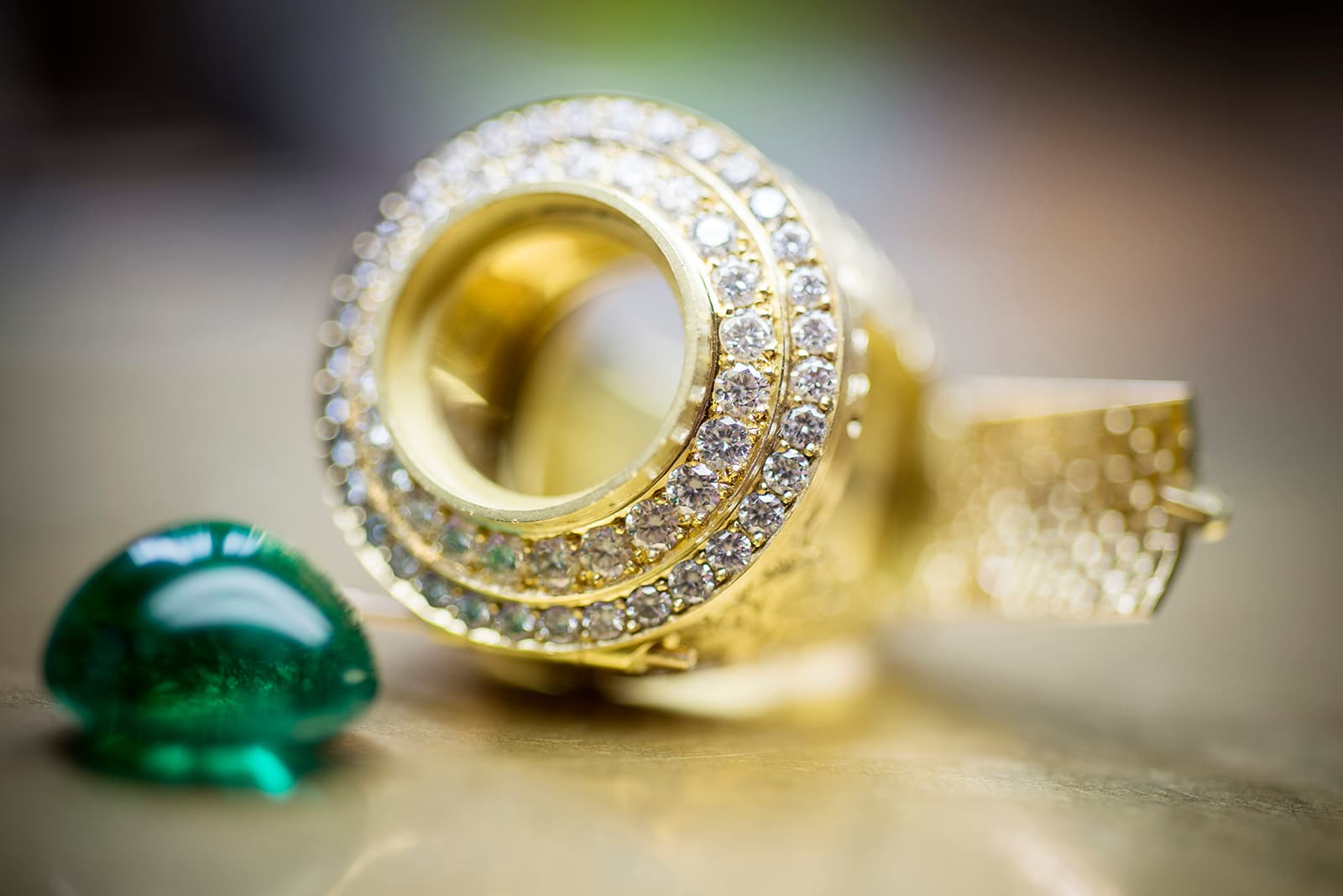 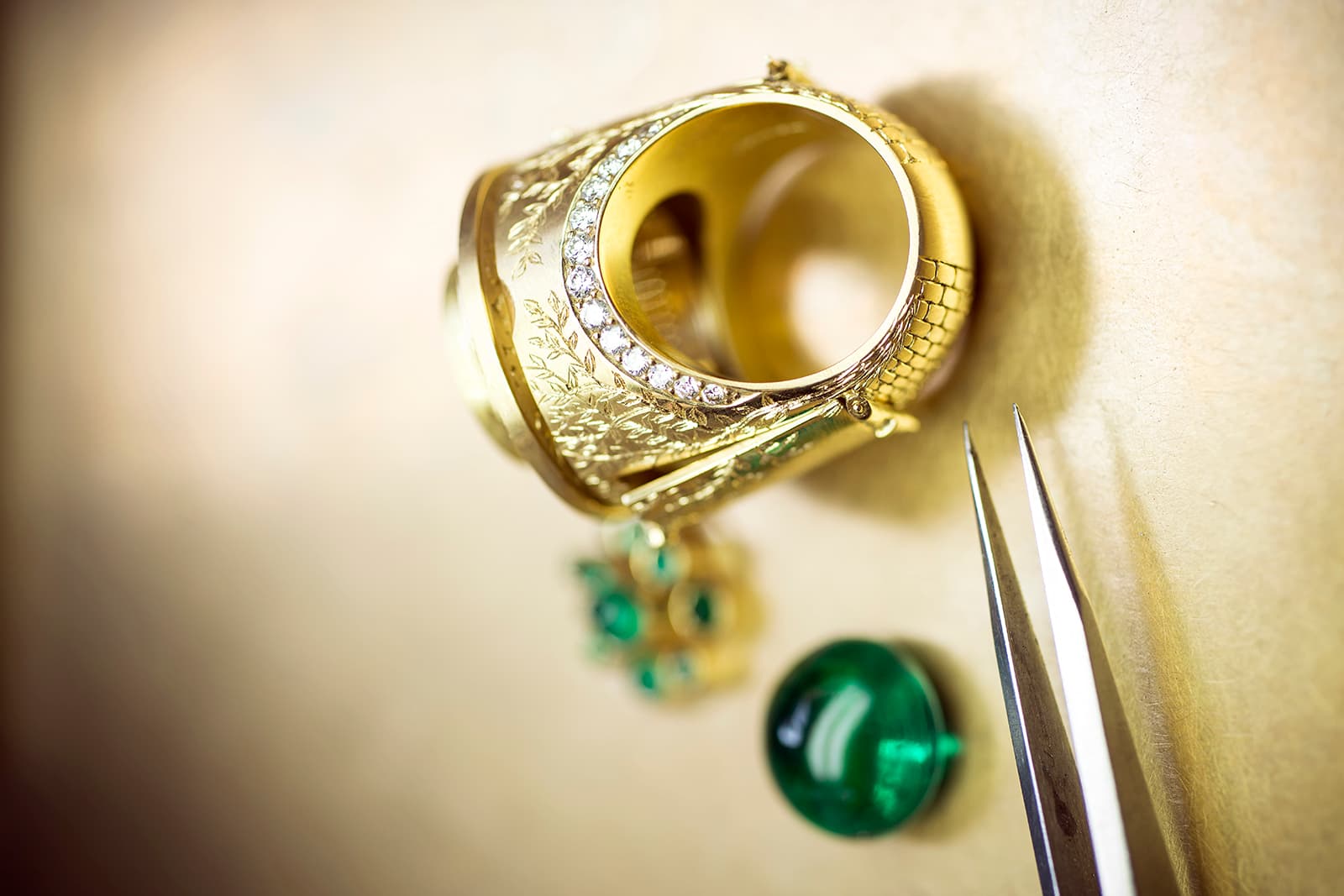 The Over the Rainbow open ring is a personal favourite. A beautiful distillation of one of the most magical stories told to children – that there is a pot of gold at the end of the rainbow – fluffy clouds, carved into the rock crystal dome, set the scene, with the vivid colours of the rainbow peeking through. On either side of the ring are a pair of miniature doors, behind which are hidden two enamel paintings – tiny glimpses into this mythical world. Hidden inside is the legendary treasure: a gleaming pot filled with tiny gold coins.

From fairy tales to epic monuments, Fennell is undaunted by the technical skill required to tackle grand subjects on such a small scale. His Slain Gladiator ring is an homage to the Colosseum, the iconic Roman landmark in which gladiators fought for their lives in front of huge crowds. Inside, a slain warrior lies with his sword by his side, Fennell’s second collaboration with the micro-sculptor Willard Wigan. The details are exquisite, from his knee-high sandals to his gladiator helmet. Similarly, the prehistoric monument of Stonehenge is captured with uncanny accuracy beneath a sky formed of London blue topaz, dotted with diamonds for stars. 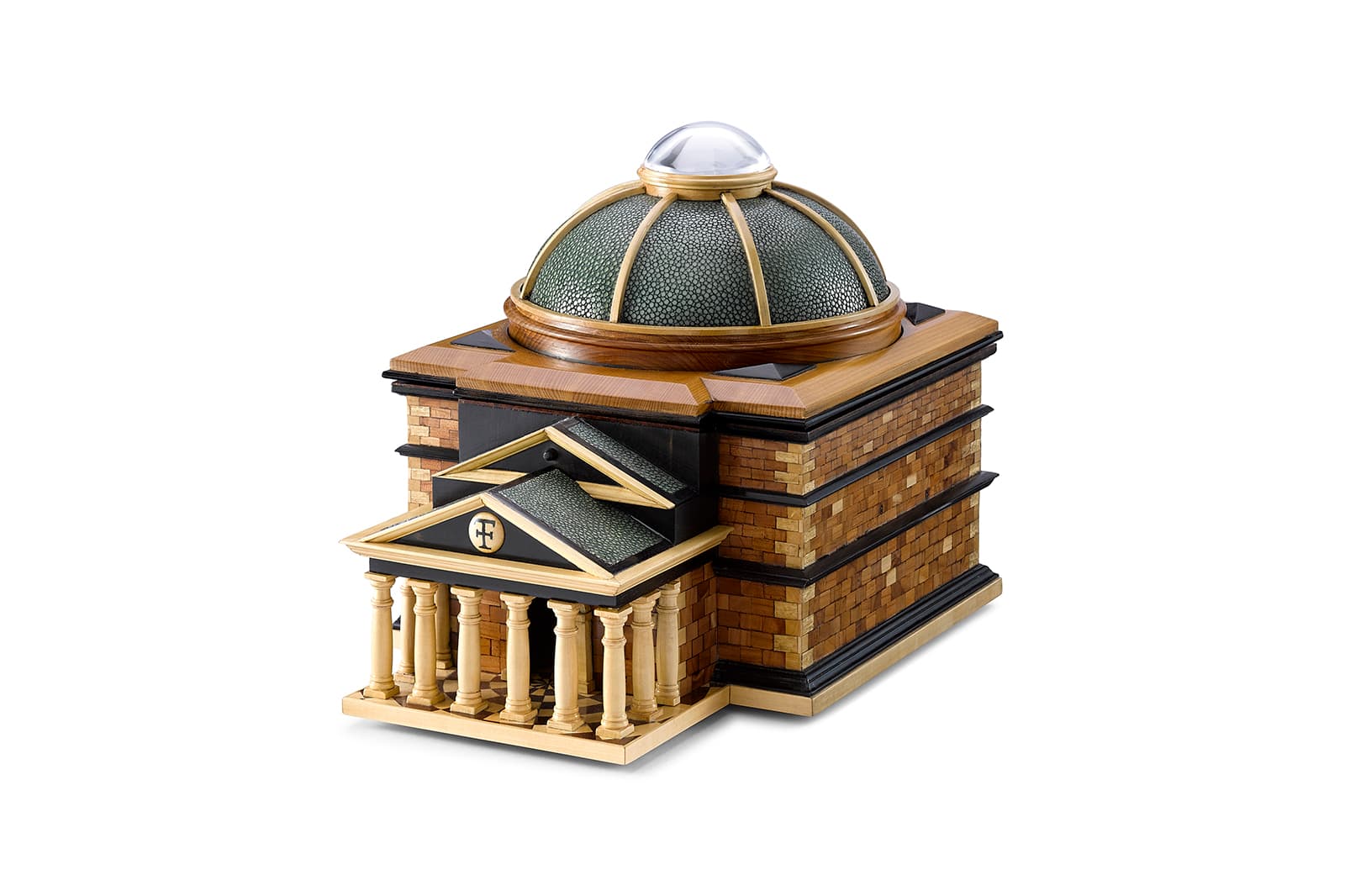 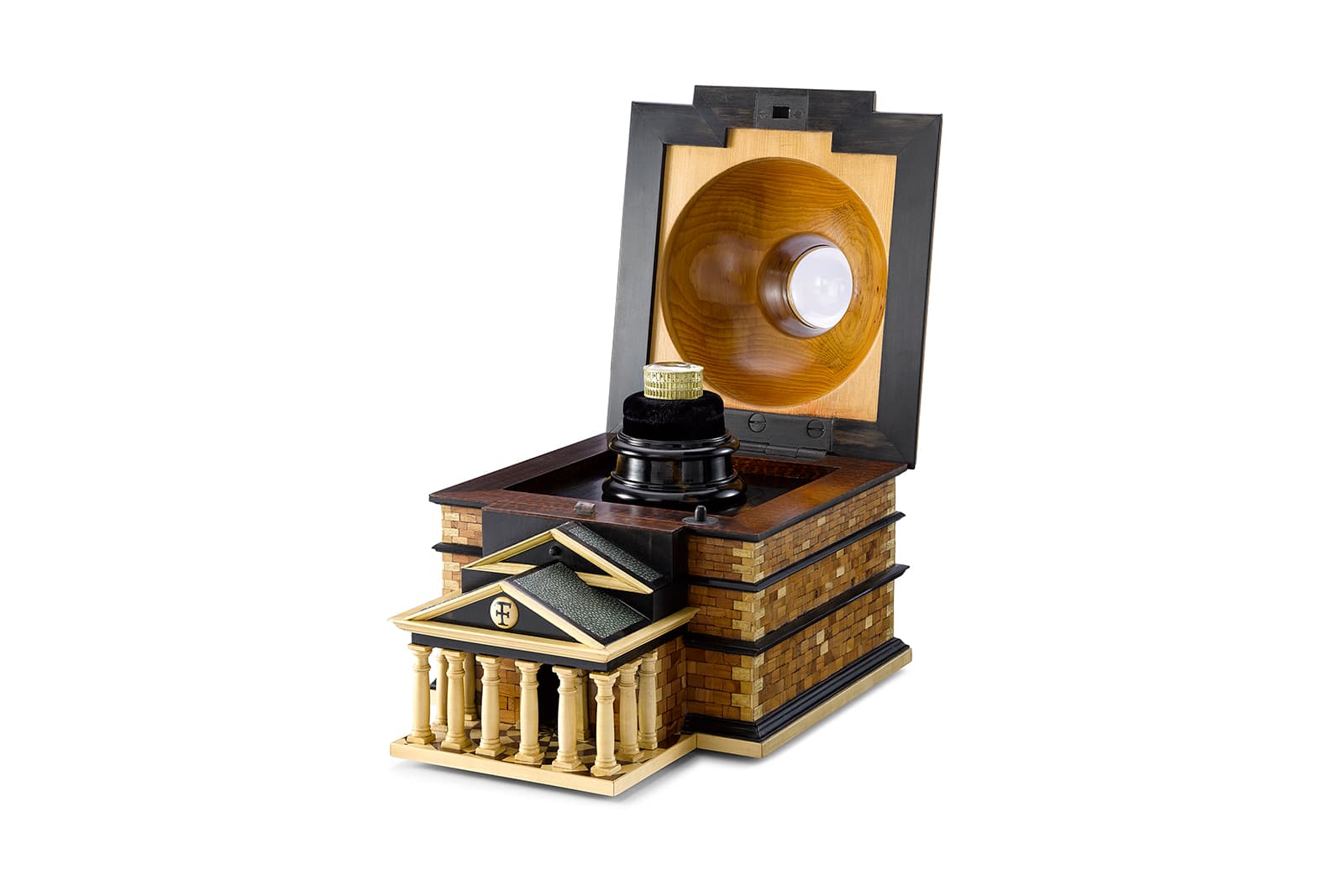 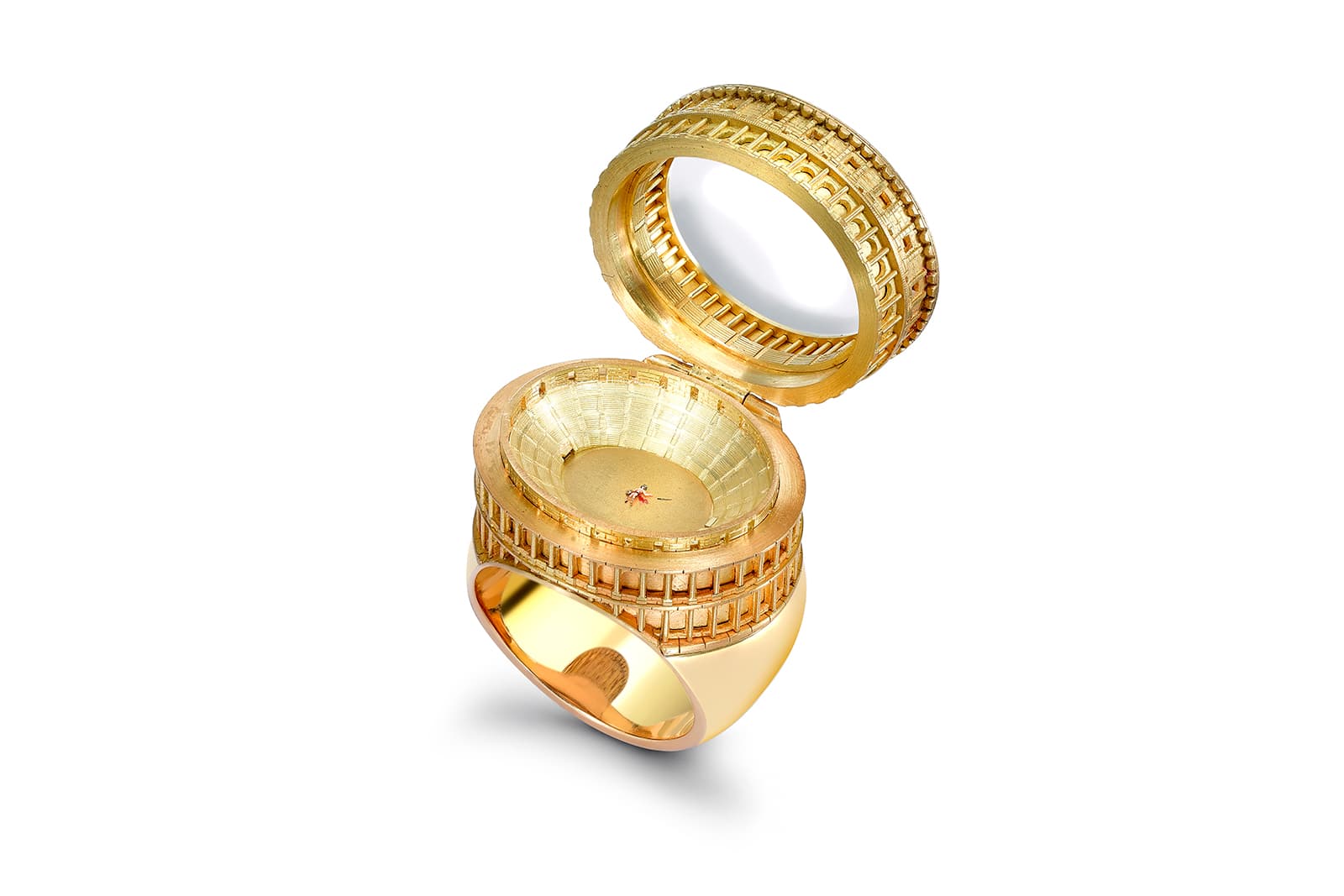 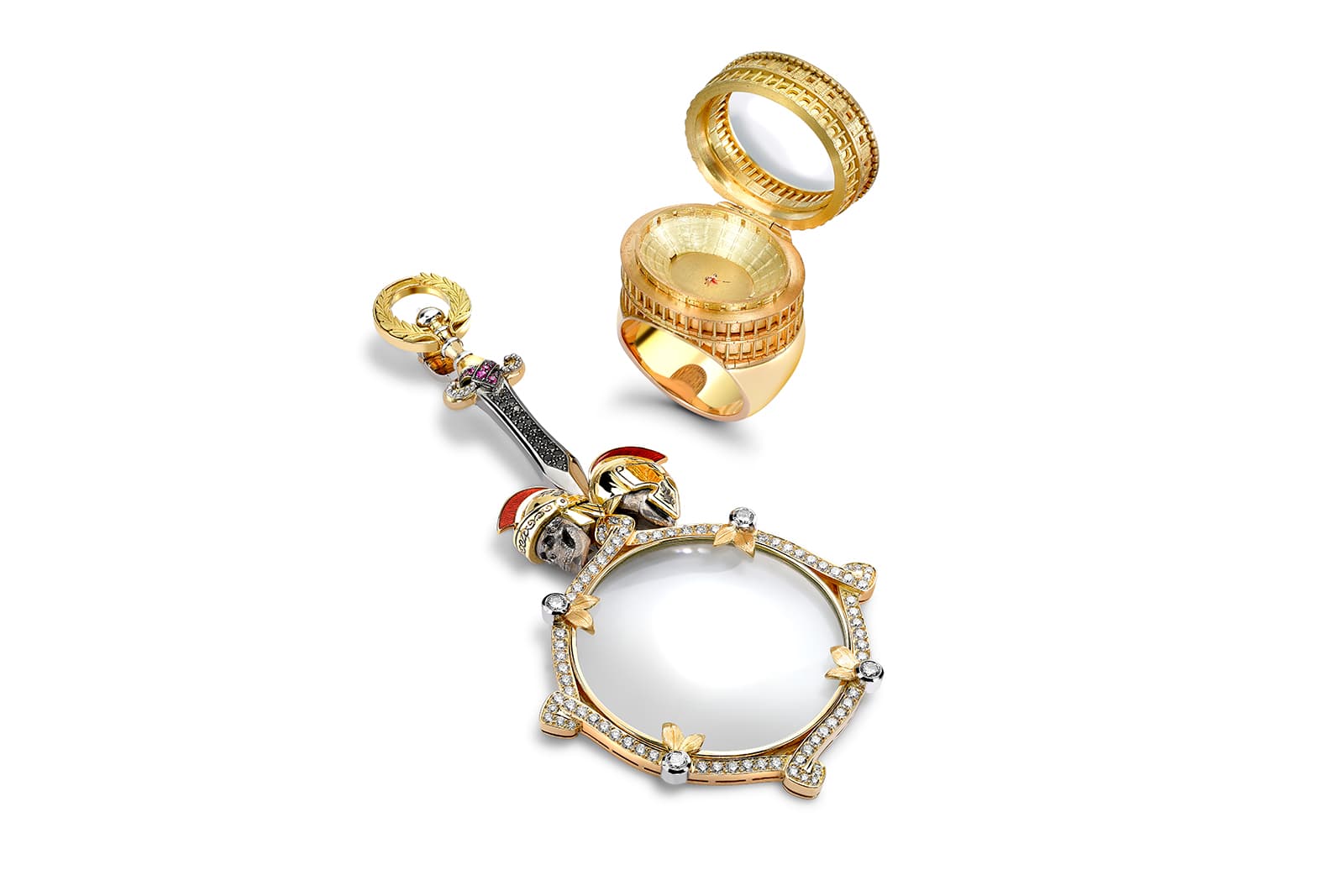 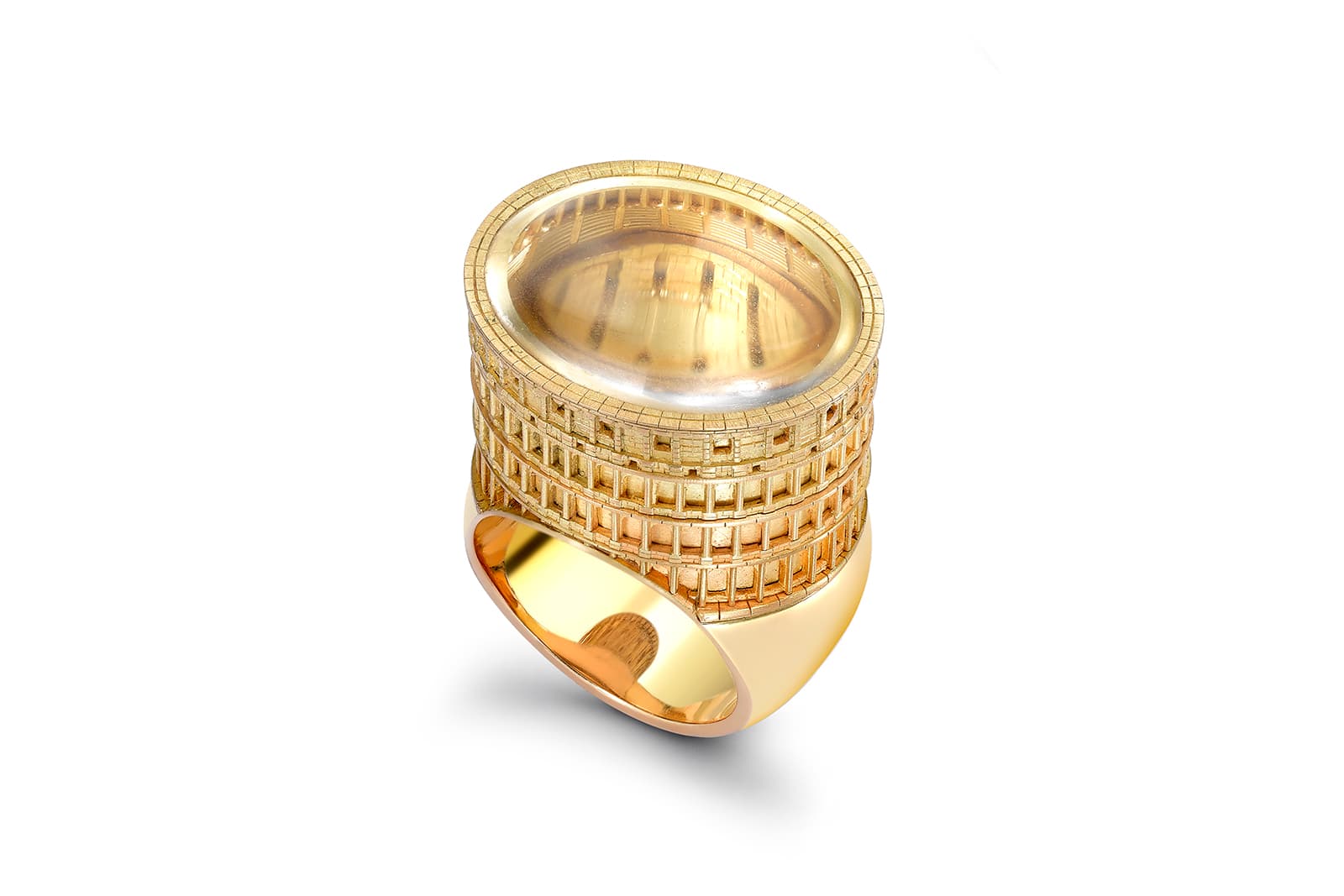 Entirely crafted by hand in Theo Fennell’s London workshop, each opening ring is a collector’s piece, presented in a bespoke box that contains yet more surprises, including, with the Empty Quarter and Slain Gladiator rings, miniature gold magnifying-glass necklets to better admire the micro-sculptures within. “The opening rings are one of my delights,” says Fennell. “I think the box makes the piece complete, like a frame for a painting.” 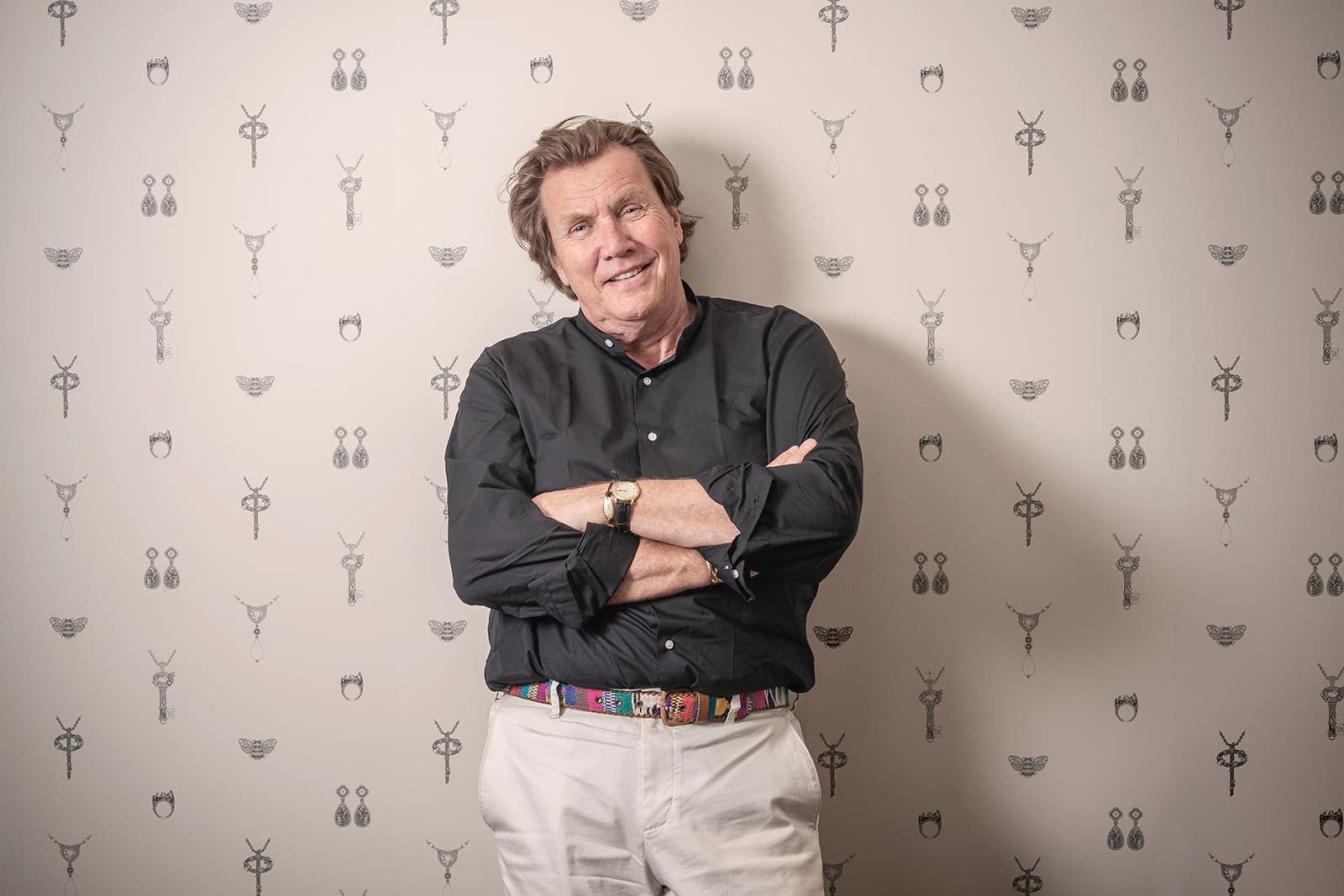 My absolute favourite of Fennell’s opening ring designs is from the archives, the Wind in the Willows ring featuring the kindly Mole and snooty Mr. Toad from the classic English children’s tale. What is so enthralling is the degree of detail on every level, from the animated expressions on the faces of these much-loved characters to the miniature riverbank setting, complete with golden bulrushes. Fennell’s opening rings are adored by collectors, male and female, and it’s not difficult to see why: there is nobody in the world of jewellery creating anything quite like them.