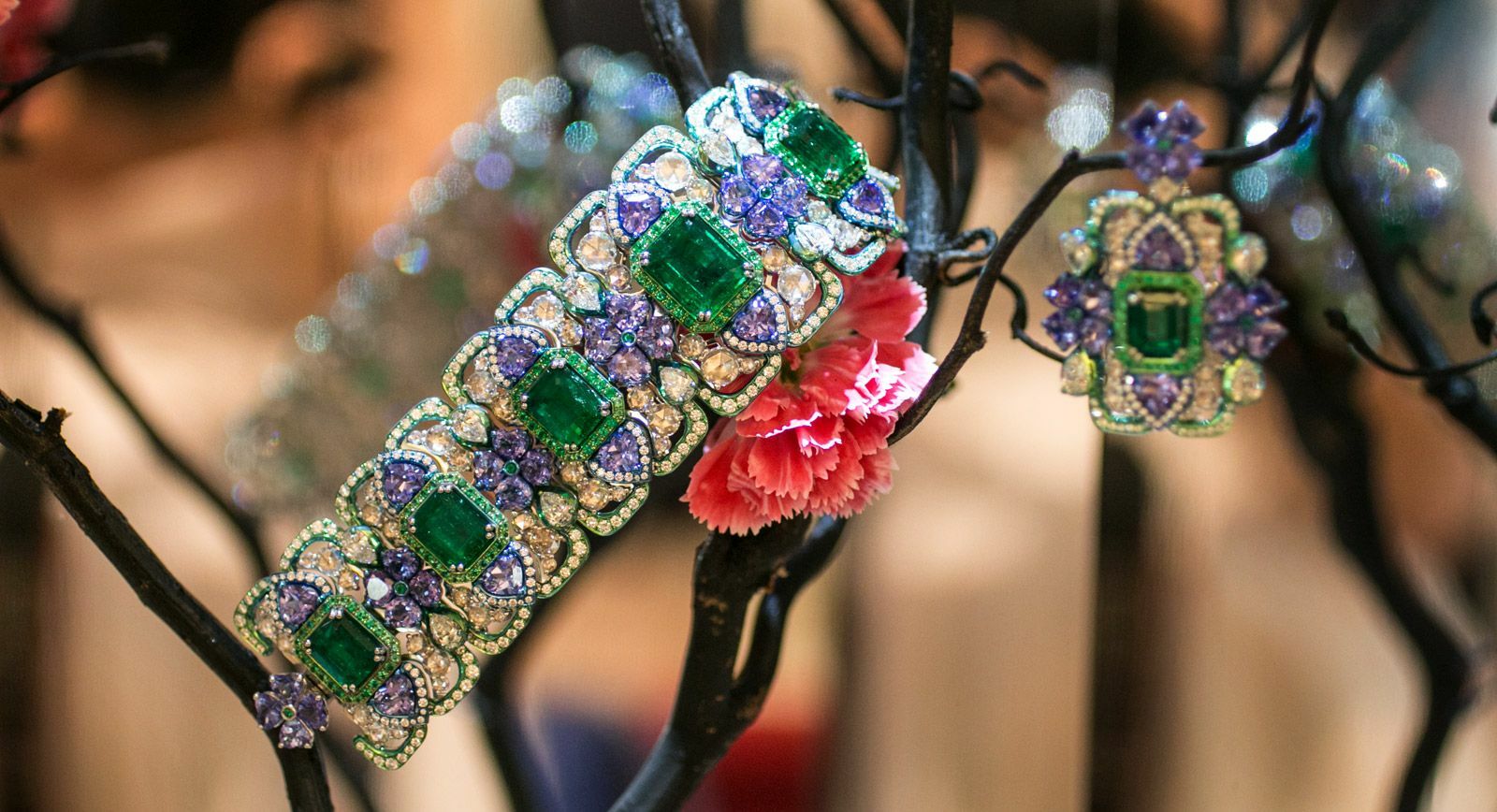 What could possibly be the joint creative venture between the Artistic Director and Co-President of Chopard, Caroline Scheufele, and Chinese fashion designer, Guo Pei? 37 works of art born from the chance meeting of these two women were combined into a single collection: Silk Road. In the framework of Paris Fashion Week, this collection was introduced to the public on the catwalk at the Hôtel Salomon de Rothschild.

The first meeting between Caroline Scheufele and Guo Pei happened in Cannes in 2015, where it quickly became obvious that the two women were enamoured with each other’s work. The Artistic Director of Chopard then invited the fashion designer to visit her Geneva studio and see for herself how the High Jewellery pieces are created. A meeting that took place in September of the same  year was the starting point for the creation of the new collection. United by their search for innovative ideas, the women quickly found a common language in the dialogue between jewellery and Haute Couture. 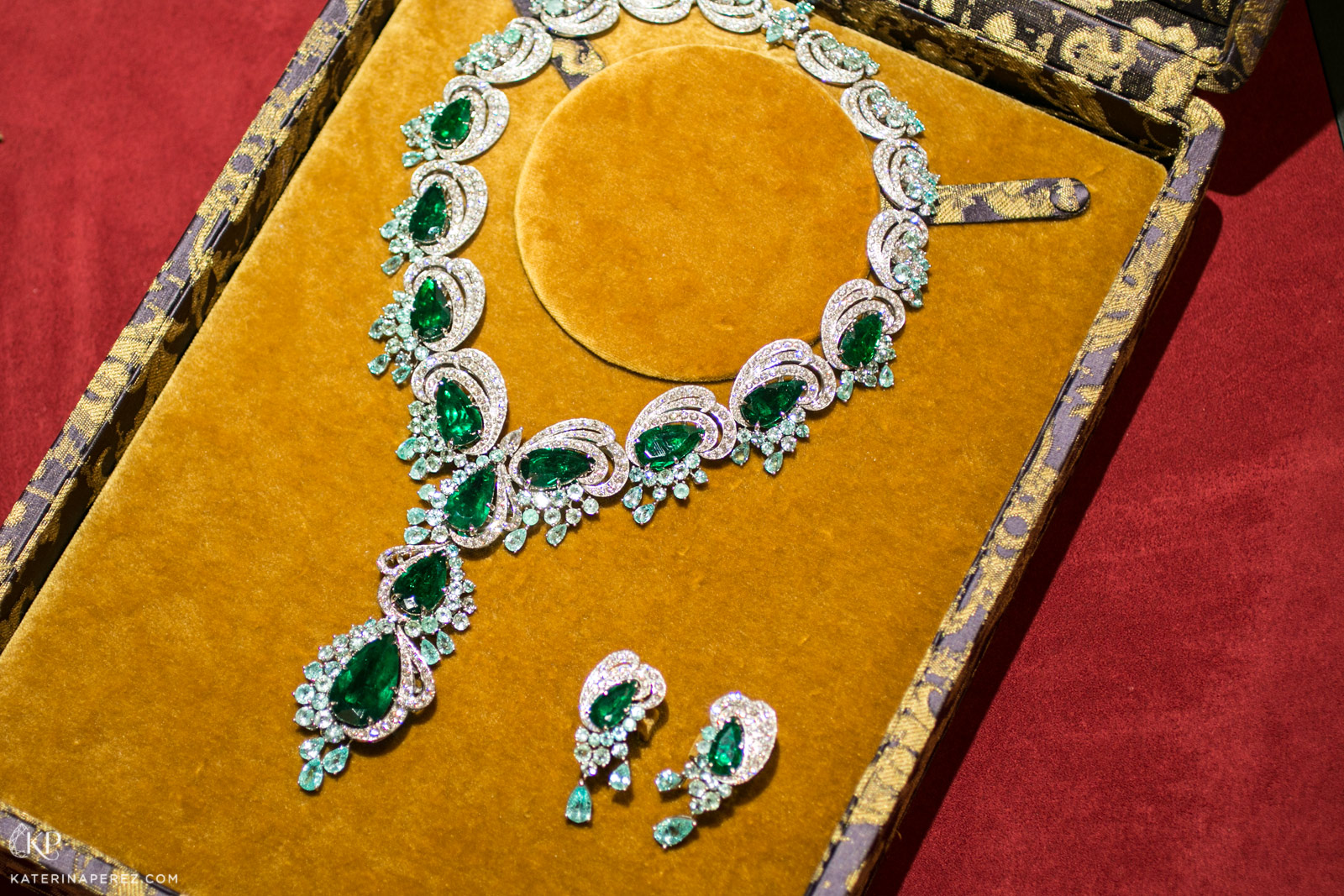 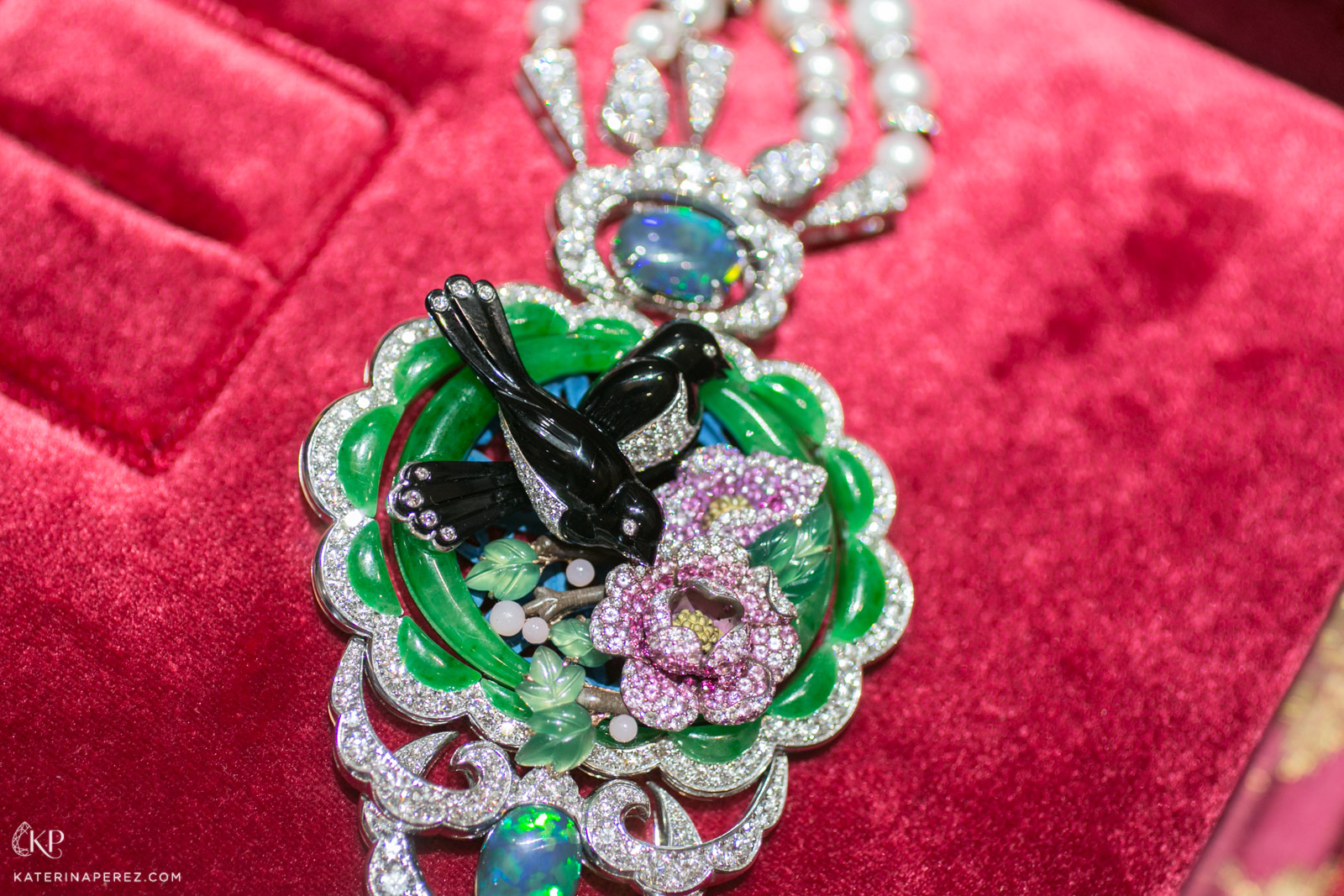 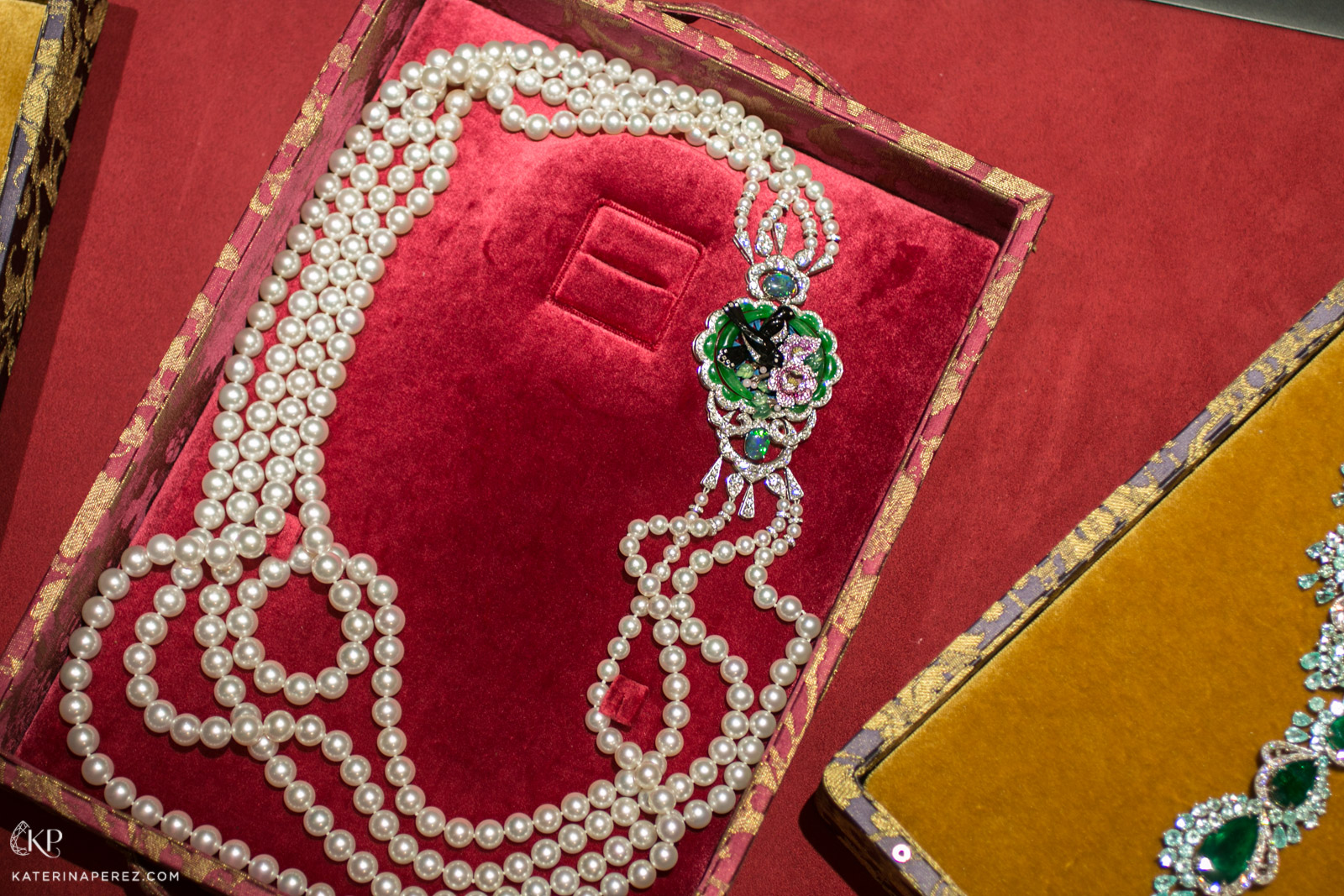 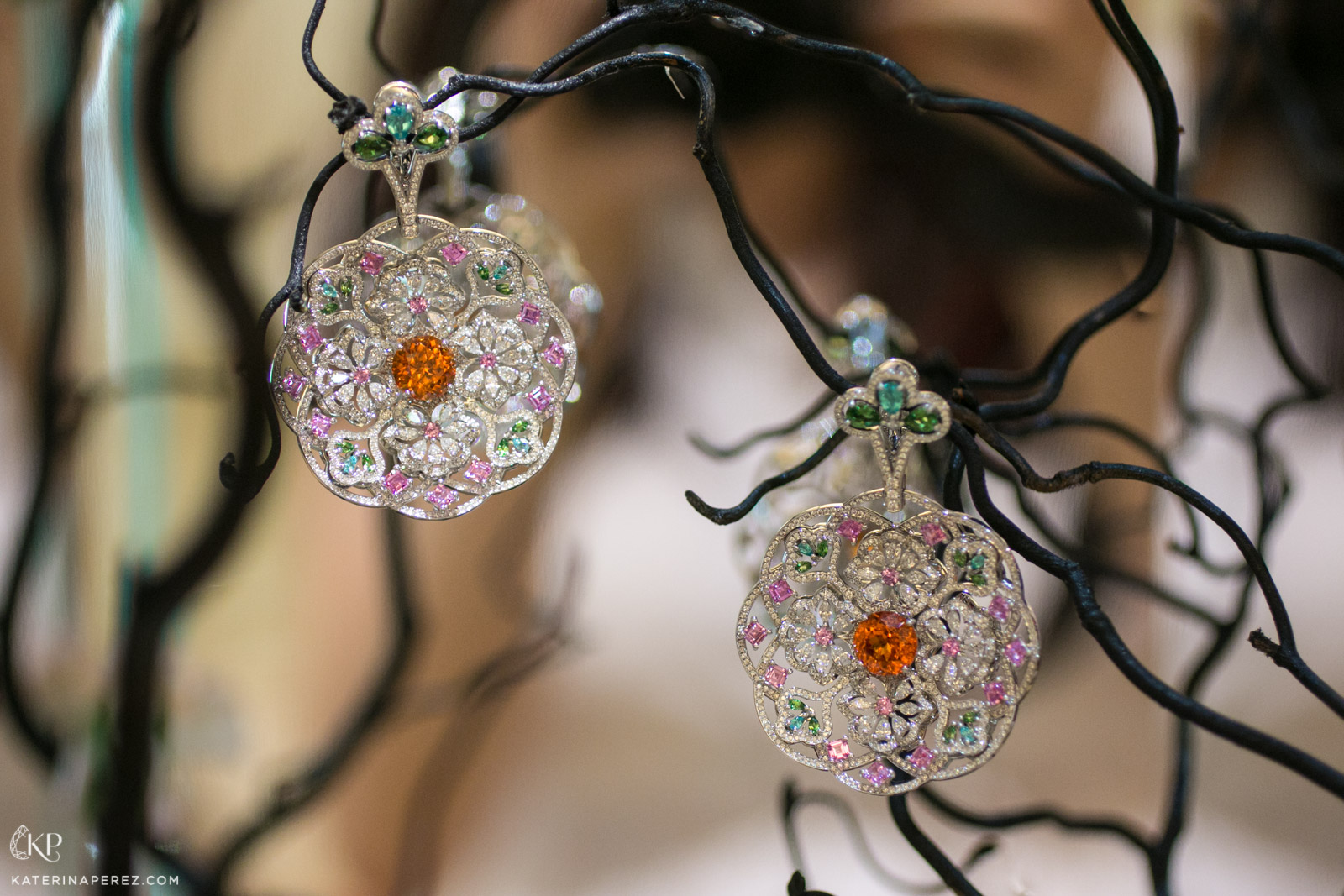 Inspired by the extravagant outfits of Guo Pei, Caroline Scheufele created over a dozen unique items using the most valuable and beautiful gemstones. In additions to large specimens in the classic cut, the Artistic Director of Chopard made use of her work with exquisitely carved gems, as seen on her drop earrings with emeralds and openwork jades in the centre, as well as stones with shapes especially fashioned to correspond to the design, like the bird necklace. Caroline Scheufele also employed sophisticated jewellery-making techniques that allowed her to create pieces not only from gold as she often does but also from such metals as titanium, aluminium and silver.

The resulting creations for the Silk Road collection formed the basis of the clothing line fashioned by the Chinese designer. Taking the creative relay baton from Caroline, Guo Pei made amazing dresses from scratch to match the Chopard jewellery. Architecture, skillfully crafted shapes and volumes, soaring lines, unusual design solutions. unique creative thought and handcraft are the standout features both of the jewellery and the outfits expertly produced by these two admirable women. 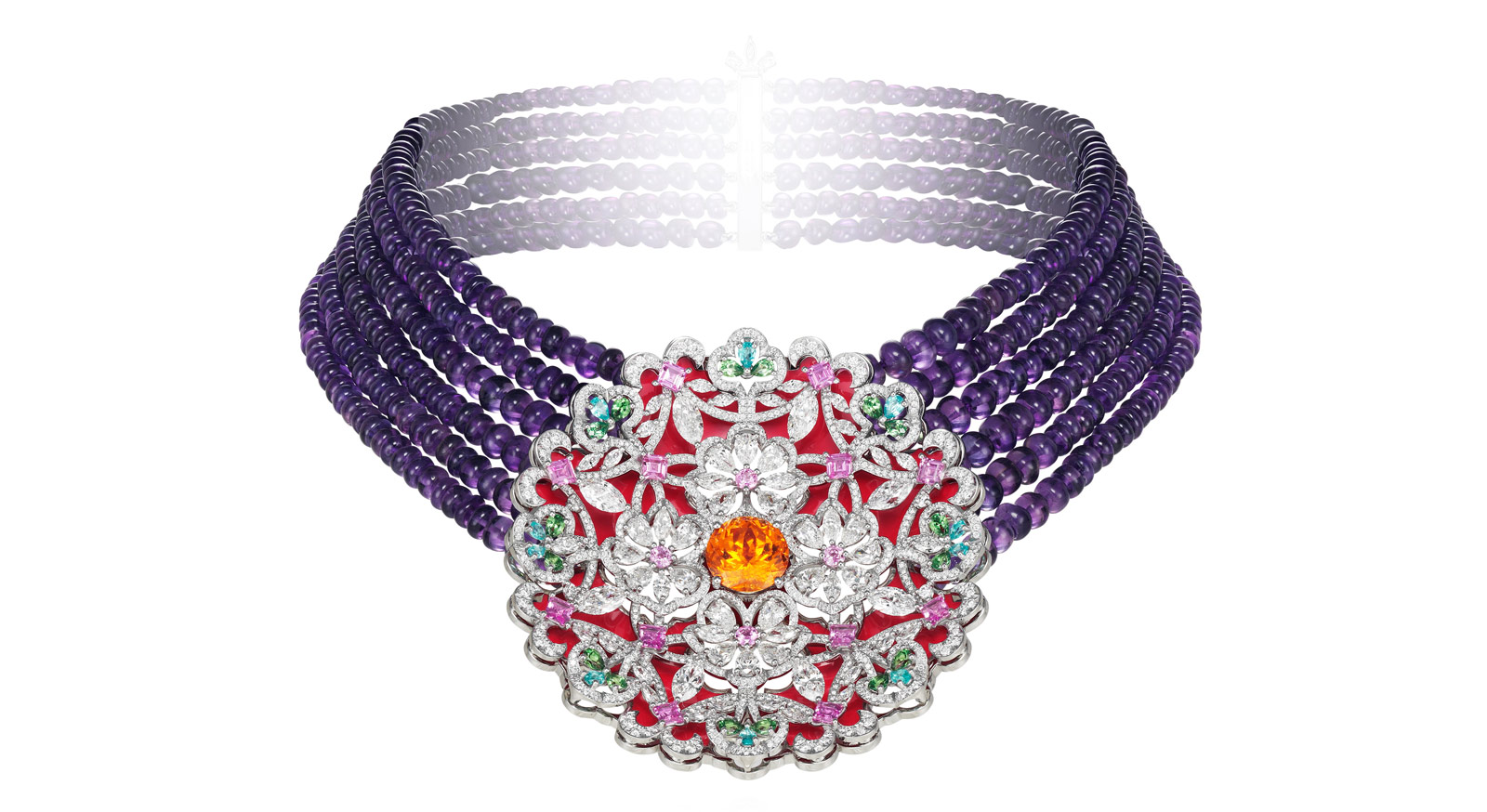 The joint activities of Caroline Scheufele and Guo Pei were based on the common values that the two women share. Asia and its imaginary worlds, aesthetics, colours, a sense of wealth and abundance. Beauty and the sensuality of nature. Pathos and uniqueness of flowers.

Amongst the most impressive and memorable pieces of jewellery in the collection was a set of earrings with a necklace, in which a “pear-cut” emerald is combined with diamonds and “Paraiba” tourmalines. The emeralds used were so perfectly matched in size and colour that one could hardly imagine the amount of time spent by the Chopard gemologists collecting them. The same thought crept into my mind upon seeing the necklace: a statement choker with diamonds and large emeralds designed à la Belle Époque. It was effectively matched to Guo Pei’s embroidered dress that it was simply impossible to tear away my gaze. 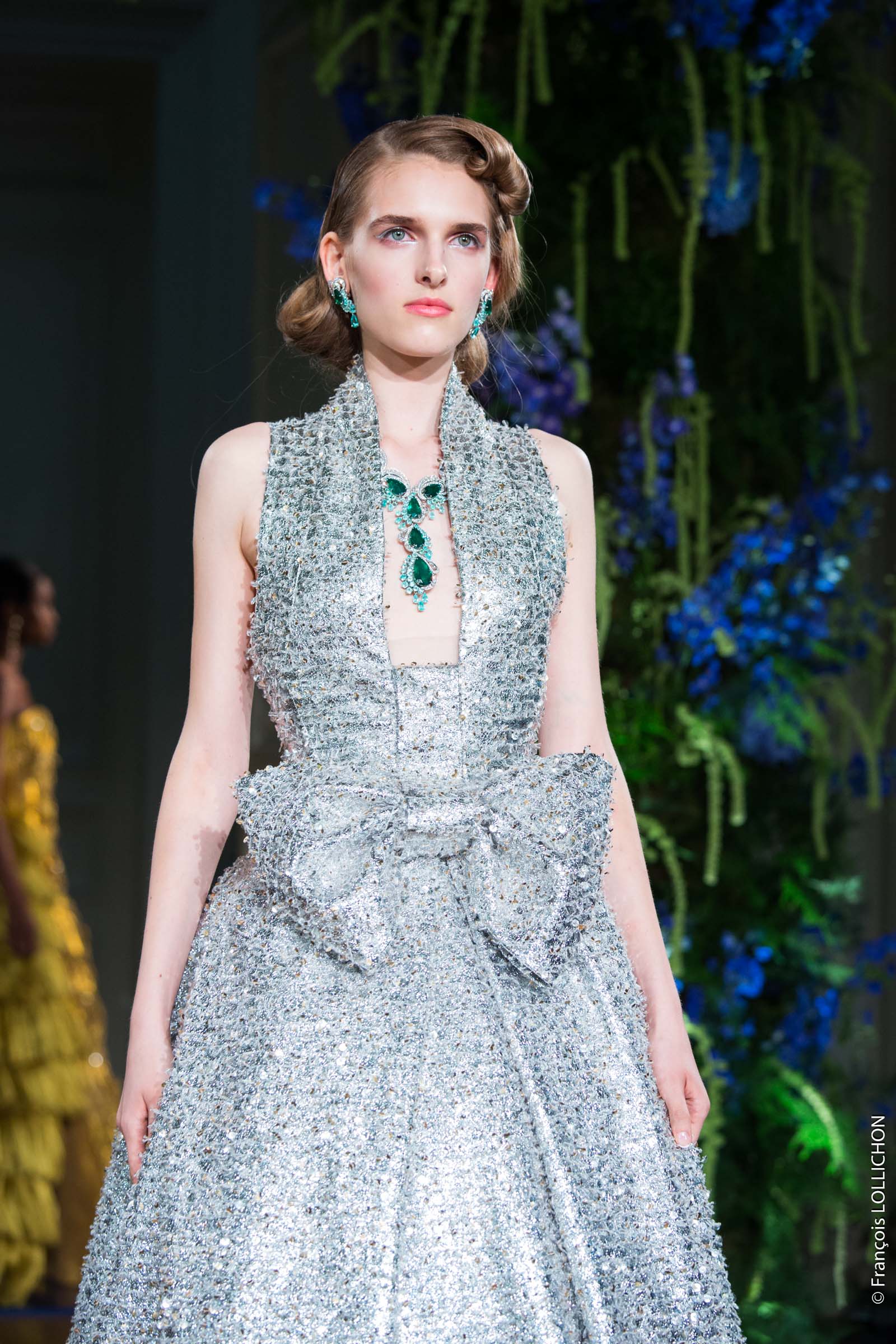 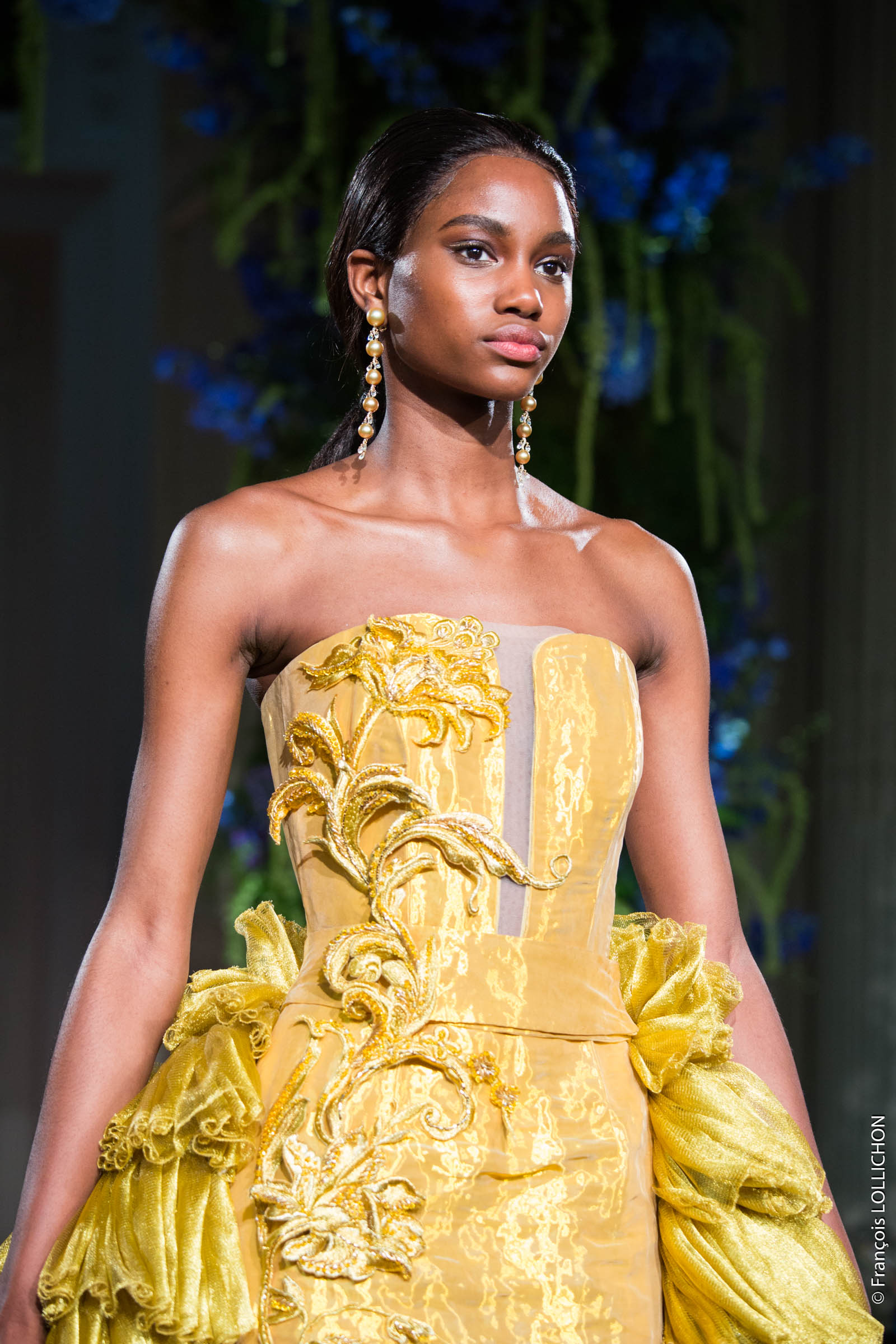 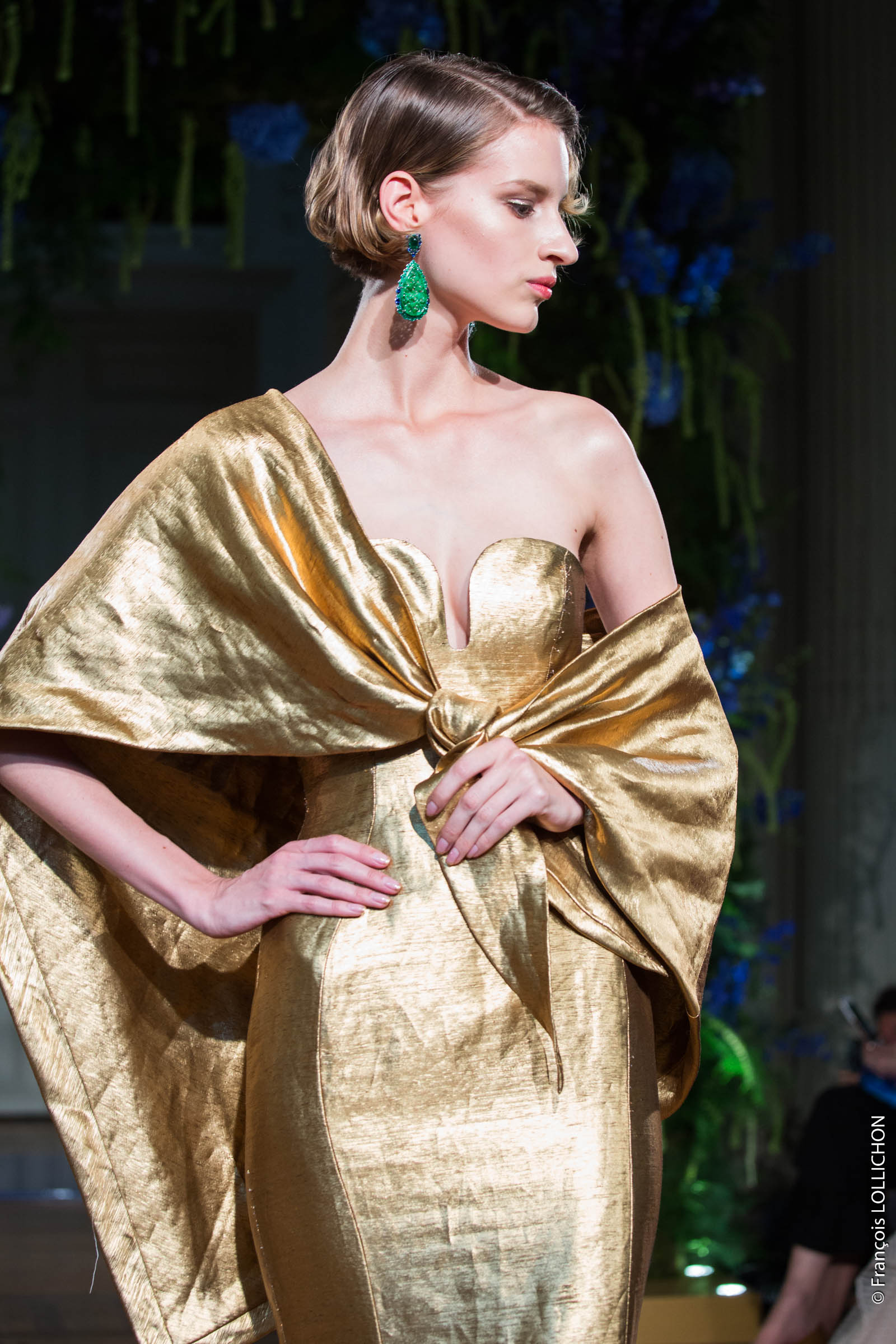 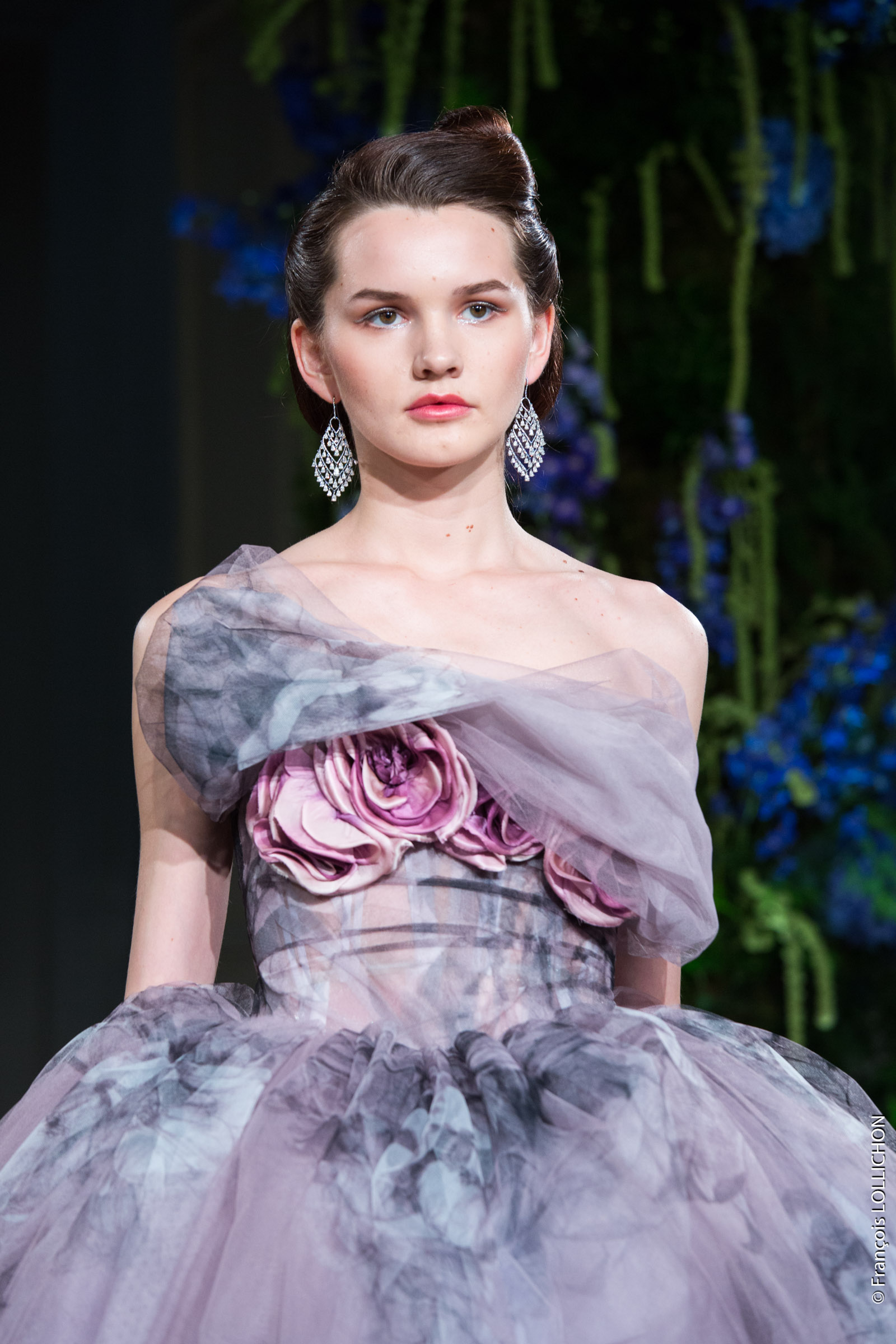 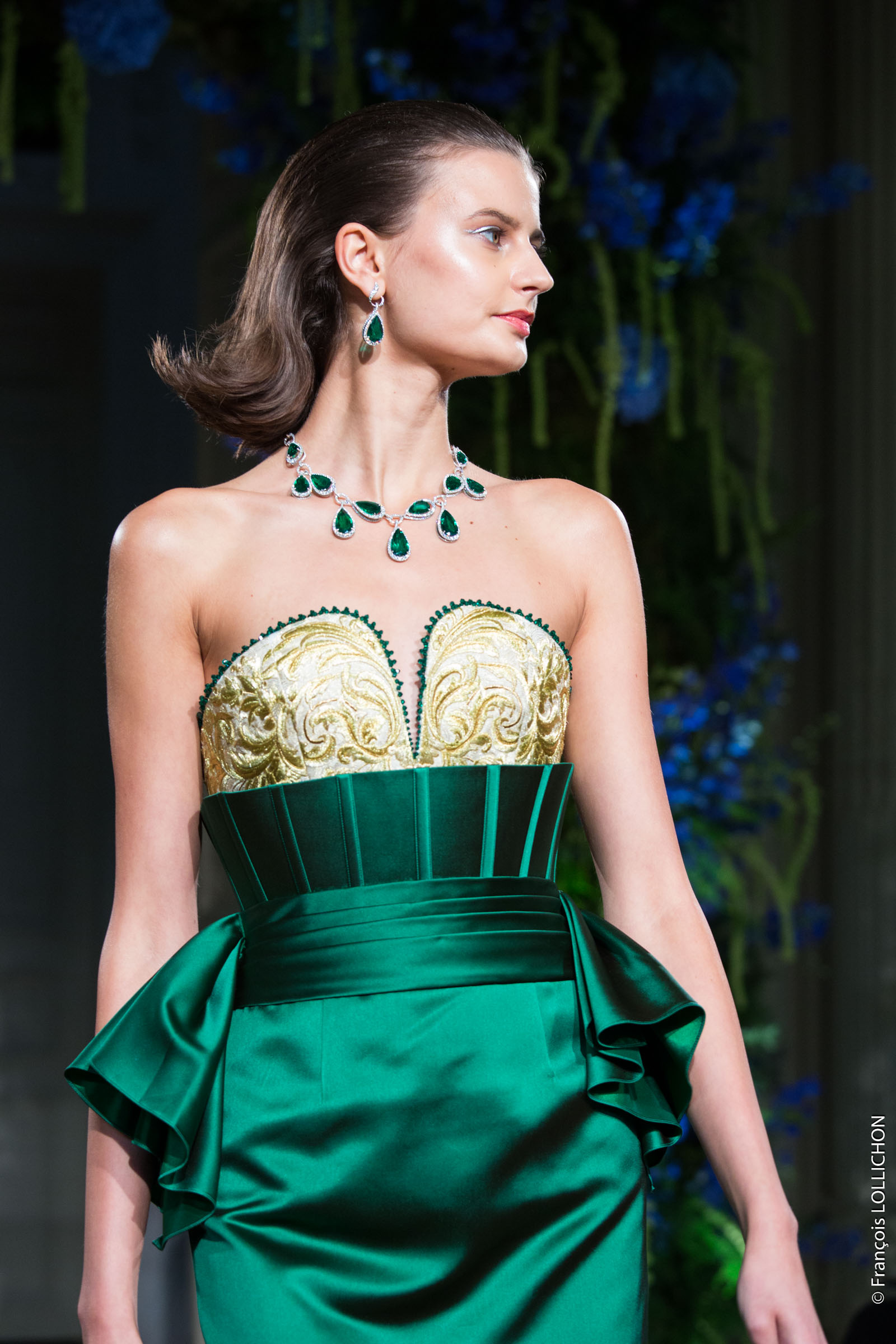 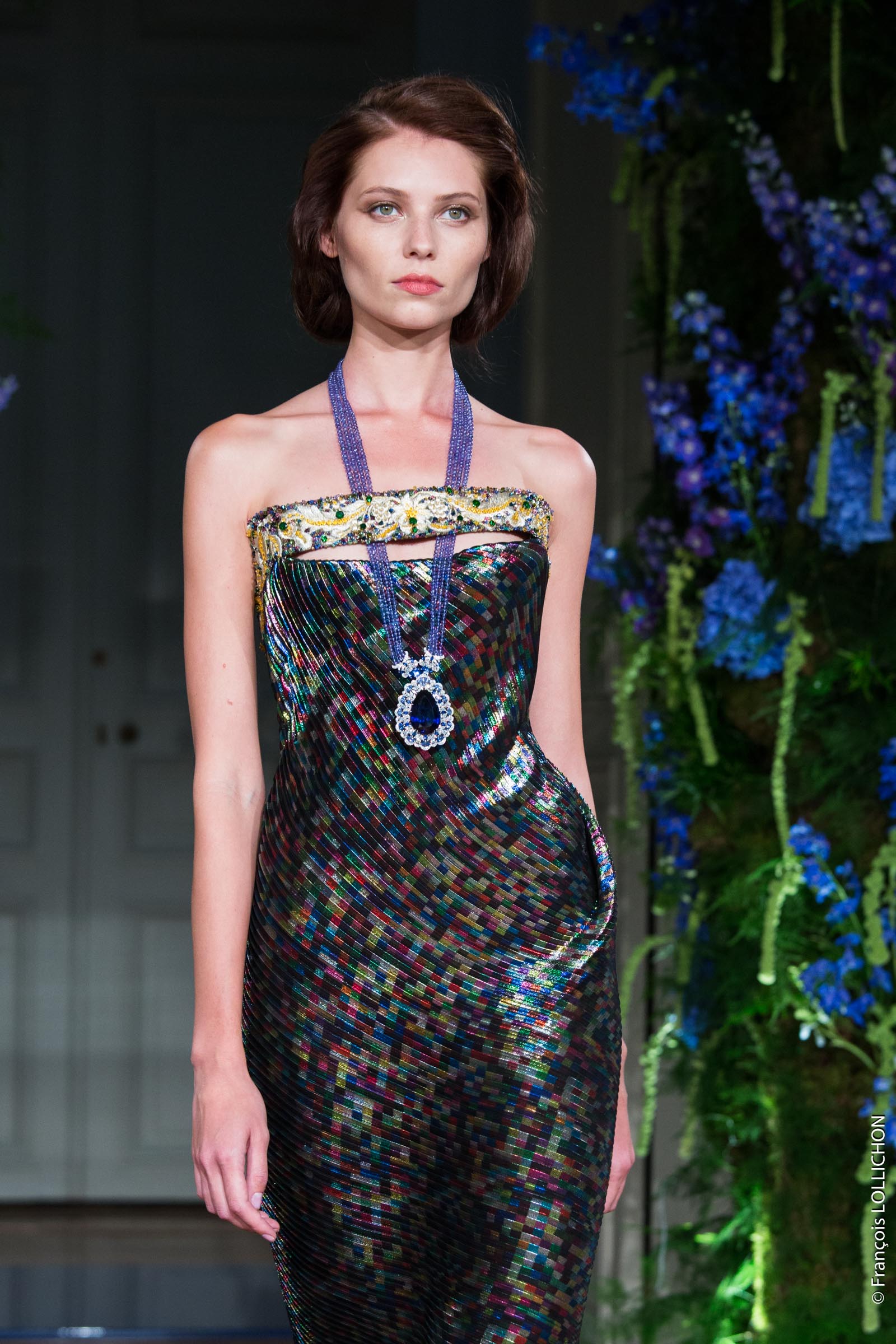 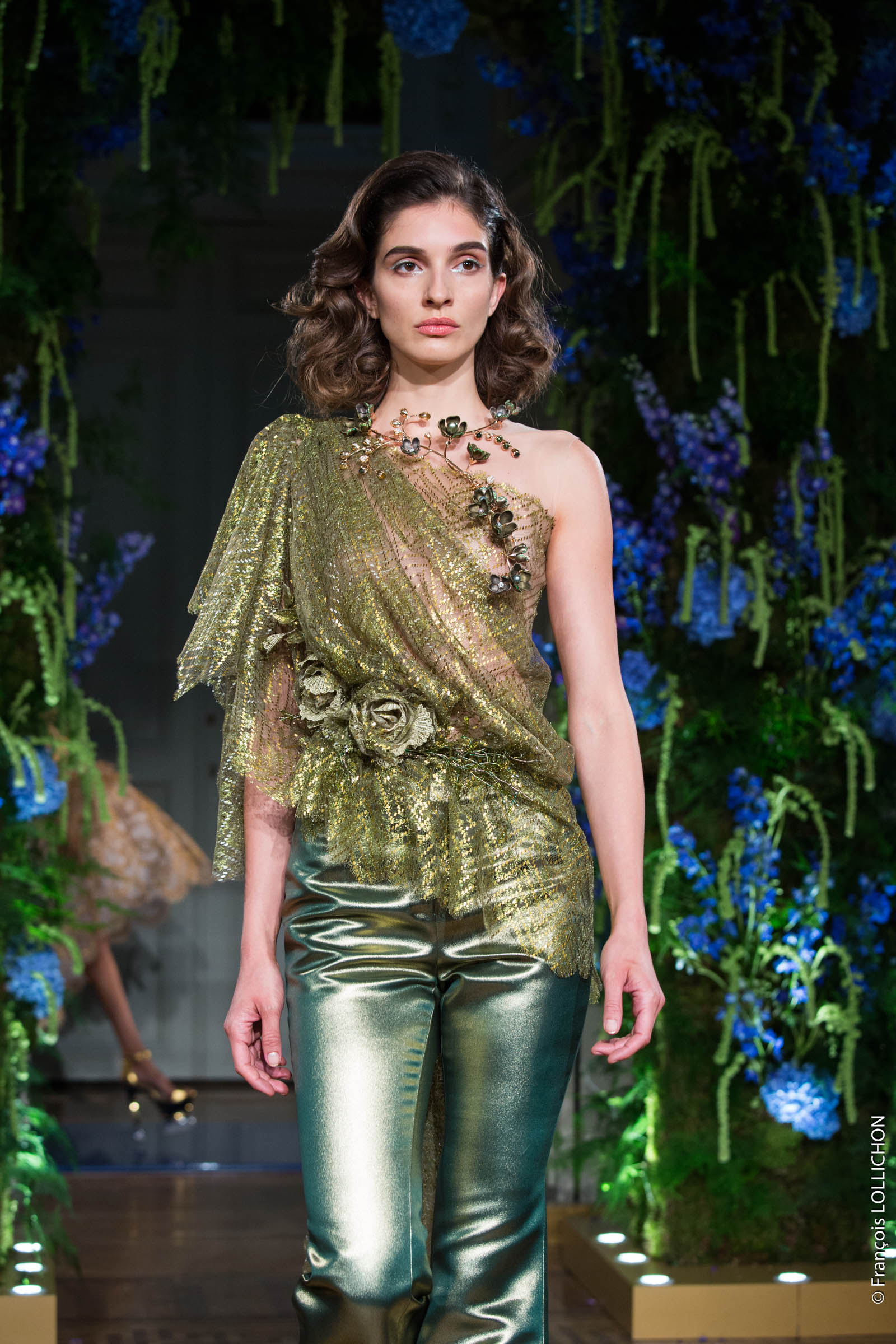 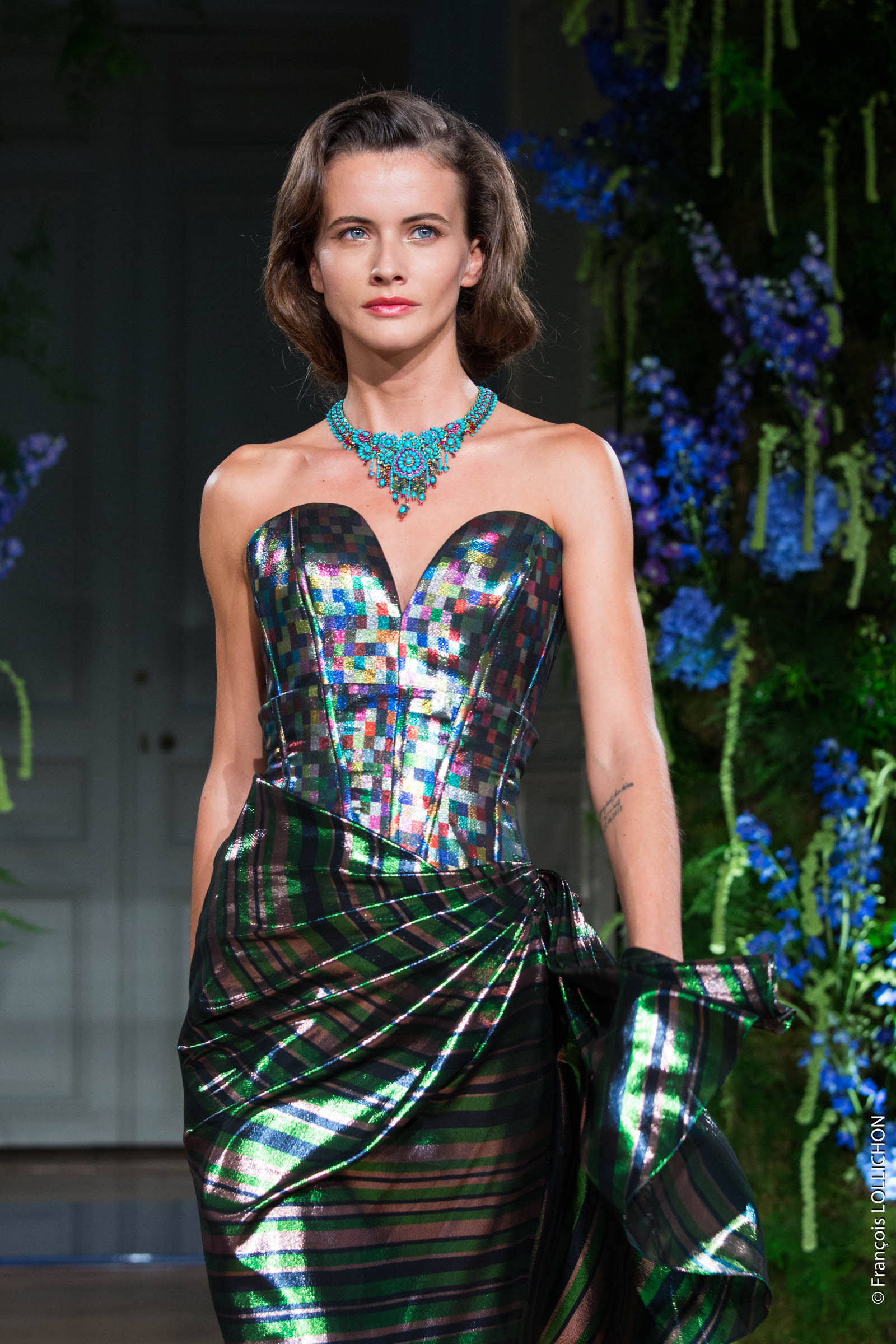 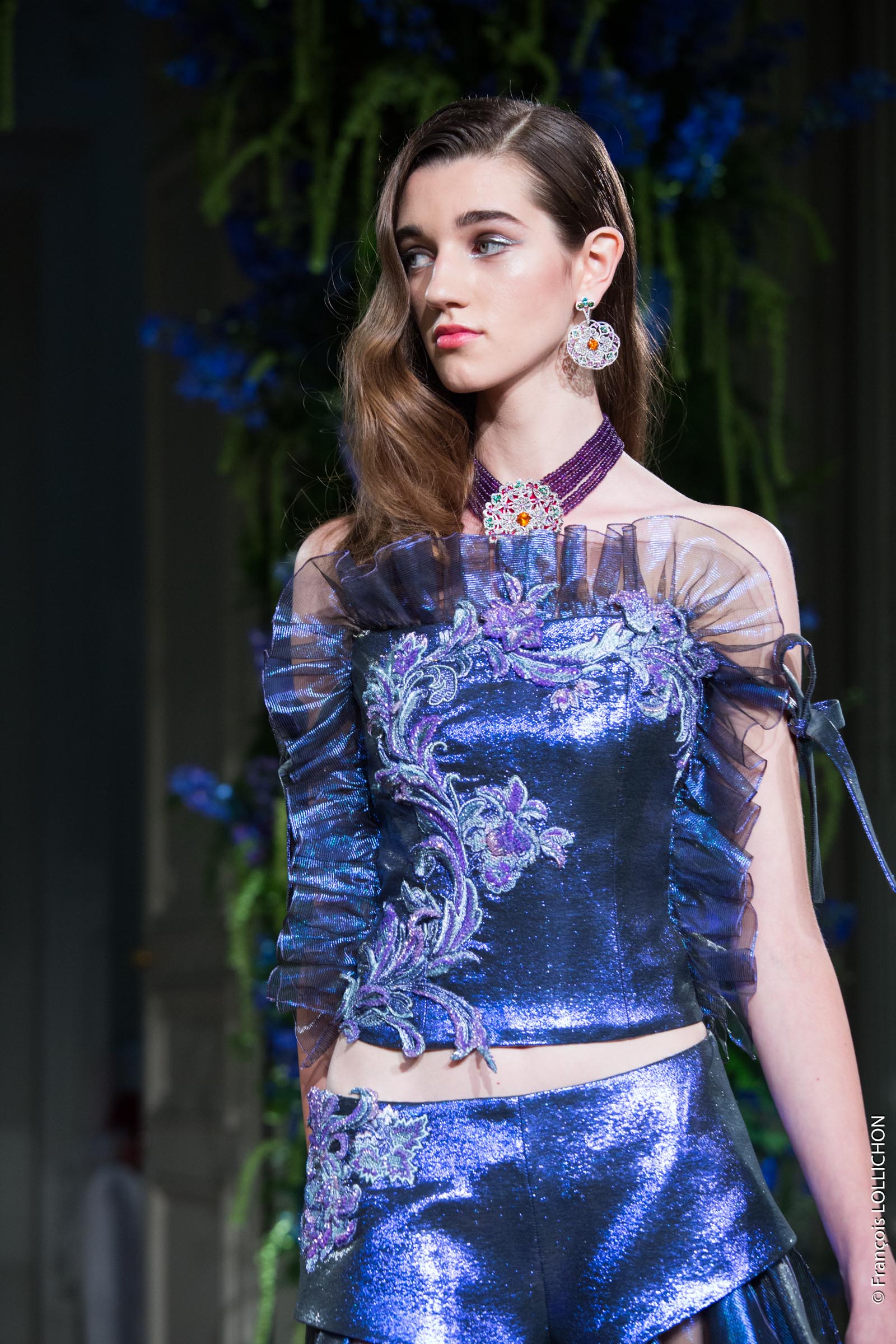 What was generally striking was not only the gemstones but also the design of the jewellery itself. New jewellery interpretations appeared before my eyes, perfectly emphasising the silhouette, with the openwork patterns being borrowed from the world of fashion. A striking example is the diamond necklace in the shape of a collar with a removable central emerald, and an earrings and necklace set made from aluminium, rose gold and precious stones.

Jewellery and fashion will go “hand in hand” until the day women cease to use them as a form of self-expression and adornment… Unlikely! So I do hope that Silk Road will have some wonderful additions to the line in the future.