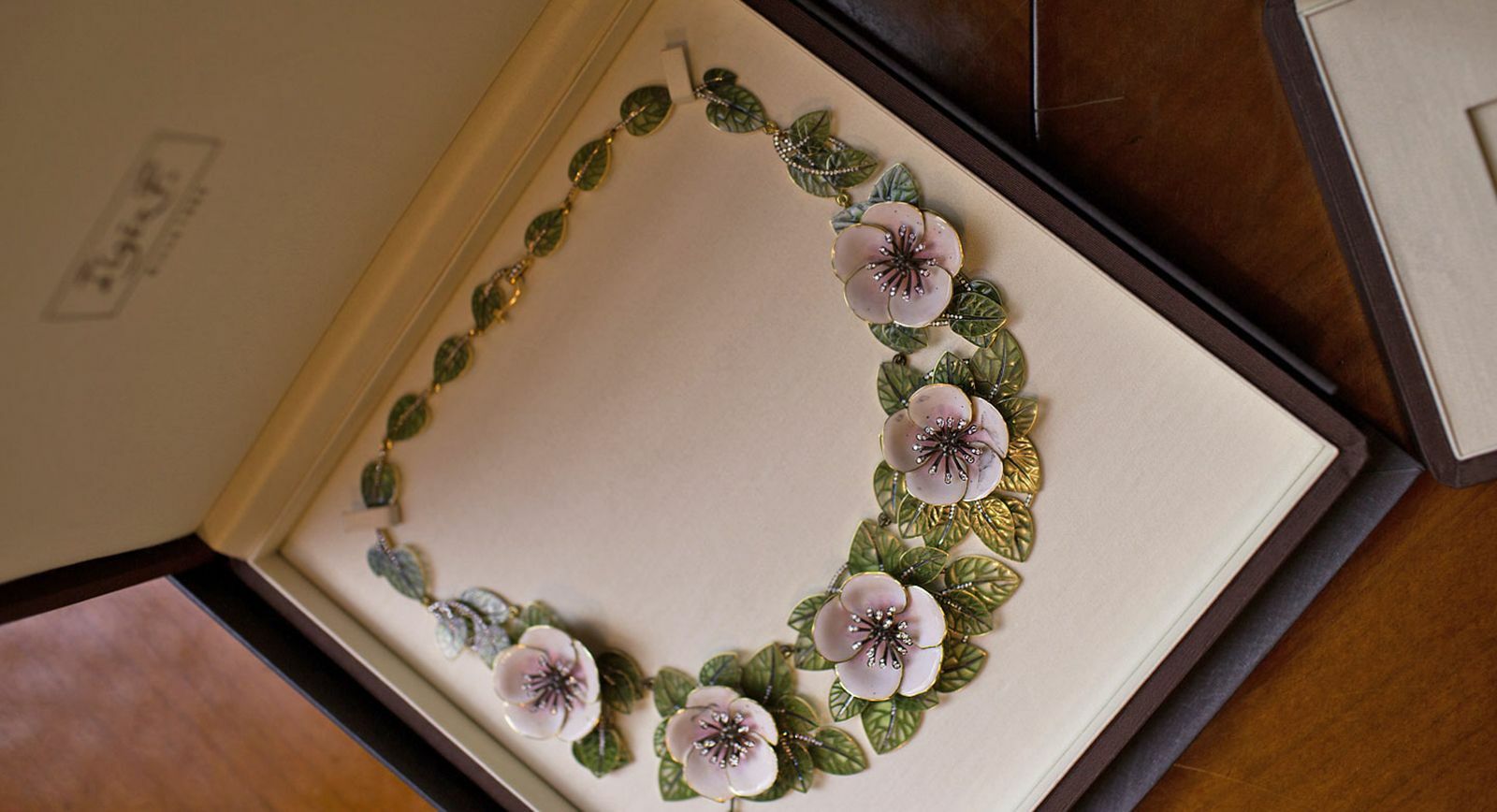 ILGIZ F.: It’s All About the Enamel

Colourful, glittering and smooth – in the hands of an artist, enamel is capable of the most unpredictable transformations. Works of enamel can be compared to the works of the impressionists; such is the extent to which an auteur can both lyrically and subtly communicate his/her temperament.

Today, the number of highly experienced professionals is significantly smaller than it used to be because working with enamel is technically difficult and labour intensive… Nonetheless, artists on a par with the legendary Lalique and Fouquet do exist and one of them lives and works in Moscow: Ilgiz Fazulzyanov, known as the “king of enamel” in professional circles.

Ilgiz developed a technique of working with this material over twenty years ago and since then enamel has been an inextricably regular feature of his jewellery. The pieces, released under the brand Ilgiz F., are unusually expressive, bright and unique. Even the maestro himself couldn’t make two identical pieces. Why? You shall find out if you read the following interview in which Ilgiz tells us all about the different varieties of enamel and shares some of his experiences in working with this “precious glaze”. 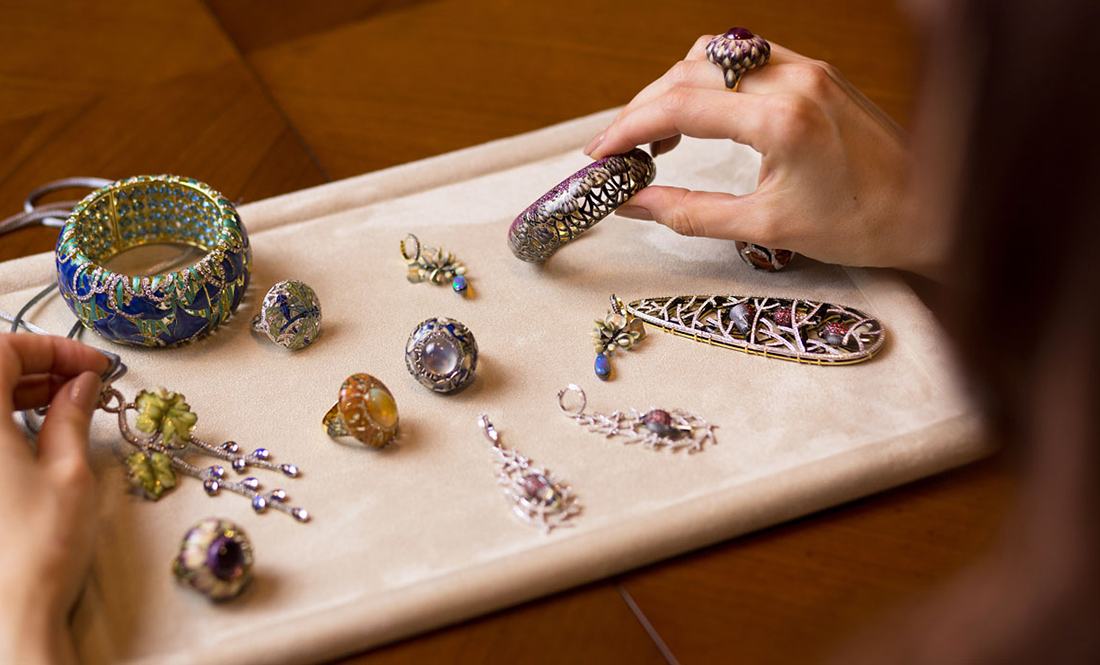 K.P.: Ilgiz, as a form of introduction, let’s delve back into the distant past when you found yourself in the jewellery business after specialising in painting, silk designs and stained glass.

I.F.: If we’re going to start with my past, it’s worth pointing out that my education was a very academic one. I’m essentially a painter. Life steered me towards jewellery but there was never enough colour in it for me! As an artist, I long to work with a broad palette of colours because with colour you convey the mood and character of a piece. In 1997 I came across enamel and learnt how to work with it within literally a month. I then redid an entire collection I had intended to display at an antiquarian exhibition in France.

K.P.: And how was this “trick” of yours technically possible? It can’t be as simple as using watercolours which you just mix with water and then paint with…

I.F.: In fact, the more I work with enamel, the more I’m convinced that as well as understanding the techniques behind using it, it’s also a matter of instinct, of truly understanding the material. My instincts with enamel are the same as those that people have in everyday interactions. If an artist’s intuition is well-developed, then everything falls into place. Sometimes my colleagues use enamel and it just doesn’t work; it looks cloudy and splits. I then work at it and the problem’s solved. It’s inexplicable, no?

K.P.: You say that everything depends on the artist’s intuition, so for some jewellers enamel is just a material, but for others it’s something that has to be “felt” and understood.

I.F.: Yes exactly. Let’s just establish what enamel is: it’s a natural form of quartz. Quartz holds both information and energy so you have to “converse” with enamel in its own language if you work with it. You have to sense how thick a layer should be applied and in what way. Because it’s very difficult to affix enamels to each other, the cloisonné technique is often used: little balls are soldered to the metal surface of an object and filled with enamel chippings which are then kiln fired. The result is a colourful mosaic and blocks of colour. There are now few who can accurately combine enamels and however well a jeweller can connect them you can’t just combine any old colours. 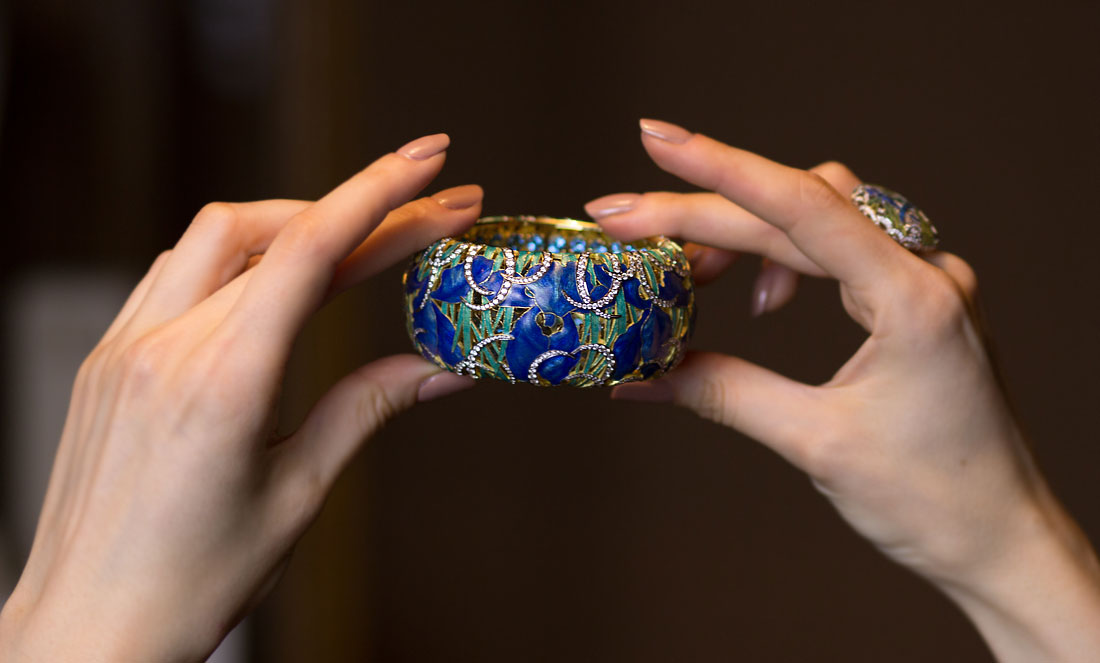 K.P.: Just listening to you now, I’m starting to realise how complex it all is.

I.F.: Yes, it isn’t easy working with enamel and it’s even harder working with vitreous enamel. Vitreous enamel requires one of the most refined and tricky techniques in jewellery making: a bottomless chiselled metal ornament is filled with quartz fragments, creating a layer of semi-transparent material. Vitreous enamel is often only used on flat surfaces but by applying the laws of physics and mathematics I was able to change the rules; I could put vitreous enamel on the curved edges of a jewellery piece, on a ring in a tessellated pattern for example.

K.P.: Can you explain the process in a nutshell for those who know nothing about it?

I.F.: The enamel is like glass fragments that are crushed to as small a size as possible. A small brush or rod is then used to create a thin layer of it on the surface of a jewellery piece and it is kiln fired for an exact amount of time at an exact temperature.

K.P.: And how does enamel acquire colour? Can it acquire any colour at all?

I.F.: To give enamel a particular colour, a certain number of special coloured components (pigments and dyes) have to be added. With these, almost any colour can be achieved. I once met with a Japanese jeweller who had come to Moscow to exhibit his work and when he saw that my work included scarlet enamel he admitted that he’d worked his whole life to try and get that colour. He’s yet to manage it so you can see why I’ve chosen to say that it’s possible to achieve almost any, but not every, colour. This final red colour here is very rare and difficult to get right; there are a vast number of nuances to handling it. 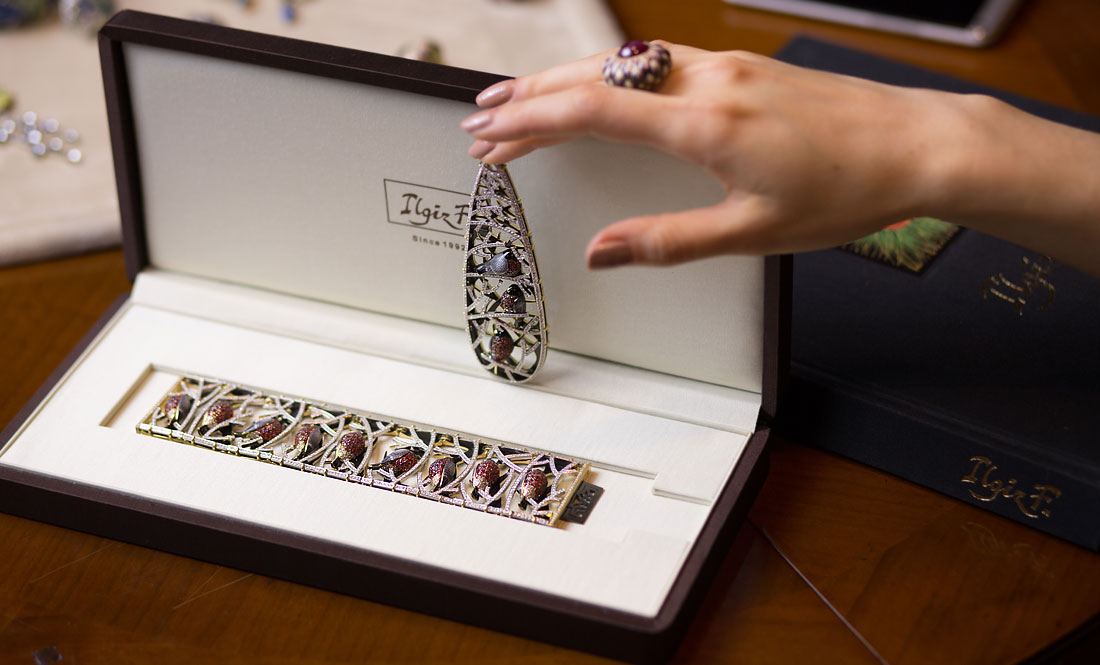 K.P.: What nuances to you have in mind?

I.F.: Firstly, the piece has to be constantly observed whilst in the kiln to know what layer of enamel to apply and at what stage to take it out of the kiln. If the layer is too thick then the colour will be dull; if the quartz is applied too thinly then it’s just impossible to say what will ultimately happen: a red colour, for example, could turn orange. It has to be understood how long the piece should be kept in the kiln and how to cool it: it can be cooled gradually, suddenly, using the usual method or next to the kiln.

K.P.: As I understand it, enamel is not always perfect by the end of the process. It can break and crack.

I.F.: It all depends on the type of enamel. Alongside the hot and low temperature (cold) varieties, there are other types which can be hardened under an ultraviolet lamp. They all differ in terms of their durability. The enamels I work with are made at a high temperature. I heat them to a temperature of 950 degrees, allowing the metal and the enamel to join solidly.

K.P.: So they sort of fuse together?

I.F.: Yes. The initial melting temperature of gold is 900 degrees but for enamel it’s 950 so when the upper layers of the gold start to melt, the enamel begins to eat into it. But gold heats up very quickly so the main thing is to pull the piece out of the kiln at the right moment to prevent it from melting entirely. The most difficult thing is to “catch” that moment. That’s also why it’s impossible to make pieces like mine in bulk.

When a series of precious jewellery transforms into a class of high jewellery creations, each piece has to be looked at separately and in small groups. Every work that has coloured this interview has its own character. This serves as a wonderful example of how modern jewellers have surpassed the common boundaries of stock creations and turned enamel into a unique art form. 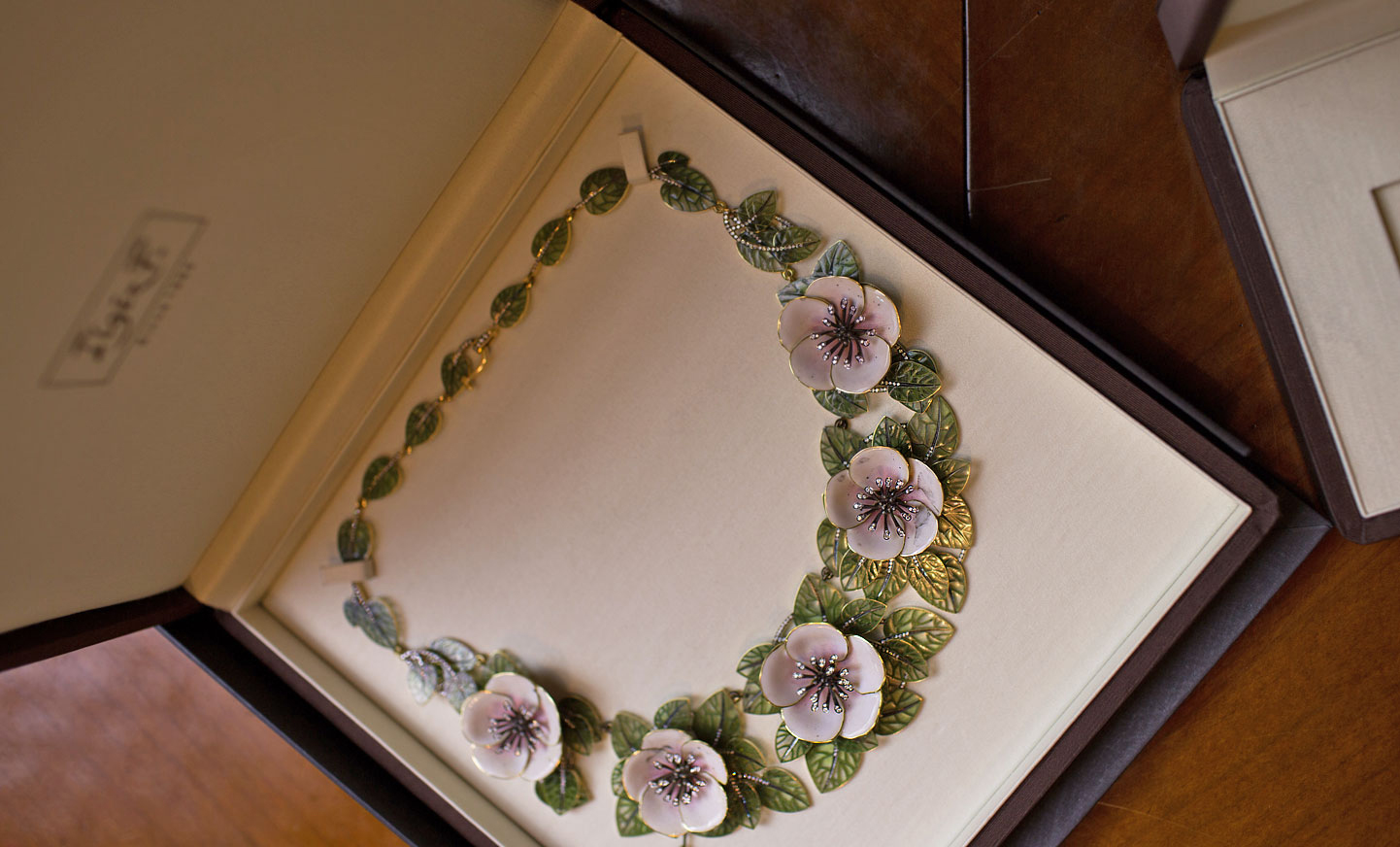 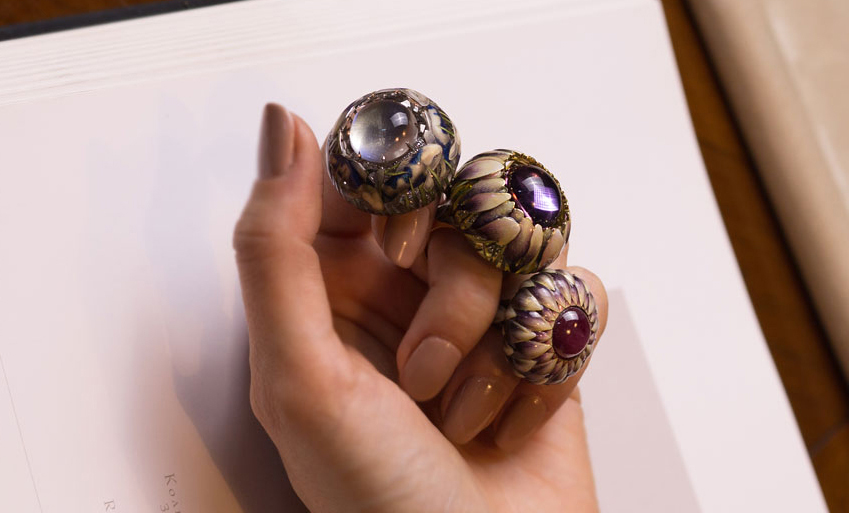 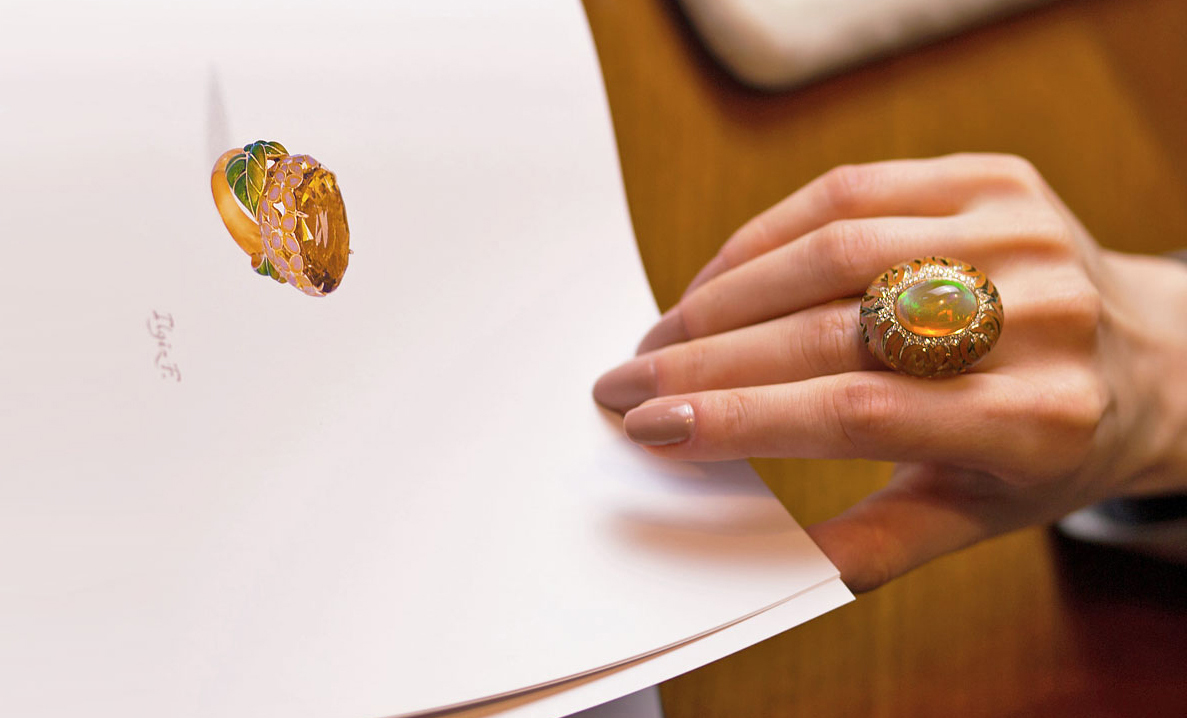