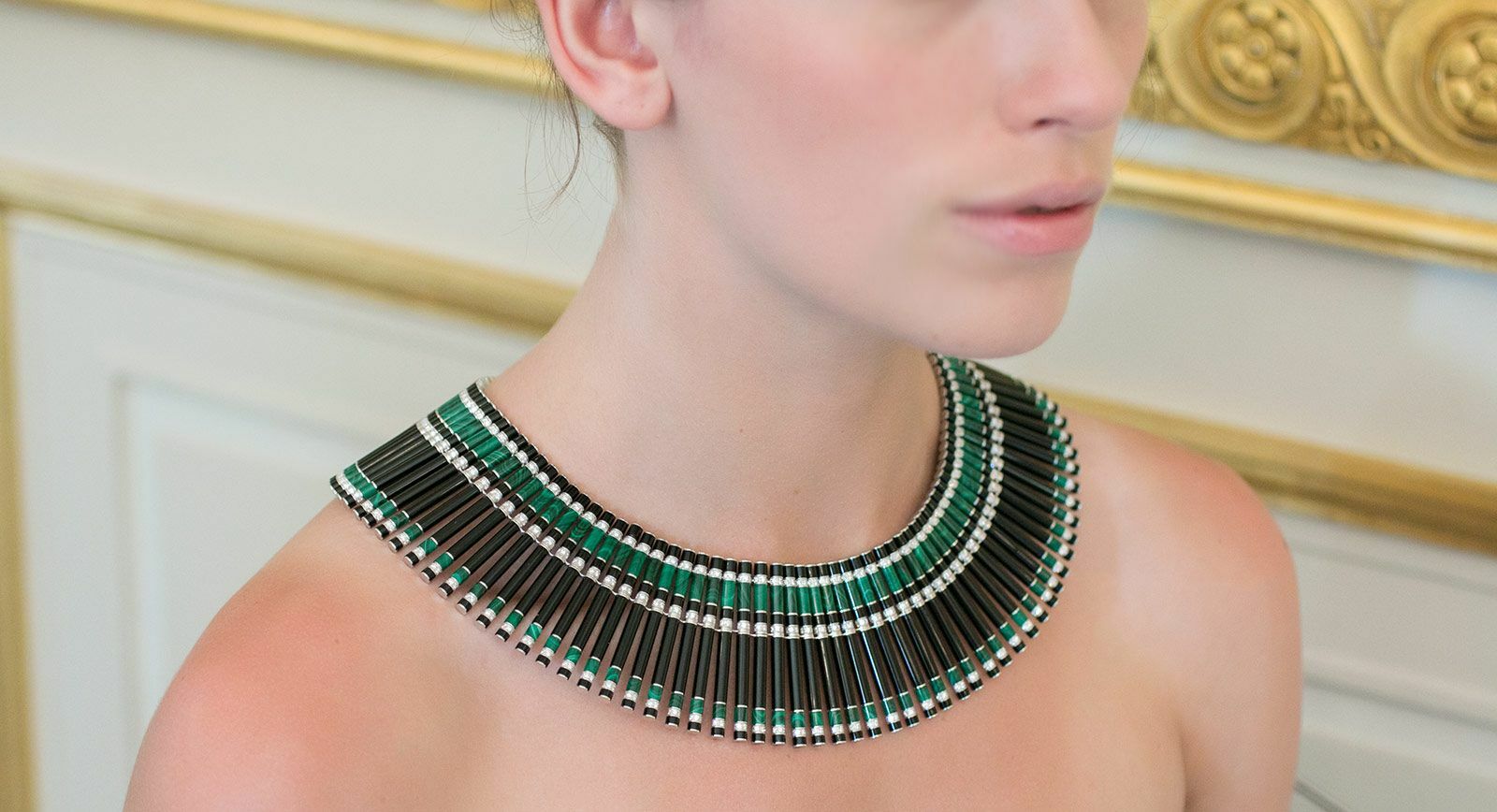 In 2014, I wrote an article about precious sautoirs and earrings with tassels, because back then these playful features appeared to be at the peak of their popularity. They could be found not only in jewellery, but also adorning clothes, shoes, and various accessories. Four years later, in 2018, gem and pearl tassels returned to the world of high jewellery in droves and this year, at Paris Haute Couture week, it seems that they have been joined by gold and gem embellished fringes.

Tassels originate from the time of Tutankhamen – indeed these adornments were actually found in Pharaoh’s tomb. In his book Tutankhamen: The Son of Osiris, Christian DeRosh-Noblkur writes that "Following the leaders of Vavat, young Nubian princes and princesses with delicate facial features could be seen wearing Egyptian clothing, but Nubian tassel earrings..." Even in Ancient Egypt, this design feature was exclusive to high-ranking people, and was - like the gem encrusted gold with which Egyptians adorned themselves - considered a symbol of great wealth. In this sense it is no wonder that tassels migrated from textiles to become a crucial element of jewellery design. 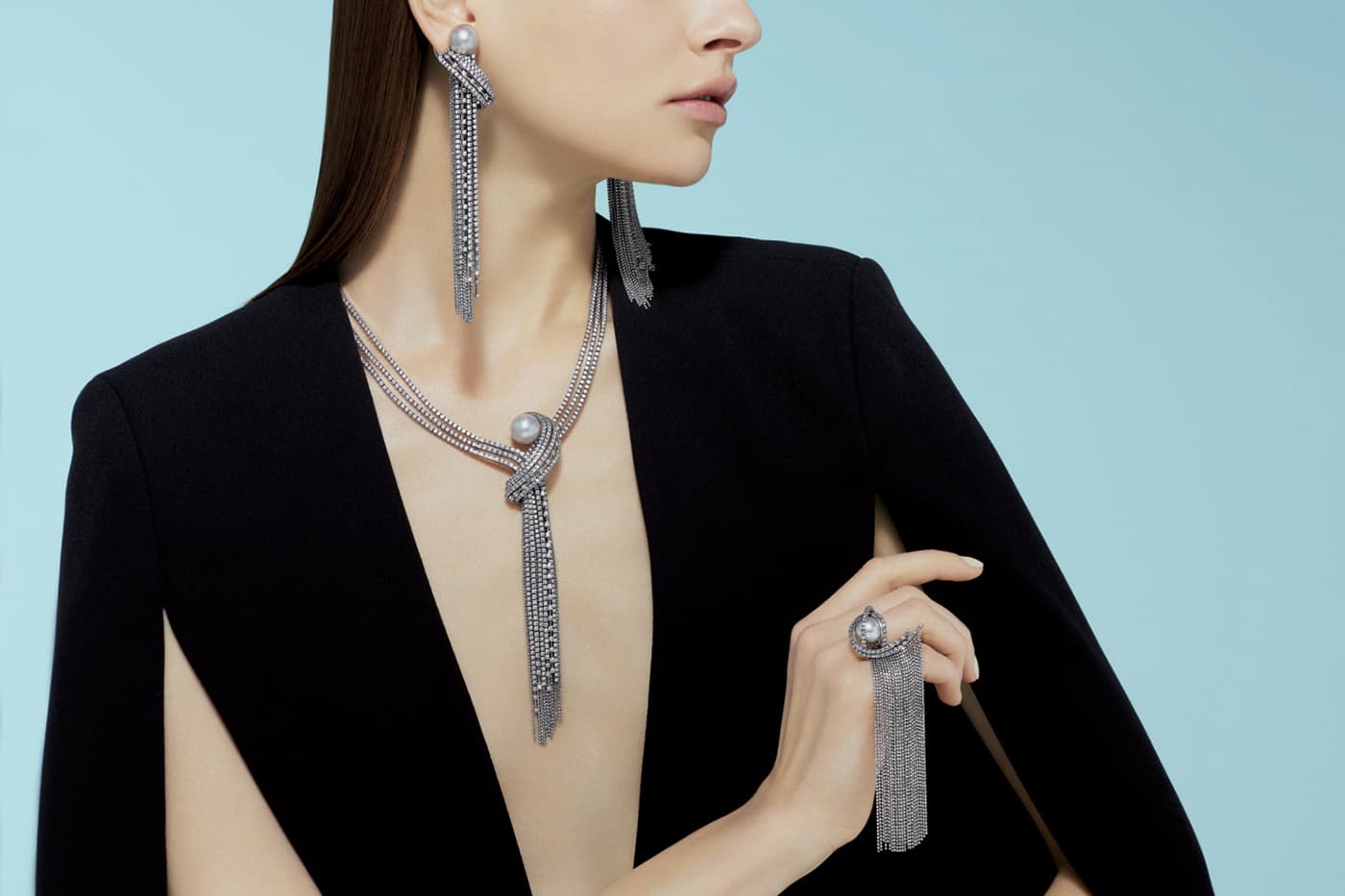 Going back to high jewellery of 2019, the clustered gems adorned almost each new collection of prominent Maisons. Emerald tassels were, perhaps,  the most popular motif seen at Boucheron, Van Cleef & Arpels and Piaget in their transformable necklace. The Boucheron sautoir from the ‘Paris Vu Du 26’ collection, entitled ‘Verrier’, is inspired by the great dome of the historic Grand Palais. A detachable brooch made of rock crystal and diamonds in white gold depicts a bird’s eye view of the iconic museum. In turn, the pendant depicts the famous vast dome of glass that covers a marvellous garden of titanium plants. As part of the jewellery set, there are also earrings with emerald tassels which complement the necklace. 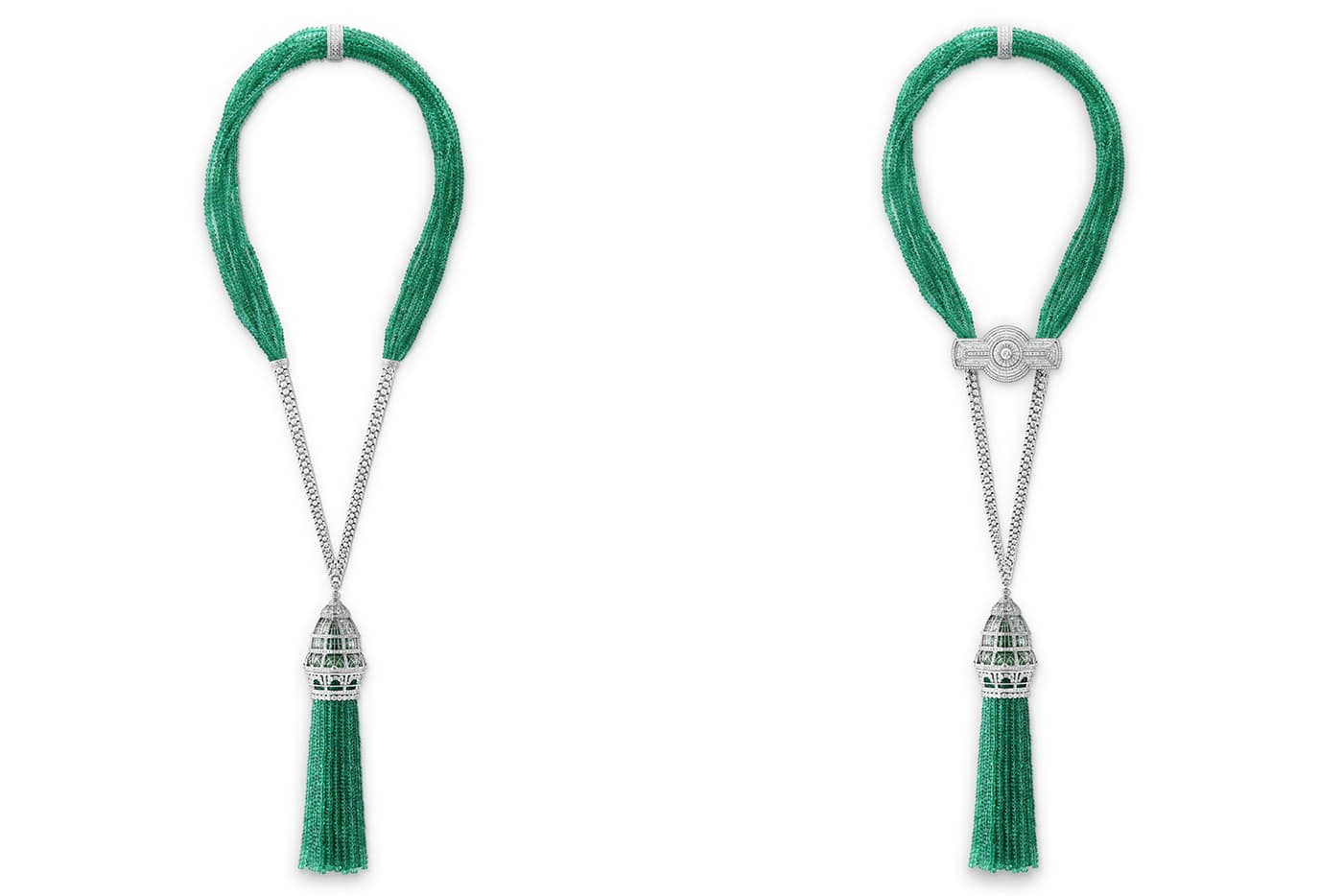 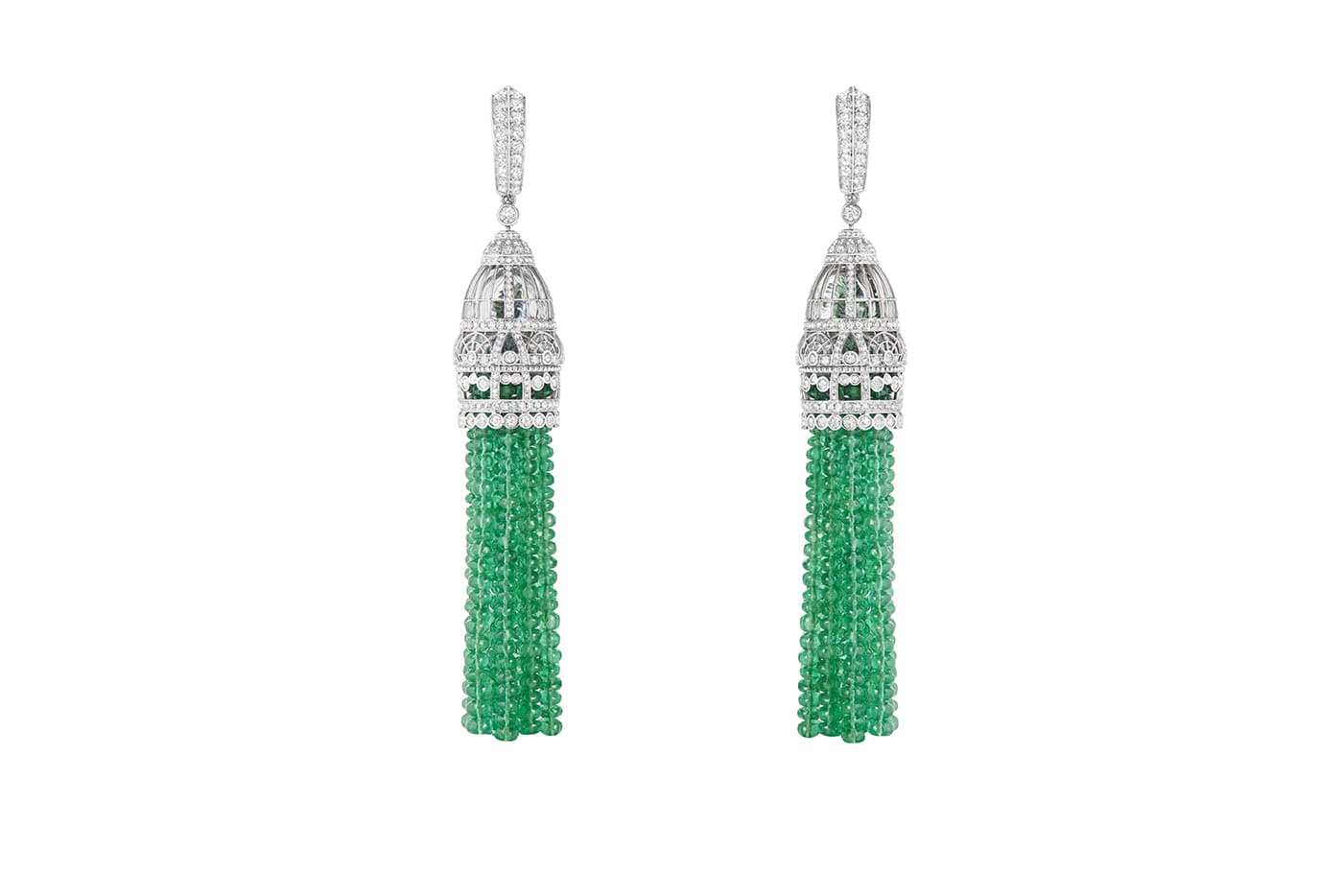 Van Cleef and Arpels’ new collection, 'Romeo and Juliet', recounts the story of literature’s most famous lovers. The luxurious 'Giardino' necklace - comprised of two strands of sapphire beads, refers to the jewellery worn by the nobility during the Renaissance. The sautoir is decorated with two pendants, one of which features a carved Colombian hexagonal cut emerald weighing 81.07 carats, decorated with elaborate engravings. The second is a soft bushel of hundreds of emeralds. If the wearer wishes, the double thread can be turned into a long necklace – with one pendant worn in front and the other behind. 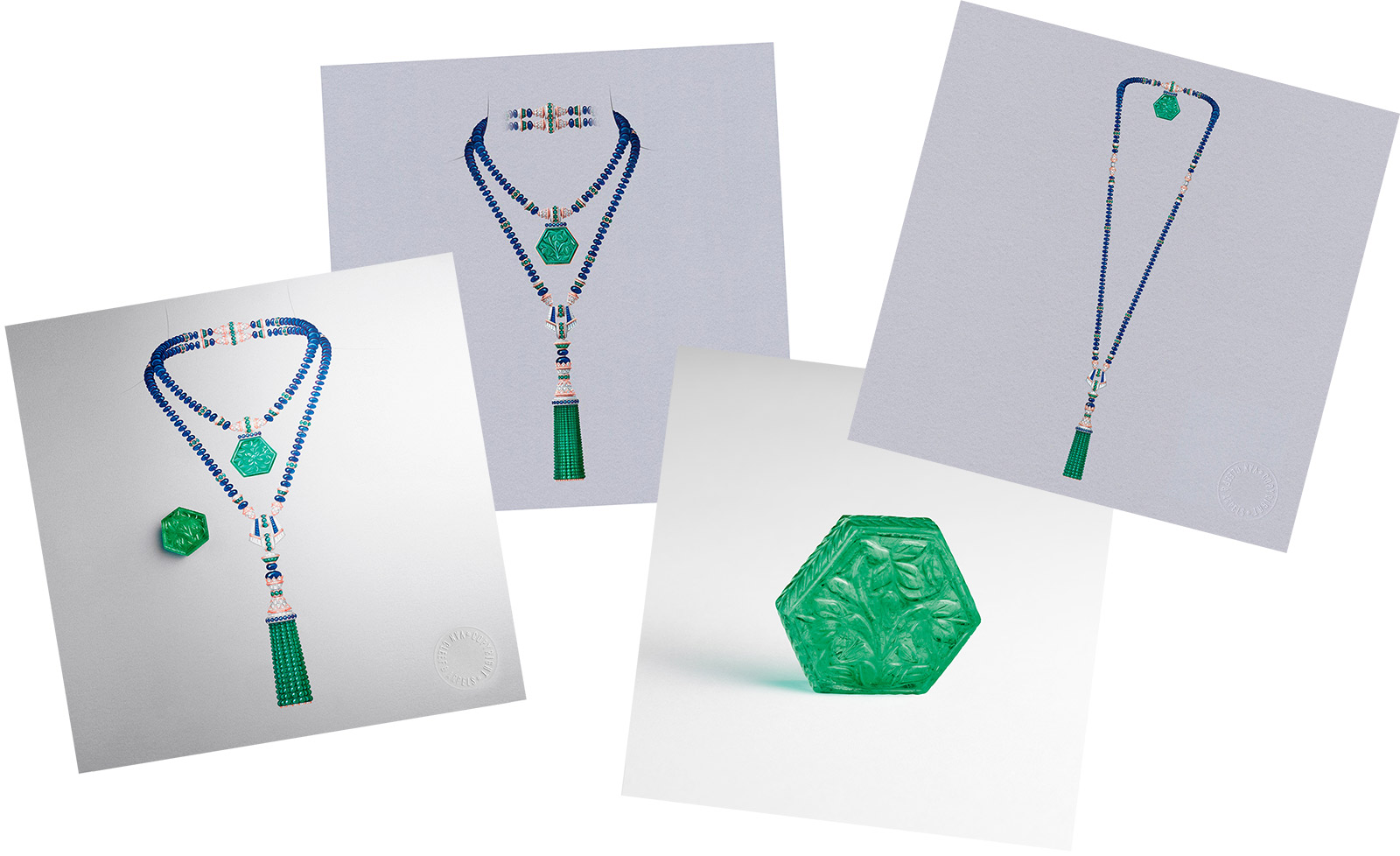 For lovers of revivalist jewellery, Piaget designers have created ‘Secret Oasis’ long necklace with a Colombian emerald of 26 carats – 688 beads of the same gem – and almost 13 carats of diamonds in a variety of different cuts. This piece is a part of the 'Golden Oasis' collection, and is inspired by the beauty of the desert and the scorching sun. Palm leaves are used to form the central decorative element, and are transformed into a brooch, either with or without a brush of emeralds, while the base of the necklace is transformed into two separate bracelets. 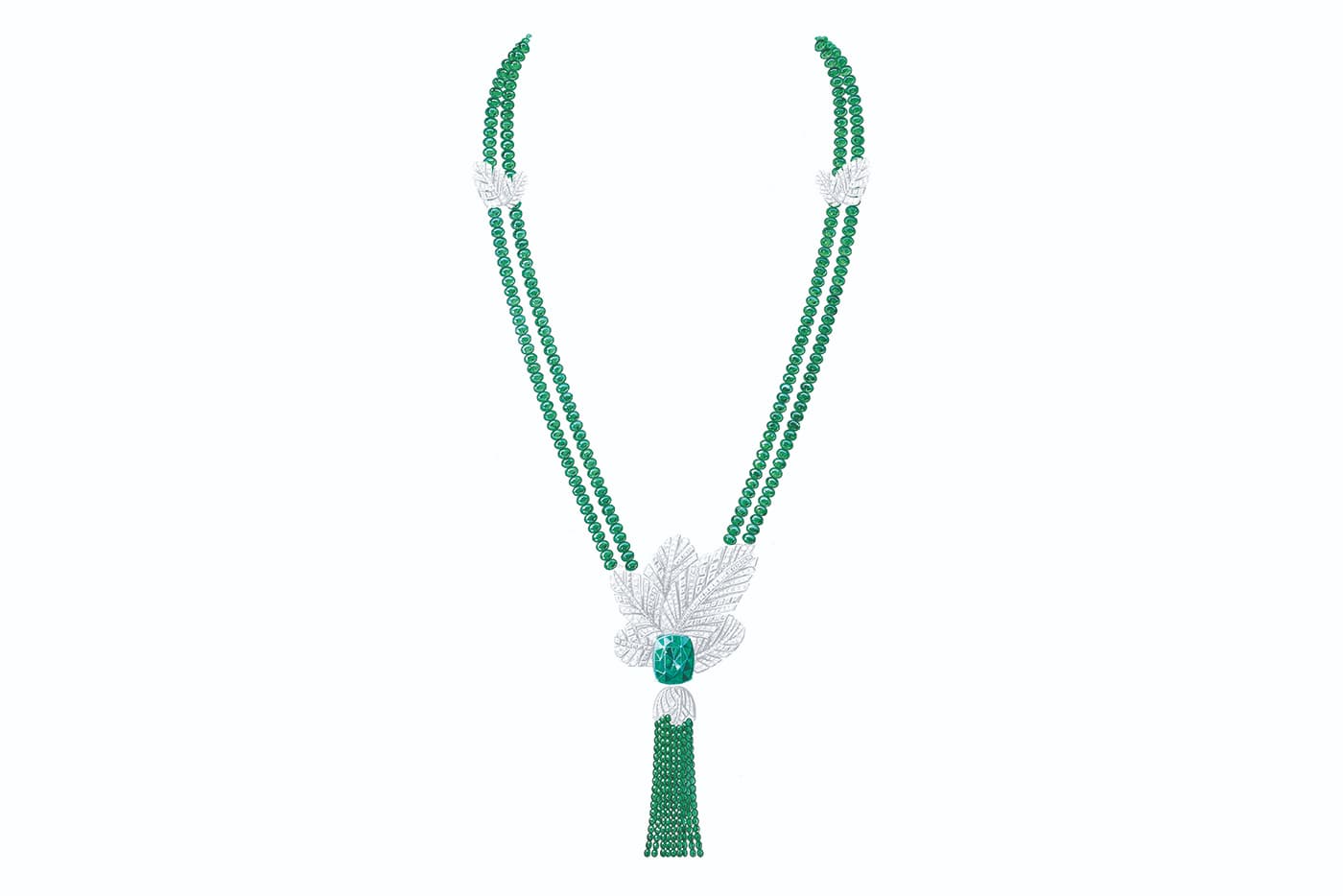 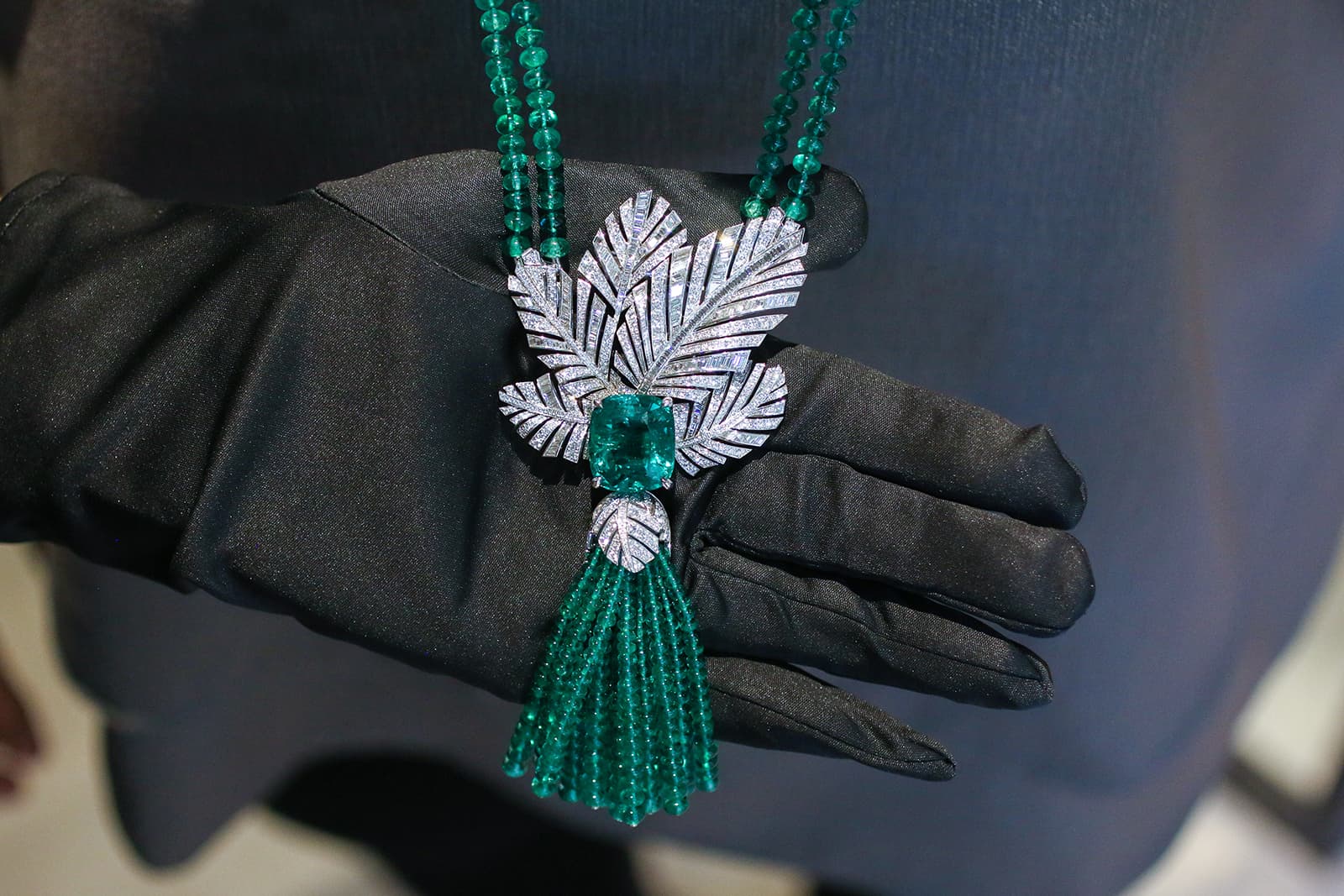 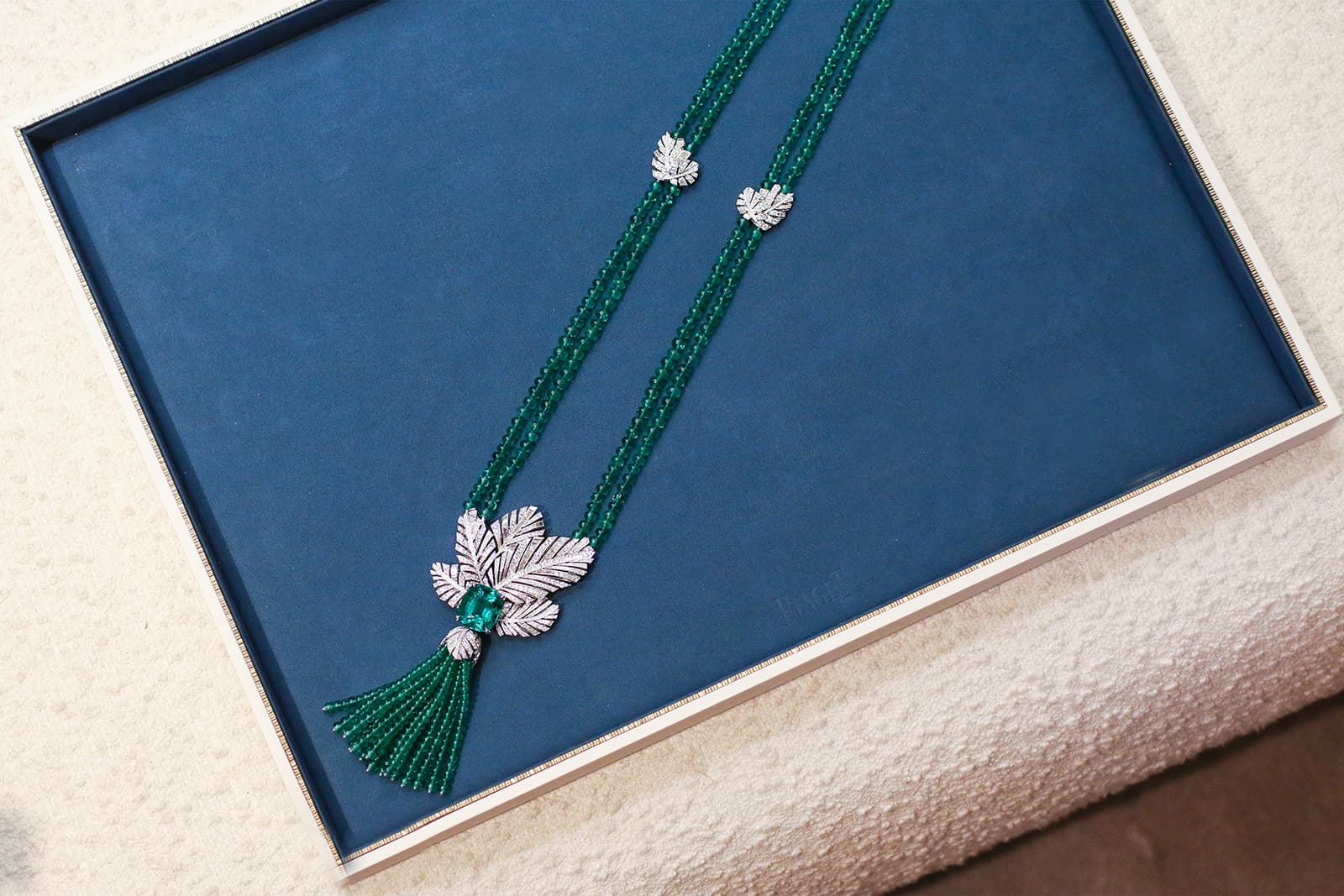 An alternative and particularly interesting interpretation of the ubiquitous tassel theme can be seen in the Japanese brand Tasaki’s new collection of haute joaillerie: ‘Ocean Frontier’. The 'Waterfall' necklace and earrings are adorned with a single pearl and a cascade of sparkling diamonds, while the ring from this set is decorated with elegant gold chains. Unlike the monochrome palette of Tasaki’s collection, the Italian brand Gucci presented a brightly coloured necklace with citrines and tourmalines from the 'Hortus Deliciarum' debut fine jewellery line. The whole collection is dedicated to the iconic symbols of the Gucci fashion house, including a lion that holds a tassel in its mouth. 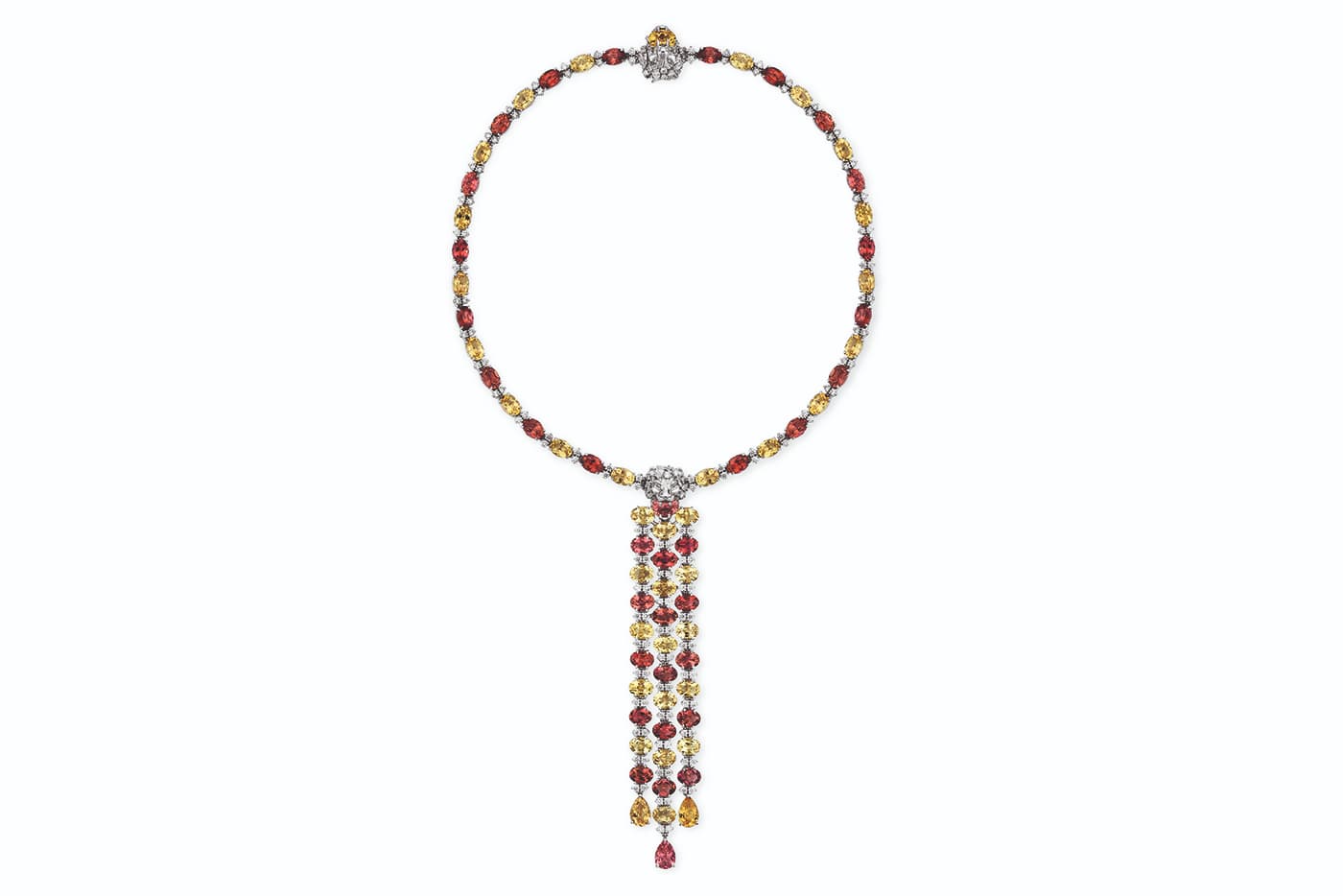 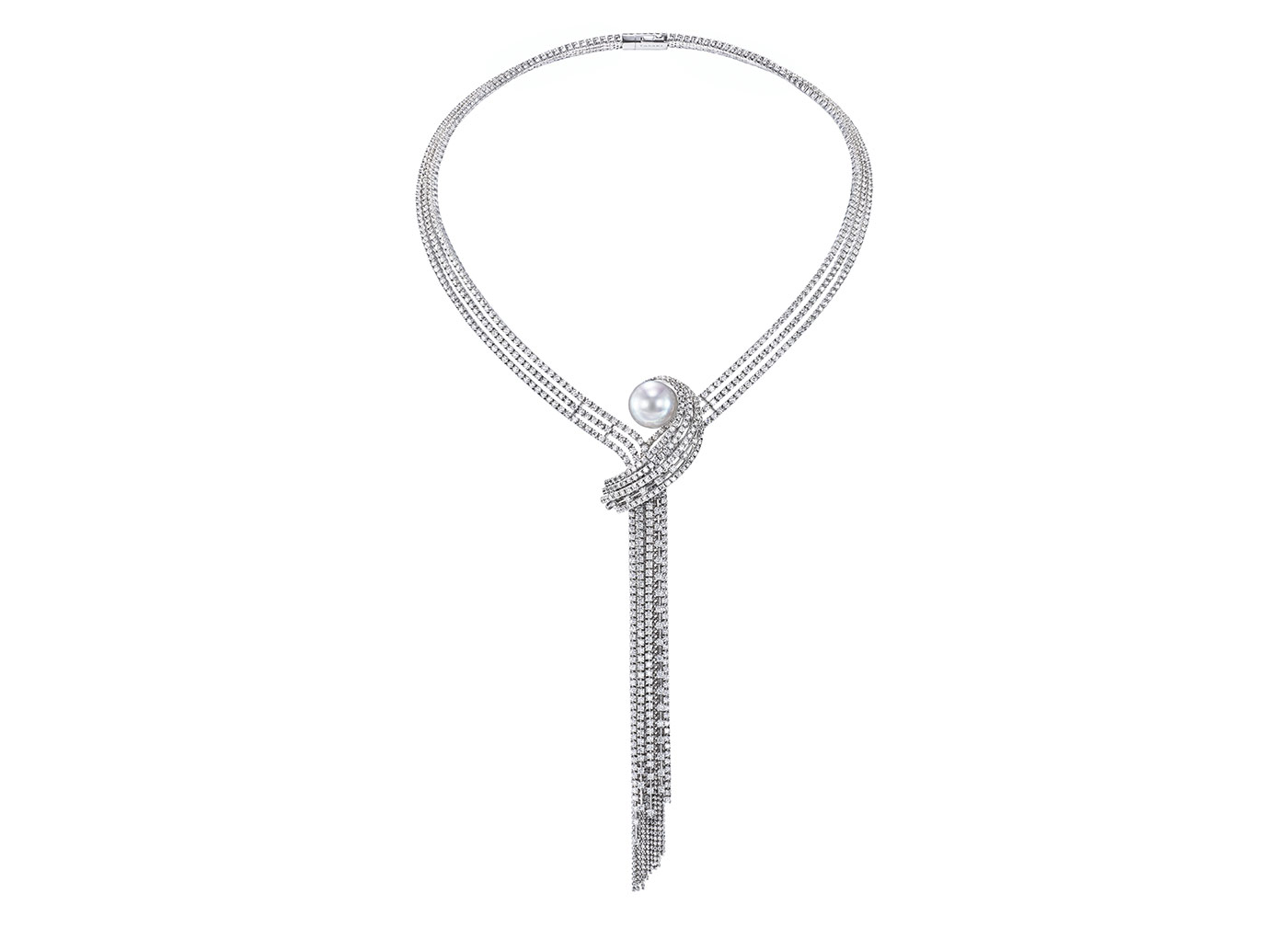 Now imagine before you, readers, a silk tassel which has been unfolded in a long single line. The fringed thread you hold in your hands is that which forms the basis for the design of the stunning Cartier 'Alya' necklace with 107.69 carats of Mozambican rubies, as well as tourmalines, amazonites, onyx and diamonds. Similarly, this fringed motif is translated in De Beers 'Chapman's Zebra' necklace with diamonds and black pearl, as well as the Boucheron 'Grosgrain' malachite, onyx and diamonds piece, and the Chanel’s 'Ble Gabrielle' necklace created with textured white and yellow gold with diamonds. The approach of the first three brands makes use of a fringe with a repeating pattern, which bends around the entire circumference of the neck. In the latter brand, the fringe is used to embolden the design’s frontal foliage. 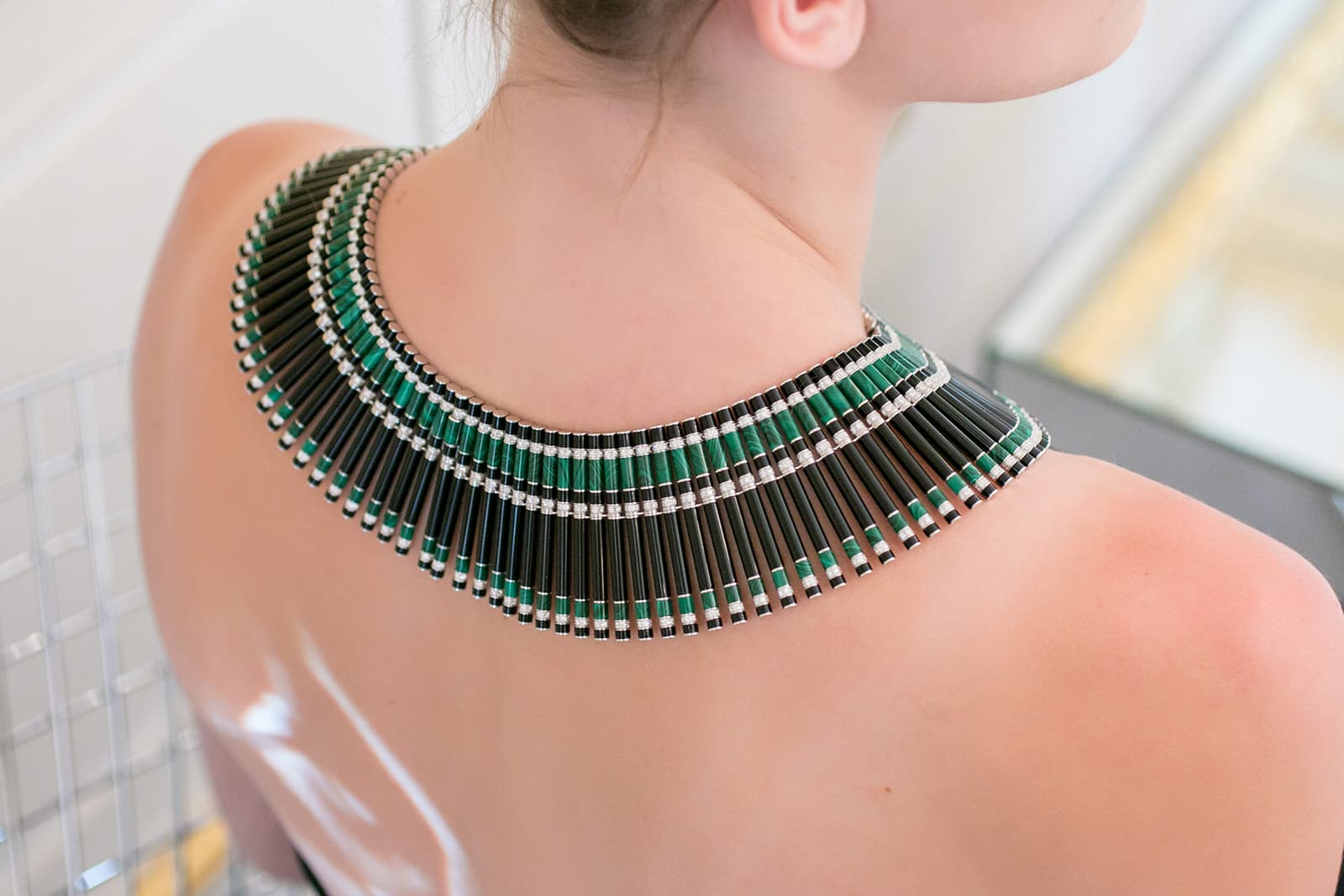 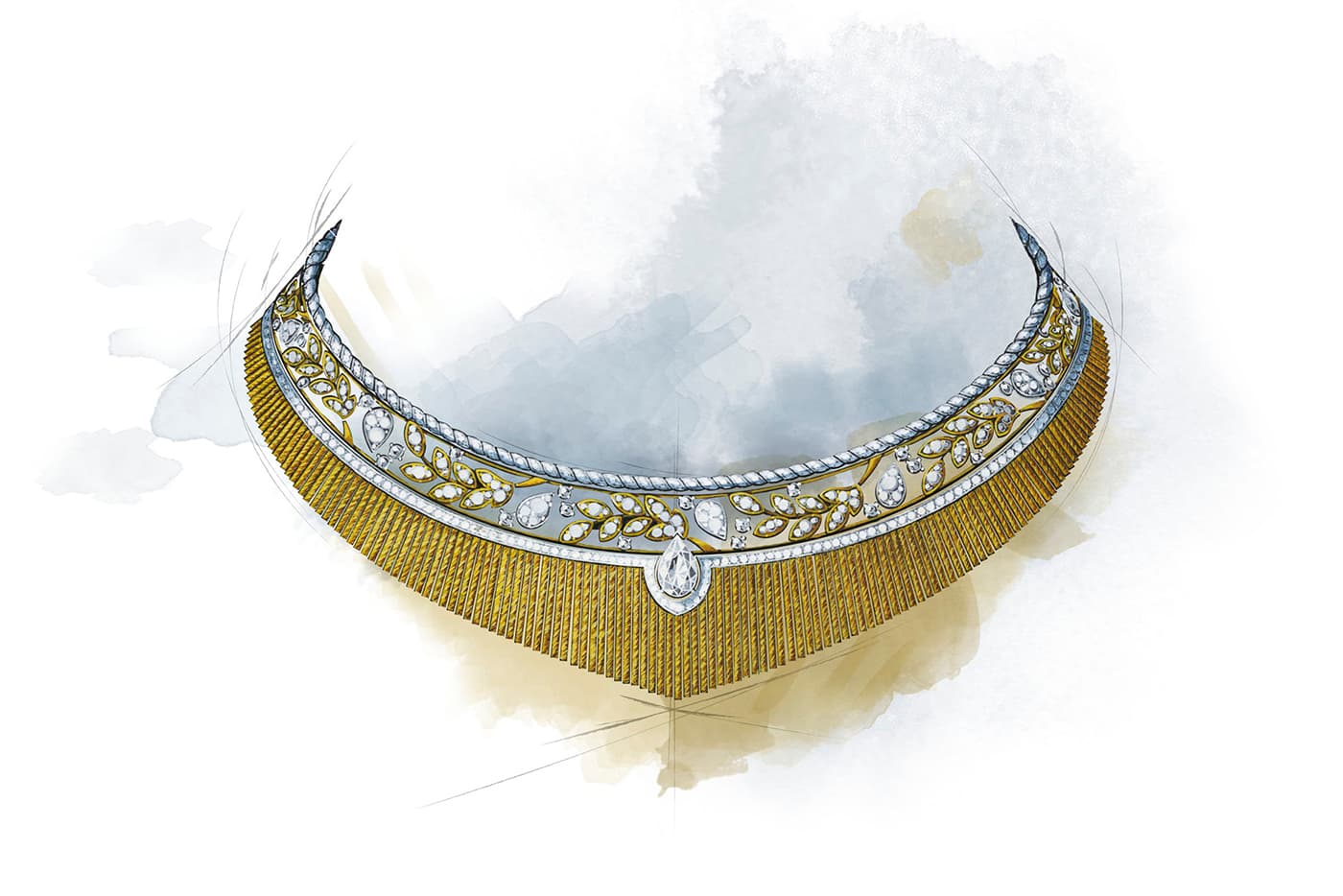 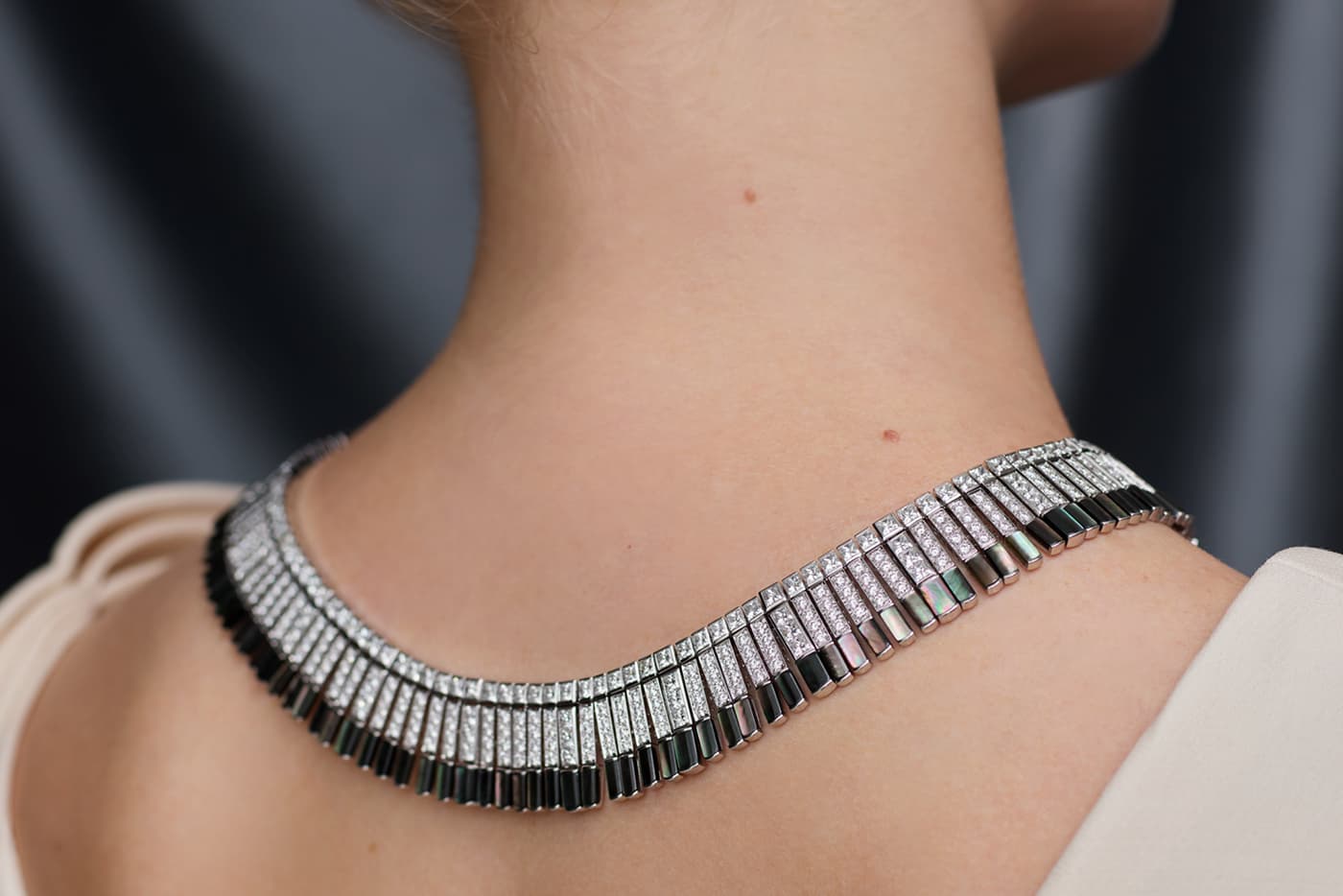 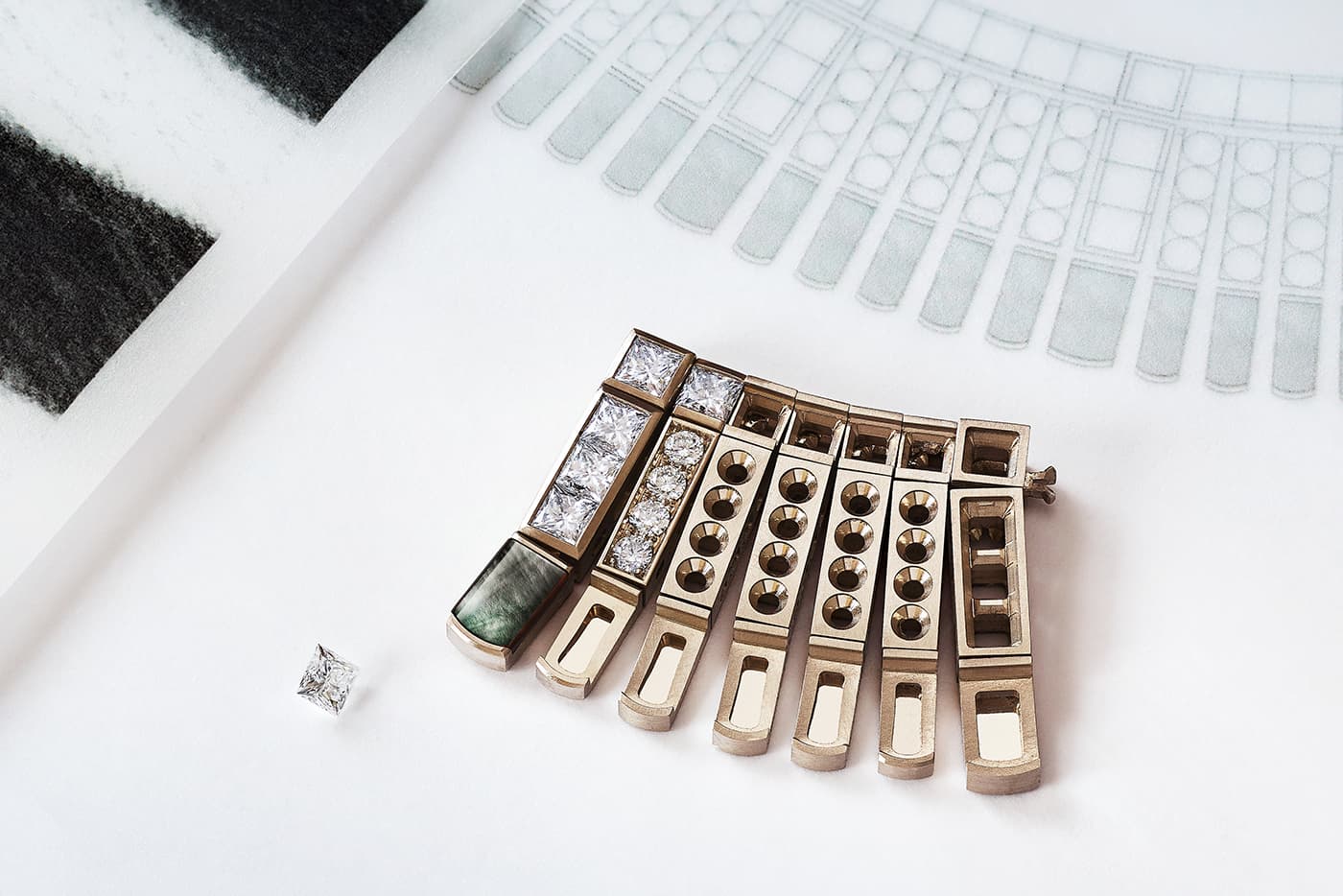 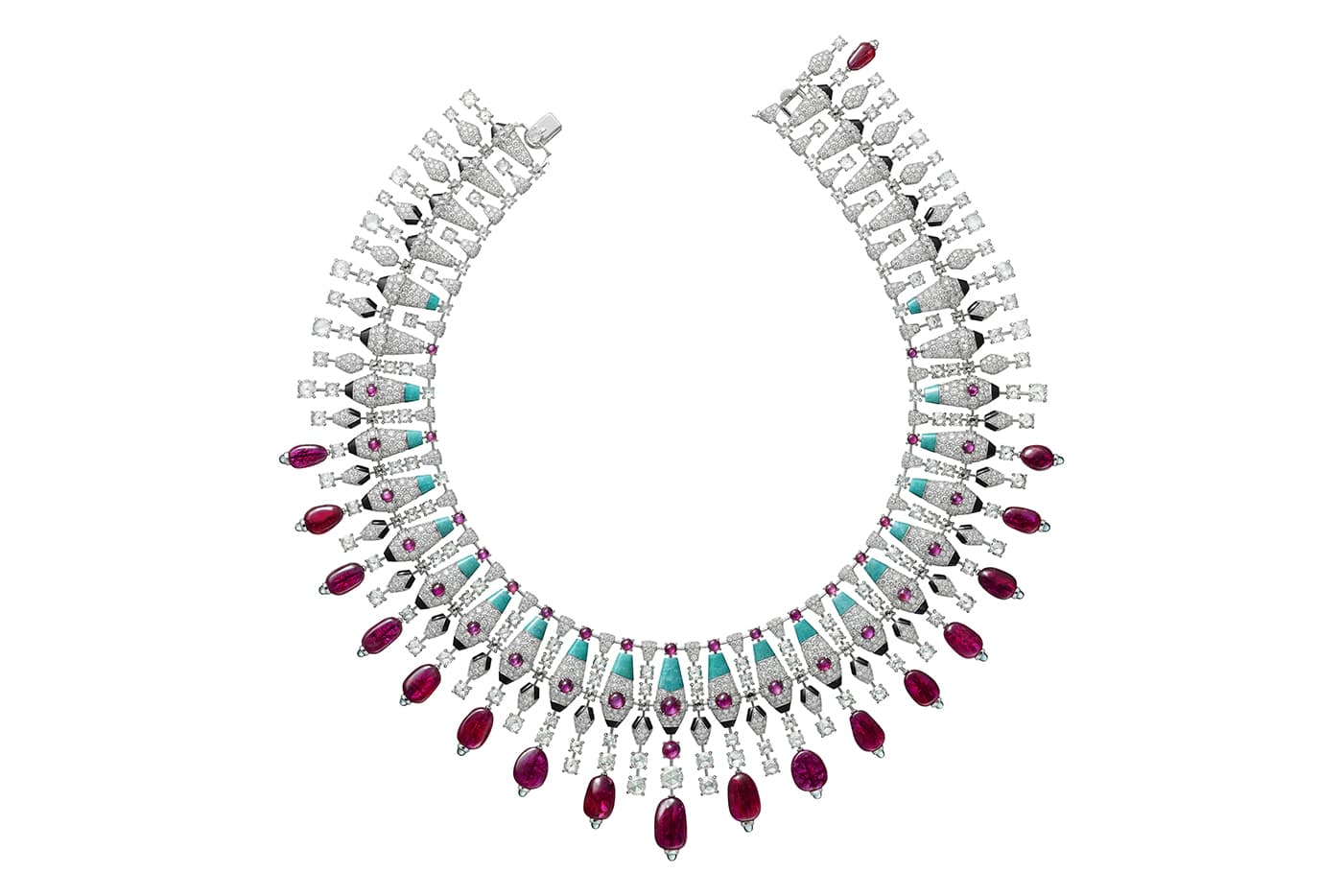 The incorporation of moving components within jewellery design, as described in this article, add an otherwise absent dynamic to high art jewellery which, in my opinion, makes it more playful. Necklaces, earrings, rings and bracelets become suitable not only for special celebrations, but for a much broader range of occasions.