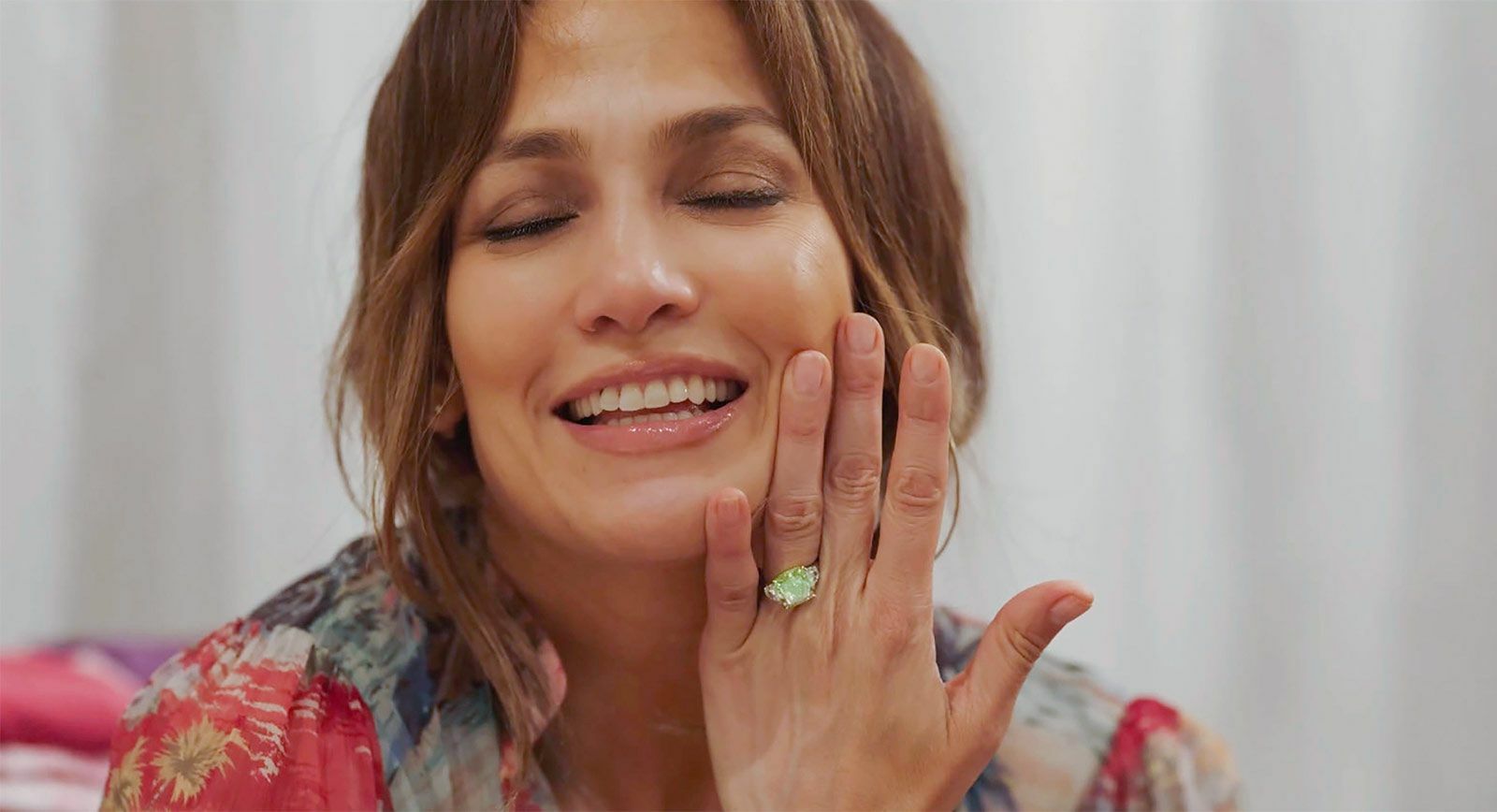 As lovers of jewellery, it is inconceivable to us that people might not know that so-called ‘fancy’ coloured diamonds exist. There’s a strong contingent of people out there who think diamonds are only ever colourless… but what a vibrant rainbow of hues they are missing out on! Sometimes it takes mega-celebrities to bring this kind of information that’s known ubiquitously by those in the know, but less so elsewhere, to the forefront. This isn’t the first time that singer, actress and television personality has been responsible for invigorating demand for a certain fancy colour diamond – and with the same man’s involvement no less! 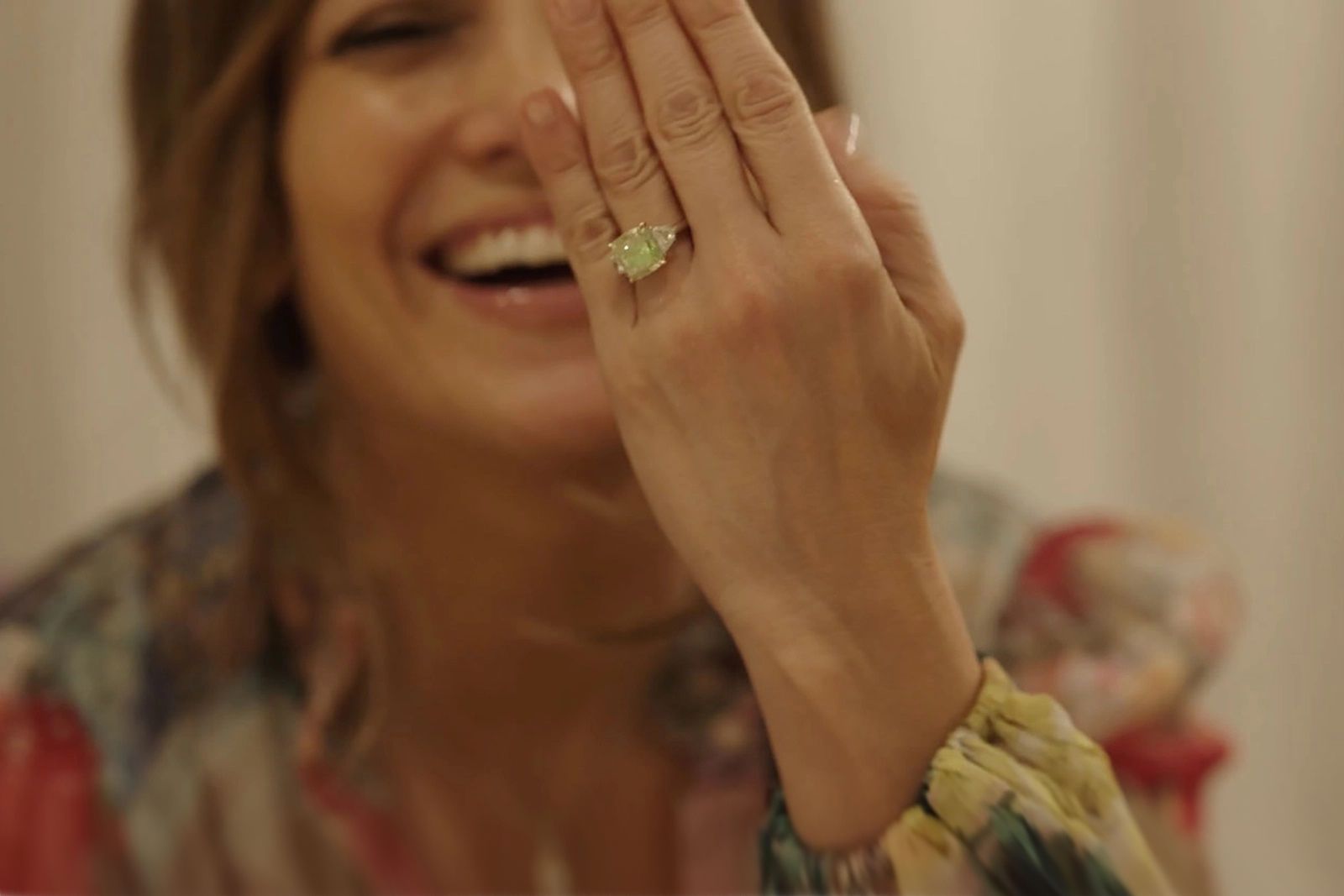 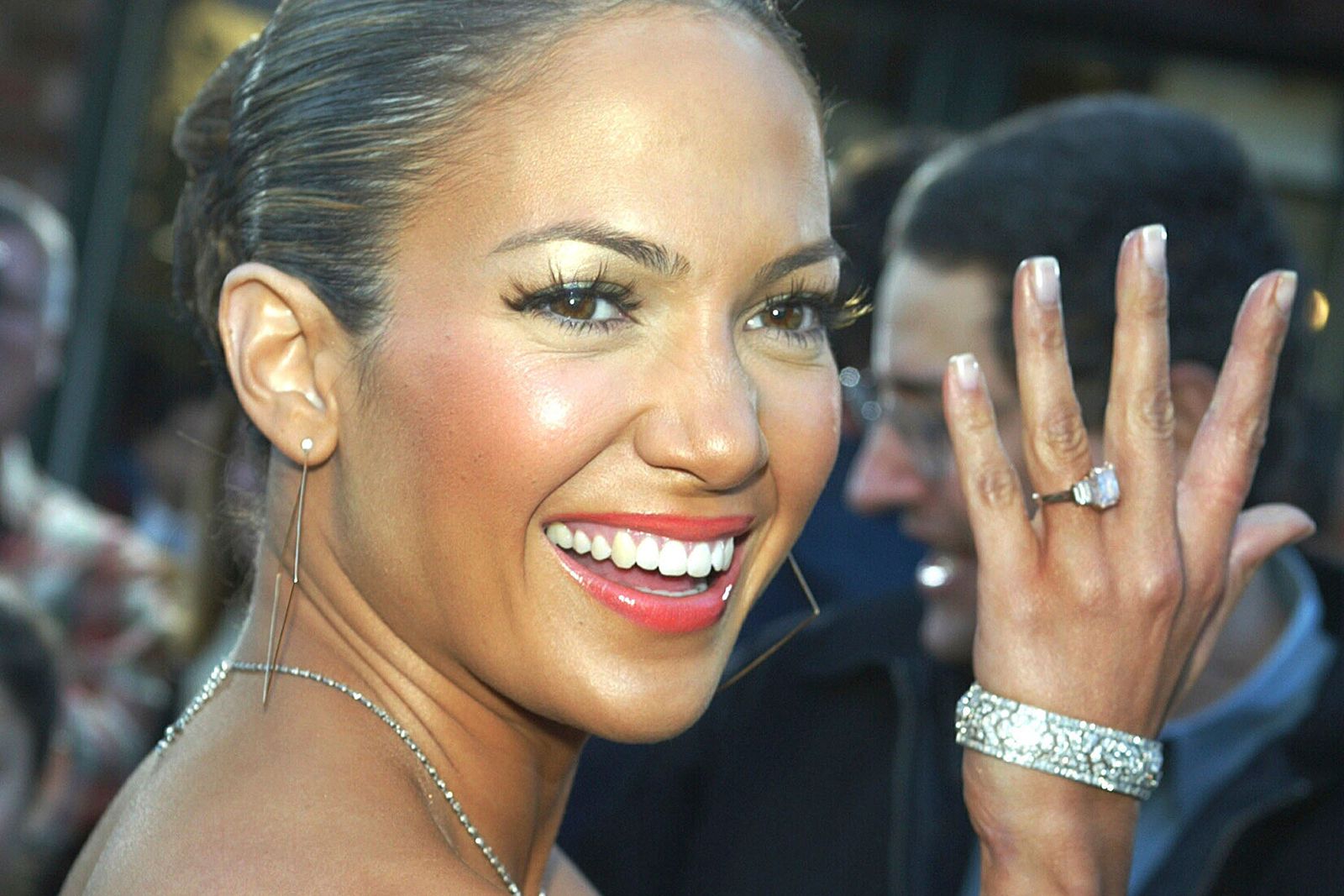 In 2002, Ben Affleck proposed to Jennifer Lopez with a reported 6.1-carat pink diamond ring from Harry Winston, making it one of the most significant jewellery icons of the early noughties. Now, for their second engagement, Affleck’s gone even rarer into the diamond rainbow with a natural green diamond, sourced by Ilan Portugali, Tamara Rahaminov and Nicol Goldfiner of Rahaminov Diamonds. The cushion-cut diamond is 8.5 carats and is assured to be of natural origin, which adds to its rarity and prestige among collections. 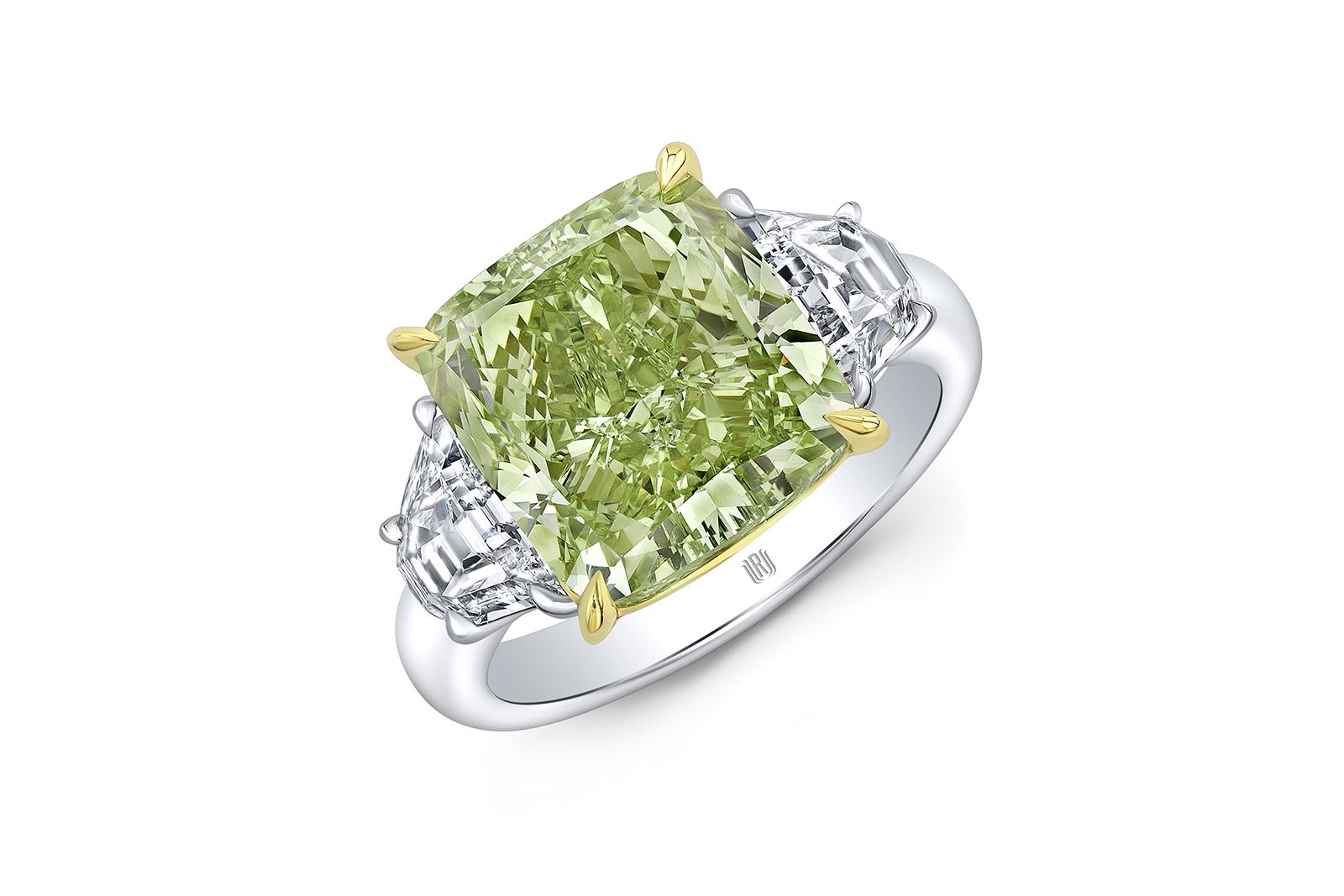 First, green diamonds are extremely rare! According to the experts at the Gemological Institute of America (GIA), diamonds with a “pure” green, blue or red colour comprised less than 0.07% of all the diamonds it received worldwide for grading from 2008 to 2018. When these particular formations of carbon are found in South America or Africa, especially in large sizes, there is guaranteed to be a ripple of excitement in the diamond world. 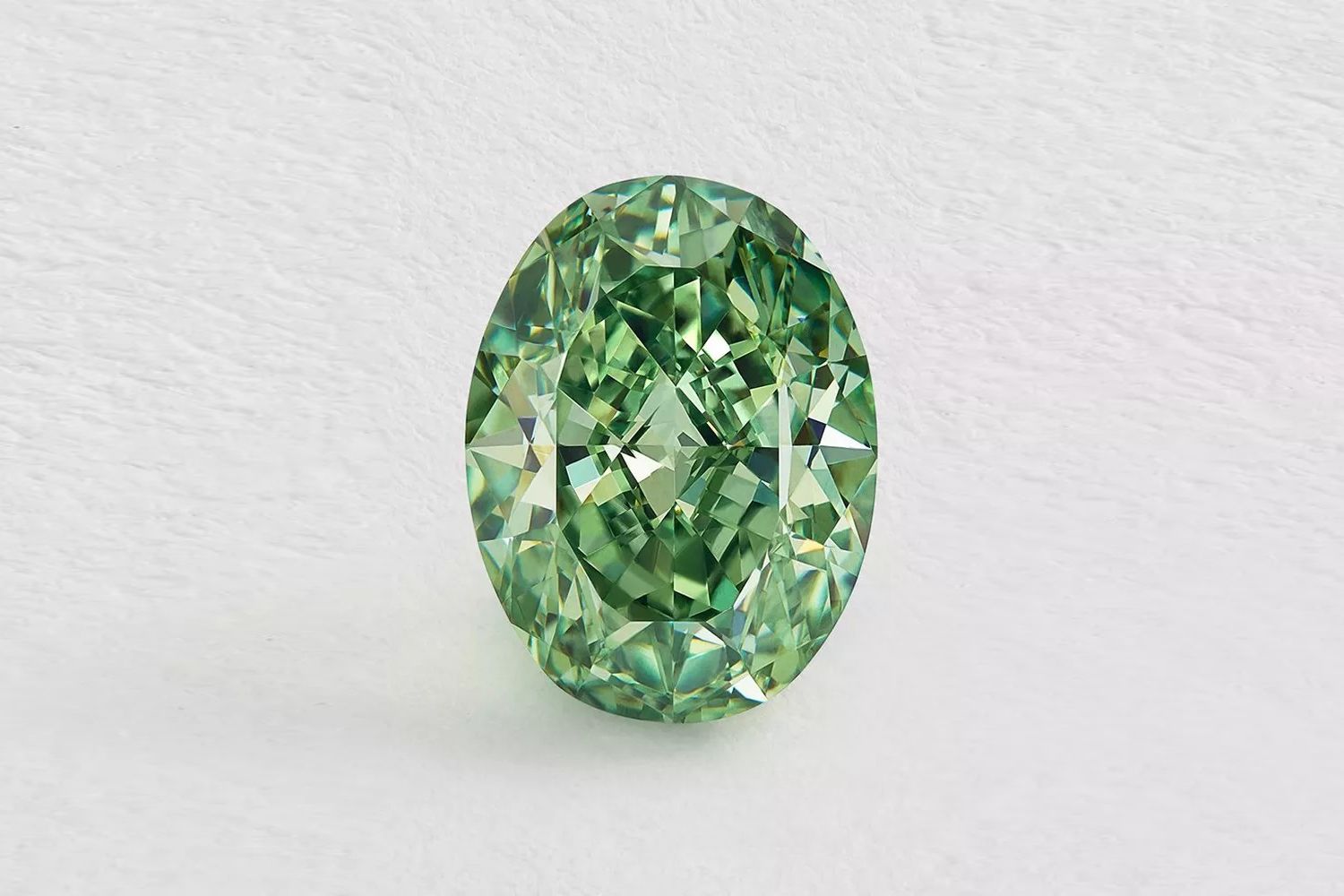 Green diamonds get their colour due to exposure to natural radiation within the earth after they’ve formed, which causes them to reflect green light. Most often, this colour is like a coating or covering that the diamond ‘wears’ on its surface, which means the green hue doesn’t permeate all the way through a stone. Cutting a green diamond means maintaining the integrity of this colour while maintaining its carat weight… a sensational gem might take a full year to plan, cut and polish. This version of the green story focuses on “simple structural defects produced by radiation exposure,” according to GIA, but there are “more complex defects involving nitrogen, hydrogen or nickel impurities” too. It is the complexity of green diamonds that brings us to the next important topic: how can we be sure the colour is natural? 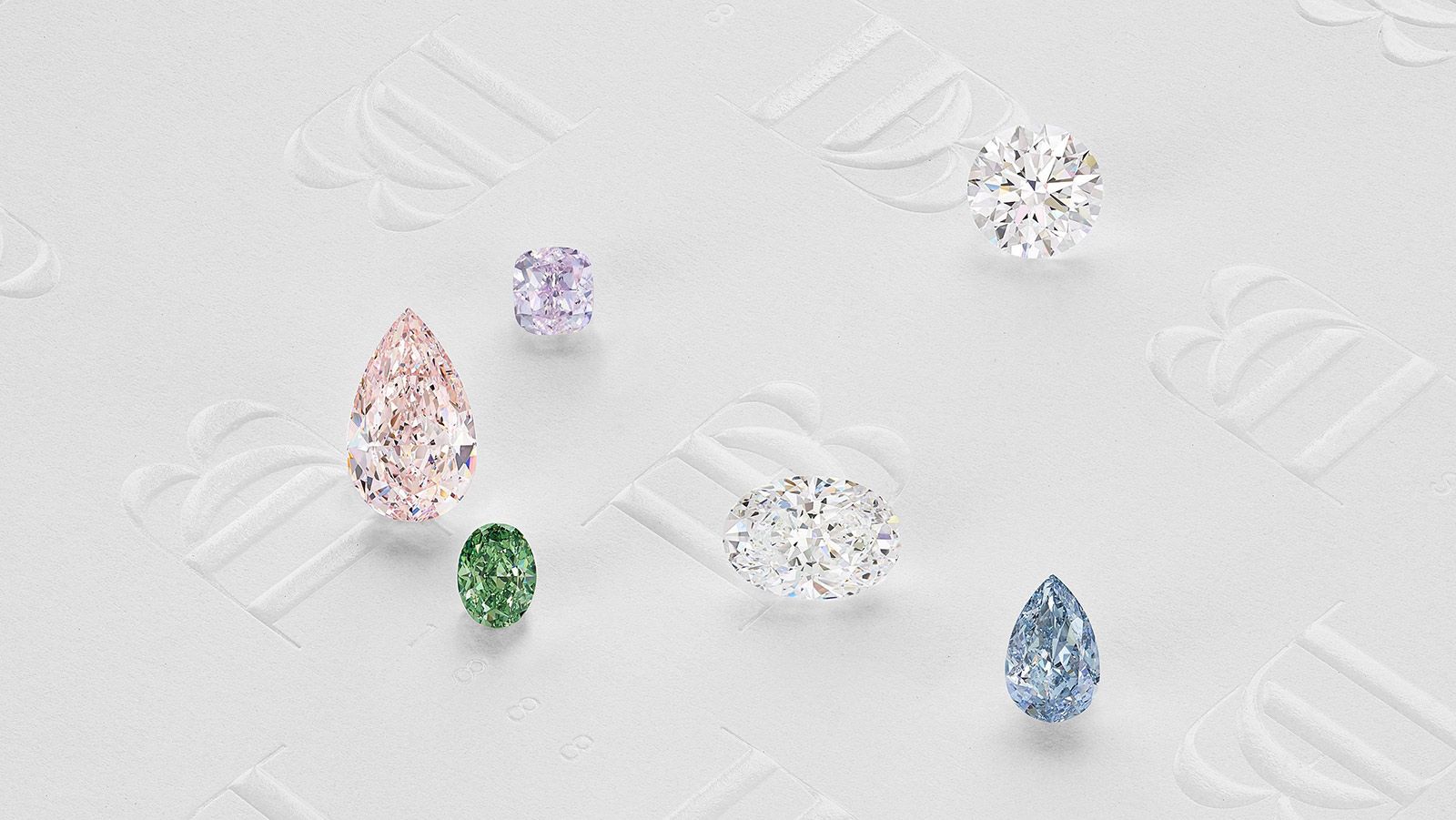 Dig a little bit deeper and you will discover a sense of nervousness around green diamonds, even among diamond experts. Why? Because it is notoriously difficult to determine whether the green hue is naturally occurring or has been artificially produced through irradiation treatment. The latter is common in all kinds of diamonds for enhancing colour and has been around since the 1940s. However, when it comes to value, it’s whether a colour is natural or man-made that really matters. Even gem testing laboratories have described telling them apart as an “impossible task”. 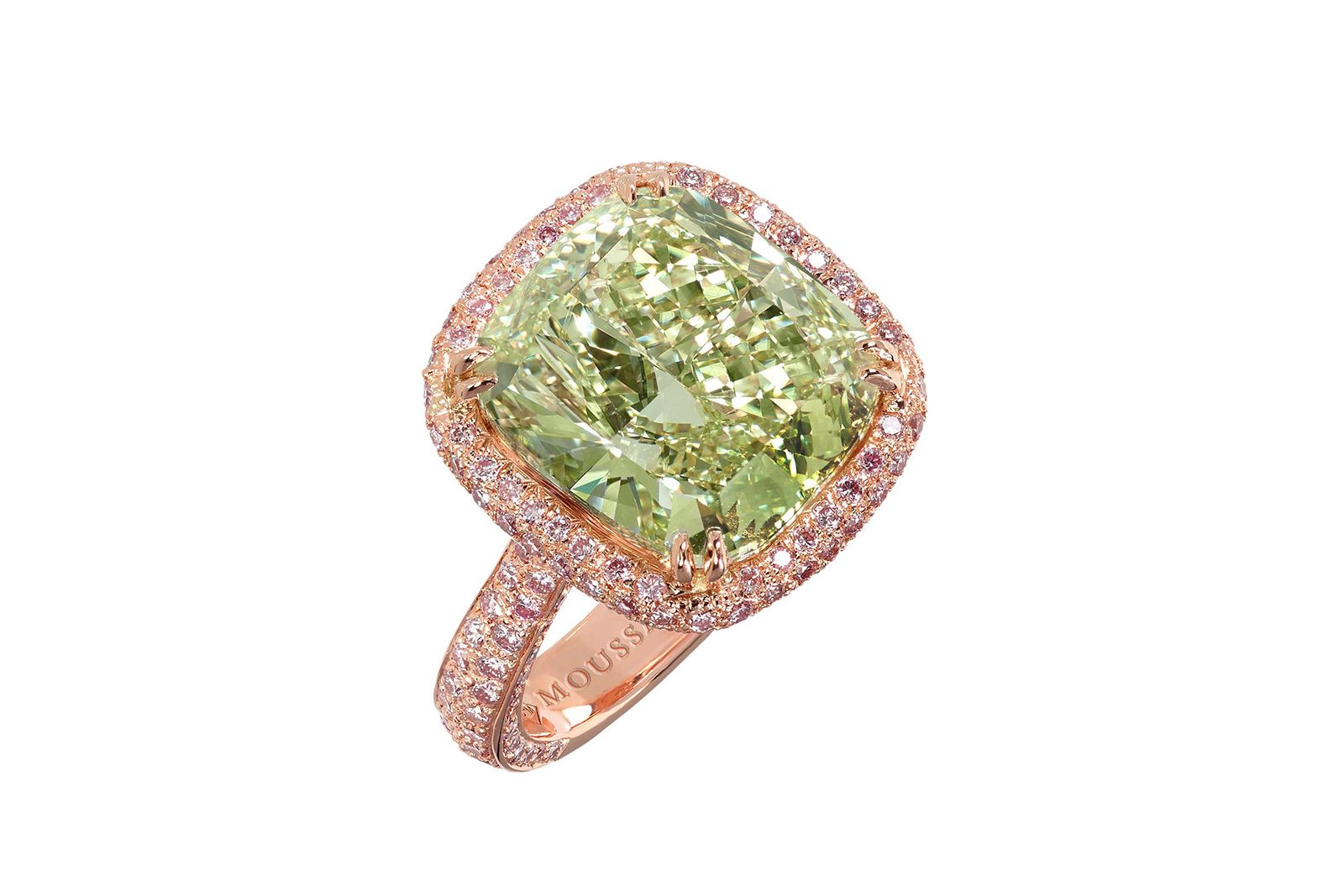 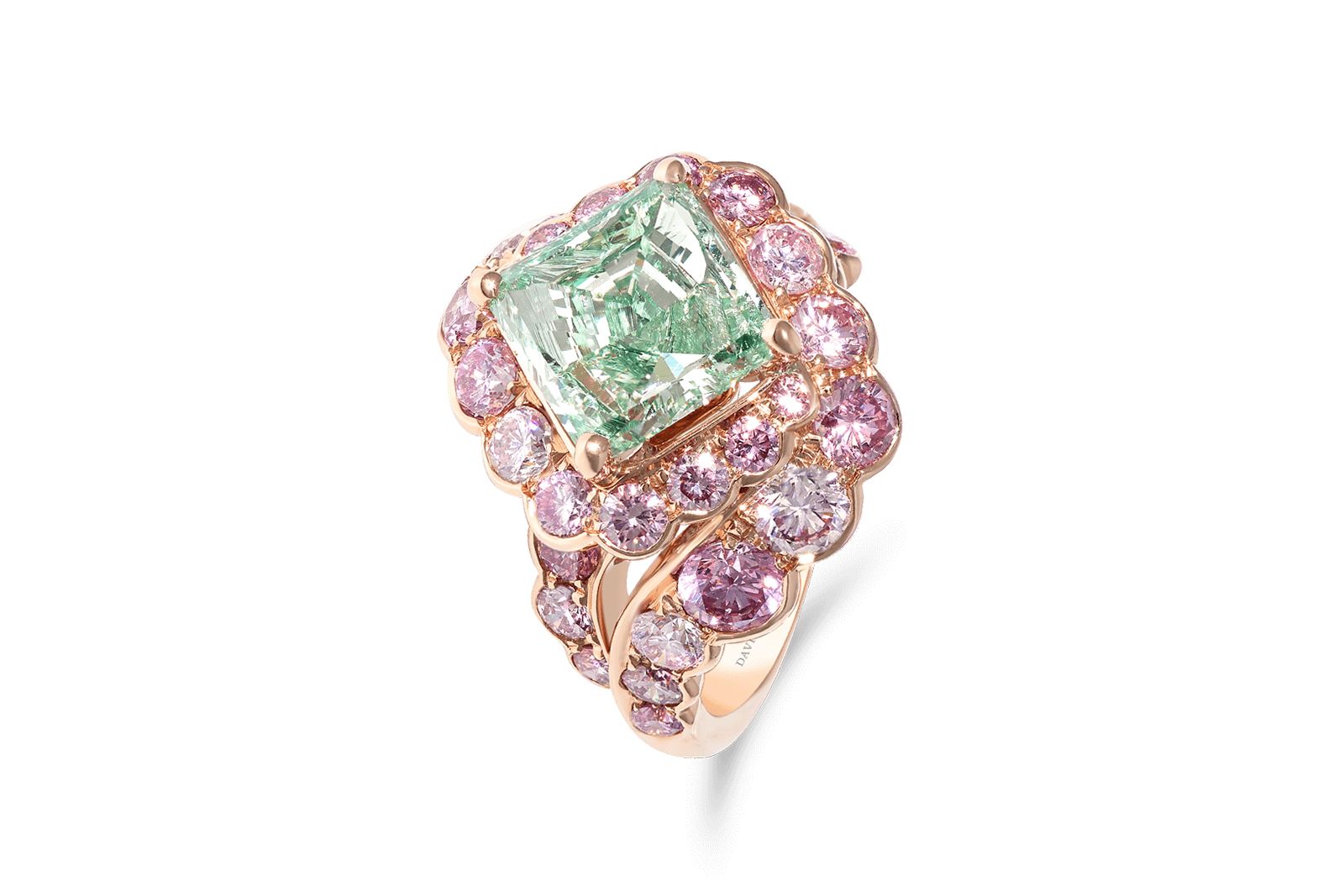 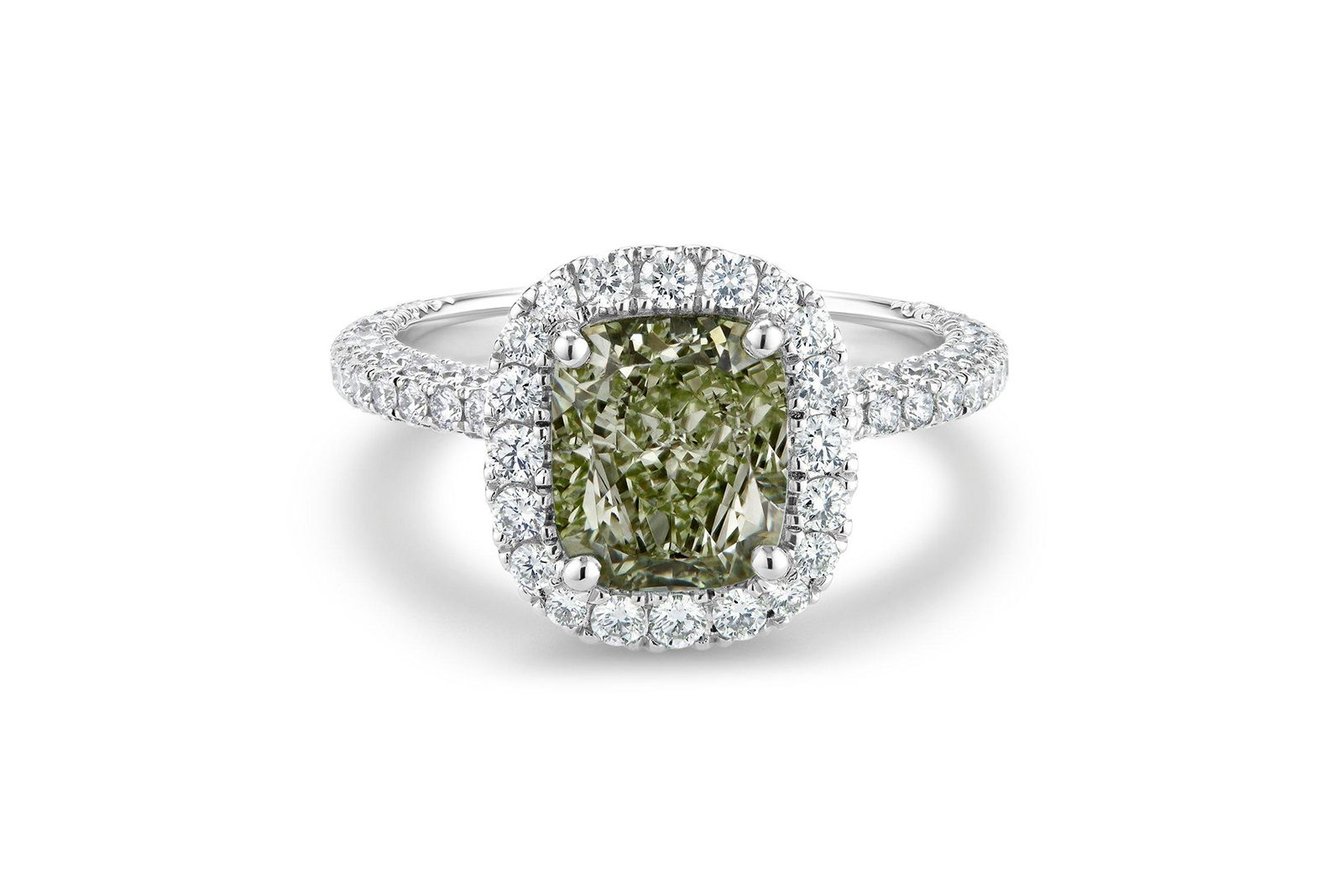 An article in Gems&Jewellery magazine from the Gemmological Association of Great Britain (Gem-A) in 2020 notes that “the origin-of-colour determination of yellow-green to green to greenish-blue diamonds with radiation-related colour is one of the biggest challenges in diamond testing”. Vast research has been done on this topic by GGTL Laboratories Liechtenstein and there are now methods in place for accurately identifying the origin of irradiation-related colour in diamonds (deciding whether they are ‘treated’ or ‘untreated’). But the ground is still shaky for yellow-green to green to greenish-blue Type IIa diamonds, largely because there are so few examples for experts to study. One such stone that many wish to get their hands on is the Dresden Green, which I will explain more about below. 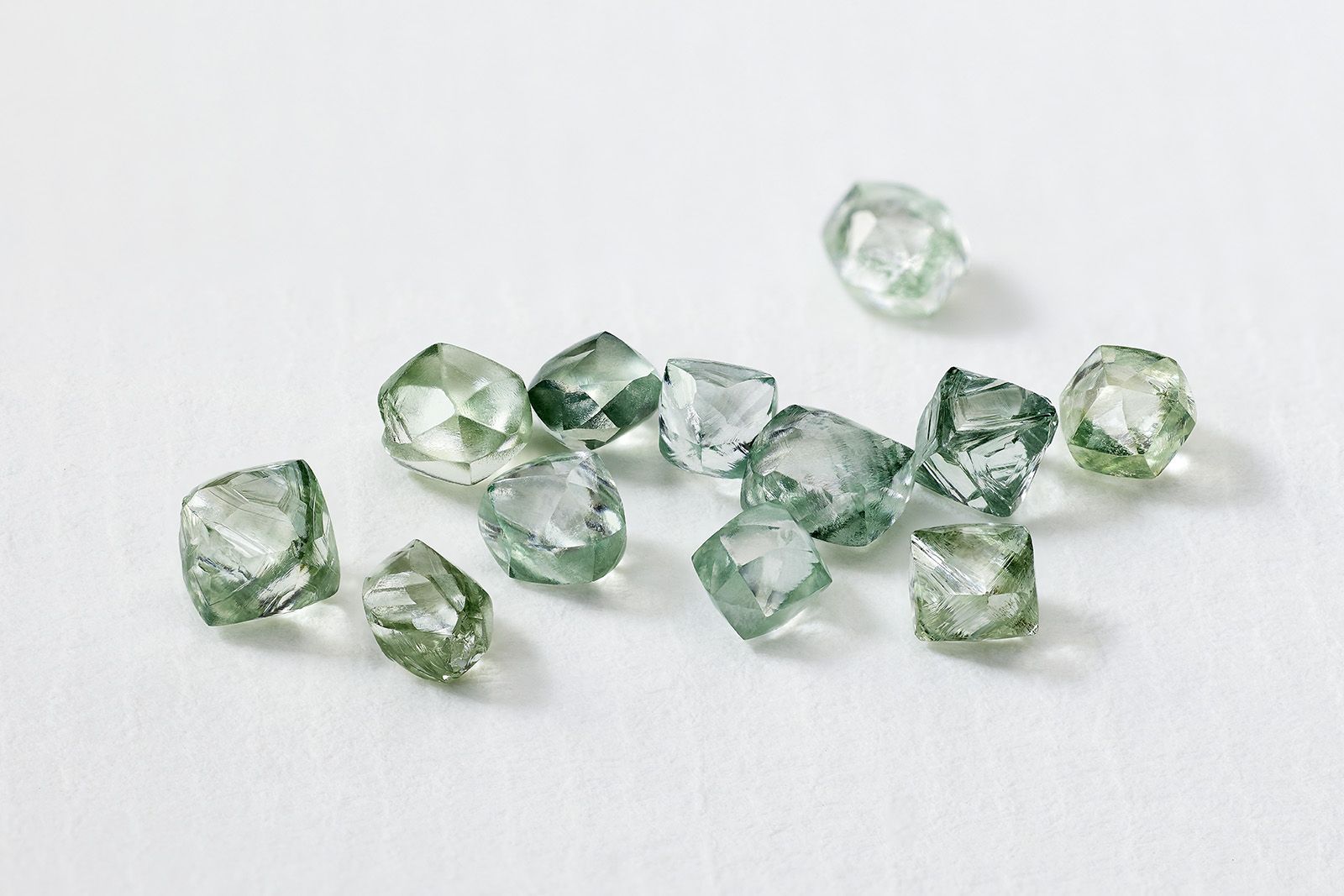 The Dresden Green Diamond is a 41-carat natural green stone, which probably originated in the Kollur mine in the state of Andhra Pradesh, India, some time prior to 1722. It’s an especially rare Type IIa stone, cut into a pear shape, and is now housed at the Green Vault Museum in Dresden, Germany. In 1988, a team of gemmologists assessed the diamond and declared it to be VS1 clarity with uniform fancy green colour running throughout. Today, it’s set in a hat ornament mount from the late 18th century. Next, there’s the most expensive green diamond ever sold: the Aurora Green. This 5.03 carat diamond headlined a Christie’s Hong Kong sale in May 2016, selling for an astonishing HK $16.8 million. Just two years earlier, the 5.5 carat Ocean Dream blue-green triangular-cut diamond was sold at Christie’s Geneva for CHF 7,781,000. 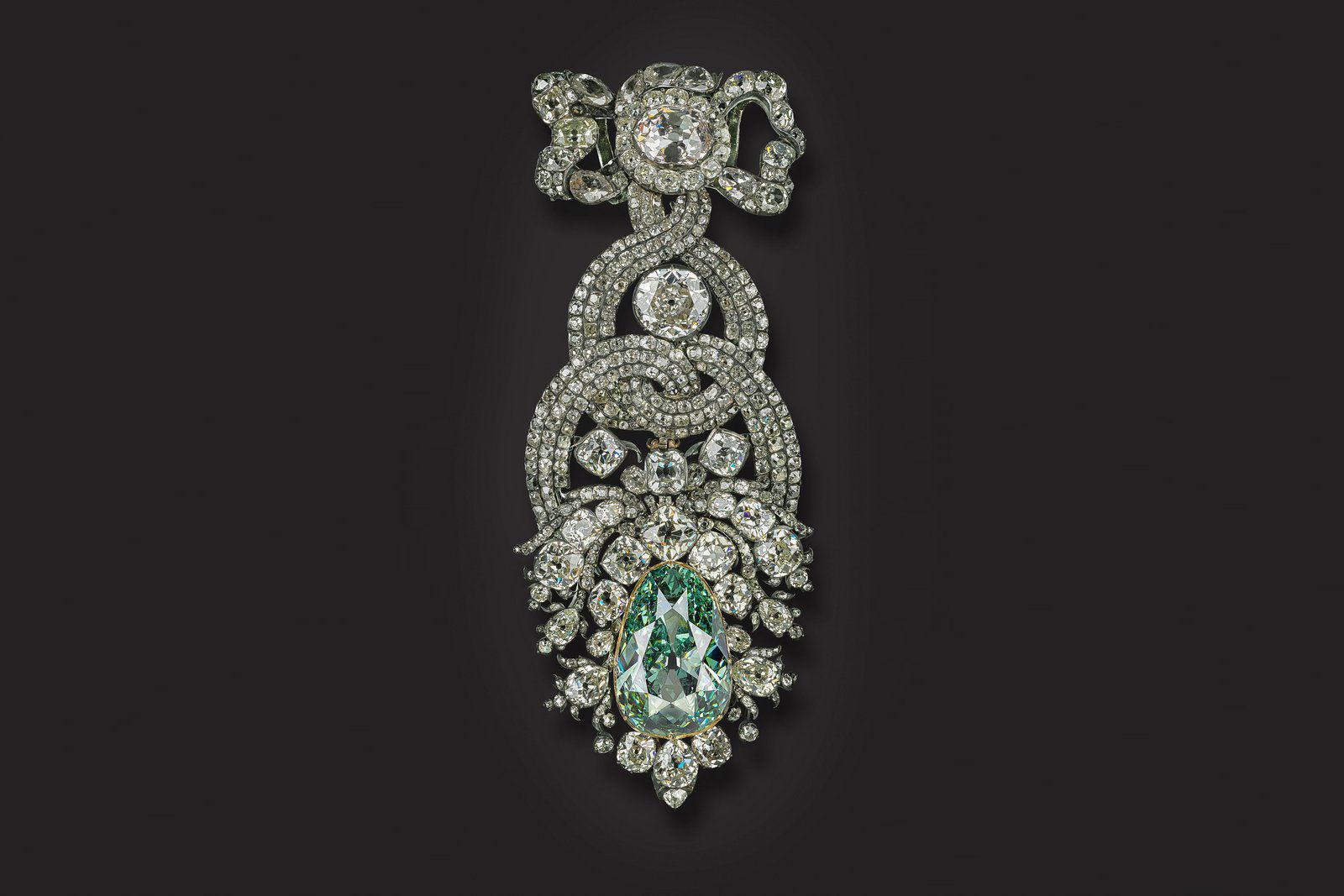 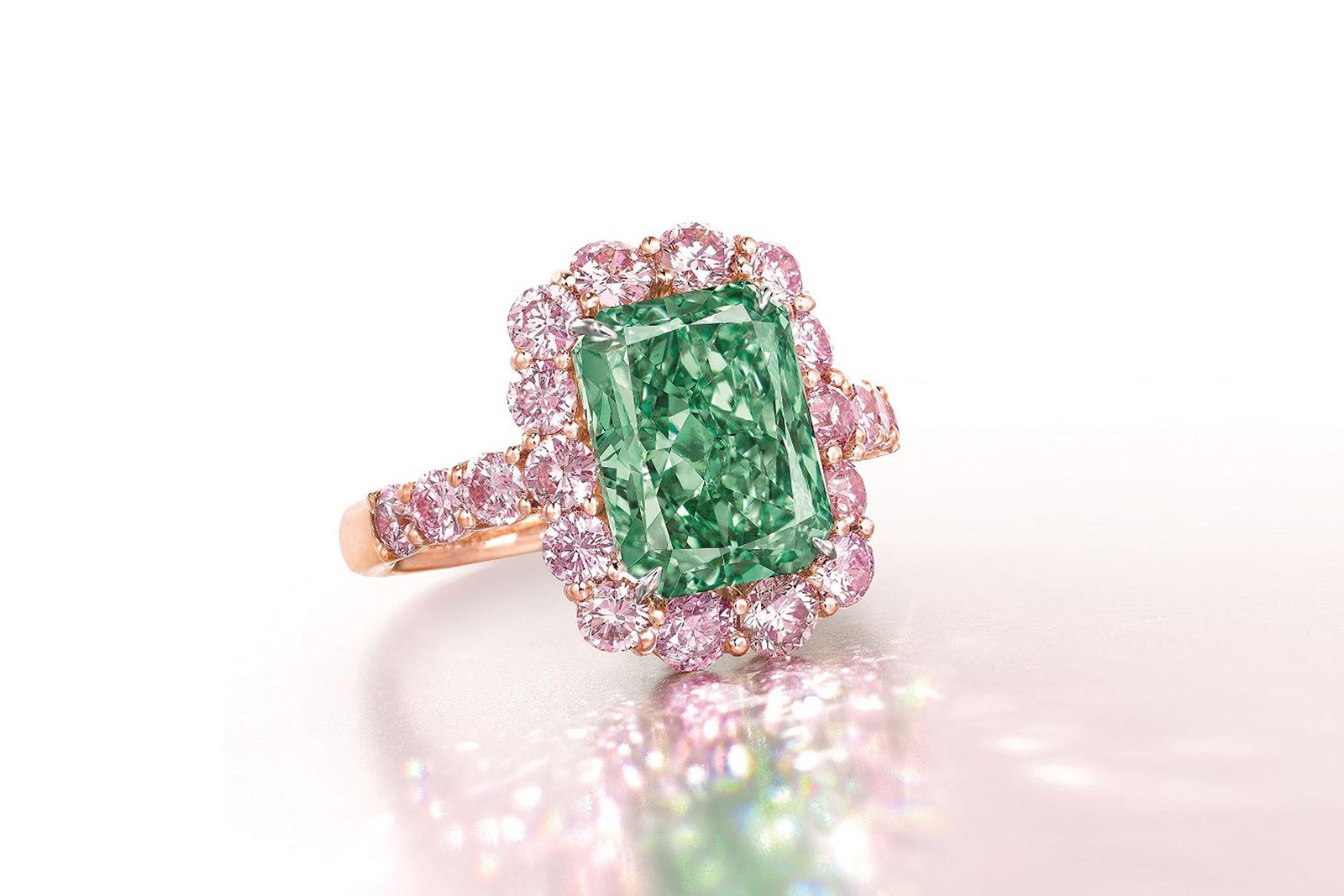 Some commentators on Jennifer Lopez’s green diamond engagement ring have suggested the stone may have an almost neon appearance due to strong green fluorescence. This is the ‘glow’ that can be seen when an object emits visible light, and around 25-35% of diamonds are known to do this when exposed to ultraviolet rays from the sun. Most commonly they emit blue light, but in rarer cases, this can be a yellow or orange light. Jennifer Lopez’s diamond ring certainly seems ‘bright’ so perhaps it is emitting yellow fluorescence when she steps out in the sunshine… this only adds to its rarity! According to the GIA: “GIA considers diamond fluorescence an identifying characteristic. It is not a grading factor like the GIA 4Cs (colour, clarity, cut, and carat weight). GIA Diamond Grading Reports and Diamond Dossiers describe a diamond’s fluorescence by its intensity (None, Faint, Medium, Strong and Very Strong) when compared to master stones used in the lab. If the fluorescence is Medium, Strong, or Very Strong, the colour of the fluorescence will be noted.” 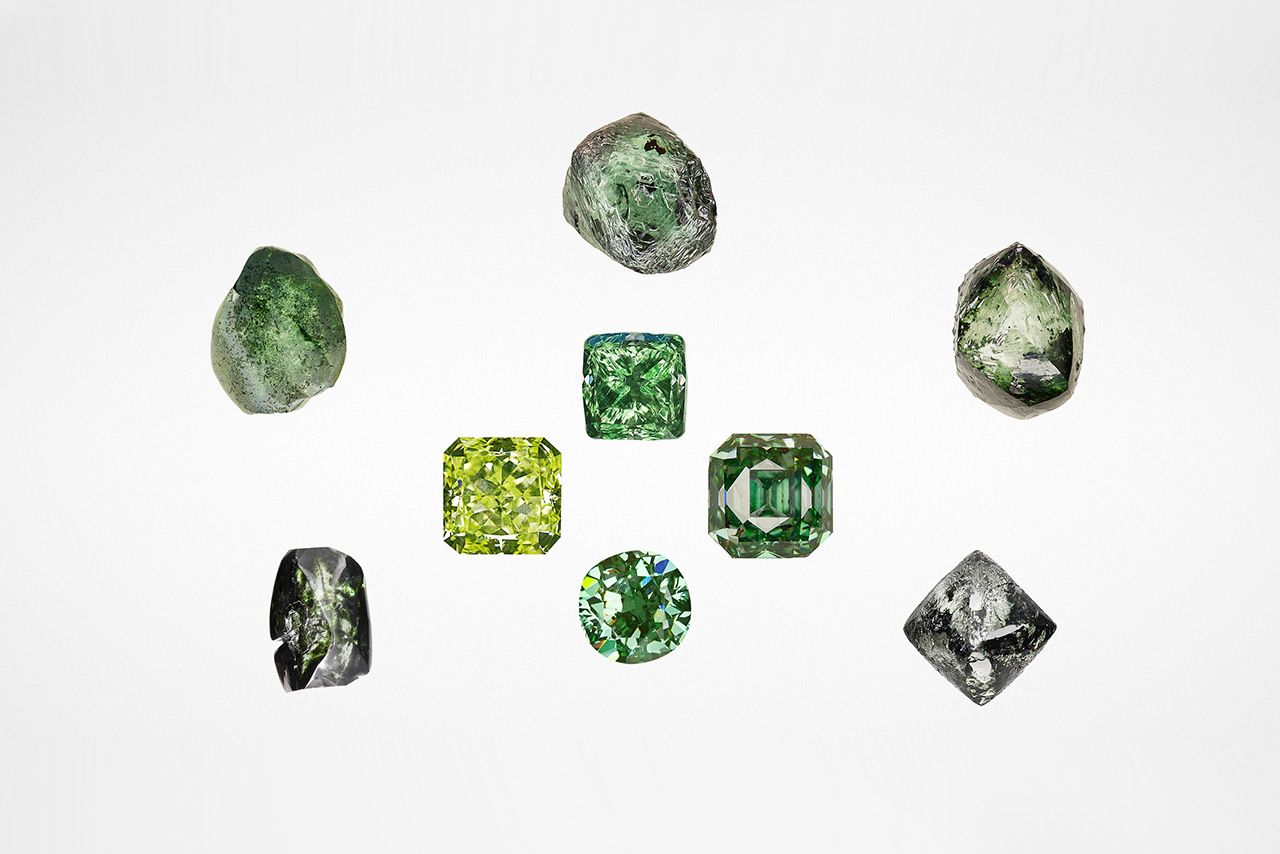 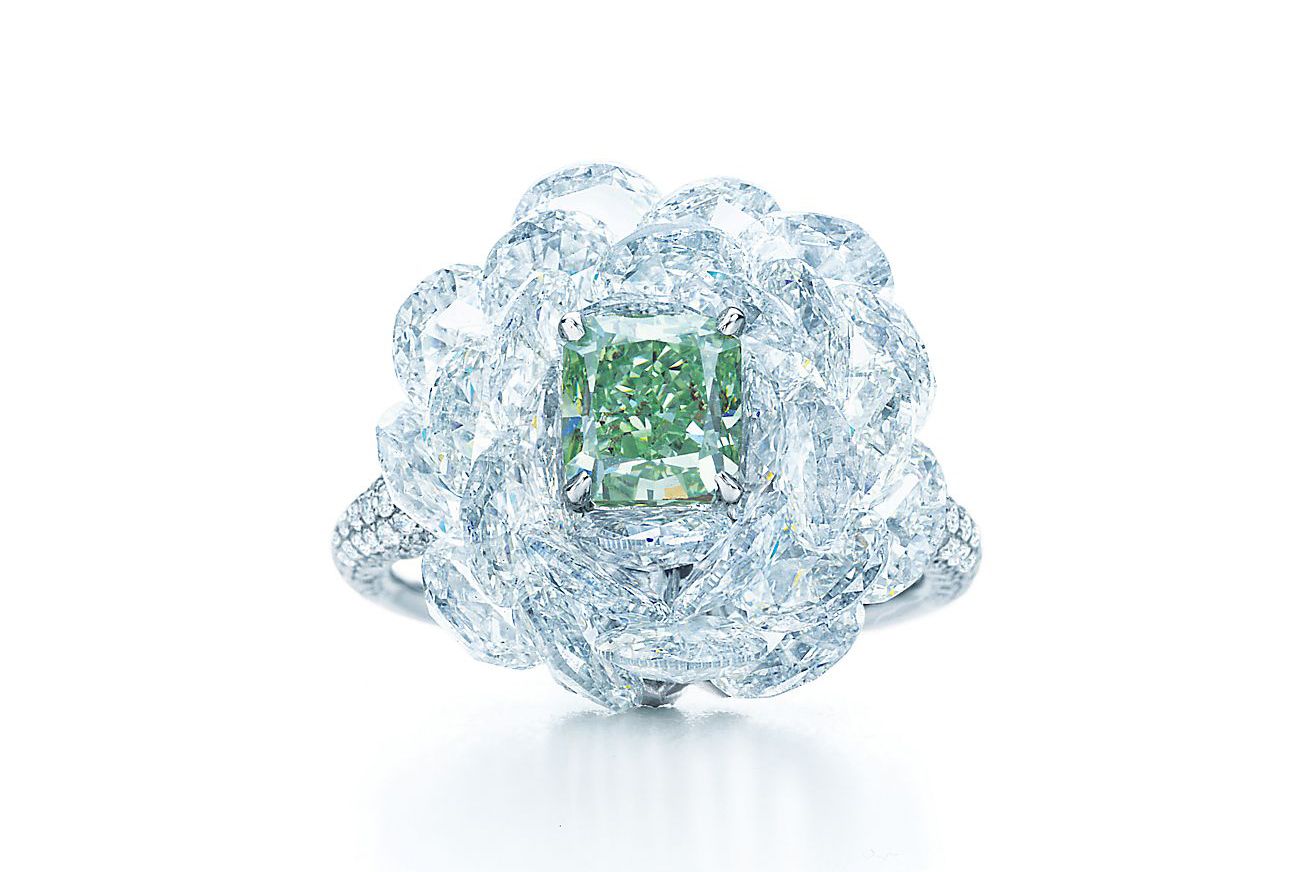 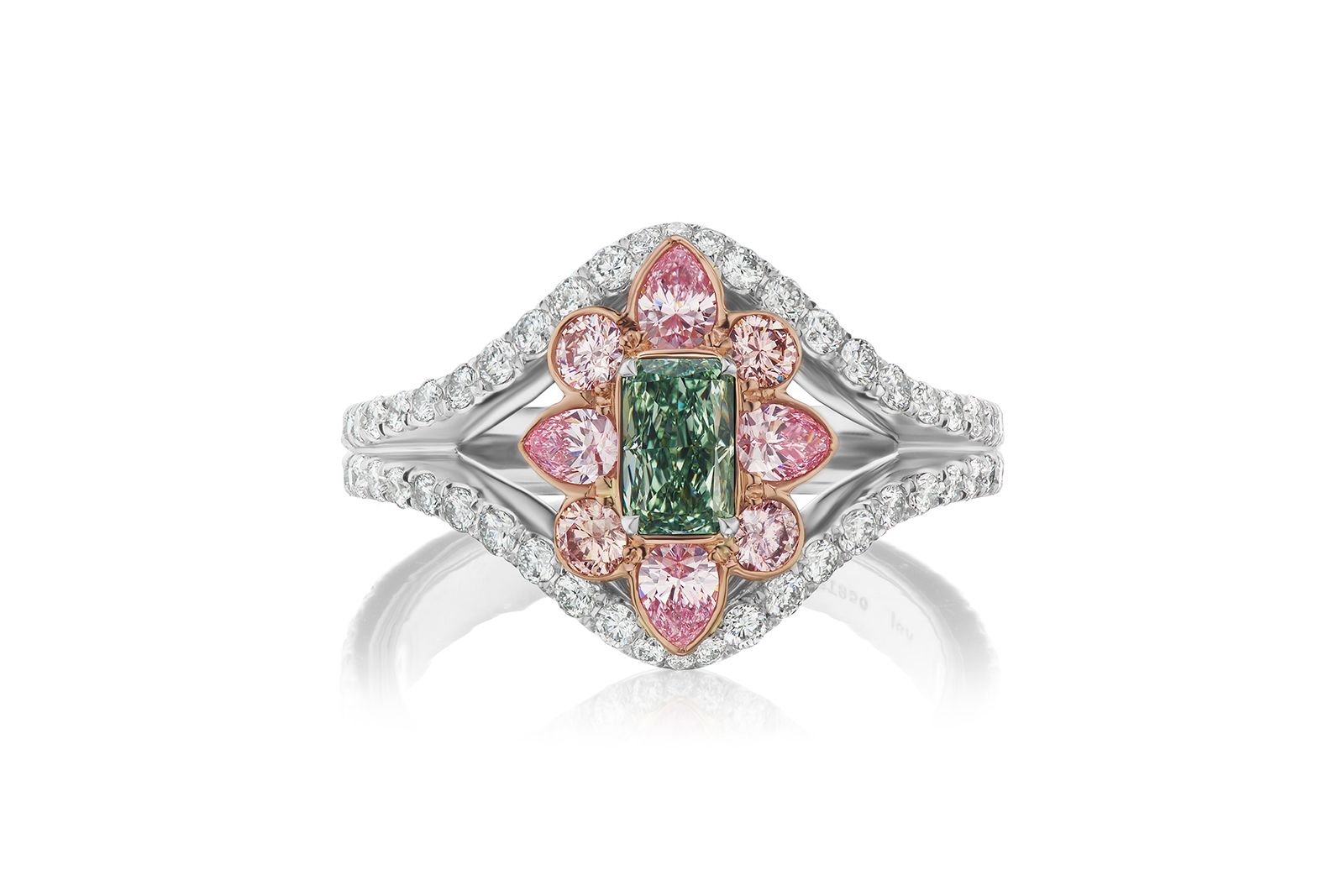 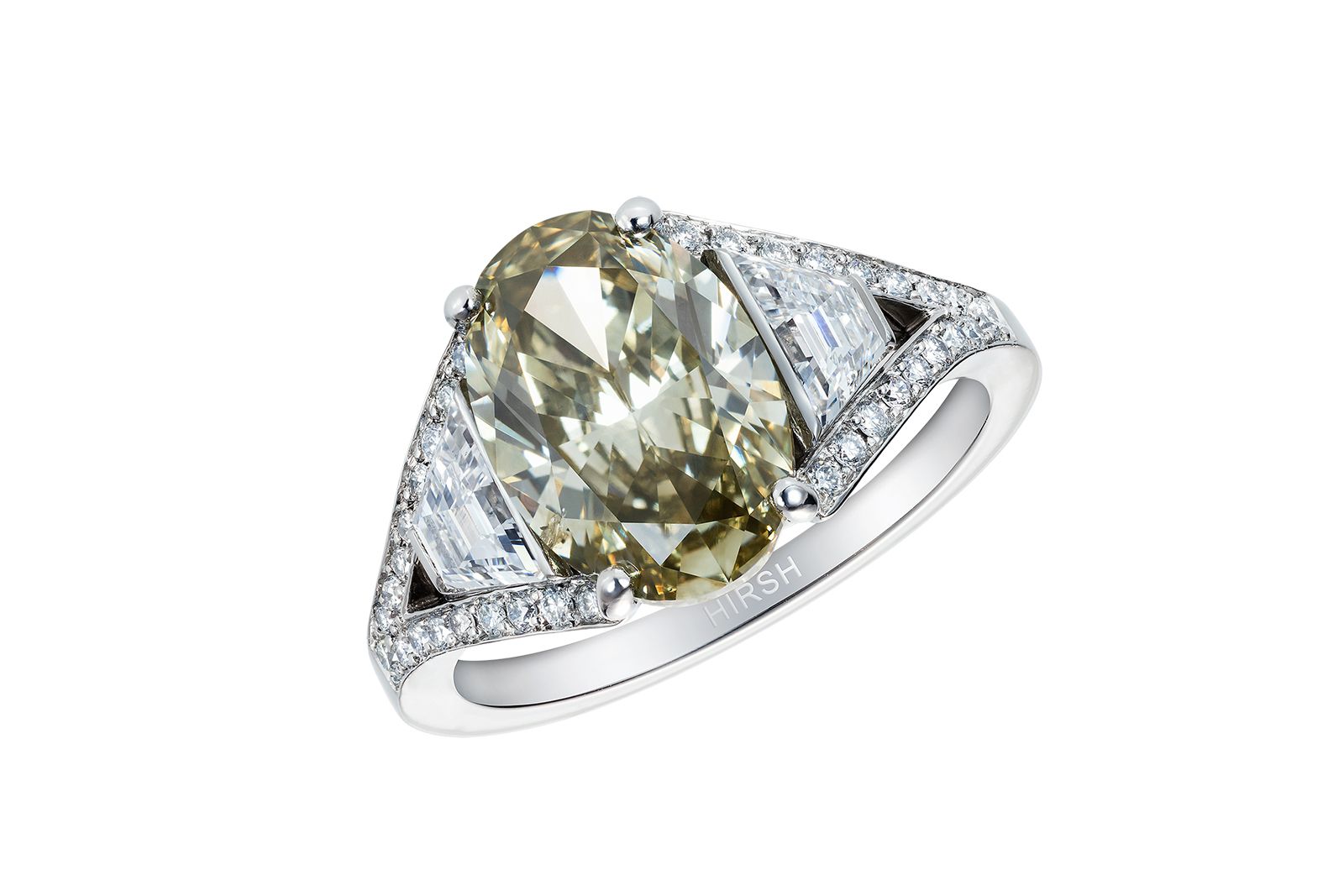 As she’s already been proposed to with a pink diamond and a blue diamond, perhaps it was inevitable that Jennifer Lopez would take her adoration of fancy-colour diamonds to the next level. By choosing green, she’s welcoming more people into the fascinating world of fancy diamonds and providing more opportunities for conversation about these remarkable natural feats. I for one am very pleased indeed!