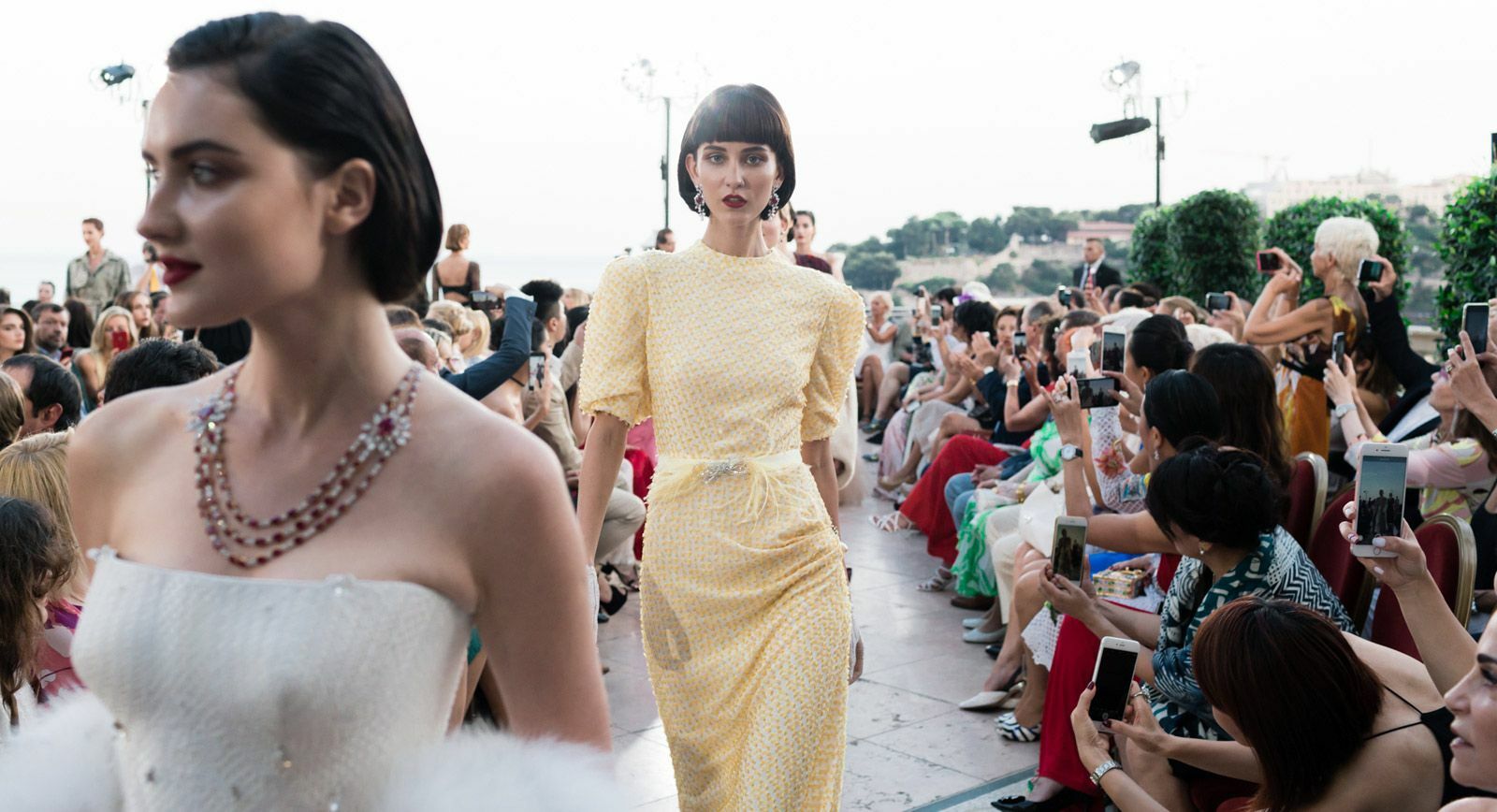 The most powerful moments in life only happen once and, as a rule, produce such a lasting impression on a person that they remain forever engraved on their memory. One such moment that I can pick out was my attendance at the Faidee gala opening of its unique exhibition of natural Burmese rubies held in Monaco.

For the very first time in the history of jewellery making, more than one hundred inimitable pieces of jewellery made with natural precious corundums from the Mogok valley were brought together and exhibited in the Belle Époque salon of the luxurious Hermitage Hotel. For events of this scale, companies end up preparing for anything from a couple of months to a few years, but the maison Faidee broke all records: to create such a large number of jewels with rare stones practically required a century and the work of four generations of the Lunia family who formed Faidee. 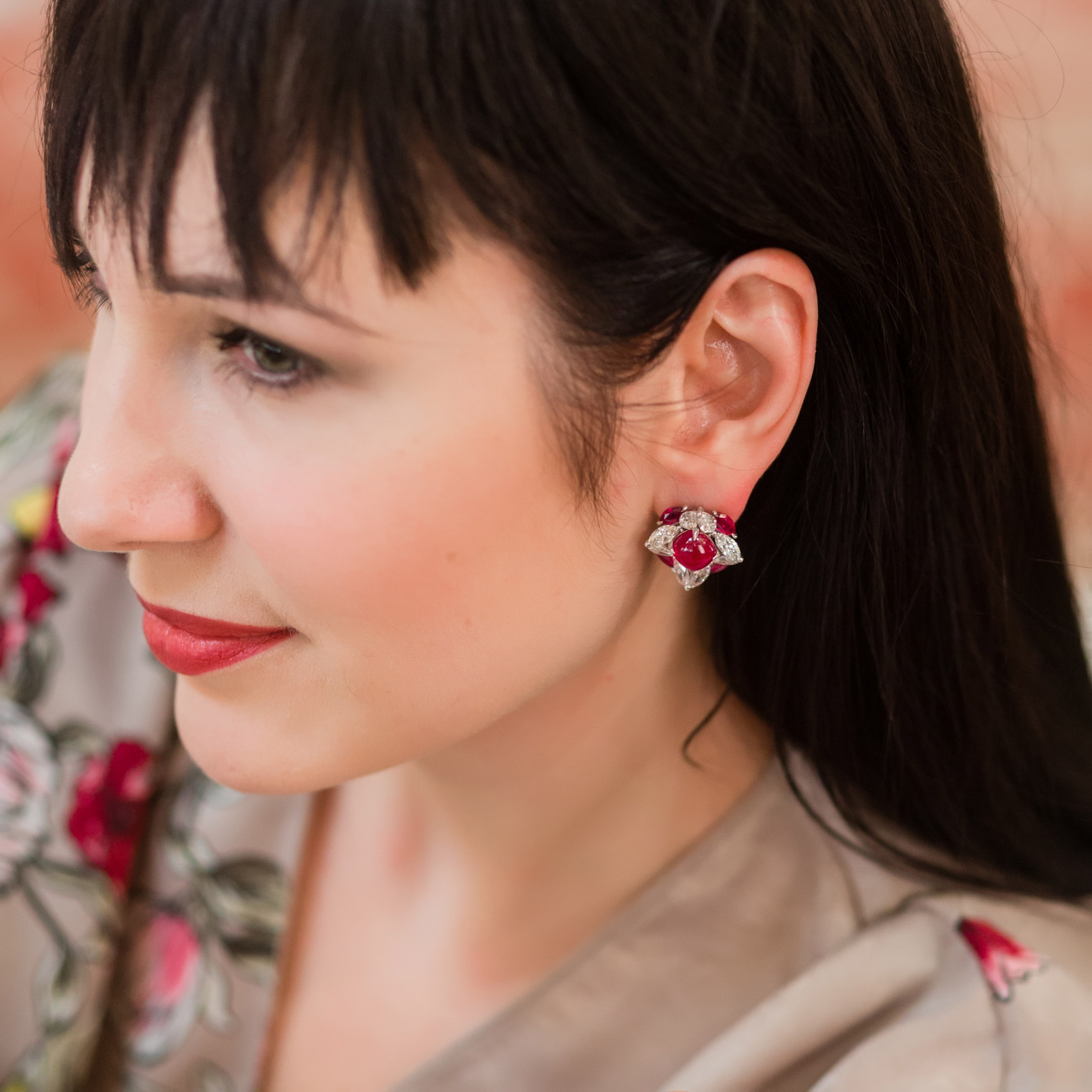 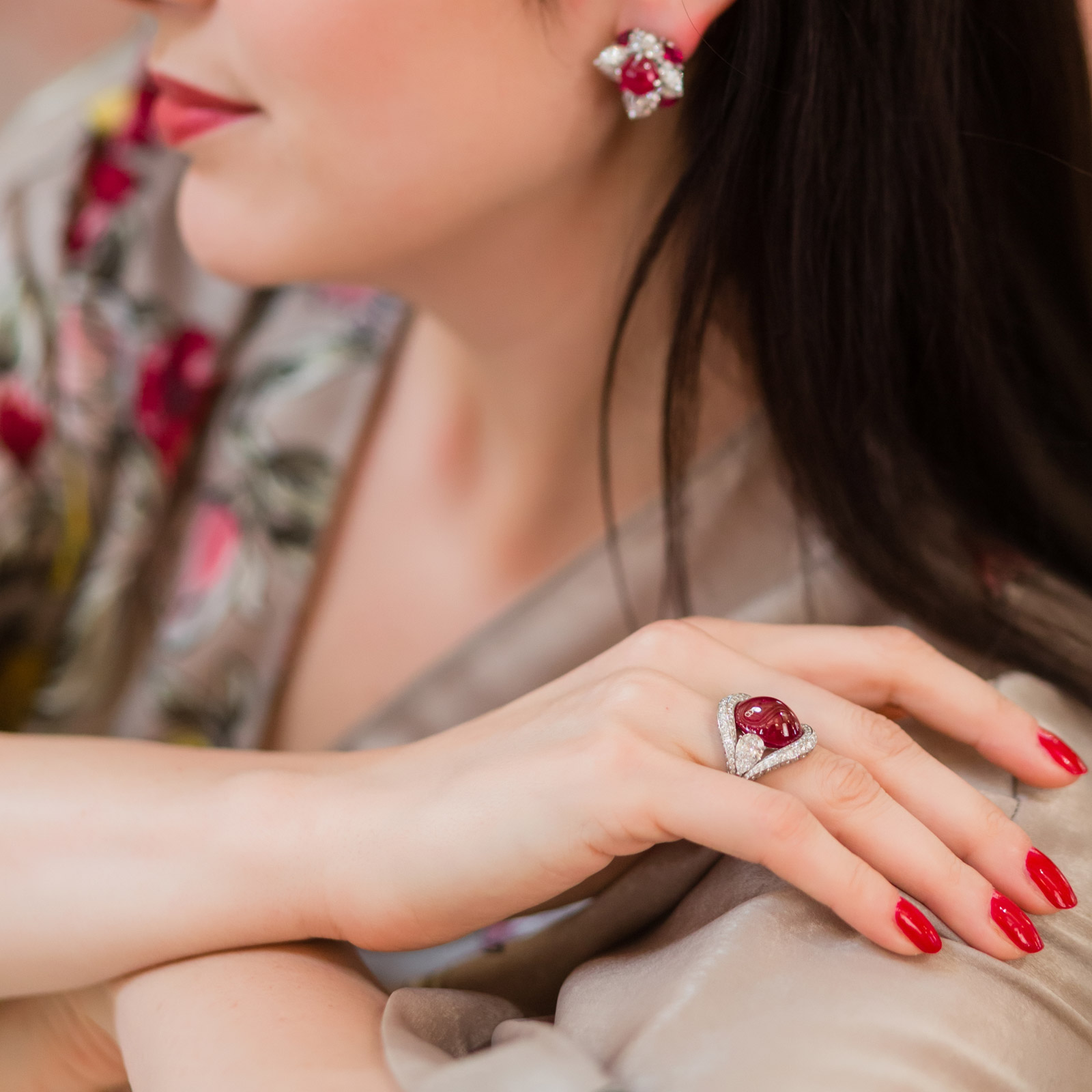 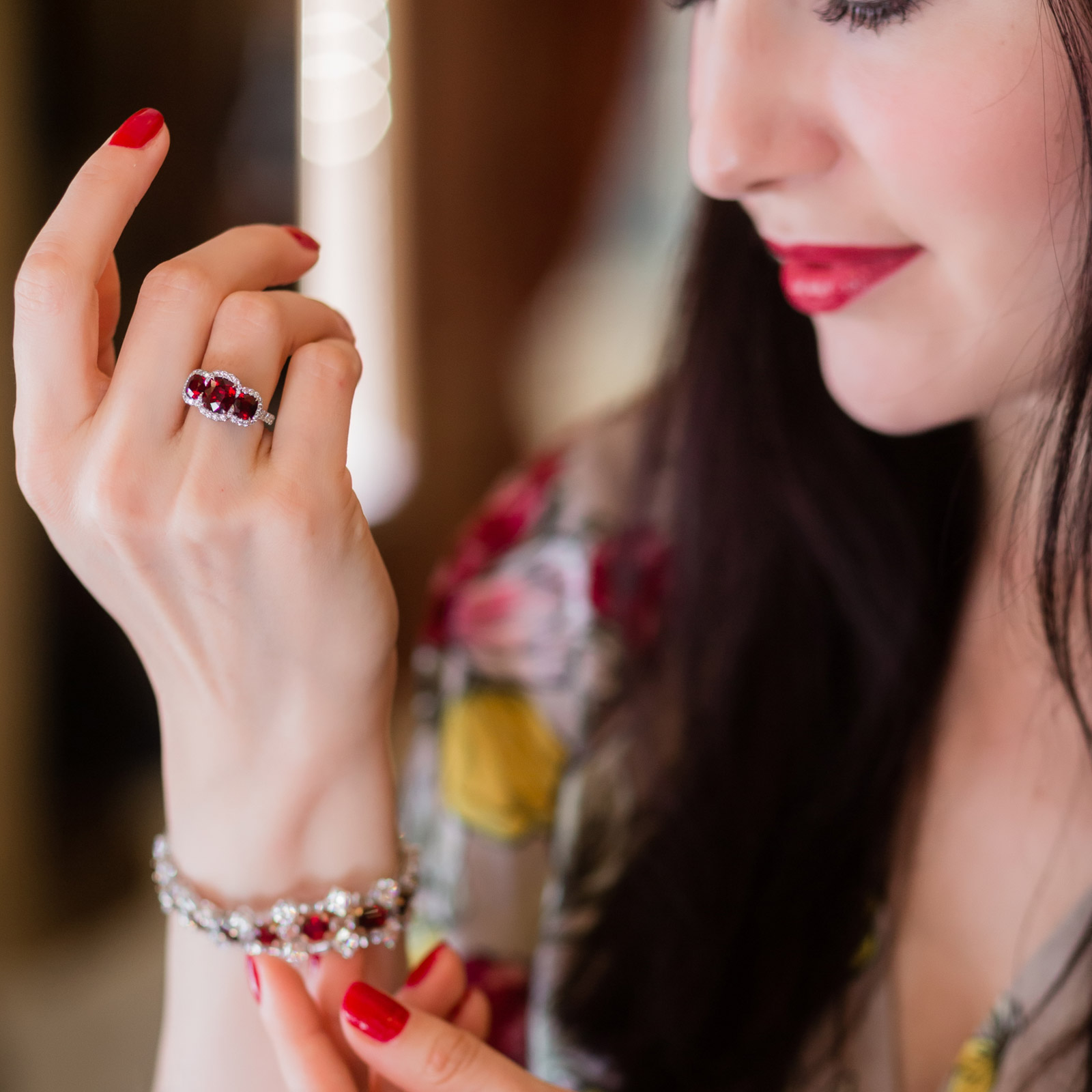 From its beginnings in 1900, the company’s founder Roop Chand Lunia was trading precious stones of the very highest quality, working primarily with red corundum. As he collected the best cut rubies and their rough crystals, Roop paid particular attention to their colour and kept a number of “pigeon blood” specimens in his personal collection. It would be interesting to know whether he knew that, on one fine day, his treasures would serve as the beginning of an unbelievable jewellery collection, unlike one there has ever been.

Specially for the opening of the exhibition, Faidee, together with events management company Lazurevents, prepared an exclusive evening. For the night of 3 August, the terrace of the Hermitage Hotel was transformed into a podium with seats for 250 guests and addressing them was specially invited fashion designer Ulyana Sergeenko. VIPs and celebrities flew into Monaco from different ends of the earth to enjoy the Ulyana Sergeenko Couture collection on display alongside Faidee’s jewellery. The event couldn’t do without some particularly high profile people, including Svetlana Bondarchuk, the singer Natalia Chistyakova-Ionova, Alla Verber, the opera singer Aida Garifullina, Nadezhda Obolentseva, Inna Sosin, Galina Agapova and photographer German Larkin. 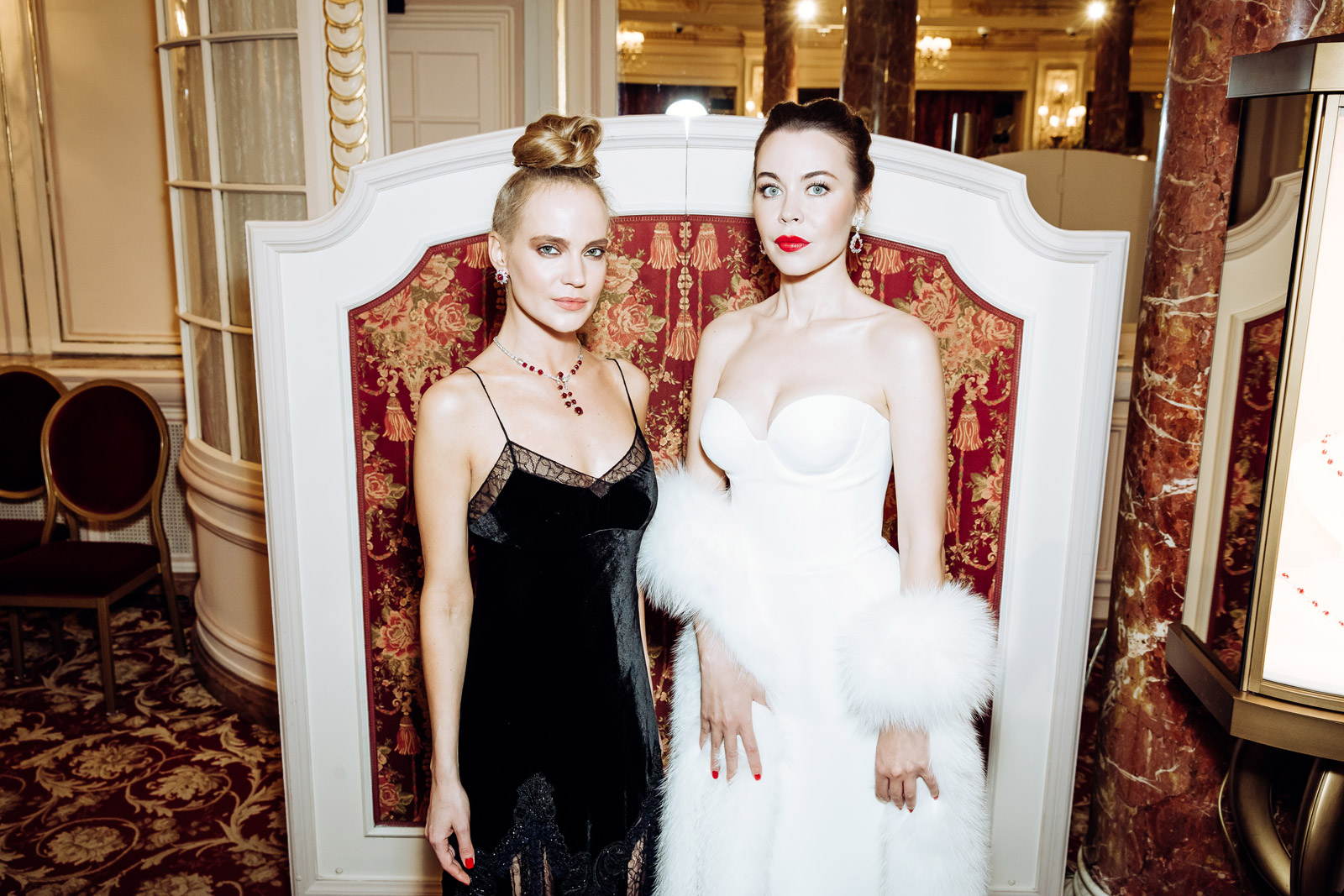 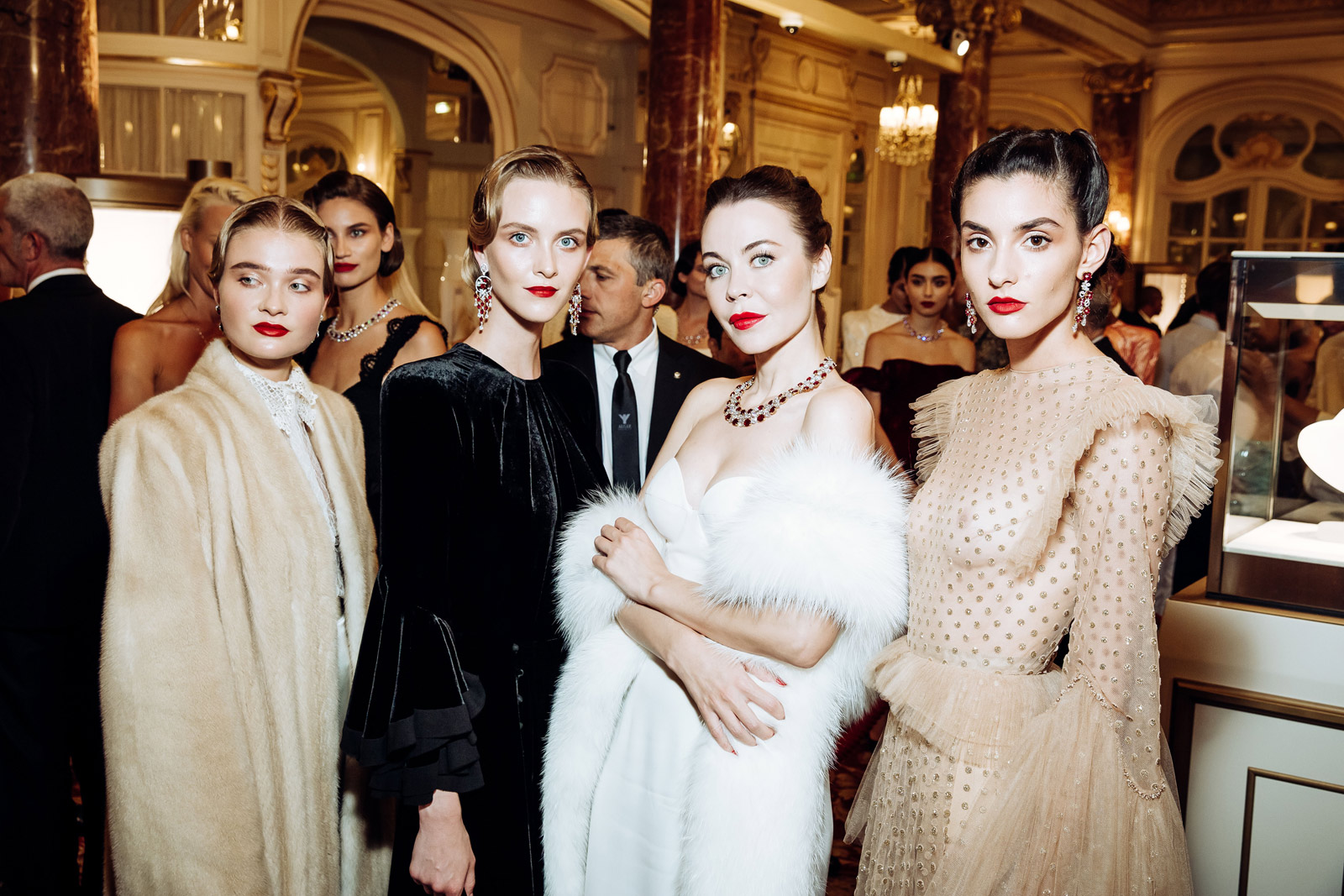 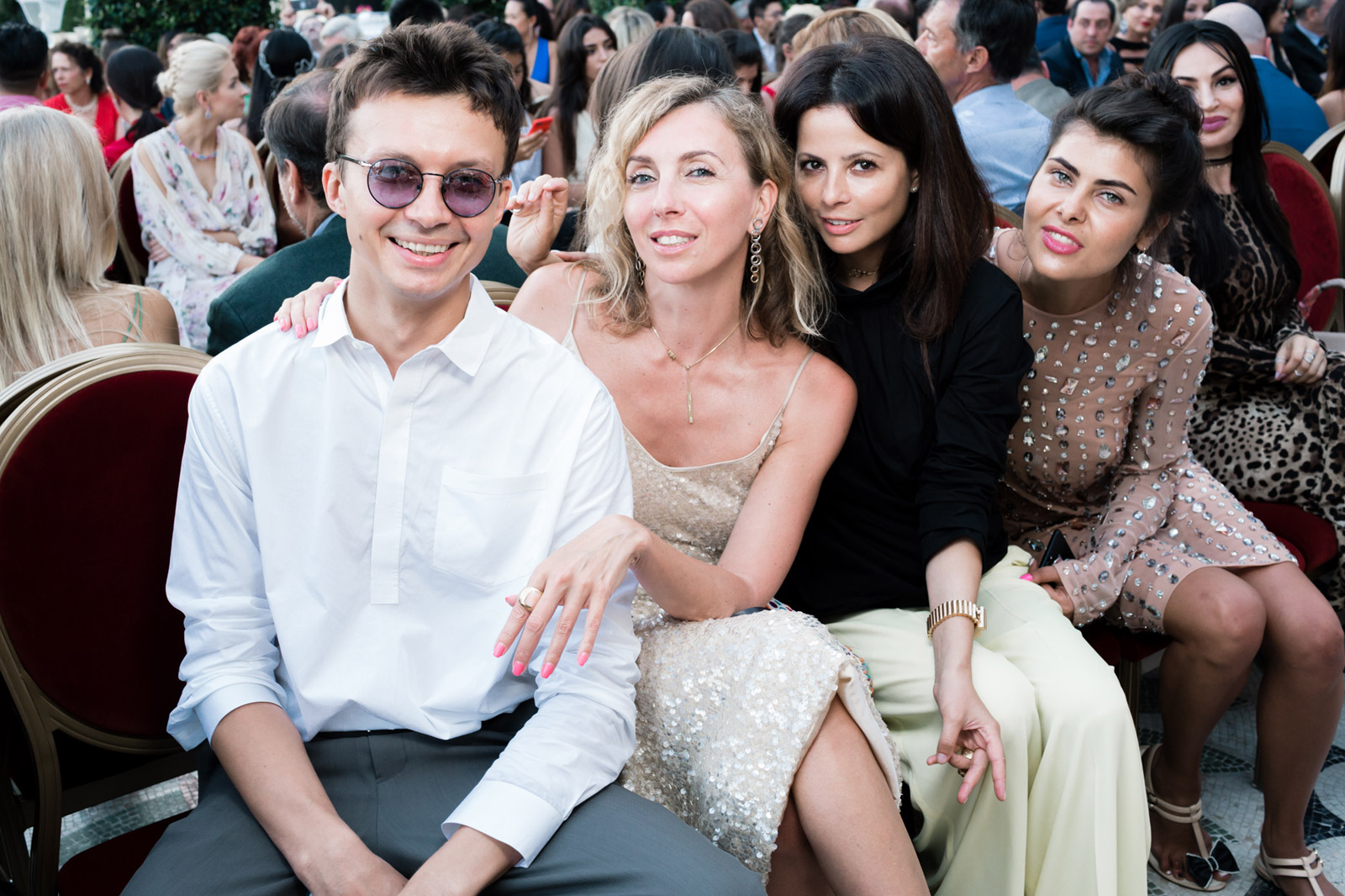 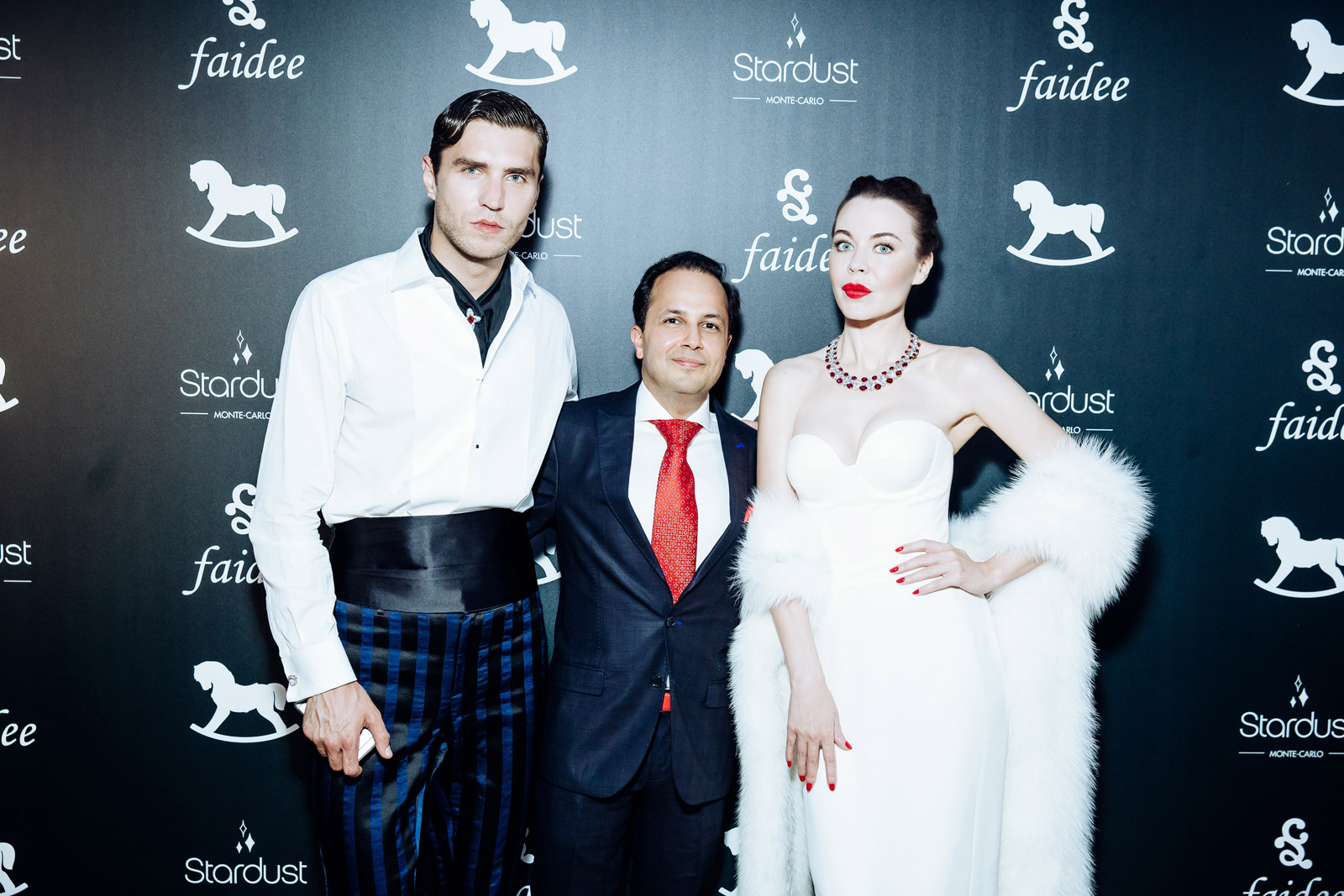 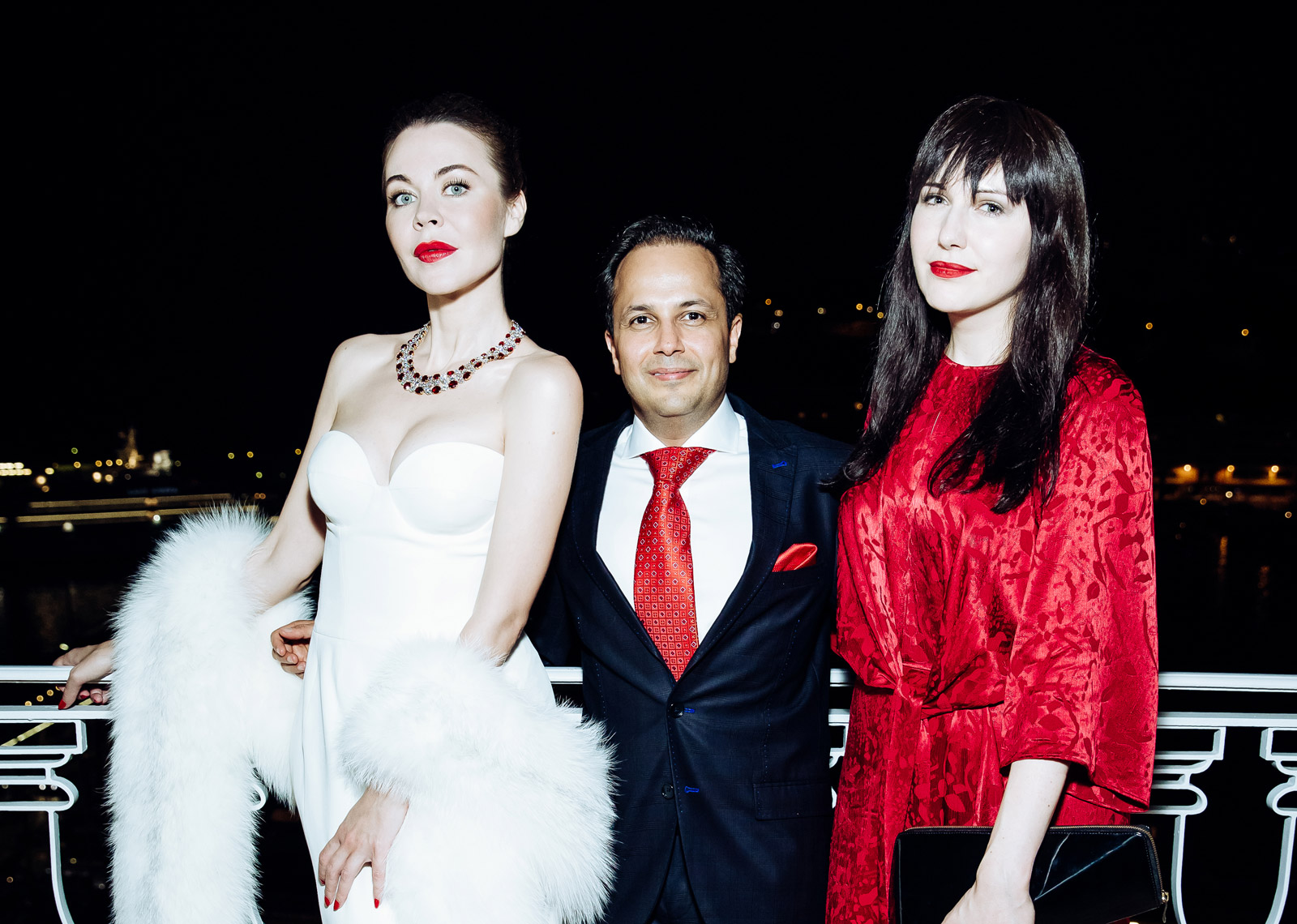 After a lovely cocktail in the Belle Époque salon, the guests were invited to take their places, beautiful red chairs on the Hermitage terrace embroidered with colours that have become a signature of both brands. Once the guests had taken their seats and the music started playing, the first person to take to the stage was a model in a floor-length snow-white gown with a fur cloak over her shoulders. Her décolleté was adorned with a “three-tiered” necklace with bright red Burmese rubies and glittering colourless diamonds. She was followed by models in black, burgundy, soft pink and pale yellow dresses all complemented by elegant Faidee jewellery pieces.

It was as if the plunging necklines of the dresses and corsets were specially cut for the magnificent necklaces whilst the high collars were designed for the long earrings. I never imagined that during the catwalk I would only be thinking about how harmonious and extravagant these two brands would look together. The combination of the carefully crafted silhouettes of Ulyana Sergeenko’s outfits with their muted colour palettes and the fiery red stones glistening on the necks, wrists, ears and fingers of the models looked simply show-stopping. 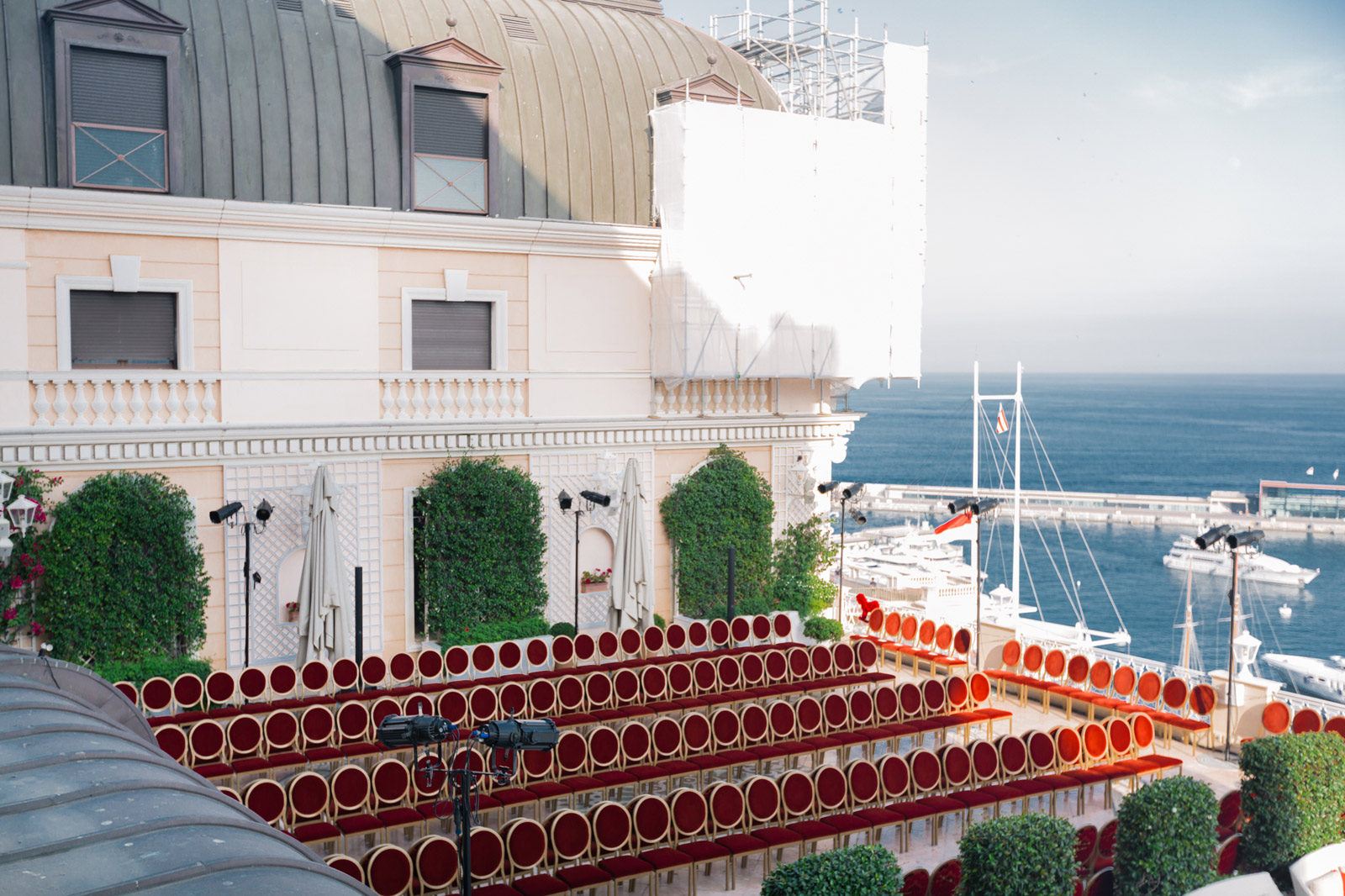 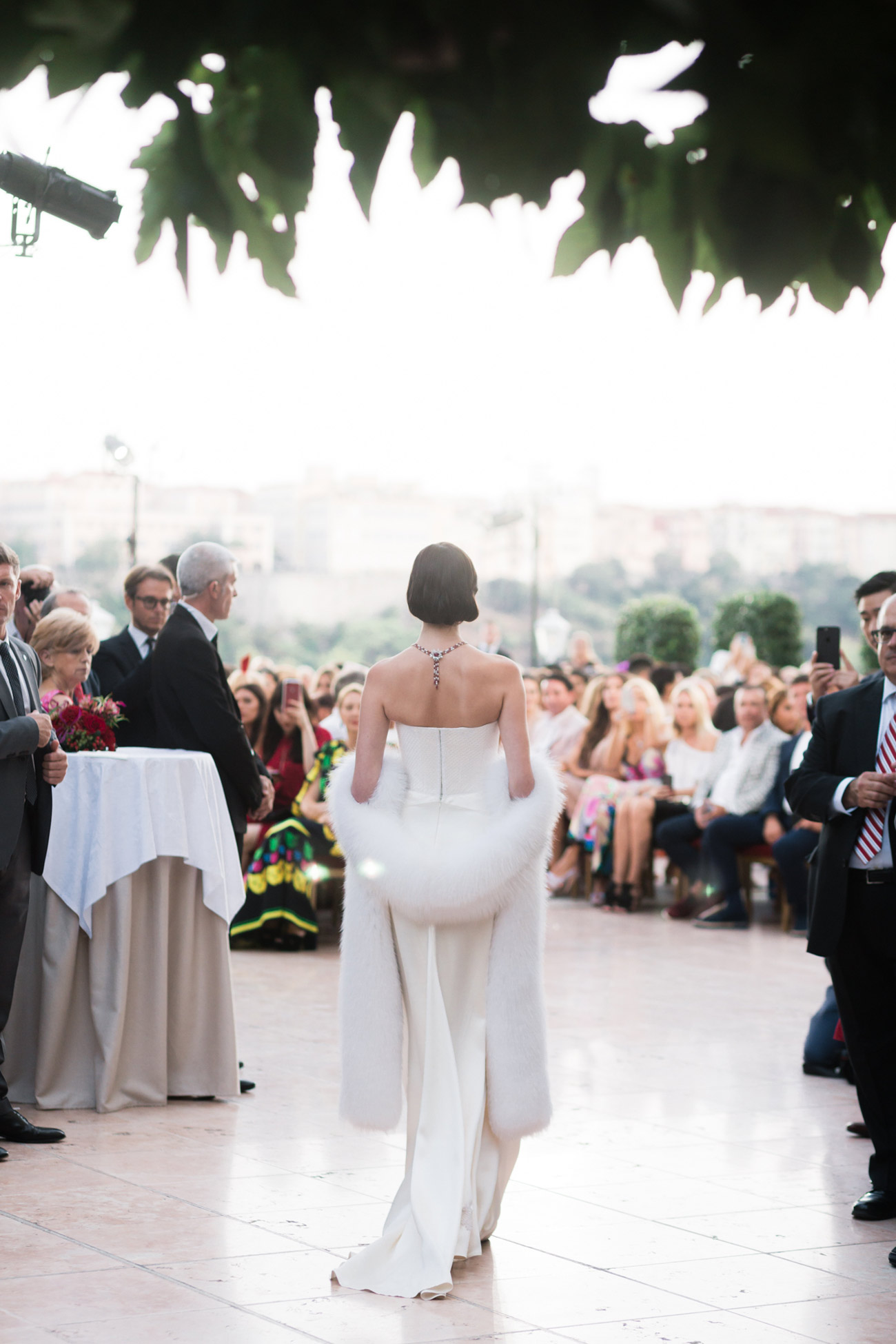 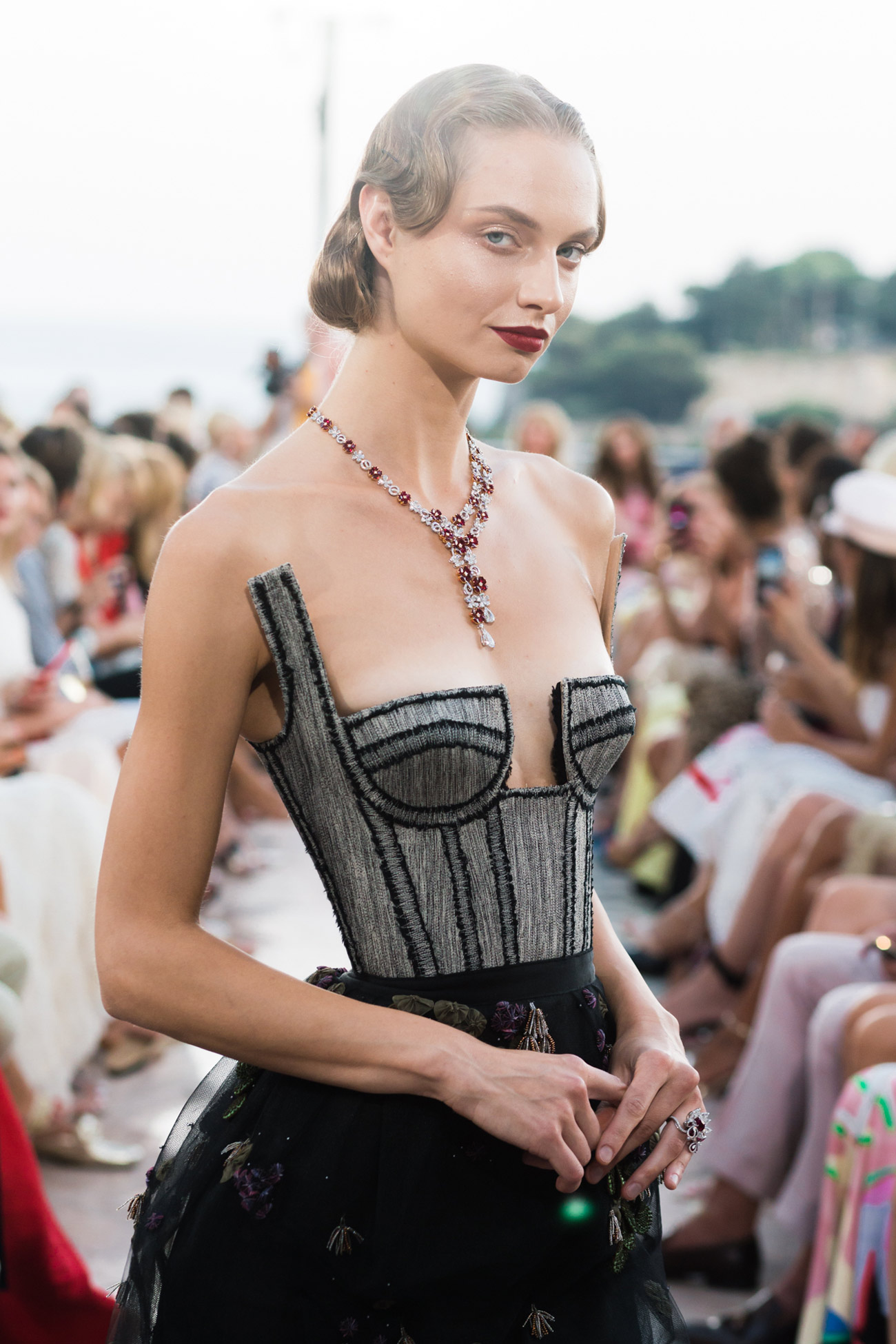 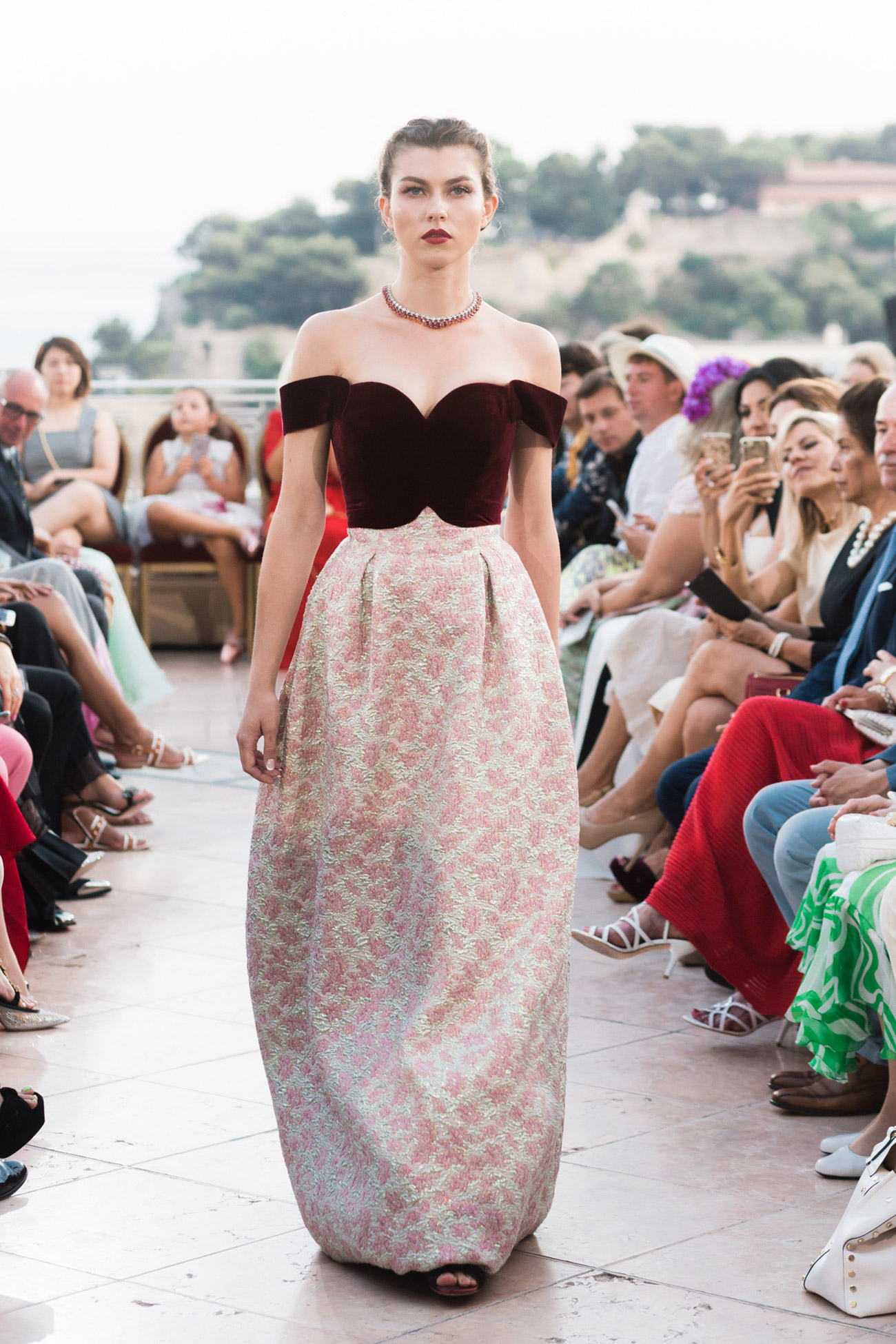 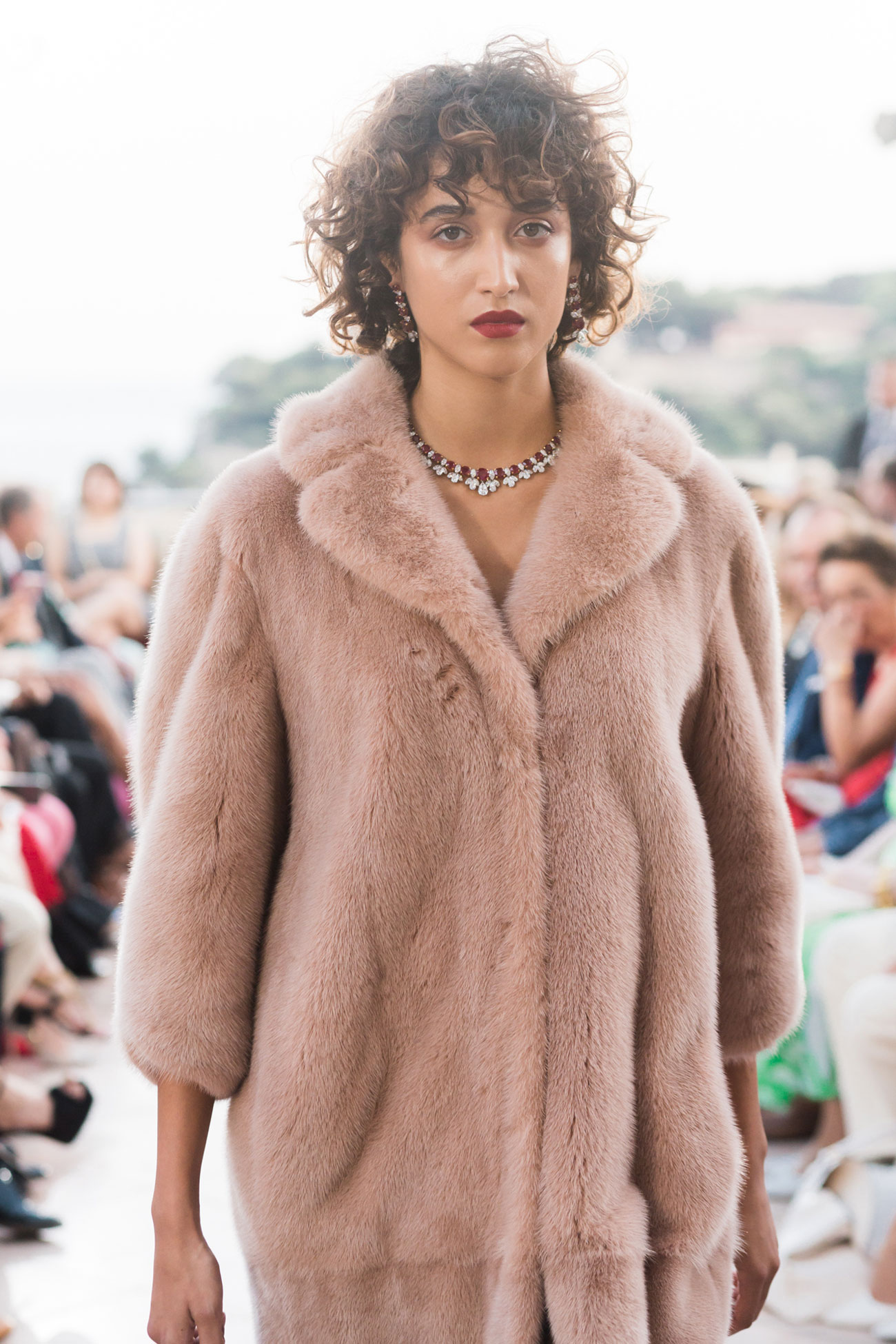 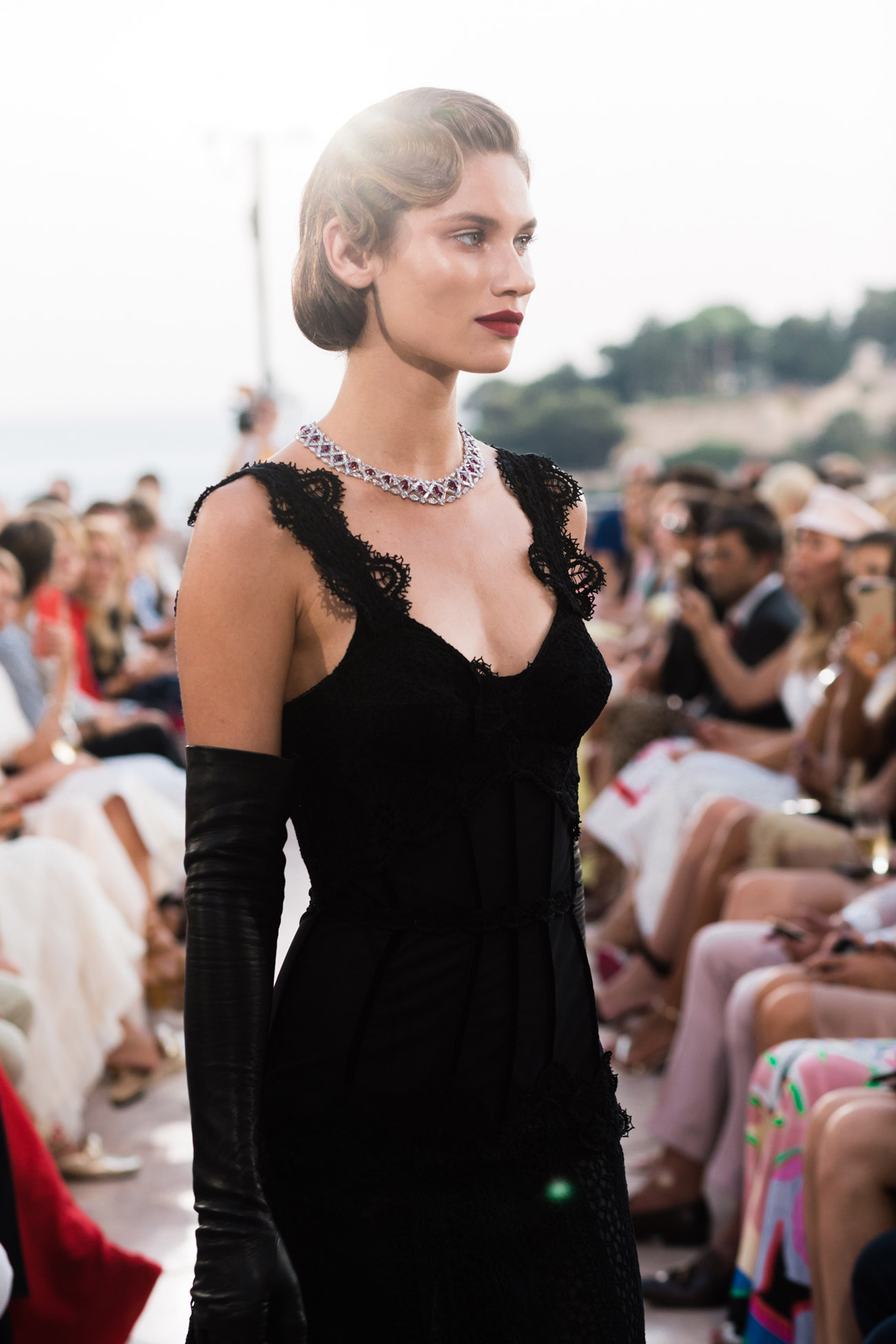 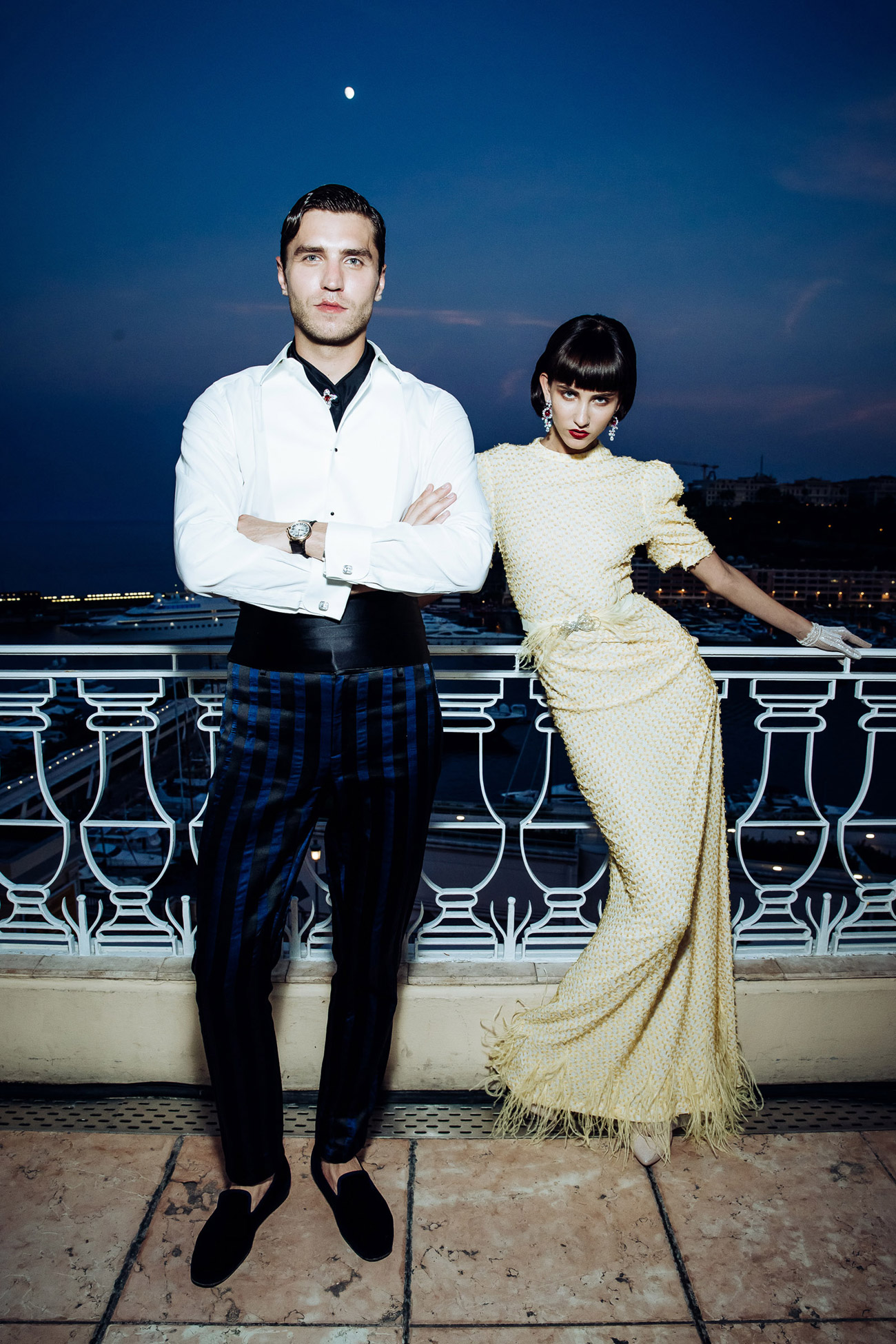 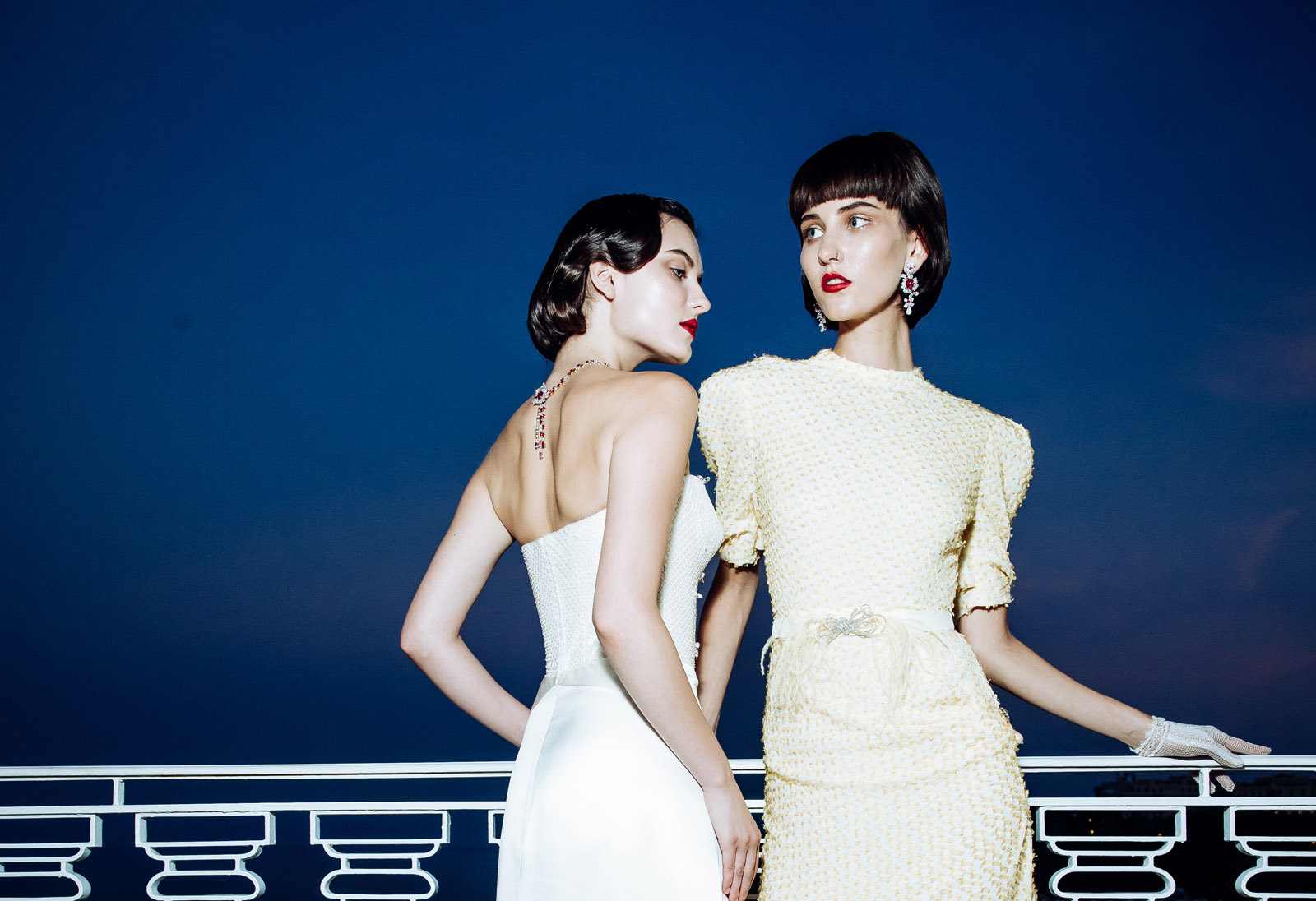 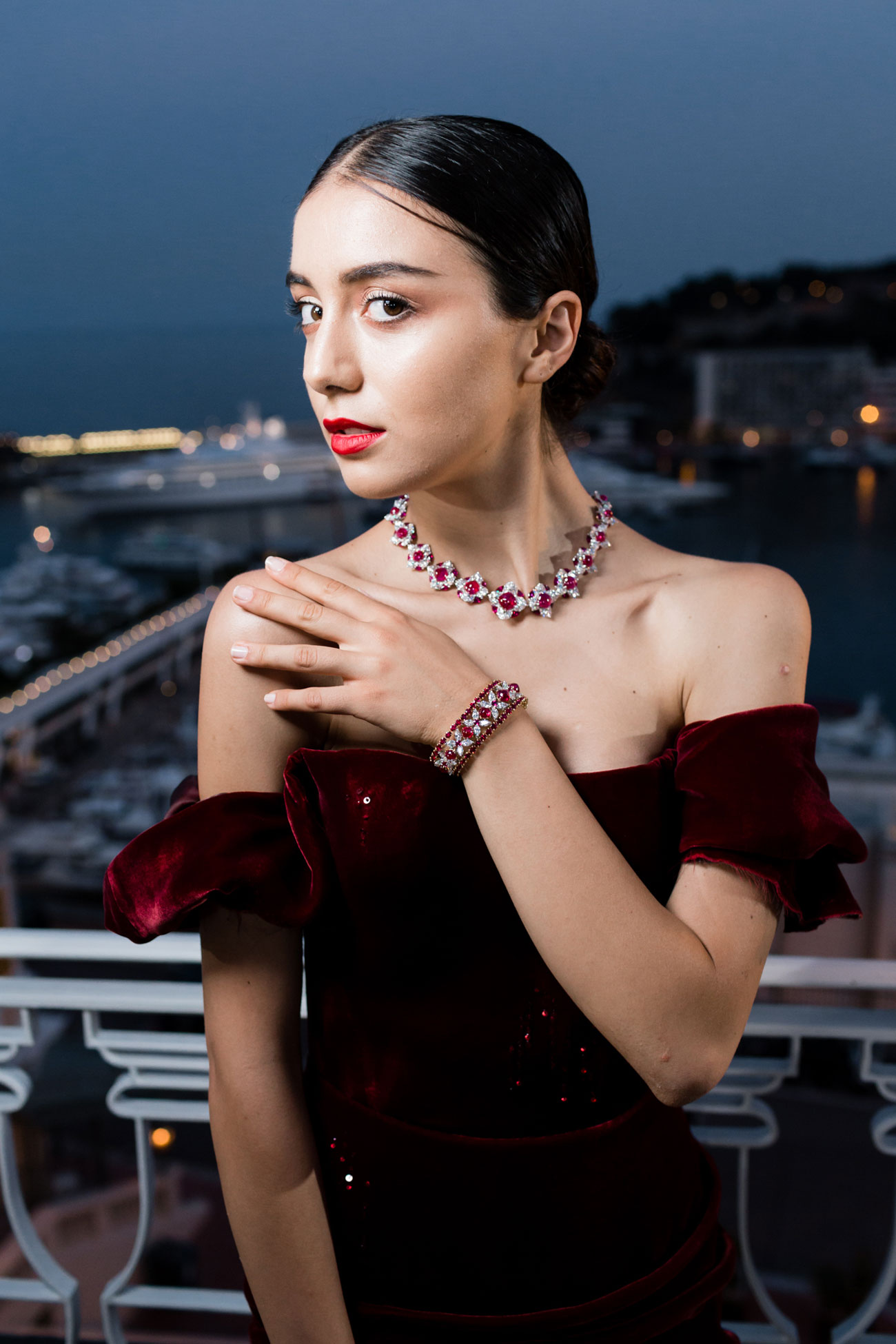 After the catwalk, the guests did not rush to leave; in fact, the evening was long from over. The inauguration of the jewellery exhibition was not complete before the programme’s “main event”: an especially valuable piece that made everyone gasp. Faidee’s Director Ravi Lunia gathered the guests in the centre of the salon for the official presentation of the Imperial Necklace which was made with fifty exceptional Burmese rubies with a flawless “pigeon blood” colour. Each stone was perfectly matched by hue and intensity of colour. Not one of them had been subject to the thermal treatment.

Eight of the Burmese rubies used belong to a category of particularly rare super gems that exceed five carats in weight and possess the attributes of stones that are of the very highest quality. One hundred carats of top quality clear colour D diamonds “stretched” the red colour palette with their sparkling whiteness. 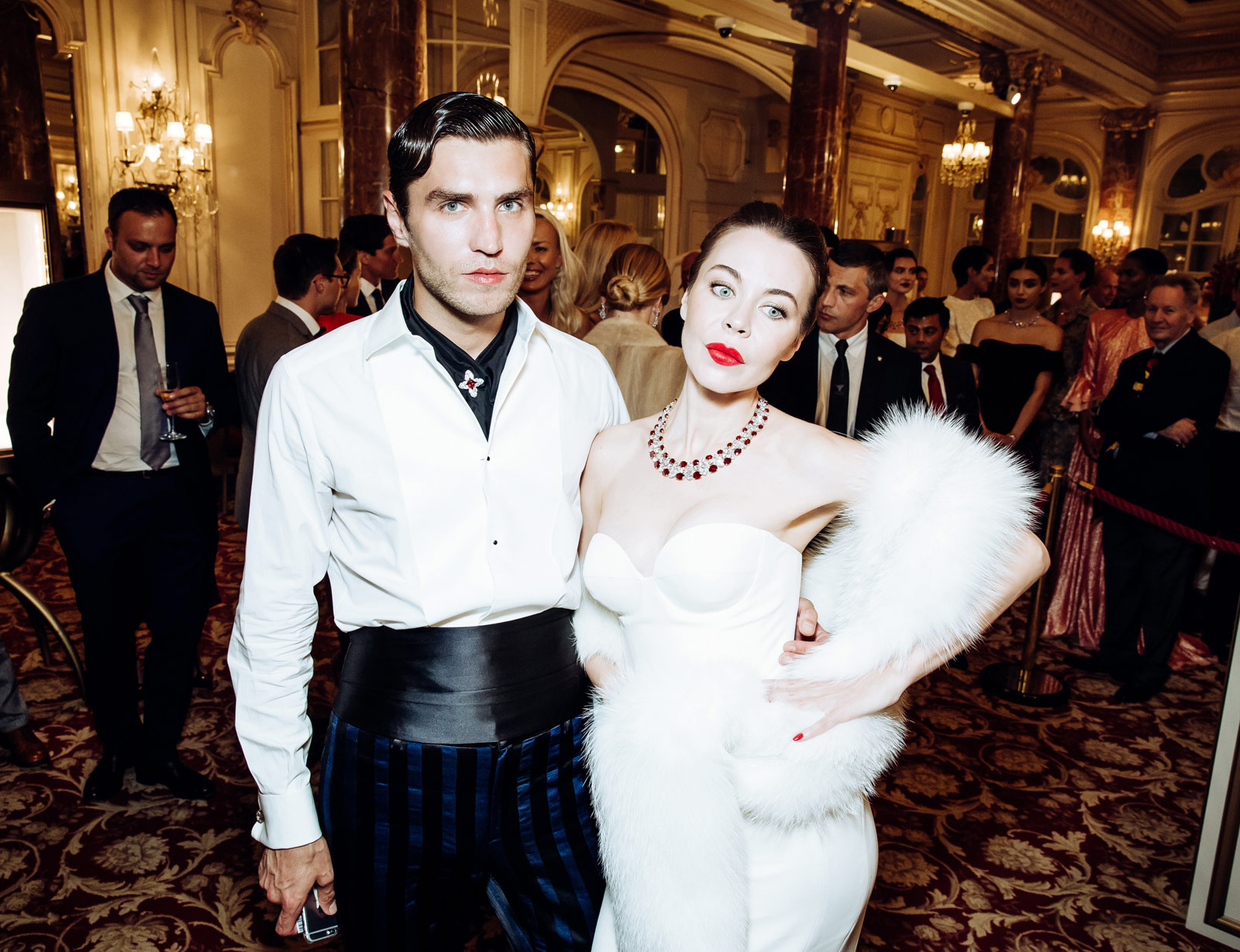 “We are the first to make such jewellery masterpieces. No one would be able find the required number of natural Burmese rubies with this singular “pigeon blood” colour. Even we couldn’t have imagined that we would one day show the world such a rare treasure. We have been crafting the Imperial Necklace for four generations, a journey that started with my great-great-grandfather Roop Chand Lunia, the famous “King of Burmese Rubies”. Some of the stones he collected have been passed on to us, a number of which have been used to decorate the Imperial Necklace,” remarked Ravi Lunia, Director of Faidee.

The first exhibition of Burmese rubies has already closed its doors, but talk of it will continue for a long time. It could be said that Faidee has shaken up the jewellery industry, proving that even the impossible is possible. Often all that is needed to realise a genius idea is a colossal amount of time and effort, luxuries which very few can say they enjoy.

The exhibition was held with the support of Stardust Monte - Carlo - a longtime Monaco based luxury jeweller.