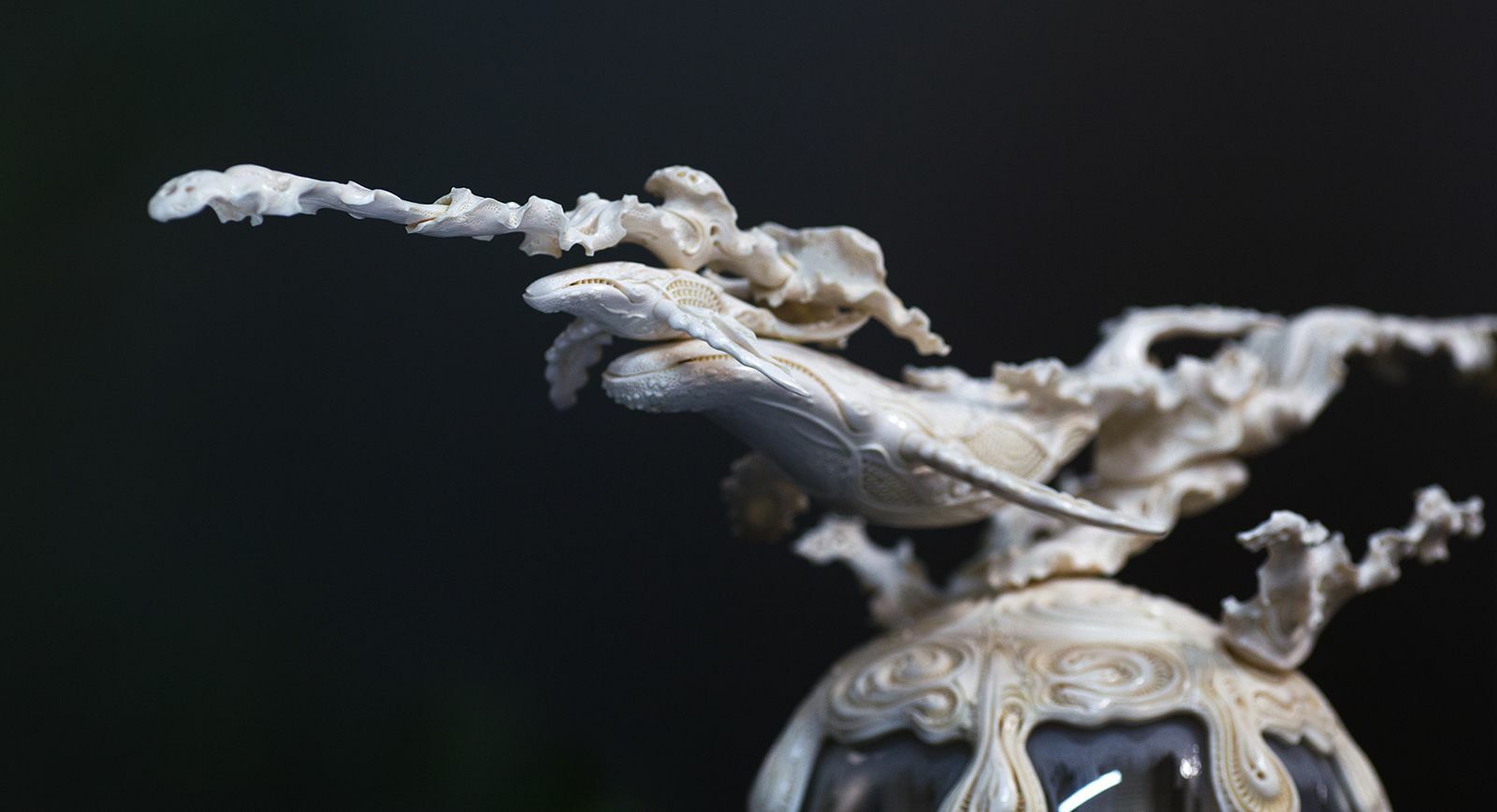 Notivory Art: Art that speaks of the problems in our oceans

The Notivory Art jewellery brand promotes respect for the environment and the use of mammoth tusks as an alternative to the use of ivory in jewellery and other art. From November 27th to December 1st, they will take part in the Russian Antique Salon exhibition for the very first time.

In 2019 – on its 45th anniversary – the Russian Antique Salon will, for the very first time, be held in an entirely new venue at Gostiny Dvor, in the heart of Moscow’s historic centre. This will not be just another exhibition – the main distinguishing feature of the exhibits presented at the Salon is that they will all be of only the highest quality. A diverse collection of astonishingly rare works of fine art and design will be displayed in the streets into which the Gostiny Dvor will be divided. The categories include antiques, art of the second half of the 20th century, jewellery, and vintage work. 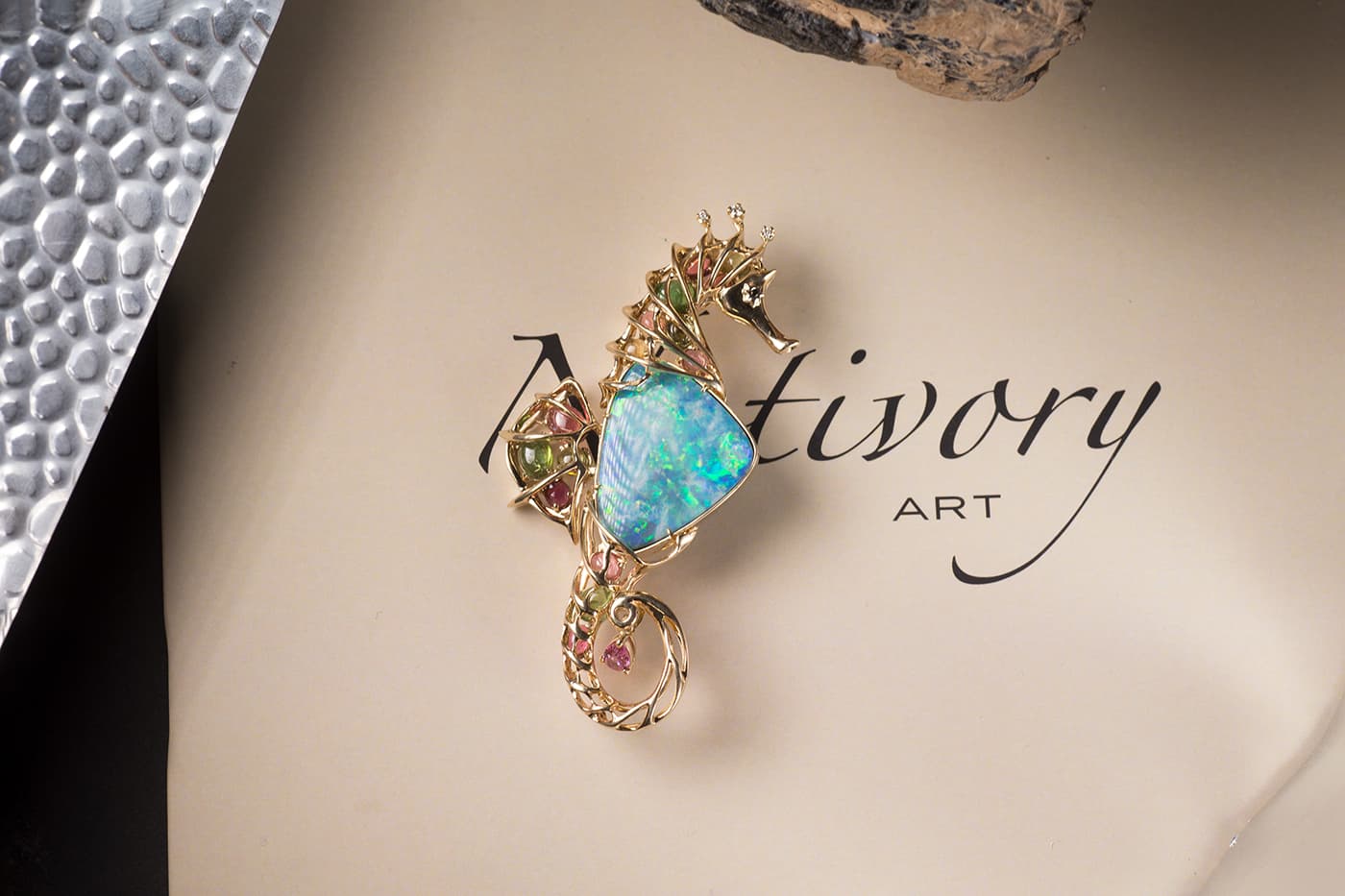 Personally, I am extremely happy that the world will be exposed to the idea behind Notivory Art products. These are not just beautiful, modern, finely executed pieces; each piece of jewellery or sculpture is a story told through sophisticated bone-carving techniques that works to convey a singular and important message to the world: “the world must stop killing animals in order to make jewellery.” 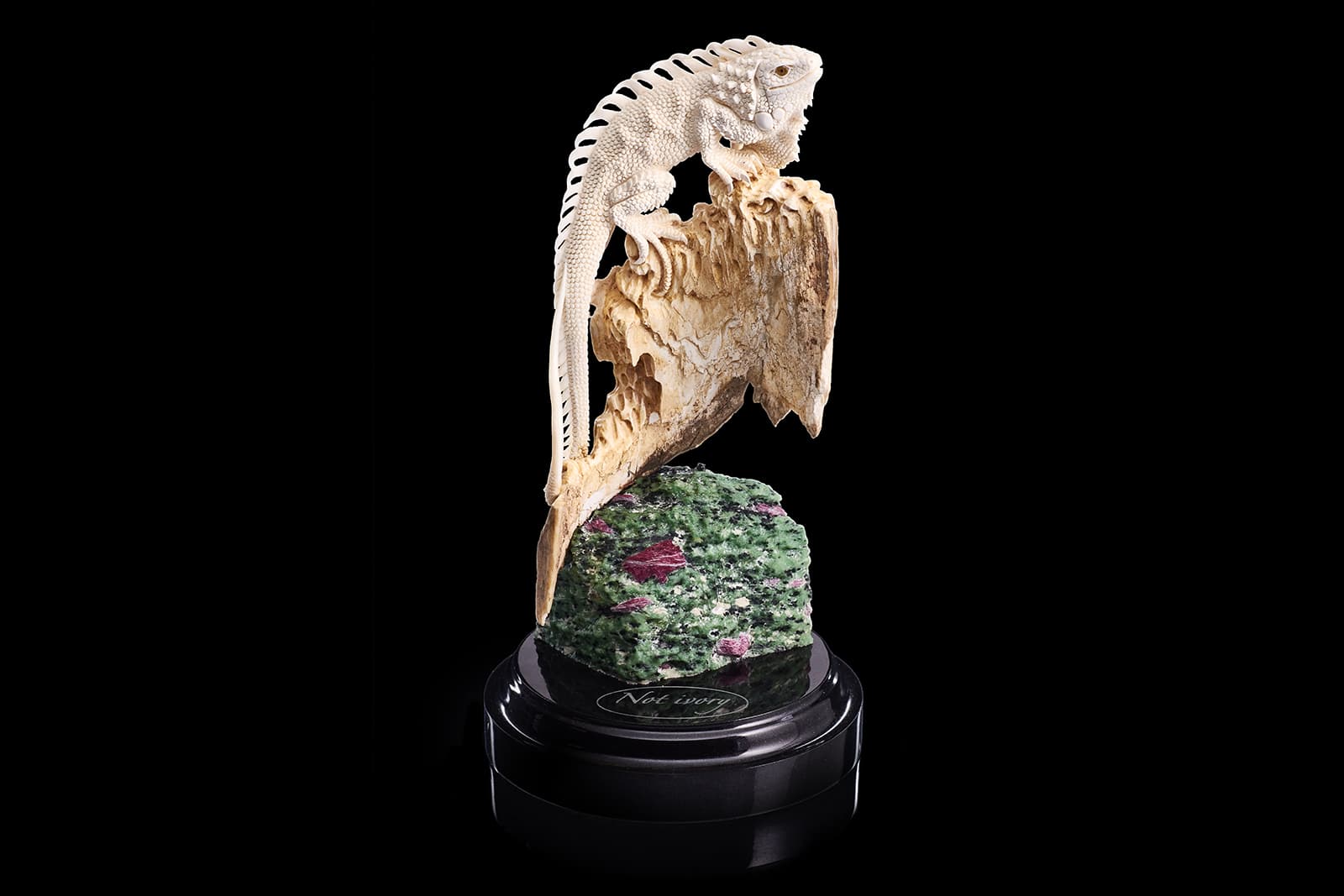 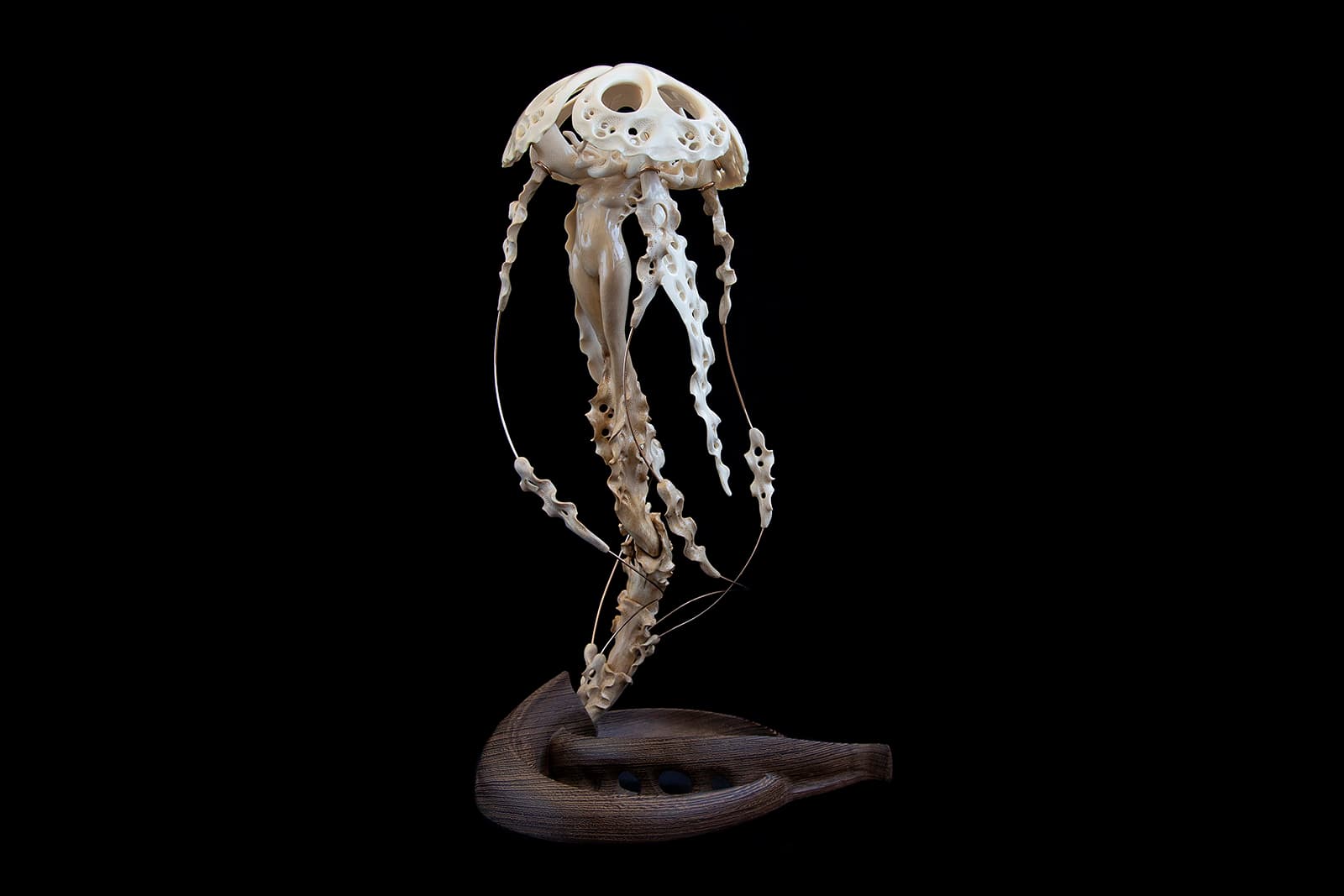 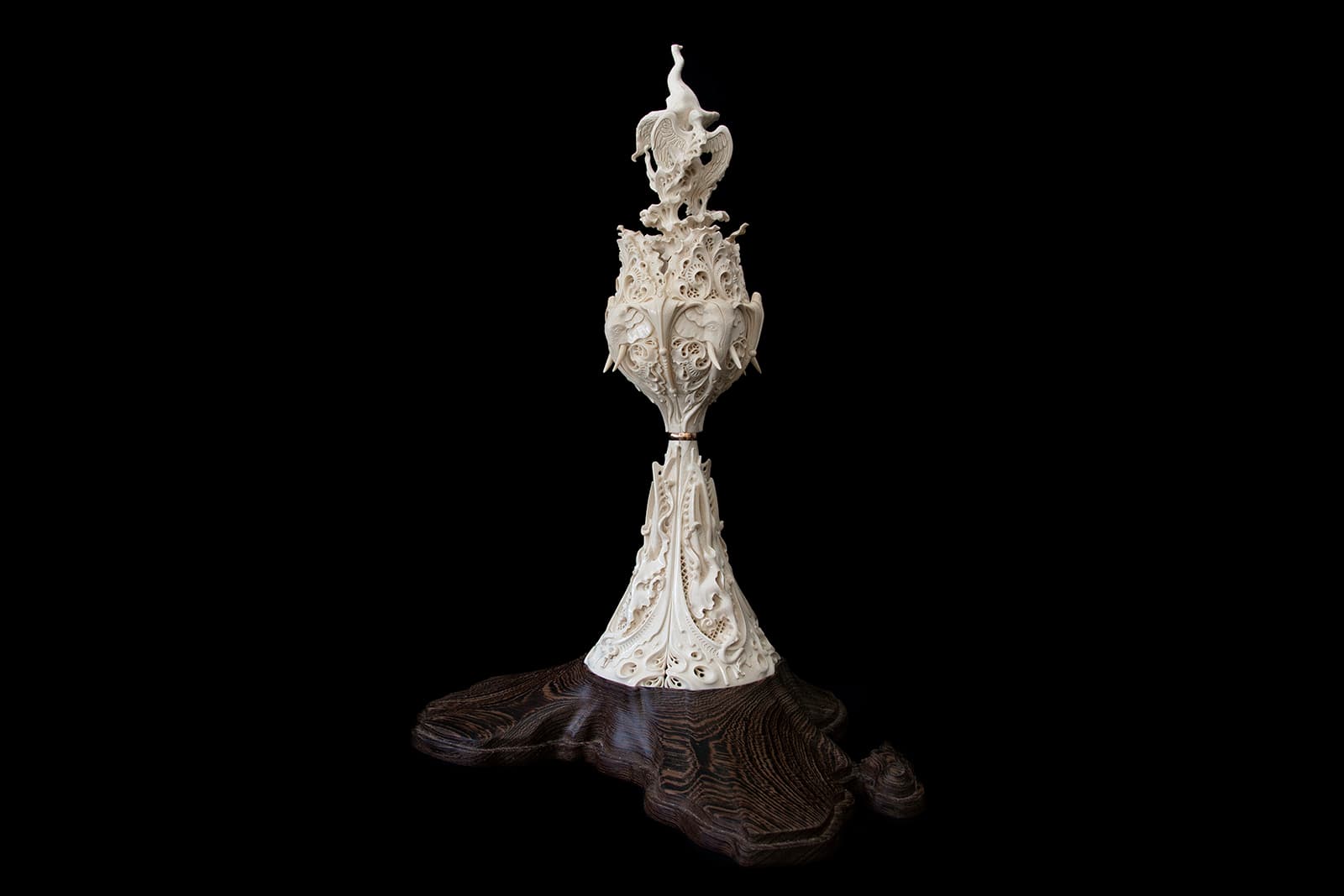 The sculptural piece entitled 'Innocent Souls' will be presented at the show. The work tells of elephants and poachers, of indifference and human greed, and about the harsh realities this species faces at human hands. Another sculpture, 'The Transience of Time, is made in the form of an hourglass and symbolises the inexorable nature of time’s progression. Other noteworthy pieces include sculptures dedicated to an eclectic mix of exotic creatures: the proud and unruly 'Iguana', the prowling 'Far Eastern Leopard', the fantastically beautiful yet deadly 'Medusa'. 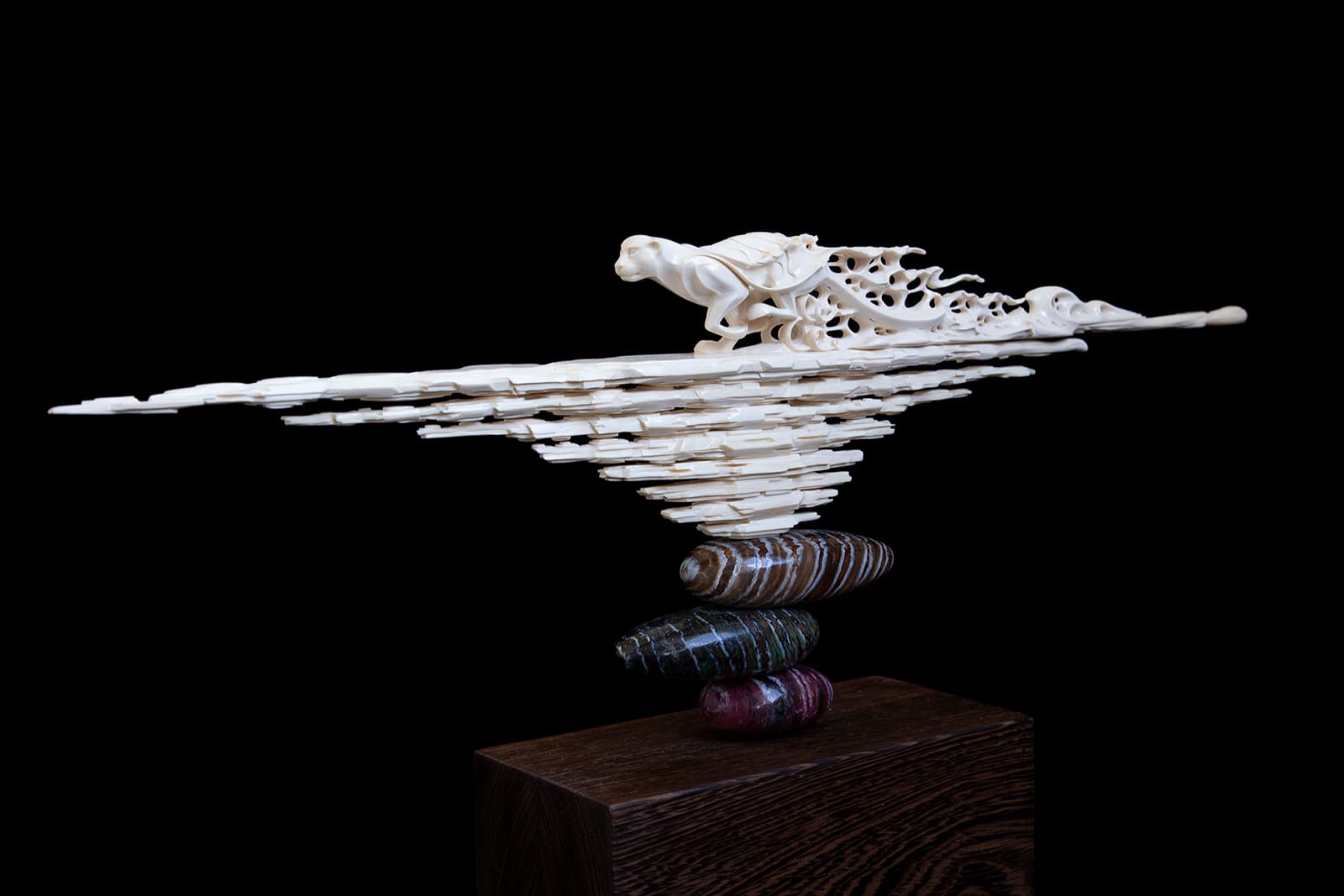 It is worth noting that in October 2019, one of the copies of the 'Transience of Time' was presented by the President of the Russian Federation – Vladimir Putin – to the Crown Prince of Saudi Arabia, Mohammed bin Salman Al Saud, during a state visit. One ought not underestimate the prestige of this work. 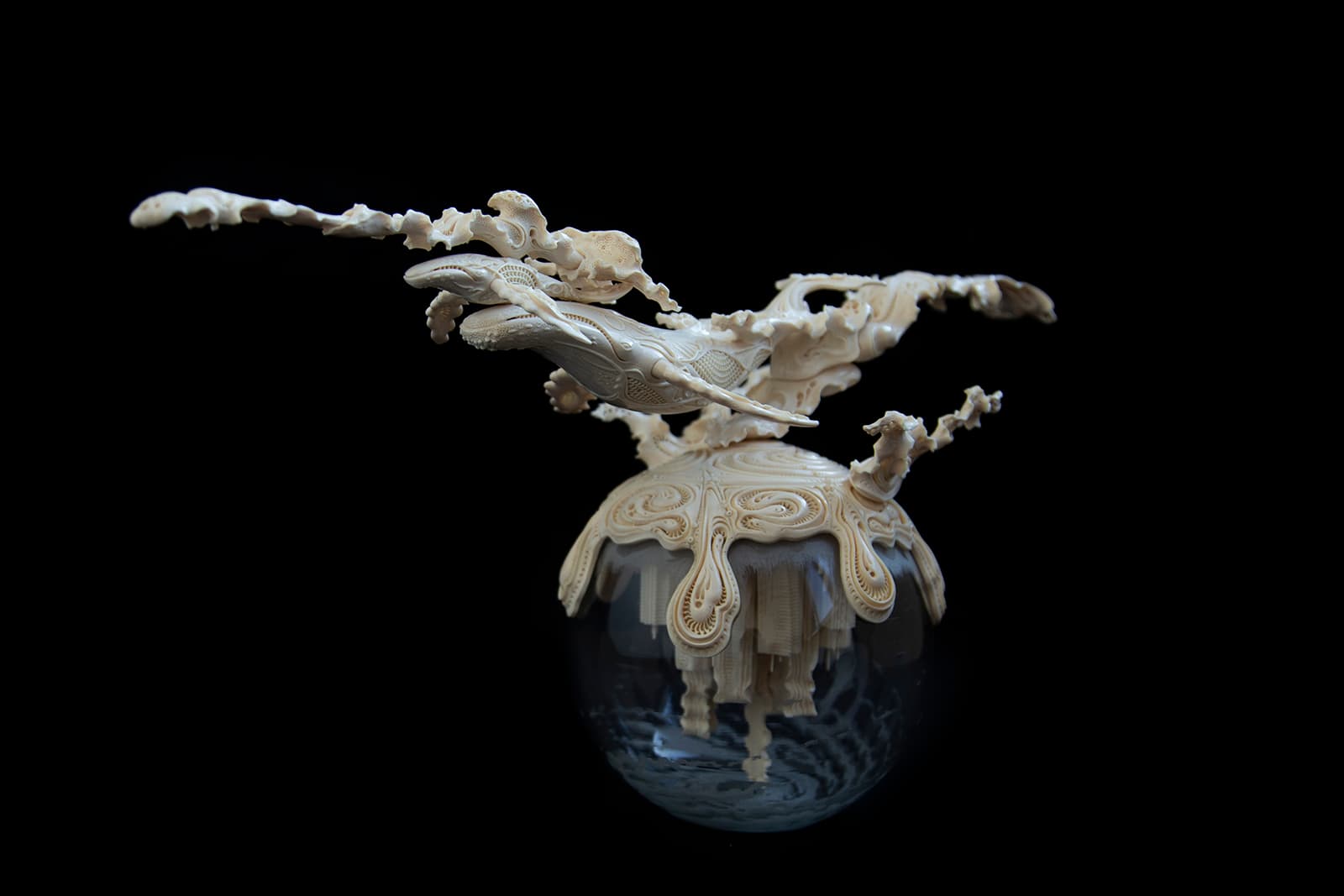 In one of my previous articles, I referred to the veil of secrecy regarding the upcoming Notivory Art piece depicting the ocean. At the Russian Antique Salon a sculpture – composed of mammoth tusk – called 'Ocean' will be on display. The work refers to the problem of water pollution – the home of the world’s vast marine life, including the behemothic whale that has captured humanity’s imagination. It is they who are depicted at the centre of the piece: a whale carefully nudges its new-born baby, and, with a graceful flap of its vast fins, the pair, like birds, soar above the bottomless abyss of the ocean. 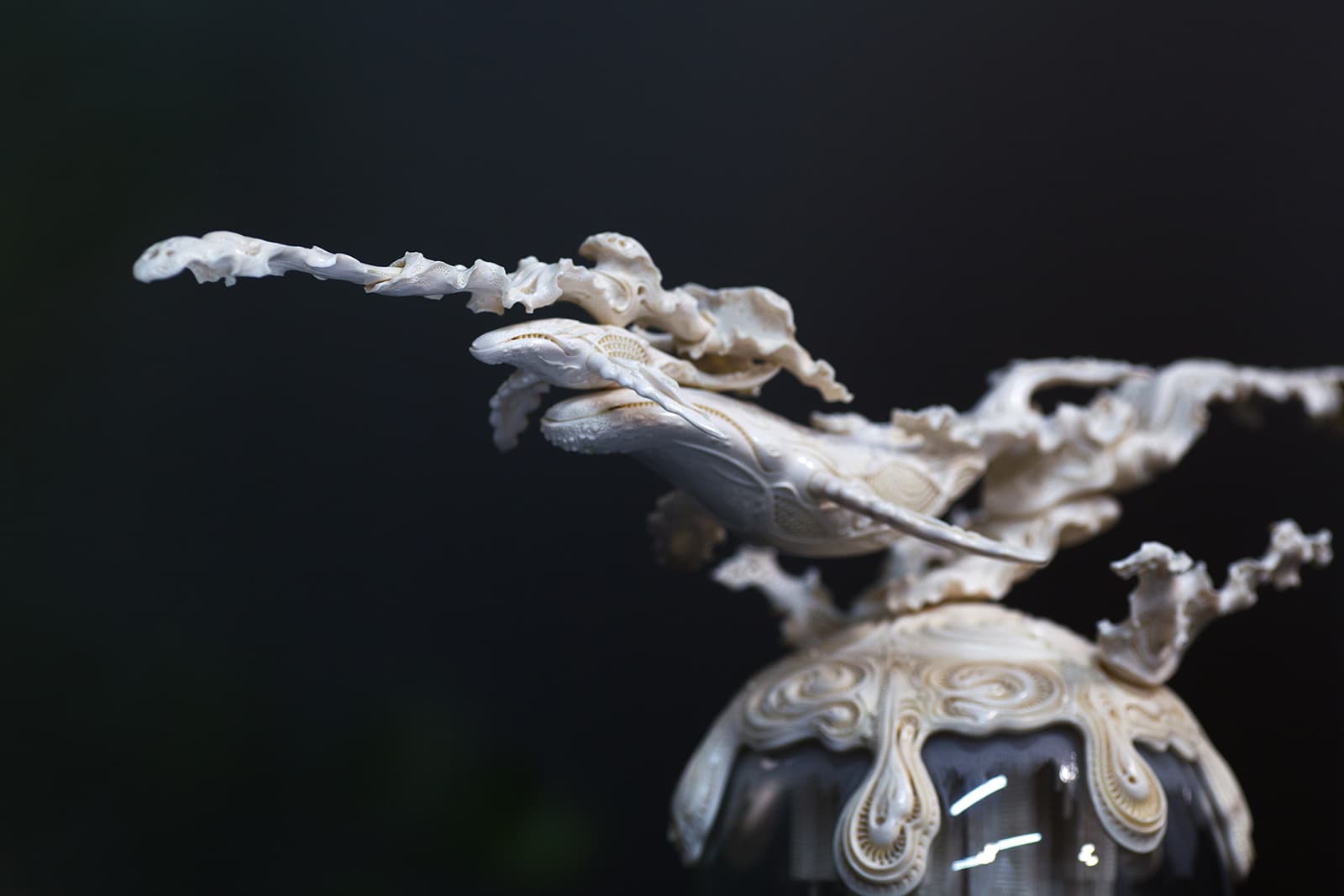 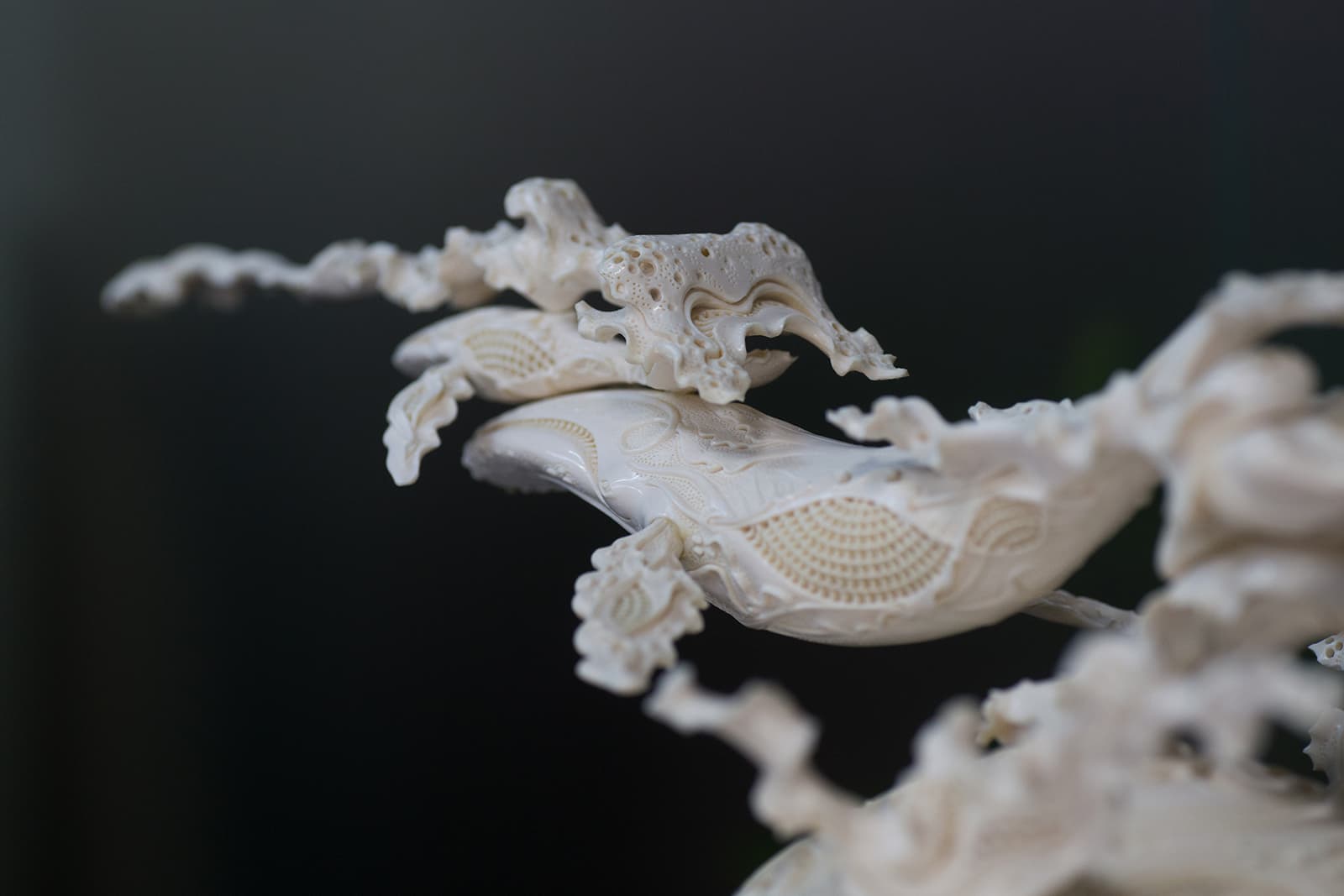 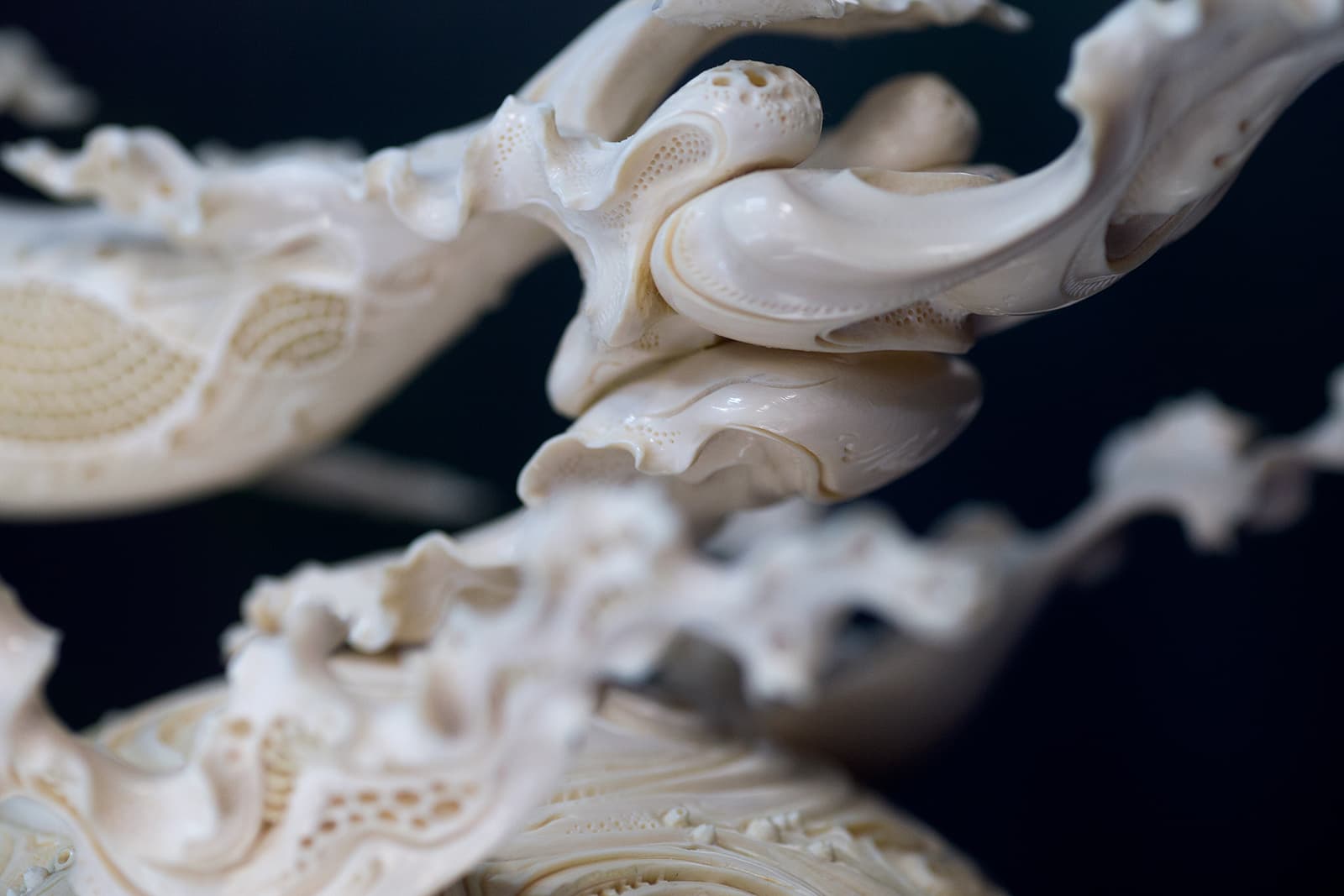 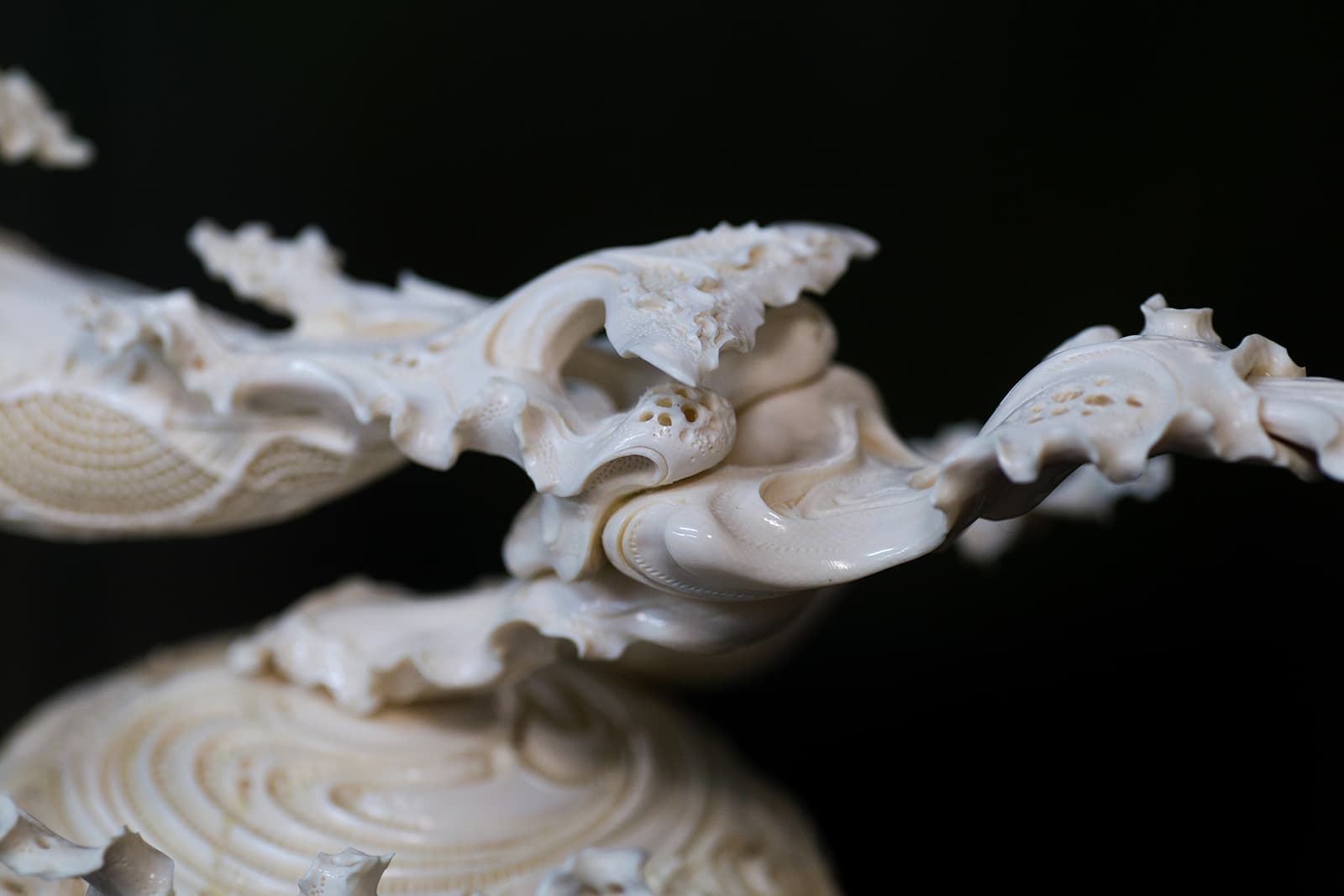 'Ocean' is designed to show the mirror of what we as humans witness – a glance at us, mankind, as seen from an oceanic perspective. The work is mounted on a pedestal in the form of a glass ball, which symbolizes both the earth and its oceans, filled with plastic. Through the glass, one can see the buildings of a metropolis – perceived from the antipodes of earth's land. Part of the proceeds from the sale of this sculpture will go to causes related to environmental protection, as is the case with all Notivory Art pieces. 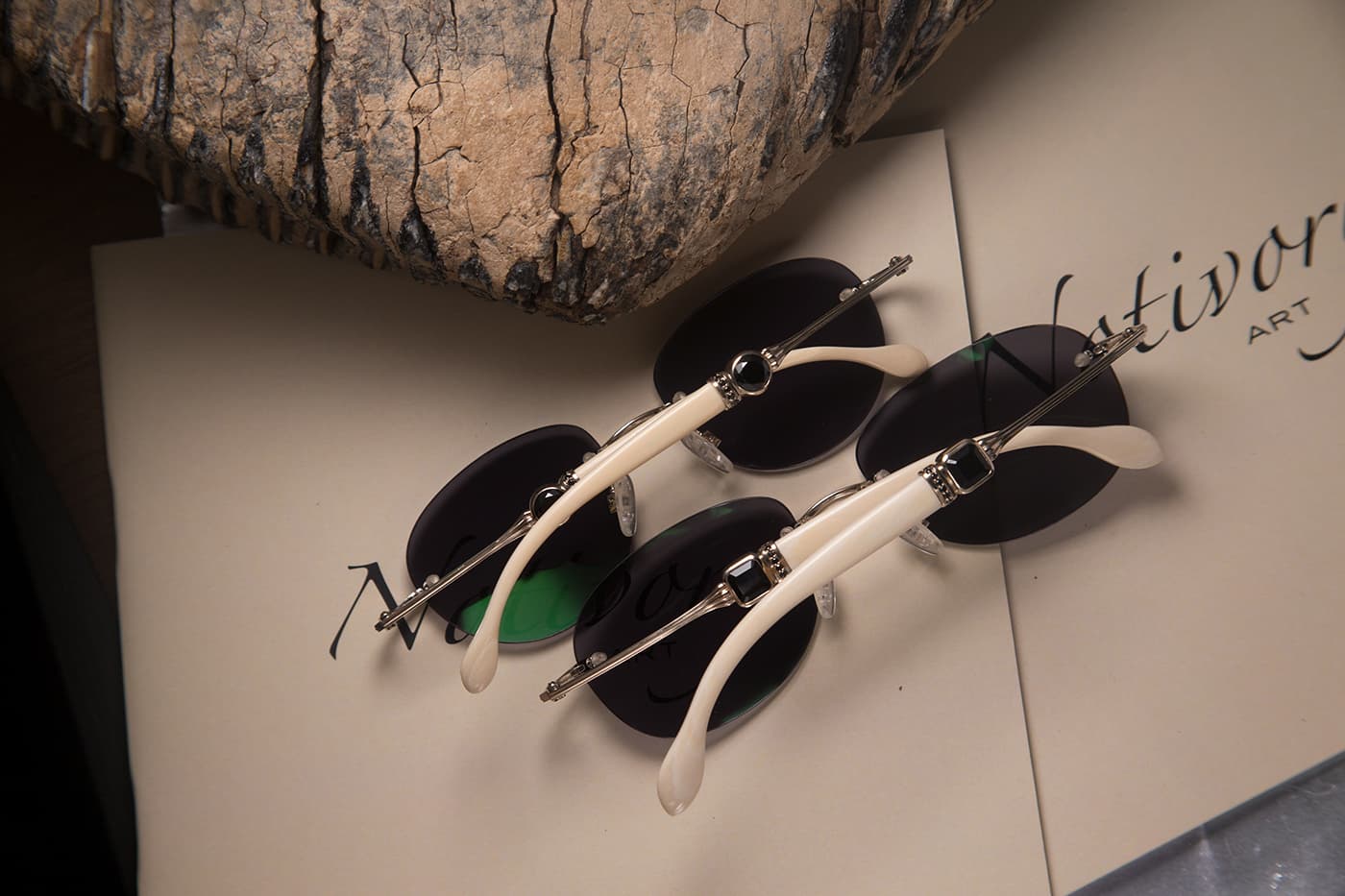 The 'Ocean' mini collection of sunglasses is based around the same theme, and consists of both men's and women's gold rimless frames that imitate the form of a squid. The earhooks are made of natural mammoth tusk with inserts of small black cubic zirconias, and the 'squid eye' is composed of black agate (on the masculine frames) or black cubic zirconia (on the feminine frames), but at the request of the client, alternative inserts of precious stones can be made. 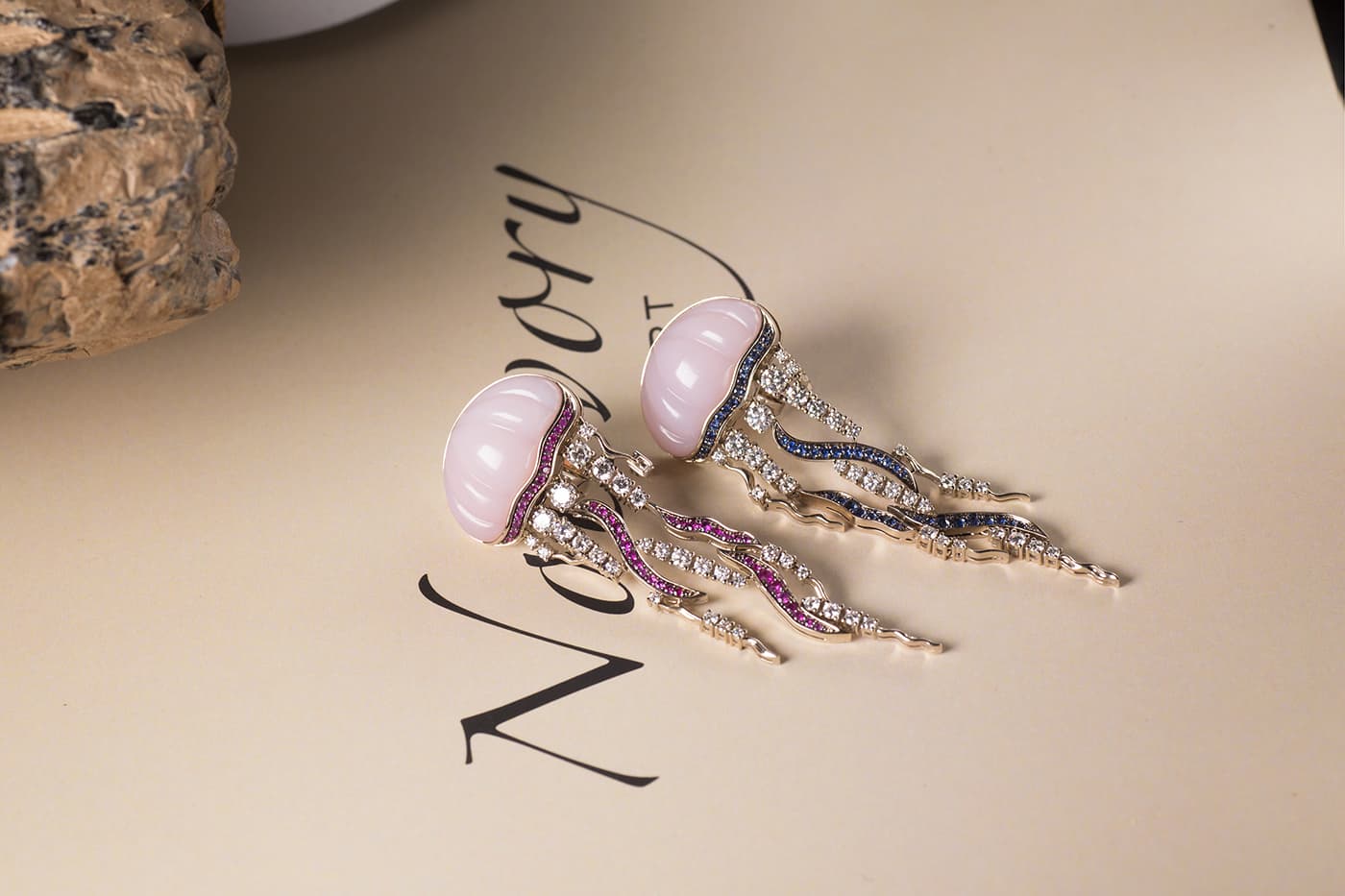 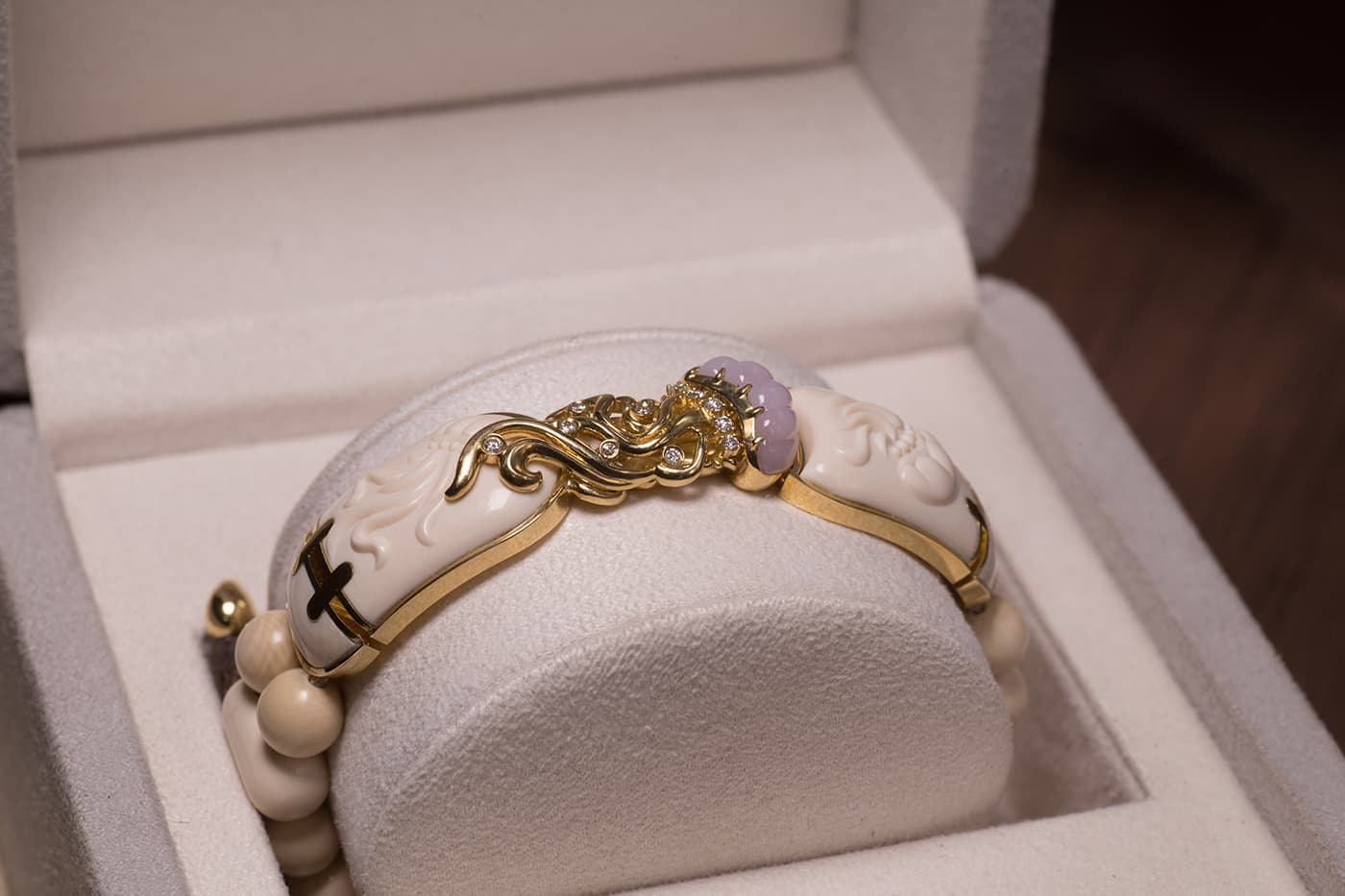 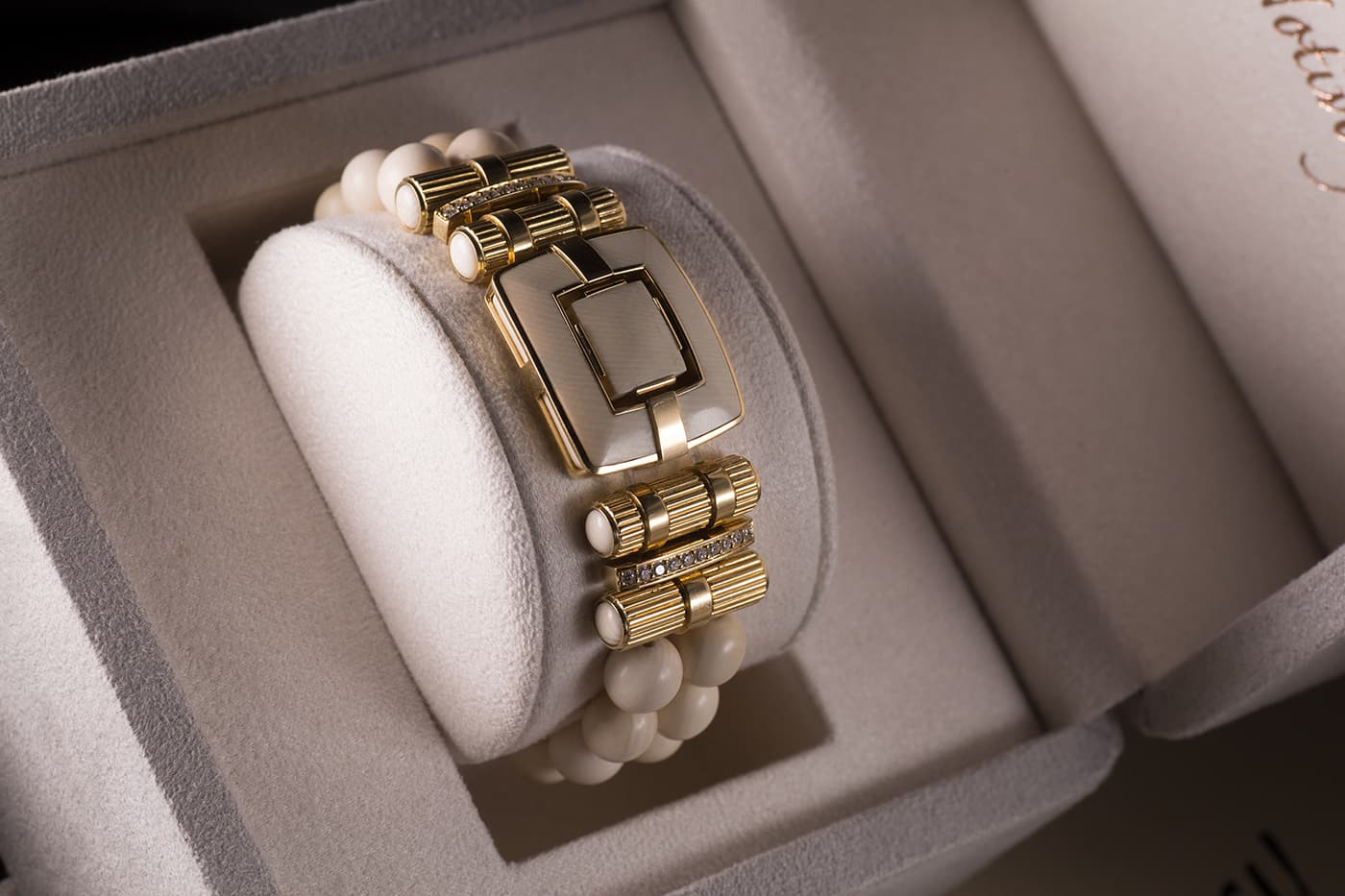 Vases from a special type of wood alongside carved mammoth ivory form the material basis for the drop-like ‘futuristic forms’, which will also be presented at the Salon. The artist’s idea is to reflect in these desktop objects the tears of marine life, locked in dolphinariums and oceanariums for the amusement of the applauding public, or dying among waters saturated with plastic pollutants. One must admit that nothing can replace the boundless expanses of the open ocean – its destruction is a tragedy. 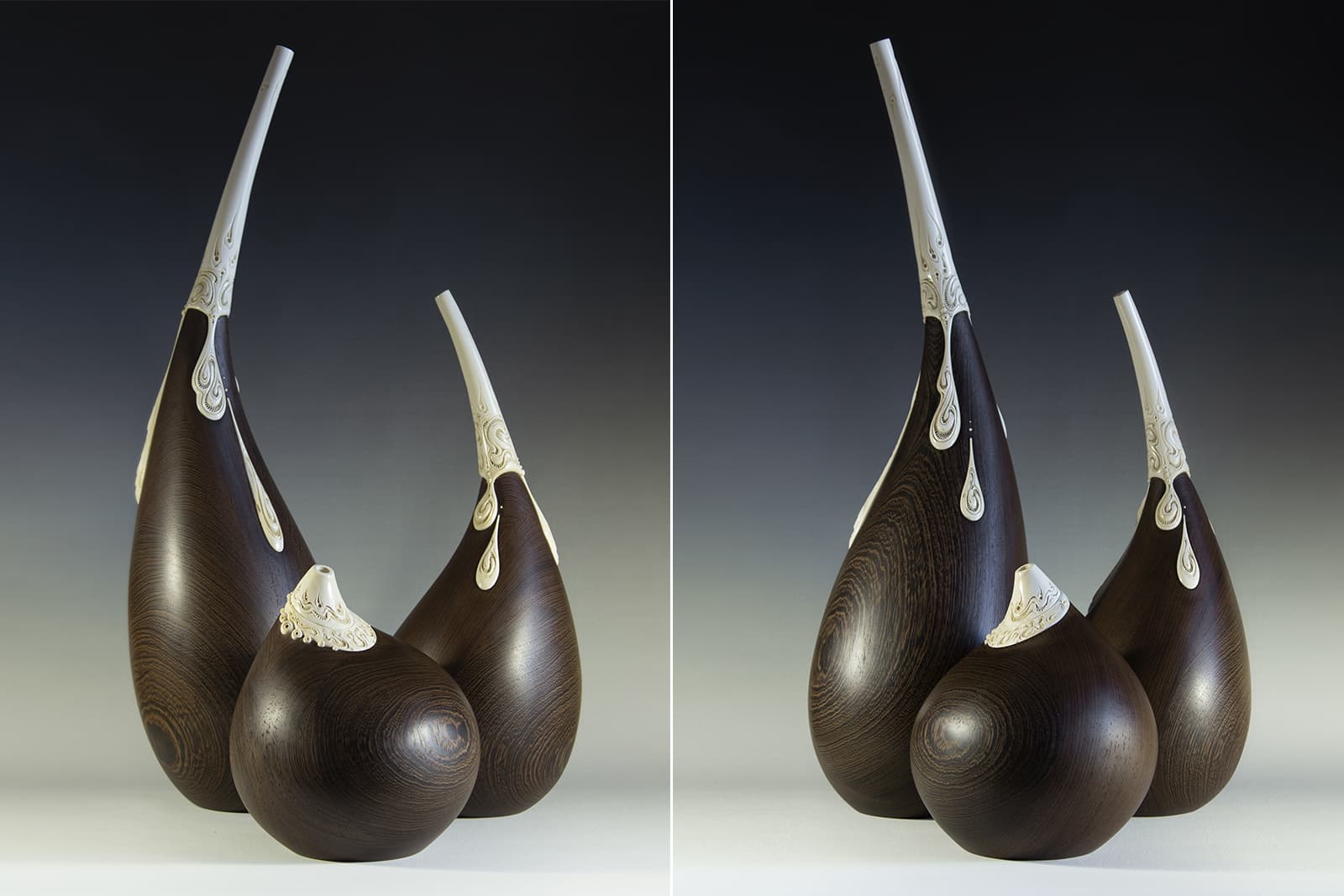 In addition to works of art, Notivory, as usual, has created several collaborative pieces of jewellery, working with a number of eminent houses. Those who are not familiar with the brand’s work will also have the opportunity to look at some of their past work – for example the 'Grace' bracelet, as well as the 'Medusa' bracelet and earrings. 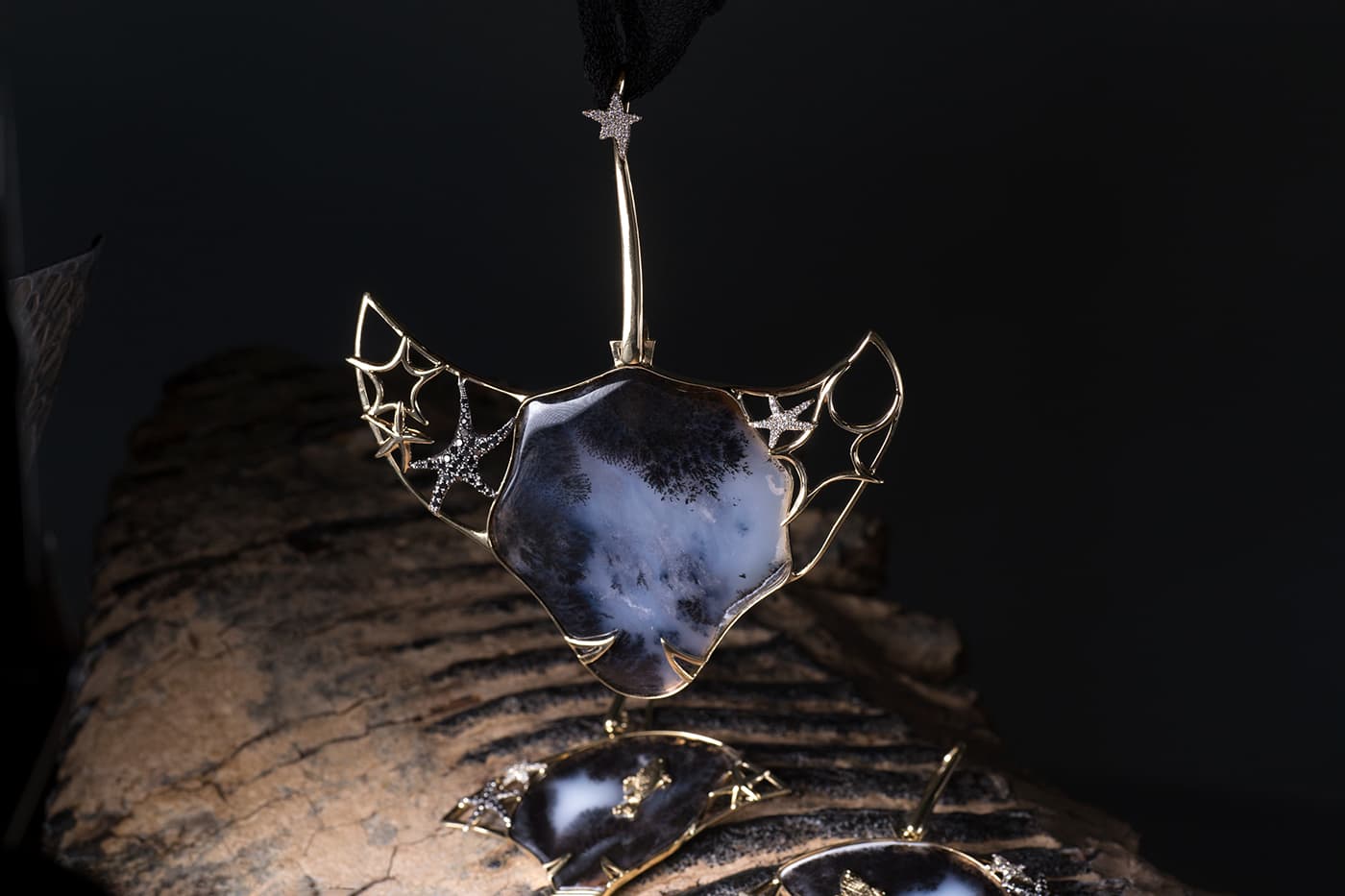 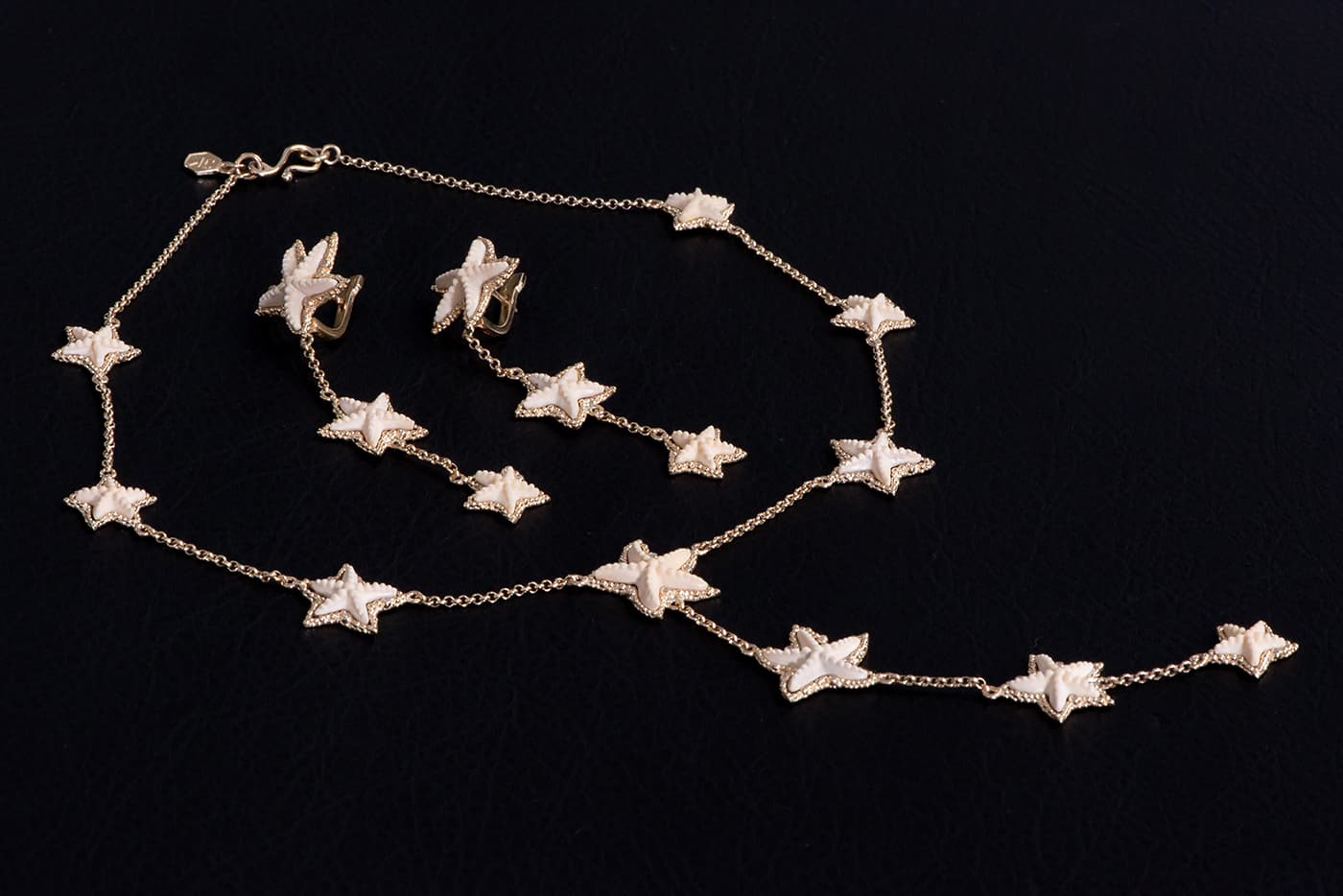 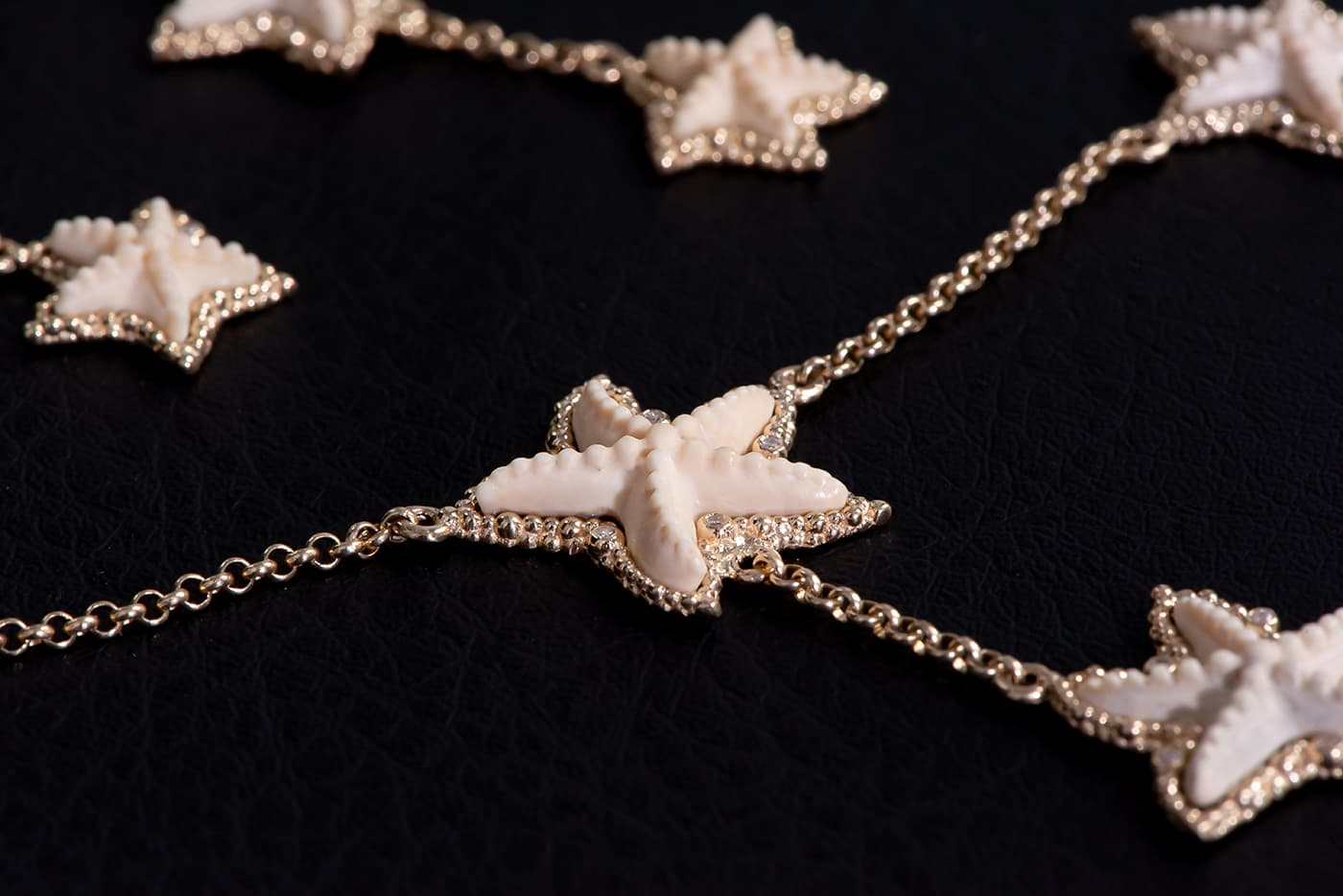 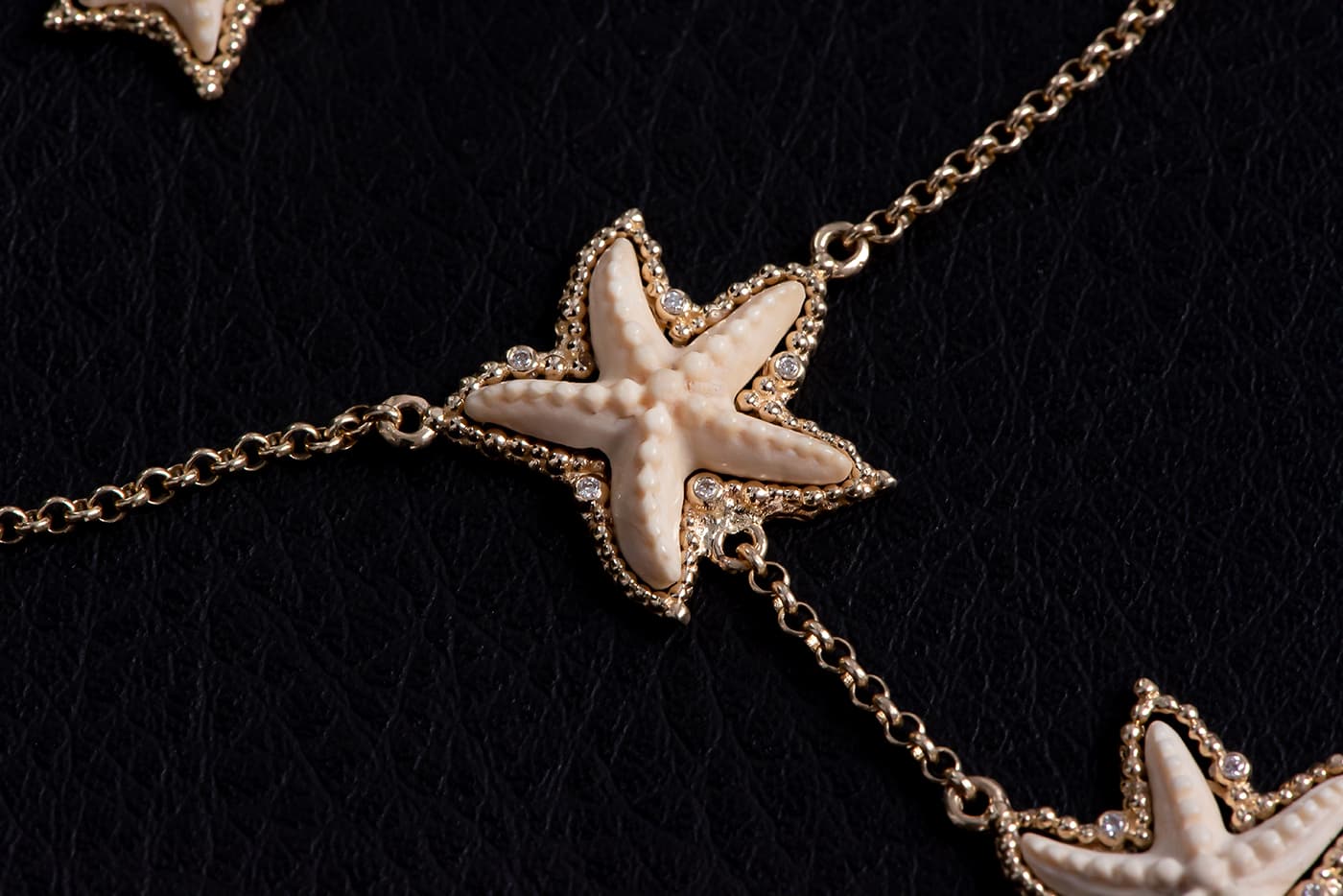 It is worth noting that in addition to preparing for the Antique Salon, the brand is actively developing a separate collection of jewellery made from gold as well as their typical mammoth tusk. The two materials will be combined in one product, making use of completely new technologies. Such techniques have never been made use of in jewellery, so whatever the result is, it will certainly be unique. Readers, if this piques your interest, we only have a few months to wait to find out more.