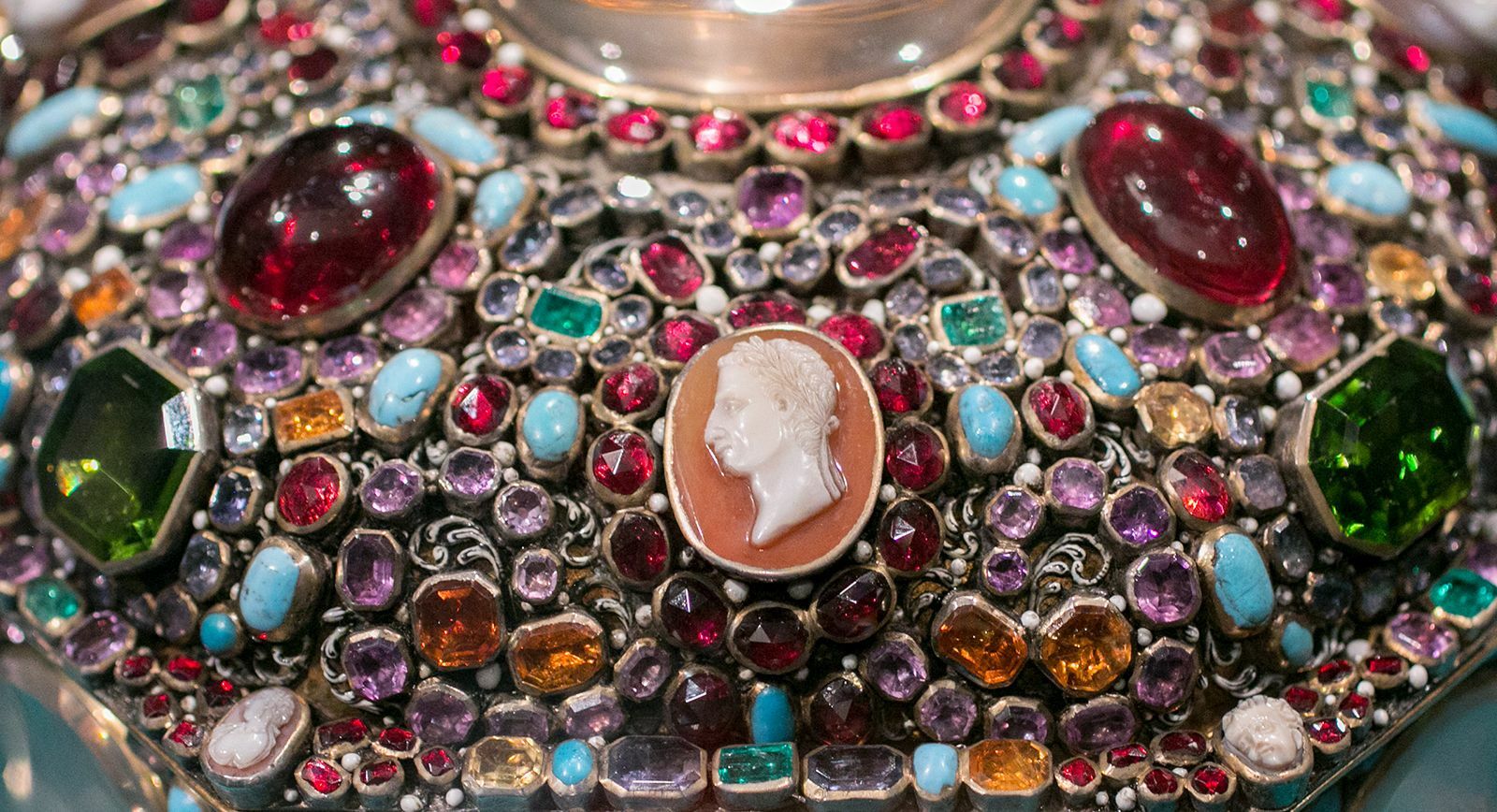 ‘Jewels!’: Over 300 pieces of historical jewellery from the St. Petersburg Hermitage are exhibited in Amsterdam

For many centuries, jewellery has been an integral part of all dinner parties, balls, and special occasions. Although time has passed, the tradition of donning one’s most valuable accessories for special occasions continues to this day. Has anything really changed? Well, the style of jewellery of course! Nowhere is this more dramatically evidenced than at the unique exhibition at the Hermitage in Amsterdam, entitled ‘Jewels!: The Splendour of the Russian court’.

The curators of the exhibition have managed to gather under one roof more than 300 works of jewellery that have adorned the necks, wrists, fingers and ears of the St. Petersburg nobility, from the late 19th and early 20th centuries. When attending high society events, empresses, princesses and noblewomen had to demonstrate their status, their “good breeding”, their refined taste and, perhaps most importantly, their individuality. This is what motivated the making of such jewellery, along with the fashioning of luxurious dresses, the cobbling of boutique shoes, the crafting of fans amidst a plethora of other accessories. All of these are present at this all encompassing exhibition. 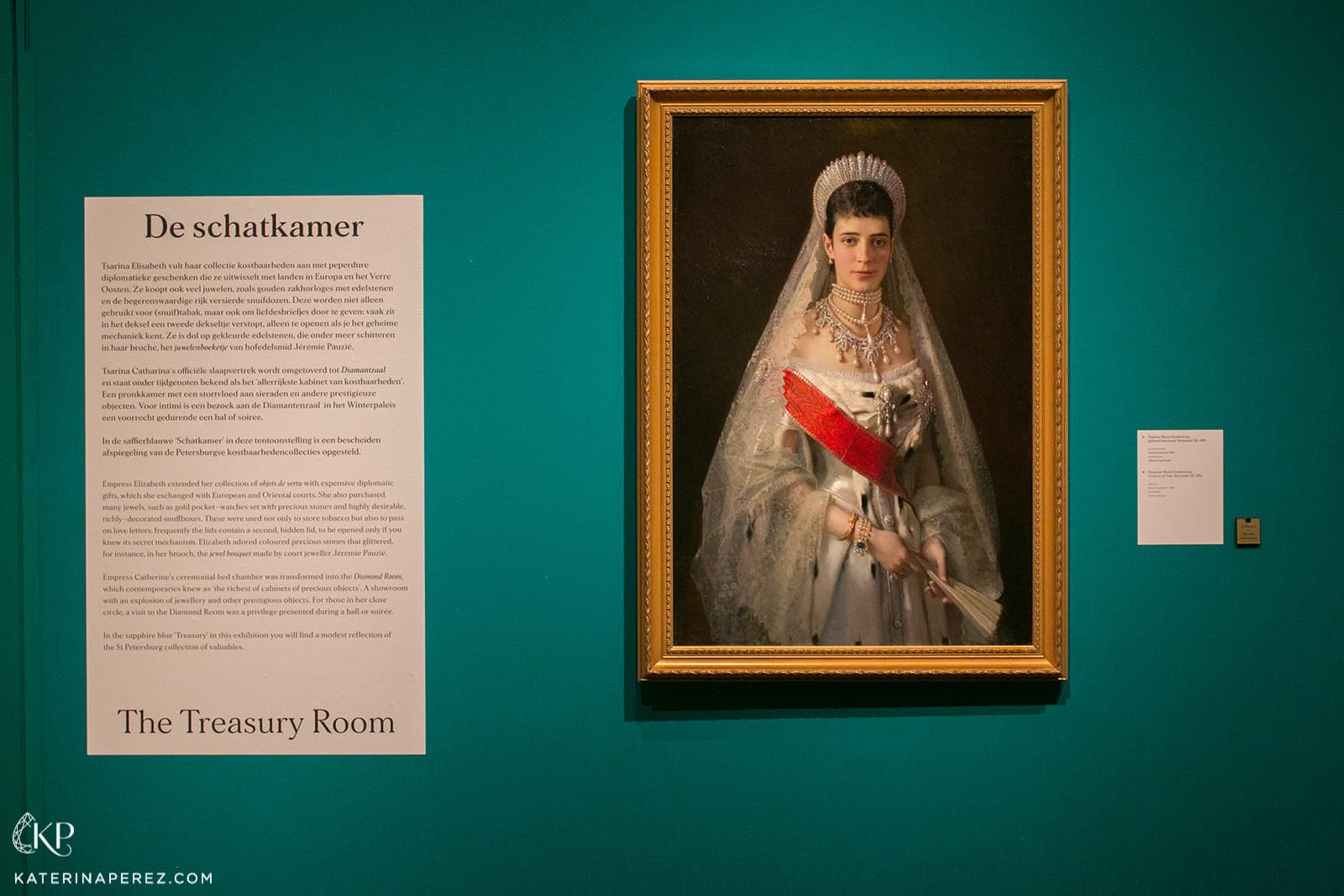 Although all of the exhibits have been brought to Amsterdam from the St. Petersburg Hermitage, most of them have never been seen in the vast Russian museum. This is exactly what makes ‘Jewels!’ such a truly unique exhibition. In order to demonstrate 300 such precious items thematically, the curators needed several rooms spread over two floors of the exhibition space. Styled by designer Carlo Wijnands, ‘Jewels!’ main hall resembles a ballroom in which portraits of members of the Romanov family, as well as those close to the royal court, are hung on the walls. It is almost as if those depicted on the canvasses watch on and admire the outfits as well as jewellery that they once shone in at the great social events of Russian high society. 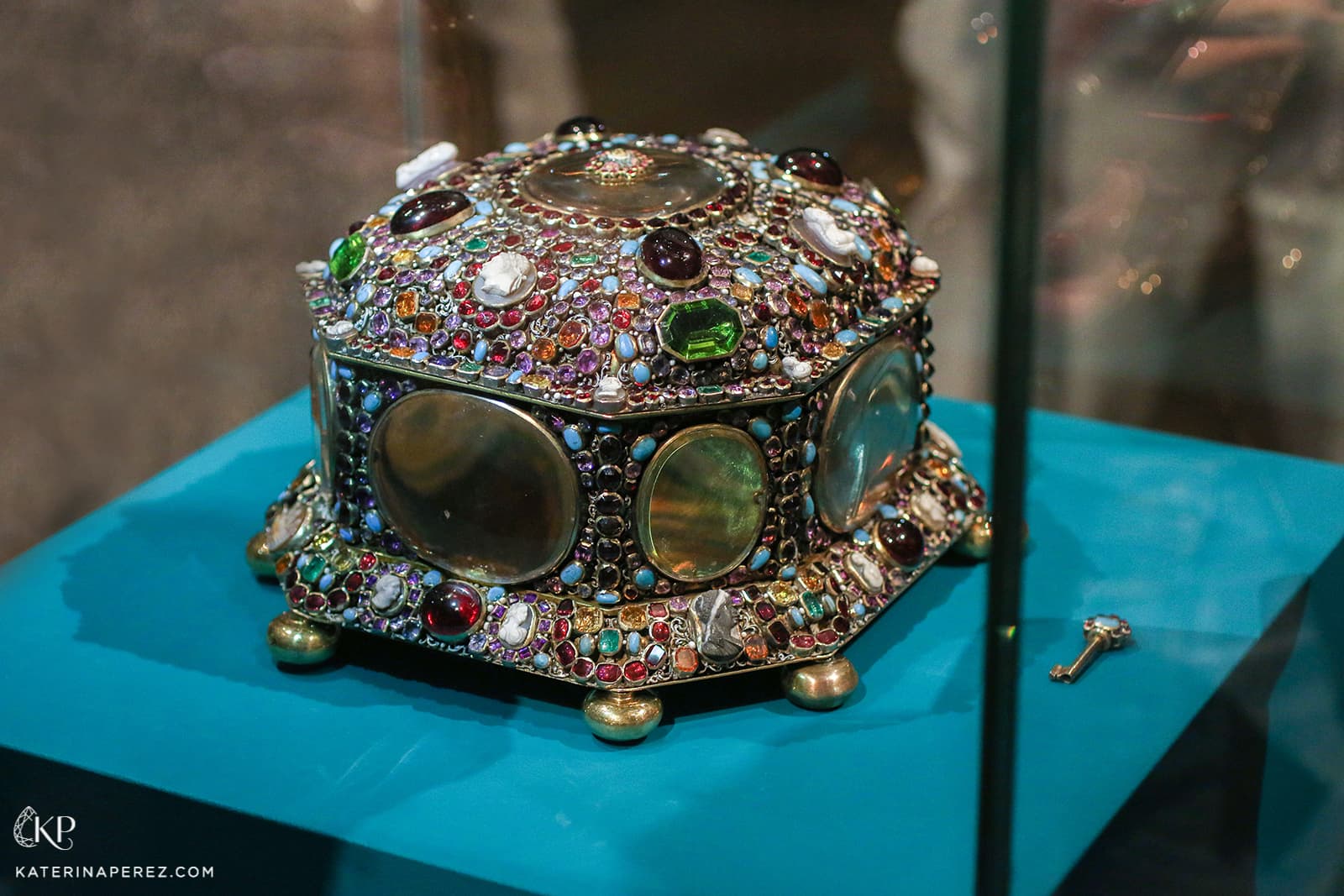 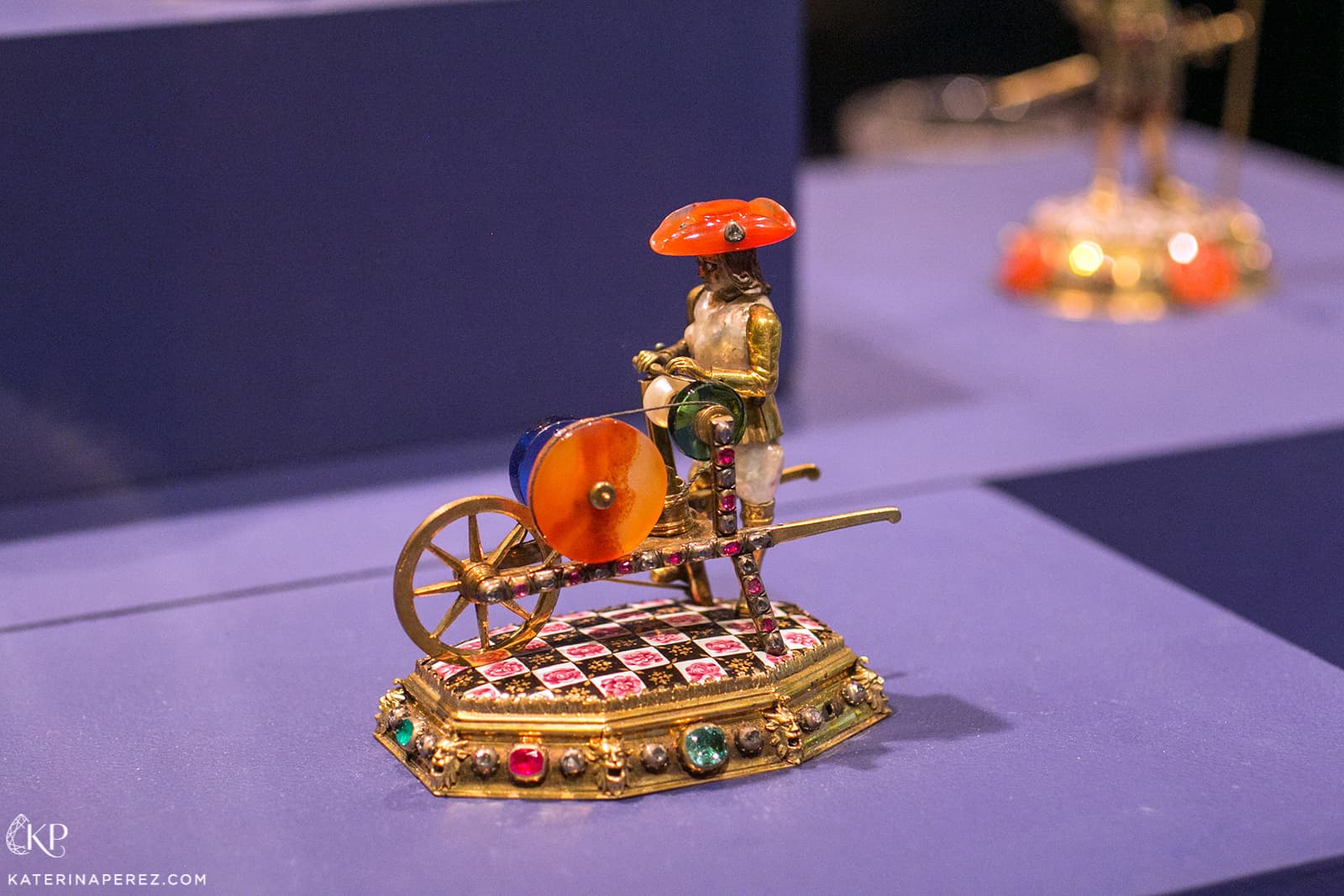 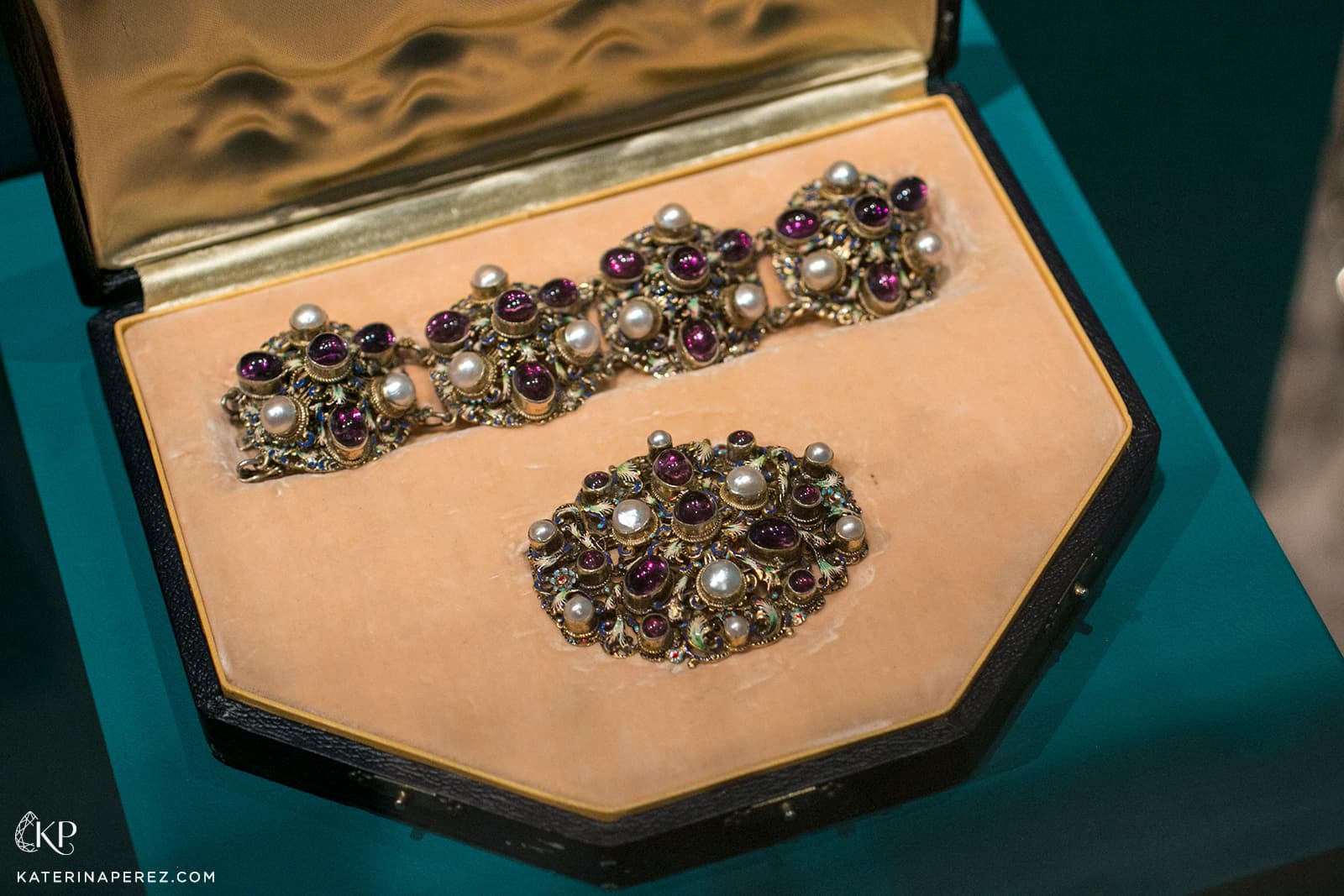 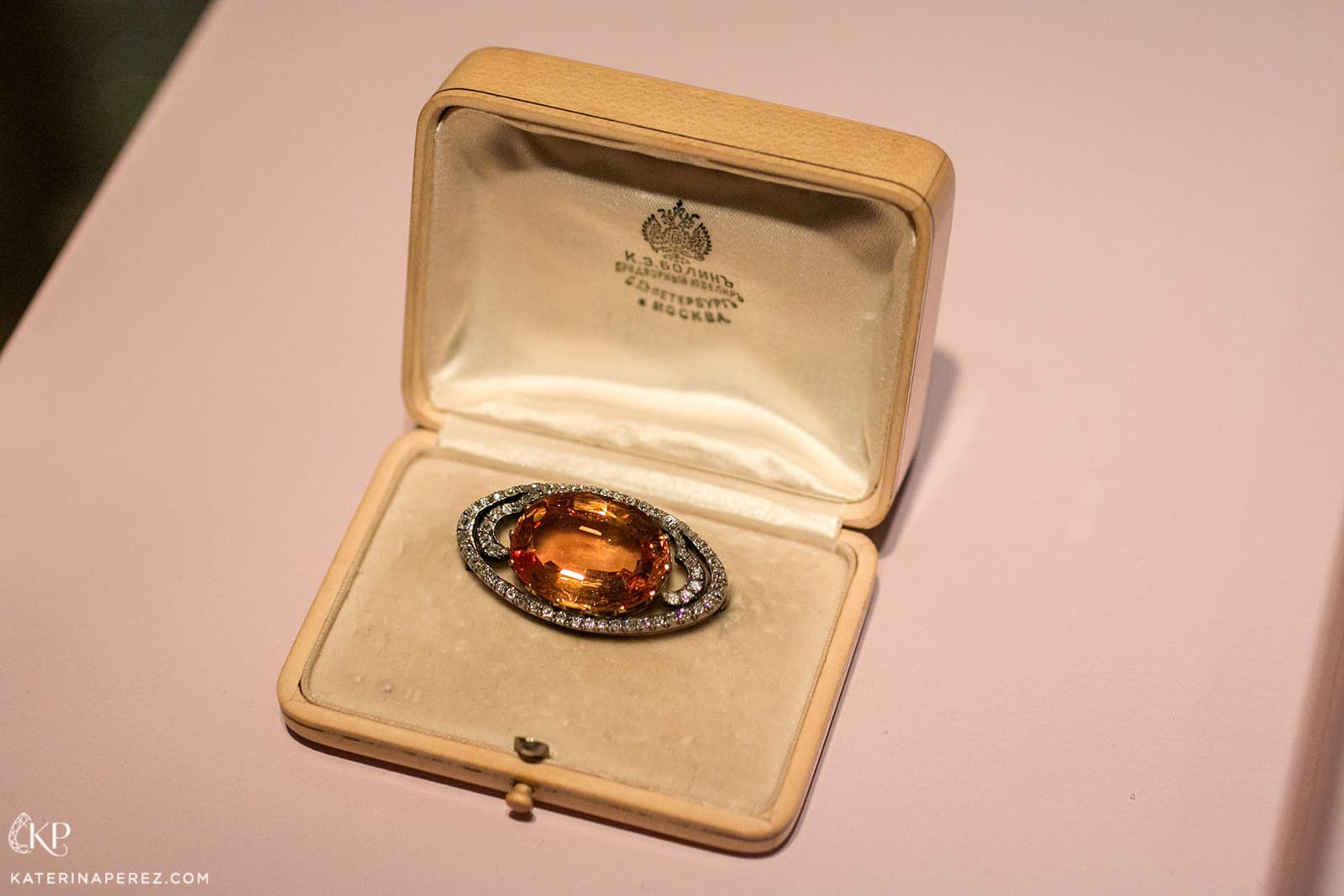 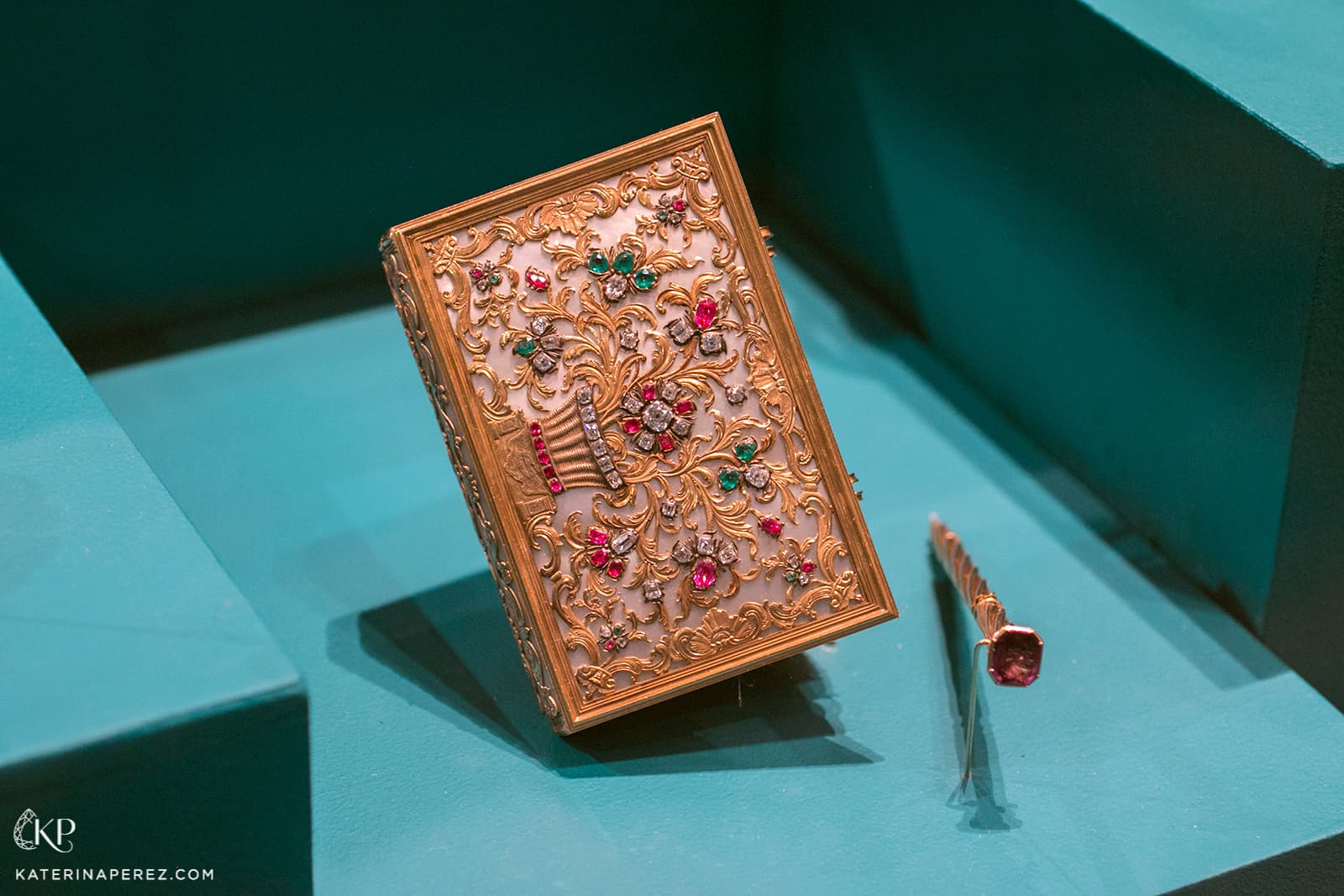 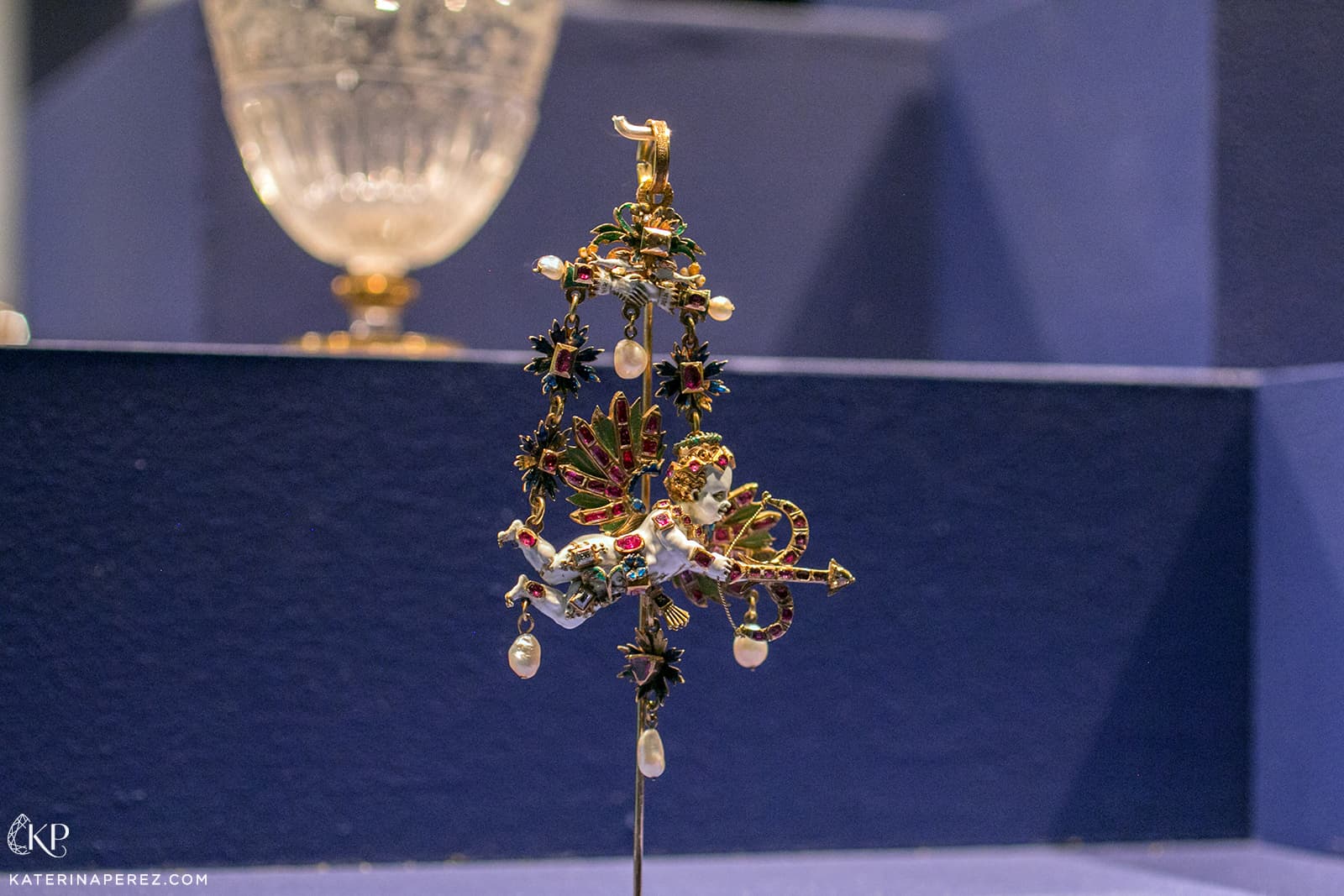 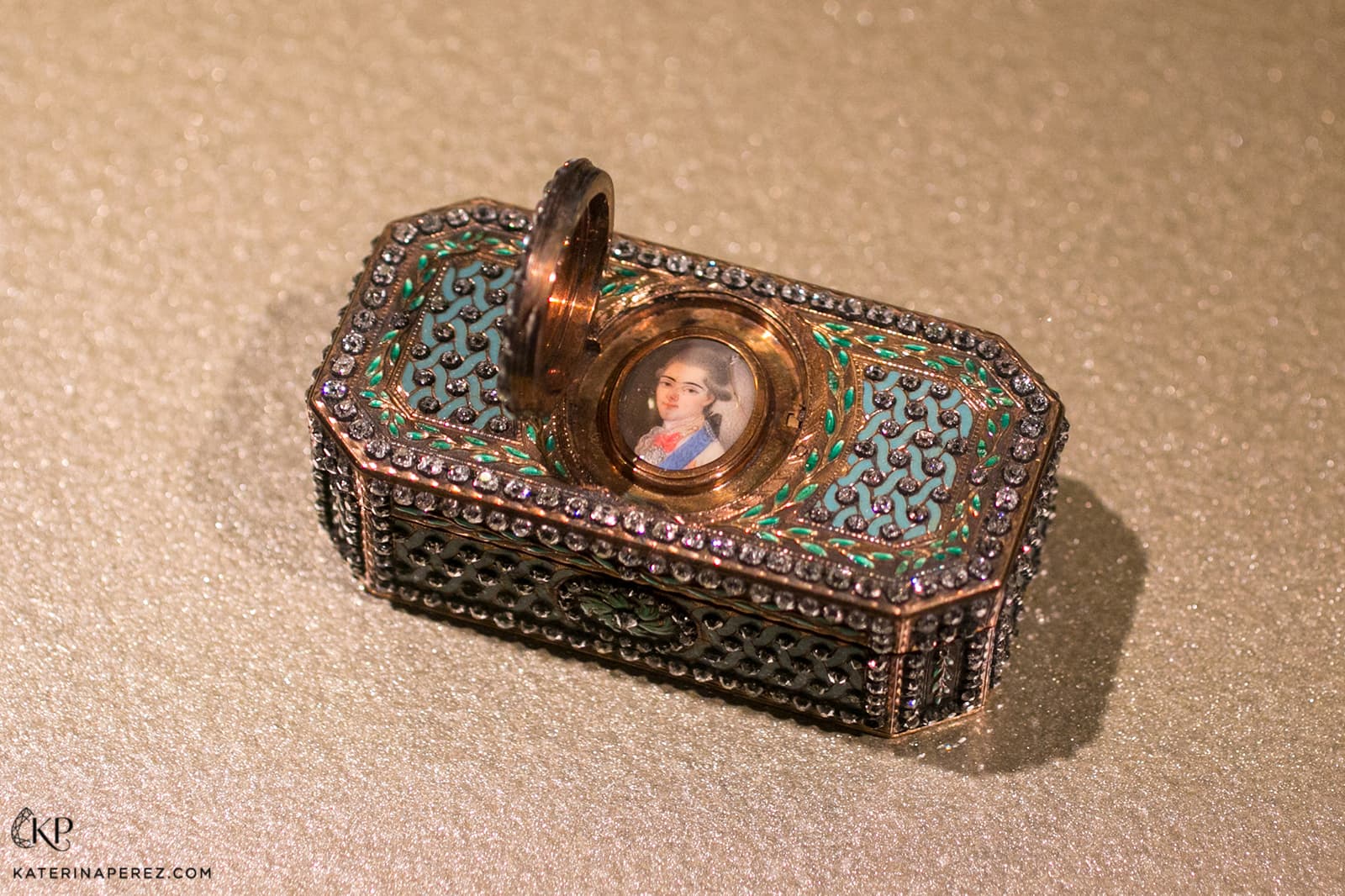 The most eye catching and perhaps also the rarest precious work on display at the exhibition is the piece that was featured on the posters advertising the event. This unique jewel is the brooch of Empress Elizabeth Petrovna, made by the court jeweller Jérémie Pauzié, that takes the form of a charming bouquet of flowers. Its peculiarity resides in its colour palette: the brooch is more vibrant than all of the other precious jewels found in the imperial collection. The flowers are made of a variety of precious stones: rubies, blue and yellow sapphires, emeralds, as well as an almost unbelievable 850 diamonds! 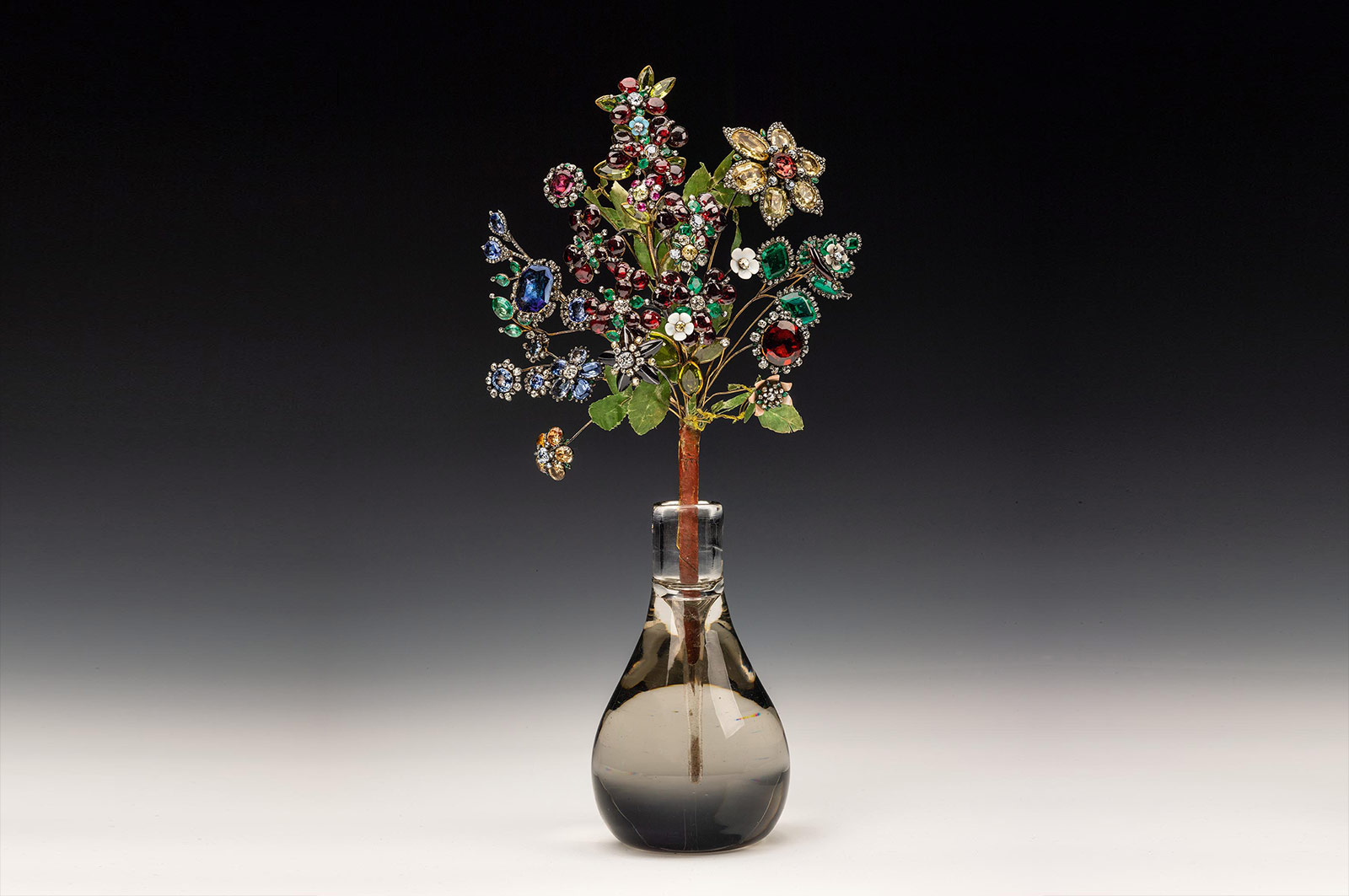 Other precious items belonging to a number of members of the imperial family are also on show at the ‘Jewels!’ exhibition. A notable example of this includes the diamond diadem which belonged to Maria Feodorovna – the wife of Tsar Alexander III. It was created circa 1880 by Mikhail Perkhin – a master jeweler who worked at Fabergé. Another item on show is a double-sided table mirror – made of gilded silver and decorated with flowers and miniature butterflies, caterpillars, snails and frogs – which was the property of Empress Catherine the Great. There are also three bracelets on show – once the possessions of the Queen of the Netherlands and Grand Duchess of Luxembourg Anna Pavlovna – one with a portrait of her husband Willem II, and two others with the couple’s initials. 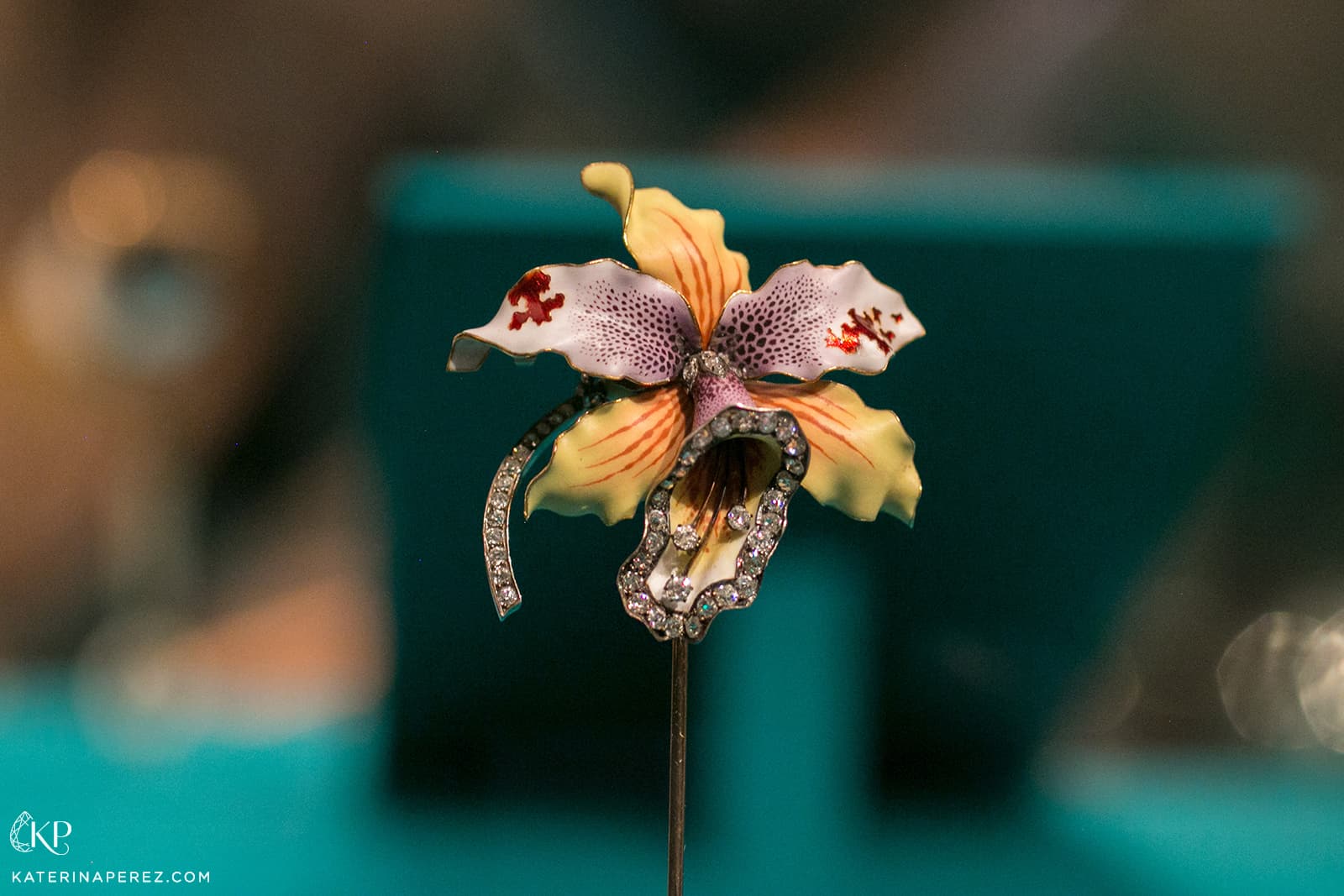 I was pleasantly surprised by the sheer stylistic variety of the jewellery that the curators had chosen to present at the exhibition. In the windows, one could see Rococo jewellery, as well as Imperial, Art Nouveau and Romantic era work. In addition to court jewellers or unknown creators, one can see work by such eminent houses as Cartier, Lalique, Tiffany & Co and of course Fabergé. It is also worth noting that the jewels at the exhibition were not only embellished with diamonds, but with a wide variety of precious stones: rubies, sapphires, emeralds, pearls, agate, rock crystal, garnets, tiger's eye, amethysts and turquoise. 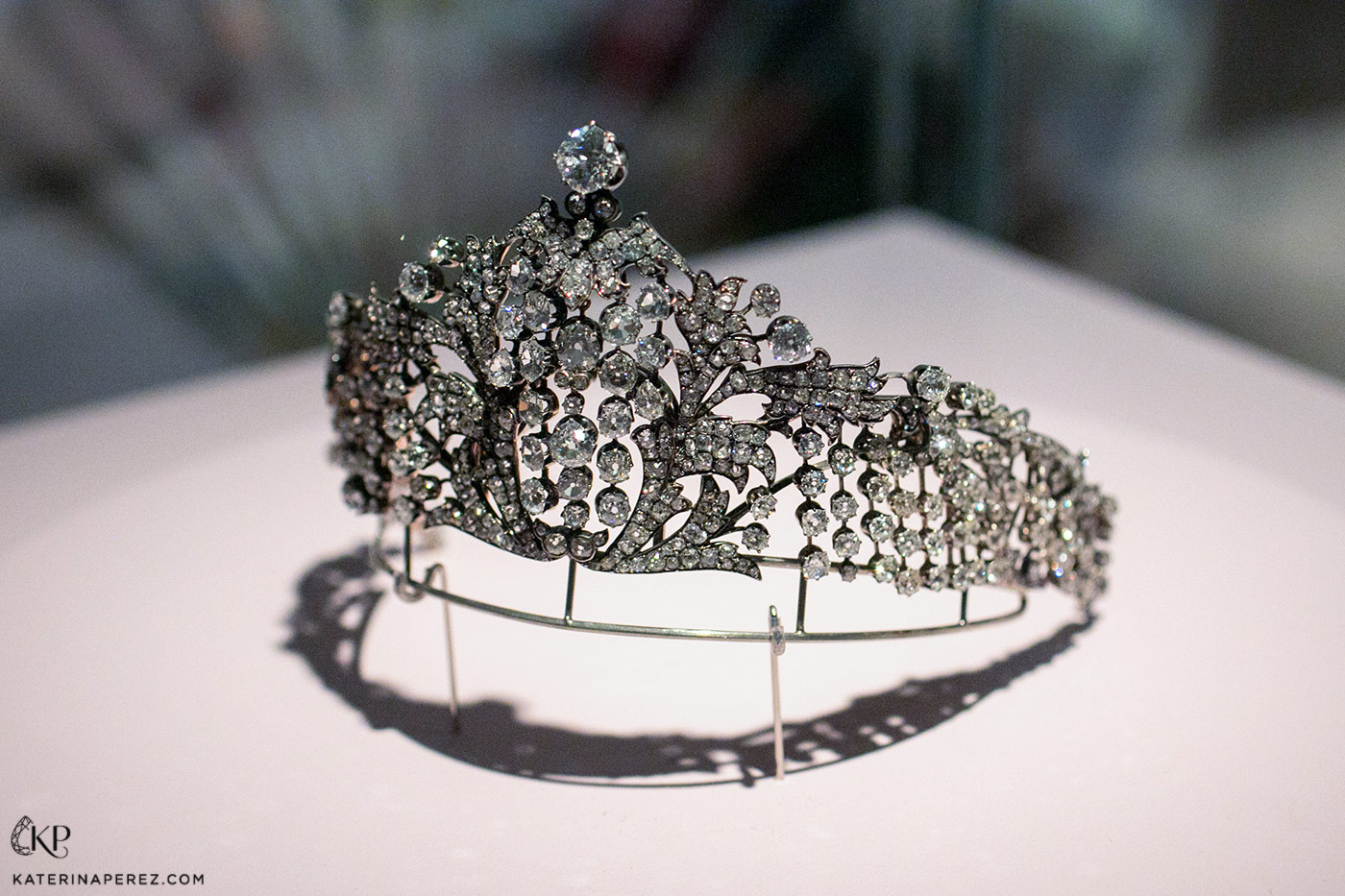 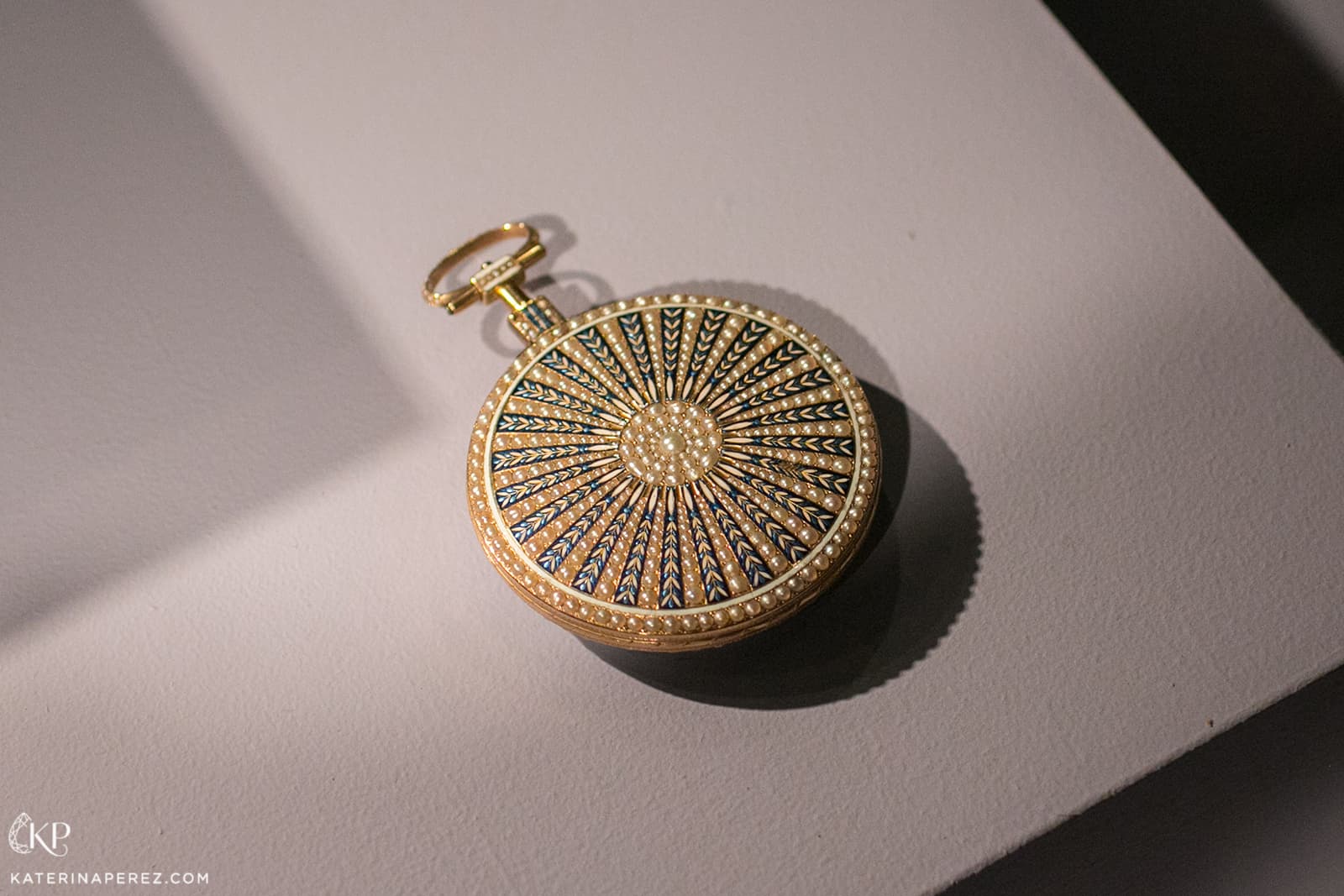 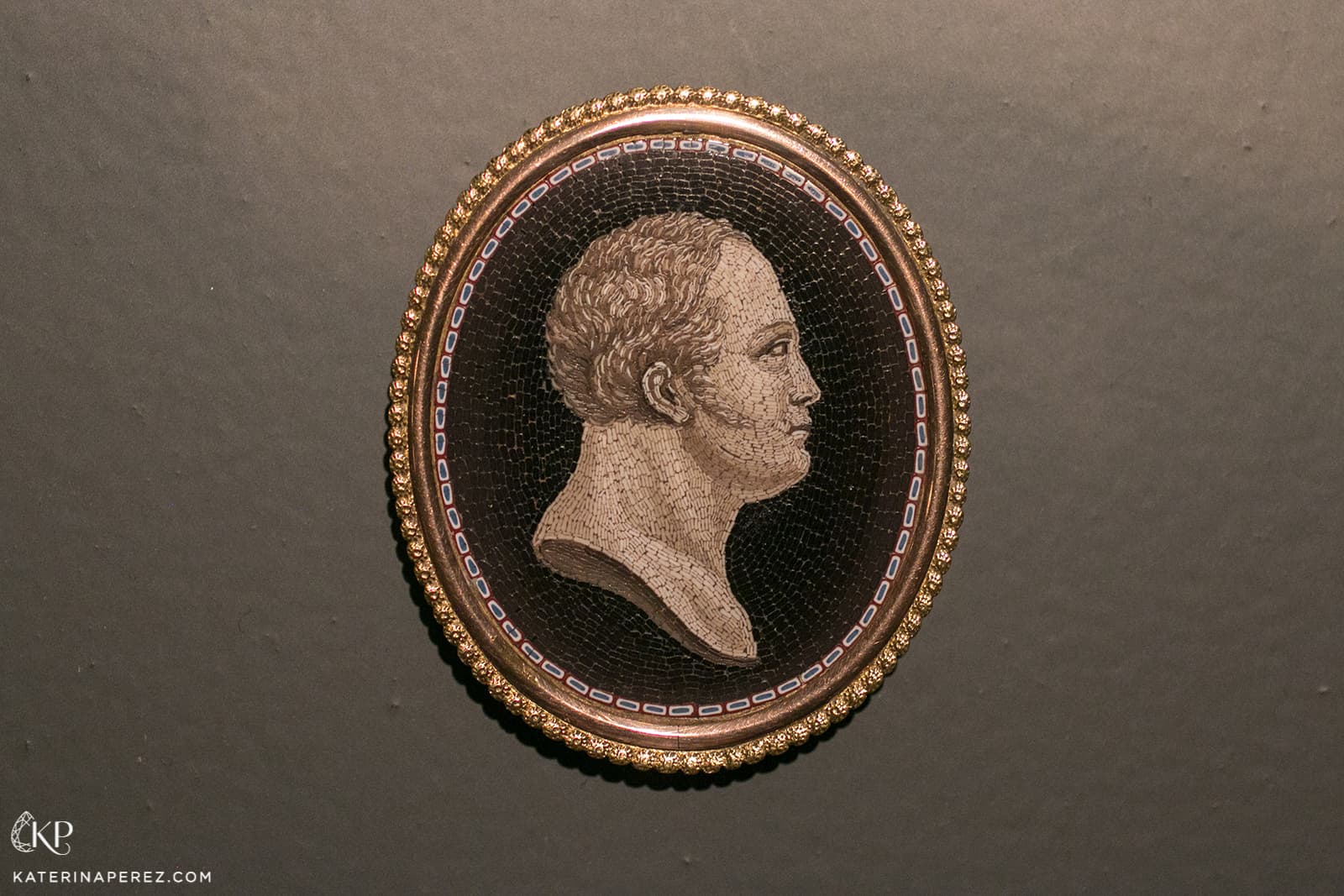 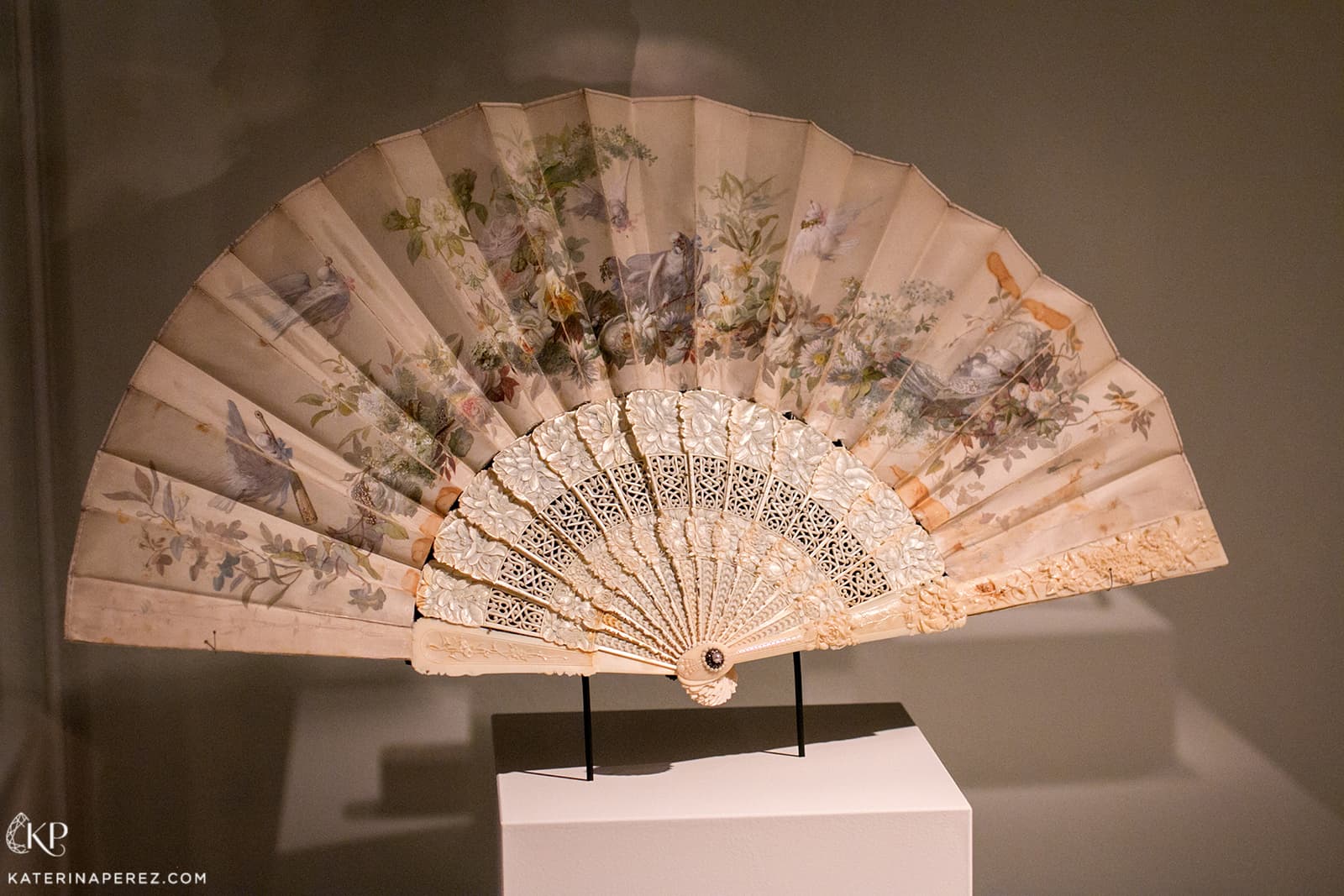 I am especially intrigued by the jewellery and precious objects that hold a symbolic meaning that is associated with the extremities of human emotion, from passionate love to the desire for murderous vengeance. For example, in the 18th century, snuff-boxes were very popular, and were often used as a means to pass love notes, with secret messages communicated in compartments that, upon first glance, appear invisible. In some of the pendants worn by the women of the court, we find portraits of their loved ones, or a lock of their hair. In the canes carried by the men, one might find a watch, a telescope or a snuff-box, or, more morbidly, sometimes a hiding place for poison can be found in the opening rings. 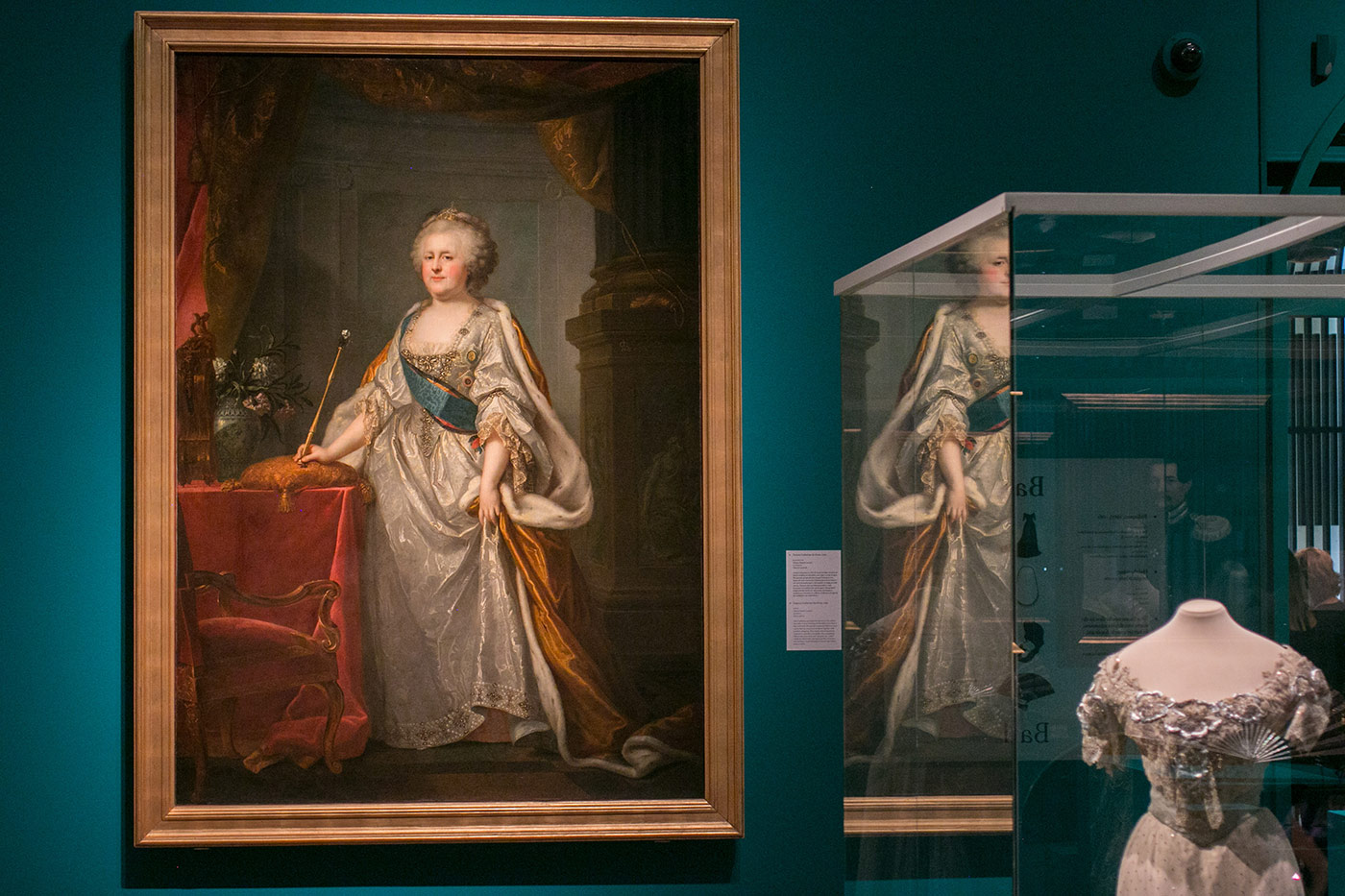 During preparation for the exhibition, three designers from Amsterdam visited the Winter Palace in St. Petersburg to be the first to see some of the future exhibits. Among them was the sculptor-jeweller Bibi Van Der Velden, whose work completes ‘Jewels!’exhibition. Bibi created a one-of-a-kind cocktail ring especially for ‘Jewels!’ entitled ‘The Memento Mori’, which is made in the form of a large withering tulip bud. It is decorated with miniature insects made of gold and precious stones, as well as rubies, emeralds, crimson sapphires and colourless diamonds. An egg made from 60,000-year-old mammoth tusk is nestled in the very centre of the ring, and the whole composition becomes an abstract rendering of the life of the Romanov family. 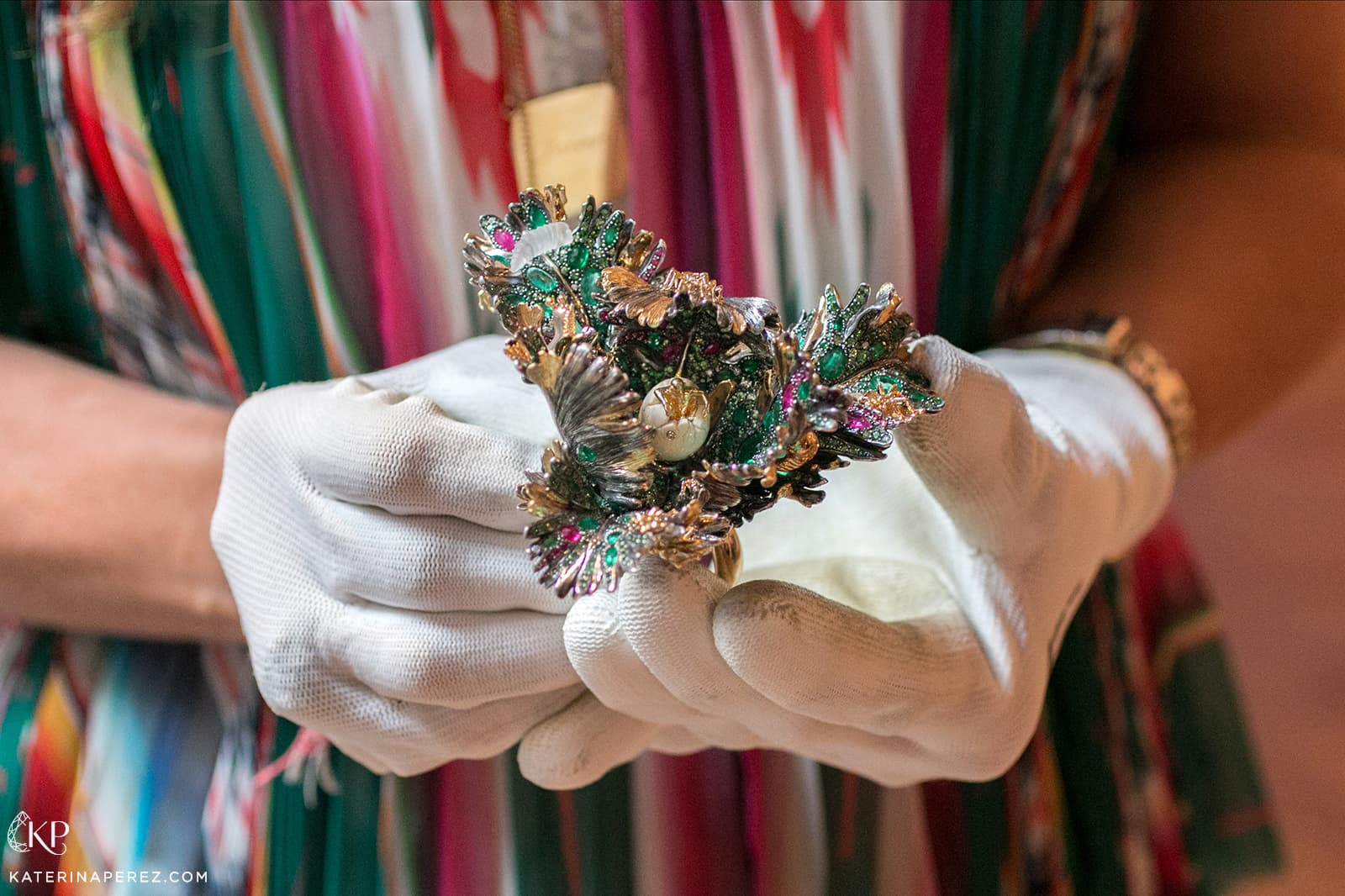 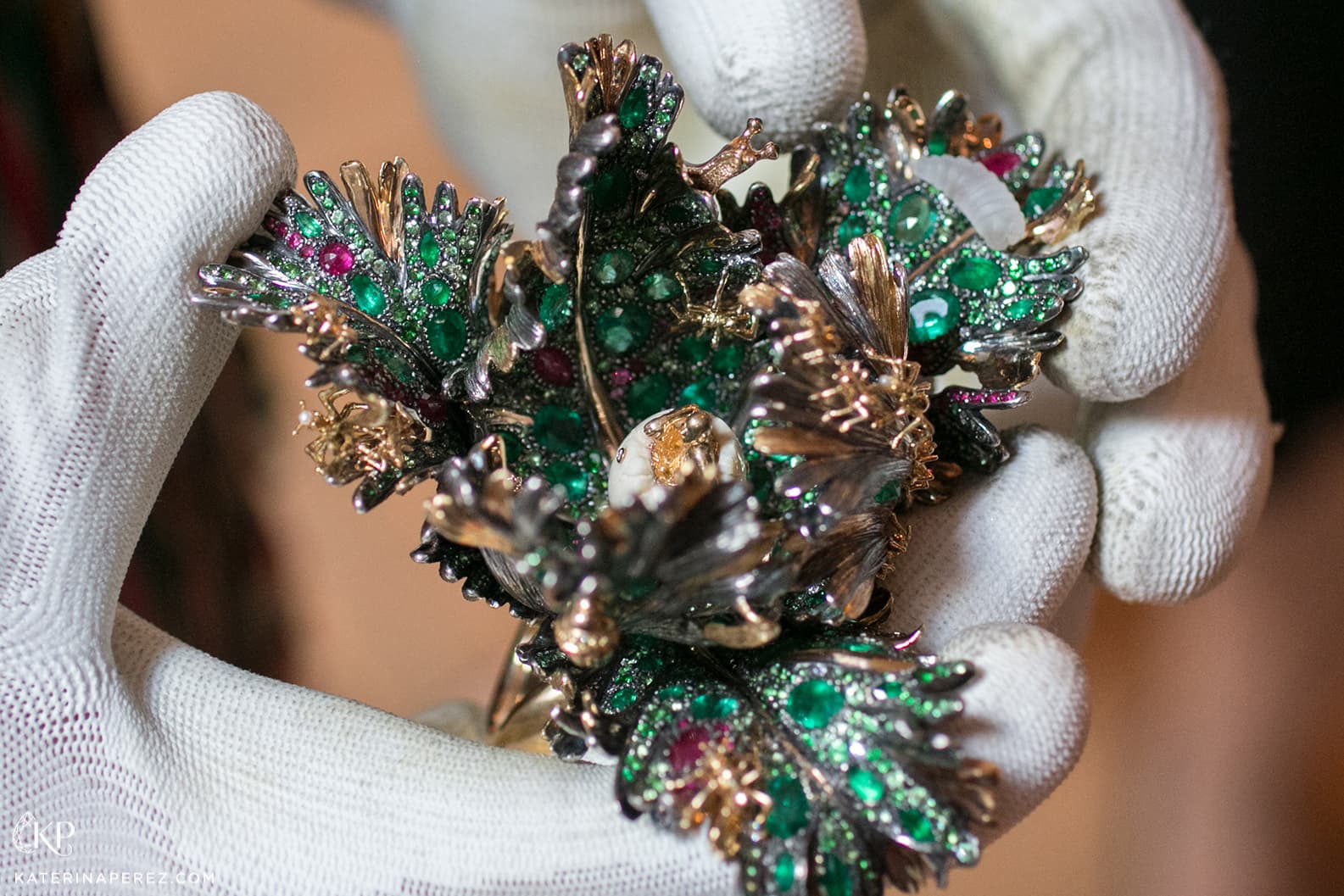 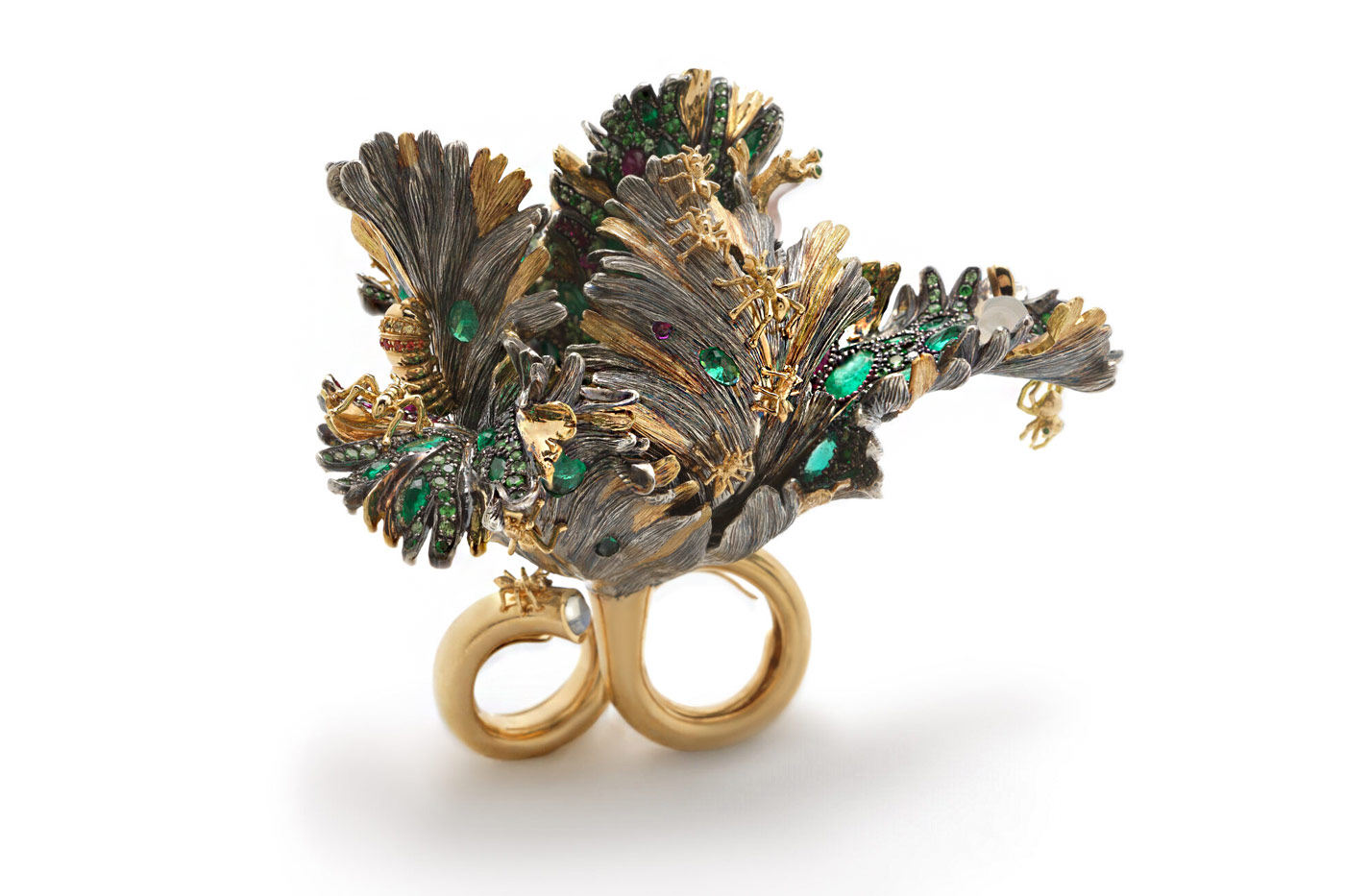 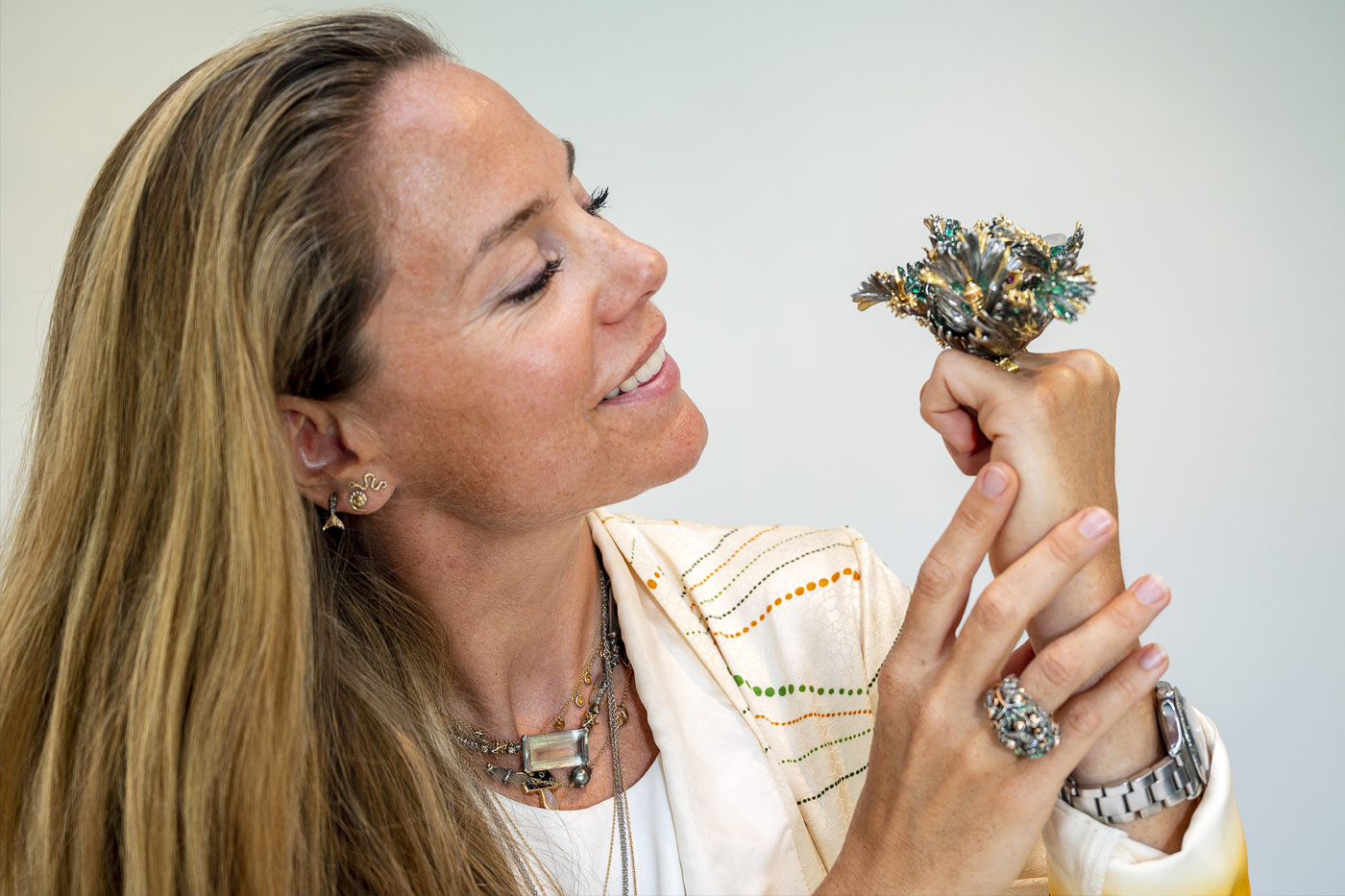 I will finish my overview of the exhibition by advising you to book your trip to Amsterdam, it will be worth it! What is more, there is no real rush, as the exhibition will last until March 15th 2020.