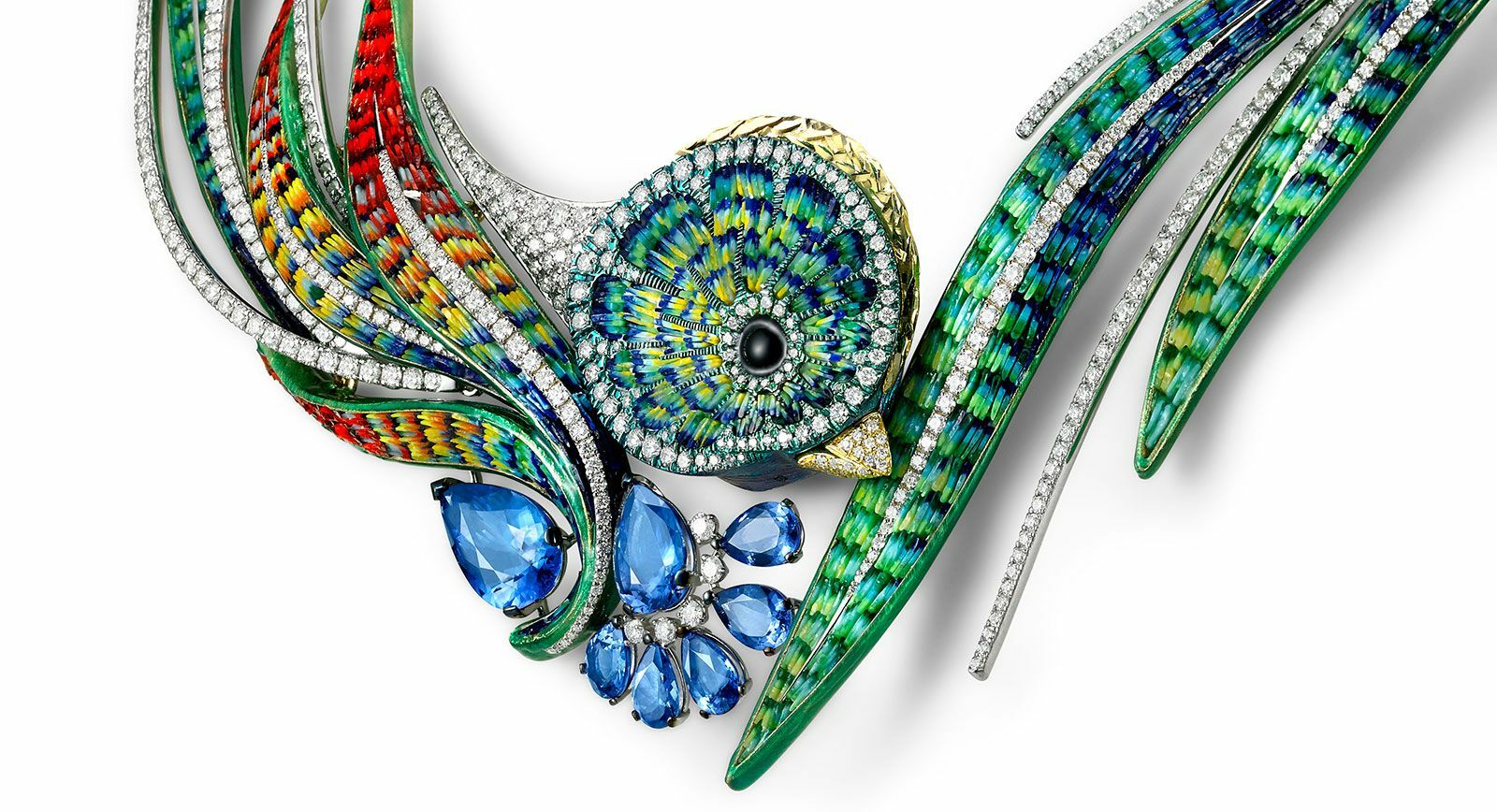 The Quetzal Necklace: a Continuation of the Eponymous Surreal Jewellery Line From Sicis

Worshipped in ancient times as the “god of the air”, the quetzal is a small but incredibly beautiful bird, the national bird of Guatemala and a national symbol of freedom. This marvellous bird boasts resplendent, bright plumage and a tail, or more specifically, two tail feathers which are as long as, and indeed sometimes longer, than the length of its body. The kingly appearance of the exotic quetzal succeeded in charming the designers of the Italian brand Sicis, who last year at their exhibition in Basel presented impressive new rings with the same name. Now they have extended the collection with a necklace…

Following the unexpected success of the Quetzal rings, which were released in two different coloured editions, green and purple, the logical next step for the jewellery line was to create a striking and eye-catching piece of neck jewellery. This left the designers of SICIS with the tricky task of creating a piece of jewellery for their clients which could convey the beauty of the quetzal’s extravagant plumage while recreating the lightweight airiness of its feathers at the same time. 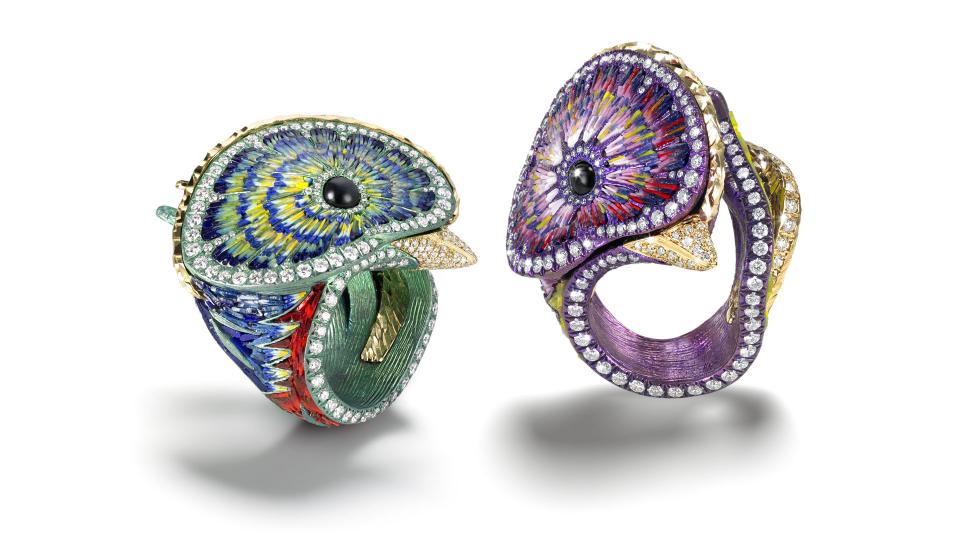 In order to keep the weight of the finished article to the bare minimum, the designers have used two metals: gold – both white and enamelled yellow gold – and, as with the ring, one of the lightest metals available, titanium (which was used for the quetzal’s head). Working with titanium can be difficult because of its mallability properties, which obviously complicated the process of building the body of the necklace and increased the amount of time required. But it was worth it, and the finished bird is a much lighter element than it would have been had it been made completely out of gold.

When it came to achieving a lightweight look, the designers went for a winning combination of light, long and delicate decorative elements. So you have, for example, long tail quills made from multi-coloured micro mosaic particles, which create a smooth curve that follows the contours of the neck; or the half flower made from beautiful pear-cut tanzanites placed at the base of the necklace, offsetting the solid round head of the bird, the largest part of the necklace, and adding an airiness to the ensemble.

SICIS is one of just a few companies in Italy and worldwide who employ the technique of micro mosaic to a high level. Having perfected the technique, the brand’s designers made it a company signature, and micro mosaic now features in all of Sicis’s work from their jewellery to their watches, and the Quetzal necklace is no exception. The stylish multi-coloured design made up of tiny ceramic tiles took more than 100 hours to create; while the whole necklace took several months.

To dilute the quetzal’s vivid colours, Sicis have added streaks of 15.11 cts of diamonds and 10.15 cts of tanzanites, the finishing touch on their surreal interpretation of this Central American bird, a piece of jewellery just as exotic as the real thing. 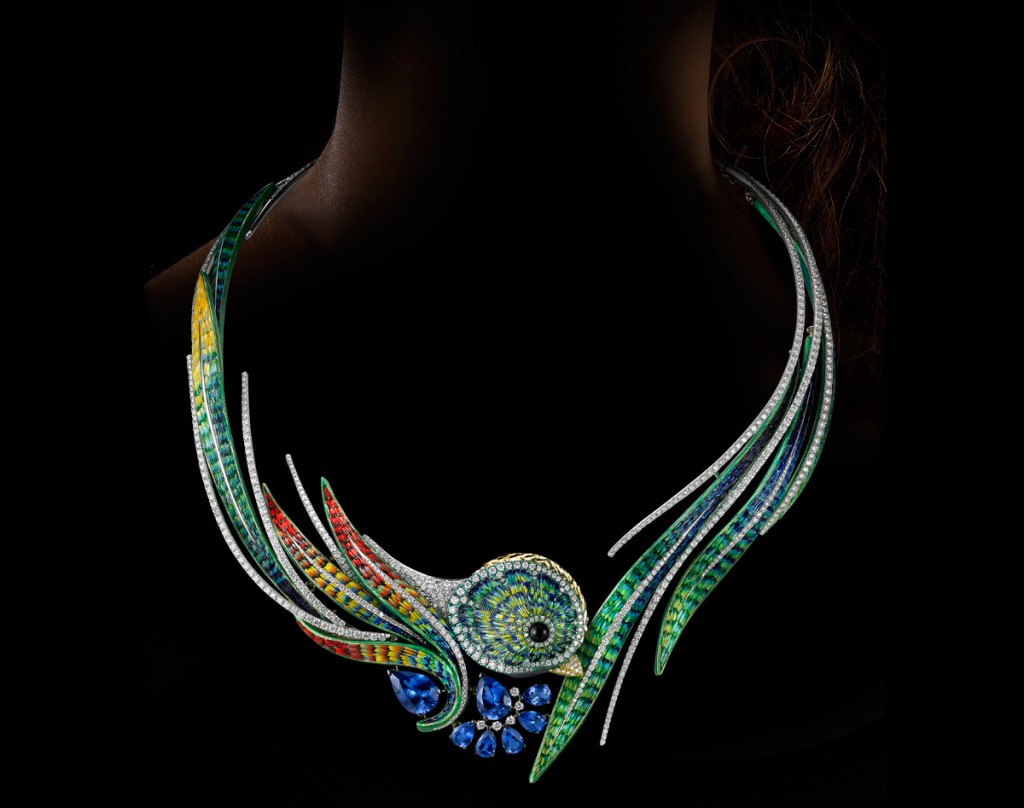