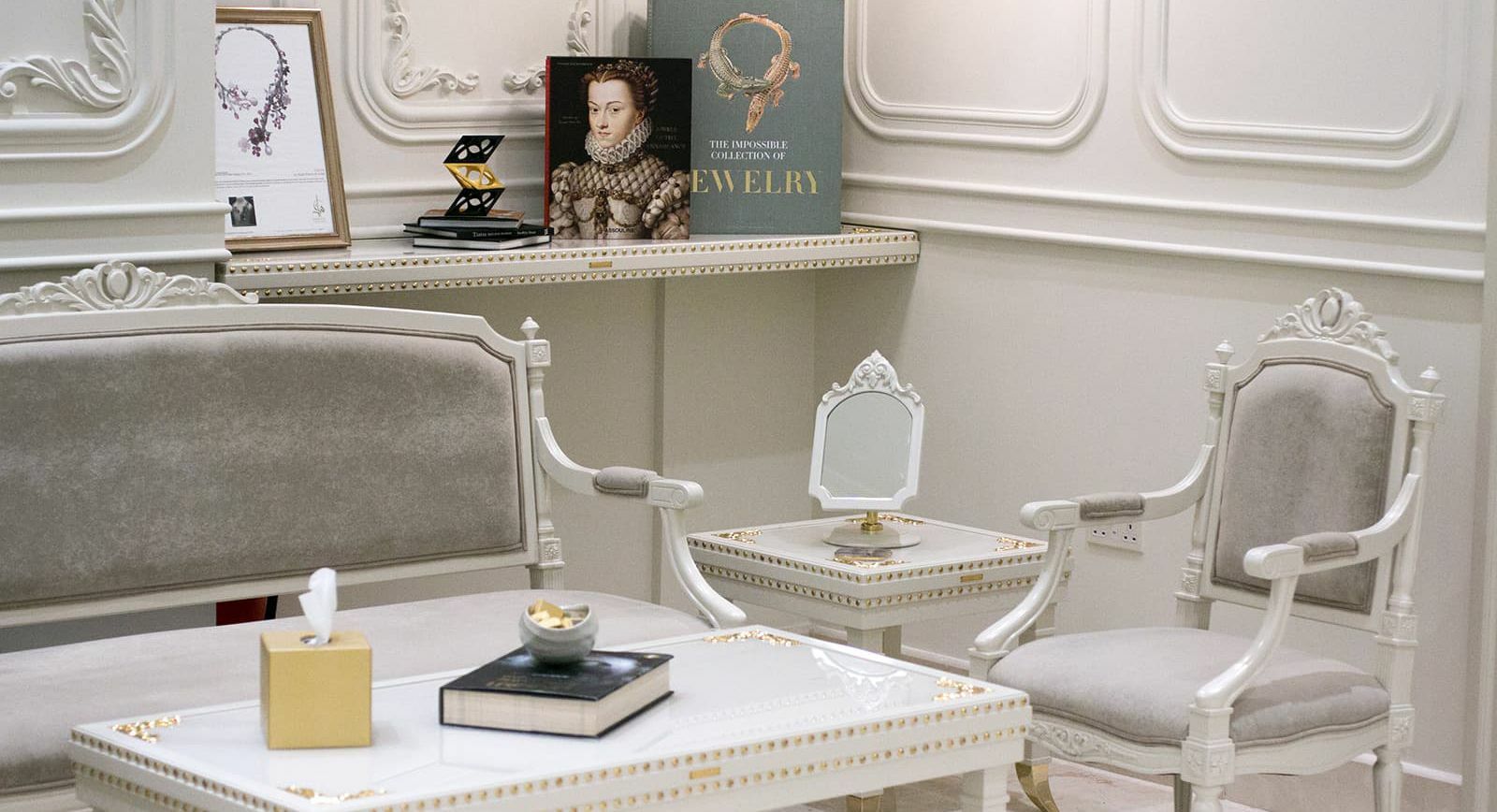 About five years ago, I came across a luxurious necklace that kept popping up in my Instagram feed. It was made in the form of a blooming cherry blossom branch - Sakura - and embellished with tourmalines, quartz, diamonds and pearls. I was so enamoured by the jewel and pleasantly surprised to find out that it was not a design of a famous jeweller from Italy or France as one would expect, but a masterpiece by a “rising star” of the jewellery world from Qatar: Nada Khamis Mohammed Al-Sulaiti. Nada founded her own brand Hairaat in 2011, and a couple of months ago opened her own boutique at the Gate Mall in Doha, which I was lucky enough to visit in February.

The idea behind  Nada’s designs is to combine the culture of the West (the designer lived in London for a year) and the Arab World  (especially the stylistic elements of the Arabian Gulf) in her exquisite creations. I should at this point note that her work differs vastly from traditional Middle Eastern gold jewellery. Pieces that bear Hairaat hallmark are less grad and are created taking into account trends in contemporary fashion. Nada’s unique pieces and permanent collections are often decorated with coloured gemstones – and not just the three most famous ones. She favours lemon quartz, opals, watermelon tourmalines, turquoise, dyed quartz and even carved pearls that can be found in her jewellery. 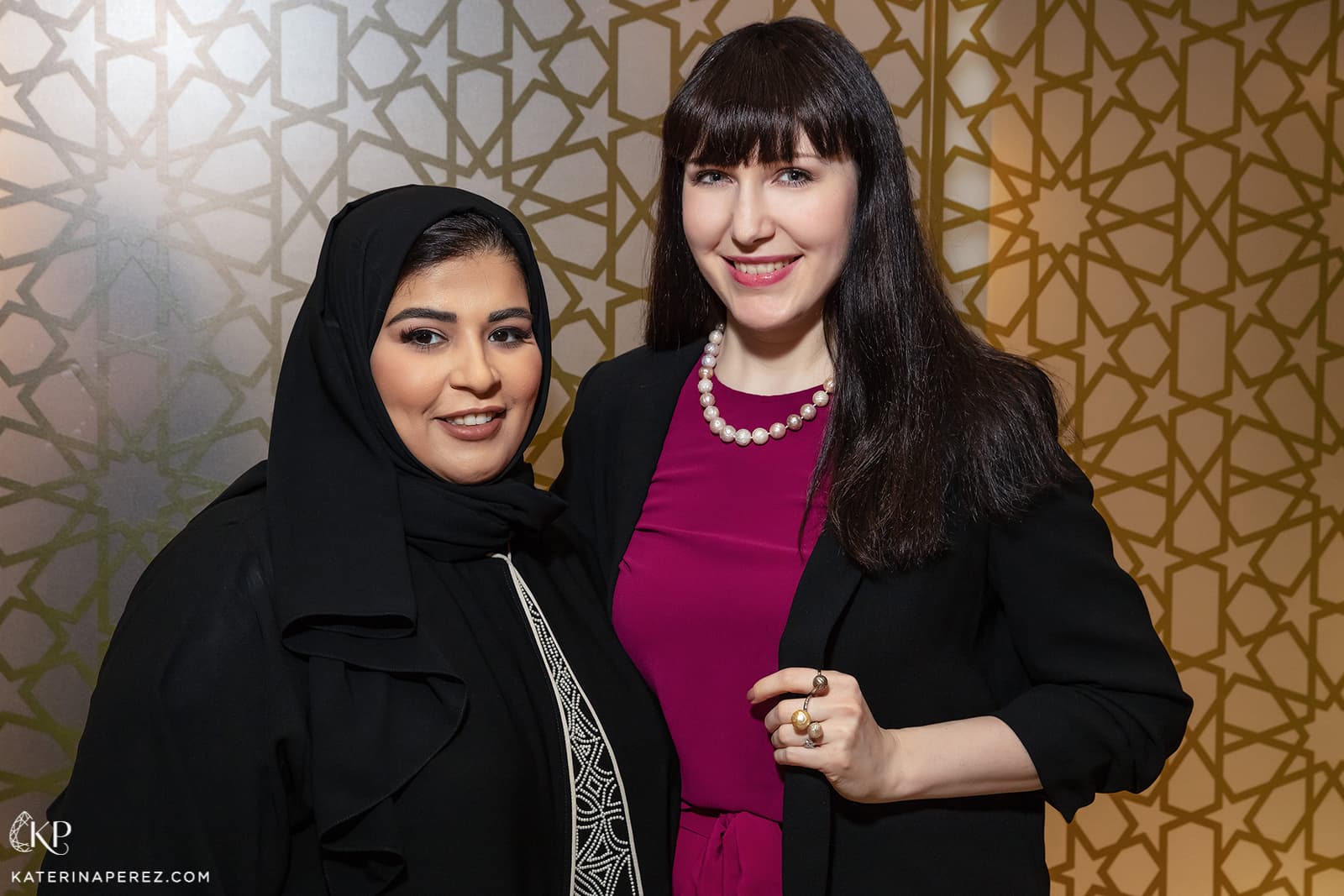 During our meeting in Doha, Nada fondly shared her memories with me of how she got to where she is today. "I have loved jewellery since I was young – a passion which perhaps originated when I first saw my mother buy and collect jewellery. Later, I took my interest further, reading up extensively on the subject. I first carved wax in summer school at the age of 18 and later graduated from the Diamond, gemstones and Pearls grading courses, along with my sister. While living in London I attended courses at Central Saint Martins and Christie's – these helped me a lot with meeting the right people”. 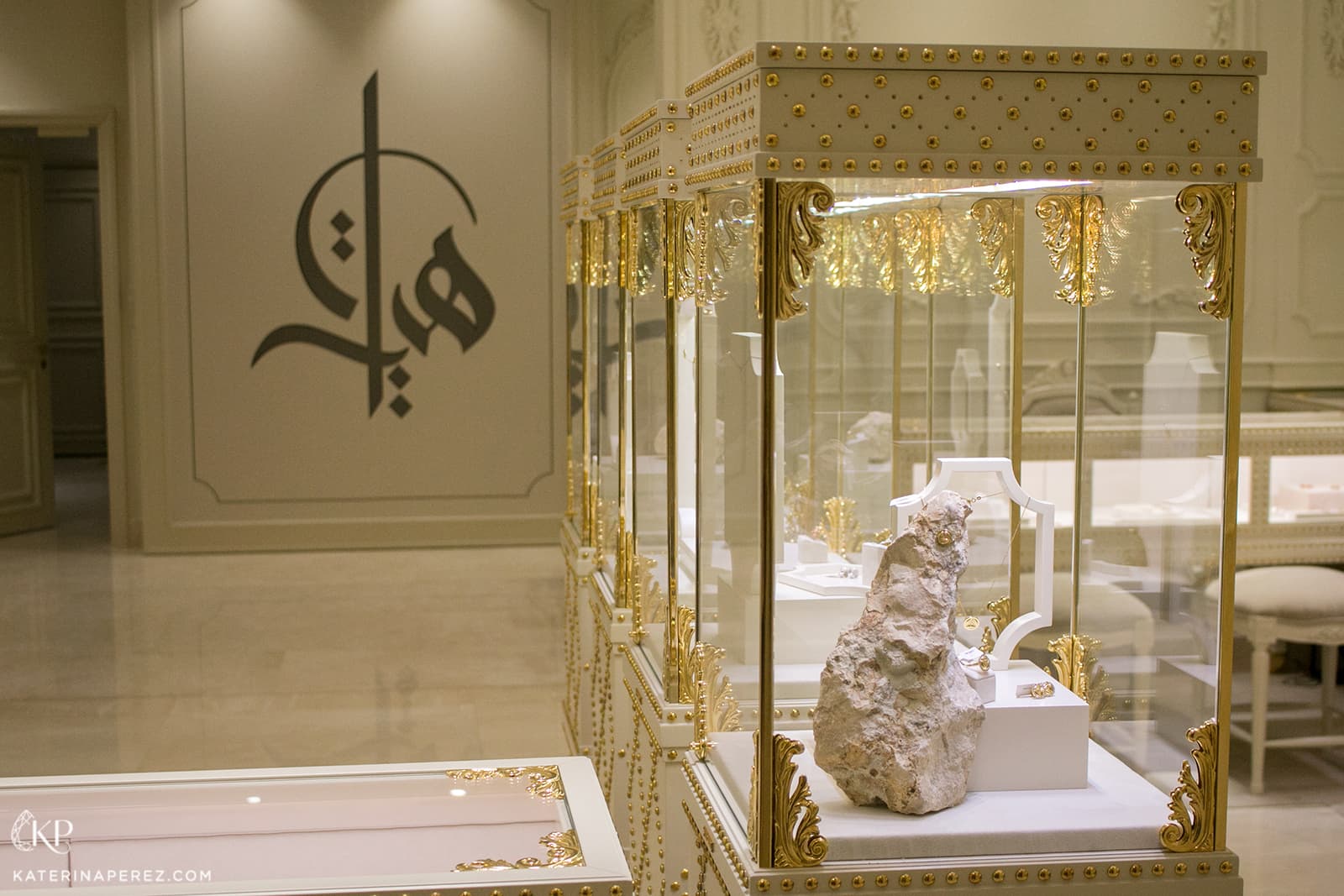 From our conversation with Nada, I also learned that when she was young she attended a school of applied art. This undoubtedly helped her develop a taste and understanding of the aesthetics of design from a young age. This inner sense of beauty not only helps Nada in creating her own jewellery but has also evidently played an important role in the broader design of the first Hairaat boutique. In devising the decor, Nada remained true to her aesthetic ideals – combining decorative elements from the architecture of Europe as well as her native Qatar in one space. This has resulted in a boutique with lavish decoration, that included some of the very best traditions of The Arabian Gulf architecture. 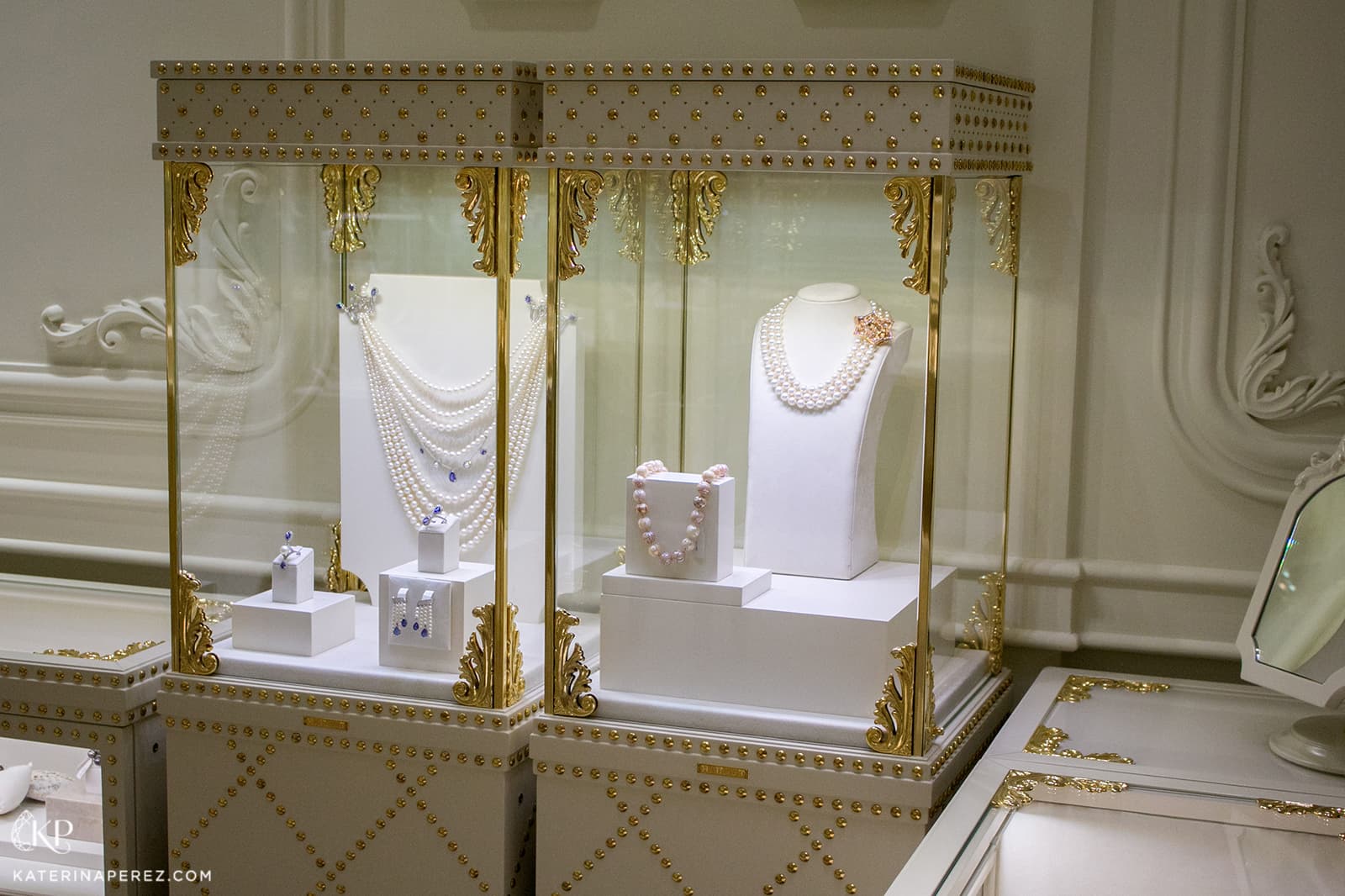 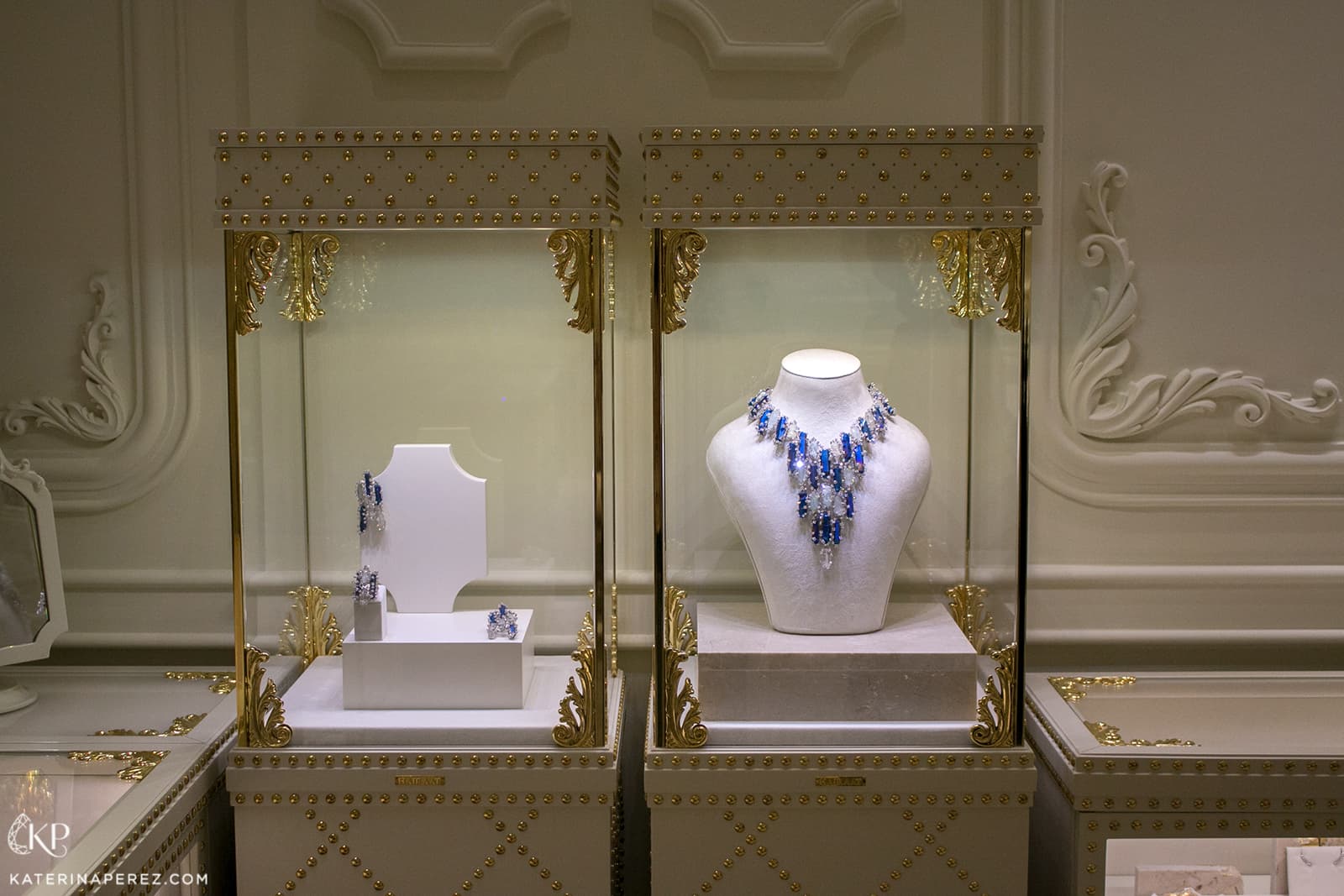 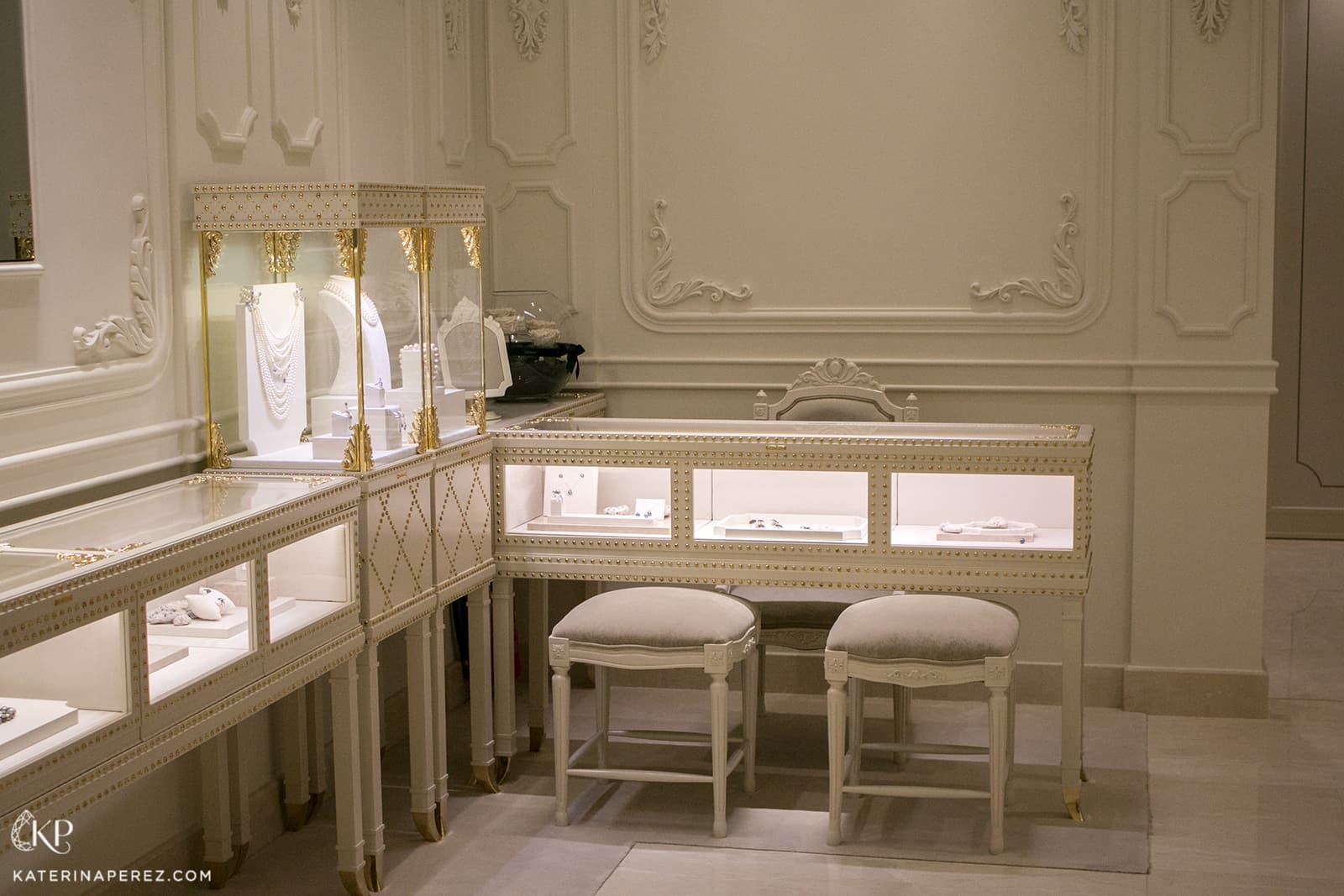 “We chose the interior to incorporate elements of French design. If you look around the boutique, you will notice its strong resemblance to a French salon. For example, the walls feature panels typical of Ottoman type apartments in Paris, but a similar style of décor can also be found in the interiors of my own country. The beige colours, as well as the gold-plated elements – like the 18000 studs outlining the window displays – are reminiscent of the beaches here in Qatar,” says Nada, as we marvel at the display windows in the main salon. 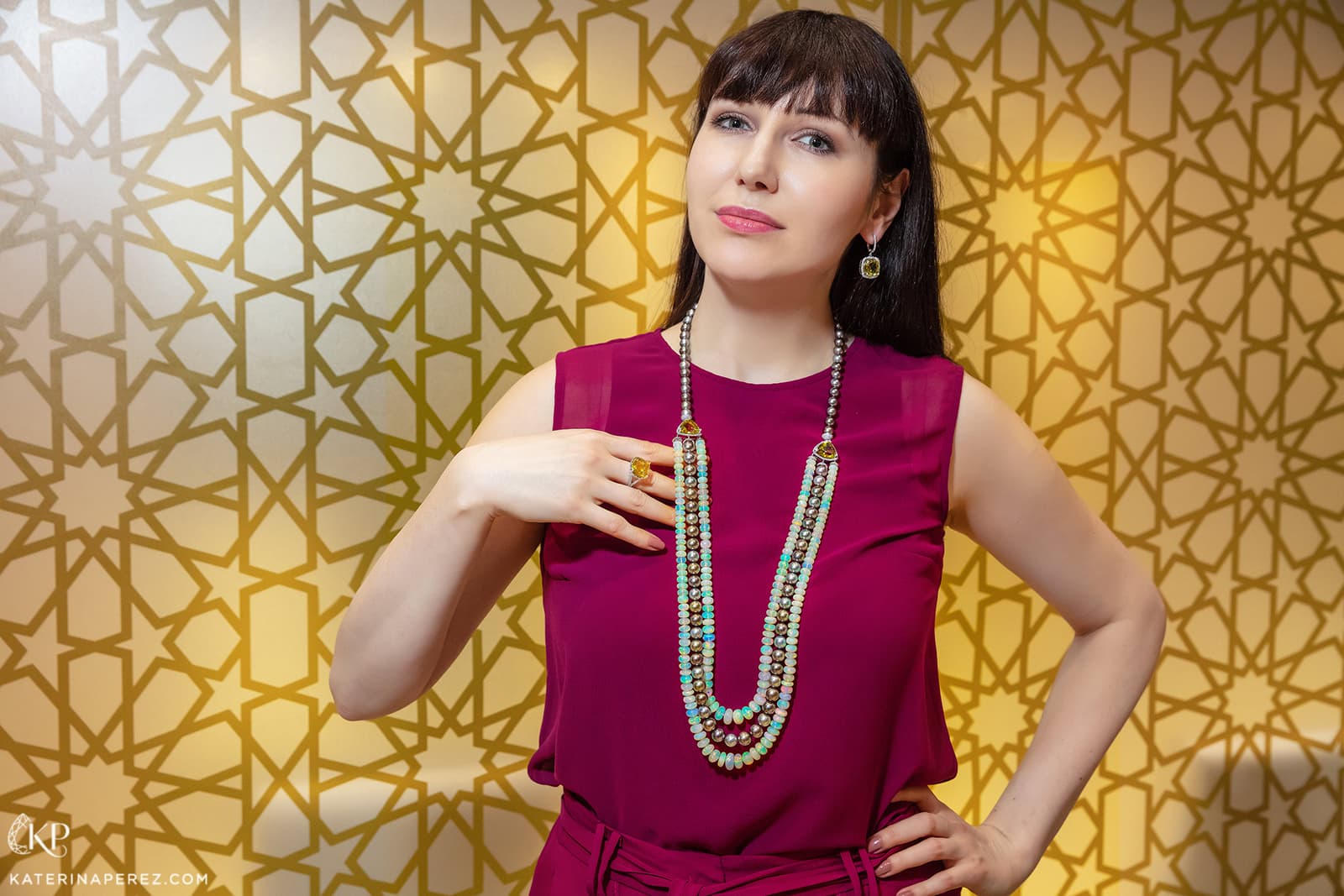 The cosy boutique is divided into three parts: the main retail area, a semi-private room, and closed space for VIP guests, located at the very end of the boutique and parallel to the office wing. Both exquisite pieces, created in a single edition, as well as permanent collections, are displayed in cases that catch the eye as soon as one walks in through the entrance of the Hairaat boutique. On the right one finds displays with unique necklaces, earrings and rings as well as the iconic Al Jassassiya collection, and coins in Naira pendants. On the left one finds stunning jewellery with carved pearls and gold jewellery for everyday wear, entitled Al Zubarah. 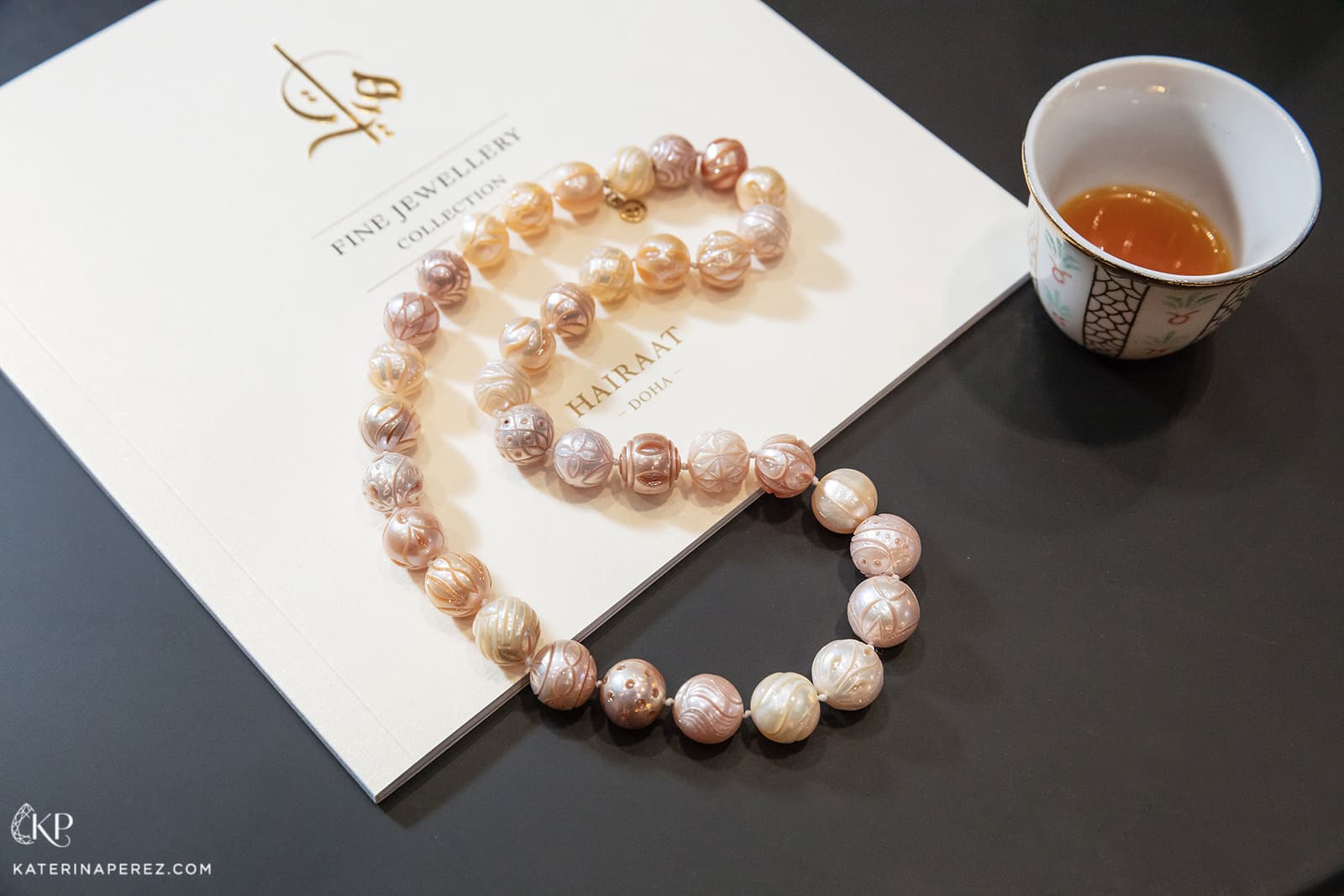 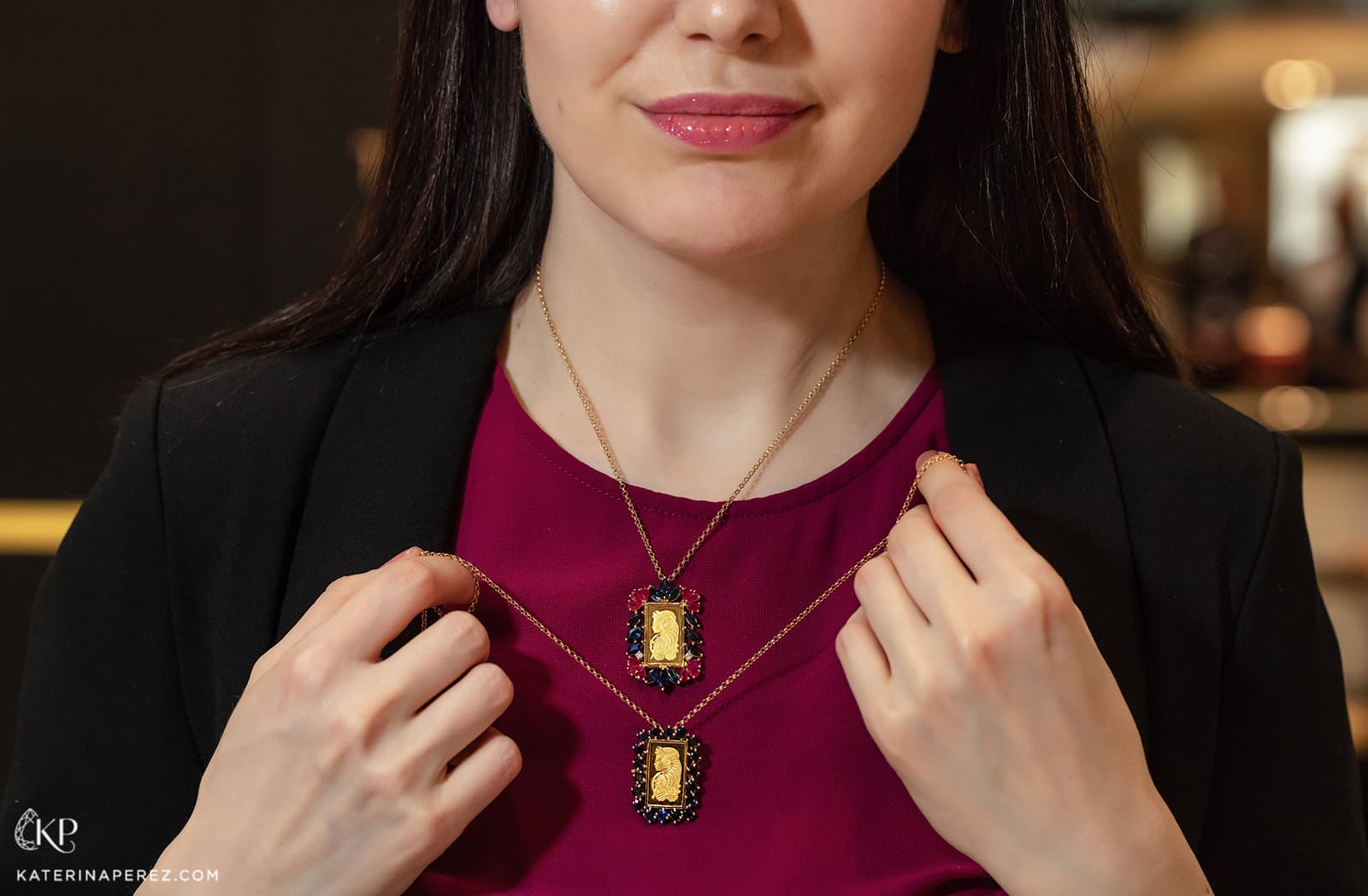 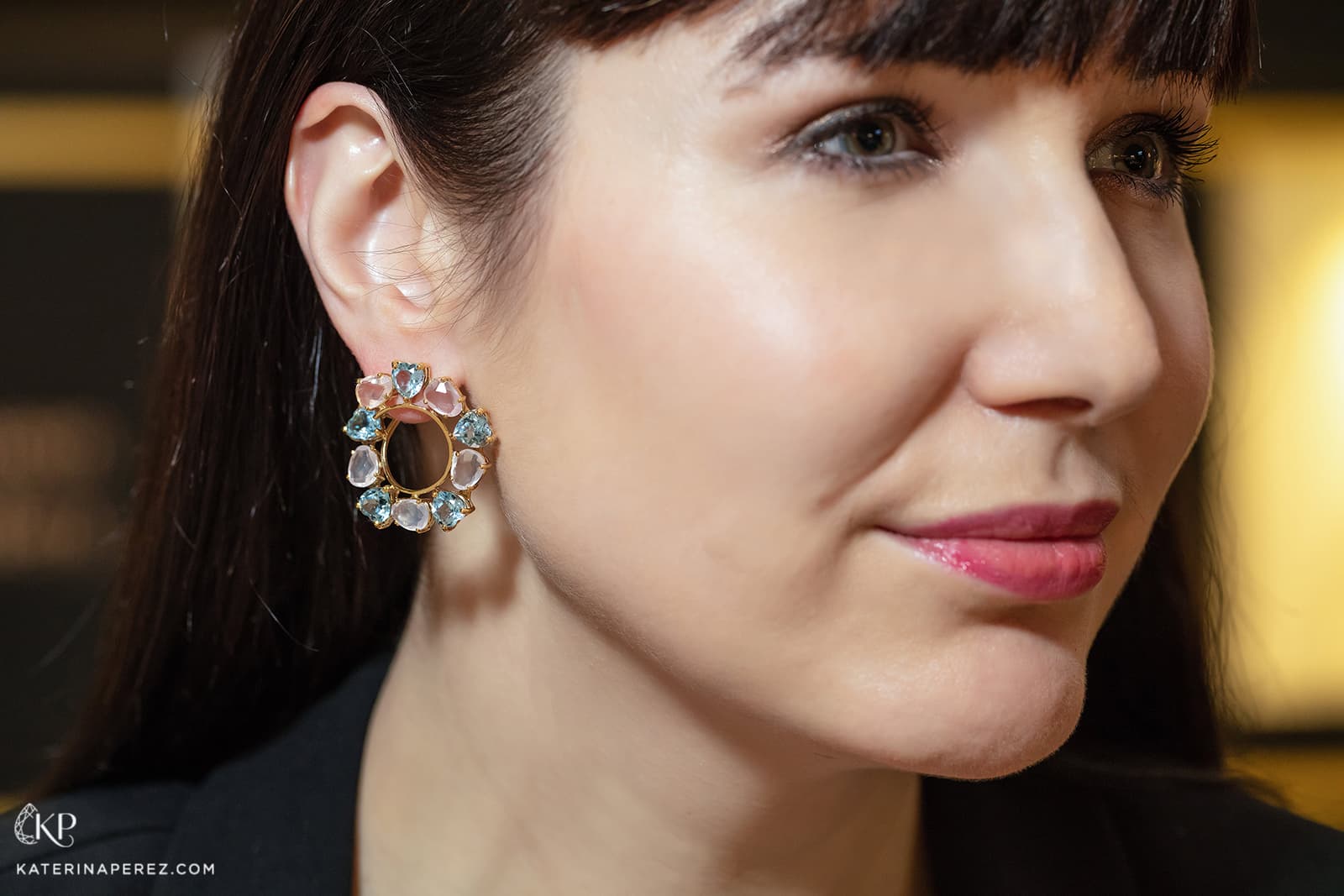 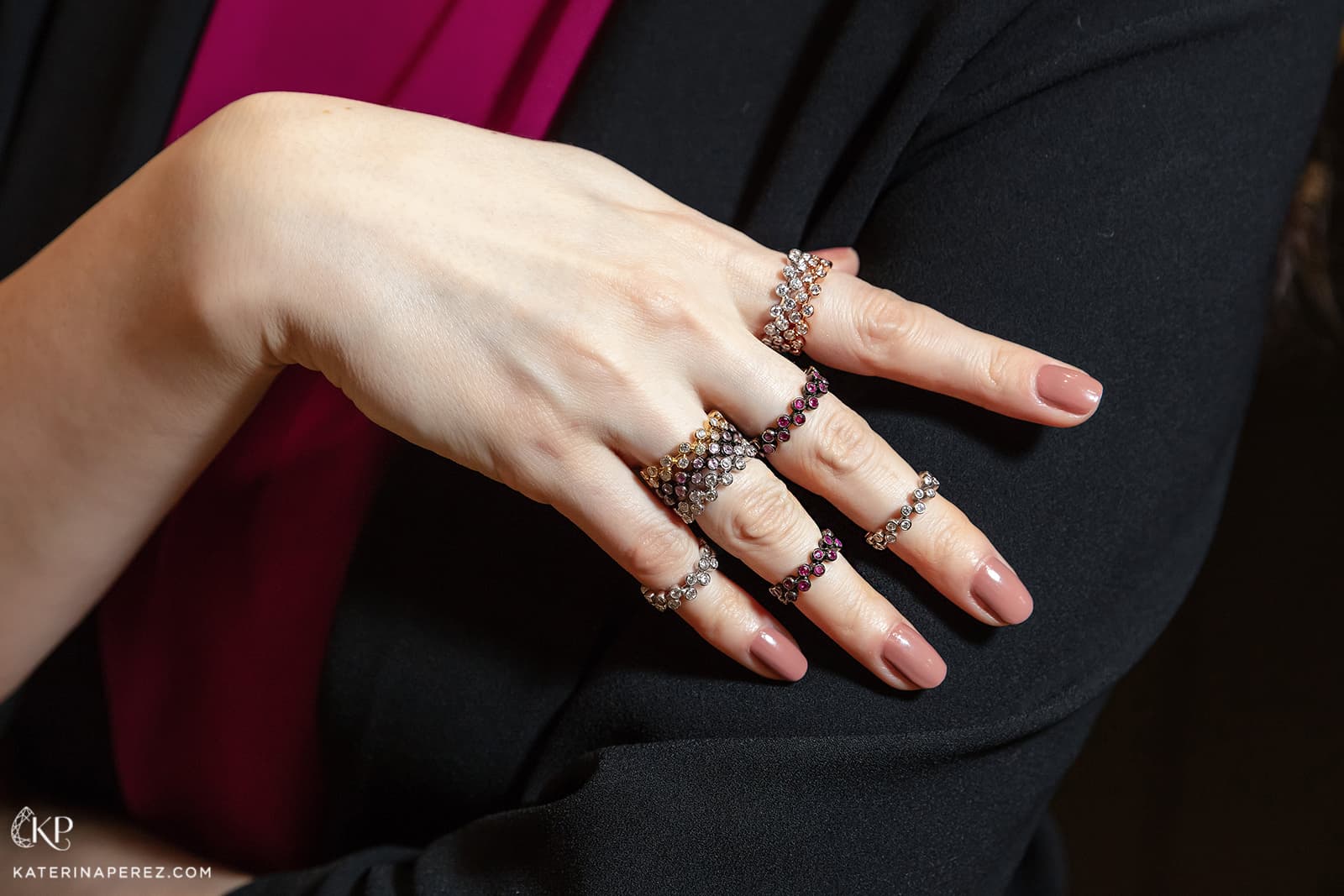 "The main salon is divided into two areas: one represents the desert and one represents the sea. Some displays have natural beach stones placed inside for decorative purposes or as props to represent the theme. In the seaside part of the salon, one sees a lot of pearls and everyday pieces, while the desert side of the salon is dedicated to our Signature Collection,” Nada explains. 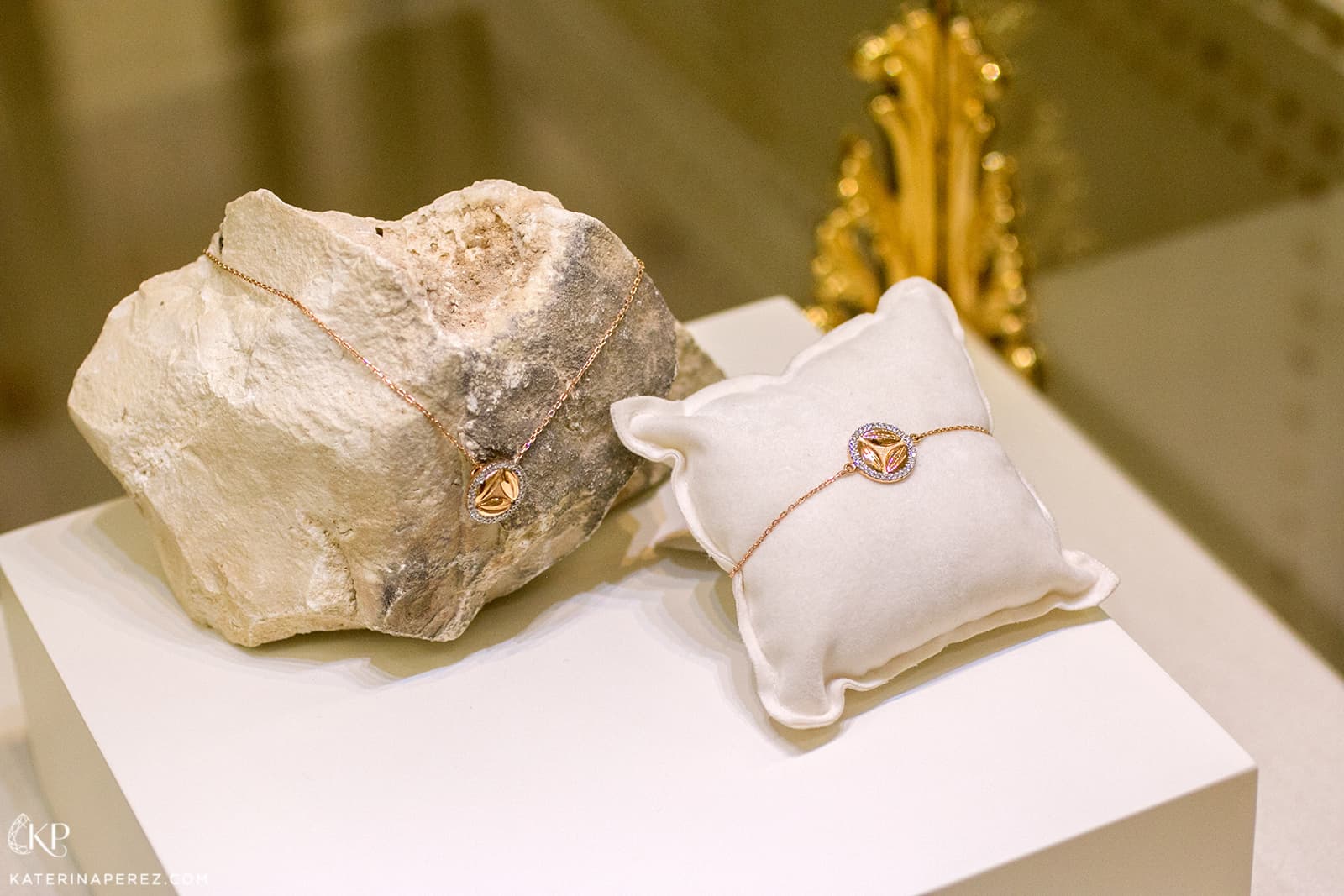 During the interview, we sat in a semi-private area, and I noticed a photograph of the Sakura necklace, which I mentioned at the beginning of the article. It turned out it received two awards one in 2015 it the A’Design Awards Competition gold award in the “Jewellery, Glasses and Watches” and in 2017 it the International Jewellery Design Excellence Award the necklace received the Merit Award. I should note now that this is far from the only design prize Nada has won. 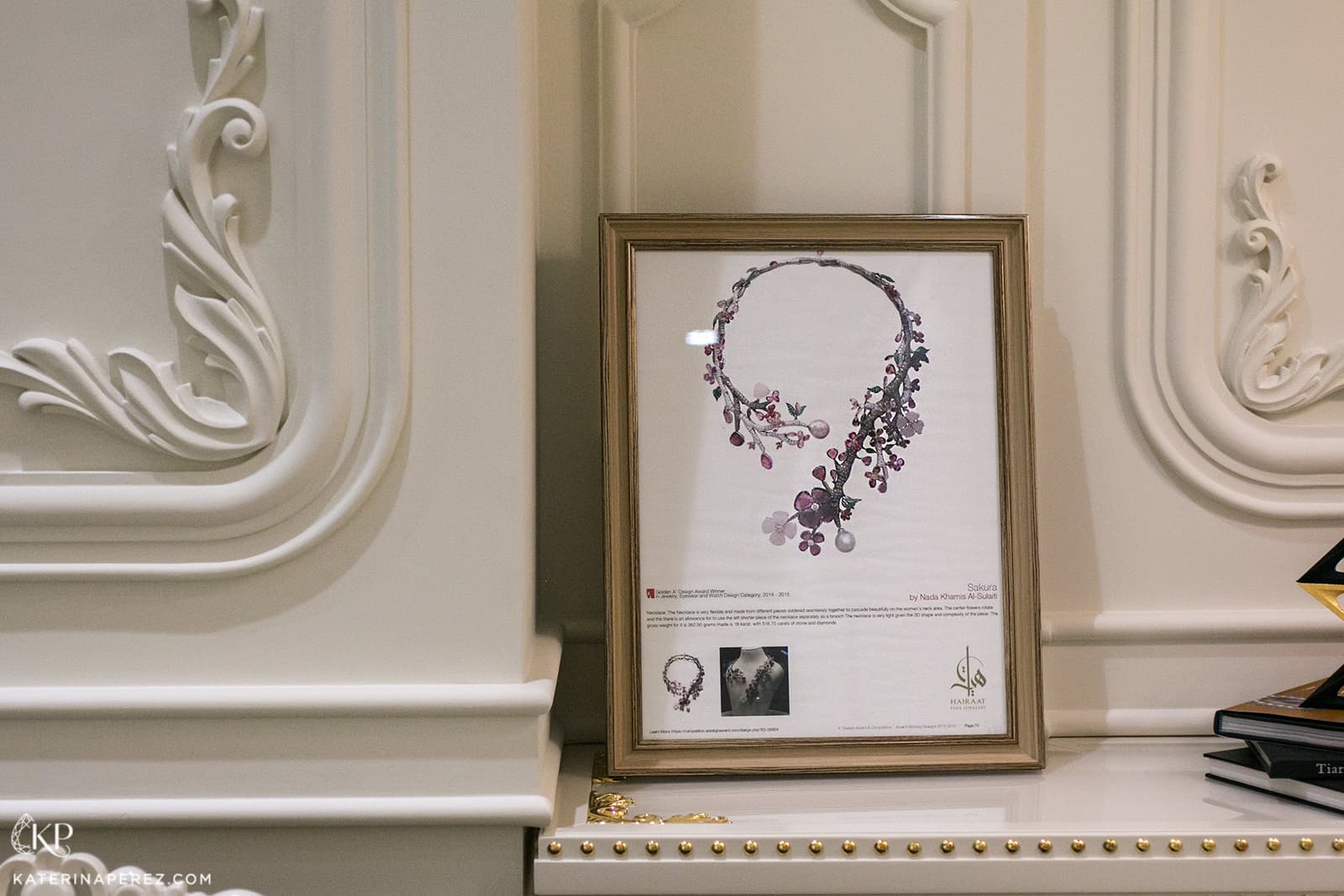 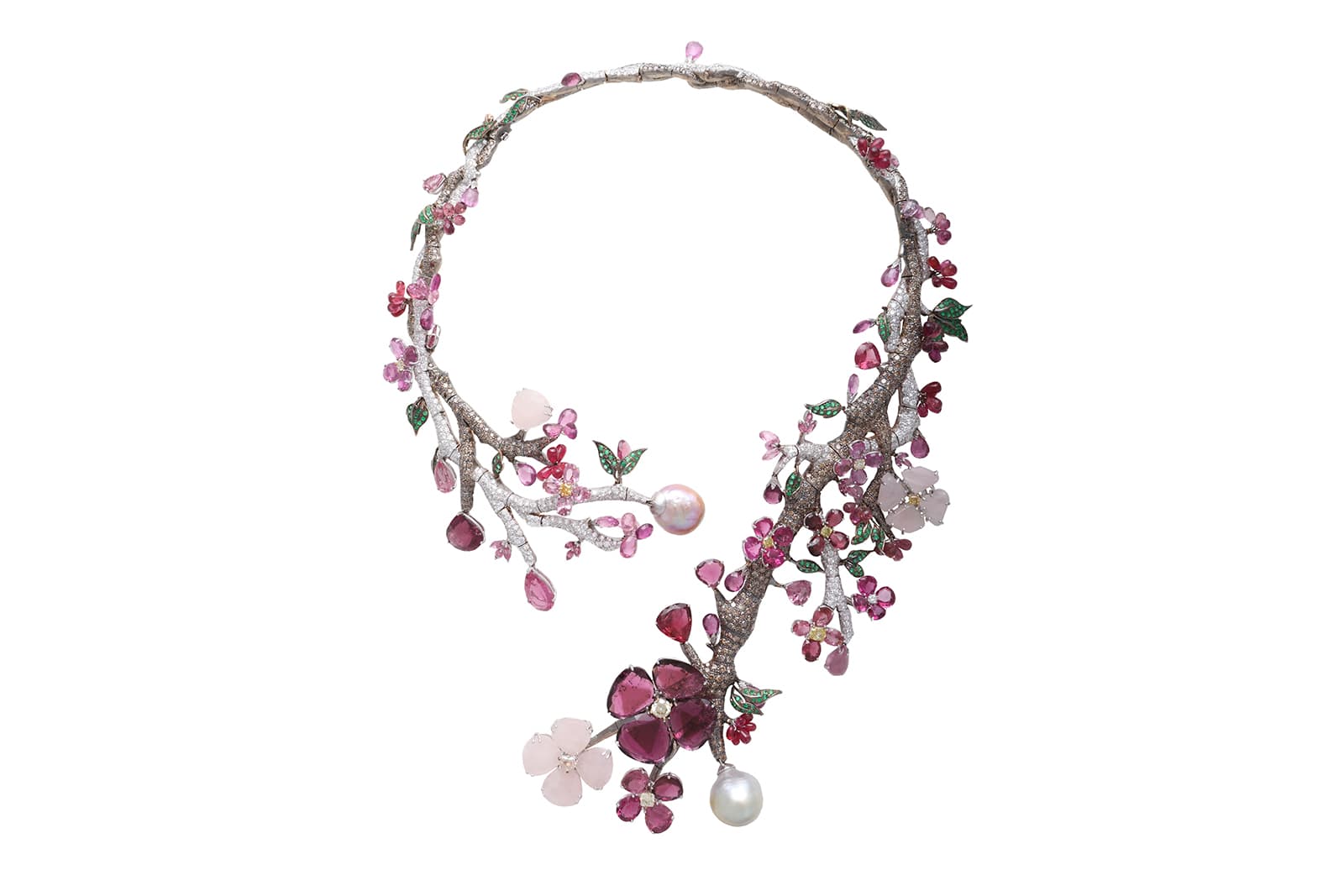 Sakura was in fact created specifically for the wedding of the jeweller’s sister and it made a splash among the guests, to say the least. A necklace with tourmaline slices and pearls with a detachable flower – that can be worn as a brooch – is a long way from traditional Qatari bridal wear. At that point, this bold design became Nada’s statement to the whole world that she was not going to be just another conventional jeweller. Nada has always sought to design creative jewellery from non-traditional materials, which she still does today. But readers, you will have to wait for my next article to hear of the details of her most exciting pieces.

SPECIAL THANKS: HAIRAAT FOR SPONSORING THIS ARTICLE